Volatility back in the 11s

After the spike higher yesterday, the VIX has indeed returned from whence it came! With the indexes closing slightly higher, the VIX closed -3.6% @ 11.83 It remains a fearless market, with utterly zero concern for any of the near..or long term issues. 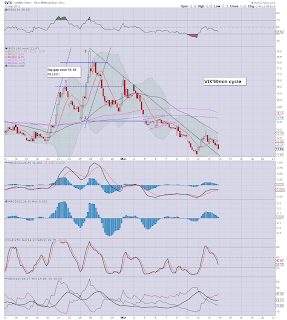 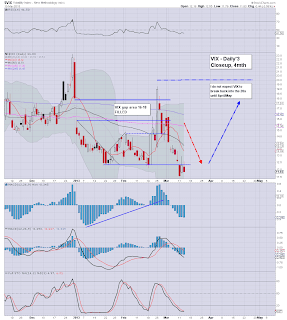 As I had expected, the VIX spike yesterday was nothing more than another little tease to the bears.

How many were piling into TVIX, UVXY, and VXX yesterday, and are now sitting on rather significant losses, after just a single day?
--

VIX looks set to be choppy in the 12-10 zone until the main indexes max out, which seems likely to occur towards the end of next week.
-

The main indexes close slightly higher, with the VIX back in the 11s. The USD was most notable aspect of the day, briefly breaking into the 83s. Oil recovered some of the earlier declines, but the metals closed near the lows. 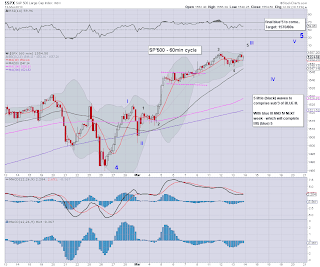 From a 'count' perspective. My best guess is we're in the last tiny wave of what have been a very significant wave'3.

This fifth little wave will very likely complete tomorrow or Friday..somewhere in the sp'1565/75 zone.

That probably will take the market into next Wed/Thursday.

So...those seeking an index re-short/ VIX long, should probably be waiting until the latter part of next week.

I certainly will be waiting until that time..and then re-assess.
-

the usual bits and pieces across the evening.
Posted by Trading Sunset at 20:02:00
Email ThisBlogThis!Share to TwitterShare to FacebookShare to Pinterest

The main indexes are holding slight gains. The USD is still holding reasonable gains, and did indeed break into the 83s earlier.  Oil and the metals trying to recover from earlier declines.  VIX could easily close back in the 11s. 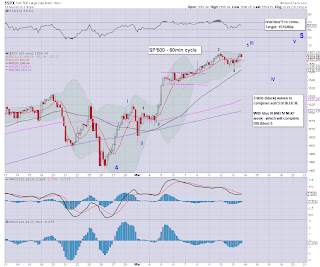 Suffice to say..market is now on hold..as many have eyes on the world news feeds.
---

*still holding SLV and USO, the latter of which is doing pretty well. Both look viable for gaps higher at the Thursday open.

back at the close
Posted by Trading Sunset at 18:44:00
Email ThisBlogThis!Share to TwitterShare to FacebookShare to Pinterest

2pm update - back to green

Once again we're seeing the usual latter day recovery/ramp. The sp'1560s are possible even by the close of today, which would doubtless annoy a great many doomer bears. USD is cooling down a little...which is helping both Oil and the metals jump back upward. 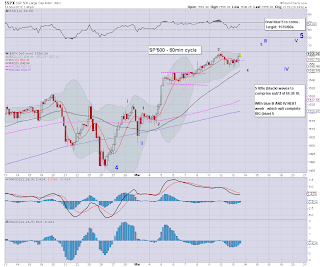 Hourly charts indeed threatening major upside, all the way into the weekend.

Two big POMOs due, and its opex, in my experience, this is a field of landmines for the bears.
--

*I am currently long via SLV and USO. I managed to catch both near the lows earlier today, I might exit at the close of today.

--
back at 3pm
Posted by Trading Sunset at 17:49:00
Email ThisBlogThis!Share to TwitterShare to FacebookShare to Pinterest

The main indexes are a touch lower, but it remains all noise. The hourly cycles are possibly fully reset, and offer significant upside potential all the way into the Friday close. Oil is back to flat after earlier gains, with the metals seeing a snap lower in the mid morning. 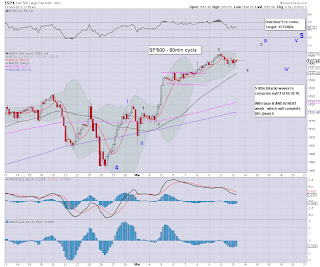 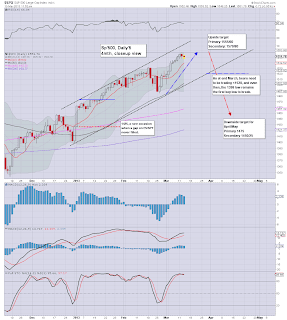 The bears should be very concerned with the hourly MACD (blue bar histogram) cycle. Its now pretty low, and with two big POMO days to come this week, and it being opex, I think the 1560s are still very viable by the Friday close.

I been closely watching Oil and the precious metals all morning....

*I went re-long Silver 20mins ago, still seeking SLV in the low 29s, that a good $1 upside across the next few days. 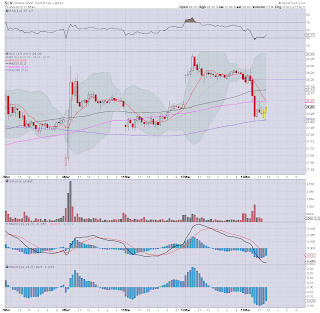 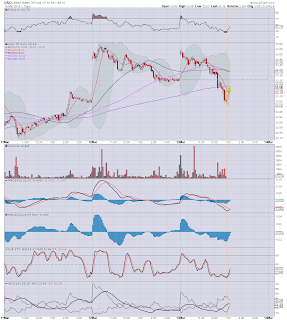 back at 2pm
Posted by Trading Sunset at 15:56:00
Email ThisBlogThis!Share to TwitterShare to FacebookShare to Pinterest

The indexes are still showing weakness, and we are close to taking out yesterdays low. Notable so far today, USD is making a run for the 83s, but this is not stopping Oil rising. Metals are a bit twitchy. 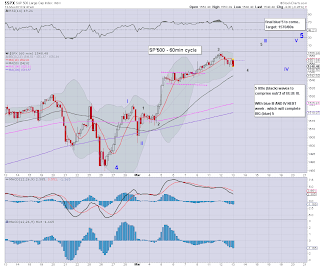 This morning could merely be a the end of 'black' 4 lower..with 5 UP to take us into the weekend.

I sure won't be trying to chase this market lower.

The daily cycles are warning of possible downside, but there is absolutely NO decent bearish signals yet.
--

I am watching Silver and Oil. I sure won't be chasing them higher. If they don't pull back,..I'll sit today out!
Posted by Trading Sunset at 13:49:00
Email ThisBlogThis!Share to TwitterShare to FacebookShare to Pinterest

The main indexes saw a touch of weakness today, but the near term trend remains higher. The weekly charts are somewhat overbought, and we are probably no more than 1-3 weeks away from our first significant multi-week down cycle of the year. 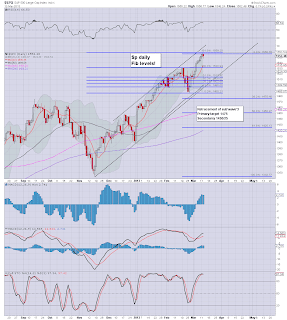 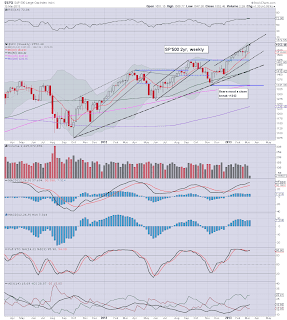 We continue to scrap along the upper channel/trend. A little burst into the 1560/70s looks viable at any time. Fib' levels still suggest 1470s as the primary downside target - which also happens to be near the old resistance highs of last September.
-- 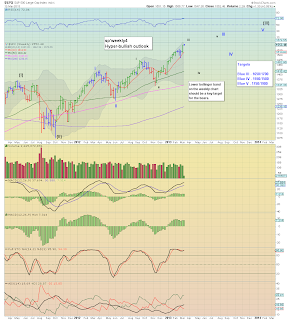 I should first note the above chart is part of a much broader outlook - one that I might fully detail this weekend  Suffice to say, its a disturbingly bullish outlook.

This outlook assumes some truly crazy price targets into 2014..and beyond. .

sp'daily4, remains a primary outlook I am still keeping in mind. 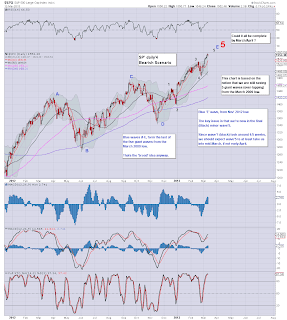 It is broadly in line with many of the other 'bearish' outlooks out there. I just wish I could have at least some faith in it.

So long as the Fed keep throwing 85bn a month at the US markets, I just can't believe that the current cycle is the 'grand top' of a four year cycle. We'll know soon enough.

We have some pieces of econ-data for the market to deal with tomorrow, primarily - retail sales. The Oil report will certainly also be important for the energy sector.

*bears should recognise its opex this Friday, and with two large POMOs on Thursday and Friday, I don't expect any significant equity weakness until next week. Even then, we might see a final small wave higher..to kick out another set of bears.

I will be looking to go long Silver and Oil in the morning....if the price action looks good.

I certainly will endeavour to remain patient, and won't be launching an index re-short /long VIX, for probably another 5-7 trading days.

The US market saw slight declines, although the Dow managed to close fractionally higher - its 8th consecutive rise. The primary trend remains upward, although we're now most certainly in overbought territory. There is no sign of a turn, and none is expected until next week. 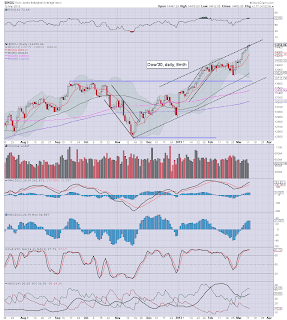 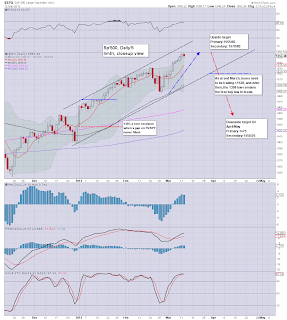 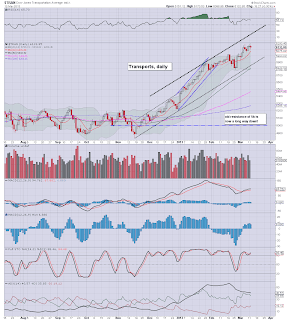 Some slight declines, but really, its nothing for the bears to get remotely excited about. The underlying trend remains comfortably higher.

The hourly charts (see earlier post) are suggestive of a few more little waves higher, with sp'1560/70s viable in the very near term.
-

A multi-week down cycle seems very likely, starting within the next 1-3 weeks.