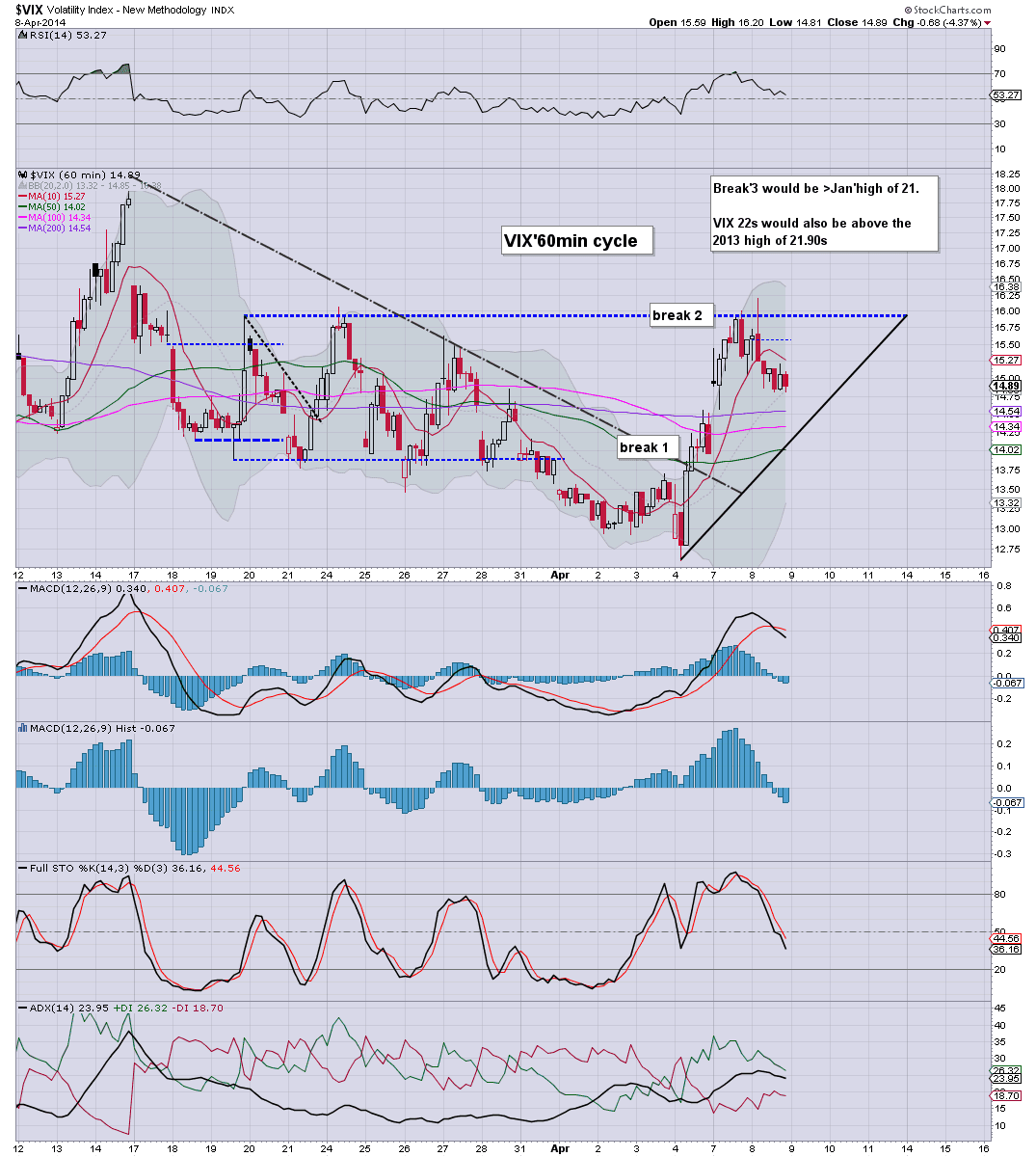 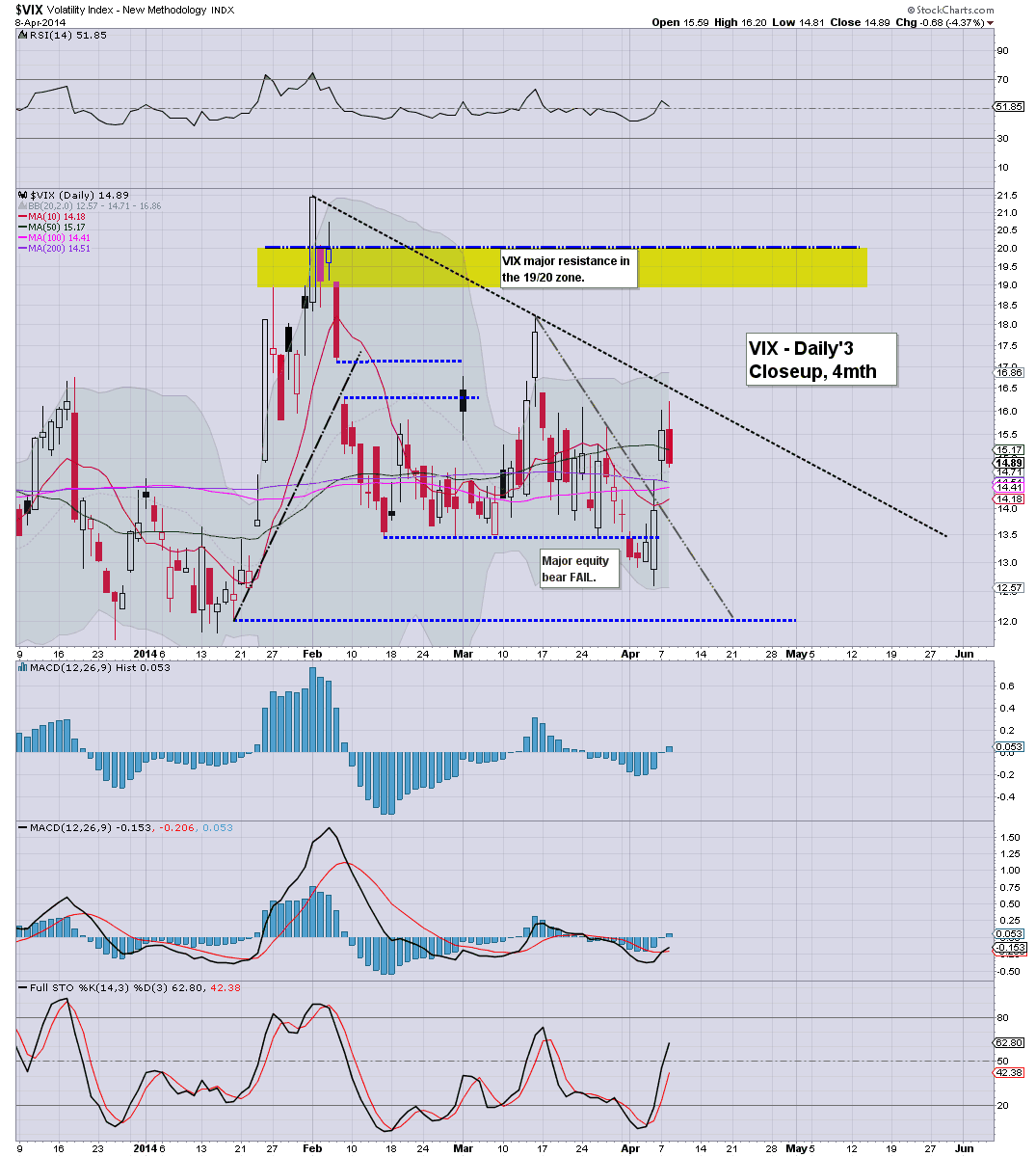 VIX should find support in the low 14s this Wednesday, along with market getting stuck in the sp'1865/75 zone.

If the market does turn lower again - whether late Wed/early Thursday, VIX has a reasonable chance of spiking into the high teens. The only issue is whether the big 20 threshold can be broken..and held above.

US indexes closed moderately higher, with the sp +6pts @ 1851.  The two leaders - Trans/R2K, settled u/c and +0.8% respectively. Outlook for Wednesday is a continued bounce, but getting stuck in the 1865/75 zone, before resuming the down trend. 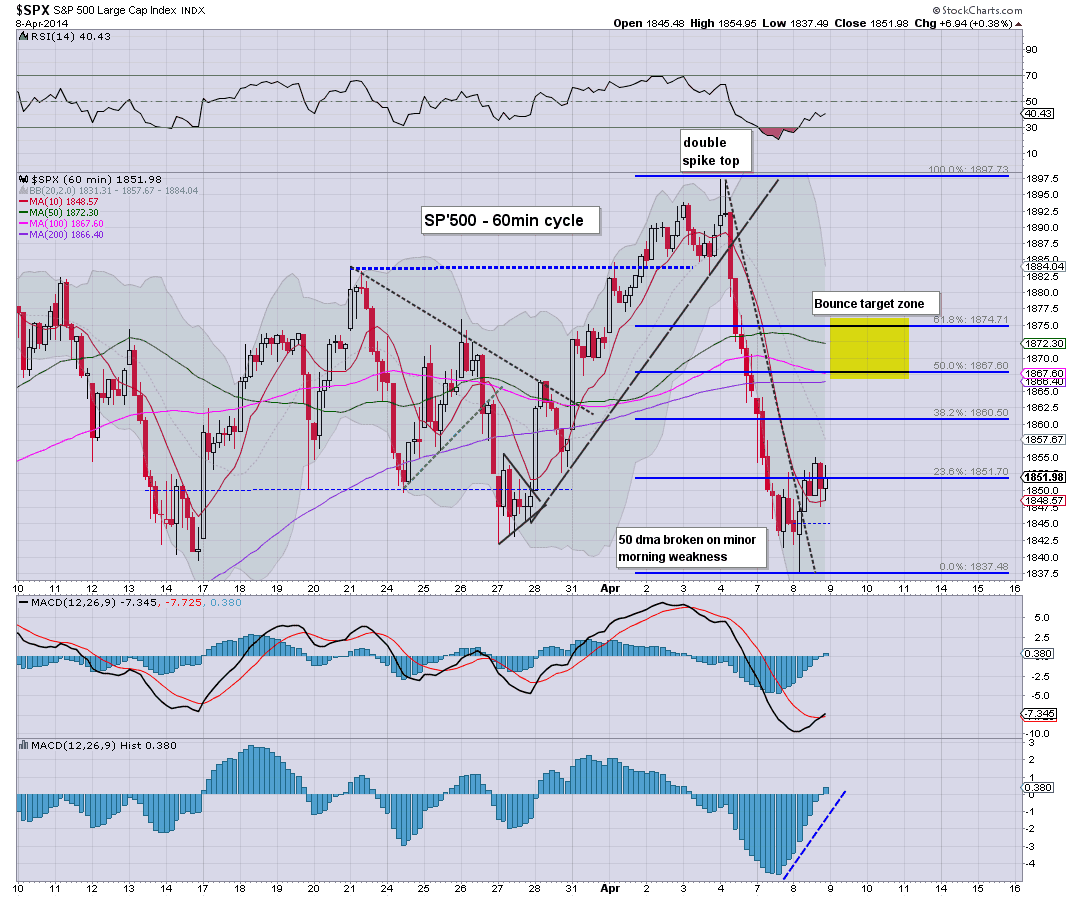 suffice to say...I'm holding to the notion that this is just a bounce.

We have seen a clear 'reversal on good jobs news' last Friday morning, and the price action across Friday-Tuesday morning was some of the most consistent weakness we've seen since late January.
-

-
more later..on the VIX
Posted by Trading Sunset at 21:03:00
Email ThisBlogThis!Share to TwitterShare to FacebookShare to Pinterest

US equities are battling to hold moderate gains into the close. The morning break of the 50 day MA to sp'1837 remains some serious technical damage. Regardless of the close, the equity bulls are losing momentum each day. Metals are holding gains, Gold +$12. 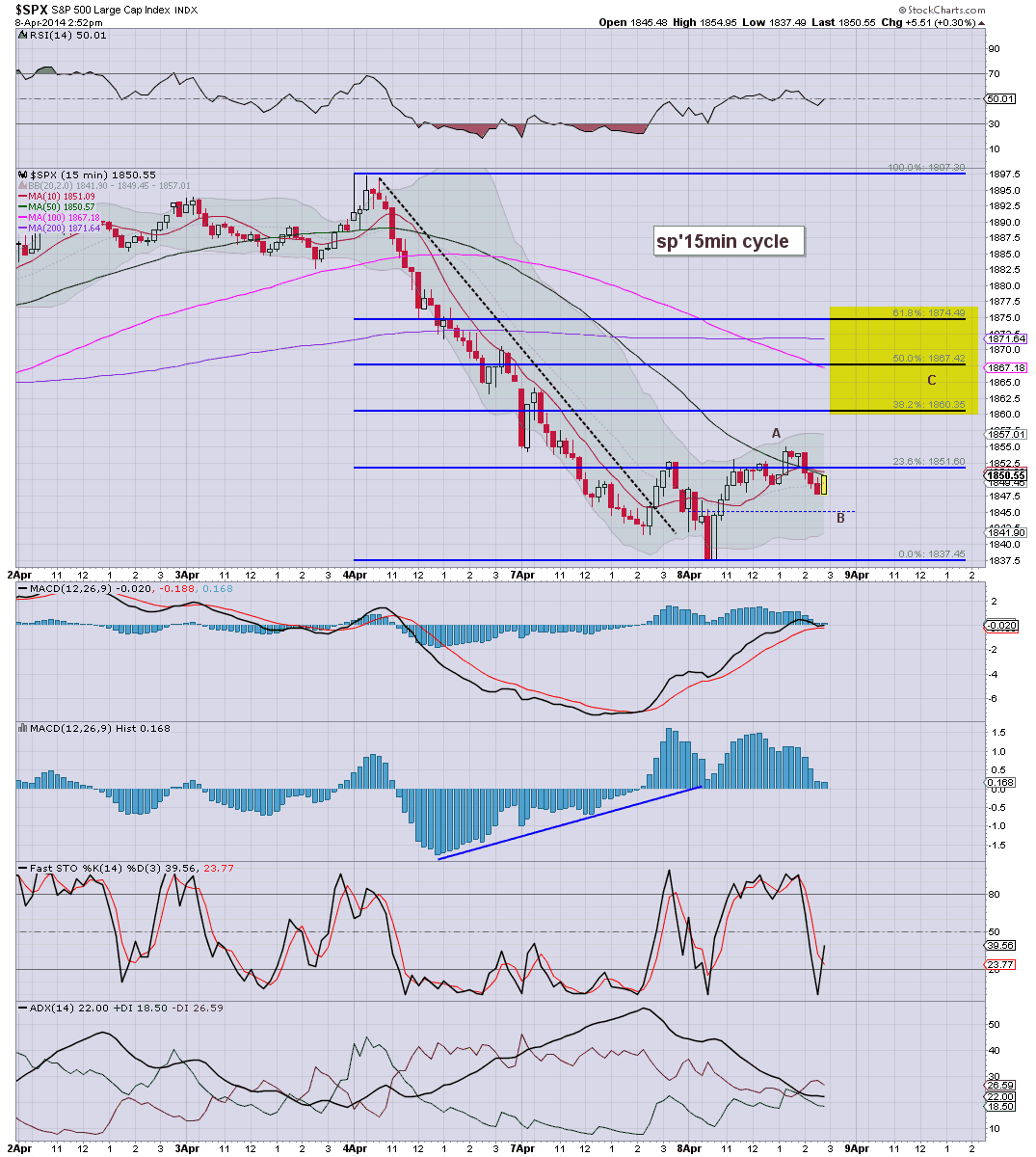 On no basis do I see indexes closing under the morning low.
--

I've labelled an ABC, but whatever you want to call it...I expect the bounce to continue into tomorrow.

3.32pm.. VIX set to close in the upper 14s.
Posted by Trading Sunset at 19:53:00
Email ThisBlogThis!Share to TwitterShare to FacebookShare to Pinterest

2pm update - a bounce, or new multi week up wave?

The ultimate question right now is whether the morning low is a key low, or whether this is just a bounce.. to be shorted. The bears has been teased so many times since Oct'2011, I am perhaps understandably 'cautious' right now. VIX sure hasn't shown any real concern in recent days. 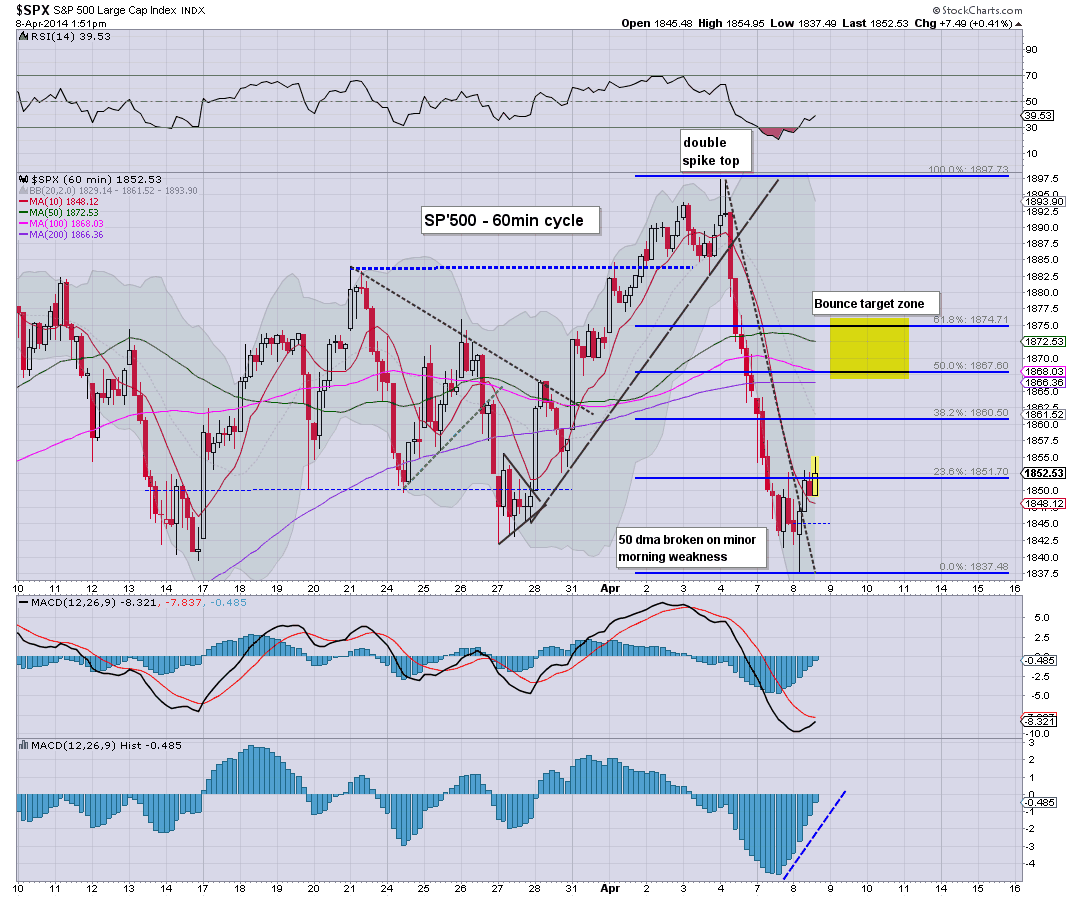 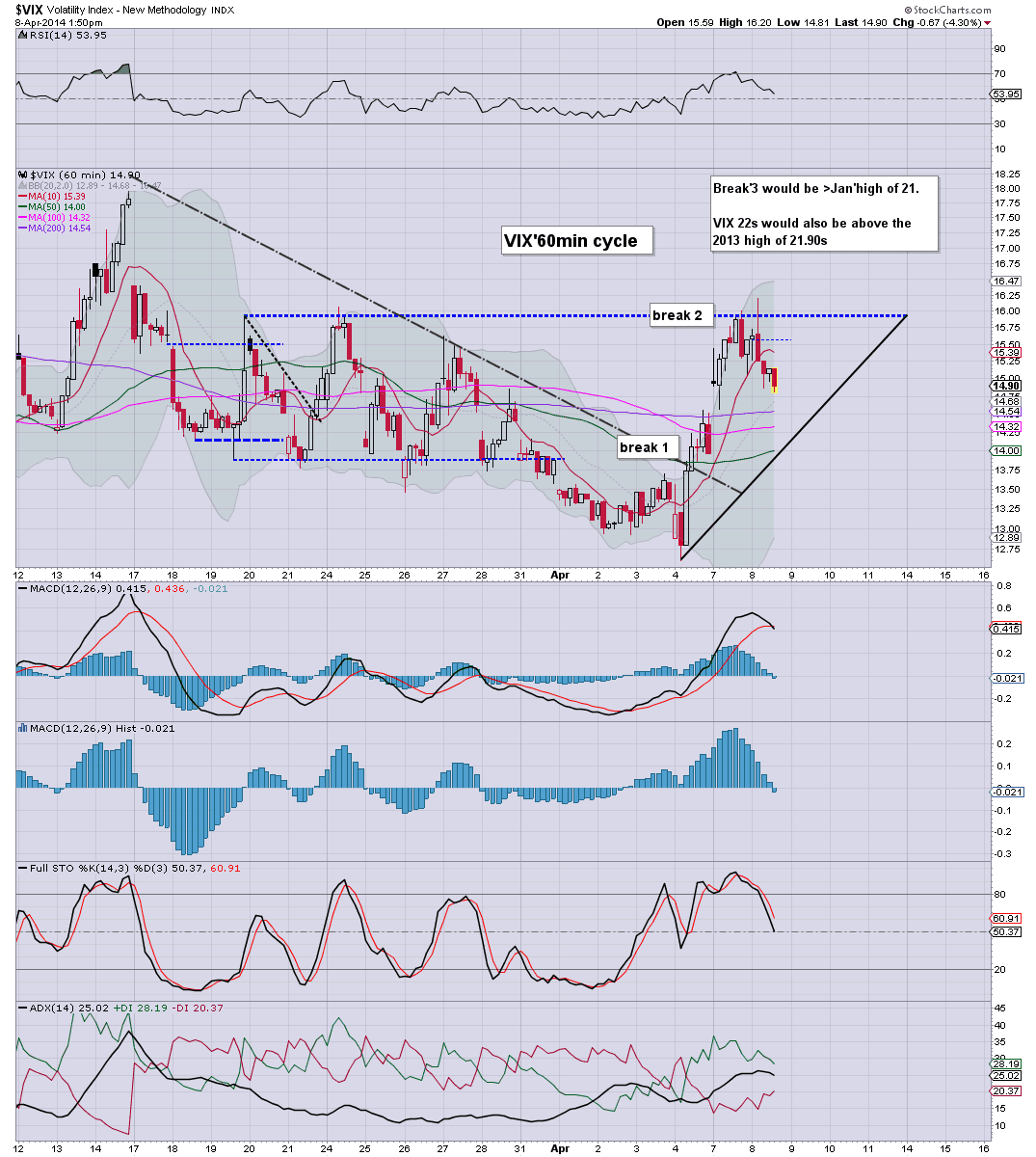 I'm going to hold to the original outlook, and will call this a bounce.

Bears have achieved the two key signs I wanted to see...

-
We have the FOMC minutes due tomorrow at 2pm. Its the only notable planned news of the week. A bounce into that..seems..viable.

My only concern remains the next sig' QEs of Thurs/Friday.

As things are...I will still consider an index short tomorrow...somewhere in the sp'1865/75 zone.

--
*as I type, a reasonably 'semi-normal guest' on clown finance TV, is talking about market 'headed for the 200 day MA at sp'1769'....which is pretty interesting to hear.


2.14pm.. for those watching the hourly charts... upper bollinger is starting to collapse... will be around 1875 tomorrow morning...that IS the wall.

Call it a sub'B. . 2... or whatever... we ain't likely closing red.
Posted by Trading Sunset at 18:52:00
Email ThisBlogThis!Share to TwitterShare to FacebookShare to Pinterest

US markets continue to battle higher, with the sp' +10pts @ 1854. VIX reflects a market that has little concern, even this morning as the sp' briefly lost the 50 day. Metals are holding gains, Gold +$12, whilst Silver +0.8% 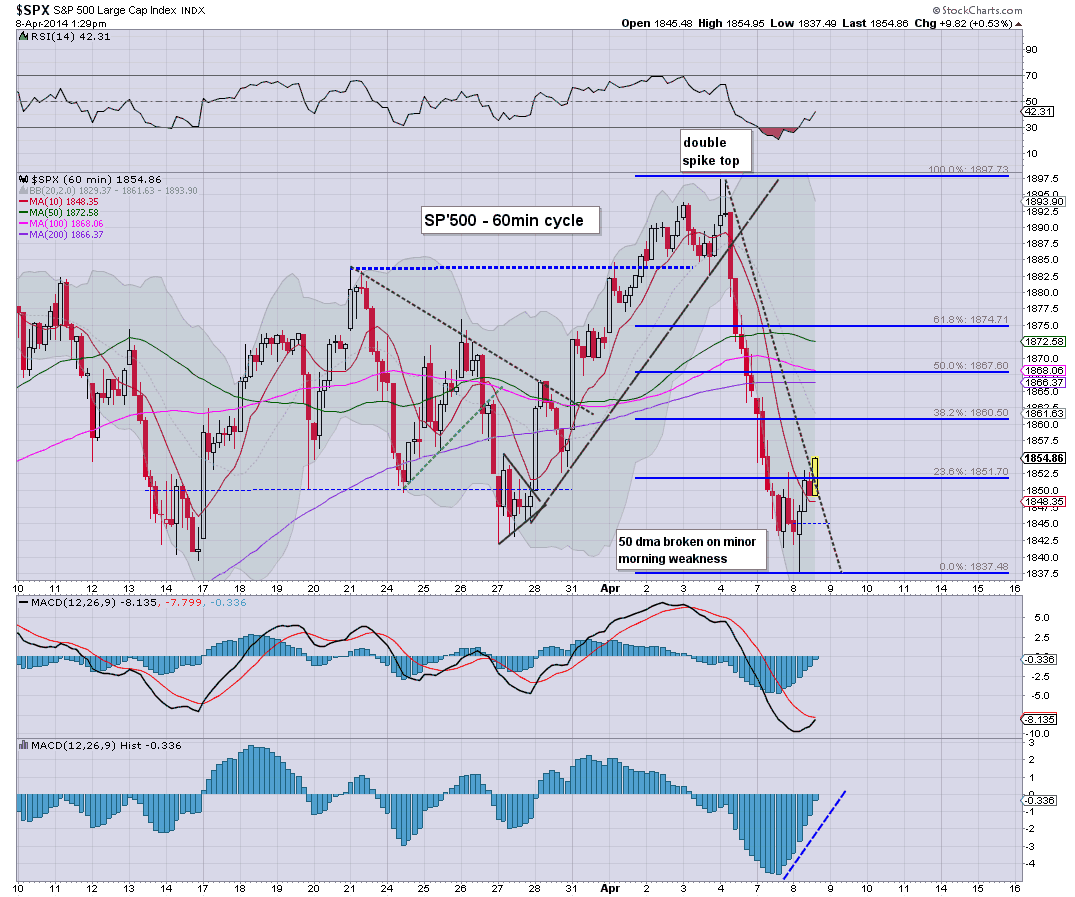 That will make the 1870s viable tomorrow morning, and no doubt, many bears will be disgusted at that.
Posted by Trading Sunset at 18:31:00
Email ThisBlogThis!Share to TwitterShare to FacebookShare to Pinterest

Mr Market has probably managed to annoy the max amount of traders this morning. Opening weak chop, early sign of a bounce..utter failure...break of 50 dma..to sp'1837...only to whipsaw into the low 1850s. VIX remains a key sign, and is in melt mode...set for a daily close in the 14s. 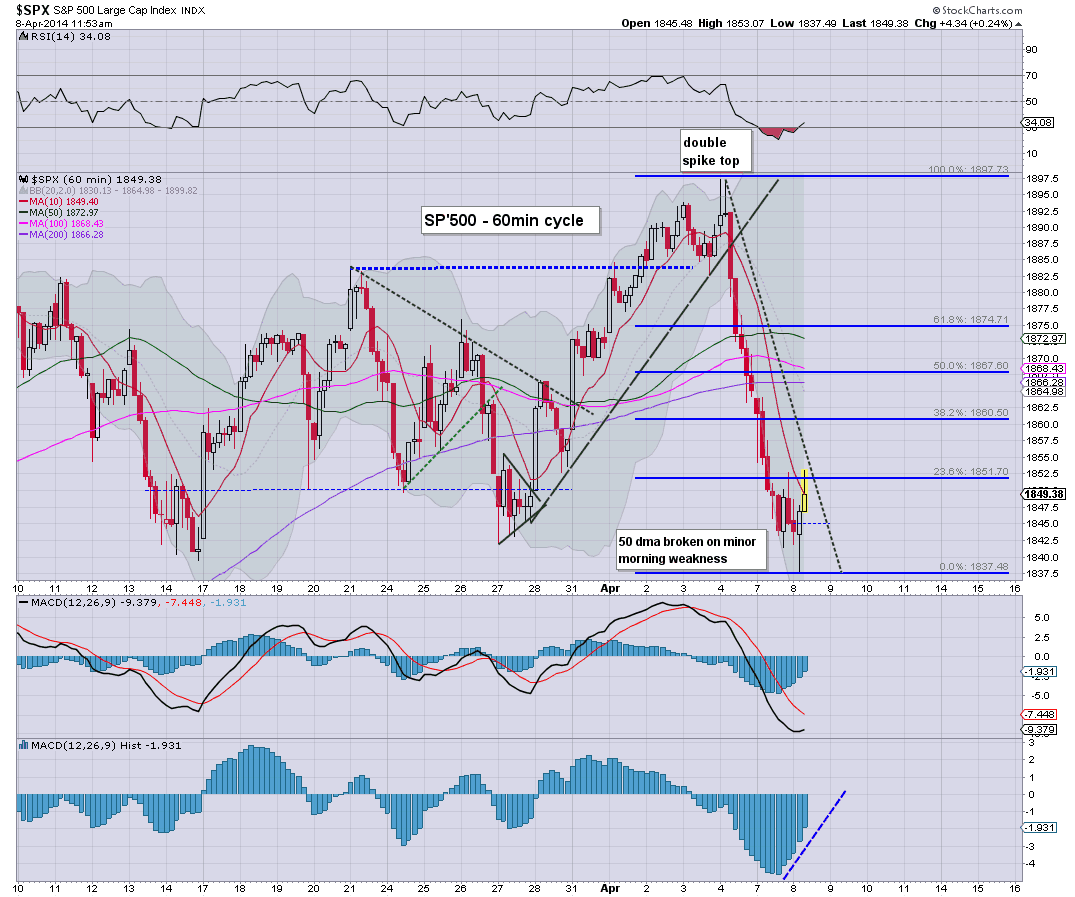 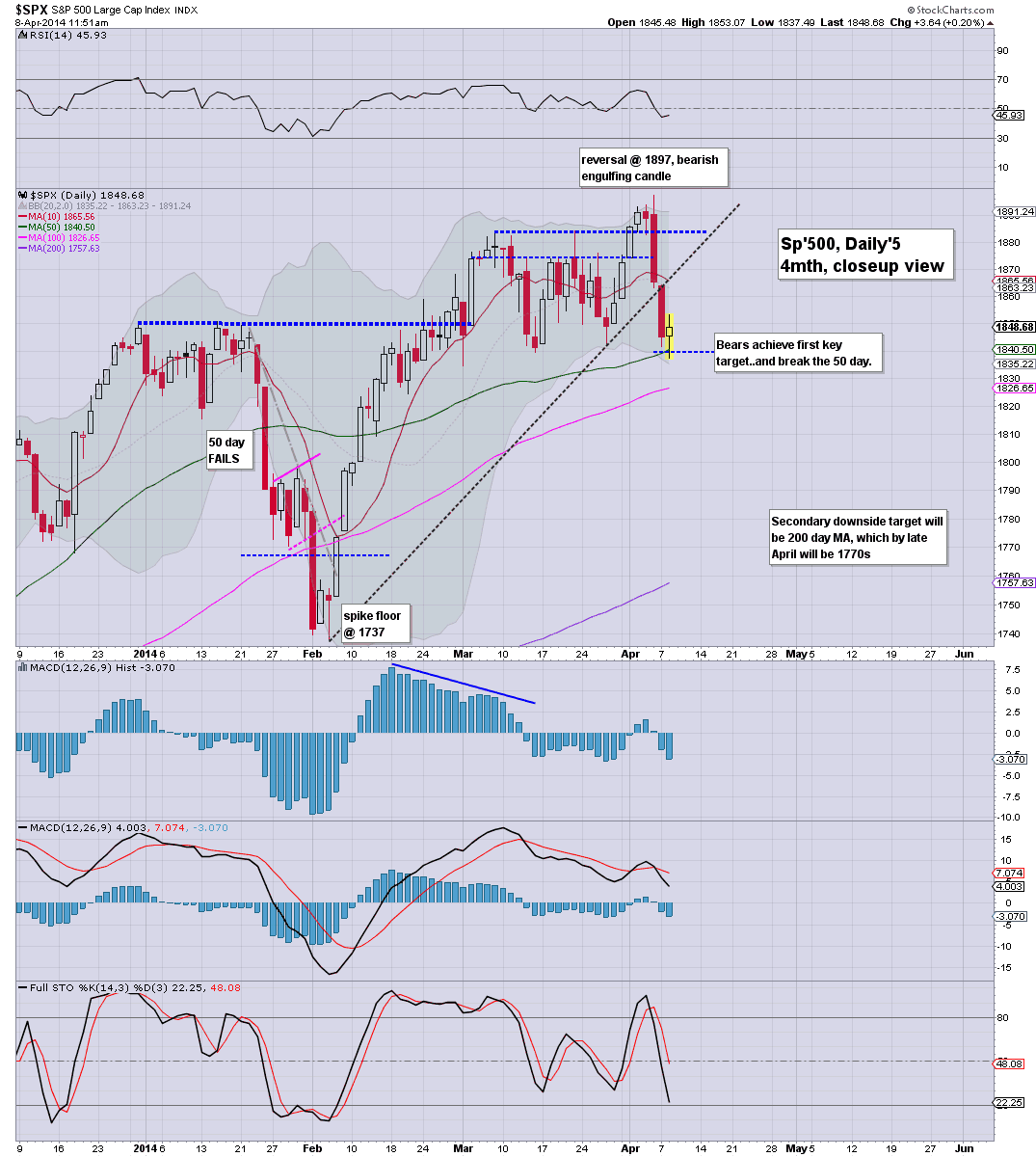 *as suggested by 'deflationland', a back test of the old broken support...to the 1870s?

--
time for tea.
Posted by Trading Sunset at 16:53:00
Email ThisBlogThis!Share to TwitterShare to FacebookShare to Pinterest

US equities failed the first bounce attempt, with a brief break of the 50 day MA, with sp'1837. With the early drop, the weekly charts turned outright bearish for the first time since late January. VIX is showing little concern though, and seems unable to hold the 16s. 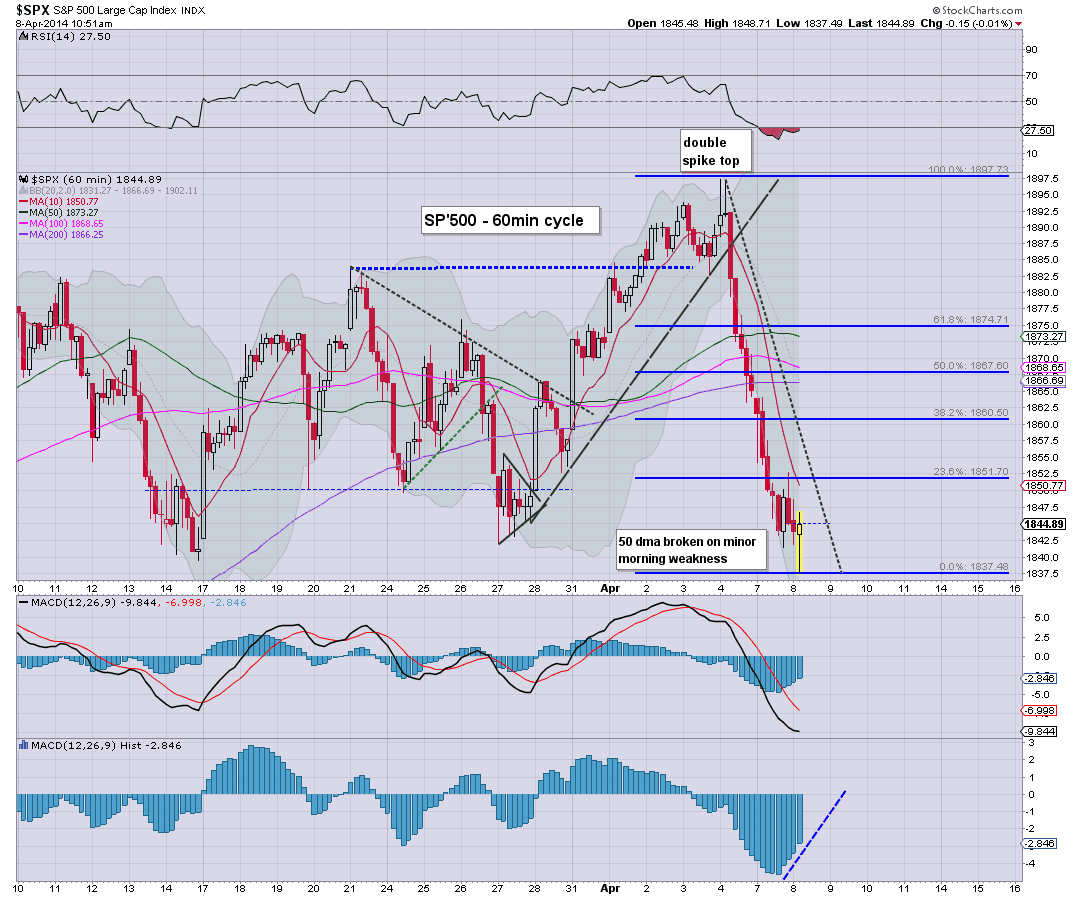 So..the 50 day MA has been decisively taken out, and we've even seen the weekly charts for the headline sp'500 index turn outright bearish.

For the bears with eyes on much lower levels, regardless of any bounce in the next trading day or two, the bigger picture looks increasingly weak.

My only concern remains a VIX which is still not showing quite enough upside power.


Notable strength in the coal miners... 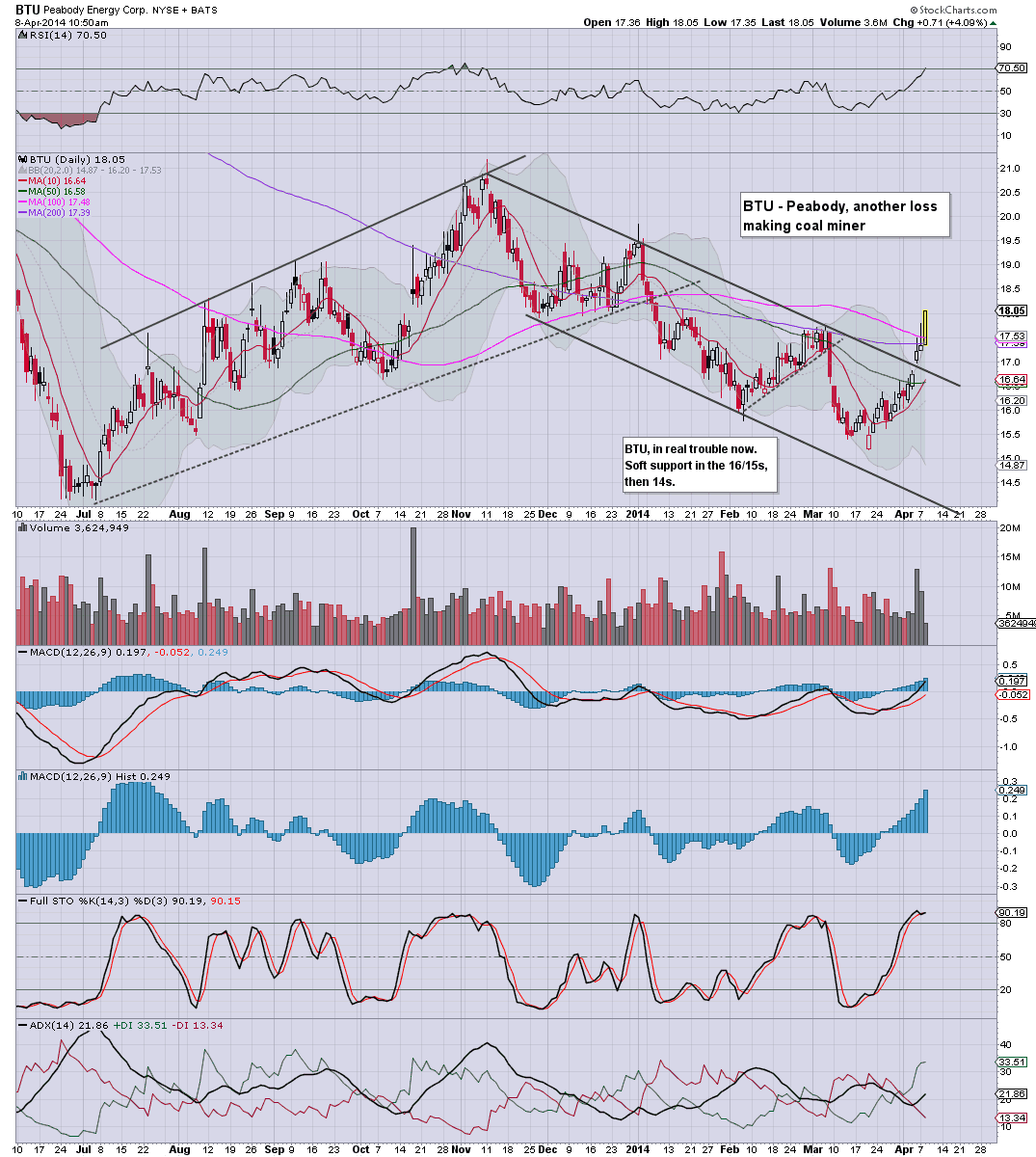 Kinda ironic, after JRCC imploded yesterday. Less competition, good for the other miners?
-

This remains a tricky market...kicked out the bulls...only to whipsaw higher.

Notable strength; GOOG + 2.5%
Posted by Trading Sunset at 15:52:00
Email ThisBlogThis!Share to TwitterShare to FacebookShare to Pinterest

US equities saw very minor weak chop in pre-market, and with an opening spike-floor candle, the market looks set to bounce all the way into tomorrow. Metals are higher, Gold +$13, the weaker USD -0.5%, is no doubt really helping. 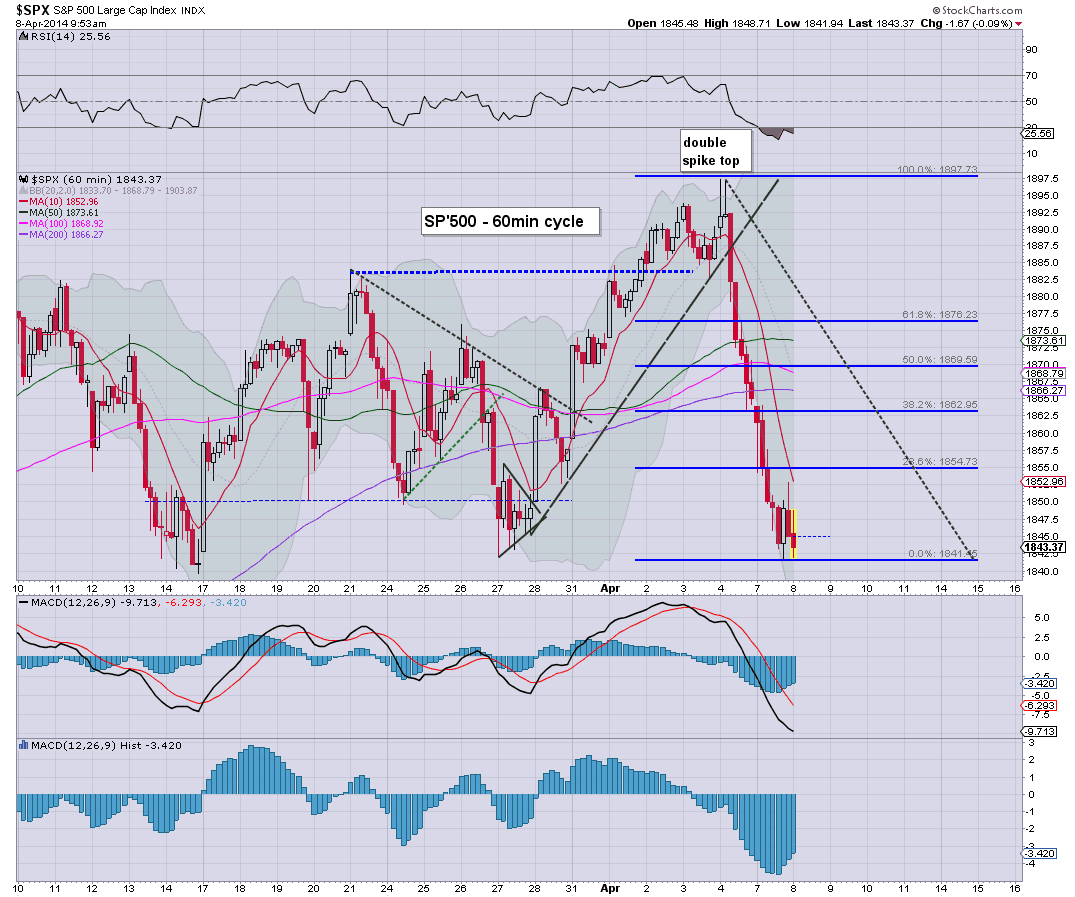 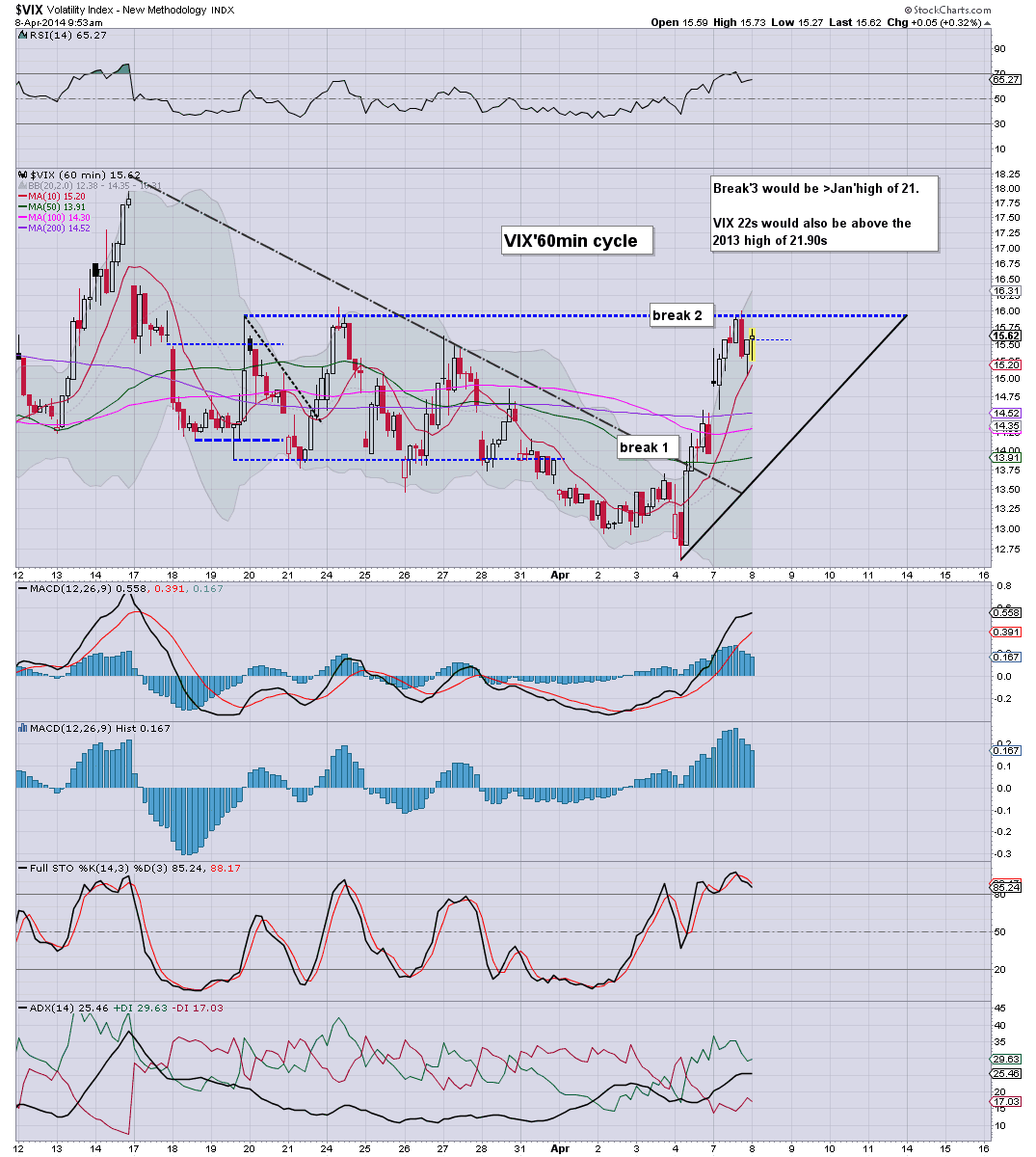 Despite some continued minor chop, a bounce is likely underway.

Hourly MACD (blue bar histogram) cycle is offering at least 6-10 trading hours of upside, which will likely take us into early tomorrow.

--
*I remain on the sidelines, will consider a re-short...tomorrow, when the MACD cycle will likely max out..somewhere in the sp'1865/75 zone.
-

10.04am... bears can't break lower.....bulls are going to push considerably higher, but with the recent weakness..the path upward will likely be real shaky. 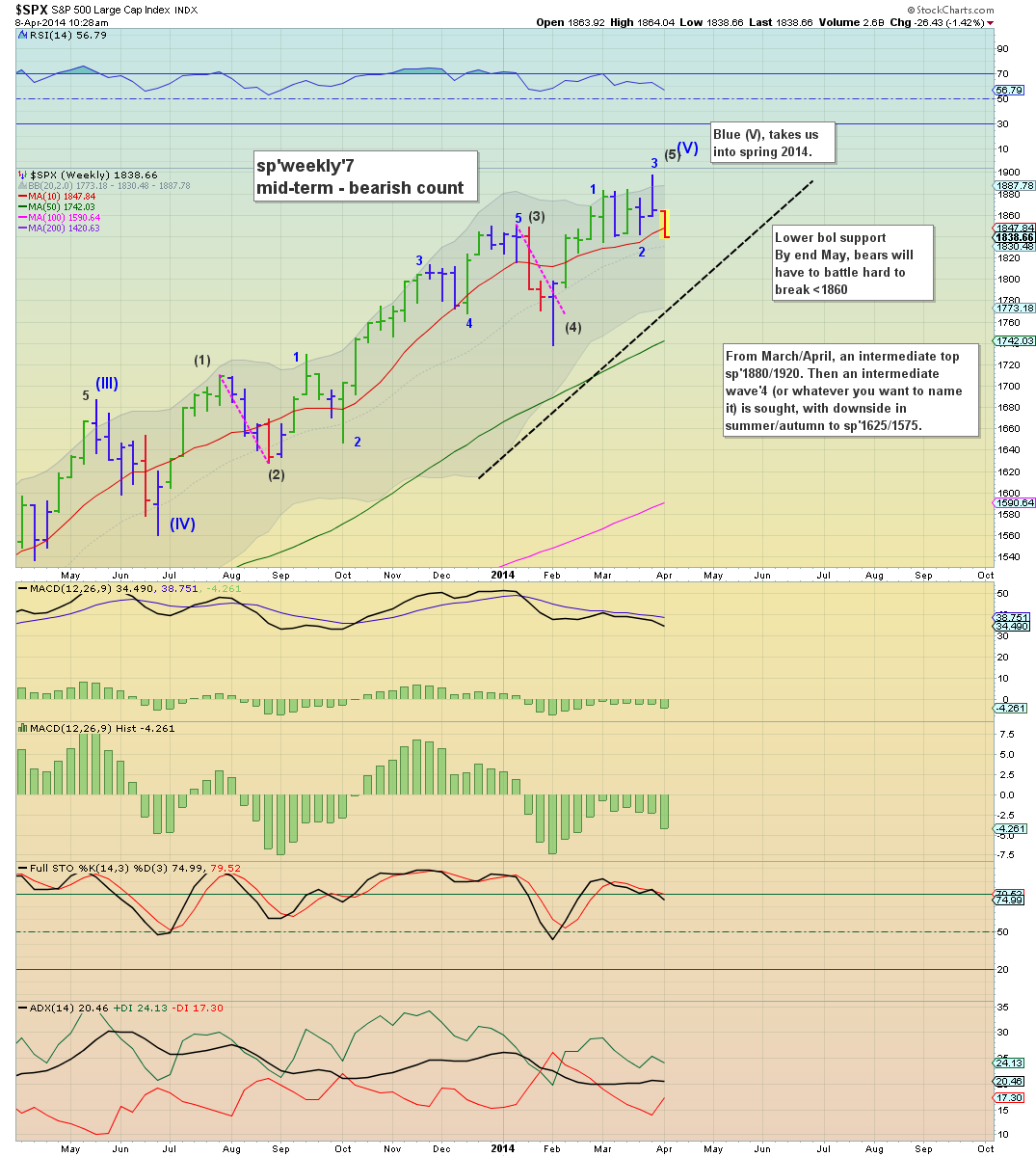 So much for the bounce.
-

10.37am.. well, the 50 day was pretty much decisively broken, and regardless of any bounce now...a LOT of technical damage has been done.

VIX remains relatively weak, and is only +1%..... which to me, still threatening an equity rally.

VIX certainly reflects a market with little concern.
Posted by Trading Sunset at 14:53:00
Email ThisBlogThis!Share to TwitterShare to FacebookShare to Pinterest 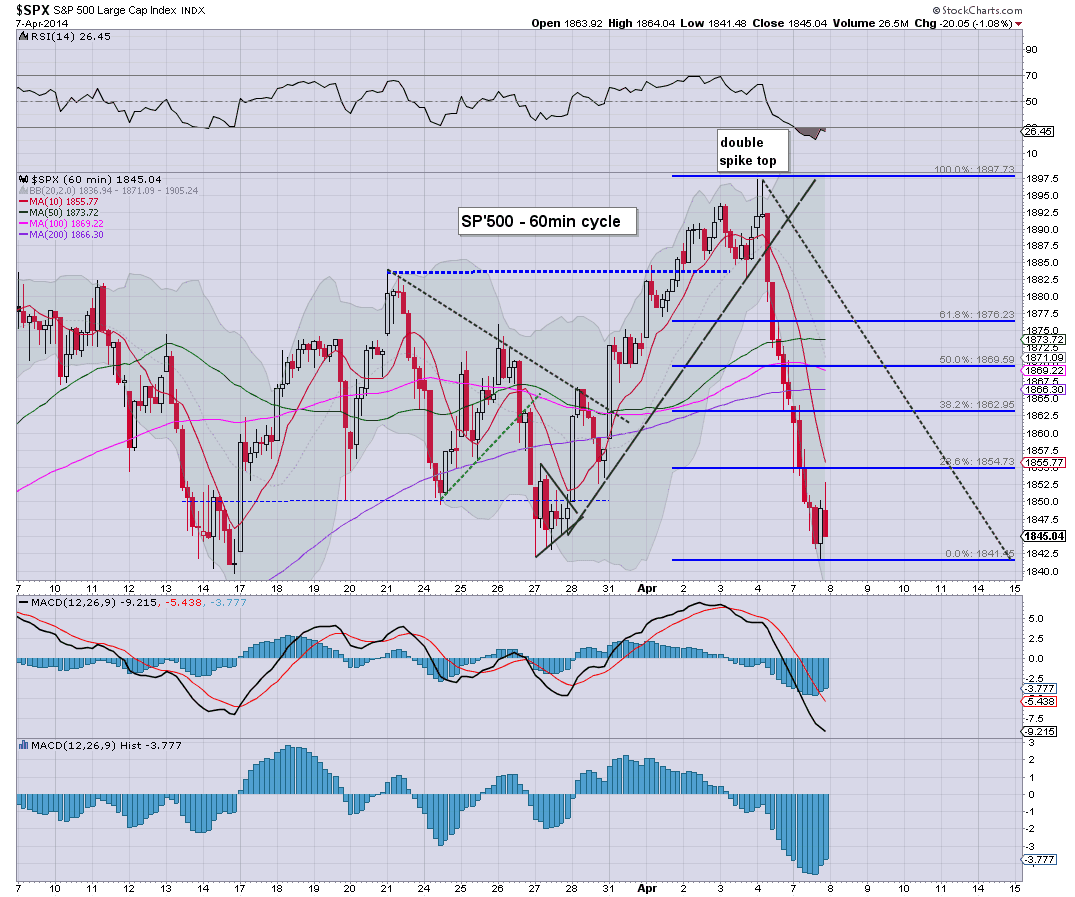 With no sig' QE until Thursday, the bears have a window of opportunity. They had better make good use of it! However, hourly MACD (blue bar histogram) cycle offers upside across much of today, if not also the first half of tomorrow. So, there is most certainly a high chance of the 1860s.
--

My best guess is that we do hold sp'1839/40, bounce today/tomorrow, with renewed downside later in the week.

With the 60/15min cycles as they are, I simply can't chase this market lower..way risky in my view. Neither will I go long, with the break of the weekly 10MA. So for me, I'm trapped by two personal trading rules, at least for the moment.
-

USD is having real issues this morning.. -0.53% @ 79.81, and this will certainly help the bulls bounce this nonsense


9.35am.. here cometh...the bounce!
Posted by Trading Sunset at 13:30:00
Email ThisBlogThis!Share to TwitterShare to FacebookShare to Pinterest

An important break for the bears

Perhaps most notable today was the decisive break below the weekly 10MA of sp'1848, which the market has not traded below since early February. Equity bears just need to break <1840, and then primary downside target is the lower weekly bollinger...in the low sp'1770s. 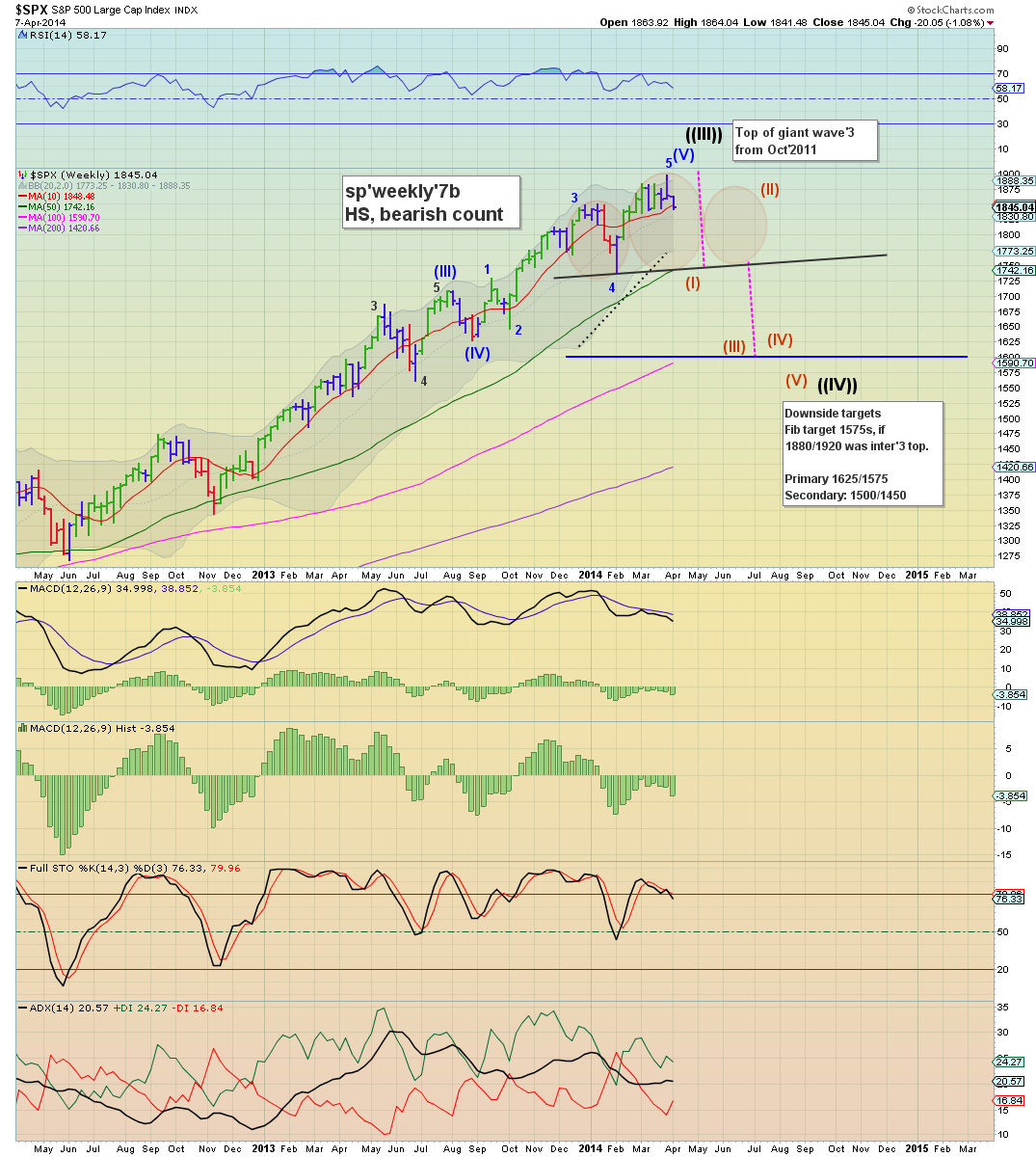 *a late day bounce from sp'1841 to 1852, but that is likely just part of a natural 'stupid bounce'. Overall, the equity bears should be very pleased with the price action since Friday morning.
-

The above weekly7'b scenario remains the most bearish outlook, and despite the recent two days of downside, bears still need two key things...

Once the latter is achieved, then the subsequent bounce might form a RS in May...with the more dynamic downside in June/July. That is a long way off though..so lets first see if market will break <1840 this week.


Farewell to an old miner

James River Coal Company (JRCC) filed for bankruptcy today. JRCC used to get an awful lot of attention across many of the popular message boards. 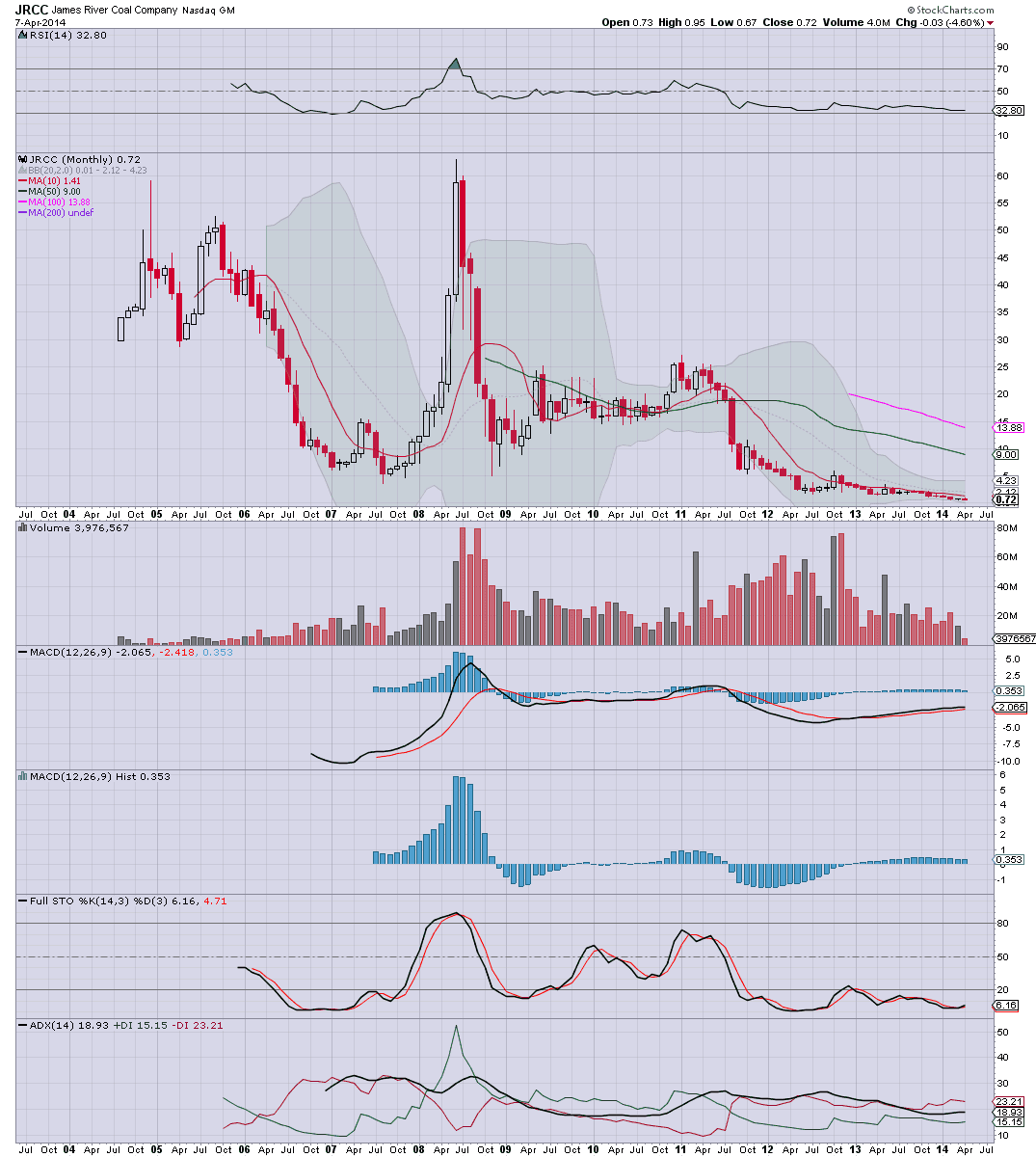 With the announcement, JRCC collapsed a further 40% in after hours trading - see Yahoo finance,  to around 40 cents. JRCC sure wasn't the first miner to implode in the last few years, anyone out there remember Patriot Coal (PCX) ? With the demise of JRCC, I have to wonder about the remaining coal miners, namely ACI, ANR, BTU, CNX, and WLT.
-

There is nothing of significance due tomorrow.


Ready to short a Tuesday bounce

With the break of the weekly 10MA, I'm now reasonably comfortable to short the next micro-cycle bounce. With both daily and weekly MACD cycles negative, the price momentum is most certainly with the bears.

A daily close <1840..and the door will be wide open to a swift decline to the sp'1770s, and I'd most certainly like to ride that wave. 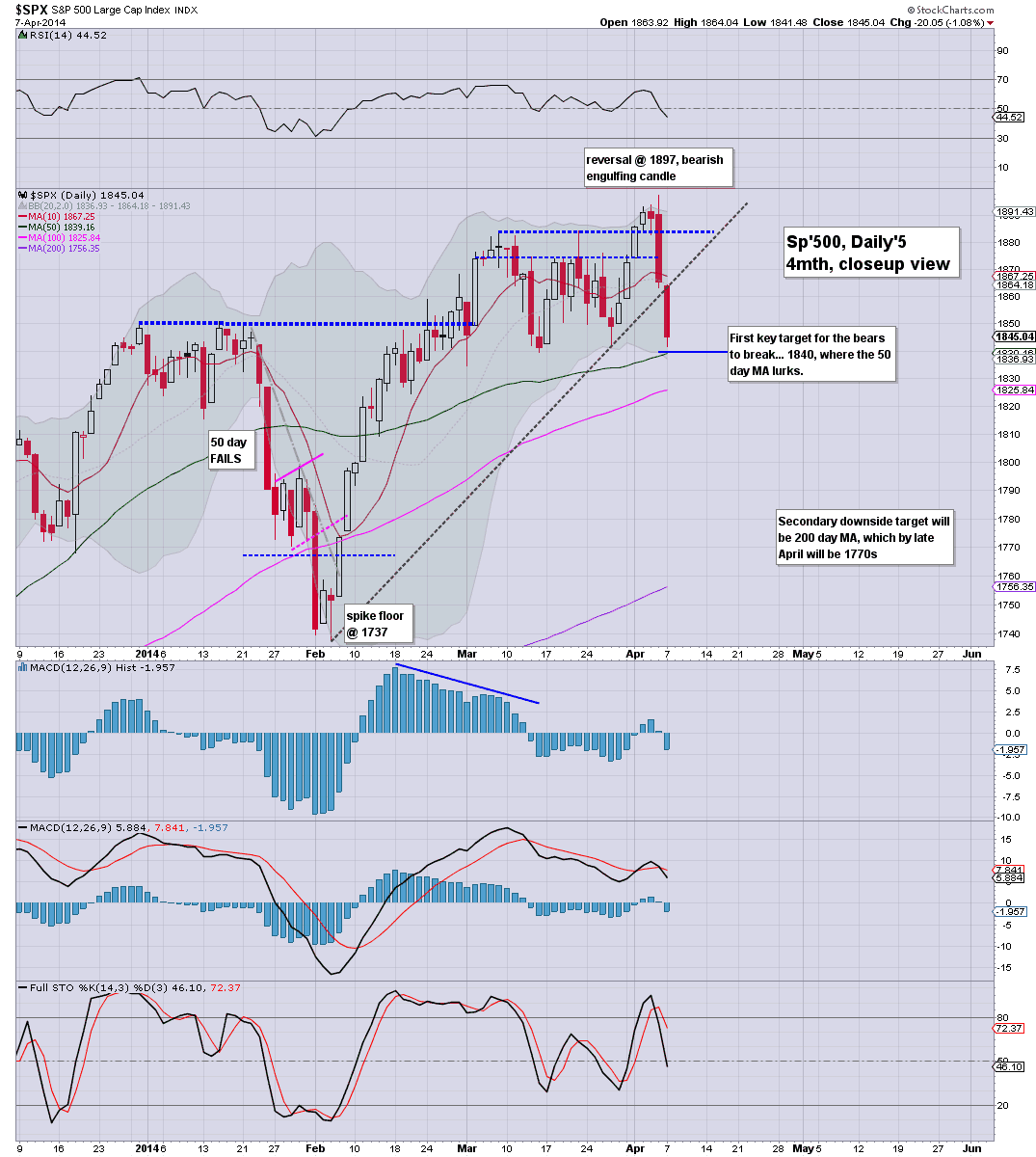 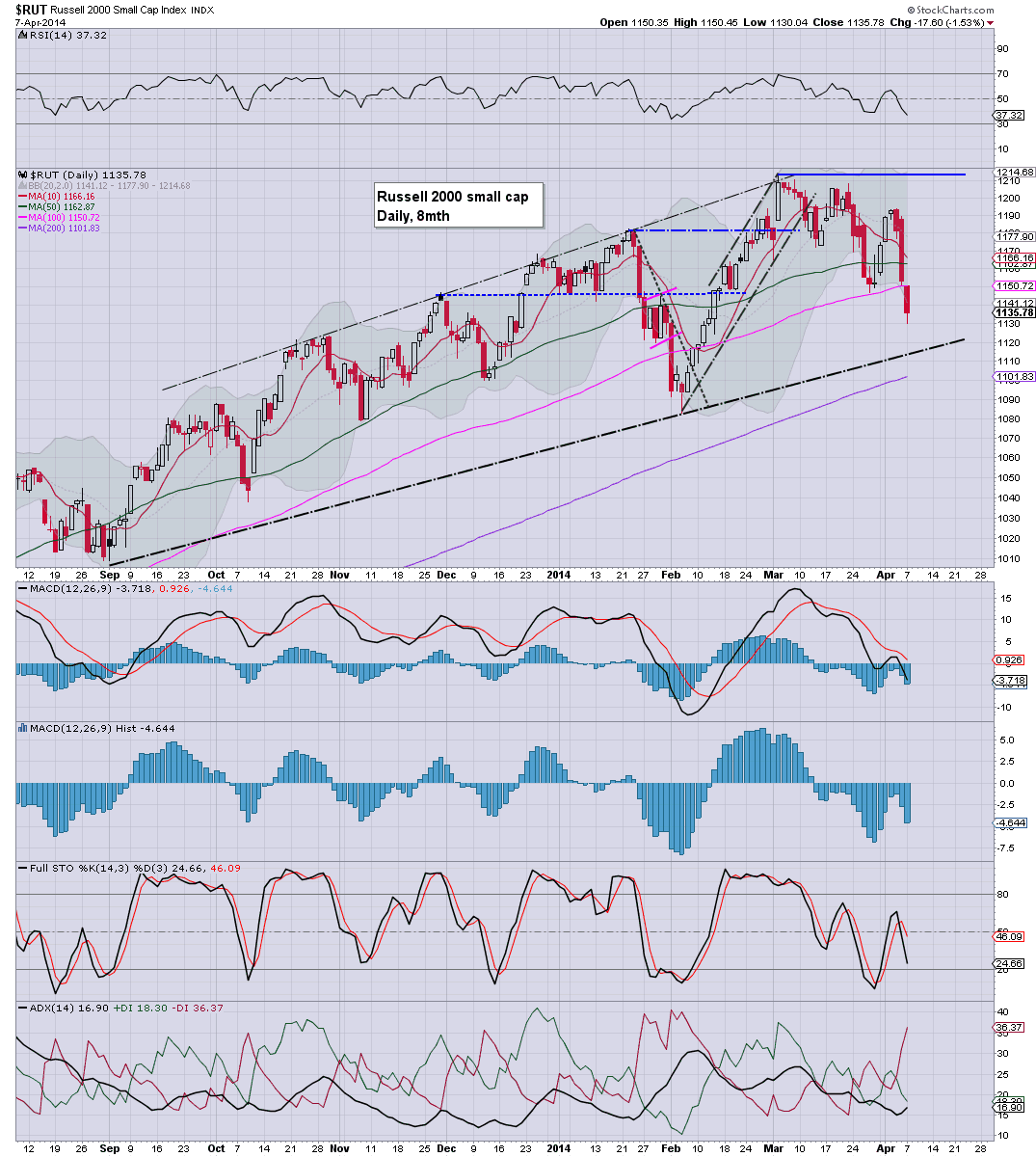 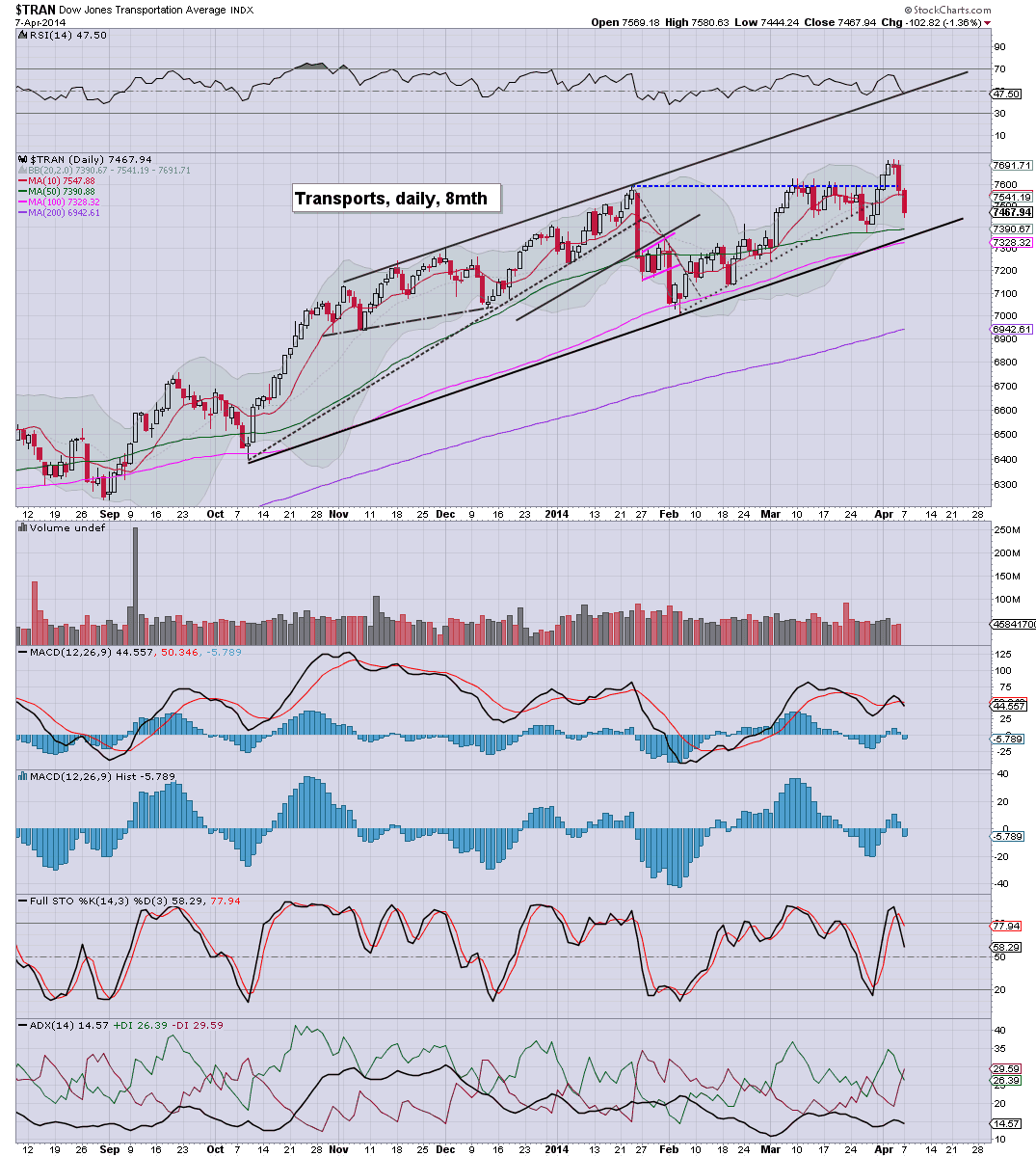 The Friday morning peak of sp'1897 now looks a considerable way up, and many out there no longer seem to expect that to be hit again in the near term.

So, a day for the bears, and daily MACD (blue bar histogram) cycle remains outright bearish for all indexes - especially the R2K and Nasdaq, and there is a very viable 3-5 days of downside to come.
-