World equity markets continue to broadly climb. However, there is some noticeable continued weakness in Brazil, Japan, and China. As the northern hemisphere moves into spring 2014, equities look very vulnerable to a multi-month decline of as much as 15/20%. 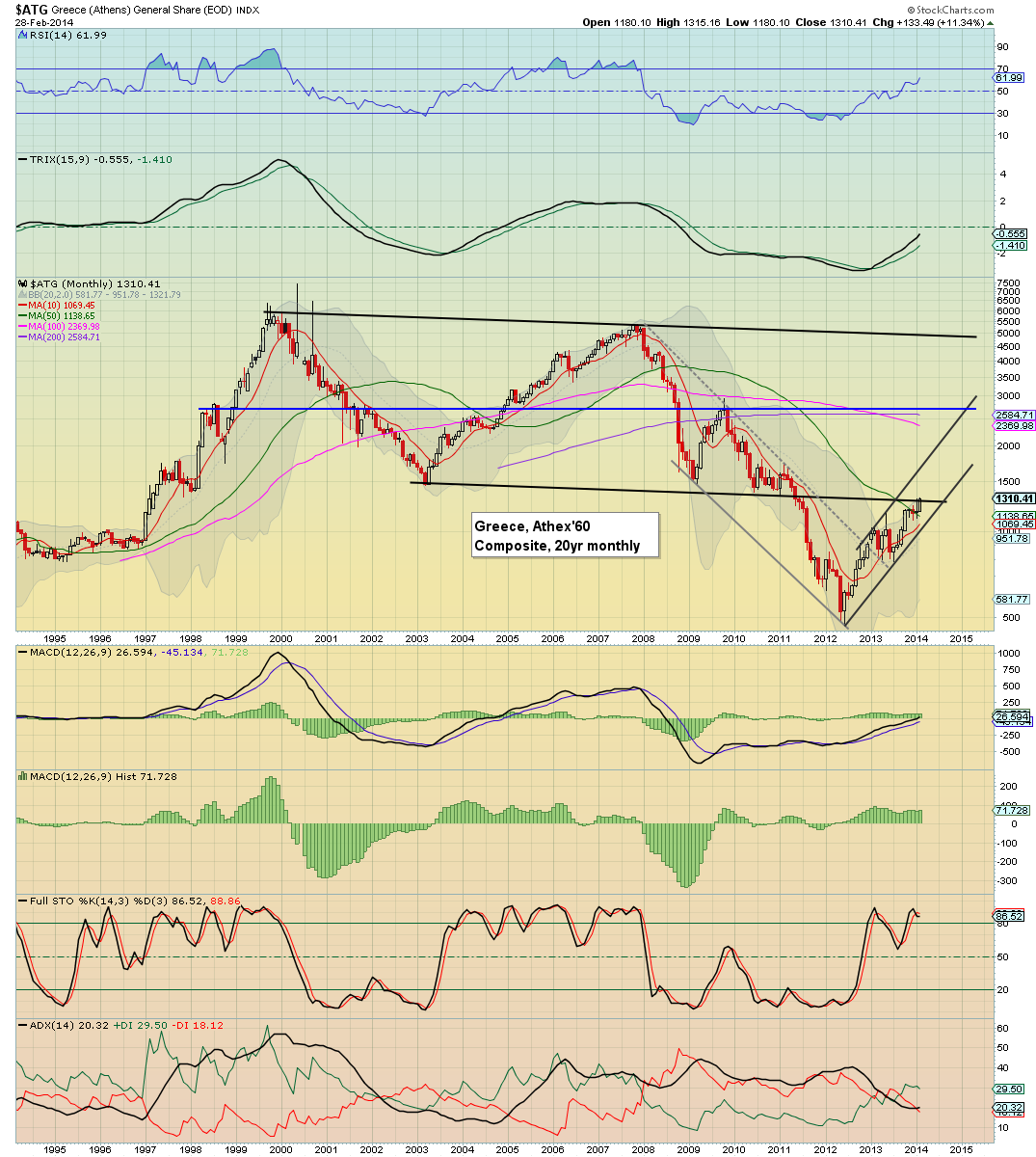 The Greek market soared 11% in February, with an important monthly close just above what is a key support/resistance line. There is upside in March/April to the 1500s, that is another 15% higher. If the world markets get upset this summer, then obvious downside remains the giant psy' level of 1000. 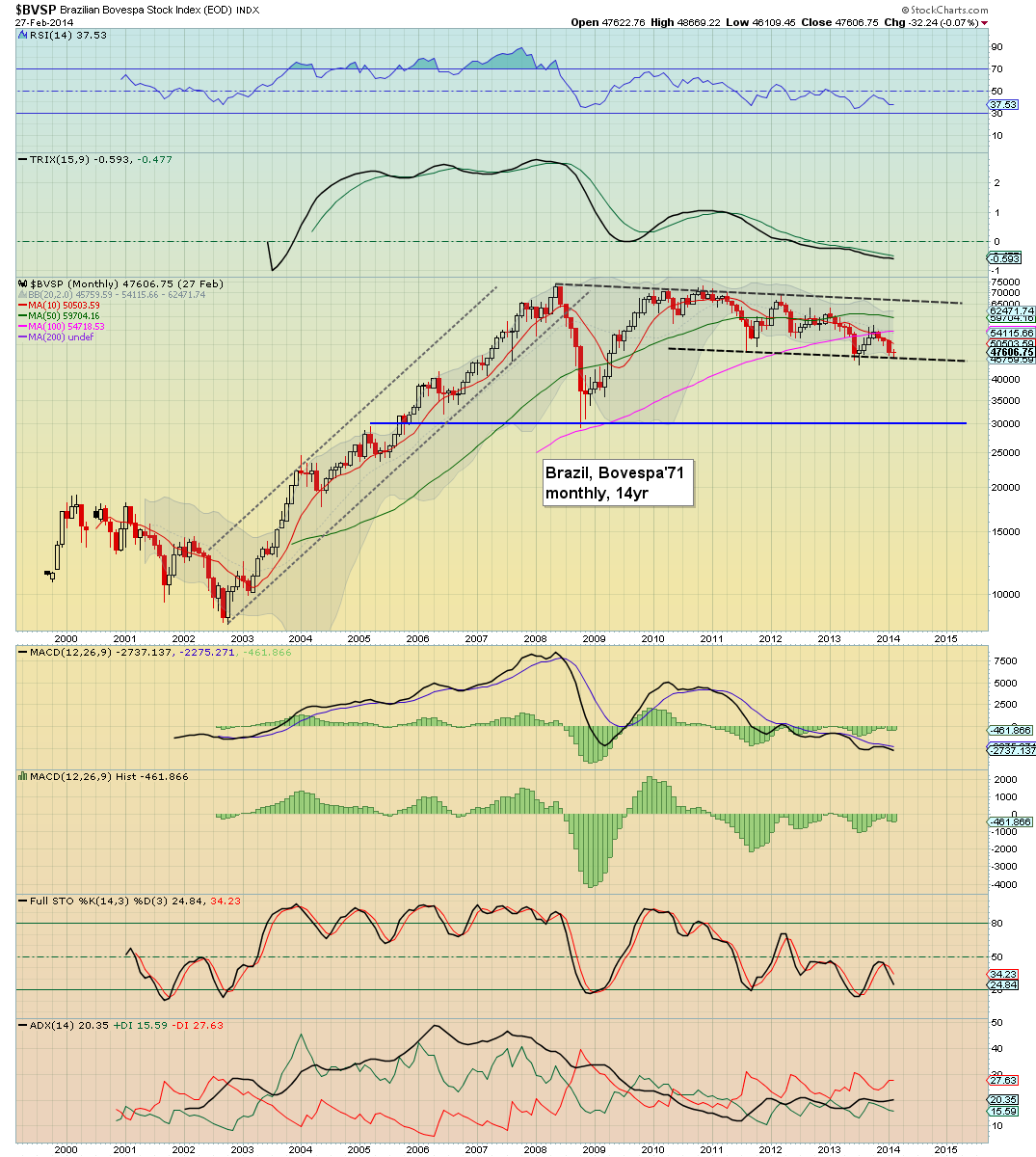 The Bovespa closed fractionally lower, the fourth consecutive monthly decline. This index is particularly weak, and remains in danger of unravelling all the way down to 35/30k - back to the 2009 collapse wave low. 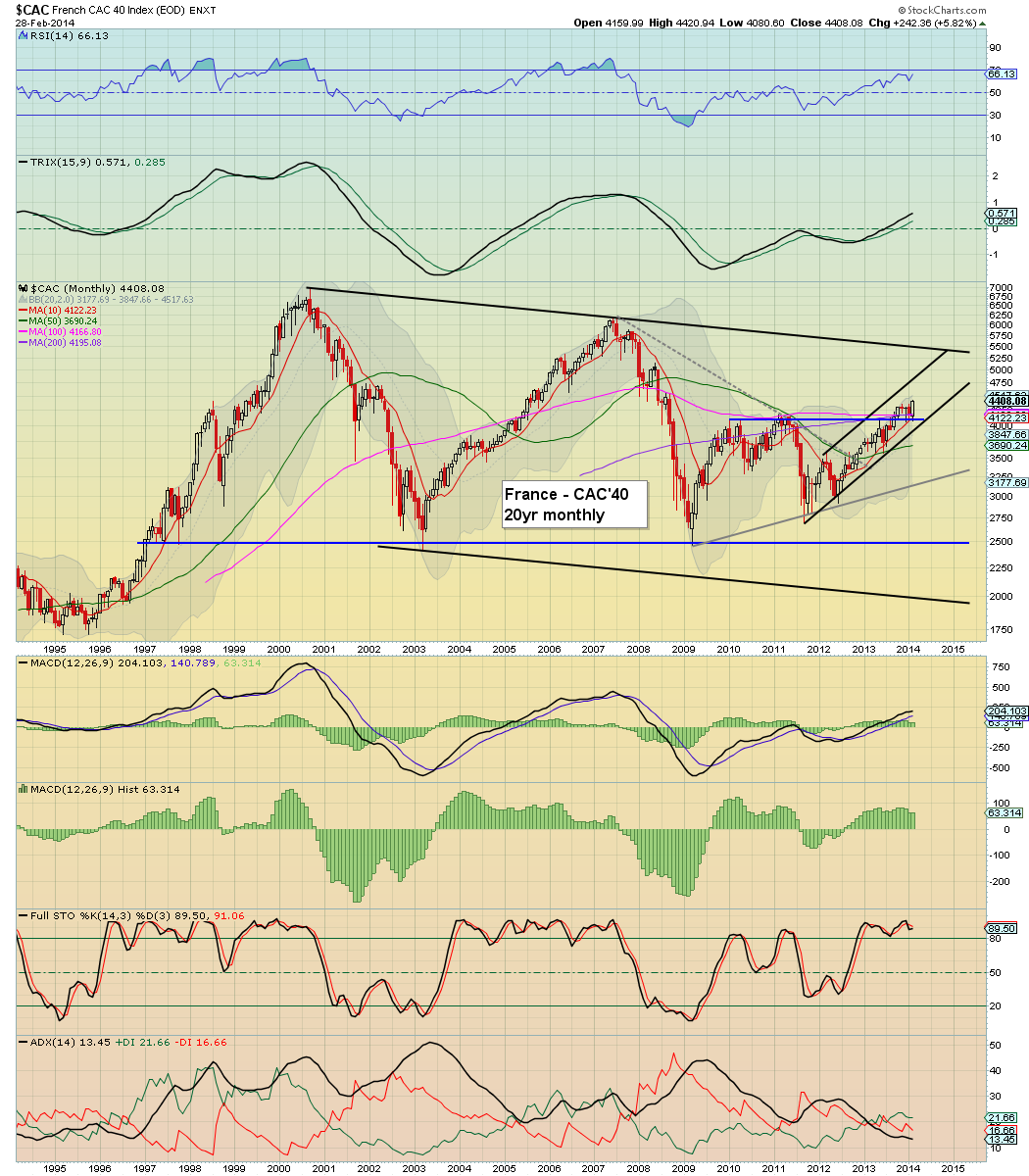 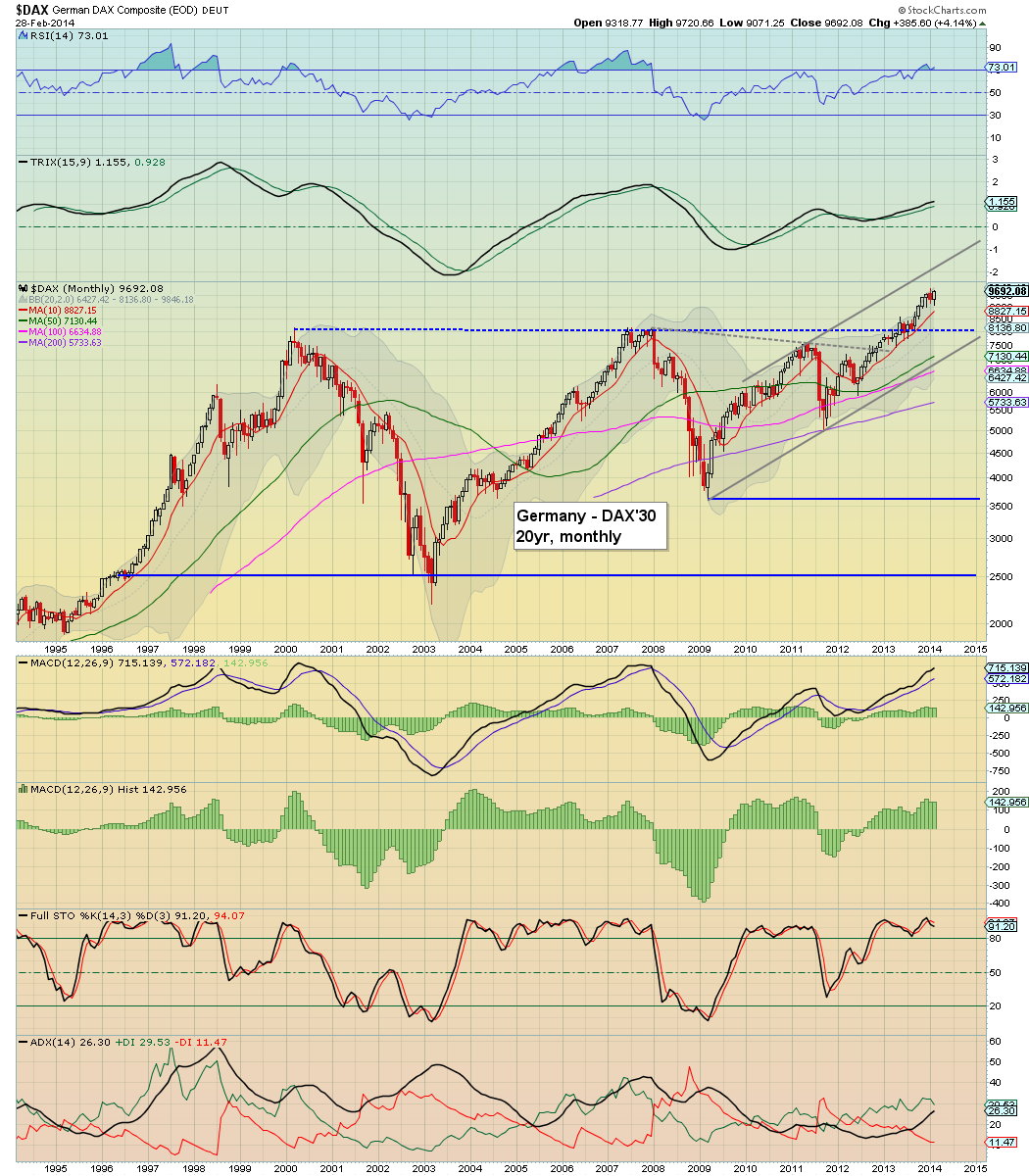 The economic powerhouse of the EU - Germany,  saw its market climb a very significant 4.1%, and is now just over 3% away from hitting the giant psy' level of 10k. Clearly, there will be a lot of media attention on the 10k level, and it'd make for a very natural multi-month top this spring. 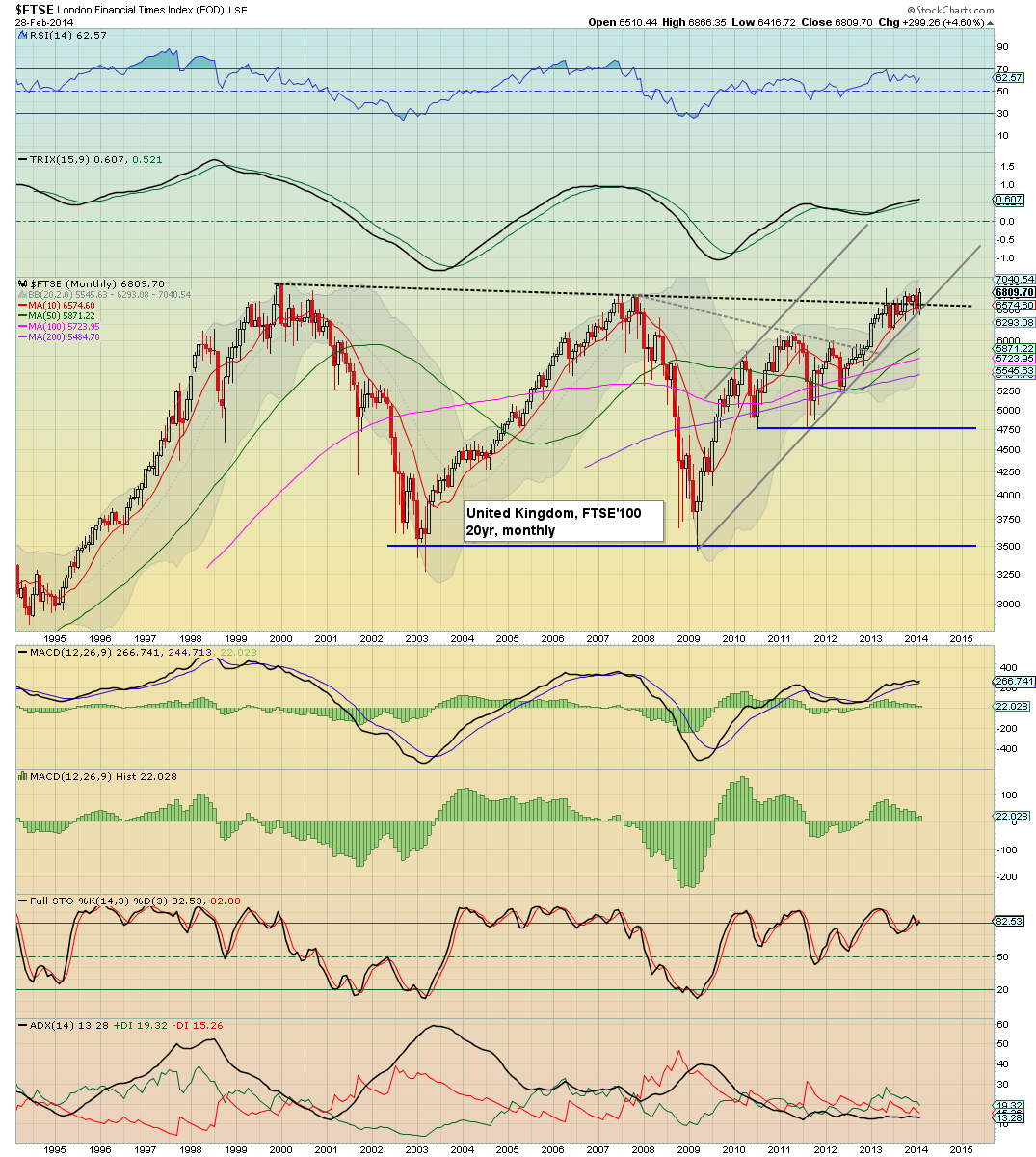 The UK market is still fighting to break the historic high of 6950 - from Dec'1999. The big 7k level looks viable this spring. Natural downside this summer would be 6000/5750 zone. 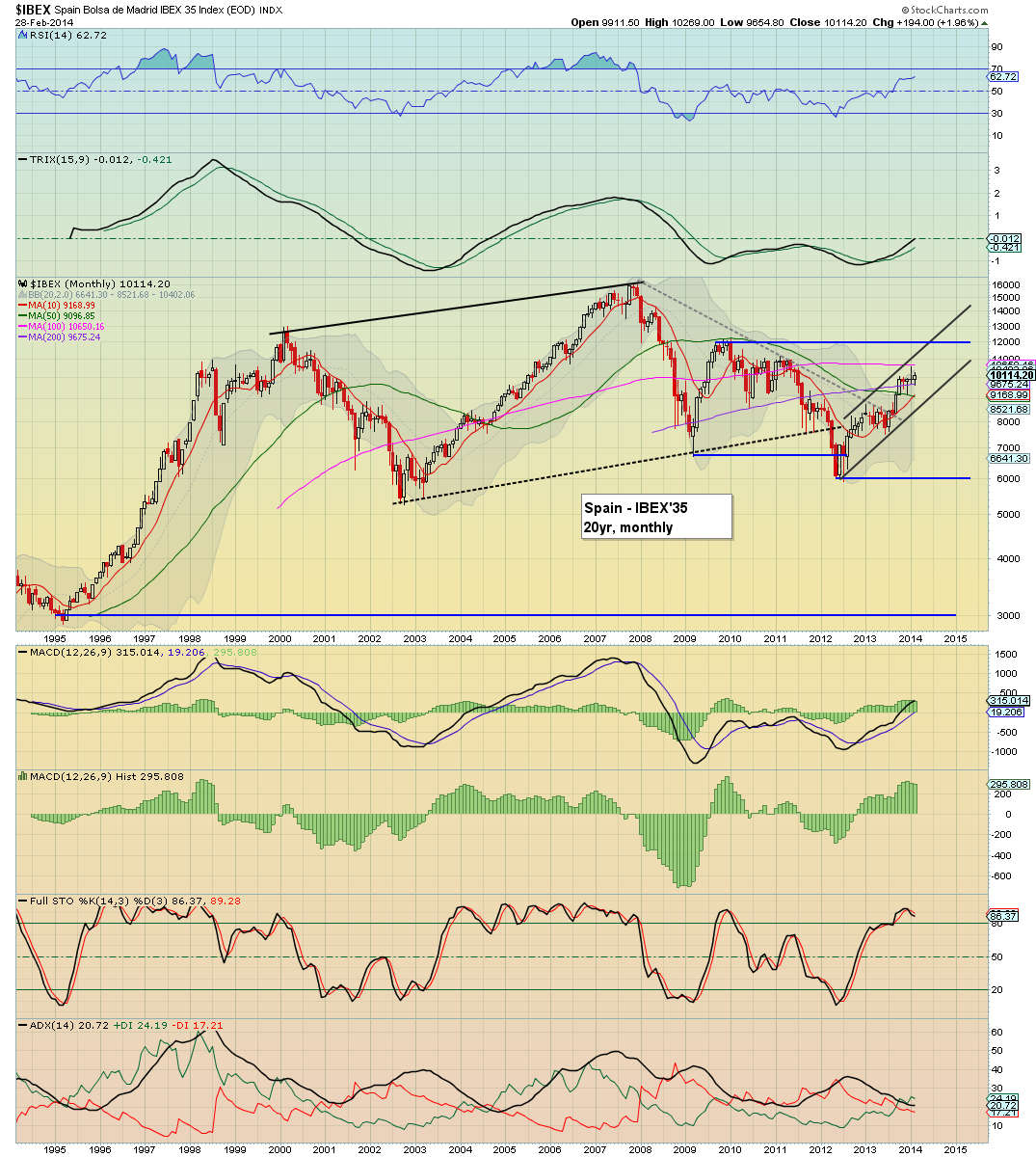 The IBEX struggled in February, but still managed gains of almost 2%. The next key resistance of 12000 looks out of range in the current multi-month up wave. If the market gets upset this summer, natural downside would be to around 8k. 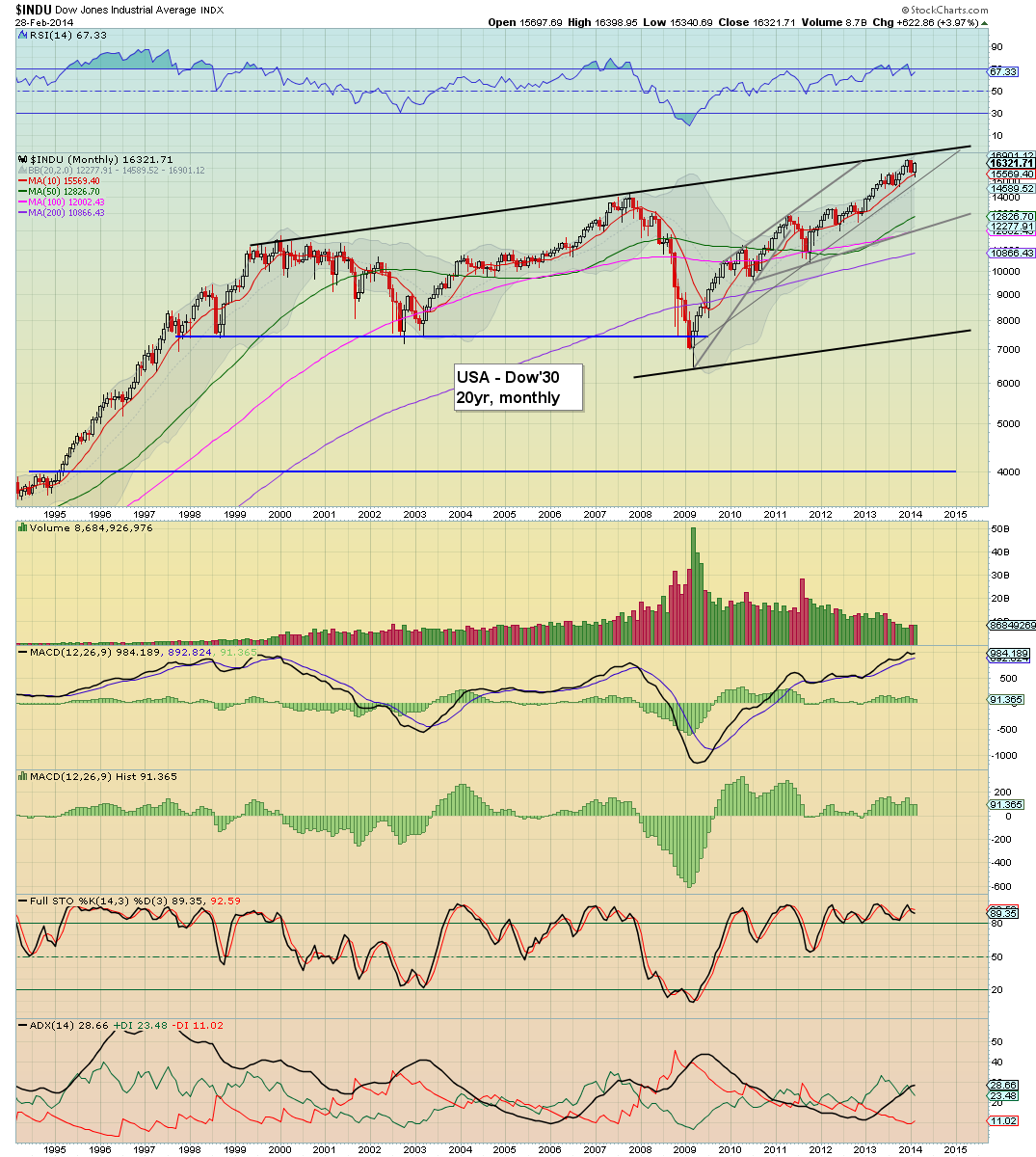 The mighty Dow climbed 622pts (4%) in February, and looks set to break a new historic high in March. However, 17k looks just out of range in the current multi-week up wave, which might max out around the time of the next FOMC (March'19).

Best case downside this summer, is the 14/13k zone. Certainly, 12k does not look viable on the next multi-month decline (assuming we even get a major decine). 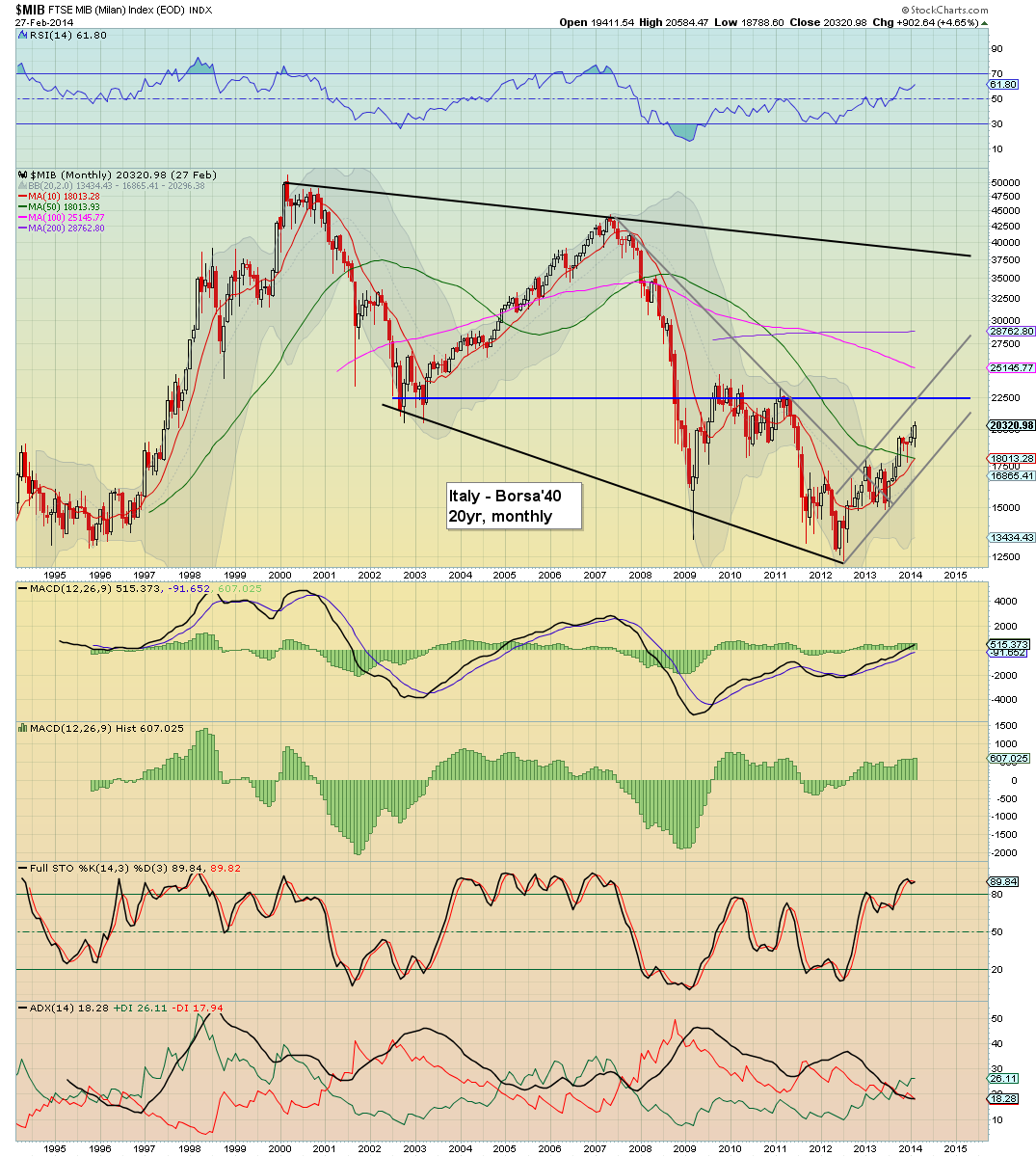 The Italian Borsa climbed 4.6%, and looks set to test key resistance in the 21/22k zone this March. A monthly close >22k looks unlikely in the current multi-month cycle. Natural downside - most bearish case, would be 17500/16500. 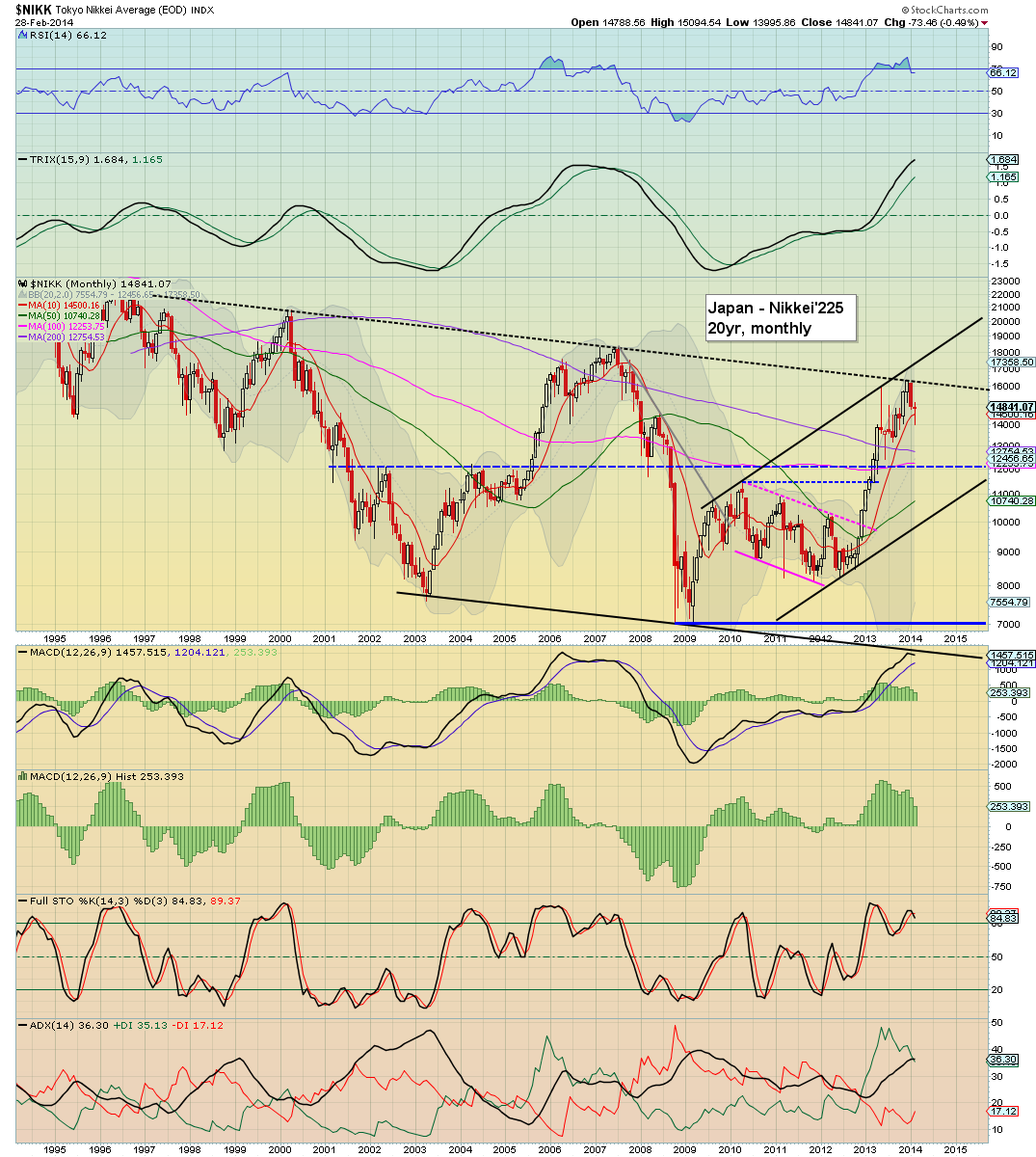 Despite the continued money printing from the JCB, the Nikkei is really struggling, and saw a net monthly decline of -0.5%. If the world financial markets get rattled this summer, there is natural downside in the Nikkei to the 12/11k zone. 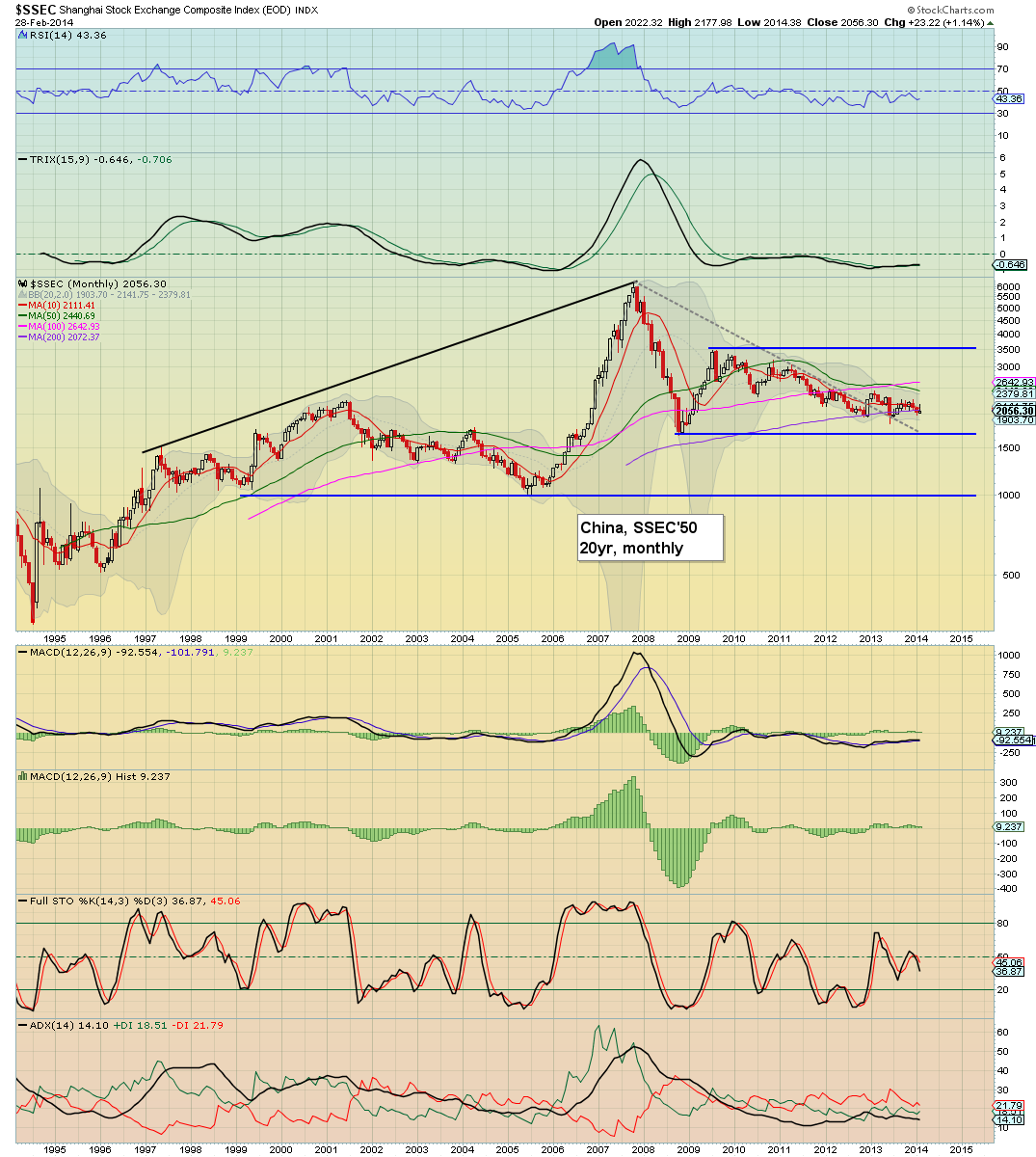 The China market remains very subdued, and managed a gain of just 1%. The Shanghai market continues to trade within a rather narrow range, stuck between 1900/2500. A break <2k, would open up the 1750/1500 zone this summer.

So, there is still broad strength in most of the world markets, and with the two leaders - Germany, and the USA, both significantly higher in February, there looks to be further upside in March, and possibly April.

However, no later than early May, I'd expect a rather severe multi-month down cycle, probably no more than 3-5 months in duration. I am guessing such a decline will be due to geo-political issues, rather than recessionary/economic concerns.

However, the big event will be the monthly jobs data. The last two months have seen major misses. If we see a third weak month (net gains <125k), the market might go with the 'bad news is good news', in that taper'3 might be postponed until the FOMC of April.

February came to a close with some pretty wild price action in the late afternoon, certainly the strongest closing hour swings we've seen in some months. However, February was definitely a month for the equity bulls. March looks set for higher highs, but by end March, things could look very different indeed. 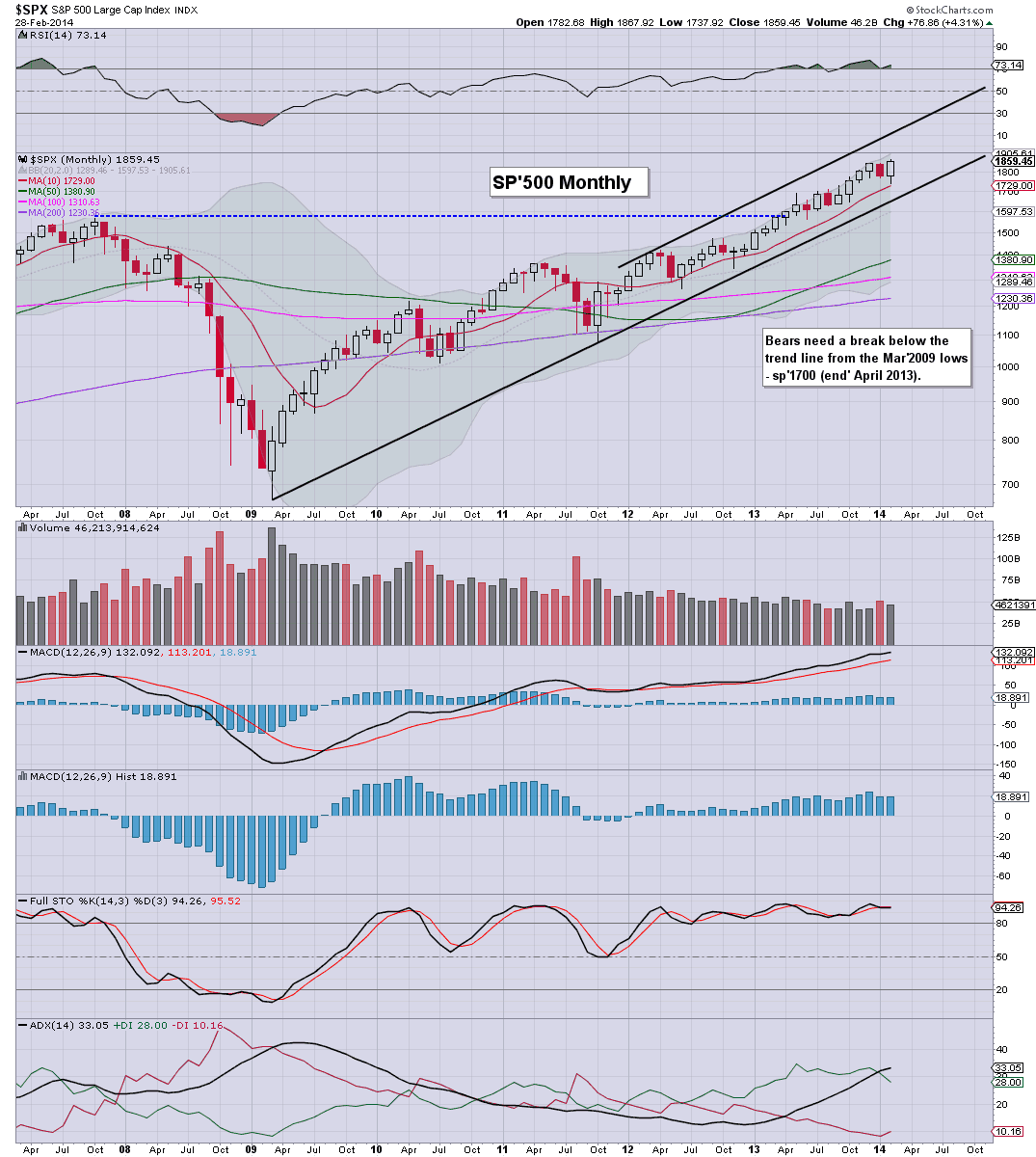 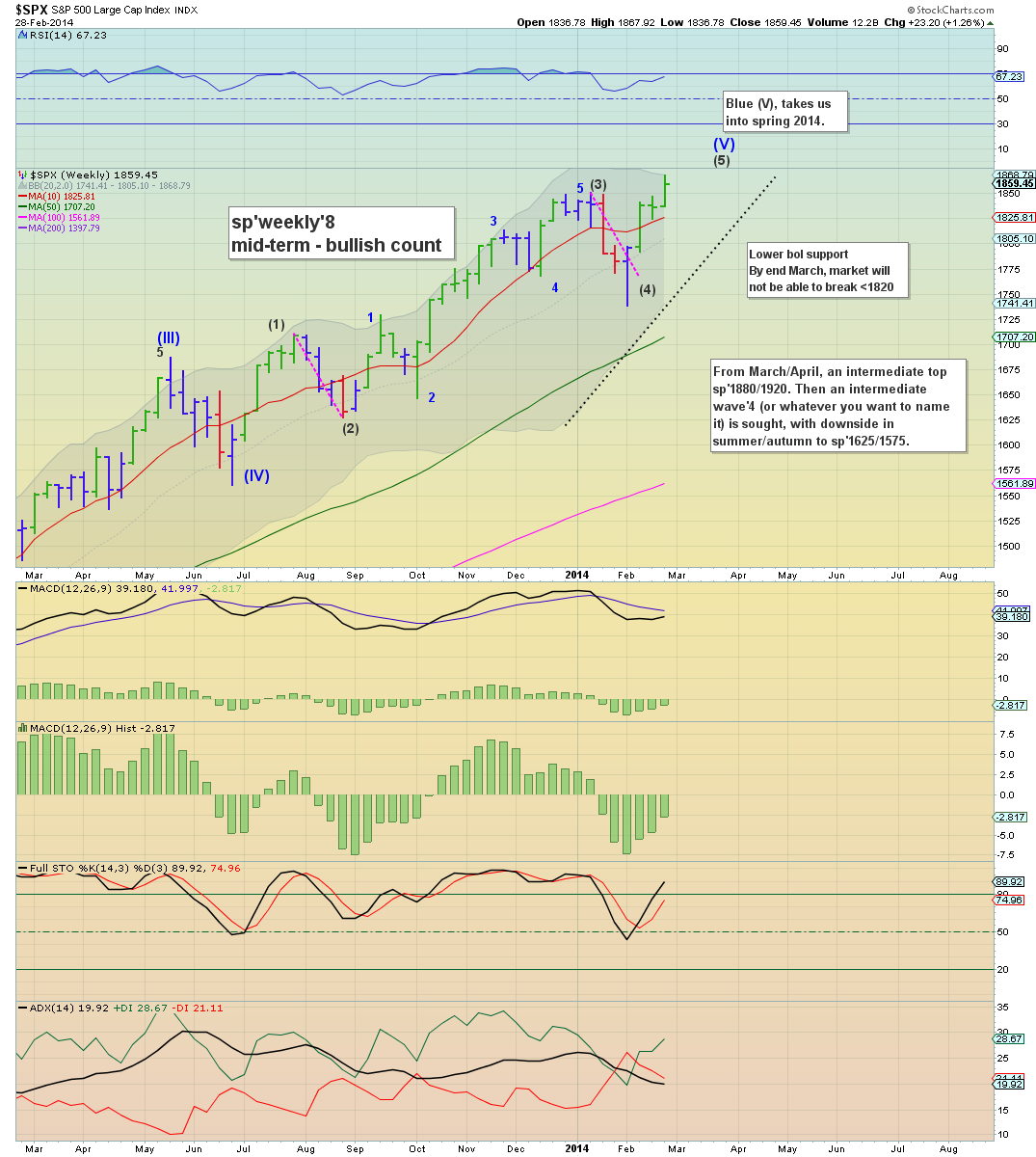 Frankly, for those equity 'doomer bears' out there...still in the market, still surviving, you all deserve a 'warrior medal', simply for lasting this long.

I suppose what could be taken away from today's price action, is how we are seeing increasing market tremors, as a result not of recessionary concerns, but of geo-political ones.

Personally, I'm more concerned about an Asian conflict this summer...China/Japan..but hey, that is a mere hunch..and I sure won't be trading on that kind of thing.
--

More than anything, I am indeed holding to the original outlook that I first posted last summer. This scenario was always seeking a key intermediate'3 top in spring 2014. Next Monday is March'3rd, and frankly..that is close enough to spring in my view.

Best guess remains, a multi-week high in mid/late March, around the next FOMC of March'19. At that point, I will be ready to launch a major short - my first short side trade in almost 9 months. Indeed, we have just another 13 trading days to wait...in my view.

*the weekend post will be on the world monthly indexes
Posted by Trading Sunset at 04:00:00
Email ThisBlogThis!Share to TwitterShare to FacebookShare to Pinterest 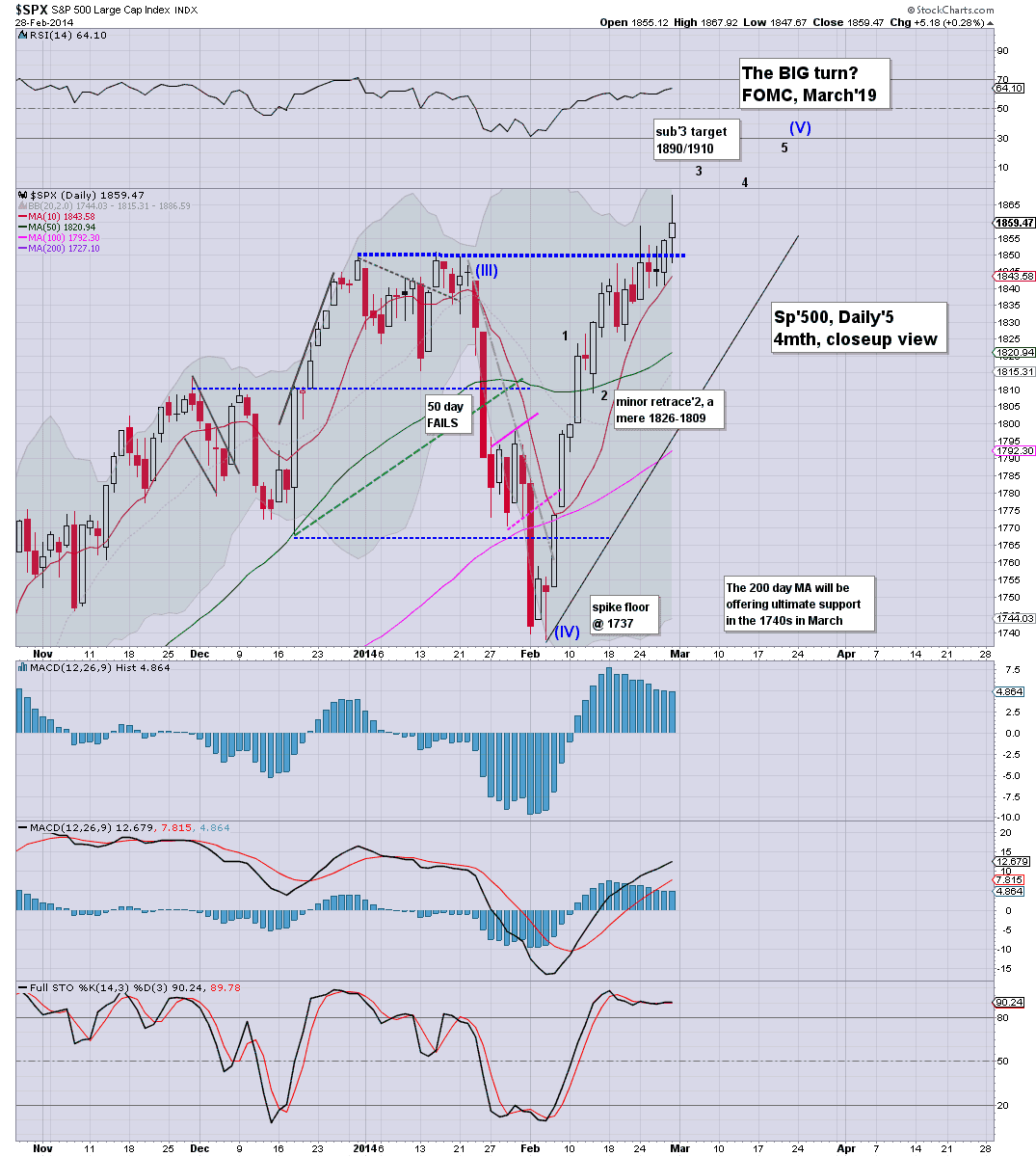 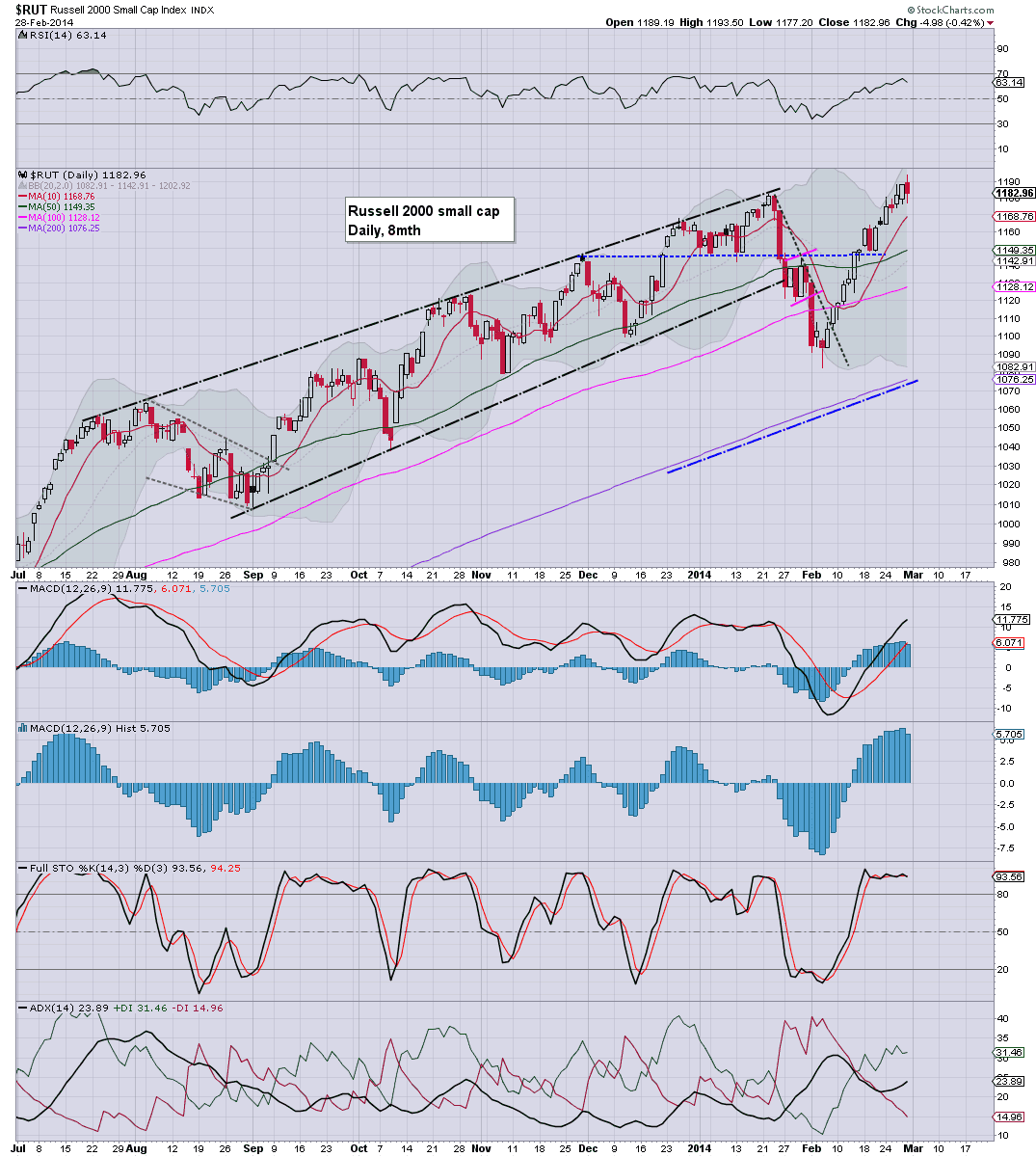 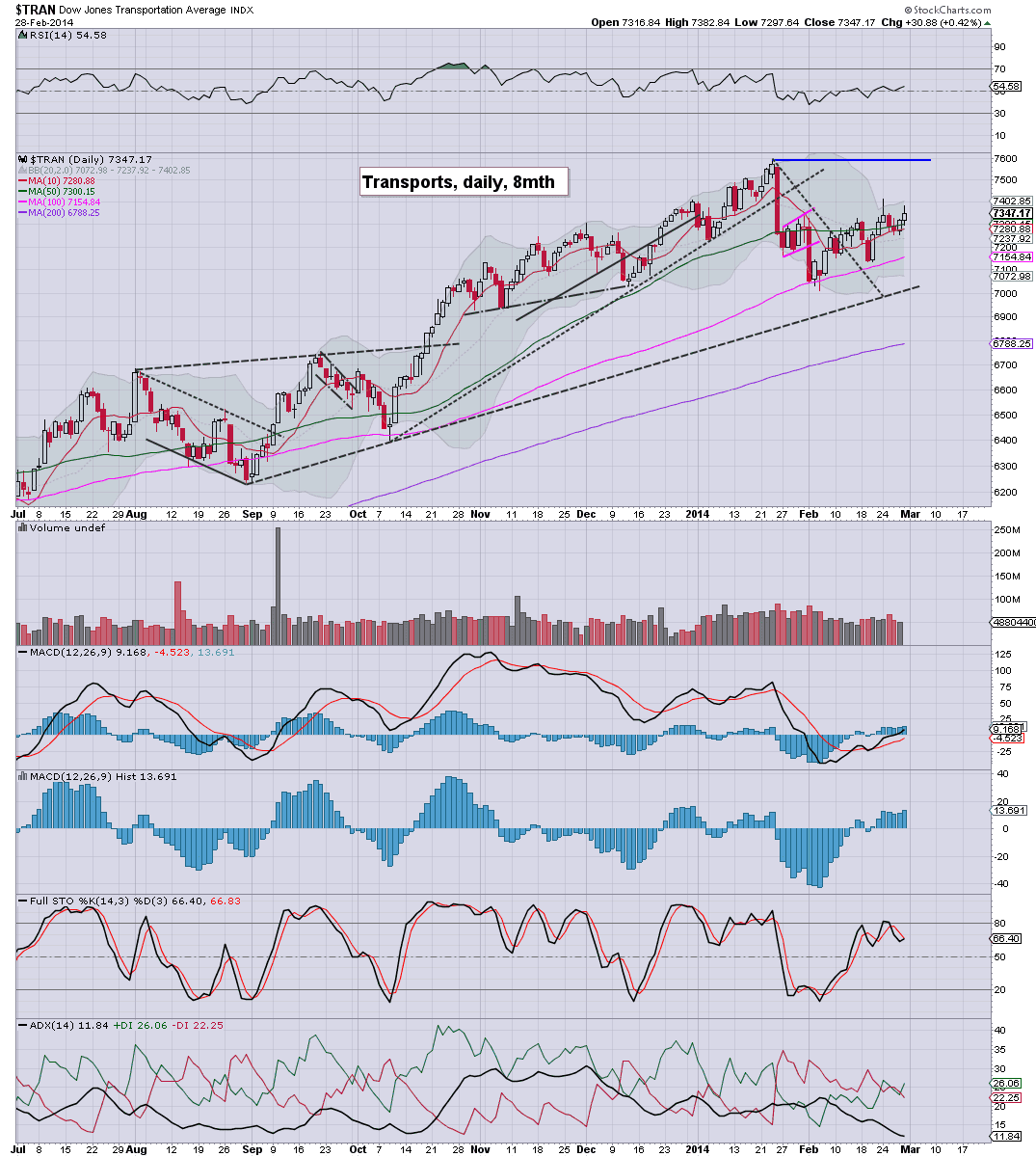 The late afternoon price action sure was pretty wild, but overall, it does little to dent the general up trend. Indeed, as we approach a key intermediate'3 top, I do expect somewhat increased intra-day swings.
-