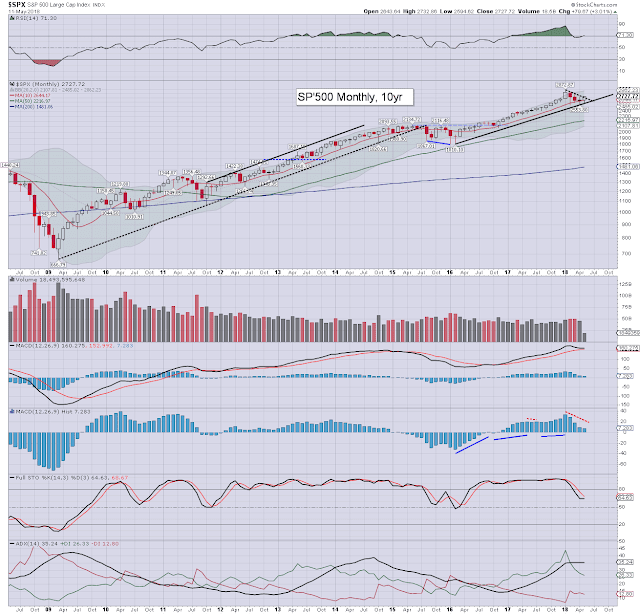 A net weekly gain of 64pts (2.4%) to settle at 2727. The Thursday break above declining trend/resistance from the Jan' high was decisive, and gives some confidence for the summer ahead.

For May, the sp' is currently net higher by 3.0%. Note the key 10MA at 2644, and so far this year we've not seen any monthly settlements under it. Underlying MACD (blue bar histogram) cycle is trying to level out, and a bearish cross is OFF the menu for June.

On balance, original big target of 2950/3047 is back on track. I do wish to emphasise that I expect that zone to act as a concrete wall.

Considering price action from late Jan' to early April, I don't expect my year end target of 3245 to be hit. Instead, I will be seeking a very significant down wave from around sp'3K. Whether that is just another correction (10-20%) or something far more serious, is very difficult to guess right now. As I often note, the ultimate sell signal would be if the fed cut rates. A June rate hike is clearly coming, and thus I'm not bearish for the summer ahead.
-- 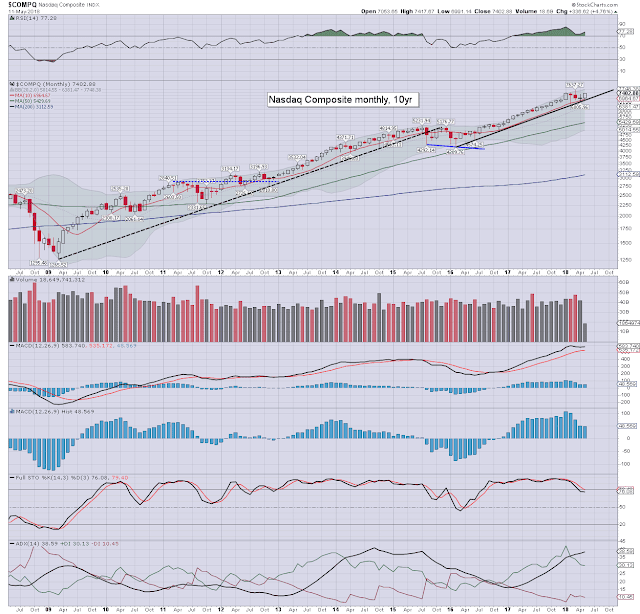 The Nasdaq saw a net weekly gain of 2.7%, settling at 7402. The March historic high of 7637 is only 3.2% higher, and is easily viable within the next few weeks. Underlying MACD cycle has leveled out, as the 8000s appear due this summer. 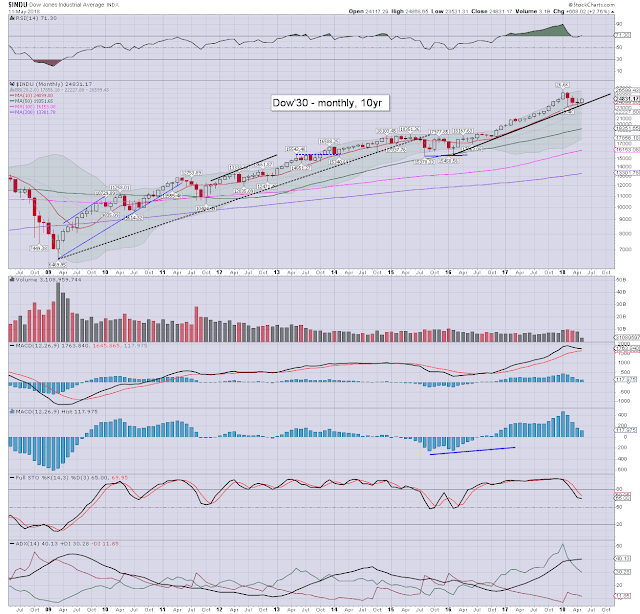 The mighty Dow climbed 2.3% to settle at 24831. Price structure of a triangle, or bull flag/pennant, has provisionally played out. Soft target is the upper monthly bollinger, currently at 26382, which is 6.2% higher, and likely out of range until at least late June/early July. Keep in mind the Jan' historic high of 26616, and the next key Fibonacci extension/extrapolation of 26702. If the latter is surpassed, it would be highly suggestive that the next major down wave will be just a correction, rather than an all out collapse wave. 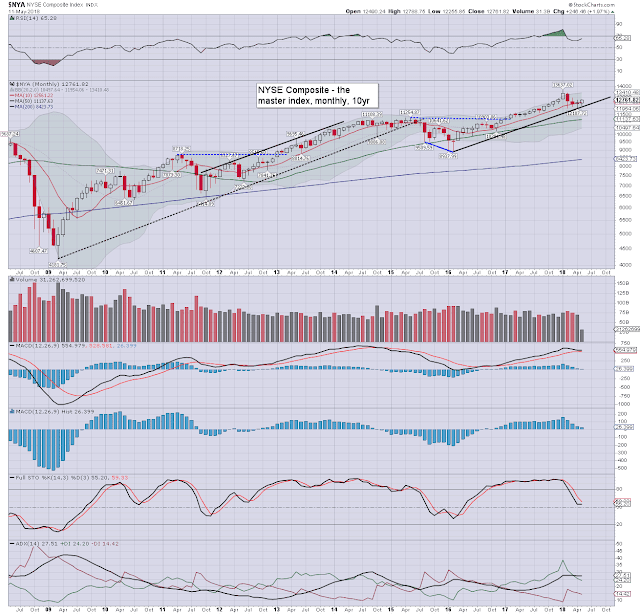 The master index saw a net weekly gain of 2.1%, settling at 12671. Price structure since late Jan' is arguably just a multi-month bull flag, that has already provisionally played out. 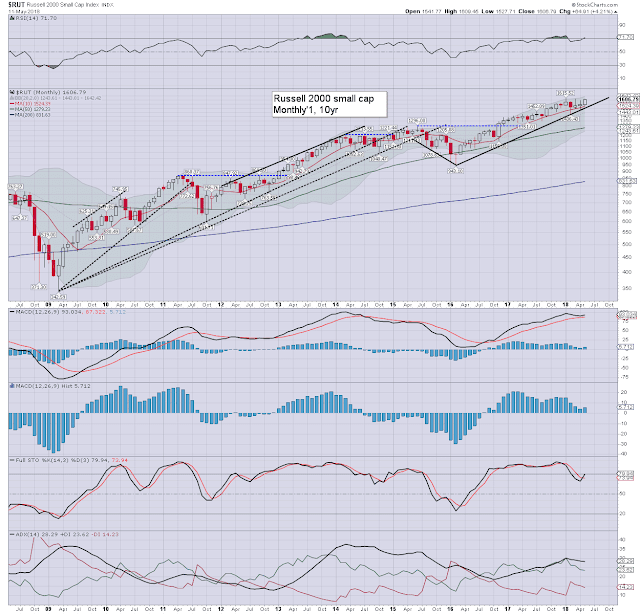 The second market leader gained 2.6% to 1606. It is very notable that the R2K is currently net higher for a THIRD consecutive month. Friday saw a high of 1609, which was just 6pts shy of the Jan' historic high of 1615. Indeed, new historic highs look probable within the near term. Underlying macd is actually ticking back upward, as a bearish cross is off the menu until at least July. 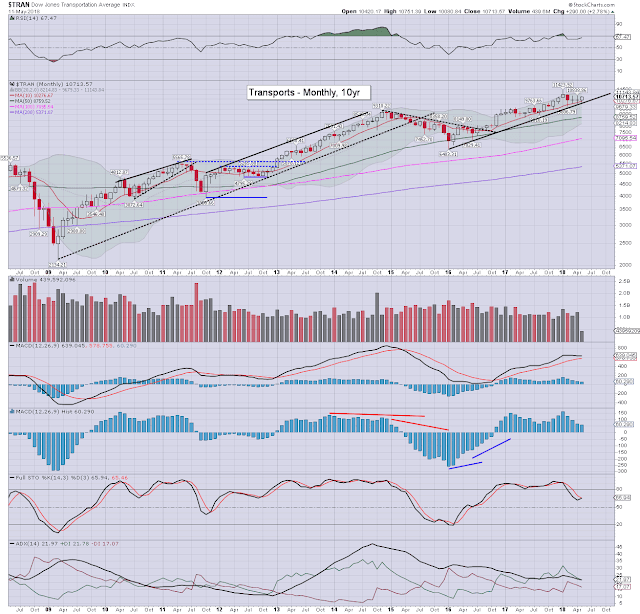 The 'old leader' - Transports, lead the way higher this week, gaining 3.3% to 10713. For May, the tranny is net higher by 2.8%. The current gains are especially impressive, considering the continued m/t strength in WTIC. Transportation stocks are going to be particularly pressured via higher energy prices. We're seeing relative weakness within the airlines on any day where oil is sig' higher.
–

All six of the main US indexes saw sig' net weekly gains, lead higher by the Trans and Nasdaq.

All six of the main US indexes are currently sig' higher for May.

Downward price momentum is reducing, and a bearish macd cross is not currently due in June. 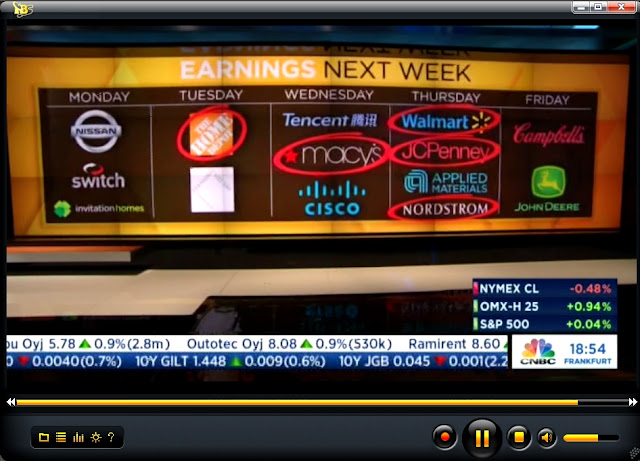