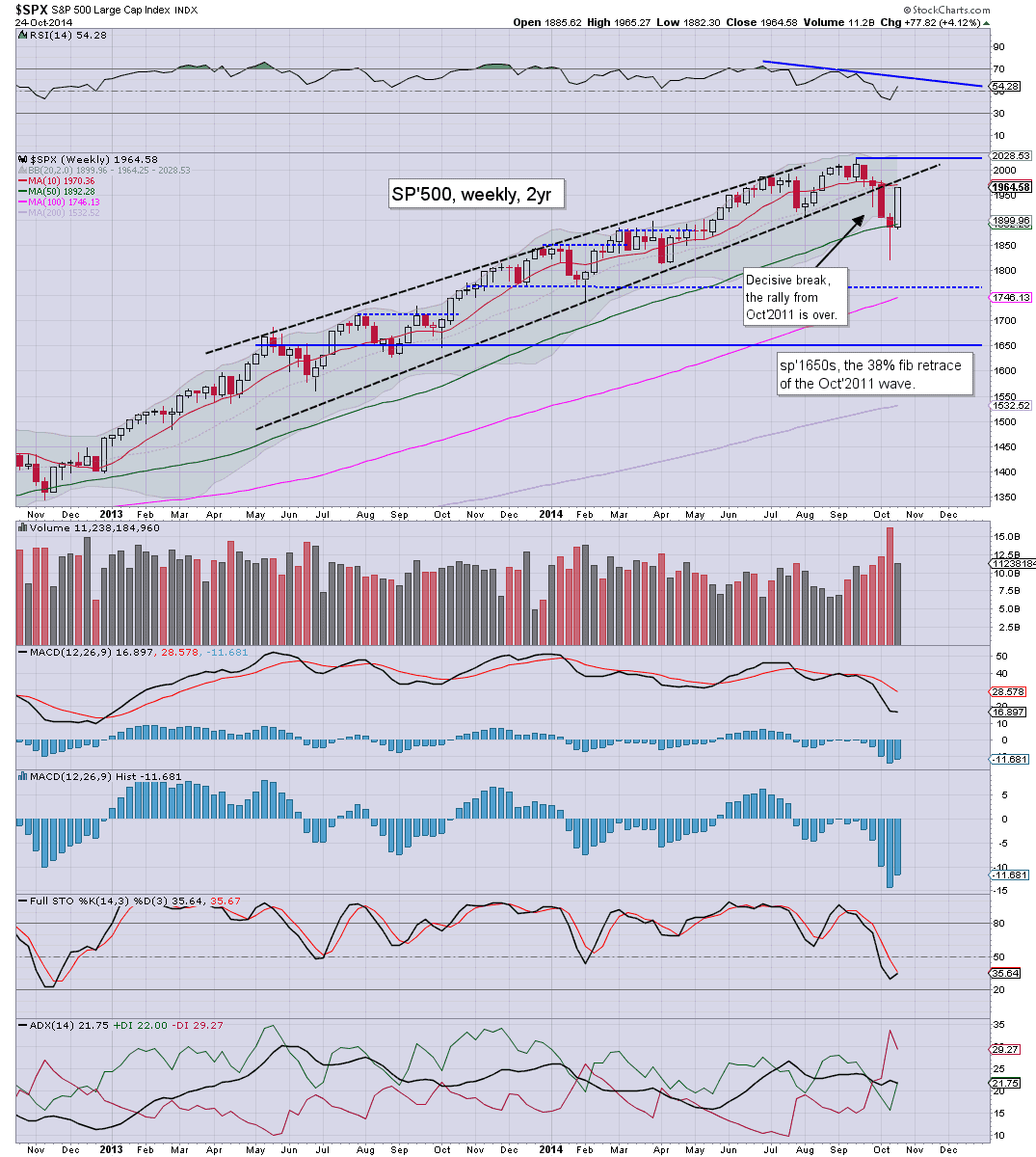 Underlying MACD (blue bar histogram) remains deeply negative, but has (not surprisingly) ticked higher this week. If the recent low of 1820 fails to hold in the next down wave, next notable supports are 1760 and 1650, the latter of which is the 38% fib retrace of the giant wave from Oct'2011. 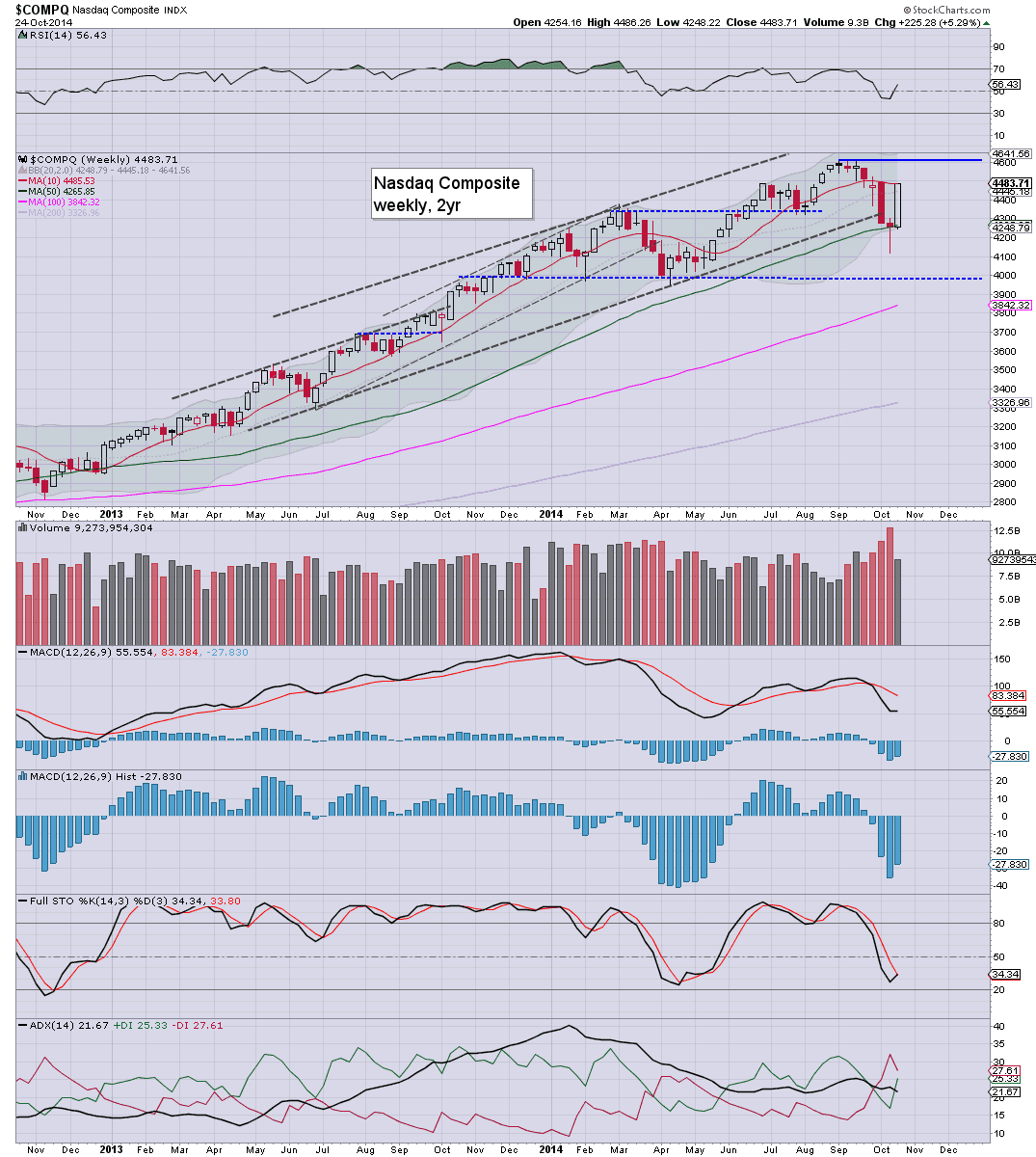 The tech' was the strongest index this week, with a huge gain of 5.3%. The weekly close was a fraction under the weekly 10MA of 4485. There will be stiff resistance around 4500, after that, all that is left to clear is the Sept' high of 4610. 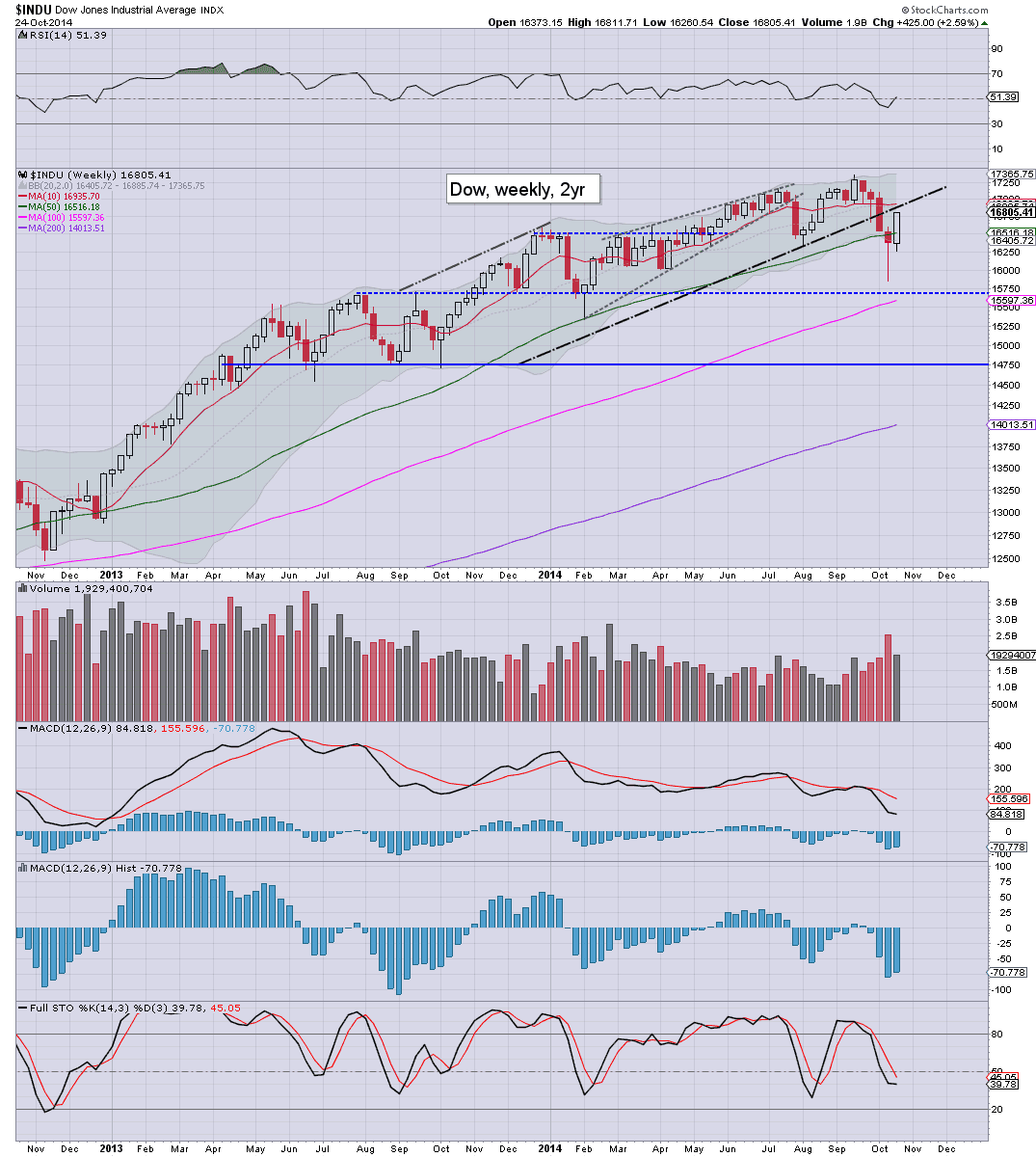 The mighty Dow was the laggard this week, but still gained a very significant 2.6%. Next key resistance is around the 50dma around 16900. The big 17k threshold will be tough to break through. If the equity bears can begin a major new wave lower, first target is 15700, and then 14700. 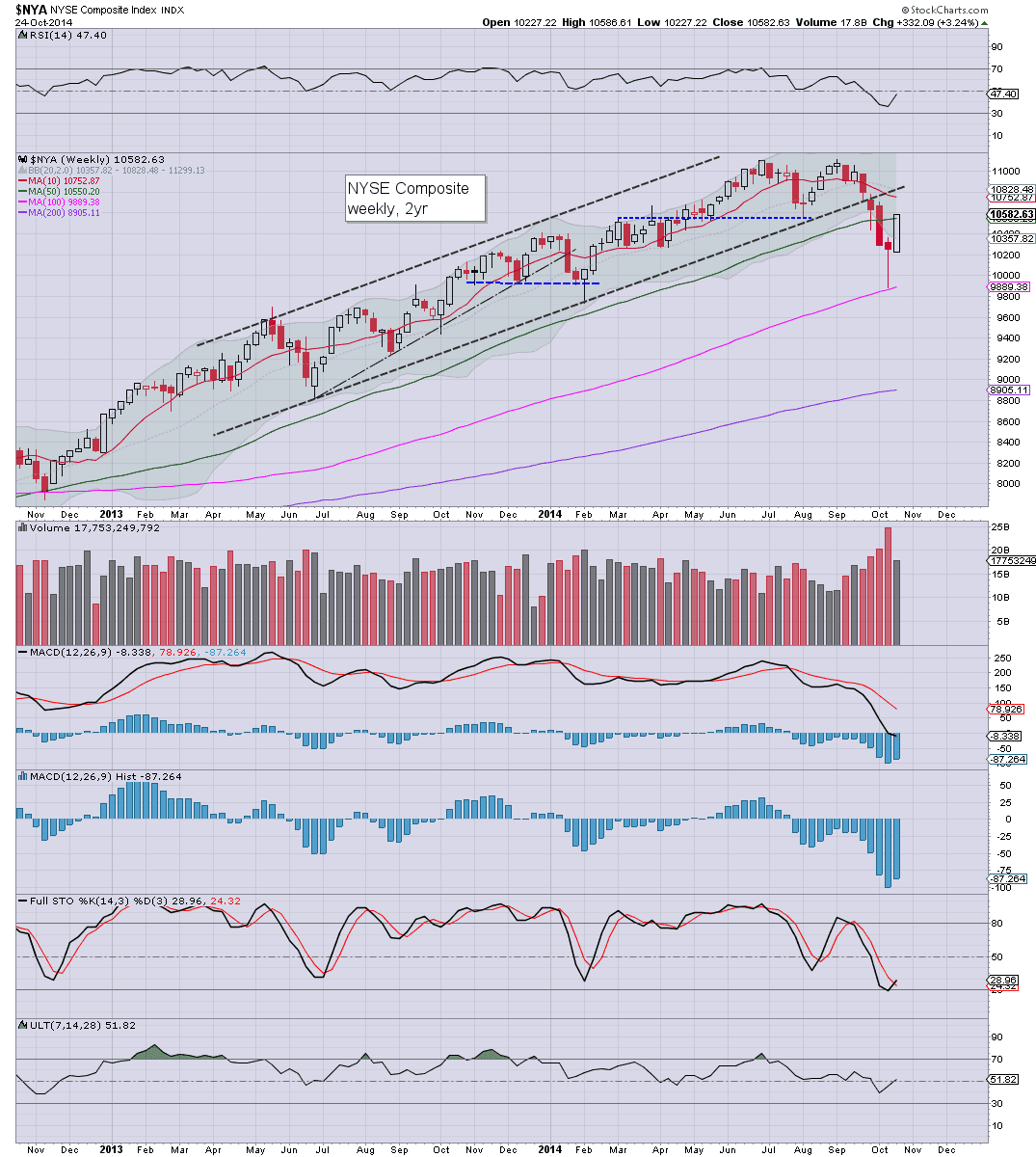 The master index gained 3.2% this week, but remains somewhat notably under the weekly 10MA of 10752. Breaking back into the 11000s will be hard, not least with QE ending. The second market leader gained a powerful 3.4%, and is back above the old broken floor of 1080. Equity bulls need to break back above the previous lower high of 1183, but frankly.. that just doesn't look viable for some months to come.

The R2K remains the weakest of the US indexes, and with the key floor of the 1080s decisively broken, the big 1000 threshold should (at least in theory) be tested within the near term. Considering the R2K was in the 1040s just last week, the low 900s are not out of the range of 'reasonable' possibilities. 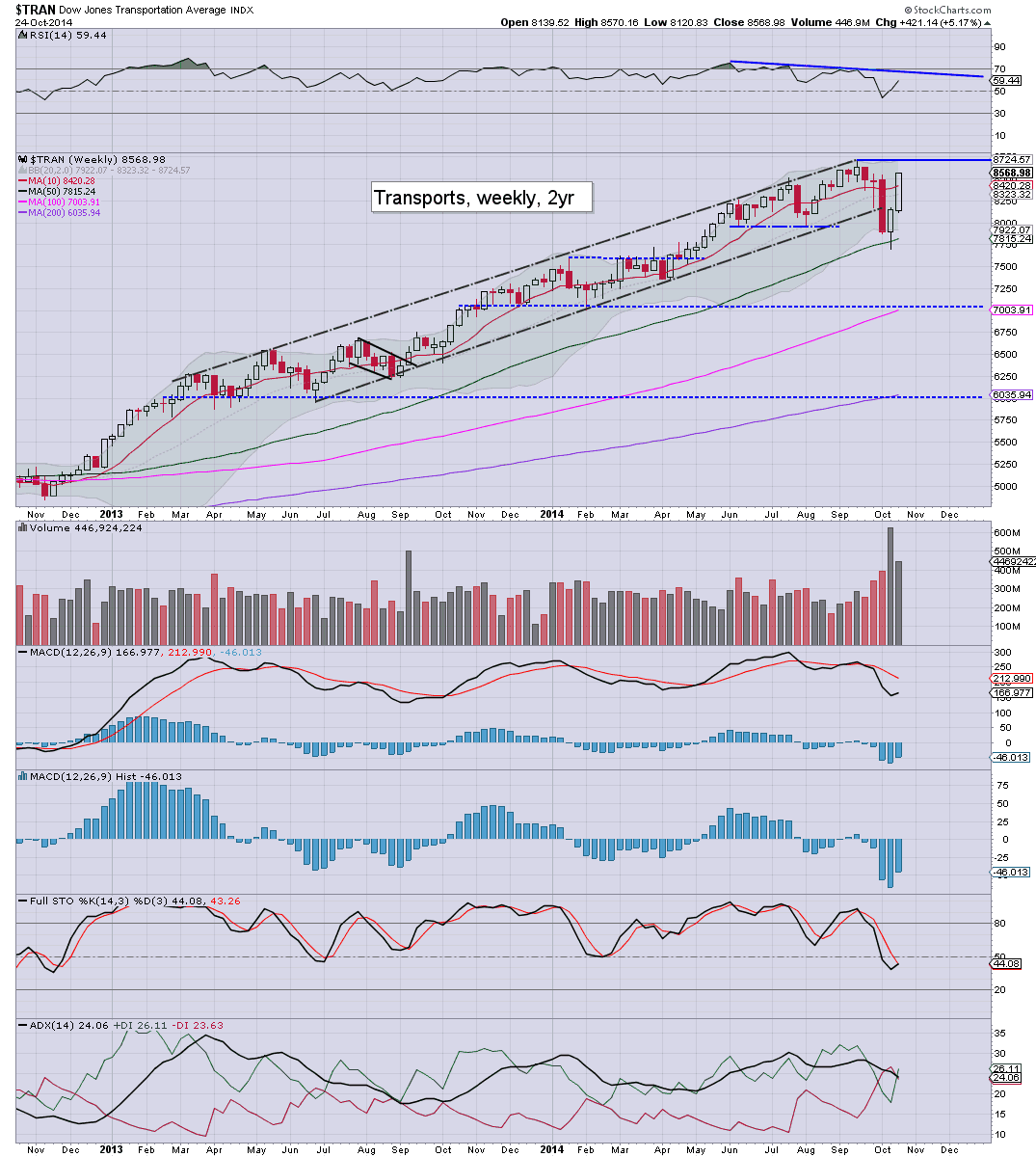 The Tranny gained 5.2%, settling the week at 8568, a mere 146pts (1.8% or so) below the recent historic high. Those equity bears seeking another major wave lower before year end, should look for the Trans to remain under the Sept' high. If the market does unravel in the remainder of the year, next key supports are the big psy' levels of 7k and 6k.

Despite the strong gains, most indexes face multiple aspects of resistance, although the Trans 'old leader', is already close to breaking a new high.

Taking the indexes as a collective, the market has seen a very strong bounce, but some serious technical damage was done to the bigger monthly cycles, with trends - stretching back to the Oct'2011 low, broken. It remains the case that this ramp from 1820 to the 1960s could merely be a bounce, rather than the start of a new multi-month wave that takes the market to new historic highs.

A very busy week is ahead... and it actually begins on Sunday. The ECB is set to release detailed results of a bank stress test (12pm CET, 8am EST). A sig' number of banks are likely to be required to raise extra capital, and that might rattle the market early Monday.

Wed - FOMC (2pm) Market is expecting QE3 to be terminated, with a renewed statement on 'low rates'. There will not be a Yellen press conference.

With Friday being end of the month, price action will likely be more dynamic.

So... a very powerful bounce continued this week, but does that rule out much lower levels before year end? Absolutely not, and a bounce was both natural.. and was indeed expected.

Equity doomer bears should be seeking an October closing in the sp'1950s.. or lower. Anything much above 1970, and it will greatly ruin the chance of renewed major downside across Nov/December.

Monday will see the last of the QE fuel. It has been a full two years (Sept'2012), since the US capital markets have not had new money thrown at it. 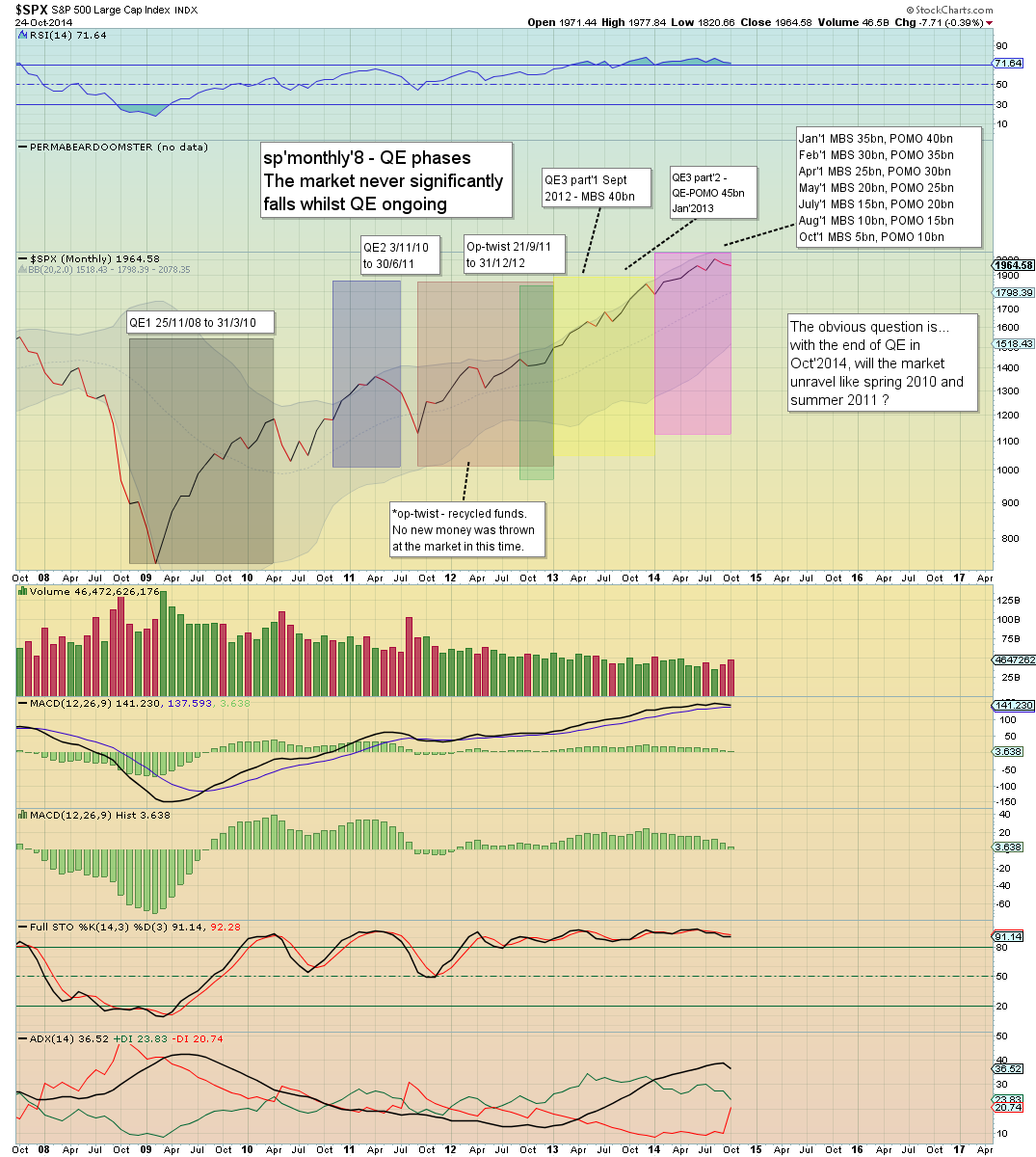 The last two occasions that QE ended, spring 2010, and early summer 2011, ended with very sharp equity declines. Of course, this time QE has been tapered, but still,, as has been the case many times since early 2013, the market does get upset at the thought of 'going it alone'.

As for me, I am entirely on the sidelines, and will seek to launch a major short on Wednesday afternoon... after the FOMC announcement. So long as price action/structure and the smaller 15/60min cycles look 'toppy', I'll very likely initiate a trade.

Whilst the bull maniacs have enjoyed a huge equity bounce from sp'1820 to 1965, Oil prices have remained very weak. With the $80 threshold already taken out, there is little reason why prices won't slip to the $70s.. or even 60s into early 2015. 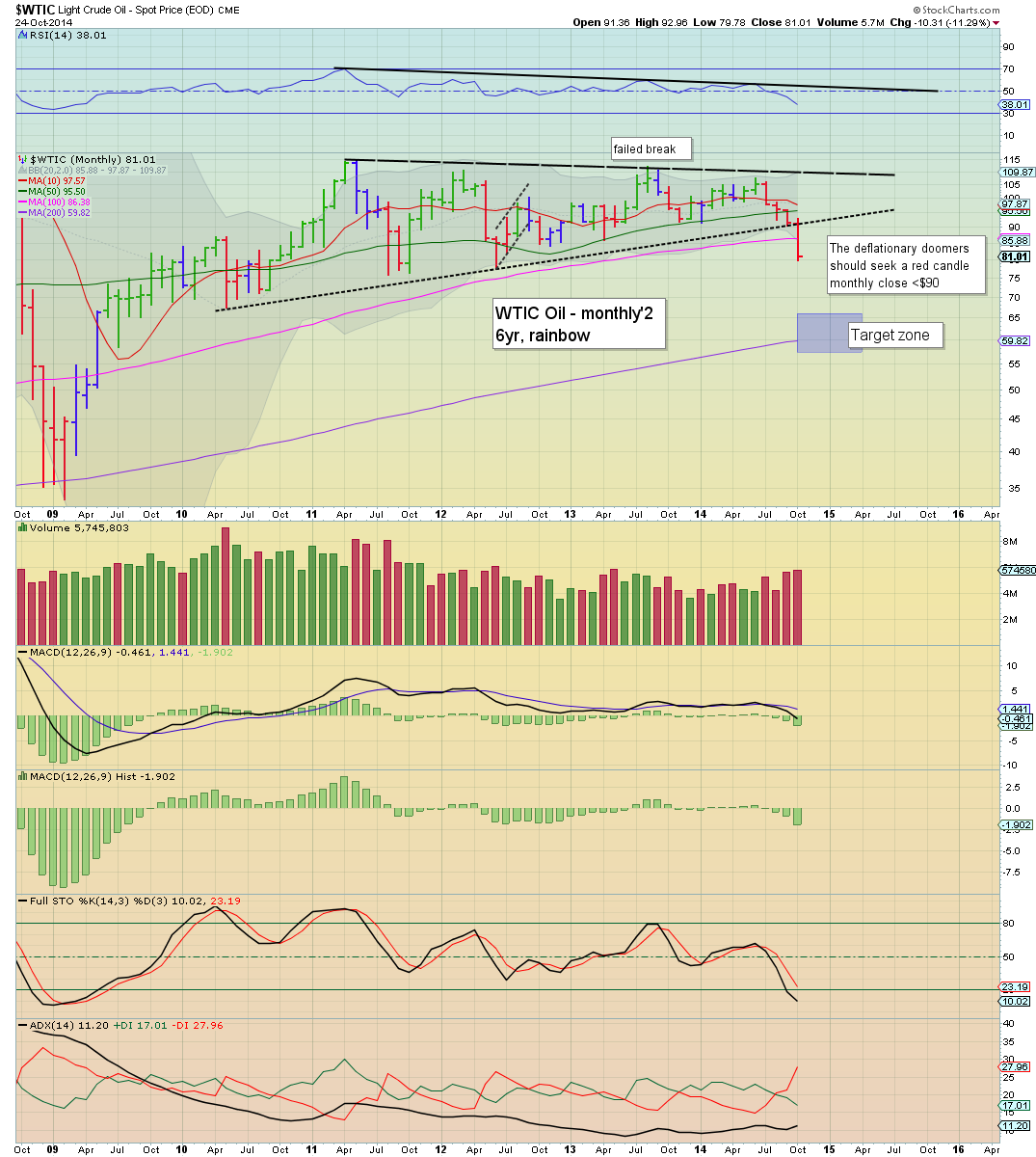 Yes... I know there are MANY reasons, not least those of supply/demand that will determine prices, but without getting into all of that (on a Friday night)... what is clear, prices are LOWER.

The key support of $90 - something I have been highlighting for almost TWO years, has been decisively broken. The fact we're already seen the $79s is added clarification of the underlying weakness.

Without question, the lower Oil price should be seen as a deflationary warning (along with Copper), and it bodes for much lower equity levels into year end.

ALL industry will of course benefit from lower energy costs, so, it does bode for a boost to earnings for Q4 and probably also at least Q1.

US equities closed moderately higher, sp +13pts @ 1964. The two leaders - Trans/R2K, settled higher by 1.0% and 0.2% respectively. Near term outlook is for chop into the middle of next week, before the next opportunity of a major wave lower. 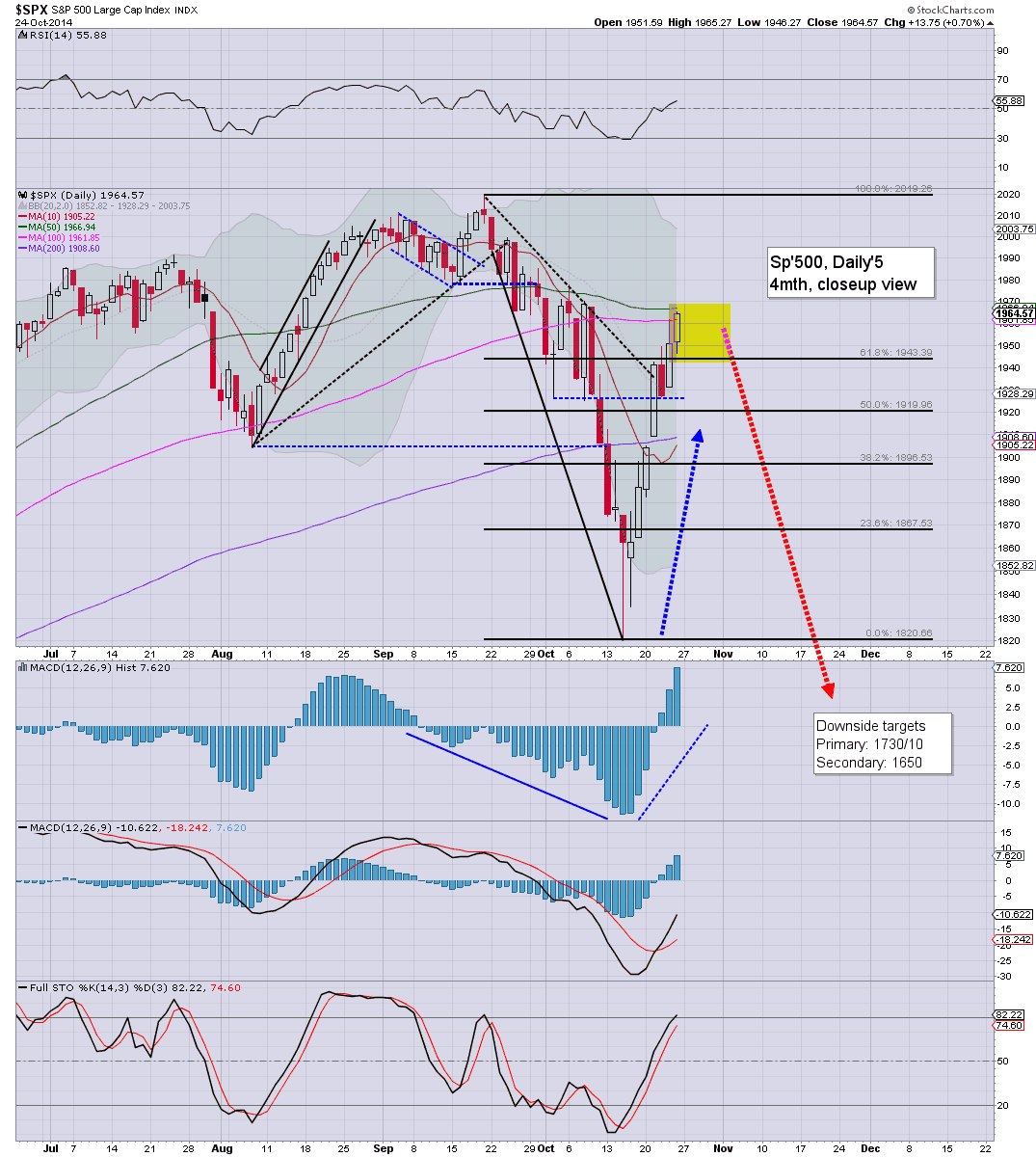 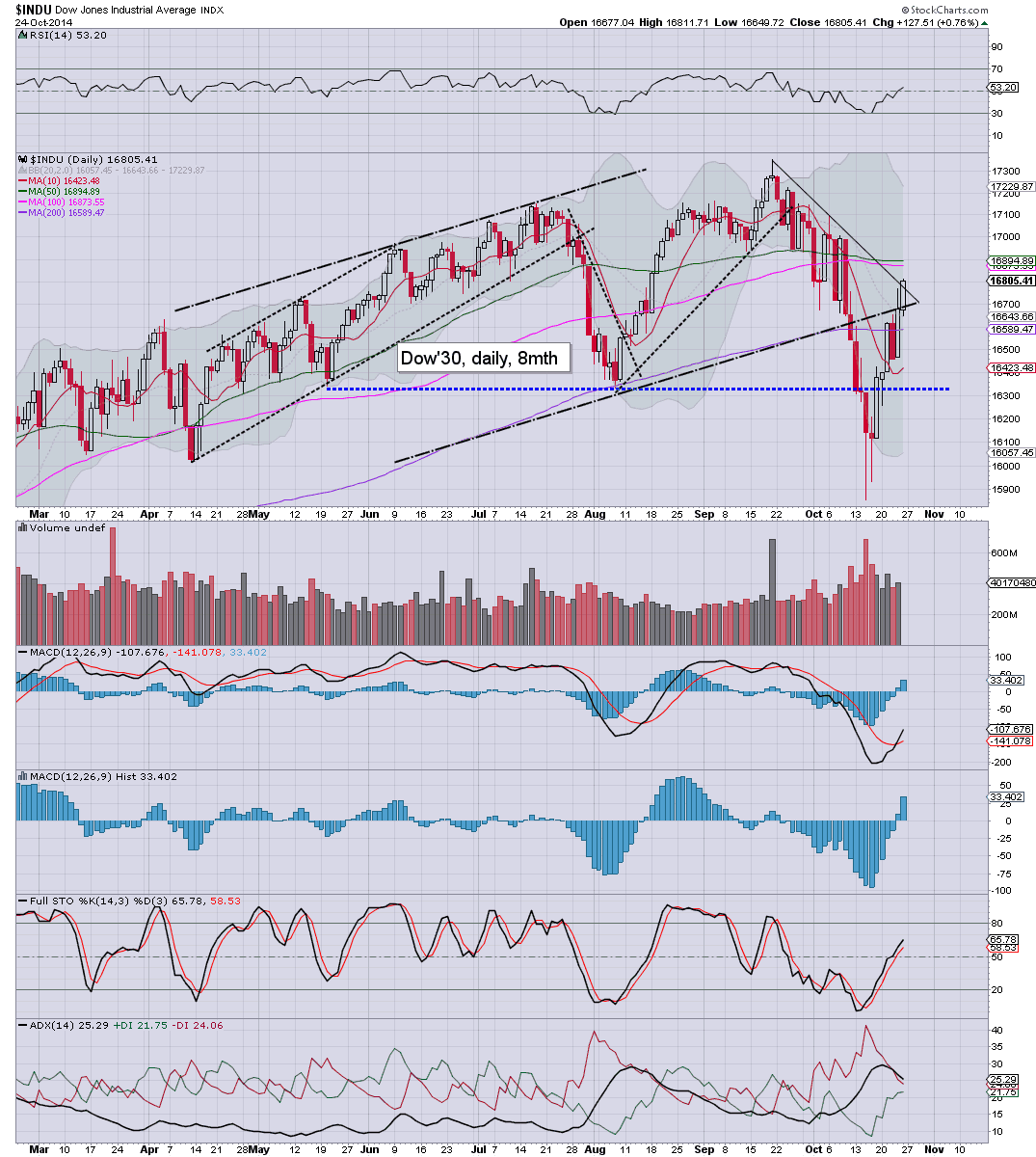 The Dow is close to the 50 dma, and there is going to be some strong resistance around 16900. I find it very difficult to believe the bulls can keep pushing to 17k.. and beyond.