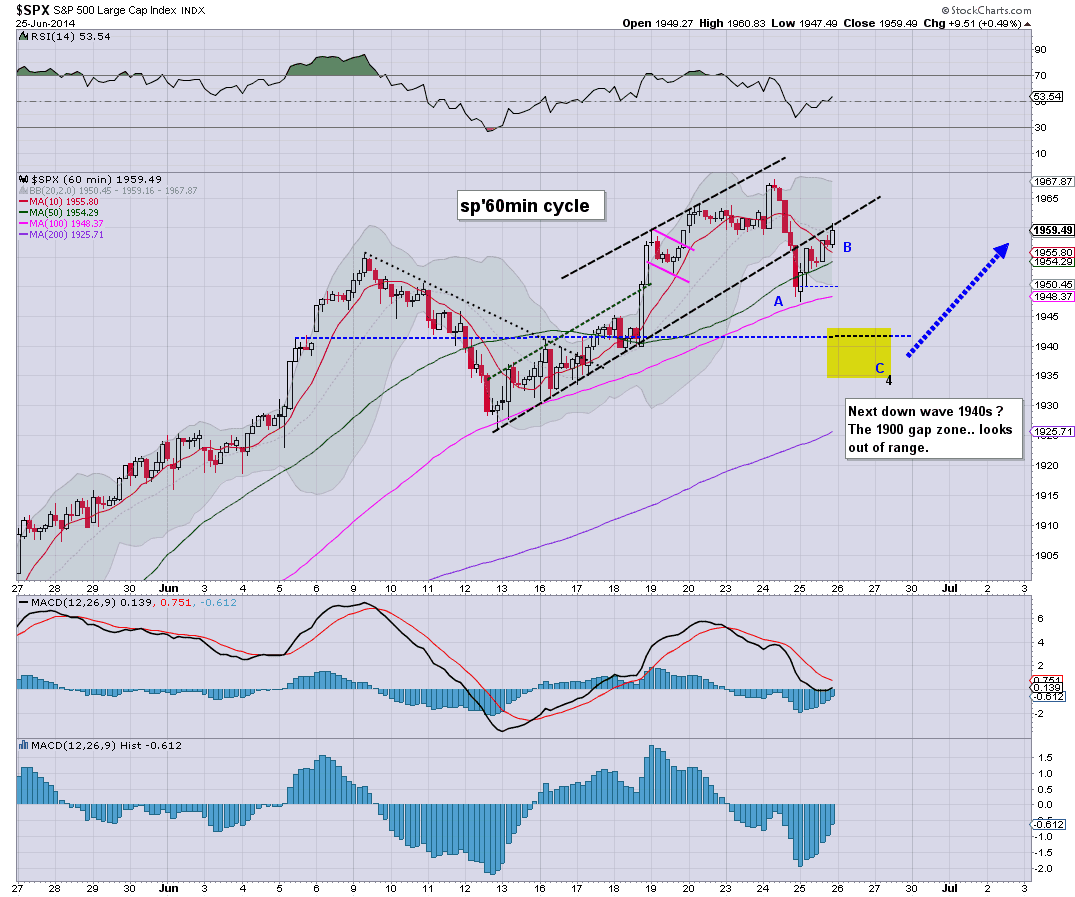 *Time for another pair of games... I'm going with the French game
--

Despite failing to roll lower into the close, it makes little difference.

Price structure is a very clear bear flag - call it a B wave if you like, and we're set for lower levels tomorrow. I'd not be surprised if we see sp'1940/35 tomorrow at some point, as part of a mini washout.

time for Ecuador vs France!
Posted by Trading Sunset at 21:01:00
Email ThisBlogThis!Share to TwitterShare to FacebookShare to Pinterest

US equities are holding moderate gains, but look set for weakness into the close. Price structure is a near perfect bear flag, and equity bears should be seeking a break under 1955 to confirm a new way down is underway. Primary downside target remains 1940/35. 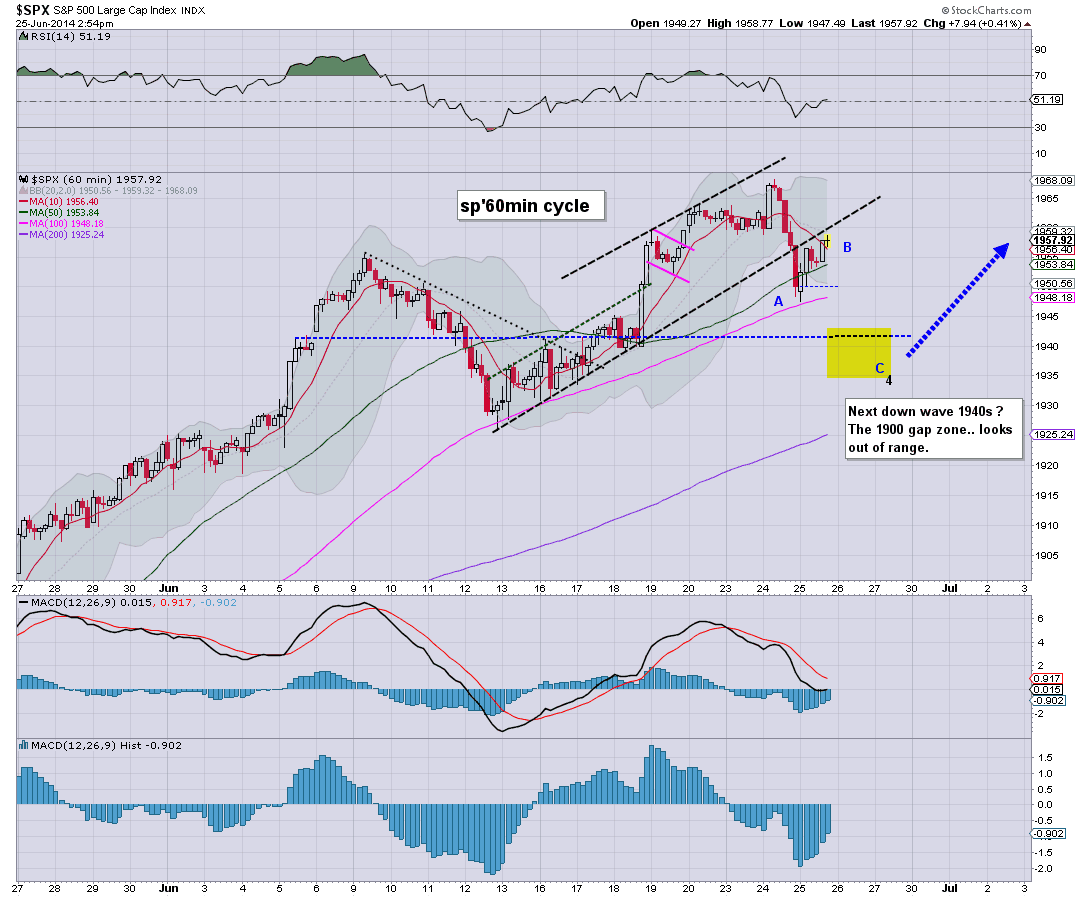 Well... 15/5min cycles are PRIME for breaking lower into the close.

Lets see how many of the rats want to exit into the close.
-

come on bears..where are you?

2pm update - churning before the next wave lower

US equities are holding moderate gains, but another down wave is likely in the near term.. possibly beginning before the close of today. Primary downside remains 1940/35 zone.. from where the market should rally into July. 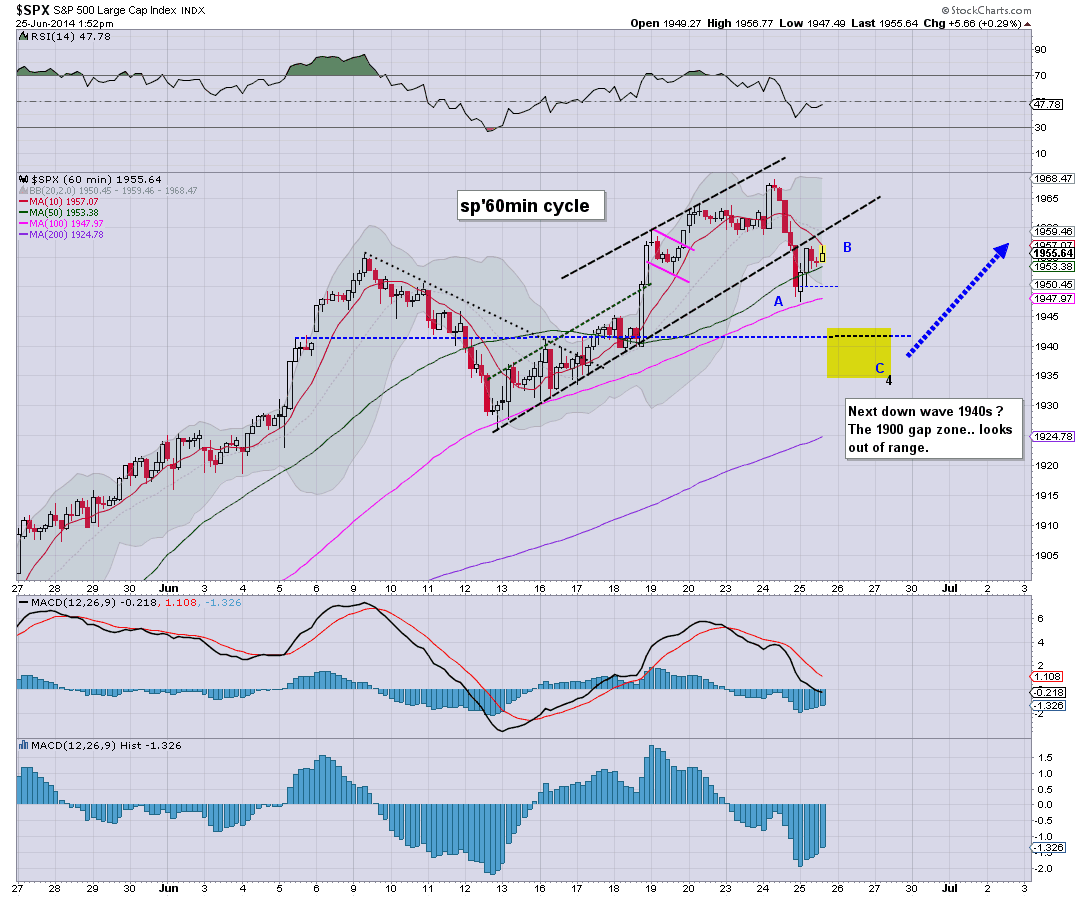 So...two hours to go...lets see if we roll over again.

Posted by Trading Sunset at 18:52:00
Email ThisBlogThis!Share to TwitterShare to FacebookShare to Pinterest

US indexes are in churn mode...probably close to completing a B wave. The market will likely see renewed weakness in the late afternoon. Primary downside target zone remains sp'1940/35, before renewed strength into July. 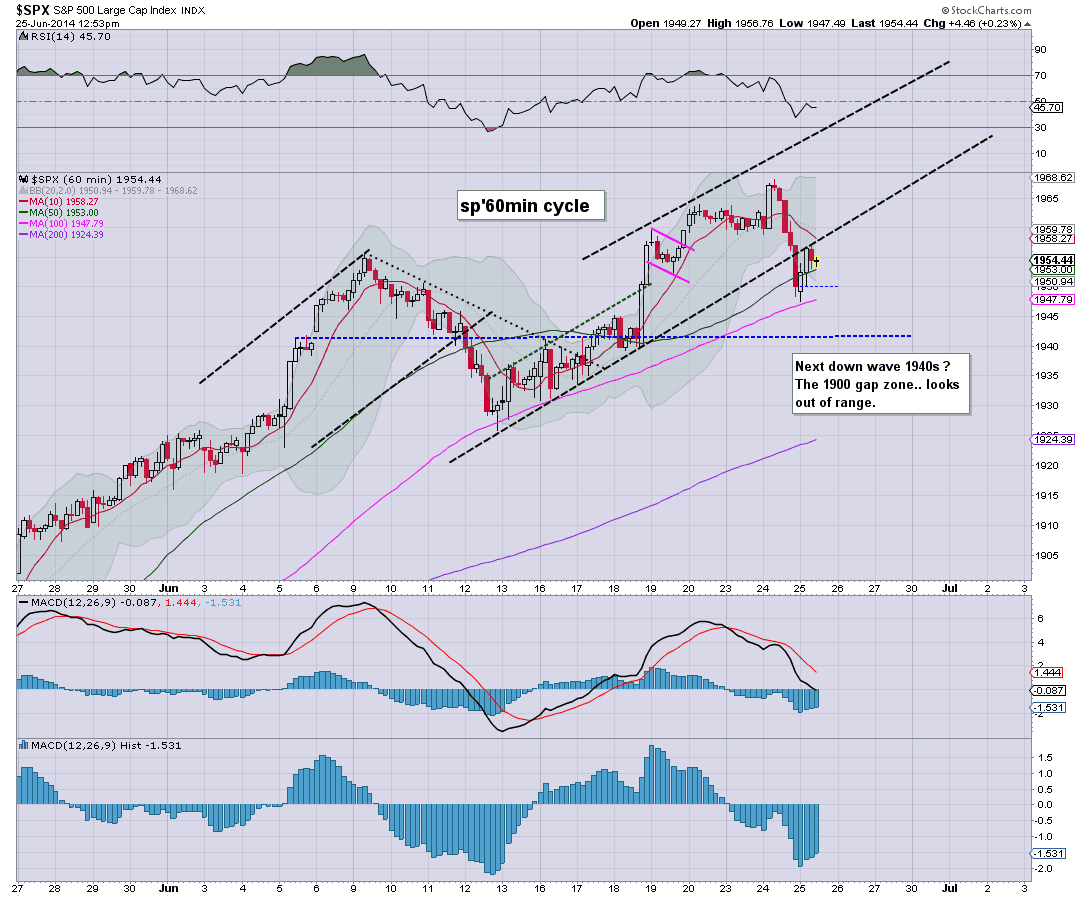 From a chart perspective, a rather classic B wave.. back testing the old broken mini trend/channel.

We'll likely see some weakness into the close, with follow through tomorrow.
-

back to the game... I'm watching Nigeria/Argentina
Posted by Trading Sunset at 17:54:00
Email ThisBlogThis!Share to TwitterShare to FacebookShare to Pinterest

Whilst the indexes churn out a B, 2, or whatever you wanna call it up wave, we have another two big games in the World cup. London city is filled with flags.. not least those supporting Iran - who face Bosnia and Herzo' this lunch time. 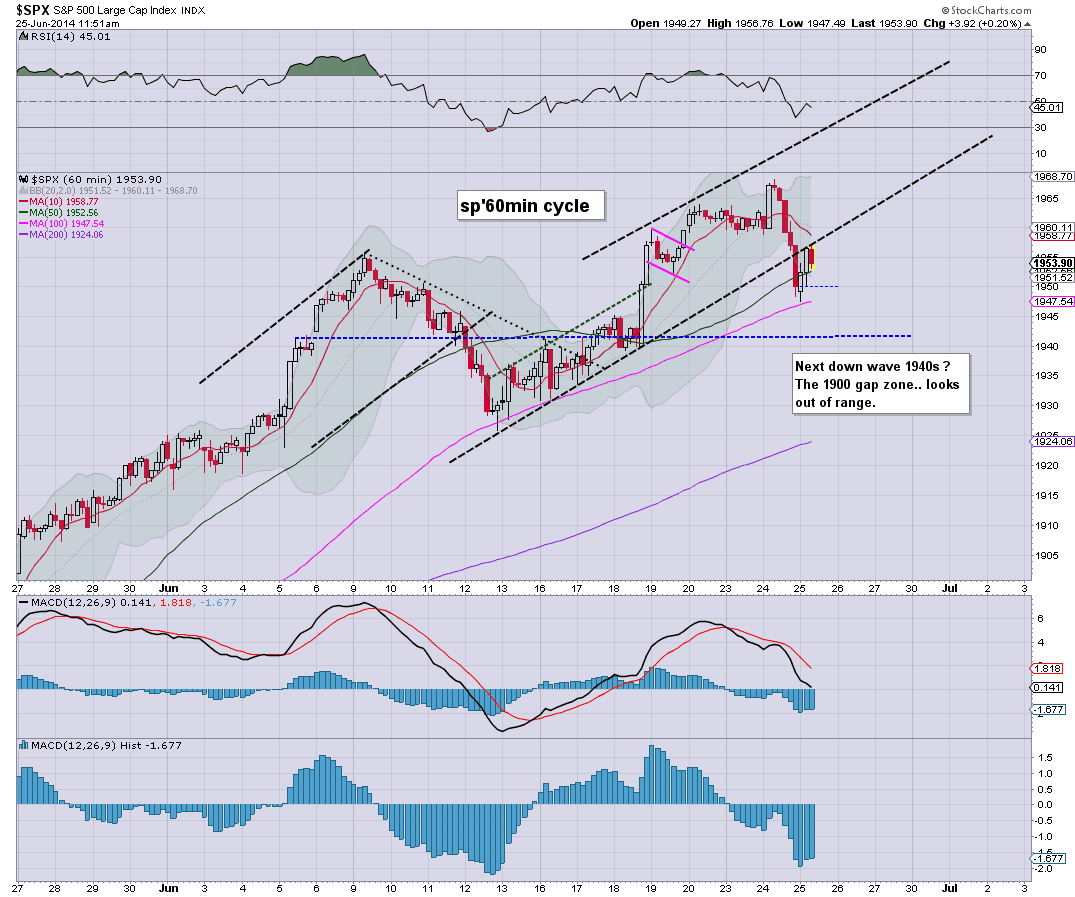 Well, its time for kick off, and frankly...I'm going to focus mostly on that.

*I'm just home from a minor venture.. and there are indeed a fair few Iranian flags being flown from the passing traffic..
-

WFM is higher by 0.9% in the $39.30s, but I'm concerned at how much it will fall in the next index down wave. If I'm lucky, it'll at least be able to remain flat...before the market rallies into July.

back at 1pm
Posted by Trading Sunset at 16:53:00
Email ThisBlogThis!Share to TwitterShare to FacebookShare to Pinterest

US indexes continue to push higher..if slowly, from the opening minor declines. The sp'500 looks set to climb for a few more hours..before another roll over.. late today.... or Thursday. In the scheme of things.. it makes no difference. Downside target zone remains 1940/35. 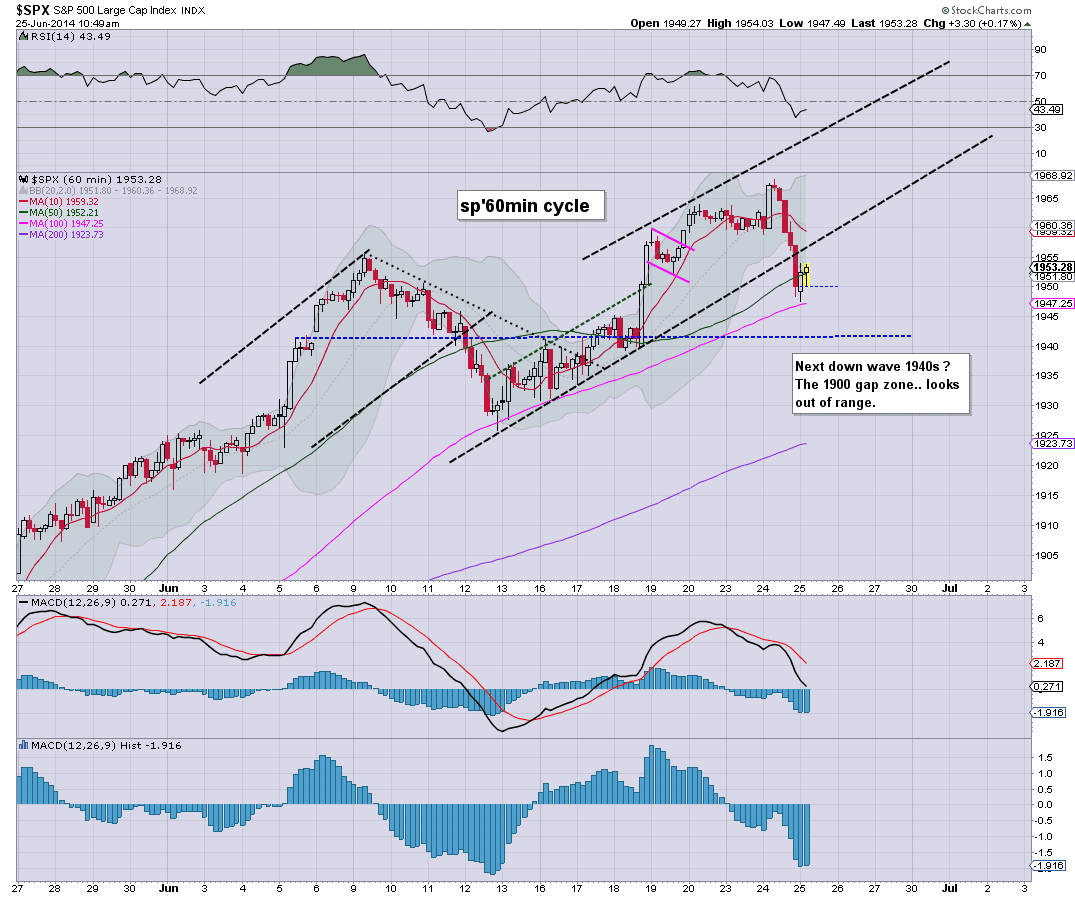 Arguably, anyone looking to go long..should get a chance in the 1940/35 zone this week.

-
*WFM is even more annoying that yesterday.... until it is back in the $40s.. I'm not going to be in the best of moods.
Posted by Trading Sunset at 15:53:00
Email ThisBlogThis!Share to TwitterShare to FacebookShare to Pinterest

With the lousy GDP data, indexes open a little lower, but we're already seeing a pretty clear opening reversal. Indexes look set to battle higher across much of today, with the sp'1955/60 viable. From there... a further wave lower into Thursday seems very probable... 1940/35. 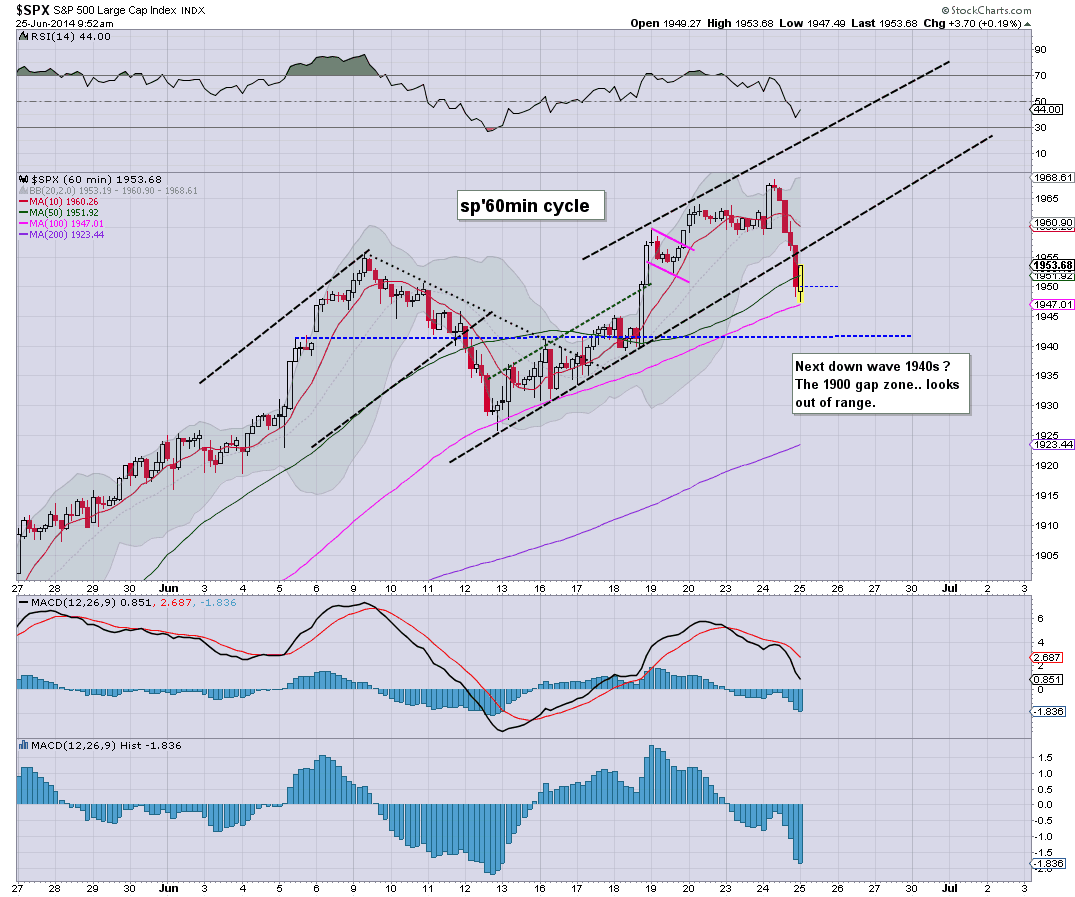 So...Q1 was a deep contraction for the US economy.. and that was when QE was still running at a rate of 900bn a year.

Meanwhile...we have green indexes...and the $3bn of QE fuel hasn't even been distributed yet.

--
*naturally, not only have WFM failed to hold the opening gains, but it has turned red.. and the US market recovers. Utter... fail.


Posted by Trading Sunset at 14:54:00
Email ThisBlogThis!Share to TwitterShare to FacebookShare to Pinterest

Good morning. Futures are a touch higher, sp +1pt, we're set to open at 1950. Precious metals are weak, Gold -$5.  With sig' QE-pomo this morning, equity bears are going to find it difficult to push lower. A minor bounce seems likely, before a further wave lower late today.. or Thursday. 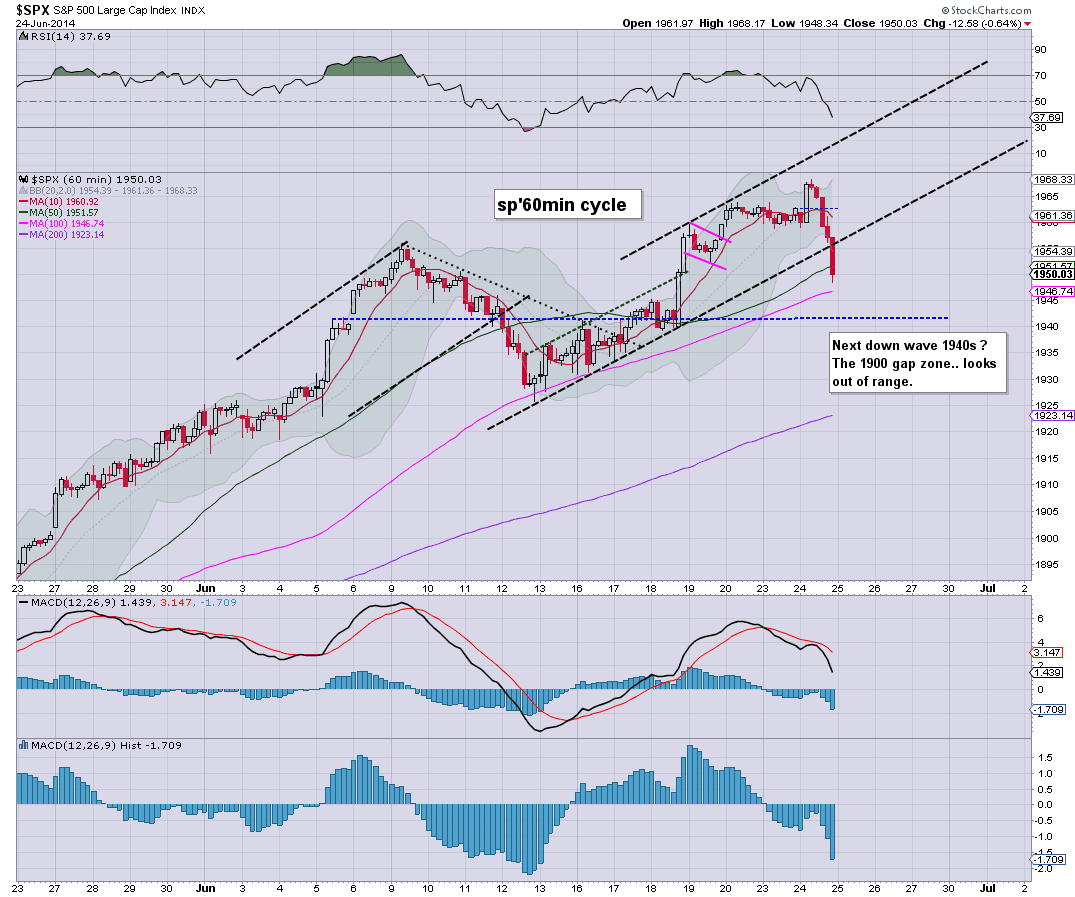 We have a clear break of short term trend on the hourly.

Equity bears getting an opportunity to exit at the open...before a latter day ramp...probably back to 1955/60 zone.

The QE today will most certainly help.

Bears beware... sig' QE coming at 10am
Posted by Trading Sunset at 13:21:00
Email ThisBlogThis!Share to TwitterShare to FacebookShare to Pinterest

Beware of the bearish hysteria

This afternoons equity reversal was a pretty significant one, but it does nothing to the primary trend. Barring a break under sp'1930, the market still looks set for broad upside into mid July. 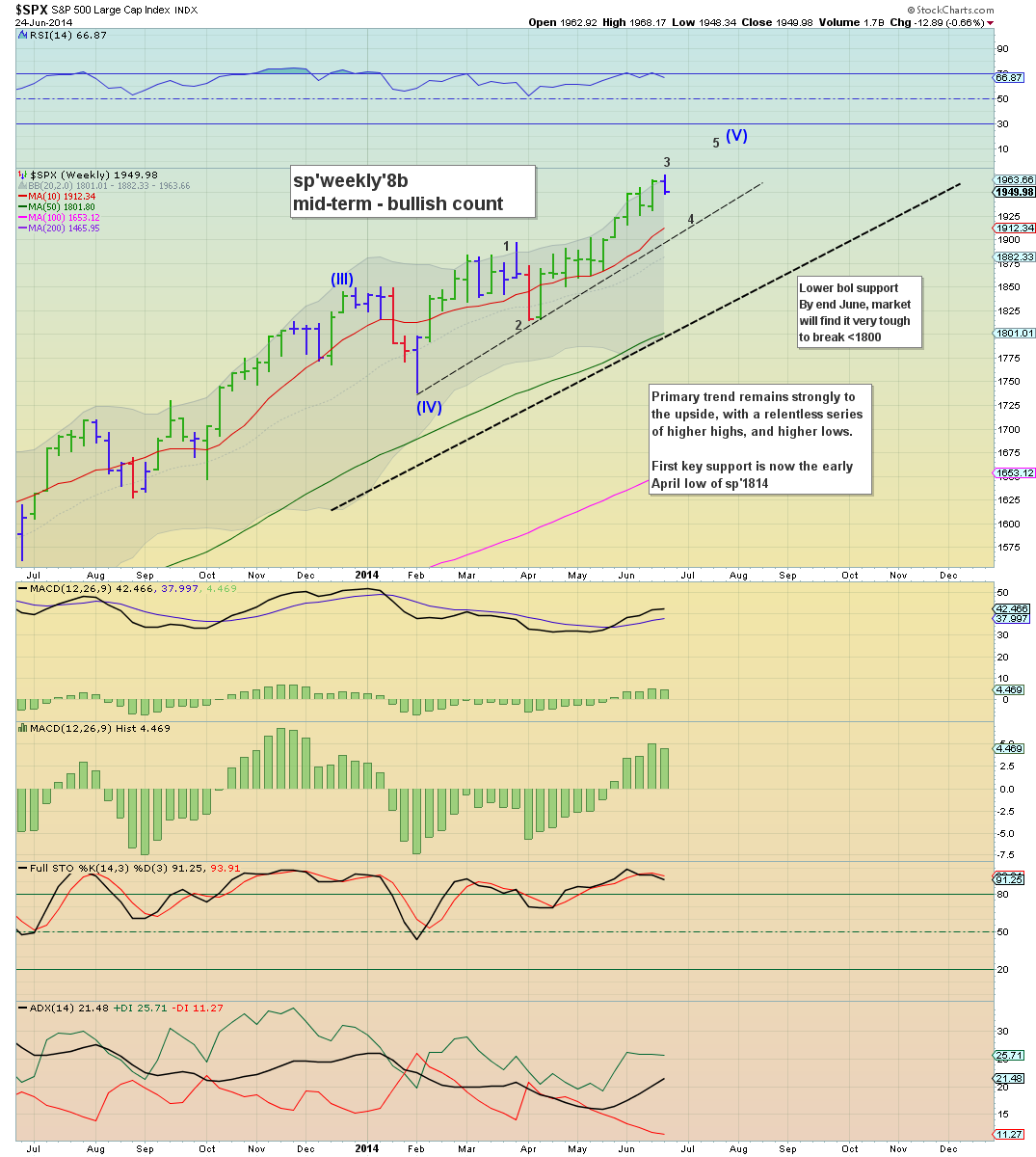 So, with the afternoon reversal, the 11th weekly green candle has turned blue. Certainly, it could easily turn back to green by the Friday close, but even if it stays blue... it doesn't mean the broader trend is due to change.

My wave count - the vain attempt that it is, is still suggestive of higher levels into mid July. From there, I would be seeking a multi-week down cycle. The big issue is whether that amounts to a decline of just 4-6%...or something more.

No doubt, there will be many touting today's reversal as a potential key top, but really..I just can't see it. A down wave/reversal was expected this week, and I've little doubt we'll rally into end month.. and probably at least the first half of July - as Q2 earnings start to appear.

The following video by Don Harrold is pretty provocative, and I wanted to highlight it here.

Without question, 99% of the mainstream will not be selling into rising prices. Only the 'insiders' tend to have the inclination to do that. The next major wave lower.. whether this year..next.. or whenever, will be just another occasion when the average retail investor will ask themselves 'why did I not at least cash some/all of my stocks out after such huge multi-year gains?'

Tomorrow has durable goods orders and Q1 GDP (final reading), market is expecting a downward revision to -1.5/-2.0%.. As ever though, market will be more concerned on what the Q2 number might be, but that is not due for another 5 trading weeks.


Crawling along the floor

I remain only holding a single long position, WFM, which today continued to churn out a floor. So long as it doesn't go any lower, the upside/recovery potential remains. 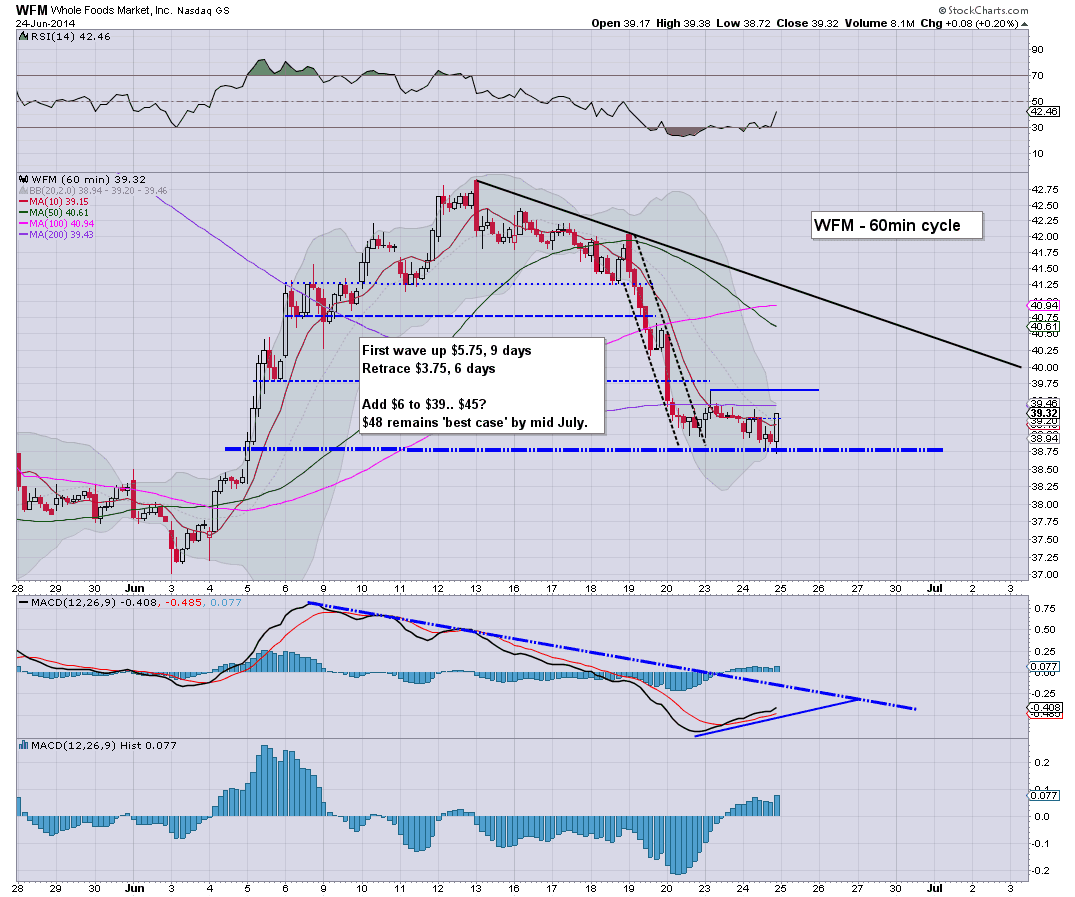 It would seem the stock jumped into the close on news of some legal settlement. As it is, I'm content to hold all the way into next Thursday - which is when the market will close early (1pm) for the July'4 holiday weekend. 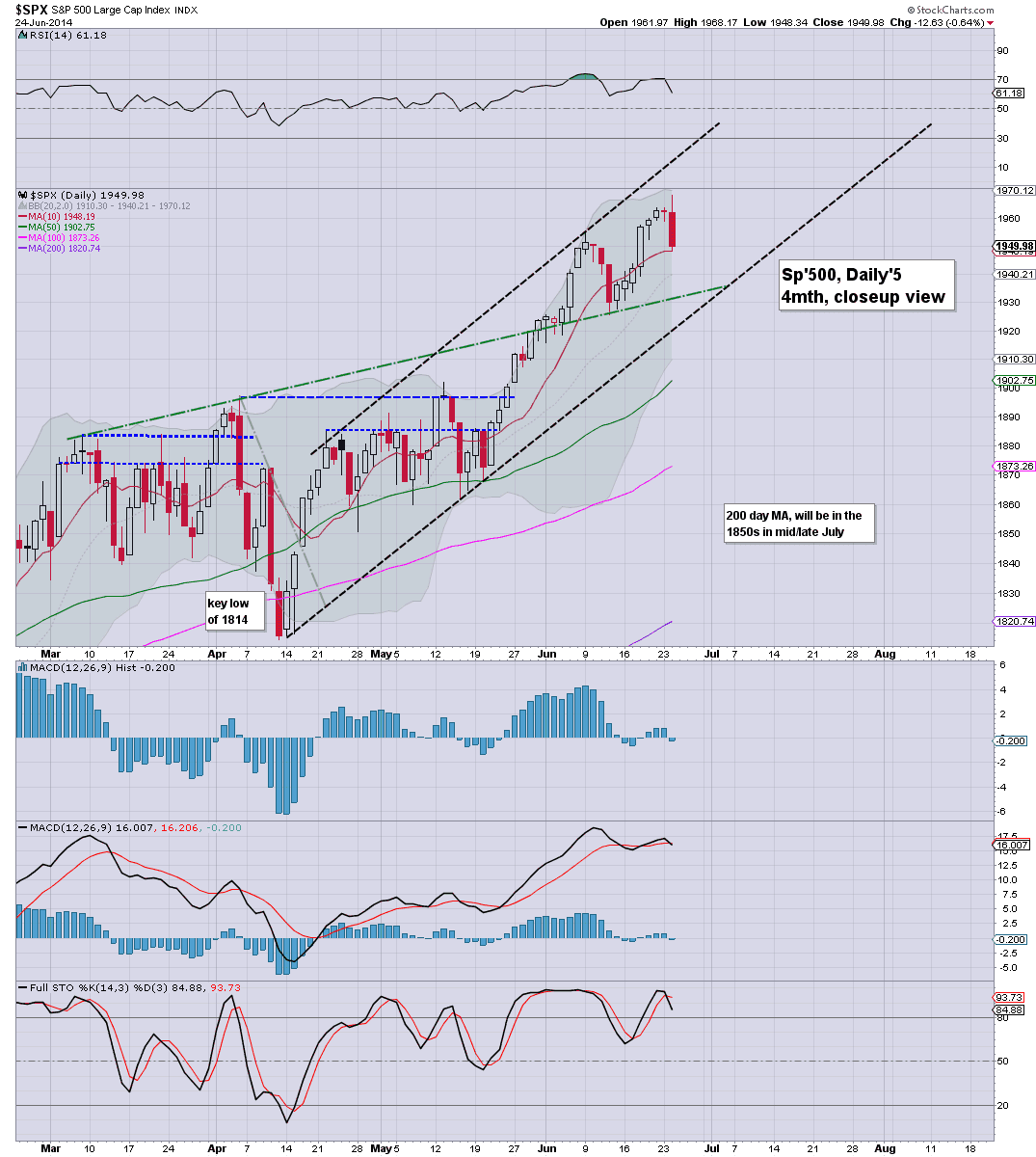 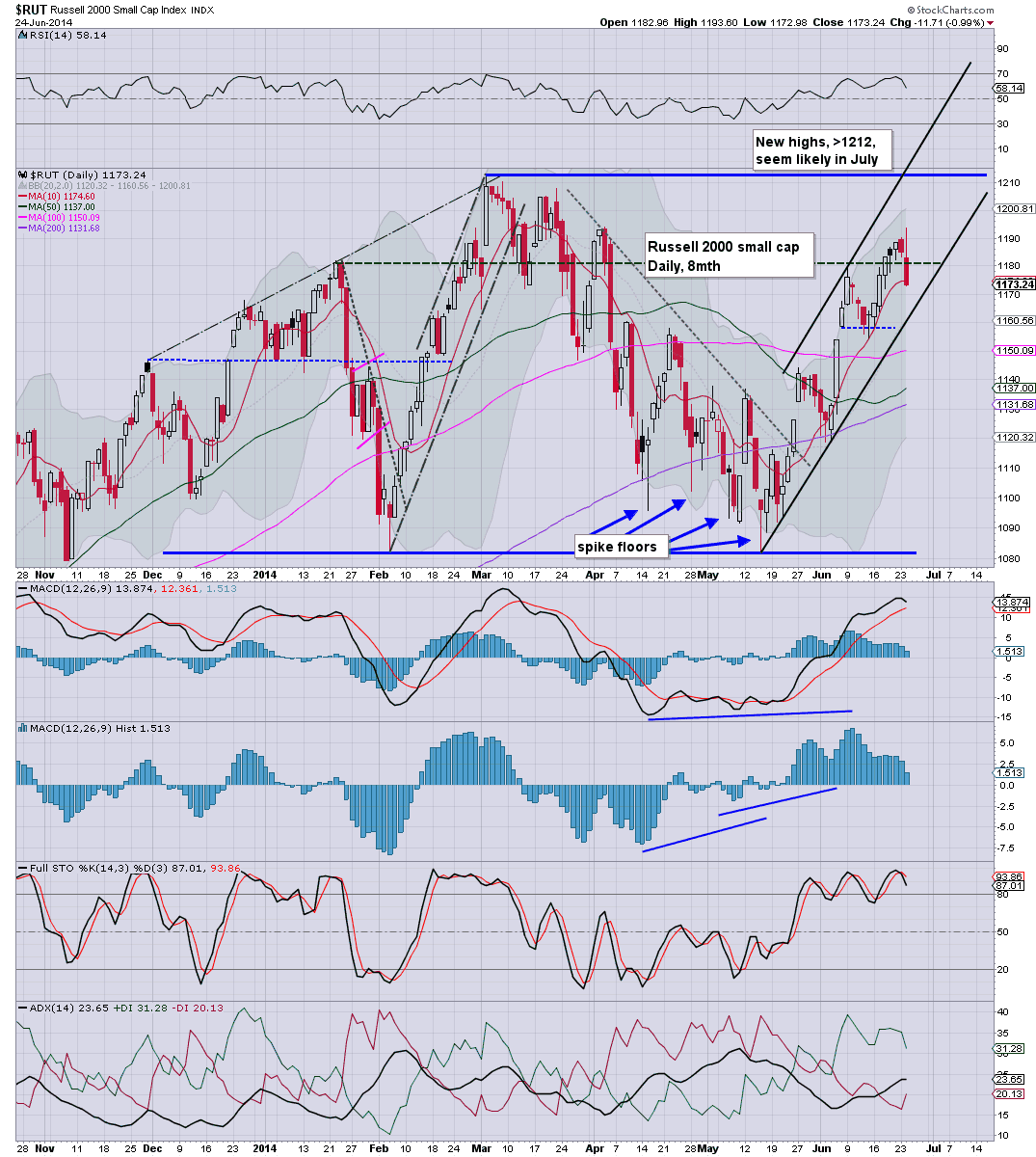 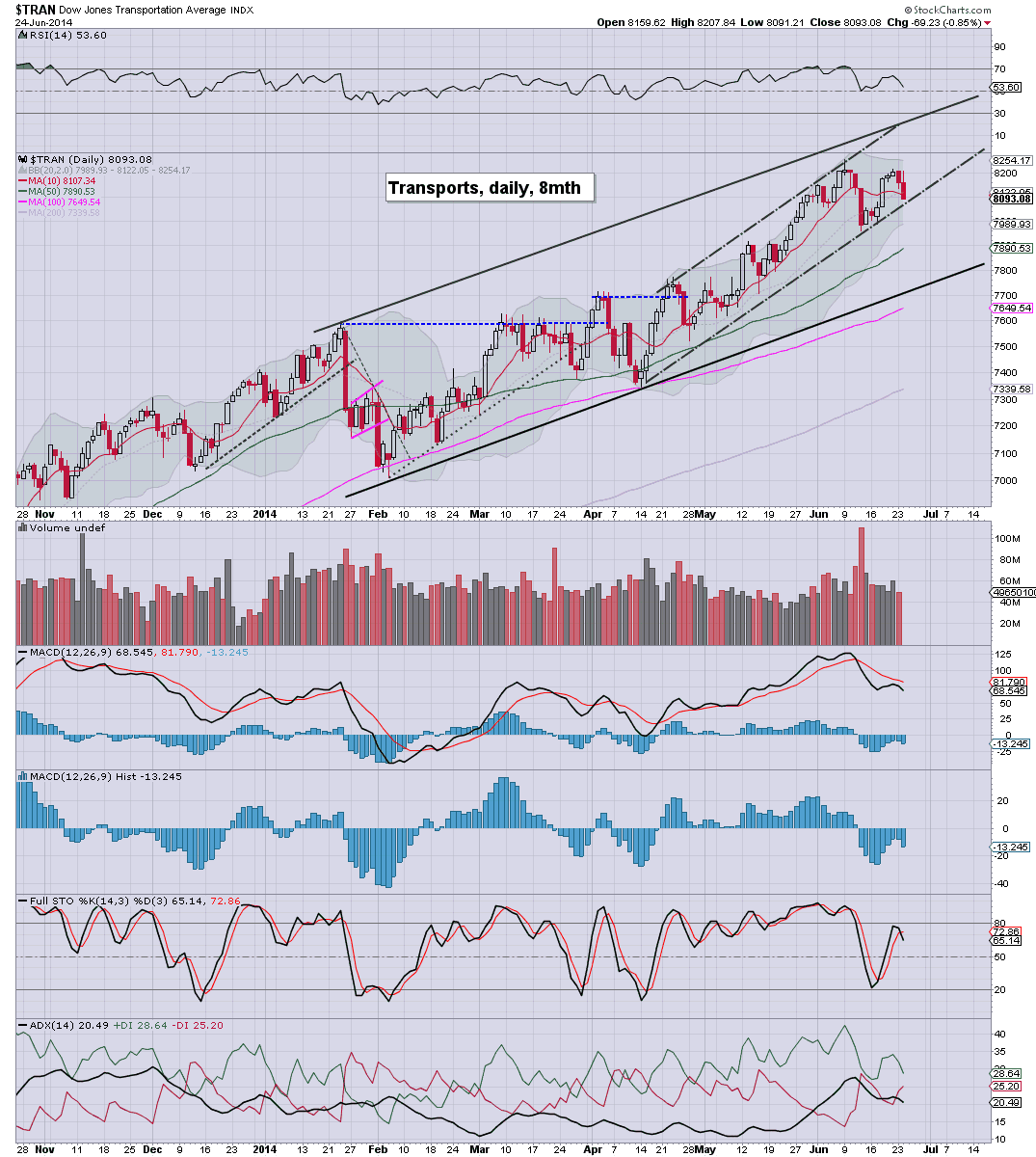 So..we have very clear bearish reversals on all the main indexes.

I can understand if some are going to get really bearish for the rest of this week, but I can't.

This kind of wave/reversal was expected...and we are VERY likely going to floor in the sp'1940/35 zone..whether tomorrow..or Thursday.
-