World equity markets are continuing to broadly climb. Most markets have been especially strong since summer 2012 - when even the Greek market finally stopped falling, now up 156% in just 18mths. Most markets look set for a further 10-20% upside into the late spring.


Lets take our first look of the year, at ten of the big world indexes 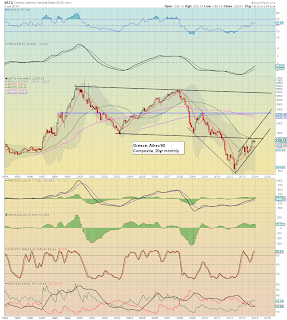 The Greek market looks strong, and is already +3.7% this year. A move to the 1300s looks imminent, and then the 1500s, although in theory, 2000 is viable by early summer. If there is going to be a summer/autumn major wave lower, downside will be back to at least where we currently are. I suppose a break of channel is possible, the natural level would be 1000. 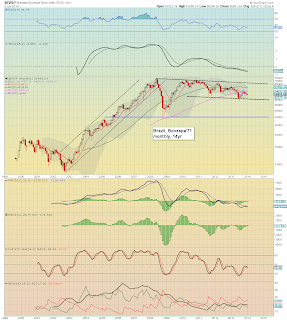 The Bovespa is certainly struggling, although current price formation could merely be a bull flag. Upside to 60000 is viable - that is almost 20%. Equity bears can only get excited with a break of lower support, which is around 45000 - around 10% lower. Underlying MACD (green bar histogram) looks prone to snapping higher within the next 1-3 months. It does bode more to the upside..than down. 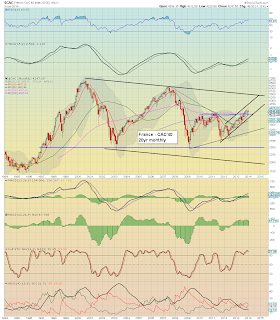 Each month the French leadership tout ever more crazier policies. The most well known recently was the online video tax. No doubt, Hollande will end up chasing and driving out all capital in the country. That is sure to end well! As many recognise..the French do like a revolution. 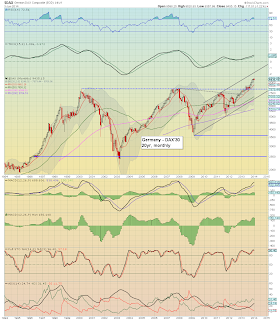 Germany remains the powerhouse of the EU, and the DAX is perhaps the strongest of the main world equity indexes. The big 10000 is an obvious target. By late spring, the upper bollinger on the monthly will be offering 9900/10100. That would make for a good intermediate top, before a pull back to the old double top of 8000.  Absolutely...100%....bullish. 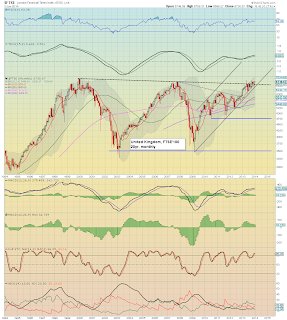 The UK economy remains a very twisted and bizarre one. It has been recently reported that house prices for the past year have risen around 8%. Great...another housing bubble, that will no doubt solve the underlying structural problems of unemployment and lack of manufacturing, yes?

The FTSE has had to battle real hard to hold these levels, but it looks set to break the Dec 1999 high of 6950. The 7000s look due this spring/summer, before a pull back. 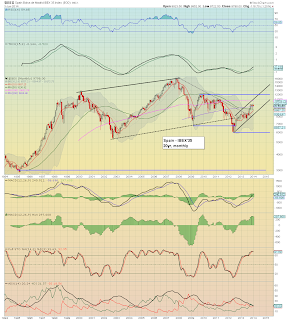 The biggest of the EU PIIGS, Spain remains a real mess, with building societal tension in a number of regions, not least of which is Catalonia. Sooner or later...they will make a stand, then things get interesting.

The IBEX looks set to break >10000 in the near term, and there is pretty obvious upside to around 12000. So..we have just over 20% of upside viable in the current multi-month ramp. A second half pull back..would naturally be from around 12k, down to 10k. 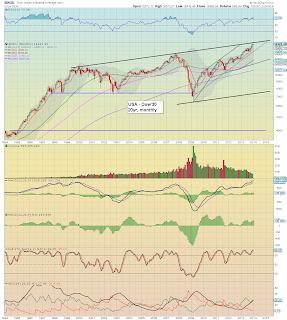 The mighty Dow has broken into the 16500s, and looks set for the 17000s by March/April. The only issue is where it gets stuck...it will be tough to break >17500, no matter how much QE the Fed are still throwing at the market this summer.

There is viable downside in the second half of the year to around 14500/14000. Certainly, anything <13k does not look viable. Many market commentators - at least those I follow, do seem resigned to the notion of the Dow 20k in the current multi-year 'rally of recovery'. I'm just wondering whether it goes hyper to 30k..or even 40k..before the Bernanke/Yellen paper bubble blows up. 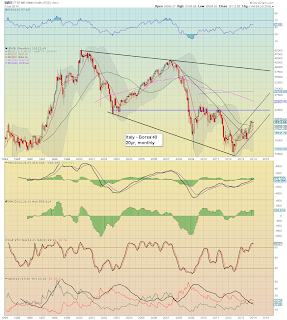 The second of the giant EU PIIGS, the Italian Borsa continues to battle upward. The monthly candles are offering some strong floor spikes, and suggestive of continued upside into the spring. First target is 20k, but I think that will be broken pretty comfortably, with swift follow through to around 22000/500.  Late summer downside would be to around 18k. 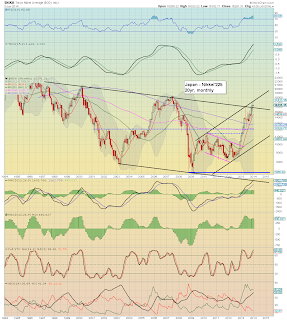 The year end close in the 16000s was a very important event for both the Japanese, but also the world indexes as a collective. The two DECADE down trend has been broken. There is easy upside to 17k, and possibly 18k by June/July. 20k does not seem viable in the current cycle, but certainly..in 2015.

The list of societal/economic problems in Japan is an extremely long one. As reported lately, the demographic issues alone are chronic, and then there is the Fukushima issue, but hey...if you live in Japan, it is borderline criminal to even refer to that place.

No doubt the money printing of 'Abenomics' will continue, but eventually...there will be a Yen currency crisis...and a bond market implosion. Who will the Japanese govt. blame for that? The country begins with a C.....and also happens to have an attraction to some rocks off its eastern coast. 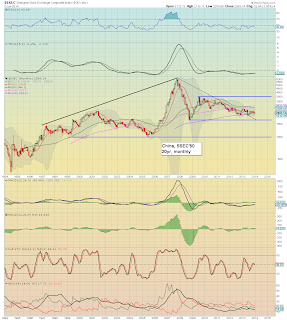 The China market remains the weakest of the main world indexes. The only thing that can be said about the Shanghai composite, is that it is at least holding the 2000s. There is upside to almost 2500, a few monthly closes >2500, and the obvious target will be 3500/4000, but not until mid/late 2015.

All things considered though, if you were a Chinese investor, that is a truly lousy market recovery from the 2008/09 collapse. Only the Greek market is weaker (still -78% from the 2007 high).

Taken as a whole, the broader world equity market trend remains to the upside. Certainly, there has been some weakness in the past few months, especially in Brazil and China. Yet, overall, the two world economic powers of USA and Germany are powerfully still rising.

With a few floor-spikes on the late 2013 monthly candles, there is reasonable opportunity for most indexes to rally another 10% into the late spring/early summer. A few of the more volatile/dynamic markets - like Spain/Italy, have clear potential to climb around 20%.

Without question..the broad trend is bullish, and there is currently zero sign of things levelling out.

Next week will see the market get back to normal, especially as almost every trader will have returned from their holidays.

Wednesday will see the FOMC minutes released, and it will be interesting to see any new detail on the taper-decision. No doubt, Mr Market will be looking for clues as to when the Fed will cut QE again. Right now, I'd guess for another cut in the March/May period.

The week will conclude with the monthly jobs data, and now that we've seen the first QE reduction, the reaction in the market to the jobs data should be less hysteria based than normal.

*there is sig QE-pomo, next Tuesday and Friday, both days of around $2-3bn
--


Holding to the original outlook

Since last summer, I've been resigned to a 'hyper-bullish' outlook, where the market rallies all the way into spring 2014..forming a giant wave'3 top..somewhere in the sp'1950/2050 zone. The point is this, there should (at least in theory) be a significant down wave (4, D, or however you want to label/count it), probably on the scale of 15-20% lower.

Minor chop to begin the year

The first two trading days of the year have begun with some minor weak chop. Equity bears were teased over and over again across 2013 with many tiny little pull backs of 1-2%, only to see the market push back upward. The next few months look to be little different. 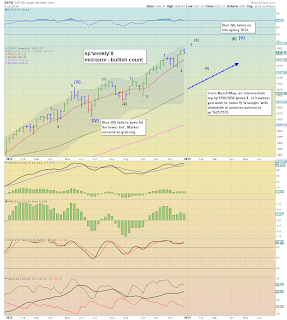 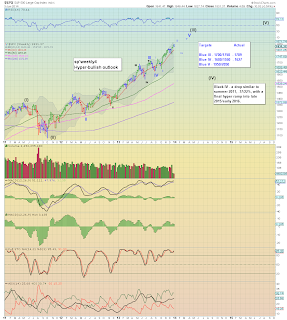 An interesting start to the year...

I'm holding to the original outlook from last summer. A sub'4 down in late Jan/early Feb..before a final lurch higher into March/May.

Goodnight from London
-
*The weekend post will be on the World Monthly indexes
Posted by Trading Sunset at 04:00:00
Email ThisBlogThis!Share to TwitterShare to FacebookShare to Pinterest

The main indexes closed with some mixed chop, sp -0.6pts @ 1831. The two leaders - Trans/R2K, both settled higher by around 0.5%. There is slight risk of further downside next Mon/Tuesday, but with broader upside into mid/late January, into the sp'1860/80 zone. 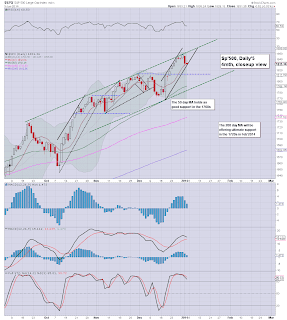 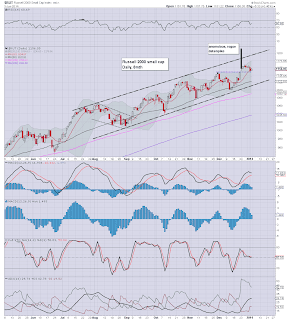 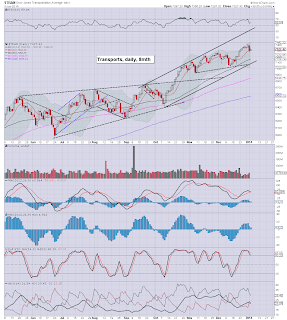 A pretty choppy end to the week, but then..with many traders still on holiday, it remains a rather quiet market.

There is minor risk of downside to maybe 1820/18 next Mon/Tuesday, but really, the general trend remains to the upside.

Next week things really get back to normal, where we have the FOMC minutes (Wed'), and the monthly jobs data (Fri').
--