Volatility primed for another spike higher

Whilst the main indexes clawed a little higher, the VIX naturally slipped, but just a little, settling -1.7% @ 16.49. Hourly cycle is arguably already reset, with the daily/weekly charts offering upside to the 19/21 zone. 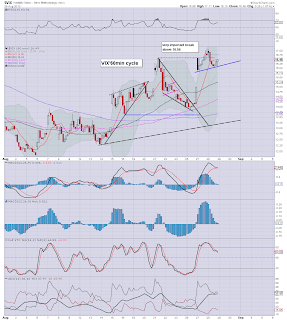 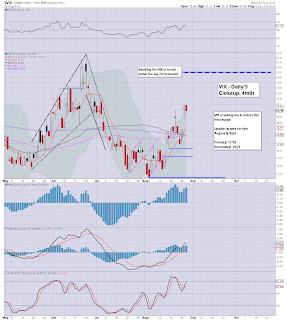 For the equity bears out there, the decline in the VIX should be considered in context, not least after yesterdays gains. Today was very likely a simple consolidation day before the next jump.


Awaiting the next jump

Whether the jump takes place tomorrow, Friday..or next week, it does seem VERY probable that the VIX is now primed to make its first attempt on the 20s since mid June.

*I remain LONG VIX, holding overnight, and seeking an exit in the low 20s..by the Friday close.
- 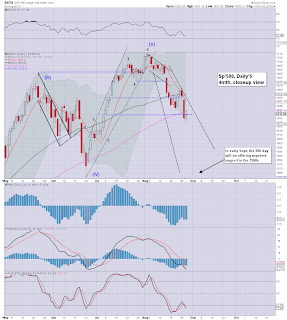 *I'm still inclined to avoid posting any smaller cycle charts, for fear of 'getting lost in the noise'.
--

A very quiet day, I'm calling it a simple consolidation day for the bears, before the next big wave lower.

With primary target of 1570/60s..that makes for a fair way lower to go, and unless you think we're going to breaking back into the sp'1700s real soon, then I find it hard to understand how anyone can be not be bearish into next week.

*I remain LONG VIX, seeking an exit before the Friday close in the low 20s.
--

The main indexes are holding slight gains, but the bulls certainly can't tout today as anything other than a minor bounce. Bears should merely seek any close <1635, whilst bulls really ought to be desperate for the 1640s. Bigger picture remains broadly bearish into next week. 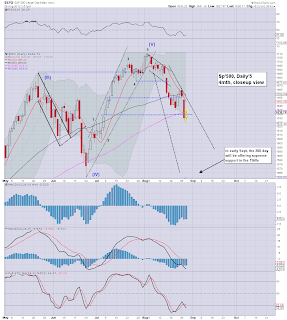 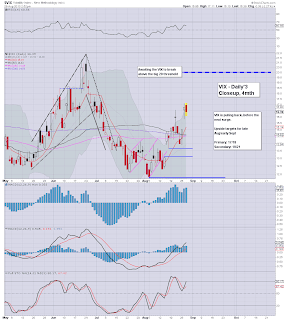 *VIX remains lower, but only 2%, which is very good if this is mere 'consolidation' before the next jump higher.
--

All those touting new highs 'soon' have a real challenge in the days ahead. It won't take much to rattle them, a daily close <1615 would be enough, and that opens up the primary downside target of sp'1570/60s.


*I remain LONG VIX, will hold overnight, seeking an exit in the low 20s.


3.32pm..We remain stuck at the 1640 boundary. Who wants to buy above that level, and hold overnight?

Ignore the noise..and go stare at a weekly chart...that is where the clarity is.

The hysteria stocks - NFLX, FB, etc, are naturally doing better than the main market.
Posted by Trading Sunset at 19:54:00
Email ThisBlogThis!Share to TwitterShare to FacebookShare to Pinterest

The main indexes are holding moderate gains of around 0.6%, with the sp' seemingly stuck around 1640. The Transports is flat, after an earlier touch of what is an old channel/trend, whilst primary downside target remains around 6000. 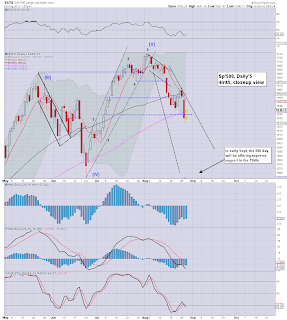 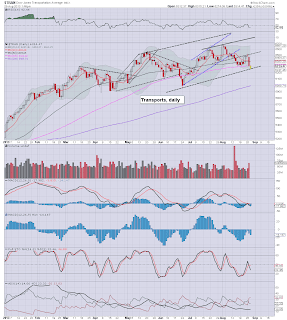 Not much to say, its turned out to be very much a holding pattern day.

Despite the current gains, I'm still looking for a rollover, if not today..then tomorrow.

Next soft target is the psy' level of sp'1600, considering 'everything'..that still seems viable by the Friday close.

*for the bears..there is NO QE-pomo for the remainder of the weak to be concerned about.
Posted by Trading Sunset at 18:53:00
Email ThisBlogThis!Share to TwitterShare to FacebookShare to Pinterest

The main indexes are continuing to build gains, with the sp' on the border of the 1640s. Bears should be seeking some weakness in late afternoon, with preferably a close <1635. Bulls really have no justification to get confident until >1650. 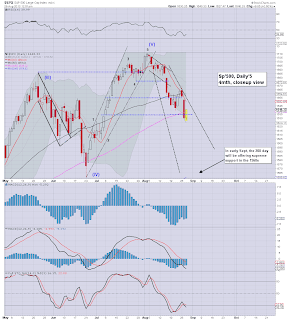 Well, the more I read, the more bemused I am at the bullishness out there.

According to consensus, yesterday was the capitulation of the wave from 1709, and now its up up up.
--

It would seem Mr Market has completely forgotten that the planes are being readied in their hangers, and the missiles are being prepped.


Posted by Trading Sunset at 17:52:00
Email ThisBlogThis!Share to TwitterShare to FacebookShare to Pinterest

The main indexes are holding moderate gains, with the sp in the mid 1630s. Many out there are now touting some kind of 'significant bounce'..which is odd, considering we had a sig' bounce complete just two days ago. Oil is holding gains of 1.3% 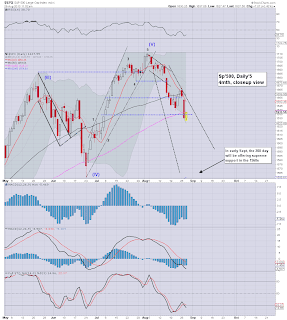 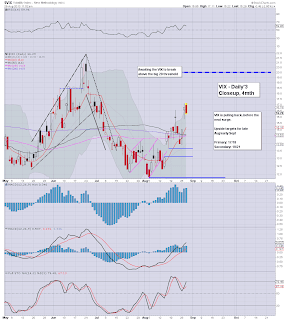 Suffice to say, I'm somewhat bemused at the chatter out there, the notion of some sort of multi-day bounce, even though we just had one complete on Monday.

Anyone confused...go stare at the following weekly chart for 20 minutes. 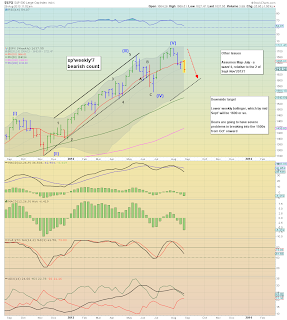 --
We ain't trending up, at least in the immediate term.
-

time for lunch
Posted by Trading Sunset at 16:54:00
Email ThisBlogThis!Share to TwitterShare to FacebookShare to Pinterest

The main indexes are moderately higher, but there is no real power on the upside, and a close in the 1640s looks difficult. Metals and Oil are both higher, as we are another day closer to more 'humanitarian' intervention in a sovereign state. Bullish...yes? 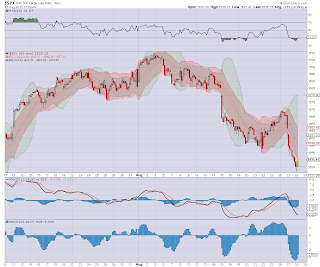 I'm kinda at a loss as to what to highlight this morning.

Market is relatively quiet..and we are probably in a simple holding pattern before the next wave lower.
--

I realise plenty of people out there are touting '5 waves complete', but then..just what the hell are they expecting across the next few weeks?

A ramp to new historic highs?
--

VIX is a touch lower, but I'm not overly concerned. The low 20s look a very valid target, on the bigger daily/weekly charts.

It is Thursday yet? I'm already tired of today.
Posted by Trading Sunset at 15:55:00
Email ThisBlogThis!Share to TwitterShare to FacebookShare to Pinterest

10am update - tired of the noise

The market opens with some mild chop. Certainly, neither the bulls or bears can tout anything significant. Regardless of any intra-day bounce, primary trend remains to the downside. Metals and Oil are both higher on the building war-talk. 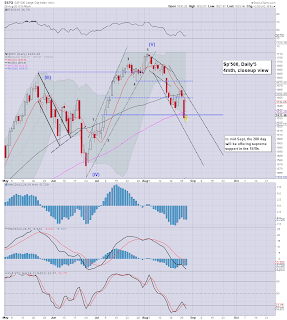 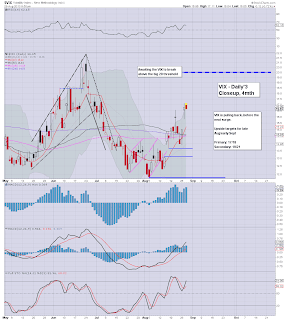 I'm tired of getting lost in the 'minor' noise. I think I might skip posting any smaller cycle charts for at least a bit.

*I remain long VIX, seeking an exit on the next big jump..which clearly won't be this morning..if not until Thur/Friday.

Good morning. Futures are largely flat, sp +2pts, we're set to open around 1632. Precious metals are higher, Gold +$15, with Oil up another 1.4%..WTIC is now in the 110/111s. Regardless of any morning bounce, the bulls are going to struggle into the long weekend. 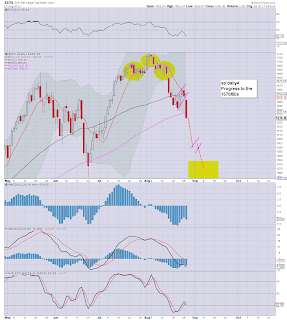 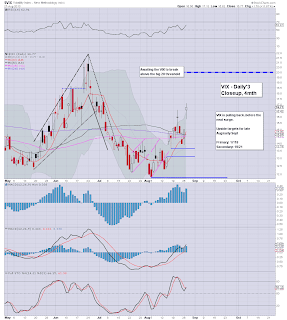 That is just a best guess, as based on the bigger weekly charts. I realise some are calling a fifth wave low, but considering the current trend..and the looming Syria issue, I find it hard to believe we won't broadly just fall all the way into the weekend.

*not much data today...with $3bn of QE. Interestingly, after this morning, there is no significant QE for rest of the week.
--


Q Do you think traders will be wanting to go long across the long weekend? I don't think so either.

Long day ahead....
Posted by Trading Sunset at 13:31:00
Email ThisBlogThis!Share to TwitterShare to FacebookShare to Pinterest

The market looks set for further declines in the coming days, not least pressured by the looming western-powers attack on Syria. Primary downside target remains the lower weekly bollinger, currently at sp'1563, and that should equate to VIX in the low 20s. 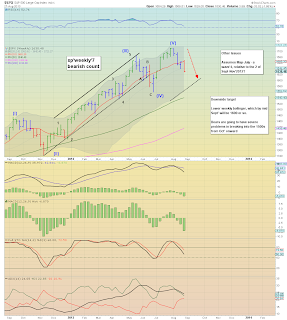 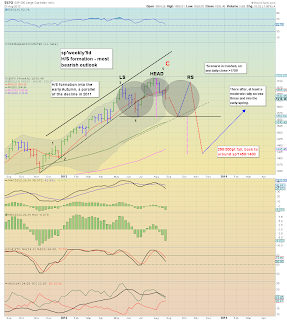 Today, I can note that the fourth candle has now turned a decisive bearish red, and the bigger downside target now looks viable in the coming week or two, perhaps even days.

Unquestionably, this market is very weak, and the momentum is firmly on the side of the bears. A return to the June lows look very viable, and that should be plenty enough to get the VIX into the lows 20s.

For now, it remains a mere 'hope'...a 'dream'. I need to see a clear hit of the lower weekly bollinger before this scenario can be seriously considered. Yet so far..it does look good into next week...and if the target is hit, bears should be seeking a strong bounce, before putting in a critical lower high, somewhere around 1675.

Wednesday has some housing data at 10am..along with the usual EIA Oil report.

*there is sig' QE-pomo of $3bn, although as today showed, if the bears are strong enough..they can actually overcome the Benny bux fuel.
--

So..after a largely frustrating few days, I decided to get involved, and chase the market lower. I am LONG VIX, from the high 16s, and seeking an exit in the 20/21s..before the 3 day weekend.

*it was good to hear from some of you today, all comments...welcome.

--
Posted by Trading Sunset at 04:00:00
Email ThisBlogThis!Share to TwitterShare to FacebookShare to Pinterest

The US market saw significant declines, with the sp -26pts @ 1630. The two leaders - Trans/R2K, saw rather severe falls of 2.6% and 2.4% respectively. Near term trend looks very weak, with a bigger downside target of sp'1570/60s viable within the coming days...along with VIX in the low 20s. 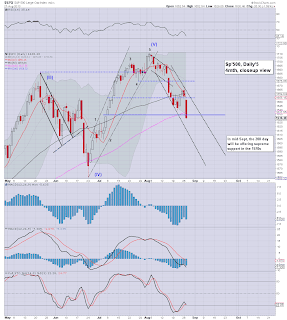 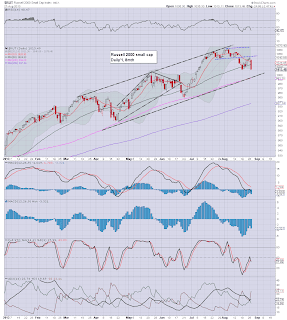 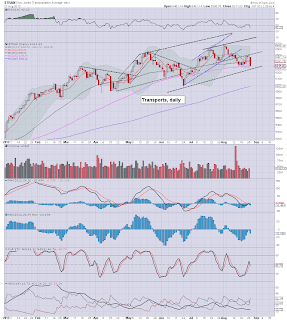 The market opened around sp' 17pts lower, and despite some hours of trying, the bulls simply weren't able to form a solid floor.

The closing hour showed no hint of any broader turn to the upside. Despite some 'risk' of a bounce  - the hourly index/VIX cycles are clearly pushing the limit, the market still looks very weak in the days ahead.

I have to note, I think the Syria situation is being grossly under-estimated by Mr Market. There is the real threat of military action over the coming three day holiday-weekend, and I find it hard to imagine the market rallying on 'missiles are flying'.


Some interesting comments from a guy in the casino pit...