Whilst this nonsense continues, it seems best to focus on the bigger picture. Moves of less than 1% are merely noise, not least when the last 3 weeks has been a super tight trading range.

IWM remains stuck in a 3 week distribution formation. Pretty clear, a break over 84 ...chase it higher..and break under 81...chase it lower. 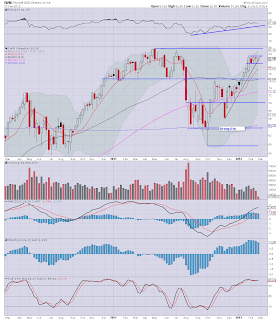 VIX is still suggesting 2-3 weeks until the first opportunity for an explosion upwards – somewhere in the upper 20/low 30s. 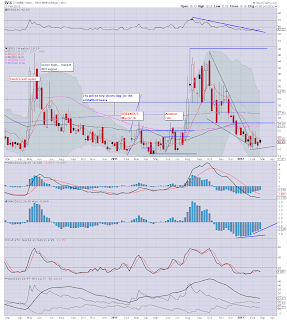 The master index arguably broke out of the baby wedge purely due to being squeezed out for time reasons. 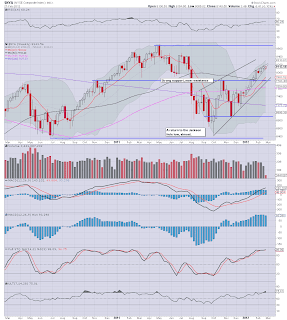 Some more dynamic movement..is due.

We have lots of econ-data to come this week, not least of which might be a Q4 GDP number likely to be revised somewhat lower.

Near term (within 3-7 trading days) targets:

I am noticing more moodiness out there across the various boards. The doomers are getting increasingly desperate for a major move lower (hell, many of them were shorting at sp'1250 in November) -which increasingly looks unlikely. Meanwhile the cheerleaders are on an ever more confident tirade, touting new market highs sometime this year.

Clearly, the very limited trading range we are now stuck in, is starting to really frustrate a lot of the posters out there.

Regardless of the crazy posters, March is this coming Thursday. Spring is coming......its time for some of those 'Green Shoots' again.

Posted by Trading Sunset at 23:41:00
Email ThisBlogThis!Share to TwitterShare to FacebookShare to Pinterest 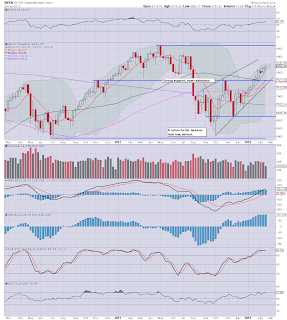 Hmm, that is indeed one hell of a wedge.

Contrary to what many of the deluded might believe, the markets are still not even above last summers high. I dismiss the stupid dow'30. That index remains laughable, and should be the dow'100 for anyone to take it seriously. Same for the Transports which only have 20 components (surely they can find at least 50 companies that are in the transport sector?).

These are not even bold targets. They should be easily attainable in a standard retrace. That is not to say of course that we won't get a really annoying higher high. However, as noted in previous posts, the smarter ones -with the big money to short, will be waiting for a lower high to occur on any subsequent bounce.
-

Market moves remain noise until we see a dow -175 day, and close at that, or better.
Posted by Trading Sunset at 00:43:00
Email ThisBlogThis!Share to TwitterShare to FacebookShare to Pinterest
Newer Posts Older Posts Home
Subscribe to: Posts (Atom)