I think I hit overload yesterday evening, there is probably a point at which we simply read too much of others opinion/analysis. I would think everyone at least considers what others are saying about this crazy market, I certainly get swayed all over the place, and I believe that's a good thing. Despite the name 'Permabear', I do try to keep an open mind, and hey...I even went briefly long this week, successfully.

It is the weekend, so lets take a look at those weekly cycles for six of the main indexes. 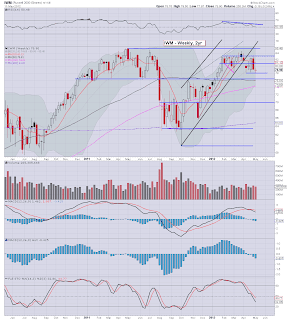 All indicators are now bearish, and there is room in the cycle for a number of consecutive months to the down side. Key resistance on IWM is 80/81 - with the 10MA adding extra pressure. First target to the down side is 76/75 a break into the 74s would probably mean a move to the big 70 level. That is over 10% lower - which would equate to sp'1270. 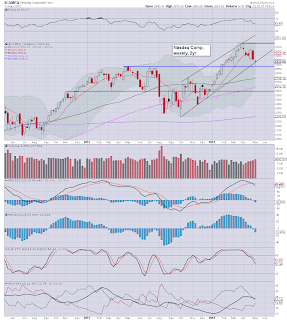 The Tech' finally pierced through the October support/trend this week. All indicators are now bearish, and first target for the NASDAQ is 2875, then 2600 - a fall of 10%. The one concern I have for the bears is the looming Facebook IPO. Just how much kick will that provide to the tech' and wider market? Will it be a one day wonder, or can that over hyped and overpriced nonsense help to re-restart the primary uptrend? 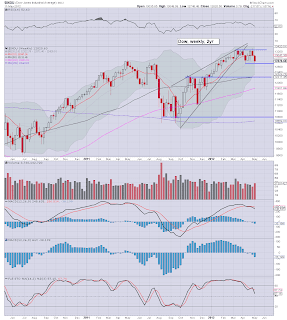 The Dow is looking weak, the 10MA around the big 13k is rolling over and will likely act as a major wall to any bounce early next week. Downside target remains 12400/200. There are a number of chartists looking for somewhat lower, in the 11700/500 range. Keep in mind that the lower channel on the monthly cycle would suggest 11000 as the likely low for this years down cycle. 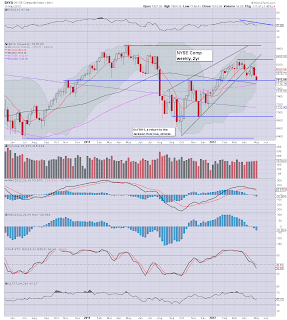 The 'master index' remains weak, and a 10% fall would take this to around the big 7k level. All indicators are bearish, there is certainly no sign of any levelling out here. 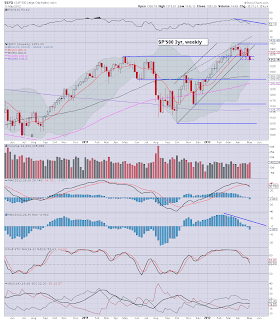 Having broken the recent 1357 low, the Sp' is now setting up for a significant move lower to 1270 - where there is strong support - just a touch under the 200 day MA. All indicators are bearish, there is plenty of downside potential here. Only a move above 1395 would make me marginally bullish, and I would only be confidently bullish if we broke the recent high of 1422. 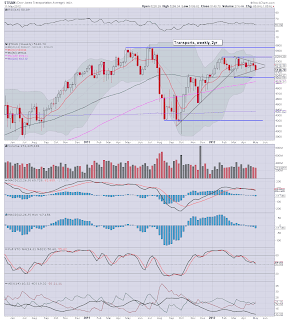 The transports remains my favourite index to watch, and the direction in which it breaks will be a key indicator of where the broader market will go. The hugely important 5000 level is yet to be breached, but if it is, then a move to 4600/4400 seems very likely - a good 10% lower.

All indexes are moderately bearish, but we are yet to see the first real dynamic snap lower. Roughly speaking, only with a move under the equivalent of sp'1300 can we say for sure that we're now in a new trend. The frustrating thing for the bears would be if 10% is all they get this summer.

Are we going to 1270, only to then cycle higher? However, the monthly cycle (see below) comes to mind, and that still suggest a 'natural' move to the lower channel of 1100. 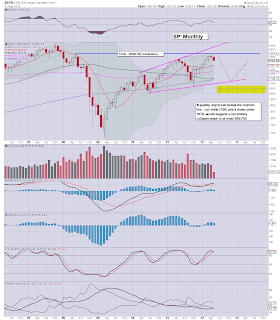 Considering the bigger macro-economic picture, I remain very much inclined to hold to the simple outlook that we'll cycle lower across the next 2-5 months to the sp'1100 level, where the Bernanke will appear to announce another desperate round of QE. Many have noted though, it would take some months for any new QE round to get underway.

Whether Benny will dare do a major QE ahead of the US elections is of course a real unknown. I'm guessing he will, especially if there are continued declines across most asset classes.Things sure would be a lot simpler to forecast were there no constant threat of random paper printing events.
Posted by Trading Sunset at 17:30:00
Email ThisBlogThis!Share to TwitterShare to FacebookShare to Pinterest

CRB - Commodities about to break support

Commodities are leading equities lower, and remain a strong and clear warning that the down trend in the broader markets will continue into the early summer. 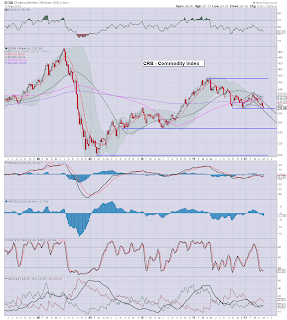 The 290 level on the CRB index is surely going to fail sometime next week, and that will likely lead to 250 - a good 15% lower. This would be highly suggestive of sp'1270 within the next few weeks.

In the bigger picture, it will be important to see if the 250 level can hold across this year. A break of 250 would likely mean we're going to 200 - a full re-test of the 2008/9 collapse wave lows. Of course, that does not imply equities will be at sp'666, but it will be an important index to regularly keep in mind.