The main indexes closed moderately higher for a third week, although the Nasdaq declined by 1% - no doubt largely caused by the decline in AAPL. The current bounce remains similar in style to the one from June/July 2011. Most traders will remember what came next. 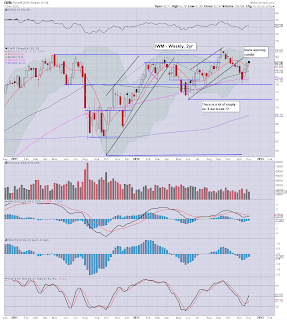 I made a point yesterday in the daily cycle update about IWM, in that it has been flat lining for 7 trading days, and Fridays candle was a black warning candle. The weekly candle is also a black warning candle, and is suggestive of underlying weakness. Such warnings don't always work, and indeed the weekly IWM chart shows many black candles that have failed.

What is clear, a break under the weekly 10MA of 81.20 would be the first sign of trouble, and any break under 80 should open up a fast move to retest the recent 76 low. If we do see 79s, I do not expect 76 to hold, and would immediately be seeking to test the June 72 low...within 'weeks'. 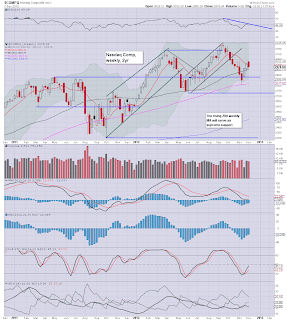 Once again, it is highly amusing to see the once powerful tech sector show significant weakness. The Nasdaq Composite declined by just over 1% this week, and this was primarily due to the decline in AAPL.

I have to wonder if the tech' is not the index that is now leading the way? If so, the natural target would be the June low in the 2720s area. Ultimate 'crashy' support is in the low 2500s, around 15% lower. This would equate to the low sp'1200s. 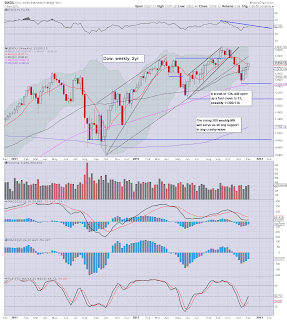 The mighty Dow'30 closed the week comfortably higher, and there is NO sign of levelling out yet. The next resistance zone is around 13250/300. Anything >13400, and I'd be seriously bemused at the strength of the rally.

Long term support is around 11300. If there is any major collapse wave in the coming weeks, the doomer bears would be wise to lighten up positions around 11500/400. The snap back from such a low would likely be fierce, in the style of the Oct'2011 low. 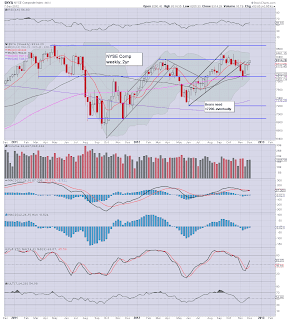 The master index is a mere 2.5% from the early September highs. In fact, the NYSE Comp' is the most bullish index out there. If we see new highs in the next month or two, it would bode badly for the bears.

There is nothing bearish about this chart, and indeed, next week the NYSE is set to go positive on the MACD (blue bar histogram) cycle. 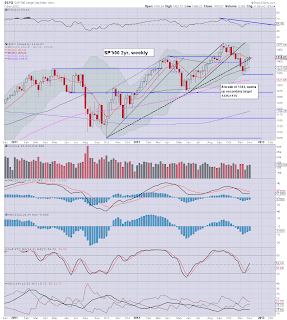 The rally is looking a little tired, and we're right back to the soft resistance zone of 1420/35. It will be very difficult for the sp' to put in any daily closes in the 1440s.

Clearly, any break over the QE September spike high of 1474 would be a disastrous outcome for those traders seeking the first primary wave lower into 2013. 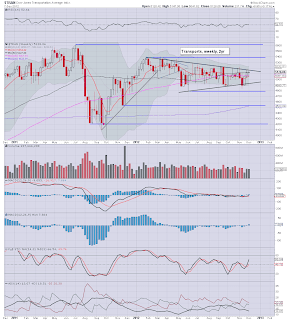 The transports - as  'old leader' remains in its own little world, in an ever tighter trading range. It will break out eventually...and when it does, it will be the greatest buy or sell signal, the market will have been given since the spike low in October 2011.

Seriously, keep your eyes on the transports weekly/monthly charts. A break >5500..bullish, a break <4800.bearish. It really is that simple.

Certainly, it was not the most exciting in market land. As the weekly charts display, the near term trend continues to be upward, although we are surely in real danger of a pull back of some degree. The sp'1380/70s still seem easily in reach in the coming week.

Doubtless, with each passing day, the fiscal cliff comes closer, and baring a surprise agreement, Mr Market is going to need to swiftly adjust to the reality that will be Q1 2013.

With the weekly close of sp'1418, bears are faced with a real concern. If we break 1423 next week, it'll open up the 1430s..and perhaps even a test of the Sept' highs. The NYSE comp' chart is certainly already close to taking out those highs, and the Dow is close behind.

I think there are three broad near term outlooks: 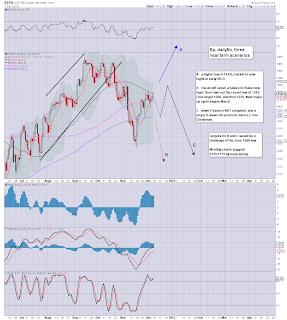 As things are, I am still highly dismissive of scenario A. I find it very implausible to see new highs, not least since I can't see ALL fiscal cliff measures being successfully delayed - in which case Mr Market will have to greatly re-price itself to at least a somewhat lower Q1 2013 GDP.

Considering the recent price action, - and the seasonal 'Santa' factor, I'm inclined to support C, rather than a straight down B. We'll know its B, if the key 1343 low is taken out.


A reminder on my original outlook from October... 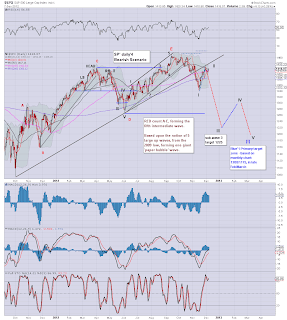 So far,..it remains on track, with targets of 1345 and 1400/25 hit, and next up...1225. The latter low 1200s target is a bold target to be sure. As noted earlier, a slight delay of the next down wave seems very possible, but I'd most definitely still be seeking the target achieved no later than end January.

Next week will largely be about the last FOMC of the year, where an announcement is due 12.30pm on Wednesday. However, it was already announced at the September FOMC that the Federal Reserve intend to do naked/unsterilised T-bond buying - since operation 'twist' will end, due to the Fed having no more short-term bonds to offset long term bond purchases.

Naturally, the media, many online posters, and even 'professioanl financial analysts' are touting next week as 'the week the Fed are due to launch QE4, with 45bn of bond buying'...even though this measure was announced at the September FOMC.

Have a good weekend. I will return on Monday :)
Posted by Trading Sunset at 17:28:00
Email ThisBlogThis!Share to TwitterShare to FacebookShare to Pinterest

Another twisted and bizarre week in the US capital markets. To close the week, lets take a look at WTIC Oil, which remains very weak, and looks set for significant declines next week. First target remains $80, and then the June low of $77. If 77s fail to hold, then the primary doomer target of $60 - in early summer 2013, will be right on schedule. 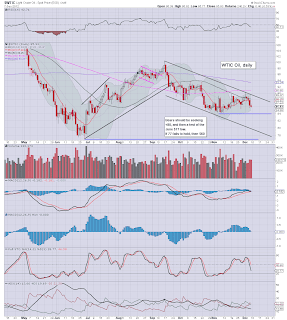 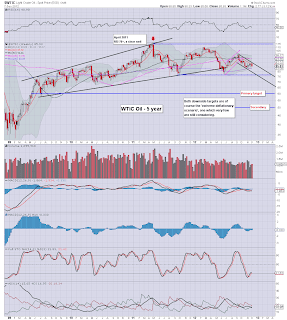 With the dollar putting in its third consecutive daily gain, it is not surprising to see WTIC Oil decline, losing around 3% this week.

All things considered, the underlying weakness in the global economy - especially the EU, should see continued weakness in Oil prices.

What was especially surprising in recent weeks, was that despite yet another flare up in the middle east, Oil barely moved, and remained well under the big $100 level.

With the dollar higher for the third consecutive day, I thought I'd also post these up, not least since its important in relation to WTIC Oil. 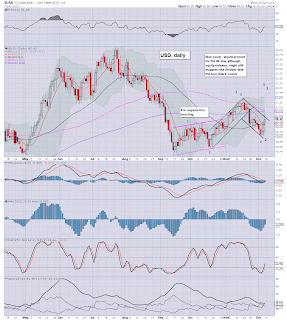 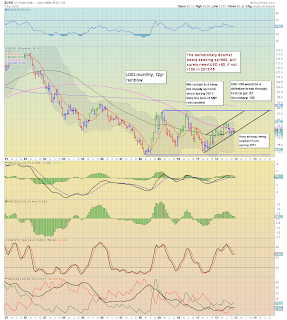 A daily close in the 81s would be very significant next week, and immediately open up a quick move to 81.75/82.00. That would put serious downside pressure on the equity and commodity markets. With next Wednesday being an FOMC day, things are going to get a lot more dynamic in the US markets.

*next posting, late Saturday, which will probably be on the weekly index cycles.
Posted by Trading Sunset at 04:00:00
Email ThisBlogThis!Share to TwitterShare to FacebookShare to Pinterest

The main indexes closed a little higher, although the tech' sector remains especially weak, no doubt due to AAPL. The SP' closed 4pts higher, and is just 5pts shy of the 1423 spike high seen Monday morning. The lower VIX confirmed the complete lack of fear in what remains a bizarre...and twisted equity market. 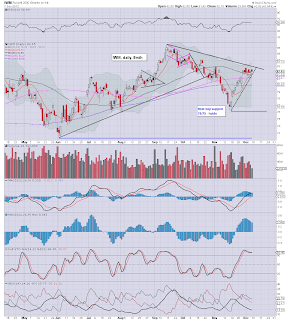 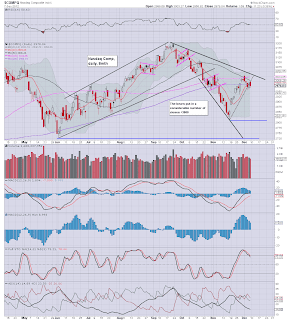 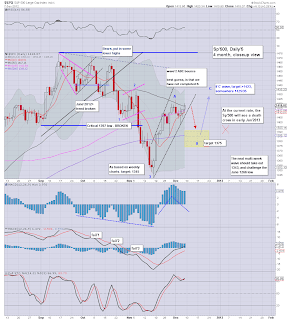 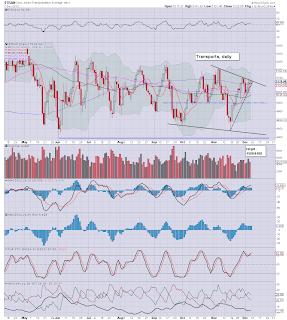 Of the daily index charts I regularly track, the IWM chart is the most bearish I can see. We have a 7 candle flat top..with a doomer black candle, warning of a failed rally.

Generally speaking, the transports and IWM (rus'2000) are the most volatile indexes, and over the years, I've often seem them lead the way.. sometimes by mere minutes, other times, by days..even weeks ahead of the bigger indexes.

So..keep an eye on IWM next Monday, see if it can break back under 81, which would be a real sign of index weakness.

As for the SP', my best guess remains we are still due a further pullback, to around 1385/75, within a few trading days..just before FOMC on Wednesday afternoon ? However, such a bearish outlook would have to get thrown out if we break sp'1423 at any time, and we're a mere 5pts from that.

If you take a look at the MACD (blue bar histogram) its still generally ticking lower on all the indexes, but it remains in very strongly bullish territory. Even if the market declined for ALL of next week, the momentum would still be moderately positive.

Best guess would be we see 3-4 daily ticks to the downside, and then a secondary lower tower on the MACD cycle..by around Christmas eve.

It will be at that point, when I will look to be re-shorting into year end, and across all of January.

So, to be clear, I am short into the weekend, seeking a few days lower, but then a further wave higher into the Christmas trading week.