The US market declined slightly this week, but most indexes were only -0.5%. Perhaps most notable, those indexes that lead the way up - Transports and the Rus'2000, saw the biggest declines of 1.5 and 0.6% respectively. A multi-week down cycle looks imminent. 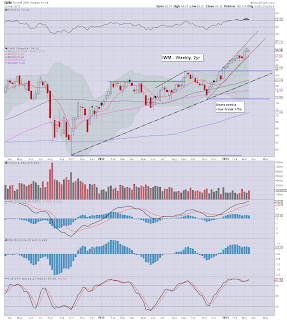 The R2K has been the second leading index since this large wave started in mid November. Underlying MACD (blue bar histogram) is putting in a very nice secondary lower tower, and I'm guessing this is indeed the very first sign of a new multi-week wave lower. Bears need a break <92..which will open up the first target of 86. 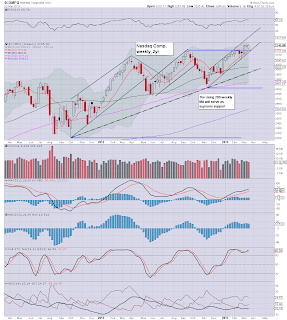 The tech sector only fell 0.13% this past week, but its looking like a castle-top is being put in. First target is the very obvious 3000 level. That is a good 7-8% lower, and looks viable in late April/early May. 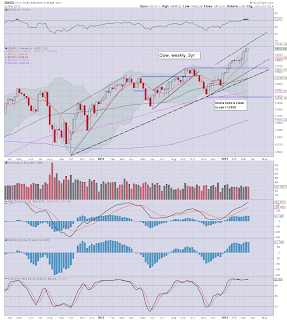 The mighty Dow closed a 'not entirely bearish' 2pts lower on the week. Underlying MACD cycle did tick lower, but we're very high in positive territory. Its going to take at least 4-6 weeks just to get back to the 0 line. First target for the bears should be 13700, that's a rather significant 800pts lower 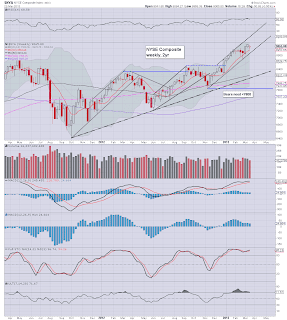 The master index slipped just over 0.5%. In terms of waves/count, you can see 5 clear little waves from the November low.  Underlying MACD cycle is much weaker than most other indexes, it won't take more than 2 weeks to get this back into sell side territory. Bears primary target for April/May should be 8500/8400 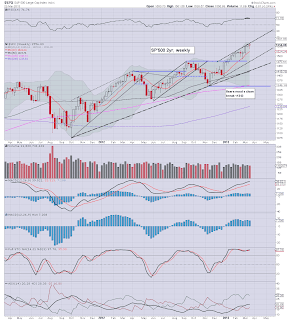 The SP' is still to break the Oct'2007 intra day high of 1576, but we sure are close. The recent high of 1563 looks very vulnerable to being taken out next Mon/Tuesday, and then we could see a brief spike high into the 1570s.

The 1580s look moderately possible, but I certainly don't see the 1600s this side of the summer equinox! 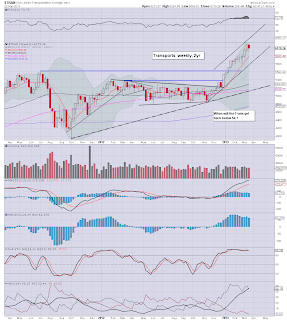 The old leader lead the way up...and its leading the way back down. Trans lost 1.5% this week, and it could fall a long way, perhaps back to the old resistance high of 5600, that's around 9% lower.

A slight fall in the US market this week, but clearly, its nothing for the bears to get excited or confident about yet. There are very clear rising channels on all the main index charts. Effectively, bears need to break <sp'1520 as at end March. That's only 2.5% lower from where we are currently trading.

All things considered, I think the '5 waves up' theory from the November low of sp'1343 is about to be proved correct.

The coming week will be a shortened one, since we're closed for 'Good Friday'. There are bits and pieces of econ data Mon-Thursday, with the latter being the more important day - GDP (final revision, market is expecting +0.6%, vs +0.1%), and the Chicago PMI data.

If we're in the 1570s by late Wednesday, and the GDP/PMI data comes in disappointing, it'll be a very natural excuse for Mr Market to start selling off from any spike highs.

In terms of a downside target for April/May keep in mind this chart...where I have added a count... 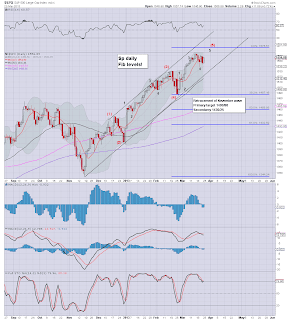 I'm roughly assuming we max out next week in the mid 1570s. That offers a fib retracement in the 1490s as first primary target in view.

However, there is ample reason why we could trade much lower across the next 4-6 weeks, perhaps even into the 1430/20s - where there is a key ES/SPY gap, yet to be filled.

So, I remain seeking one tiny little burst higher into the sp'1570s..before a reversal. Indeed, a big intra-day reversal from the 1570s would make for a perfect multi-month cyclical top.

back on Monday :)
Posted by Trading Sunset at 20:03:00
Email ThisBlogThis!Share to TwitterShare to FacebookShare to Pinterest

The main indexes all closed moderately higher, with the sp' comfortably closing in the 1550s. Transports closed 1% higher, and certainly offers hope to the bulls of further upside next Mon/Tuesday, with the sp'1570s very viable to complete a key cyclical top. 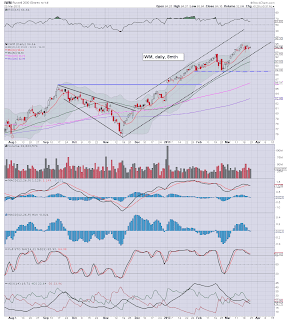 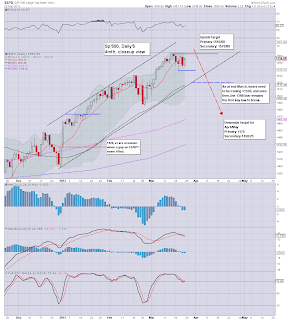 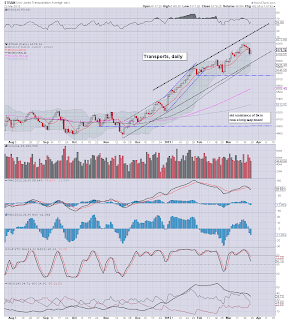 So despite a little bit of bearish hysteria on Thursday, the market closed the week on the upside. Bears can understandably feel annoyed and frustrated, but then, that's been much the case for the past four years.

Best guess remains a brief spike higher into the sp'1570s next week, and then I will be looking for some kind of choppy top to form. That could take some days, perhaps even a few weeks.

However, I sure don't expect earnings season for Q1 to be 'inspiring', so we should be seeing a multi-week down cycle becoming obvious by mid April..and continuing into May.

That's all for today..and this week. Have a good weekend!
--

*next main posting, late Saturday, on the US weekly index charts
Posted by Trading Sunset at 00:00:00
Email ThisBlogThis!Share to TwitterShare to FacebookShare to Pinterest
Newer Posts Older Posts Home
Subscribe to: Posts (Atom)