Most of the US indexes climbed for a fourth consecutive week, with the Trans/R2K leading the way, with gains of 2.3% and 1.3% respectively. The exception was the Nasdaq, which slipped a moderate 0.35%. Near term trend remains very much to the upside. 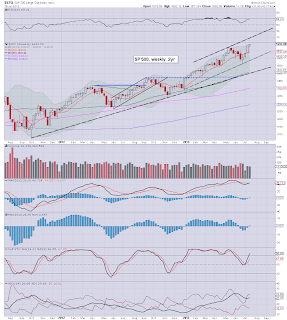 The sp' managed another 0.7%, and the weekly close of 1692 is indeed yet another all time historic daily/weekly closing high. Underlying MACD (blue bar histogram) cycle is now positive again, and we could easily trundle higher for another few weeks.

Bulls should be marginally concerned that we're a mere 3pts from the weekly upper bollinger of 1695. That will jump to the 1700s at the Monday open, so...there is further upside of around 1-2%..- at most, this month. 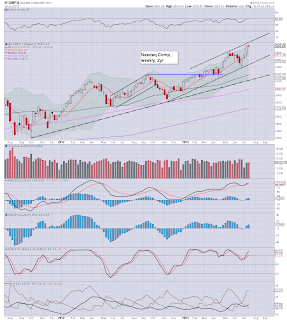 The tech' closed the week with a slight decline, but still, the broad trend is upward. Bears need to break back under 3500 to have any hope of a new multi-week down cycle. Best bear case later this Aug/September, is for a fall back down to 3300/3200. 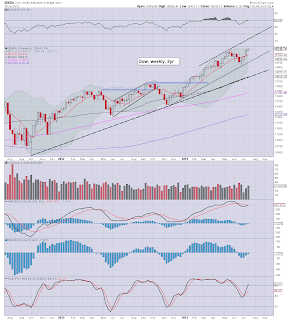 The Dow managed another 0.5%, although interestingly, the underlying MACD cycle is still moderately negative. A failure for the bulls to advance any further would be somewhat interesting. 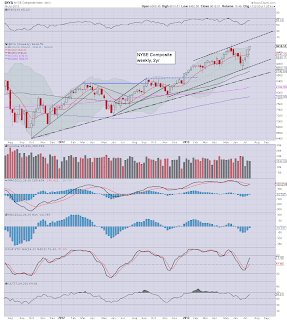 The master index climbed a rather impressive 1.3% this week, and is now a mere 5% away from hitting the big 10k level. Like the Dow, the NYSE Composite MACD cycle is still negative, but looks set to go positive at the Monday open. 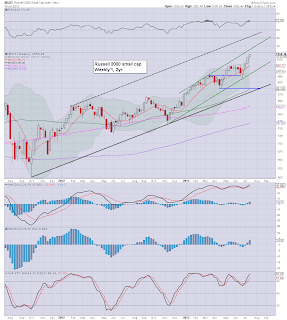 Once again the R2K is leading the way, and powered 1.3% higher. There is likely resistance in the current area, it will be difficult for the bulls to manage more than another 1-2% higher. Best case downside for September is around 925, but that is a good 10% lower. 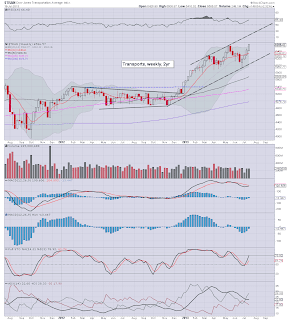 Once again the 'old leader' is leading the way, and ramped 2.3% this week. Underlying MACD cycle is still negative though, and despite the price ramp, there is no bullish cross yet.

So, that's week'4 up for the QE-fuelled US markets, and there is virtually no sign of weakness out there.

Even (relatively) lousy earnings from MSFT and GOOG were not enough to particularly upset the market on Friday. A year or two ago, such results would have seen the market drop 2% or more. I have no doubt the incessant QE-pomo is helping to nullify any bad news. 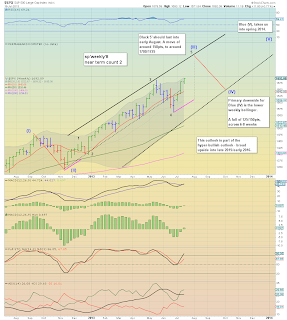 I am trying to keep an open mind on when the current up wave will max out. It could indeed be as early as next week. On balance though, I'm guessing, more likely the week of July28, if not early August. As ever...one trading day at a time, regardless of any 'best guesses' that I have.

There isn't much of anything next week, aside from some (arguably) minor housing data. I would suggest the only key econ-data will be Durable Goods orders on Thursday.

For the bears, this remains a market to avoid. Best case downside for September looks to be no lower than sp'1550/60s..which is where we were just a month ago. Baring an end to the QE-pomo, we'll surely just broadly climb all the way into spring 2014.

Can you imagine how delirious the cheer leading maniacs on clown finance TV will be, when the sp' breaks the big psy' level of 2000 ? After all, as they have always believed, a rising equity market must mean the economy is similarly doing 'better than ever'.

For those not wrapped up in such wilful delusions though, we have some 'interesting' years ahead in this twisted market.

back on Monday
Posted by Trading Sunset at 18:32:00
Email ThisBlogThis!Share to TwitterShare to FacebookShare to Pinterest

It was the fourth consecutive week higher for the US equity markets, with the sp +0.7% @ 1692. That makes for a rather incredible gain of 132pts - almost 9%, across just 19 trading days. The only issue in the immediate term, is when will the current up wave exhaust itself? 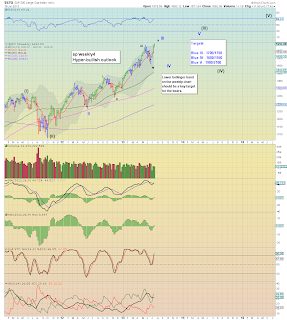 I thought I would close the week with the rather disturbing 'hyper-bullish' scenario.

I am endeavouring to keep an open mind, but unless QE ends - not only in the US Federal Reserve, but in other central banks, then world equity markets will surely just keep battling higher..at least into spring 2014..if not 2015/16.

Best guess in the immediate term, is that we'll see the current up wave conclude within the next 1-3 weeks, and then proceed downward to the lower weekly bollinger..which by September will be in the 1550s.

From there...baring an end to QE (which I doubt).. the markets will relentlessly ramp into spring 2014..with the sp' breaking the big 2000 level.

I realise that outlook is not what many will want to hear, but that's how I am currently seeing things.

Goodnight from London
-
*next post, late Saturday, on the US weekly index charts.
Posted by Trading Sunset at 04:00:00
Email ThisBlogThis!Share to TwitterShare to FacebookShare to Pinterest

The main equity indexes closed somewhat mixed, with the Dow/Nasdaq held back by declines in MSFT and GOOG. The sp'500 managed a new closing high, +2pts @ 1692. The sp'1700s look highly probable early next week. 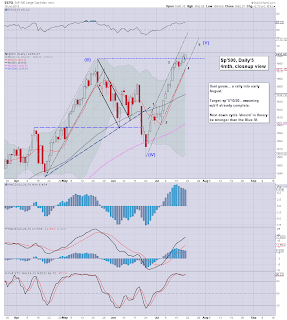 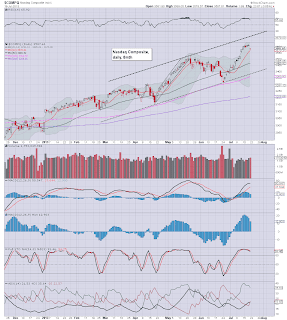 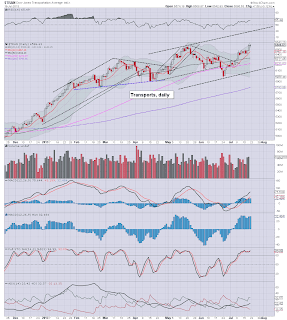 Aside from the price action in Microsoft (MSFT), it was a very quiet opex.

It has to be noted, considering the very significant earnings misses in MSFT and GOOG, the indexes held together exceptionally well. A few years ago, such results would have seen the dow fall 200/300pts...but no....not in the current QE supported market.

Underlying price momentum remains extremely strong to the upside, and the bears are going to have a real tough time halting the rally...never mind actually starting a new down cycle.
--

*I remain entirely on the sidelines.