It was the first major down week in the main indexes since late May. The rising trend from the June low of sp'1266 has been busted on a number of indexes, and it appears likely there will be a very significant down move across the next few months.

How far that down move goes is of course the big question, the monthly charts would suggest we can go as low as sp'1225/1175. However, that target zone should only be considered as 'viable' if we can first break below secondary rising support in the 1370s.

Lets take a look at those weekly charts for the six main indexes... 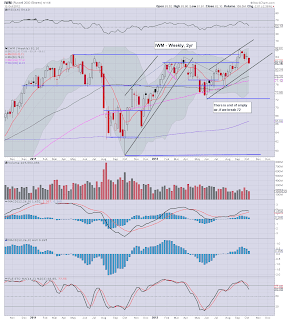 Another down week for the Rus'2000 small cap (R2K). The R2K lost a moderate 2%, but did close below the important 10MA. However, so far, its still well within its ascending channel from the June low.

Bears should seek a weekly close <80 in the coming weeks. 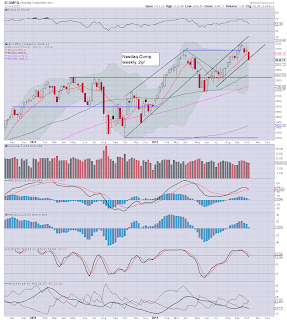 A very bearish week for the tech' sector, not least with AAPL dragging down its host index. The Nas' closed the week below its channel, and is well below the 10MA. A few daily closes <3000 next week would be strong confirmation for major declines into November. 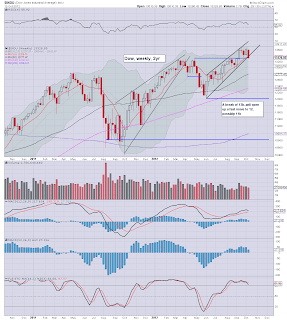 The Dow also closed outside its channel, and is looking pretty weak. First target for the bears should be the big 13k level. A few daily closes <13k, should open up a swift move to 12k. The doomers might justifiably argue that a break <13k...bodes for a good move all the way to 11k.

The monthly chart also targets 11k as a likely late-2012 floor. 11k would most definitely be a 'dip buying' zone, even for the permabears. 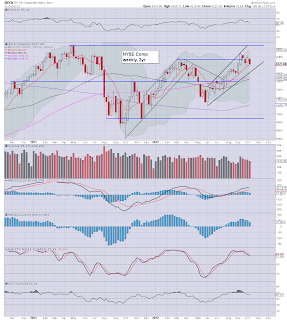 The master index is a more stable index much of the time, and it remains well within its channel, and even above the 10MA. Certainly, it will be another week or two before the broader NYSE Comp' matches the current state of the other indexes. 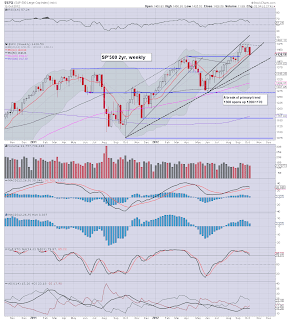 Without question, it will take some sort of major econ-shock/event to cause a series of big one day declines to break through so many of these secondary support levels. Perhaps Q3 GDP data (Fri' Oct'26) can push the market over the edge? Could Q3 data come in provisionally negative? 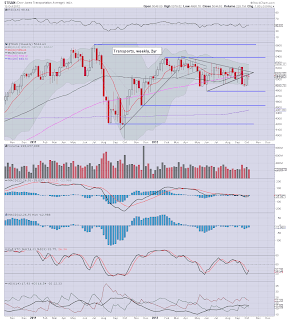 As noted many times, the tranny has been weak since the start of the year, and continues to do its own thing, not least this week when it actually managed to close flat. I suppose some could say it has back tested what was the key level of 5000.

First target for the doomer bears should be 4500 or so. Best case would be 4000. It is inconceivable to imagine the tranny <4k until summer 2013 at the earliest - and that's even if assuming a 'major secondary global deflationary wave'.

Overall then, most indexes closed lower, and we have a few clear breaks below the rising channel. Tech is weak, and as many have asked, is AAPL signalling a top?

The MACD (blue bar histogram) weekly cycle is continuing to tick lower, and we are set to go negative cycle on the main indexes within the next 1 or 2 trading weeks. Major market moves often occur as the MACD crosses to a negative cycle.

So, I would be particularly mindful of 'possible serious downside' in the last trading week of October. The fact we have a US election really confuses matters, but still, there IS a window of opportunity for the bears this Autumn.

I will again note, I will wish to see a weekly closing on the VIX >20, to really have some real confidence that the market will see a major down move into year end.

I'm seeking some sort of brief wash-out on either Monday/Tuesday. A quick move to sp'1415/00 seems very viable, with the VIX spiking to 18/19. Its even possible we could go to 1380/70, but anything below that...no way, not in this down cycle. We have econ-data on Monday (retail sales, Empire state manu' survey, Busi' inventories), so there is potencial for market to get a little rattled.

Bears are still needing to put in a proper 'lower high'. The recent double top in my view does not count as a lower high, not least since the Dow' actually broke a new high (Fri' Oct'5)

I'd first like to see sp'1400, then a lower high in the 1440/50 zone, before taking out the secondary rising support in the 1370/80 area. If that can be achieved, then it will be time to put on your flak jacket and prepare for November fireworks.

*special note...thankyou to those who support the site, and to also to those who post the occasional comment. Its good to know someone is out there ;)

Back on Monday
Posted by Trading Sunset at 20:09:00
Email ThisBlogThis!Share to TwitterShare to FacebookShare to Pinterest

Lets take a look at all 6 of the main indexes... 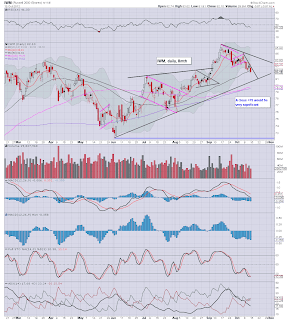 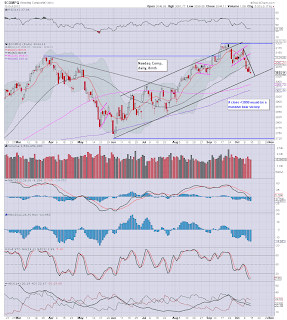 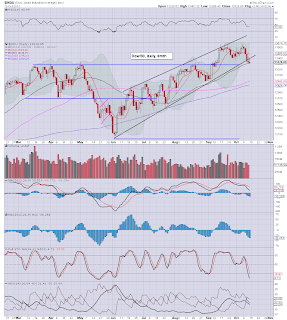 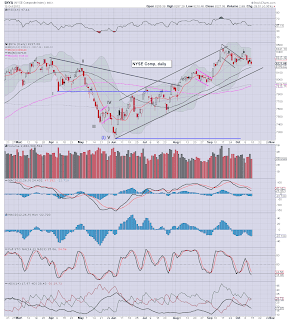 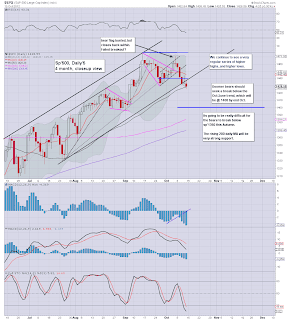 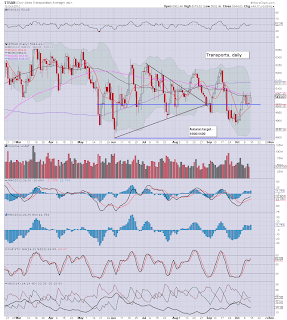 First, a note on the transports. After major weakness, the tranny seems to be in a world of its own right now. It could just be resetting itself - whilst the other main indexes play catch up.

The other main indexes are clearly all trending lower, and we are starting to break below some interesting levels

The Sp' closed just fractionally above the important 50 day MA, but it did break it earlier in the day, and many 'out there' seem resigned that the sp' will now trade down to at least sp'1410/00 in the next day or two.

Whilst the indexes have traded lower by around 3% from the QE spike highs, the VIX remains in the historically very low 16s. It may well be the case that the VIX maxes out on Mon/Tuesday in the 18/19 zone. VIX'20 just looks out of range right now, unless the SP' can crack the previous cycle low of sp'1397 - which I don't believe is viable in the current down cycle.

So, I hold short across the weekend, seeking an exit on the next major down day - hopefully Monday!
--

*there will be a detailed weekly cycle update, due later on Saturday.