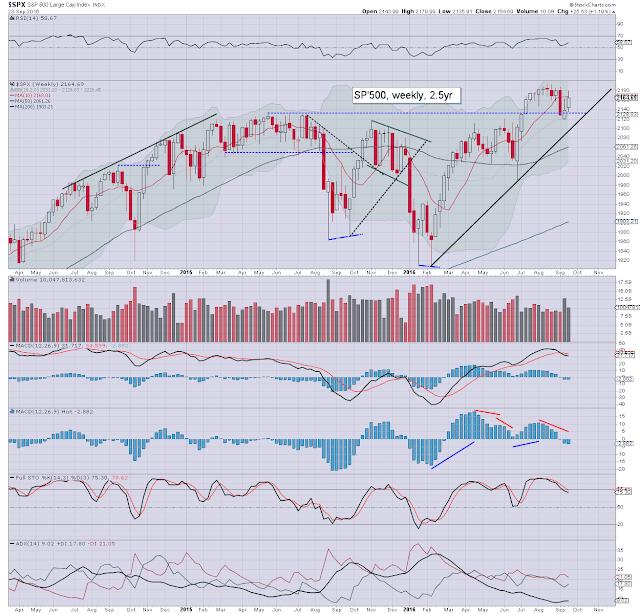 Underlying MACD (blue bar histogram) cycle remains moderately negative. As things are, another bullish cross appears viable in 2-3 weeks. The upper bollinger is offering the 2220s. By late Oct/early Nov', the lower bollinger will be around the 2100 threshold.

It remains the case that equity bears have nothing to tout unless the market starts putting in some daily closes in the 2050s or lower.
-- 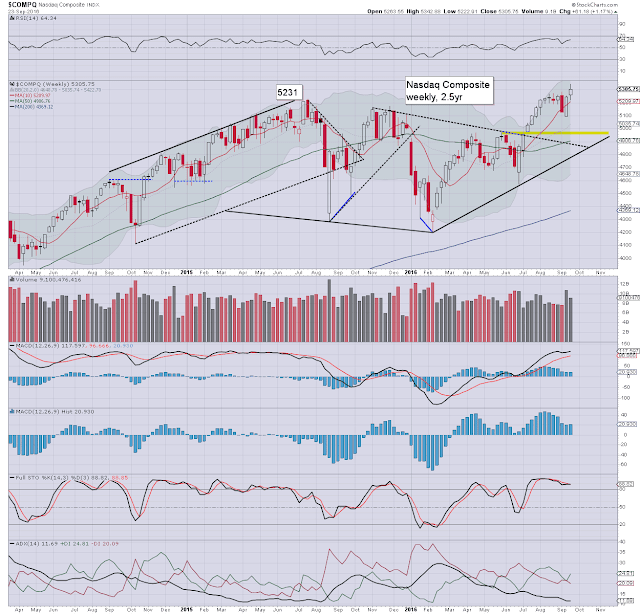 A second consecutive net weekly gain for the Nasdaq, breaking a new historic high of 5342, settling +1.2% @ 5305. Upper bollinger is offering the 5400s in the near term. If the market can hold together across the tricky month of October, then the 6000s are an entirely valid target for late spring/early summer 2017. First big support is around the 5K threshold, and that is a clear 300pts (6%) lower! 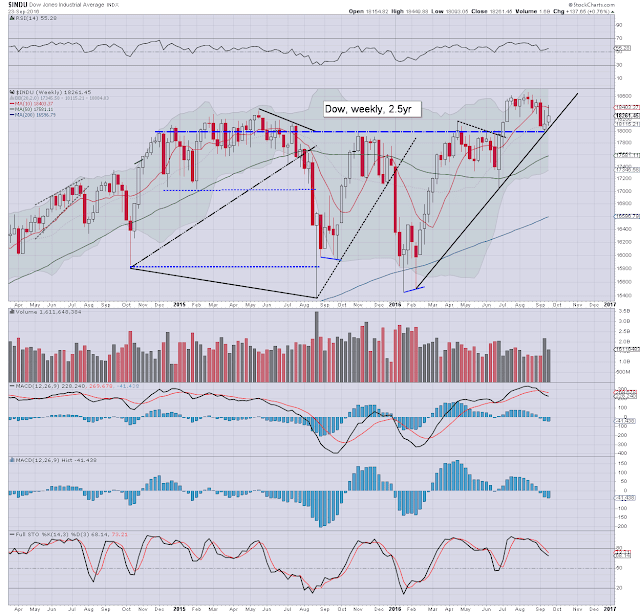 The mighty Dow was the laggard this week, but still managed a net weekly gain of 0.8%, settling @ 18261. First target is the recent historic high of 18668. Upper bollinger will be offering the 19K threshold by late Oct/early Nov. Any price action >19k, should give clarity that Dow 20K will be seen. From there, grander upside target is 25/26K, but that would likely take until spring 2018. 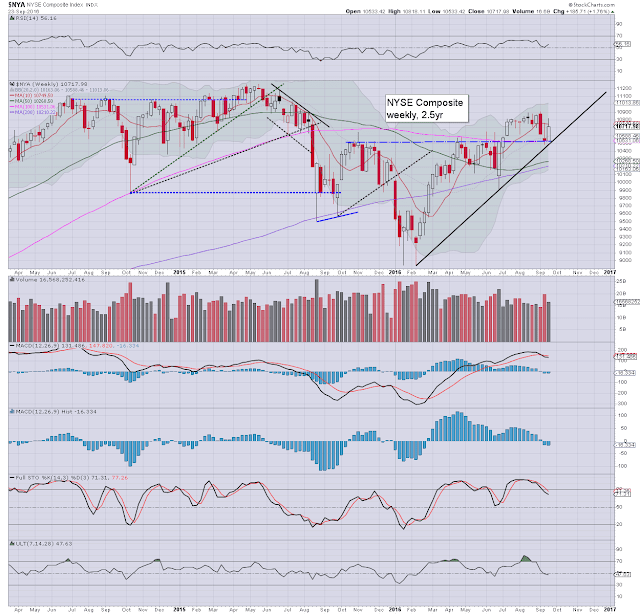 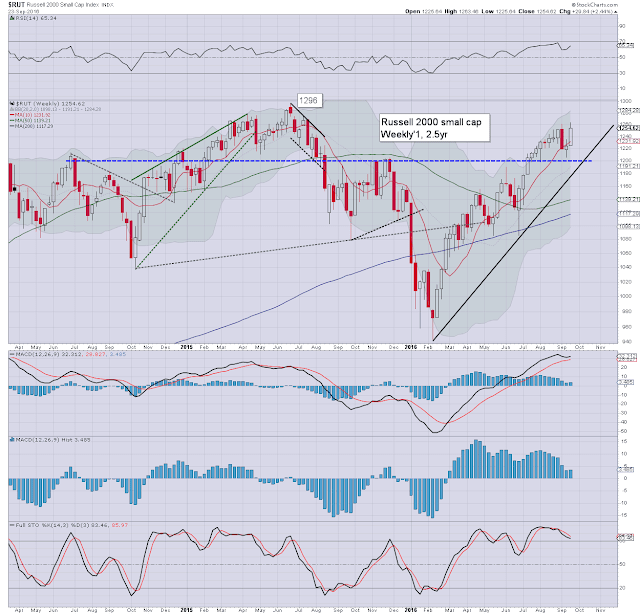 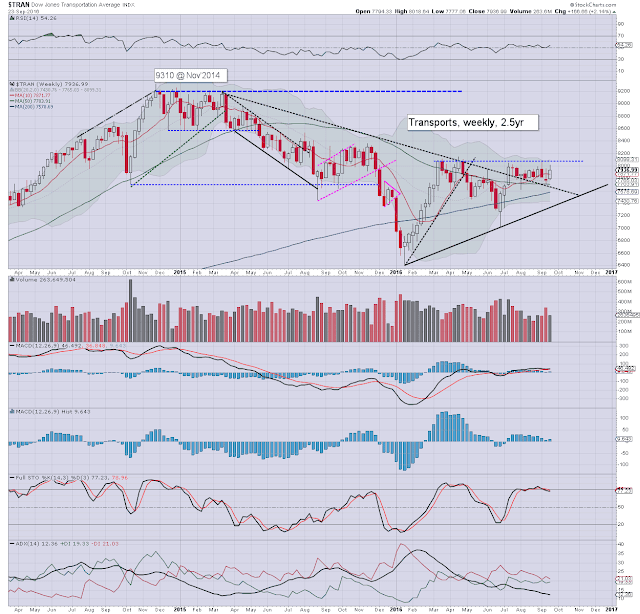 The 'old leader' - Transports, settled +2.1% @ 7936. There remains powerful resistance around the 8K threshold, which has been a strong wall since March. Another attempt to break/hold >8k seems probable, with the 8300/400s viable by late November. Even on the most bullish outlook, the Tranny is still at least 4-5 months away from challenging the Nov' 2014 historic high of 9310.
--

The US equity market continues its broad climb from the Jan/Feb lows.

The Nasdaq is leading, with the sp/dow following. The R2K is the next index set for a new historic high.

Equity bulls have around 5% of downside buffer zone, before any critical technical damage is done.

Best guess: continued broad upside into Q3 earnings, a little 'election inspired' chop/volatility, and then climbing into mid Dec'.. when the fed are set to increase rates.
--

I generally try to refrain from adding numbers/letters to most of my charts, but the following is something that many of you should be familiar with. 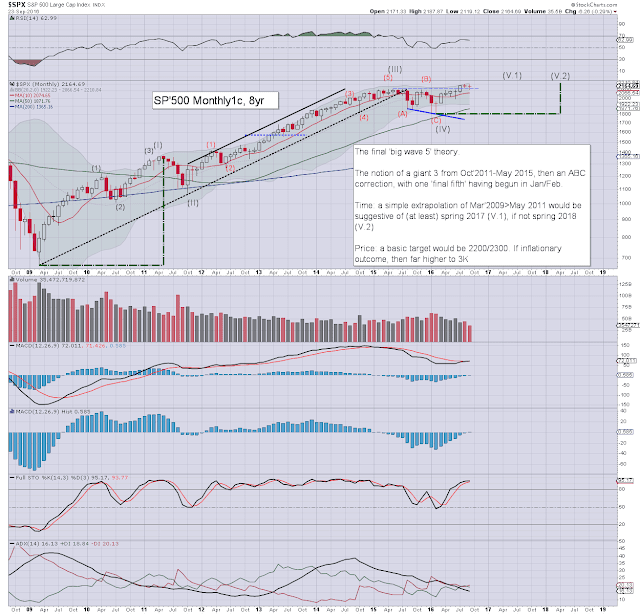 The important point of this chart does not concern possible upside price targets, but the aspect of time. Considering the duration of the wave from Mar'2009 to May 2011, the current wave that began in Jan/Feb' 2016 will almost certainly continue into next spring. If that is the case, we could be trading in the sp'2400s.. or even 2500s by June/July.

It is highly notable that having decisively broken above 2138, the next big fibonacci price level is not until 3047. I'll cover the issue of price in more depth at a later date.
--

*there is an absolute truck load of fed officials across the week. Most notable, Yellen is speaking (video conf') at the Kansas city Fed, Thurs' AH.


--
If you have valued my posts since Feb' 2012, you can support me via a monthly subscription, which will give you access to my continuing intraday posts, at my main home of permabeardoomster.com

If you think I'm worth the grand sum of around $1 per trading day, then subscribe!

In any case.... enjoy the autumnal weekend
--

Cooling into the weekend 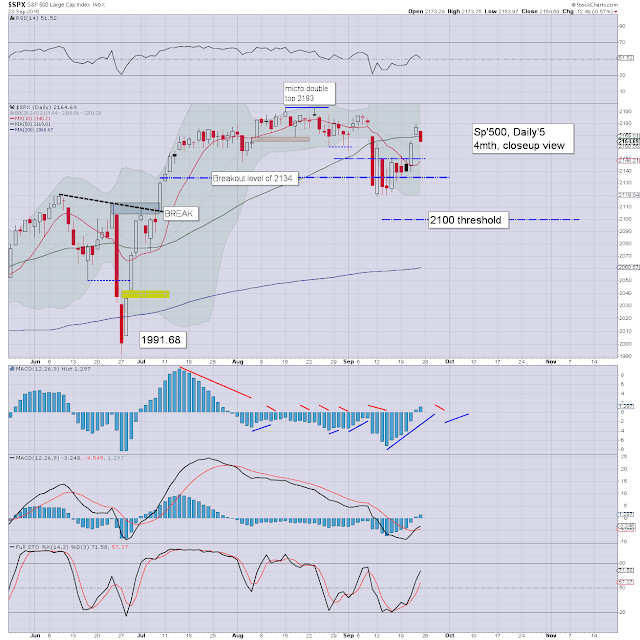 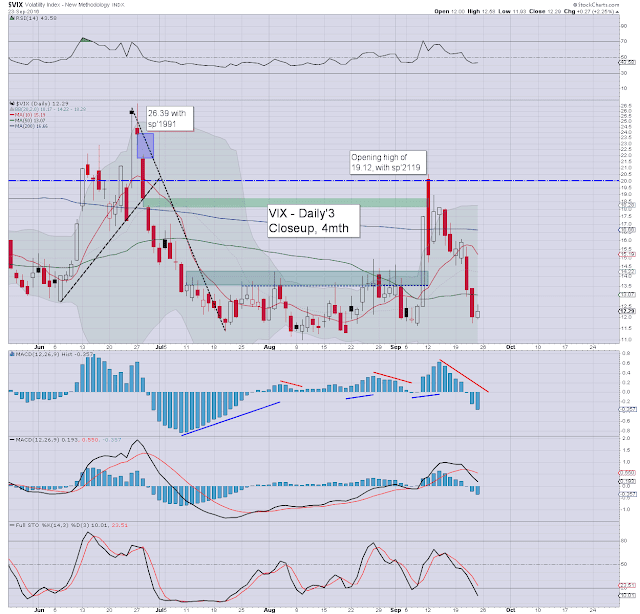 After two broad net daily gains, it was not surprising to see a little cooling into the weekend. Its especially notable though, that the VIX only climbed a little, not even able to reach the 13s.

*the weekend post will appear Sat' 12pm, and will detail the US weekly indexes
Posted by Trading Sunset at 00:00:00
Email ThisBlogThis!Share to TwitterShare to FacebookShare to Pinterest
Newer Posts Older Posts Home
Subscribe to: Posts (Atom)