The broad equity market was fractionally higher in November, after moderate declines in October. The Dow'30 index was the anomaly, declining by 0.5%. Despite the 4-5% bounce from the mid November lows, there is still distinct multi-month weakness. 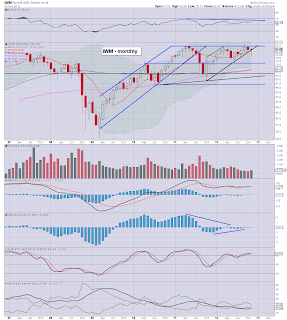 The R2K is right back into the lows 80s, after testing and holding the key 76s. This was as expected, and for the bears, its critical to not put in any daily closes in the 83s.

The trend indicators are mixed, and its hard to say much about the R2K, other than its almost right back at the top of the range - where its been stuck for almost a full year. 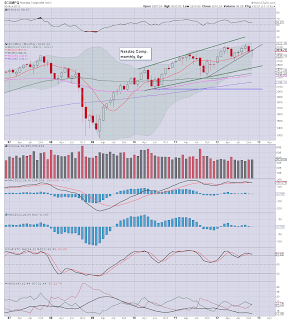 The once powerful tech' index certainly saw a significant latter month bounce, not least inspired once AAPL held the hugely psychological $500 area. Trend indicators are still a touch bearish, although the Nasdaq managed to close November above the important 10MA. 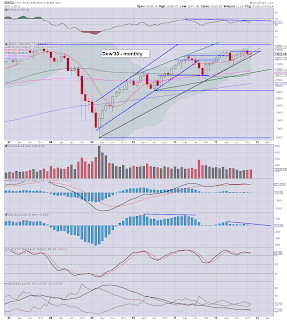 The Dow was the only main index to close the month lower, and actually closed under the 10MA

Most important to recognise is the increasingly significantly 13k threshold. The Dow managed to barely hold it at the Friday close, and with the 10MA @ 13031, a few daily closes <13k in early December would be a real problem to those on the bullish side.

Indeed, as some realise, if 13k is again broken, there is the potential for some sort of mini-waterfall (in the style of May'2010), taking out the June low @ 12k. 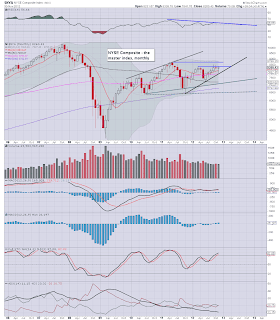 The master index is right back to almost the highs of the year, and is just a few percent away from breaking the key 8500 level. All those seeking a bullish end to the year, with continuing strength into 2013 should be seeking a monthly closing >8500. All trend indicators are currently still moderately bullish. 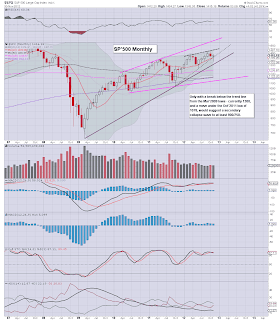 The SP' saw a pretty sharp V shaped trading month, falling from the 1430s to 1343, and closing @ 1416. We're now back to almost the pre-election levels, and the bulls only need a 2% move higher that would arguably wreck ALL near term bearish outlooks.

Lets be absolutely clear, if we see a few daily closes in the 1430s, or certainly the 1440s, then the bears are back to square one again.

Trend indicators are marginally bearish, and only if we get a monthly close <1370, can the bears be confident into next year. The June 1266 low will be real difficult to take out, even if the market gets increasingly spooked by lack of fiscal cliff agreement. 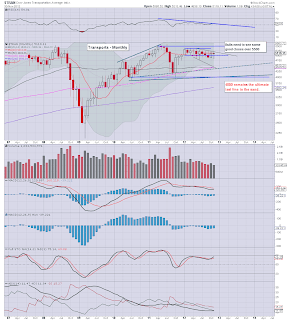 The tranny remains in crazy-land, and is once again back above the 5k level. There is still NO decisive break either way. Bulls need >5500, bears should be seeking <4800. Trend indicators remain negative, but are starting to tick a little bit higher again.

The month proceeded largely as I was expecting, with a decline to around the sp'1345 area, and then a wave'2 'stupid bounce' almost right back to where we started. Yet, from a chartists perspective, the bounce we've seen could simply be a very natural back-test of the original rising (now broken) support from Oct'2011

I hold to my original outlook, and as seen on the bigger monthly charts, I'm seeking a major wave lower - consisting of 5 smaller waves, most probably concluding in early Spring 2013. On any basis, the low sp'1200s would be a very good buying level - even for the permabears! 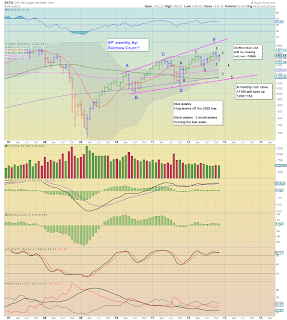 There is a fair bit of econ-data and news (especially from the EU) next week, so it should be pretty active in market land. Indeed, we probably only have two 'busy' weeks left of the trading year. Once we get past Fri'14th, its very likely to settle down.

Interestingly, if we have some kind of down cycle that concludes by Dec'14, there is still the very real possibility of a Santa ramp into year end. Historically speaking, the Santa rally often doesn't get going until after Christmas anyway!

I think there is a very high probability of a gap lower on Monday morning, perhaps as low as sp'1395, where I'd guess we'll get an intra-day bounce. What will be important next week for the doomer bears, is to take out the Wednesday low of sp'1385. If that happens, then a 'surprise' trap door (at least to the clown channel finance TV cheer leaders) will open, and we might be able to take out the November low of 1343, and just keep falling, all the way into the 1200s.

First things first though, lets see if can break the rising channel/trend (see hourly chart post). Anything <sp'1400 would probably be enough. If we're trading <1380 at any point next week, bulls will need to raise their shields and make a run for it.
--

*I will be back on Monday. Have a good weekend.

Good wishes from London
Posted by Trading Sunset at 18:32:00
Email ThisBlogThis!Share to TwitterShare to FacebookShare to Pinterest

November comes to an end, and whilst many cheer leaders on the clown network finance TV are looking forward to the usual 'Santa rally', ...maybe...just maybe..the only presents Santa is bringing this Christmas are lit sticks of dynamite.

*I will do a full posting on the US monthly index charts tomorrow, but lets take a quick peek on how we closed the month. 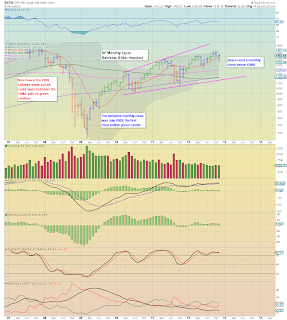 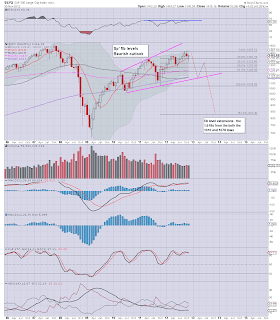 First, as I noted yesterday, I was seeking at least another blue candle on the monthly rainbow charts..and a blue candle we have!

So..the 'provisional' warning of trouble that flagged up in October, has been confirmed this November. This is good, and should please any bear out there.

Based on a collection of bits and pieces, I'm seeking sp'1225 in the next wave. Now, I might be completely wrong of course, and a few daily closes in the 1430/40s would wreck my outlook.

However, if we do see a major wave lower, a VERY natural level for the market to floor - especially if it breaks the June'1266 low, would be somewhere around sp'1230/20.

*don't get too fixated on particular Fib' levels though, I think they should be used as a rough guide, and of course, many traders don't like them anyway. I can certainly understand the latter viewpoint.
--


Well, November went very much as expected - which was pleasing to see.

If December goes as I expect, then I will be considerably more pleased, and much more confident of where we are going to be trading across 2013.

The main indexes closed broadly flat, despite a closing hour 3.5bn buy order from MS. Today would make for a near perfect turn day, bears should be seeking confirmation with at least moderate declines on Monday. 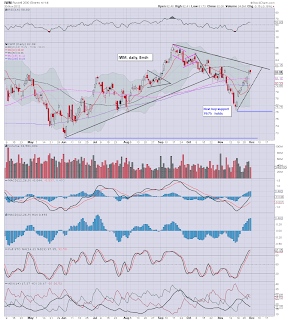 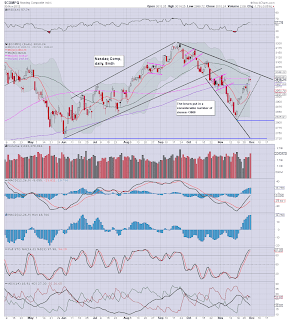 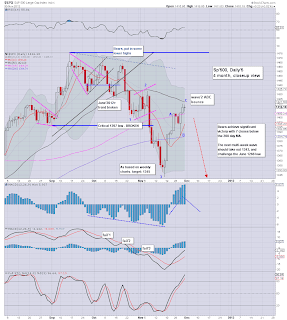 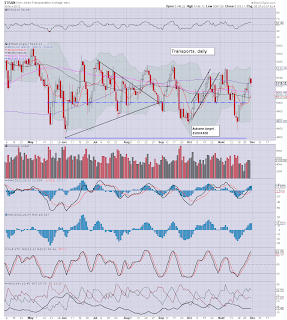 Well, that's it for another week, and another trading month. It was certainly a bit of a messy trading day, not least the closing hour which was starting to slip lower...and then Morgan Stanley appear with 3.5bn to spend. Who ordered that giant order, hmm ?

A brief note on the MACD (blue bar histogram) cycle, which is now very high on all indexes. We are toppy on any basis, and a 1-2 week down cycle is very feasible, even if it puts in a slightly higher low >1343.
--

As it is, I am holding to my original outlook, which so far..is on track. We hit my target zone of sp'1410/25, and now we've seen the first trading day where we might be levelling out, before the next major wave lower. 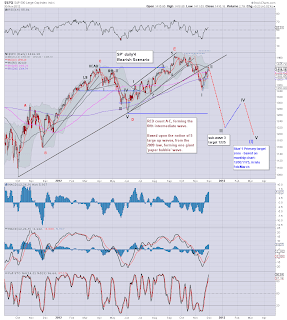 Its going to be real interesting to see whether I'm also broadly right about the next wave. We'll know soon enough.