VIX climbs for a third week

With equities settling lower for a third consecutive week, the VIX was naturally continuing to rise, settling the day +12.8% @ 27.02. Across the week, the VIX attained a fractional net weekly gain of 0.04%. Relative to equities, the VIX is relatively subdued, threatening a short term equity rebound into the next FOMC (Jan'27th). 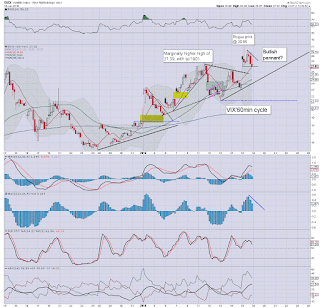 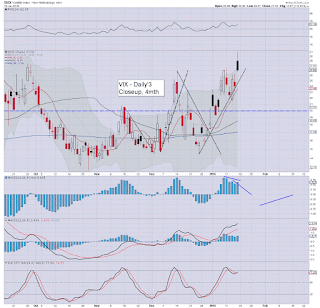 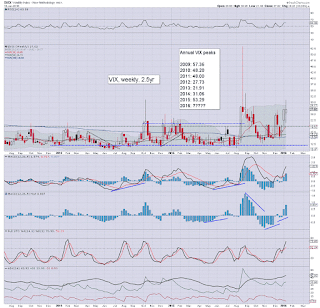 Of course, the style of equity price action is somewhat different, but still, I'd have expected to see front month VIX at least in the 35/40 zone.

In any case.. much higher VIX levels look due in the weeks and months ahead.. as the market increasingly unravels. 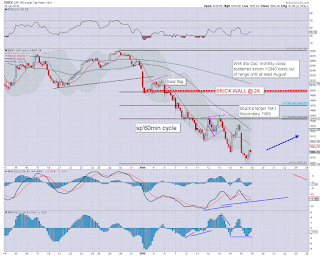 ... and another week at the wildest and most twisted casino in the world comes to a close.

We've only had 9 trading days of the year, but it feels like so much has happened.

As I will keep saying... unless the equity bears can attain a monthly close under sp'1500, any talk of sp'1000.. or the even more crazy 500s.. remains in the realm of fantasy land.

the usual bits and pieces across the evening.. to wrap up the day
Posted by Trading Sunset at 21:01:00
Email ThisBlogThis!Share to TwitterShare to FacebookShare to Pinterest

US equity indexes are set for a third consecutive net weekly decline, having broken a new cycle low of sp'1857.. the lowest level since Oct'2014. VIX is holding gains of around 20% in the 28s... which considering the equity market weakness, is arguably somewhat subdued. 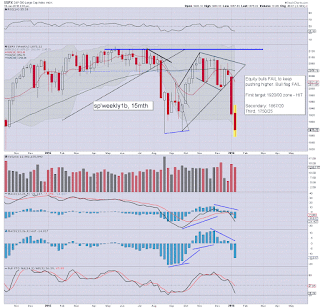 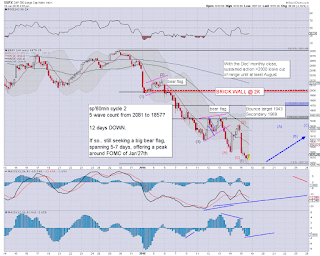 Regardless of the closing hour - which frankly.. could see almost anything happen, its a third week for the equity bears.

Clearly, any bounces are to be shorted in the weeks and months ahead.

From a pure technical perspective, by this April, the leading/headline indexes (sp'500, dow, nasdaq) will have the same MACD setup as Sept'2008.. and we remember how that month traded, right?
-

I'll keep DISQUS open for the 3pm post on my screen in the closing hour.. so.. if you want to say hello... please do !

yours.... not short... but neither getting his ass kicked on the long side. 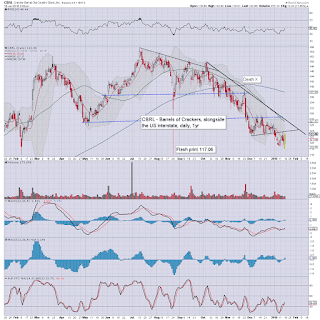 Today its offering a rather powerful hyper-reversal candle. First upside target would be the 50dma in the $127s
- 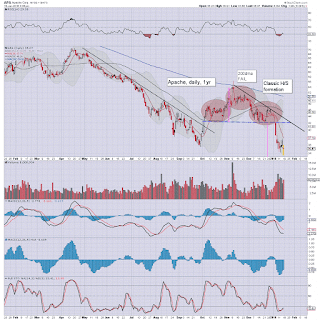 'hollow red' reversal candles appearing all over the place... 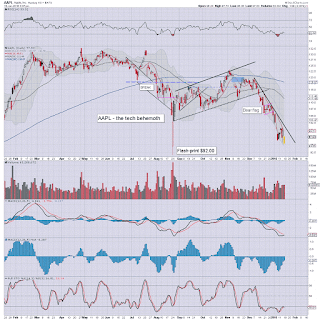 
3.12pm.. As things are, the hourly MACD cycle is set to turn positive early Tuesday, but who wants to seriously go long on such a trend, whilst price action remains broadly weak?

Today was day'12.. and typically... that is usually the max number of days in a short term down wave.

Arguing against that is that the VIX remains relatively subdued, and there is no sign of capitulation.

3.27pm... We could still close as high as 1890.. as there might be a fair few short side traders who fear the PBOC doing something this weekend.
-

3.37pm... Increasingly looking like the market makers are striving to pin the market at sp'1885/90
Posted by Trading Sunset at 19:52:00
Email ThisBlogThis!Share to TwitterShare to FacebookShare to Pinterest

US equities remain very significantly lower, sp -46pts @ 1875, having seen an earlier low of 1857.. decisively breaking the Aug' low, and confirming the much earlier breaks in the Trans/R2K. VIX remains elevated, +22%, but relative to the equity weakness, is somewhat surprisingly only in the 29s. 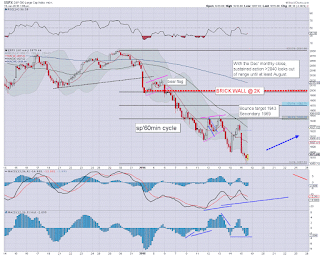 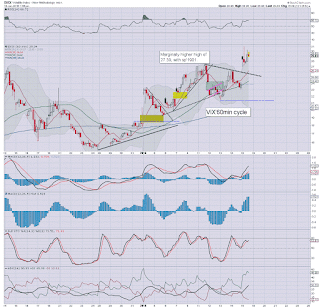 *VIX is looking somewhat toppy, and it is indeed surprising to see VIX still not trading into the 35/40 zone.
--

With each new low, the equity bounce target is lowered, and it should be clear to even the cheerleaders on clown finance TV, we ain't going to be >2k for a long.... long time.

2.17pm.. Cyclically, hourly MACD cycle is offering a turn/floor from sp'1857... but there are an awful lot of reason to dismiss the smaller cycles right now.


Posted by Trading Sunset at 18:57:00
Email ThisBlogThis!Share to TwitterShare to FacebookShare to Pinterest

The December close was definitively bearish, and at such time, consideration of the bigger weekly/monthly cycles provided a first key target zone of sp'1750/25, specifically, 1730. That is clearly viable in the immediate term, and would make for a natural short term capitulation before a bounce. 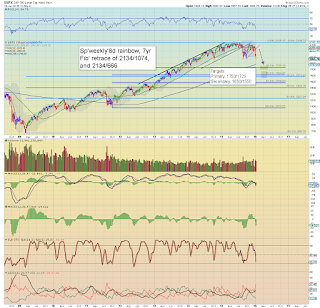 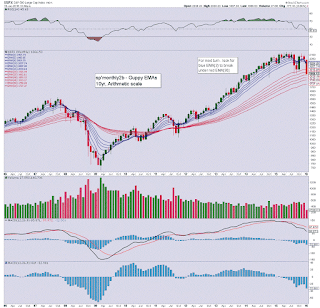 Things are clearly very bearish today.. and there is serious threat things will unravel across this afternoon.

It should be clear to anyone who decides to hold short across the weekend, the China leadership might lower rates, change the RRR, or hit the BUY button.


A further concern should be that most short term down waves never exceed 12 trading days... and today is day'12.

--
For now... stay tuned... the next 3 hours could be rather entertaining.
Posted by Trading Sunset at 17:53:00
Email ThisBlogThis!Share to TwitterShare to FacebookShare to Pinterest

From a trading perspective, Mr Market is trading in no mans land... too low to short.. but too risky to go long, with threat of much lower levels at next Tuesday's open. Considering it is opex, and with a 3 day weekend ahead, it is surely a case of sitting it out.. and keeping things simple. 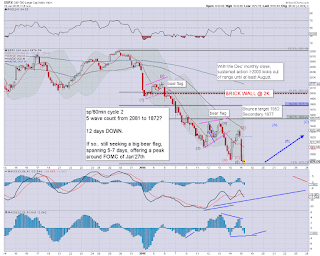 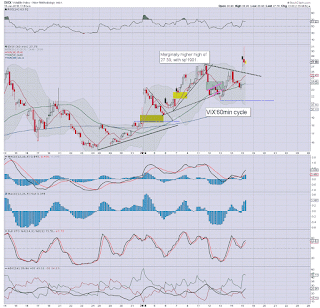 The 60min equity chart is the 'best bounce' scenario.. which were one to occur, would now drag out into FOMC week.

However, it should be clear.. with the market remaining broadly weak, there is LOW confidence in such an outlook... not least as the bigger weekly/monthly cycles are both suggestive of the 1700s in the near term.

.. and yes, I'd accept that is a sit on the fence viewpoint.

11am update - its clearly a mess

US equities break a new cycle low of sp'1872.. a mere 5pts above the Aug' low, whilst keeping in mind the Trans/R2K are well below last Aug'. VIX is so far unable to break above the opening high of 28.96... and considering we saw VIX 50s when sp'1867... the current VIX is surprisingly low. 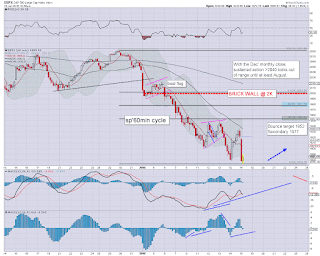 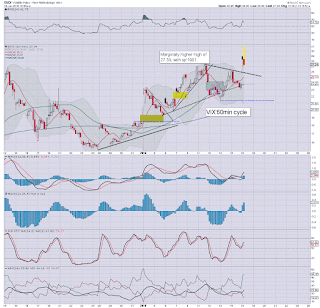 So much for the Thursday short term floor of sp'1878.

Indeed, a bounce peak on Fed day is often the case.
--

However, lets be absolutely clear....

From a trading perspective, this is a real mess...

Would you really want to chase short from these levels?

For most.. its arguably a case of sitting it out ahead of the long weekend.
-- 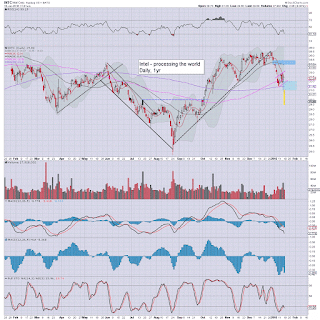 --
time to cook
Posted by Trading Sunset at 15:51:00
Email ThisBlogThis!Share to TwitterShare to FacebookShare to Pinterest

10am update - opening sharp declines, but...

US equities open sharply lower.. but well above the levels that the futures/index ETFs were suggesting (SPY was offering sp -52pts @ 1869). VIX opens higher, but the opening hourly black-fail candle is a major problem for the equity bears. 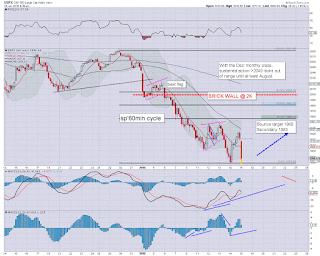 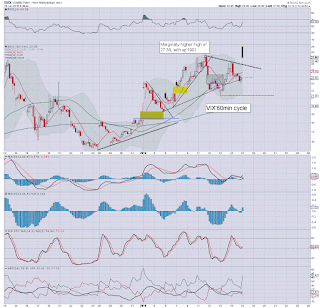 A VERY long day ahead.

First...   I'm not expecting a crash today, but unless there is some miracle recovery across today...  the equity bulls are in dire trouble of a Tuesday drop to sp'1750/25 zone - where there are multiple aspects of support.

Across many charts, the 1750/25 zone would make for an initial floor... the following is one to be aware of... 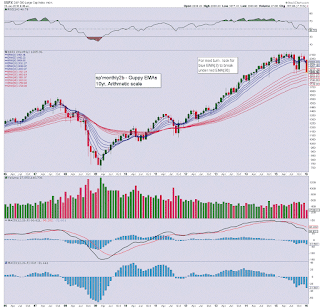 
What am I doing?

With a 3 day weekend ahead, I'm not in the mood to chase lower at these levels.

Its frustrating... but it could be worse.. I could be heavy long on margin.

time for some sun... back soon
Posted by Trading Sunset at 14:50:00
Email ThisBlogThis!Share to TwitterShare to FacebookShare to Pinterest 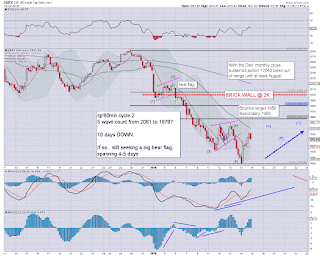 Q. why the big overnight drop?

1. Oil is clearly a problem, as it remains vulnerable to cooling to next support in the $25s.
2. INTC results were okay, but the outlook is not great
3. Overnight Asia/EU action... broadly weak
4. OPEX... ahead of a long 3 day weekend, the 'rats want to close out'.
-

Yesterday mornings price action was highly indicative of a short term floor, so unless 1878 is broken under today, the near term outlook will not change.

Again, it remains the case that anyone trying to play the bounces is going to be at high risk to an overnight snap lower.  The default trade remains to the short side.

awaiting a truck load of data...

8.04am... Citi (C) and Wells Fargo (WFC) results were a touch about expectations.

Were it not for tech and the momo stocks, this market sure wouldn't have made it >2K
-

Window is wide open to 1750/25... not today... but next week it sure is viable.
Posted by Trading Sunset at 12:42:00
Email ThisBlogThis!Share to TwitterShare to FacebookShare to Pinterest

US equity indexes have seen a clear short term floor of sp'1878, already rebounding into the 1930s. The fib' retrace/bounce zone of 1956/80 looks highly probable, along with VIX cooling back under the 20 threshold. However, the broader outlook remains absolutely bearish... as in ABSOLUTELY. 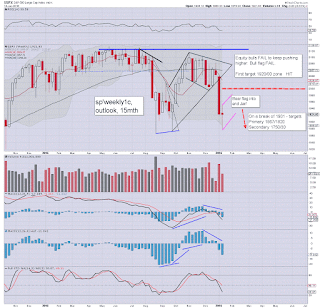 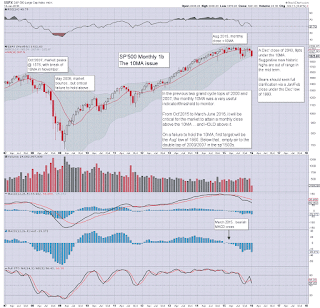 I shall highlight the monthly cycle again, to note that until the bulls attain a monthly close back above the monthly 10MA (currently @ 2037), they have nothing to be pleased about.

As it is, a second consecutive net monthly decline looks a given, and that will further clarify that a bearish spring/early summer is ahead.


re: weekly cycle - bear flag. If you consider that this week will close at least moderately net positive, with another net gain next week, but with equities likely to unravel again, no later than FOMC week.

Right now, a break under this mornings low of sp'1878 looks viable in the first half of February.
-

The week concludes with a truck load of data...

*a trio of Fed officials are set to appear, most notable.. Dudley

It is also important to note it is OPEX, so expect increasing chop into the weekly close. Further, because next Monday is CLOSED, there will likely be increased volume as some traders (long and short) wish to close out ahead of a 3 day weekend.
-- 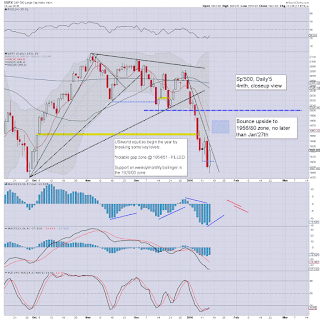 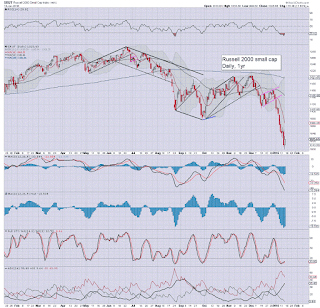 Suffice to add, opening shaky gains, but then building solid gains into the mid afternoon. There was a touch of cooling in the closing hour, but further gains look due into next week.