With the main indexes closing a little higher, the VIX slipped a little lower by 1.8% to 15.43. 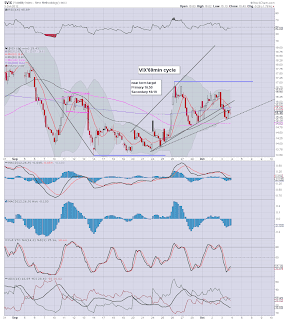 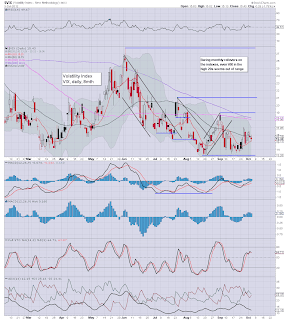 The VIX remains very low, and as I keep highlighting, a VIX under 20* is just not that reliable. Today's moves were arguably all noise.

The hourly MACD cycle certainly offers good VIX upside tomorrow, but the daily cycle is now starting to tick lower. As ever, the bigger cycles out-gun the little ones.

Those bears - myself included, seeking sp'1420/15 within the next few days, will need a VIX of 18/19. That still seems possible by the Friday close, but its going to take 'something' to upset this market, and Mr Market still seems quiet capable of ignoring most of the underlying troubling econ-data.

We do have the big monthly jobs data on Friday. Could that really be enough to whack the market down 2%? With QE3 now announced, a bad jobs number would surely have to be reflected with a bad market day?

---
*a VIX weekly close >20, remains my third 'red flag for Octobe' that I am seeking.
Posted by Trading Sunset at 22:30:00
Email ThisBlogThis!Share to TwitterShare to FacebookShare to Pinterest

Despite retreating back from the edge of a bullish breakout, today has to be seen as another disappointment for the bears. Whilst Oil slumps, and a major Dow constituent (HPQ) crashes, the broader market held together, and the VIX closed lower. 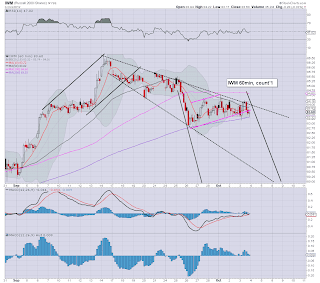 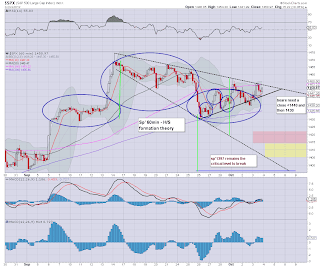 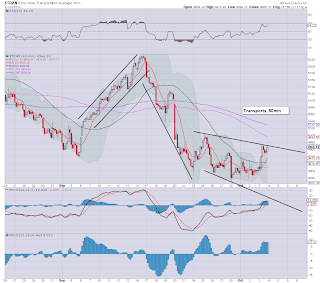 The hourly MACD cycle certainly offers downside for tomorrow, but considering the price action today, I just don't feel at all confident of even hitting 1420.

With the earlier flirtation on the edge of a major breakout, the indexes are again starting a new down cycle. The VIX remains marginally red, but that could certainly closea few percent higher. 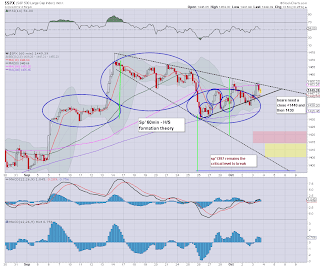 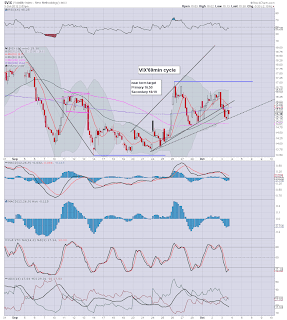 So, after the sp'1454 trendline hit, we seem to have indeed seen a failed attempt to breakout.

An important closing hour for the bears.

A red close on the majority of indexes will be important. Something around sp'1441/43 would suffice, it would at least help setup tomorrow for yet another try at breaking into the 1430s.

*the lower channel is suggesting sp'1400 - as early as Friday, yet just seems too bold a move, we've not seen that kind of move in a long while. A more reasonable target remains 1420.

**ohh, and the action in HPQ, hillarious. More on that later..on my fair value page.

More after the close.
Posted by Trading Sunset at 19:54:00
Email ThisBlogThis!Share to TwitterShare to FacebookShare to Pinterest

It remains a tense situation, yet, at least it ain't boring! 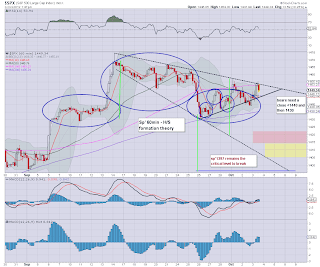 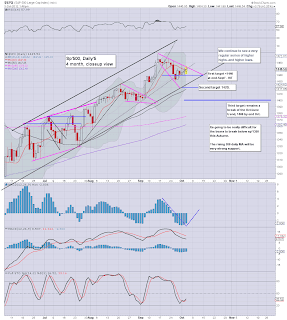 Bears MUST see a close under that upper channel on the hourly chart, otherwise new highs very likely within a week.

It remains a very edgy situation...

back at 3pm
Posted by Trading Sunset at 18:48:00
Email ThisBlogThis!Share to TwitterShare to FacebookShare to Pinterest

Market is on the edge of a major breakout. A close over sp'1455 arguably wrecks any hopes of further downside, and then we would probably exceed the recent 1474 high.

Either the market starts to weaken here..or the bears are toast...again. 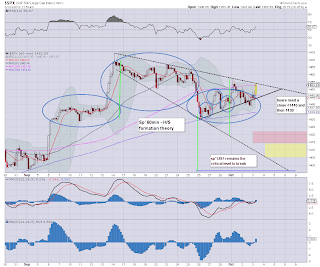 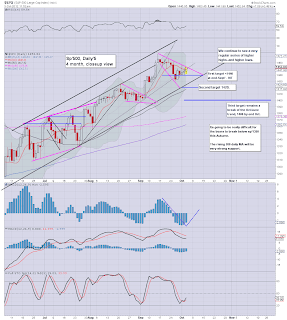 The levels are clear, we're sitting right on the borderline.

It remains a 5 day bear flag on the daily charts, but if we close >1455, its surely a win for the bulls.

I remain short, and need some painkillers..or..something..urghhh.

time for lunch.
Posted by Trading Sunset at 16:55:00
Email ThisBlogThis!Share to TwitterShare to FacebookShare to Pinterest

Good morning. Market opens a touch higher, but its not exactly soaring after the ADP jobs data - which came in 'reasonable' I guess.

*awaiting ISM non-manu' data at 10am. 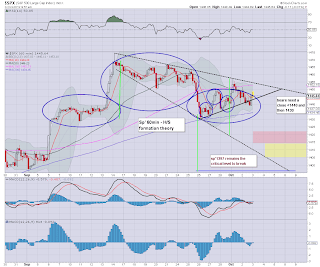 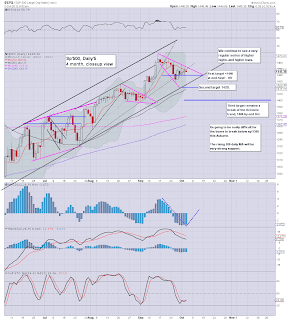 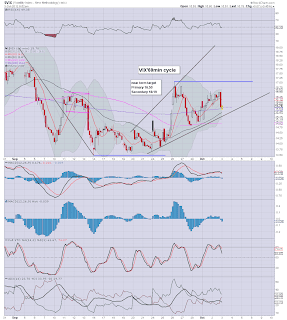 Considering the larger H/S formation on the hourly chart, and the bear flag on the daily index charts, I'm still guessing we break into the 1420s before we see the 1460s again.

Posted by Trading Sunset at 14:54:00
Email ThisBlogThis!Share to TwitterShare to FacebookShare to Pinterest

Commodities and their related stocks

With the announcement of QE3, a lot of uncertainty has been taken away. I think just about everyone - maybe even the Ben Bernanke were getting tired of waiting. So, with QE3 announced we saw a brief spike higher in mid-September, but since then, we're starting to slide. 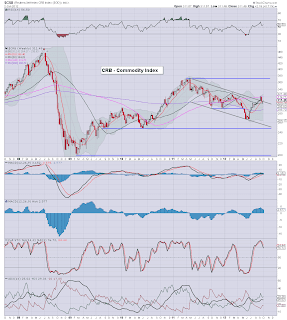 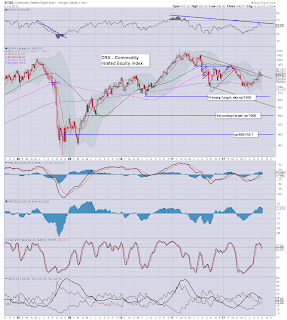 With the fed now buying $40bn of MBS a month, and due to launch $45bn of (unsterilised) long dated T-bonds in January, we certainly have to consider the issue of 'is this inflationary?'

For the moment, I'd say most certainly..no. Two reasons, first, the velocity of money is still falling, and so long as this is the case, even if the new money does leave the banking system into the hands of the sheep, it moves around so slowly as to not be inflationary.

see: link for data on velocity of money

The second reason why I believe the 'new money created from nothing' is not yet inflationary, is that the banks are still hoarding the digital dollars. There is no doubt bank lending is still relatively muted -relative to their cash reserves, and along with other general corporate balance sheets, there is a huge amount of cash out there, but it ain't being spent!

So, for the moment, we have a lot of new money being created, but its just not filtering out there to the dumb ignorant sheep. So long as that remains the case, I don't see any general 'rampant' inflation as likely any time soon. I'm not saying there isn't any inflation out there, but in the bigger picture, we sure aren't seeing the hyper-inflation that some have been touting since the Fed started QE. This general deflationary view is especially the case when you consider that house prices and the general economy are still weak.


A special reminder on WTIC Oil

WTIC Oil remains my second red flag warning I am waiting to see achieved this month. I am seeking a weekly close <$90 sometime within the next few weeks, I think that is pretty likely, especially when you consider the underlying MACD cycle, which is due to go negative cycle no later than the end of next week. 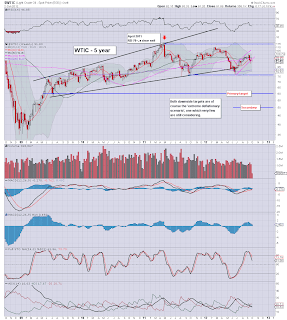 Those looking for a late 2012/early 2013 deflationary wave - both in equities and commodities, need only look to the Oil charts. WTIC is looking very weak, and I'm most definitely looking for a weekly close <90 within the next 2 or 3 weeks.

As for Wednesday. We have ADP jobs data, and ISM non-manufacturing data. Both could easily be used as an excuse to rally..or drop hard. Its really hard to guess lately, but what I do know is that the daily charts are sporting some very clear bear flags - now 5 days long, and we're still set for a test of 1420/15 in the next few days.

The broader market closed broadly flat, although the indexes were acting a little more independently today, with the Dow and Tech leading the way lower earlier in the day.

The broader formation on the daily charts is a clear bear flag though, within what remains a very strong uptrend since the June low of sp'1266 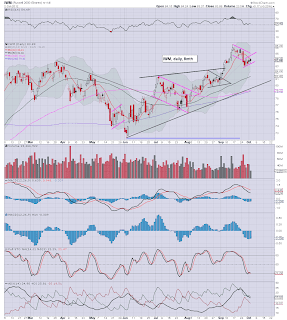 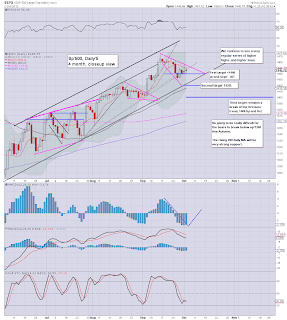 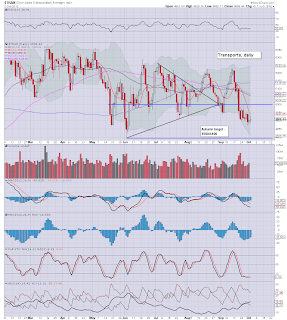 So, we saw the sp' break under 1440, but it sure didn't close under it, and that's often what matters more. The close was slightly bullish, and the bears should again be concerned about yet another higher open, the daily chart would allow 1455 tomorrow. Any action over 1460 would arguably break over the larger bull flag/pennant (pink), and would open up new index highs next week. Thats the concern anyway.

My best guess (and admittedly, also a 'hope'), is that we still break the bear flag to the downside, and at least hit 1420/15 by the Friday close. From there, I'd guess we jump higher into next week, perhaps on more hope/annoucement of a Spanish bailout request.