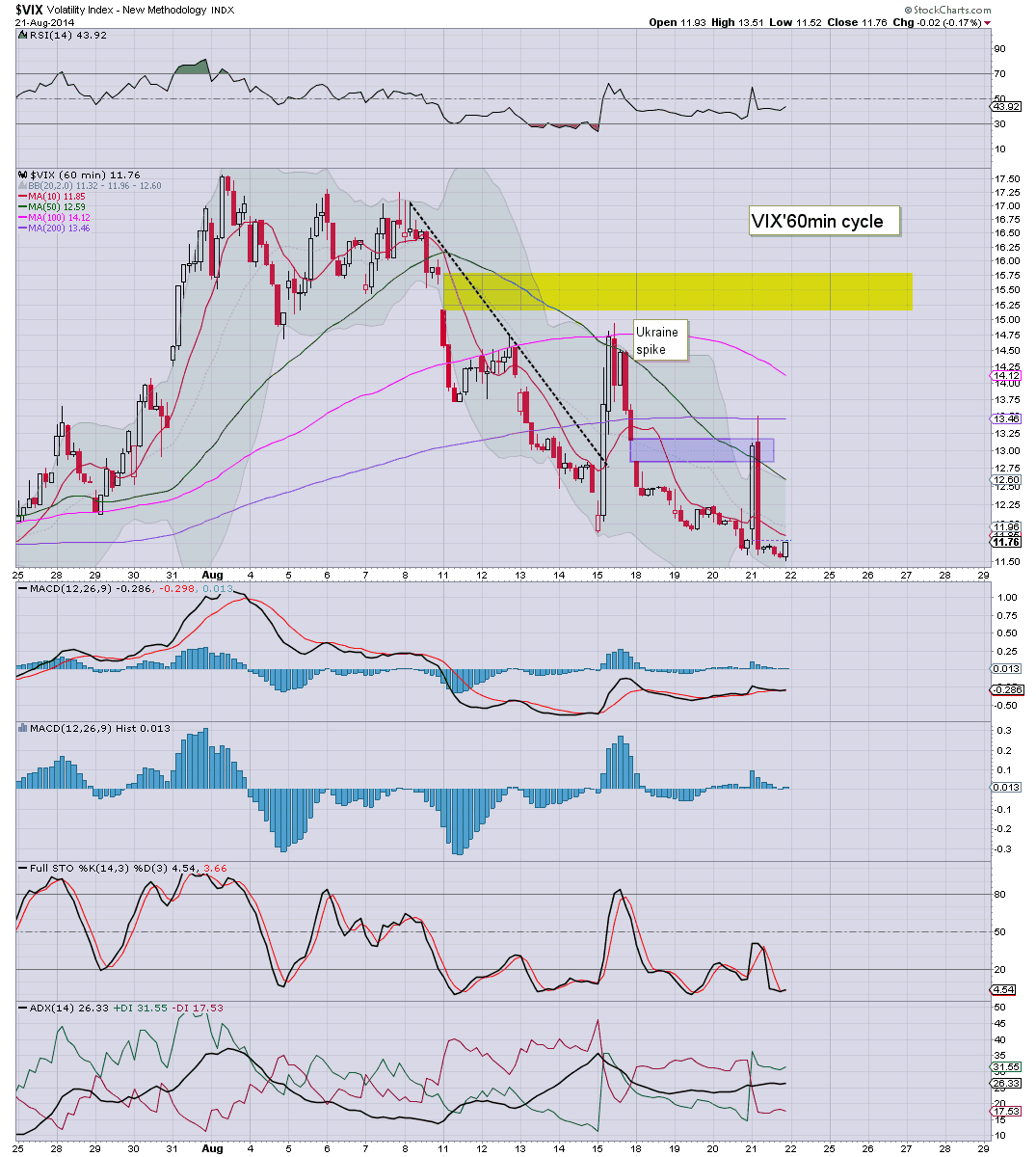 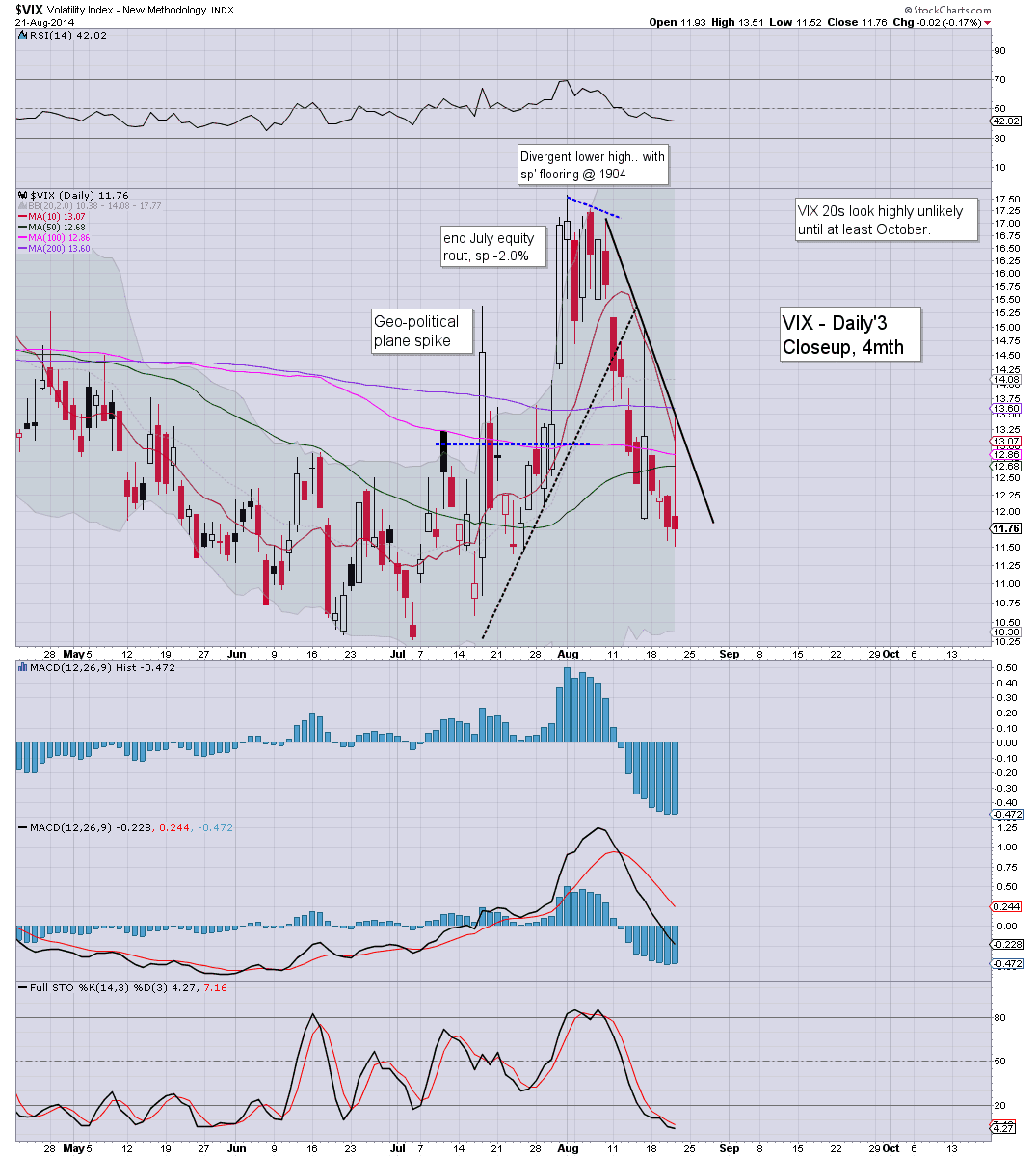 I'm not sure what to make of the first 30 minutes of VIX trading. I'm sure someone out there has a valid explanation.... I wish I knew. It is interesting that we got stuck right at the descending trend - see daily chart.

VIX looks set to remain low for another few weeks. The upper price gap zone in the 15s remains a viable target on any 2-3 day equity sell down.

The big VIX 20 threshold looks very unlikely to be hit until at least October.
-- 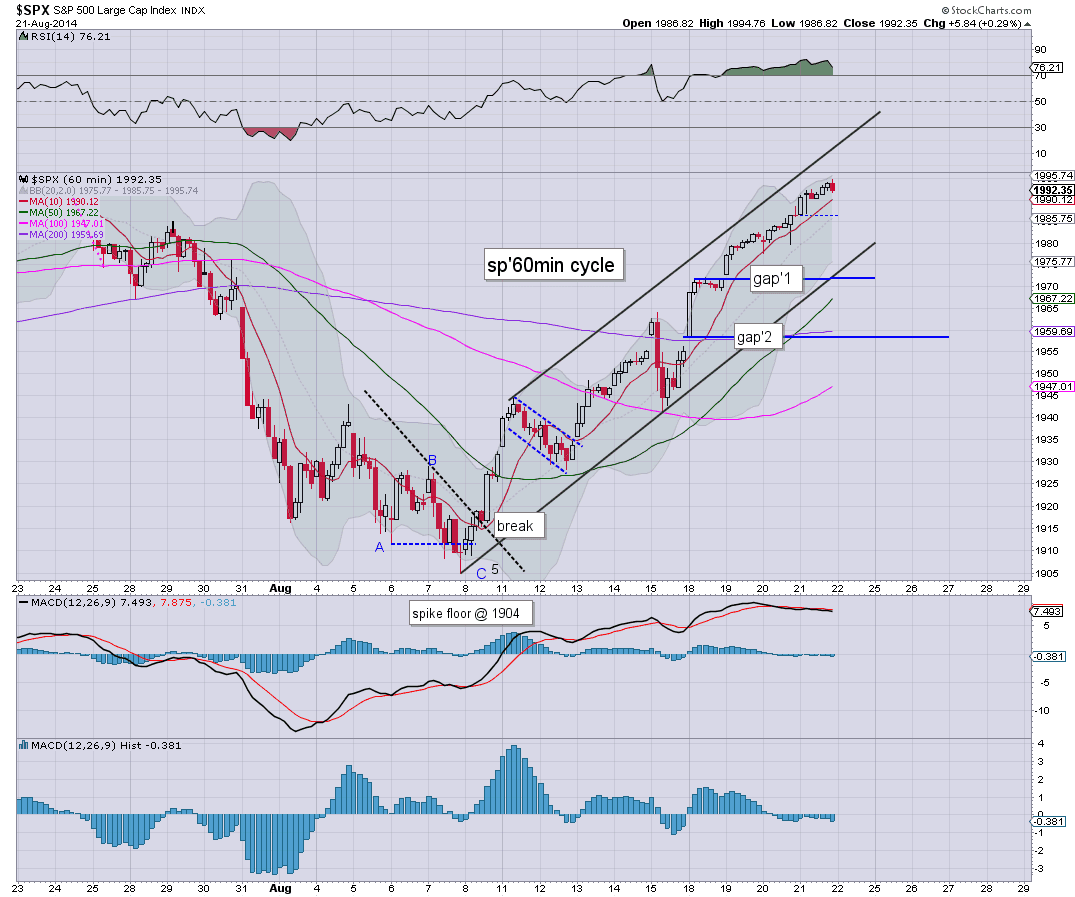 So... another up day.. and what was especially impressive was seeing the R2K rebound from a morning low of -1.0%. The closing daily candle on the R2K was a clear spike floor, and bodes strongly for the bulls tomorrow..and into next week.

*I remain content on the sidelines. I'm not interested in going long at these levels, but certainly... have ZERO interest in attempting any index shorts until 2030/50.

US equities look set to close higher for the 8th day of 10. With a notable strong rebound in the R2K today, it bodes strongly for the equity bulls tomorrow. Sp'2000s look set to be hit, with 2010/20s by late August. 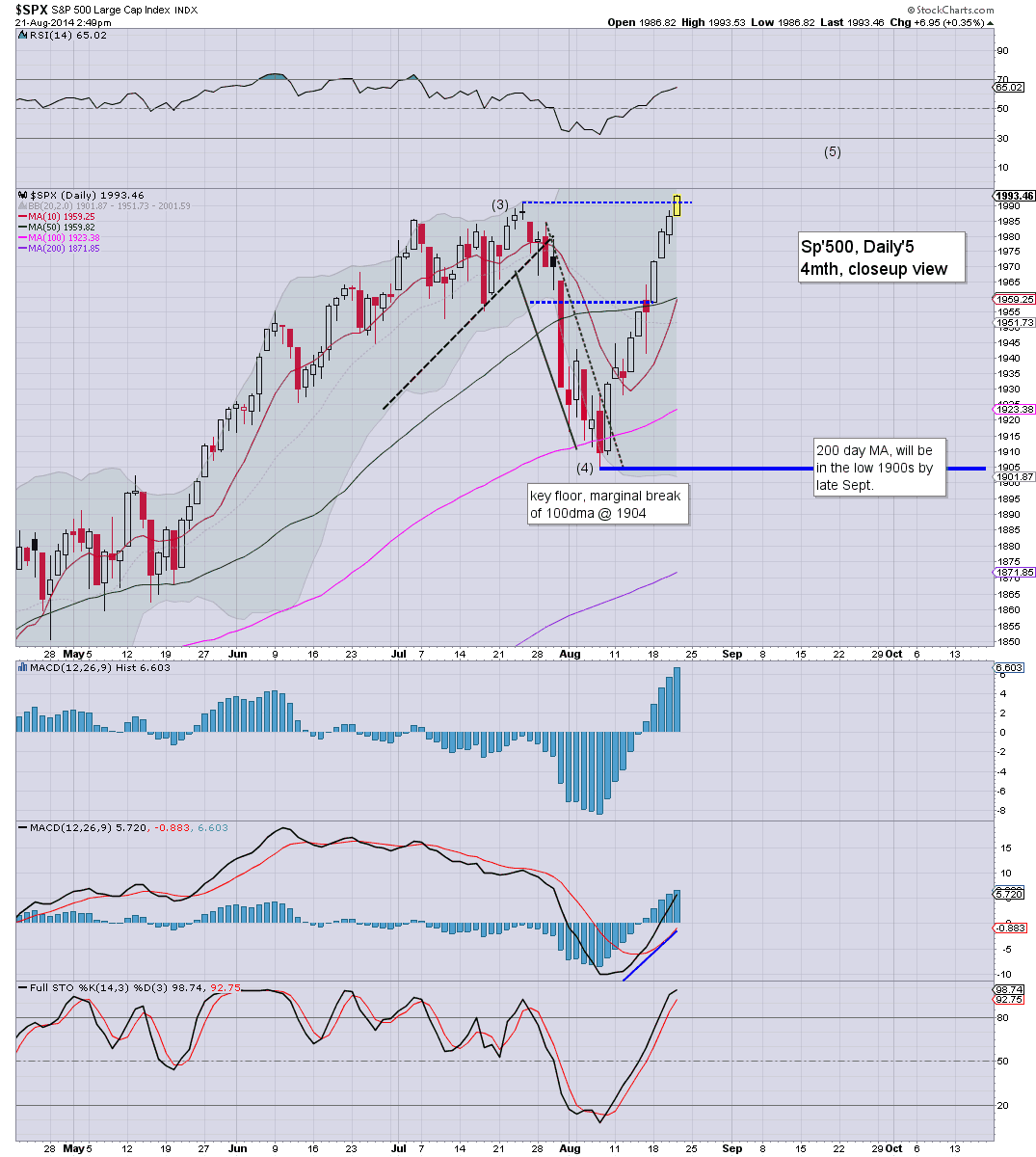 *Dow is now higher by 400pts this week... the strongest weekly gain since early April.
-

I do not expect a reversal until next week.. and even then, we might only be looking at 1.5%...and that will be from a higher level than currently.

Here is a bonus special chart... *not the best of days for the gold bugs...with miner ETF of GDX -2.3%
Posted by Trading Sunset at 19:50:00
Email ThisBlogThis!Share to TwitterShare to FacebookShare to Pinterest

2pm update - another hour closer to the hole 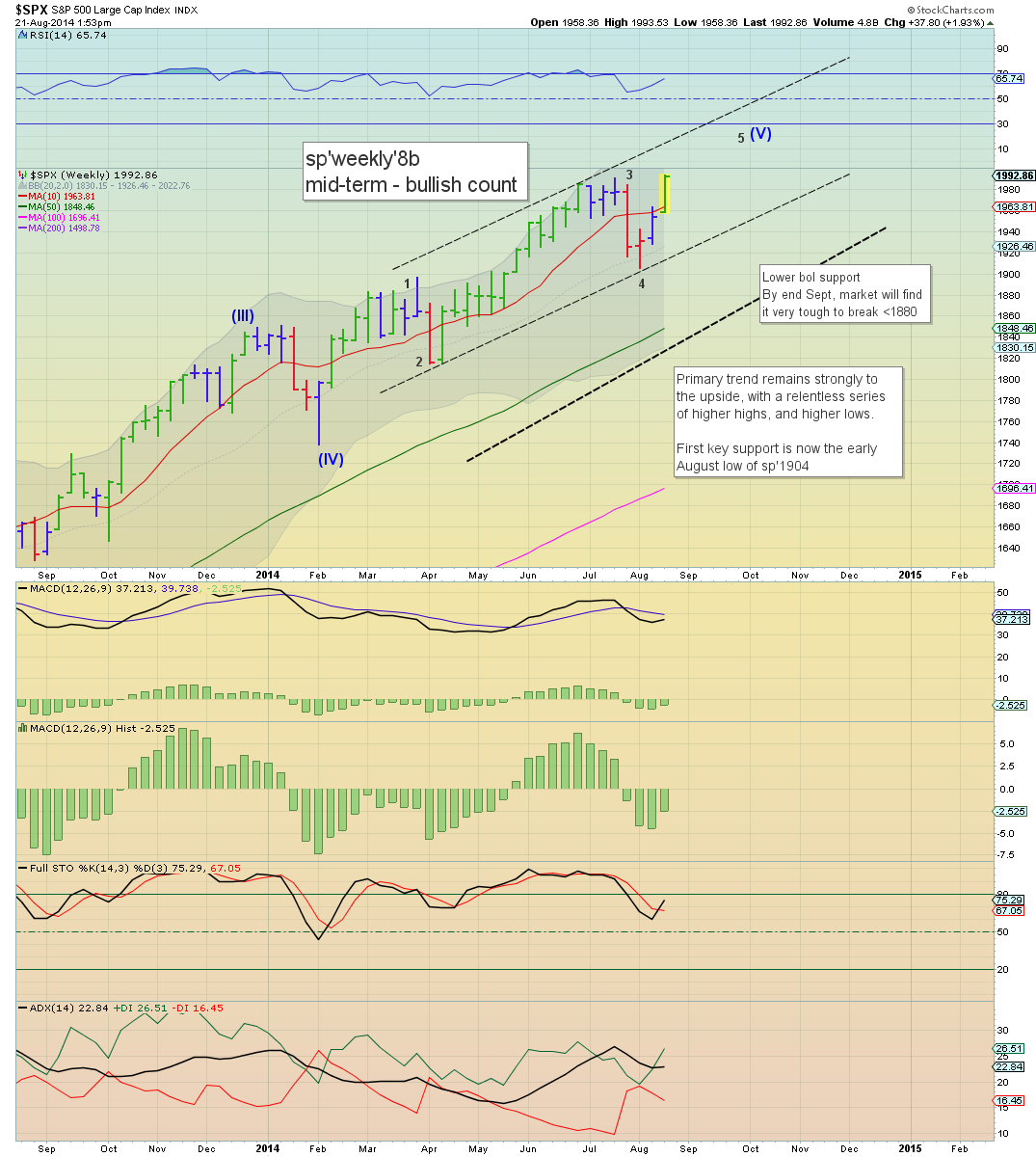 Little to add, on what is just another day in crazy land.

Sleepy August... low volume..and we all know that favours the bulls, right?

--
As for Yellen at Jackson Hole tomorrow morning (the nonsense starts at 10am)... we'll surely break into the 2000s.. and melt higher into the weekend.

As ever...I've my eyes more on the weekly charts than anything.

Whilst the broader market is holding moderate gains, there is a notable rebound in the R2K, which makes for a rather powerful spike floor just above the 200 day MA. Upside to 1190/1200 looks viable by mid September. 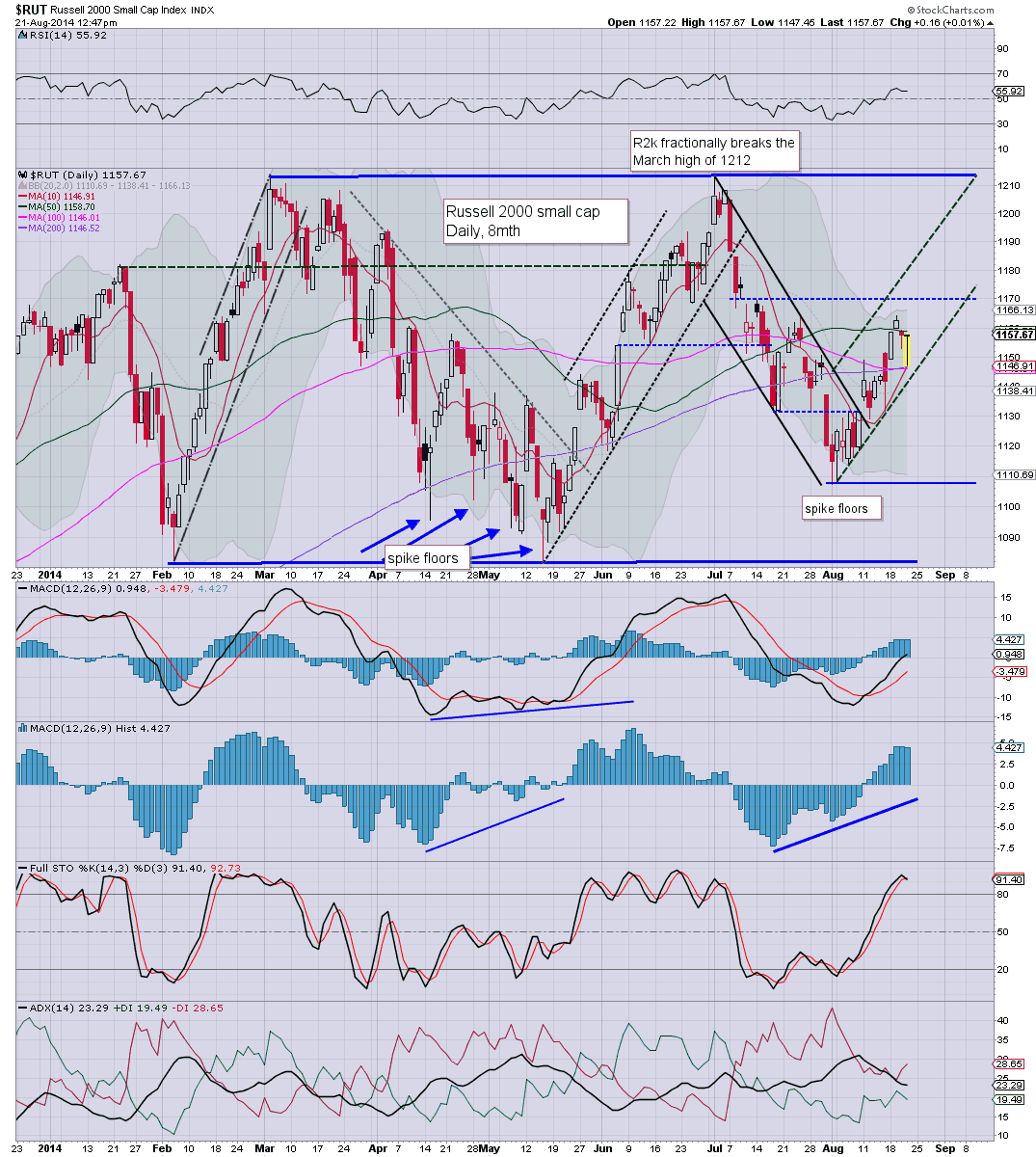 The current daily candle in the R2K is a powerfully bullish one, and bodes strongly in favour of the bulls tomorrow.

Posted by Trading Sunset at 17:49:00
Email ThisBlogThis!Share to TwitterShare to FacebookShare to Pinterest

12pm update - climbing ahead of the hole

US equities are generally holding moderate gains, with the sp'500 breaking a new historic high of 1992. Significant early weakness in the R2K has been largely reversed, and looks set to close flat/slightly higher. Metals remain weak, Gold -$14 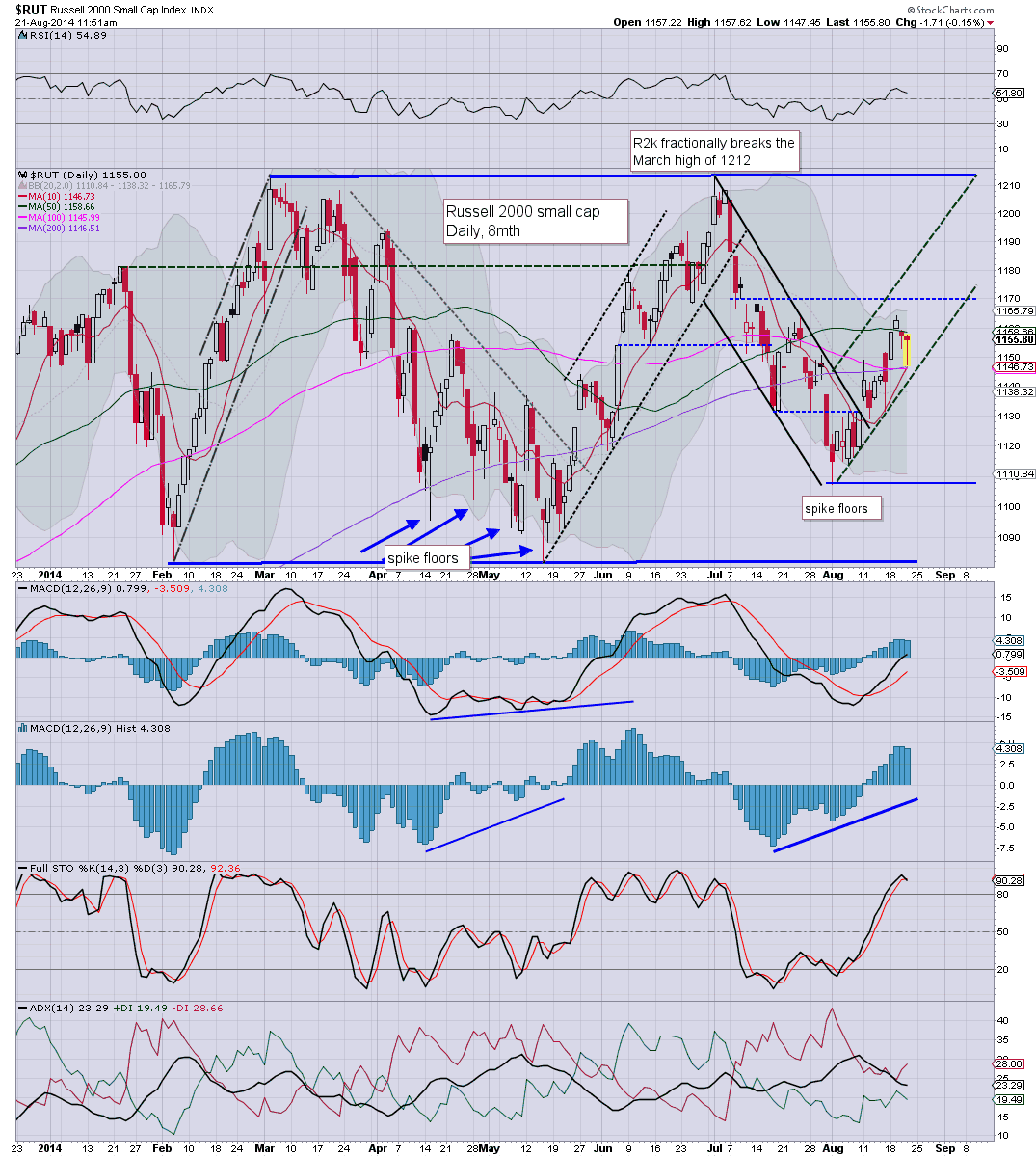 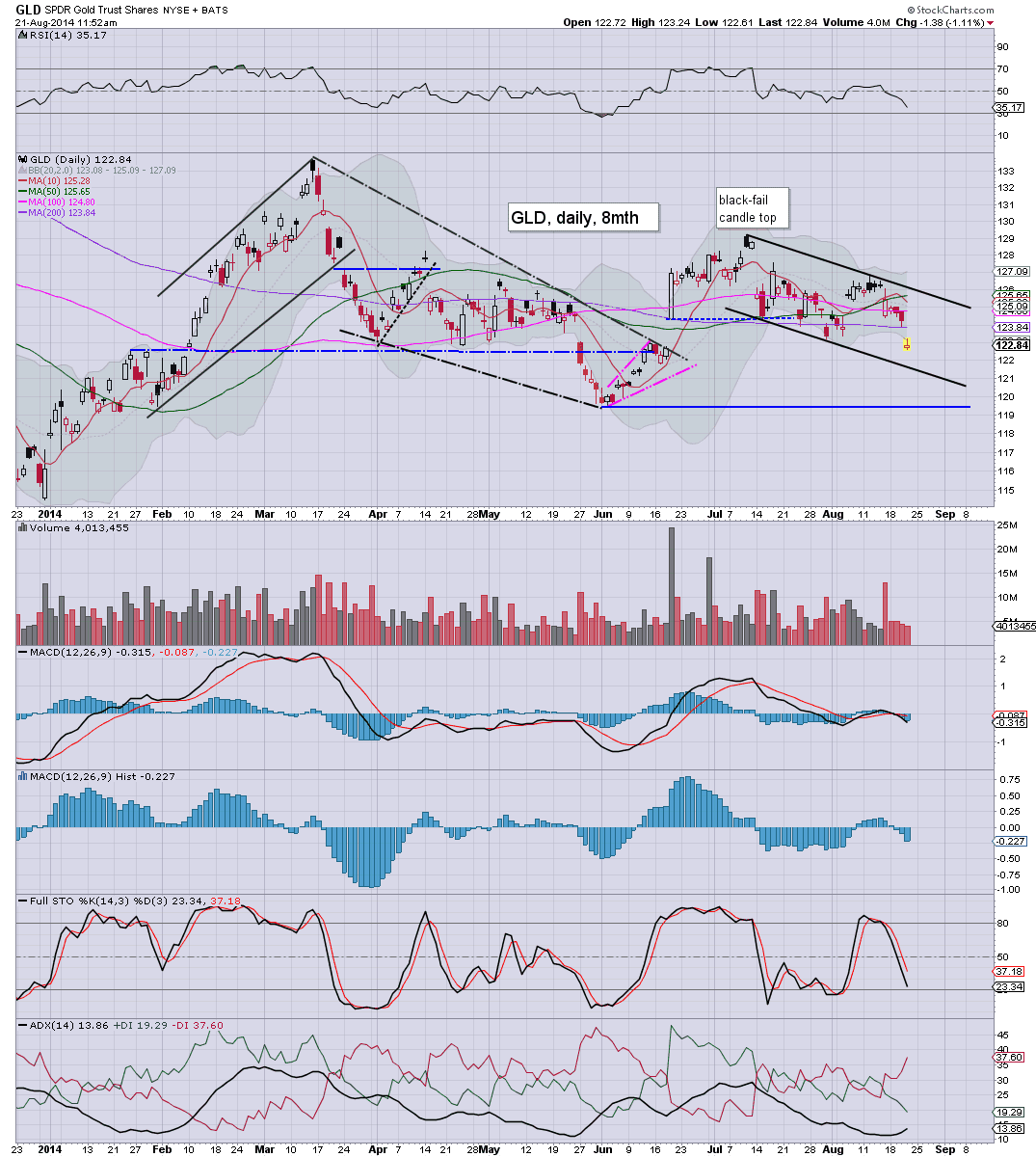 So...the inexorable climb continues, and there is little doubt that this mornings QE fuel (if only 1.5/2.0bn) is helping.

The early twitchy price action in the VIX remains an anomaly.. I've not seen anyone else mention it yet.
- 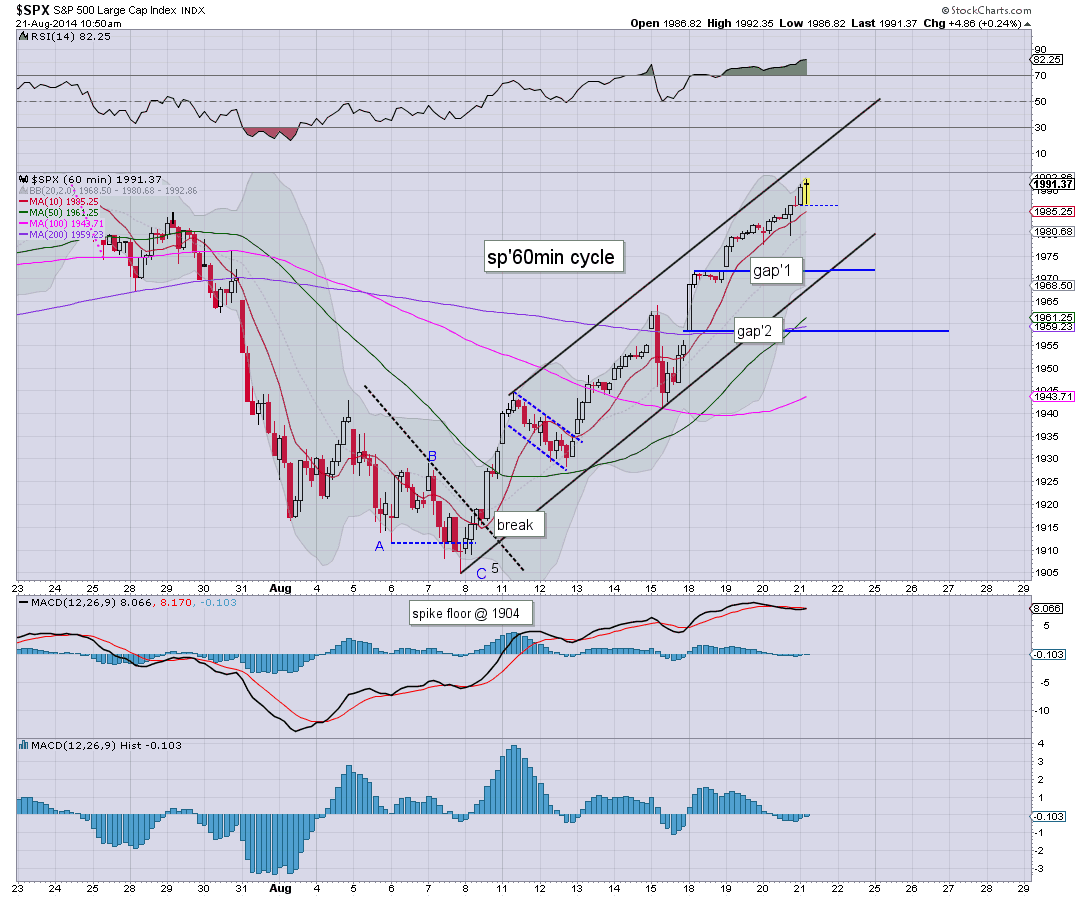 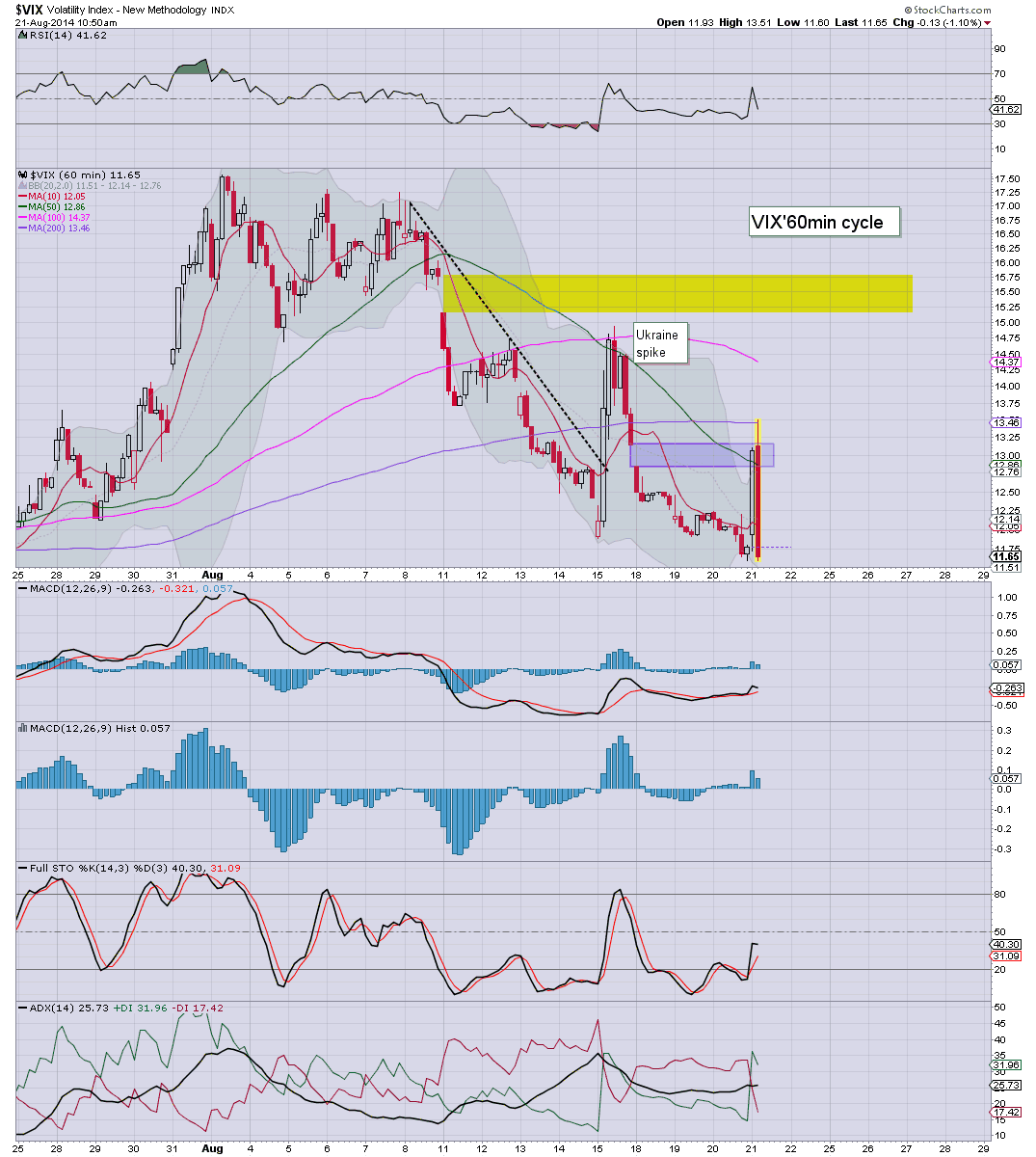 So..what to make of this?

Overall... yes, there are some signs of weakness - via the two leaders (Trans/R2K).. but the overall market still broadly on the rise.

The fact the VIX is again back to red should not excite the bears about tomorrow.
Posted by Trading Sunset at 15:52:00
Email ThisBlogThis!Share to TwitterShare to FacebookShare to Pinterest

US equities open a little higher, and a new historic high in the sp'500 looks likely in this hour. There is moderate weakness in the two leaders - Trans/R2K, and that is offering an early warning about post Jackson Hole weakness. 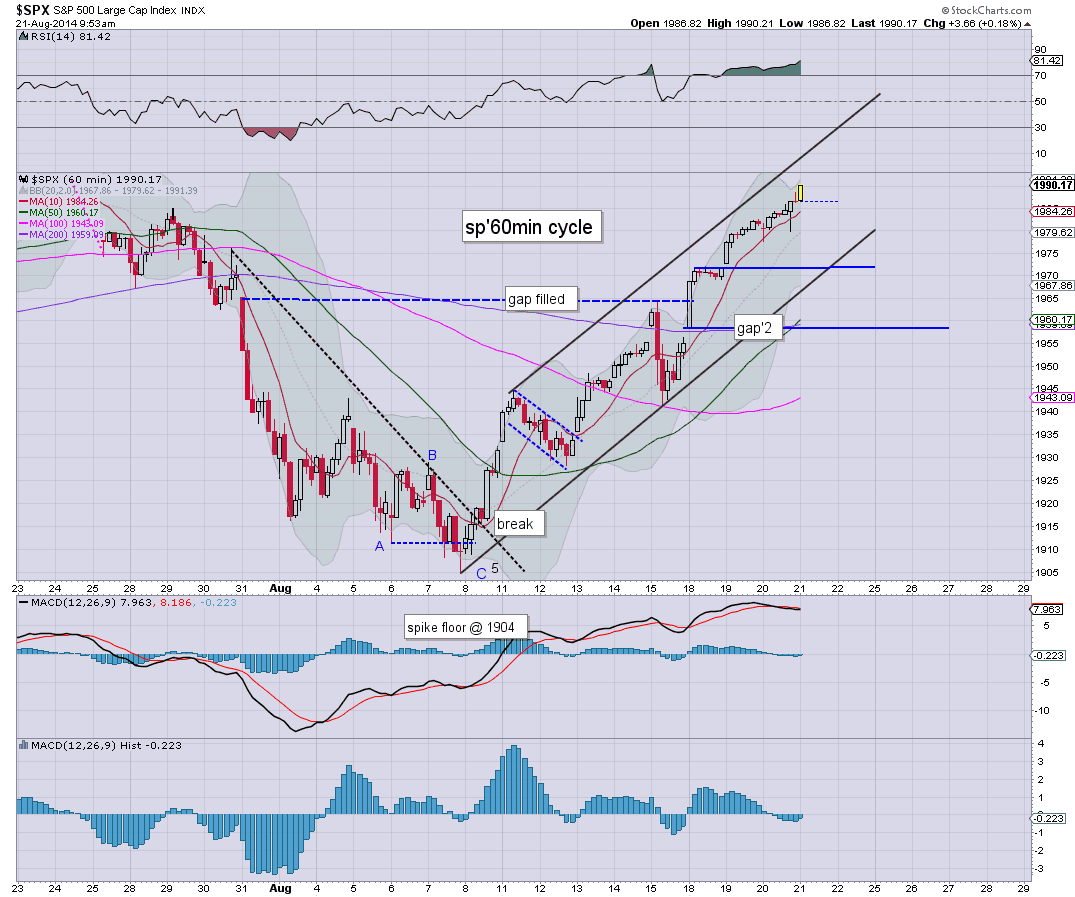 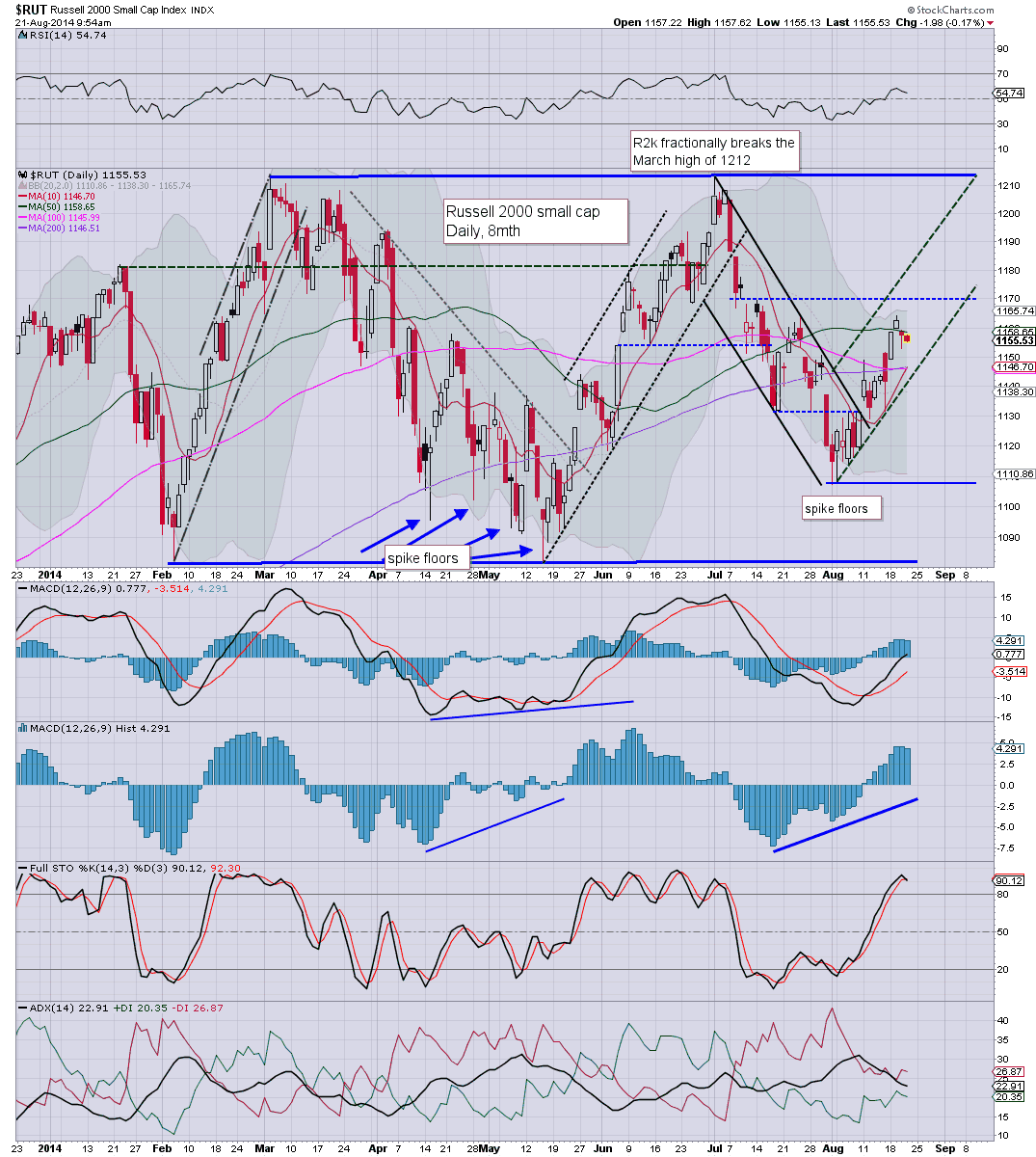 As even the maniacs on clown finance TV recognise, today the market will largely be in a holding pattern until tomorrow....where we have Yellen at the hole.

On any basis, it seems completely point to attempt any index shorts.. not least since we also have sig' QE this morning.
-- 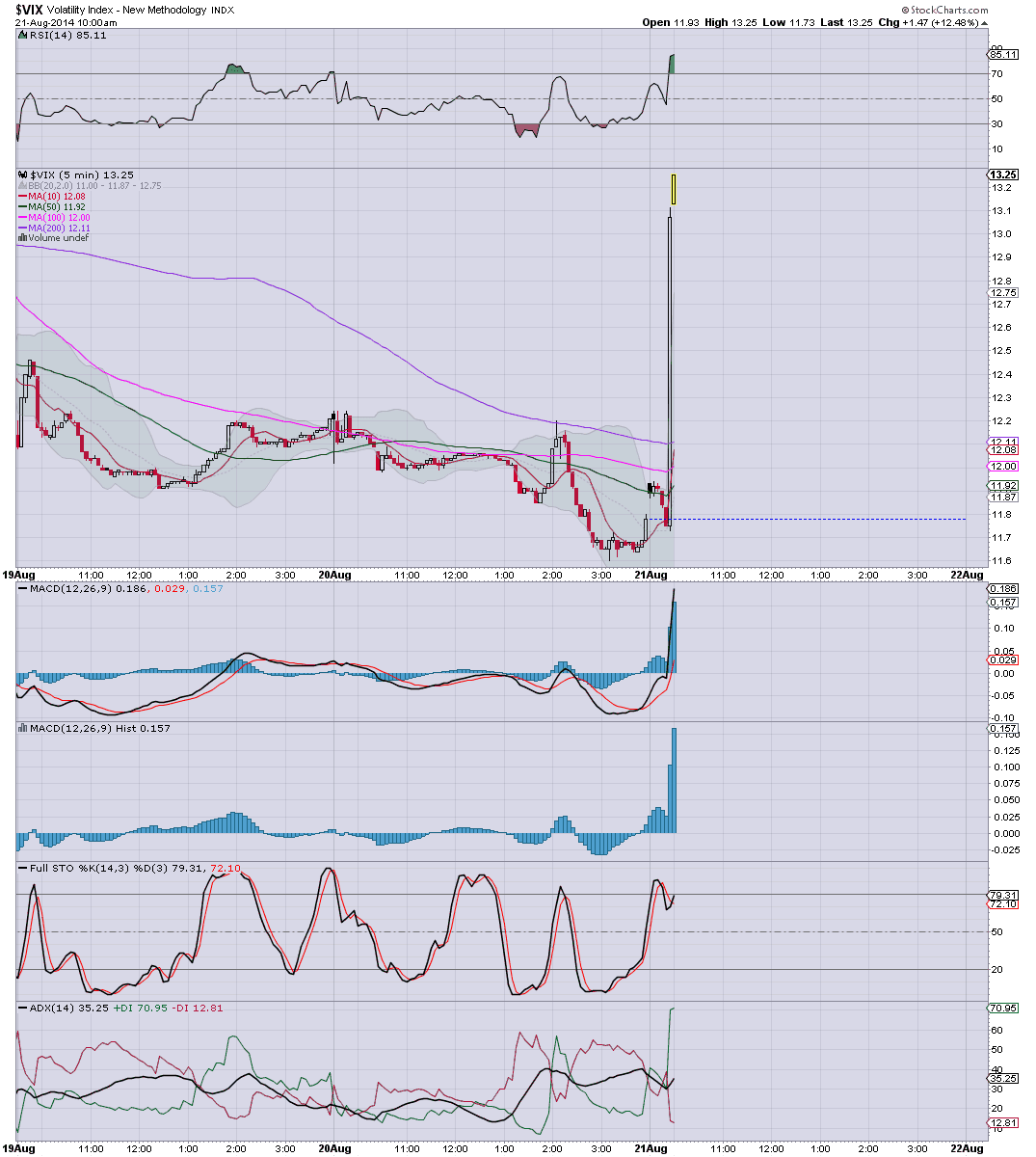 Eyes on that VIX !


10.11am... So.. a fractional new historic high in the sp'.. but the action in the VIX sure is makes for some curious action.

So... rest of the day...upward melt....ahead of Yellen.
Posted by Trading Sunset at 14:56:00
Email ThisBlogThis!Share to TwitterShare to FacebookShare to Pinterest

Good morning. Futures are moderately higher, sp +4pts, we're set to open at 1990. Metals are sharply lower, Gold -$15. Oil is weak, -0.5%. Near term price momentum continues to swing in favour of the bulls.. with broad equity upside into September. 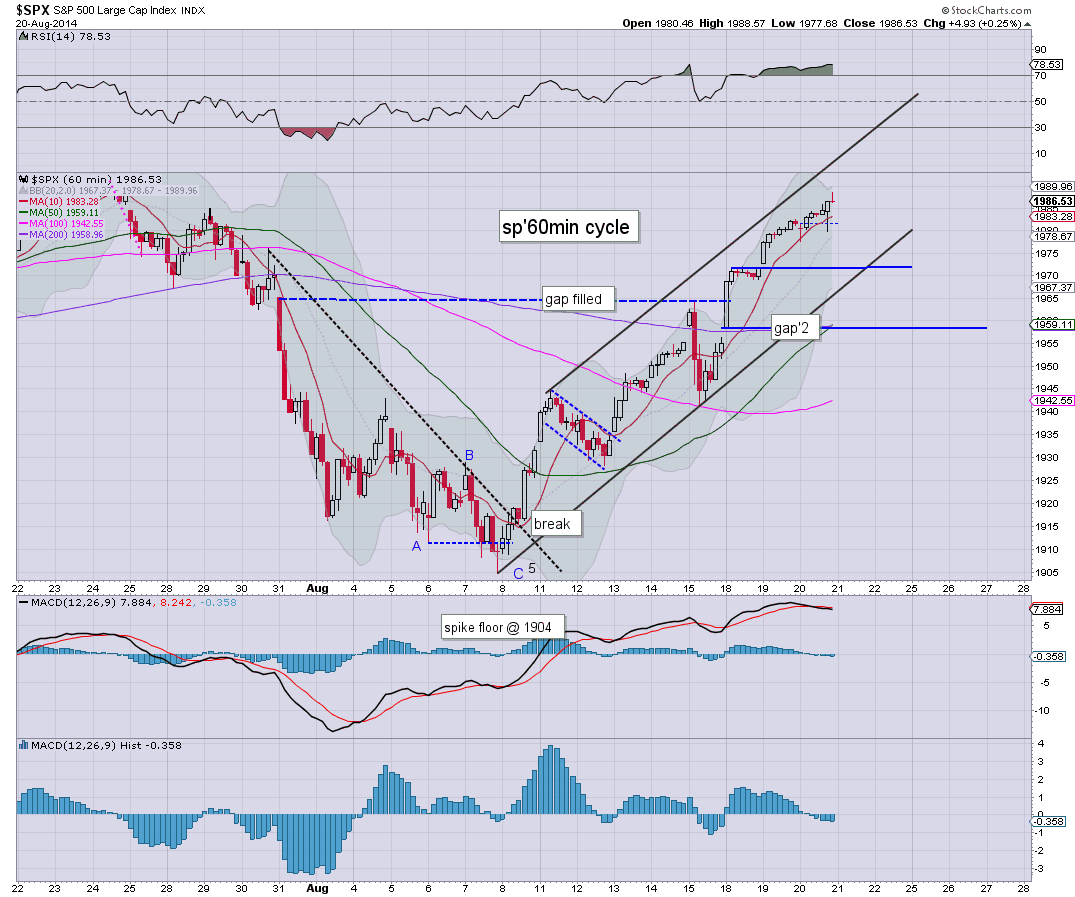 *awaiting an array of econ-data this morning.
--

So.. we're set to break a new historic high in the sp' this morning. Trans/Dow look likely to follow within days.

Equity bears should keep in mind there is QE-pomo of $1.5/2.0bn today.

Good wishes for Thursday trading!
Posted by Trading Sunset at 13:28:00
Email ThisBlogThis!Share to TwitterShare to FacebookShare to Pinterest

It was just another day for the US equity market, with most indexes continuing to climb. The Nasdaq Composite is now just 11% away from the March' 2000 high of 5132. However, that looks somewhat out of reach this year. 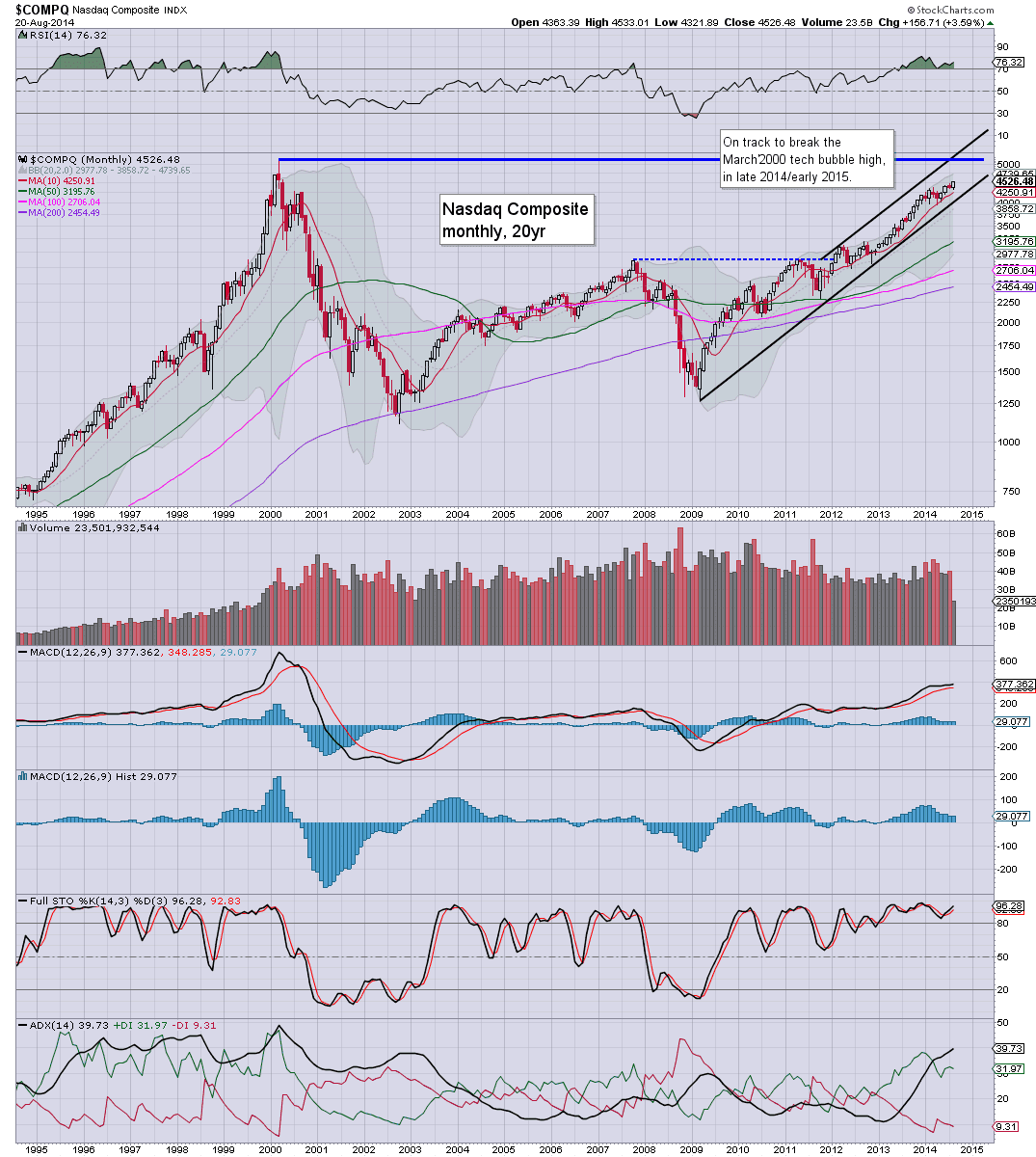 It is highly notable that despite all the minor geo-political scares in recent weeks, the Nasdaq is showing a net monthly gain for August of 3.6%. Considering the current price action, a monthly closing gain of 5% now looks very likely.

Upper bollinger is offering the 4700s in the immediate term, and certainly, that would be the target for mid/late September. The giant 5000 level looks difficult to hit this year, not least if the market does see some degree of down wave in late Sept/October.
--

So...another day higher, and it really is getting extremely tedious.. 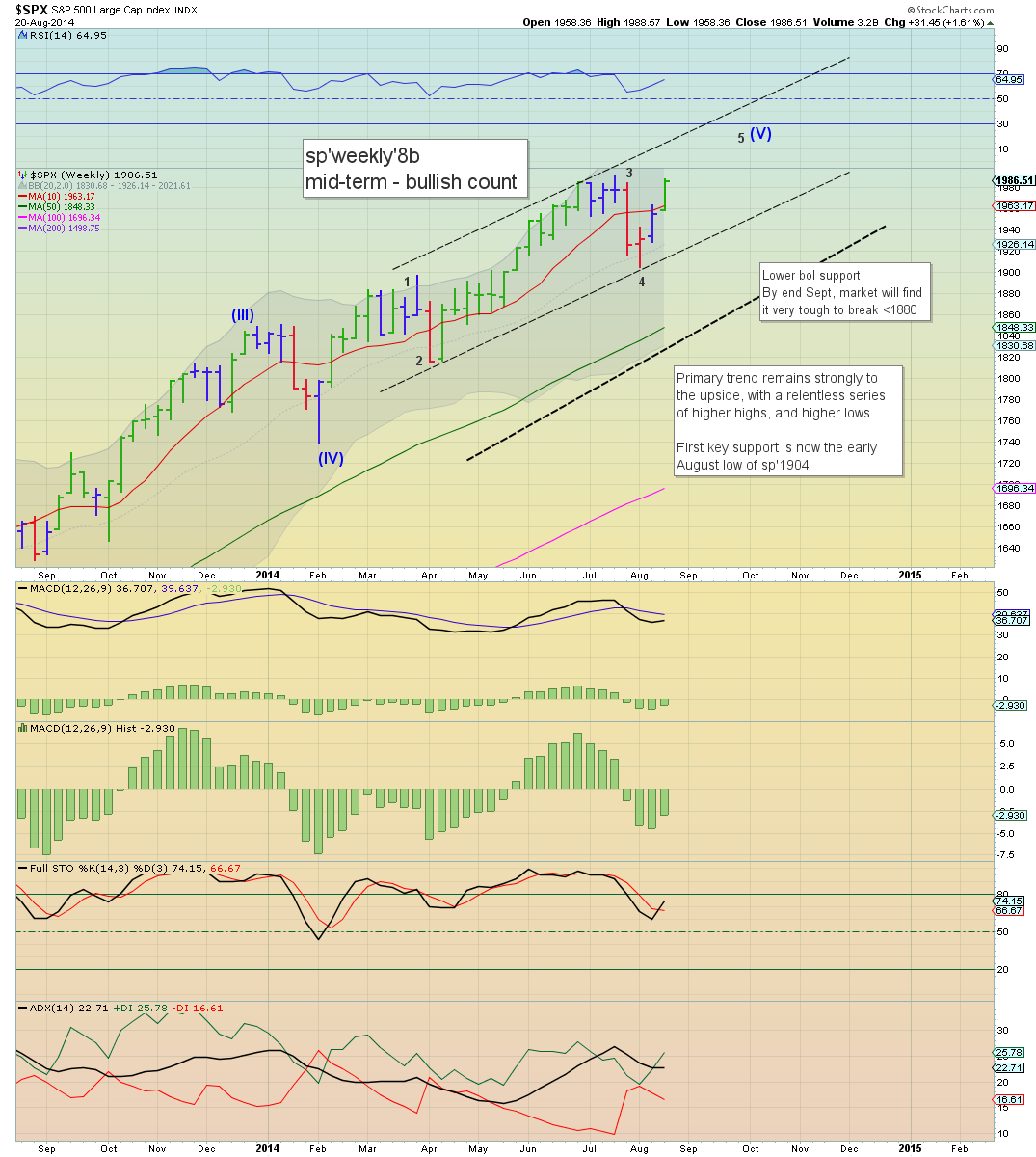 Best guess remains a key top in mid/late September, 2030/50 zone, but I'm seeing increasing talk of the 2100s again... and that does concern me a little. As things are, the current cycle should complete within 3-5 weeks.

The only issue is how far can it fall from there?  By late October, the lower weekly bol' will be around 1900, and that would be 'best bear case' in an initial down wave. I suppose some might even be seeking a H/S formation. In the meantime... I am more than content on the sidelines. 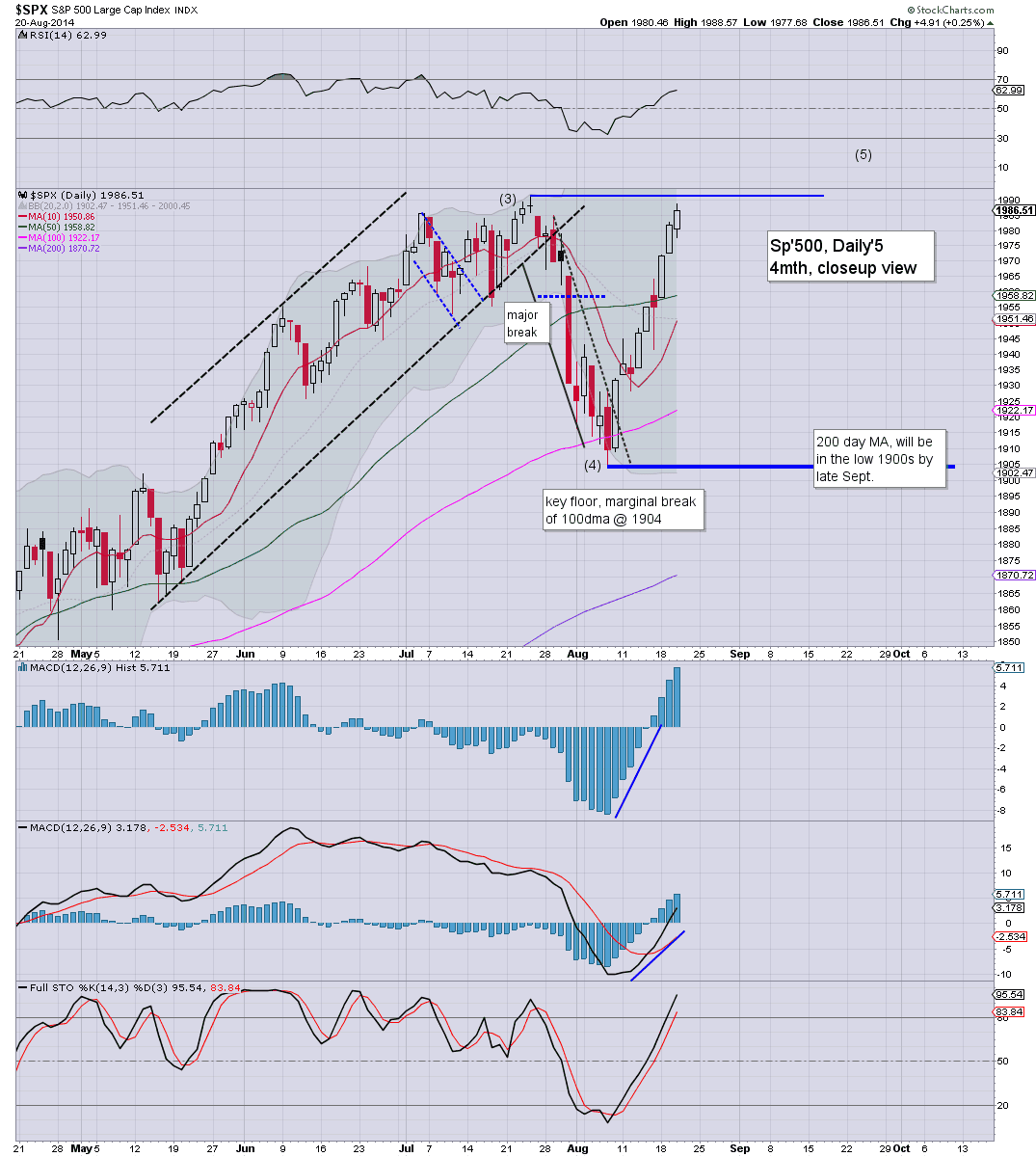 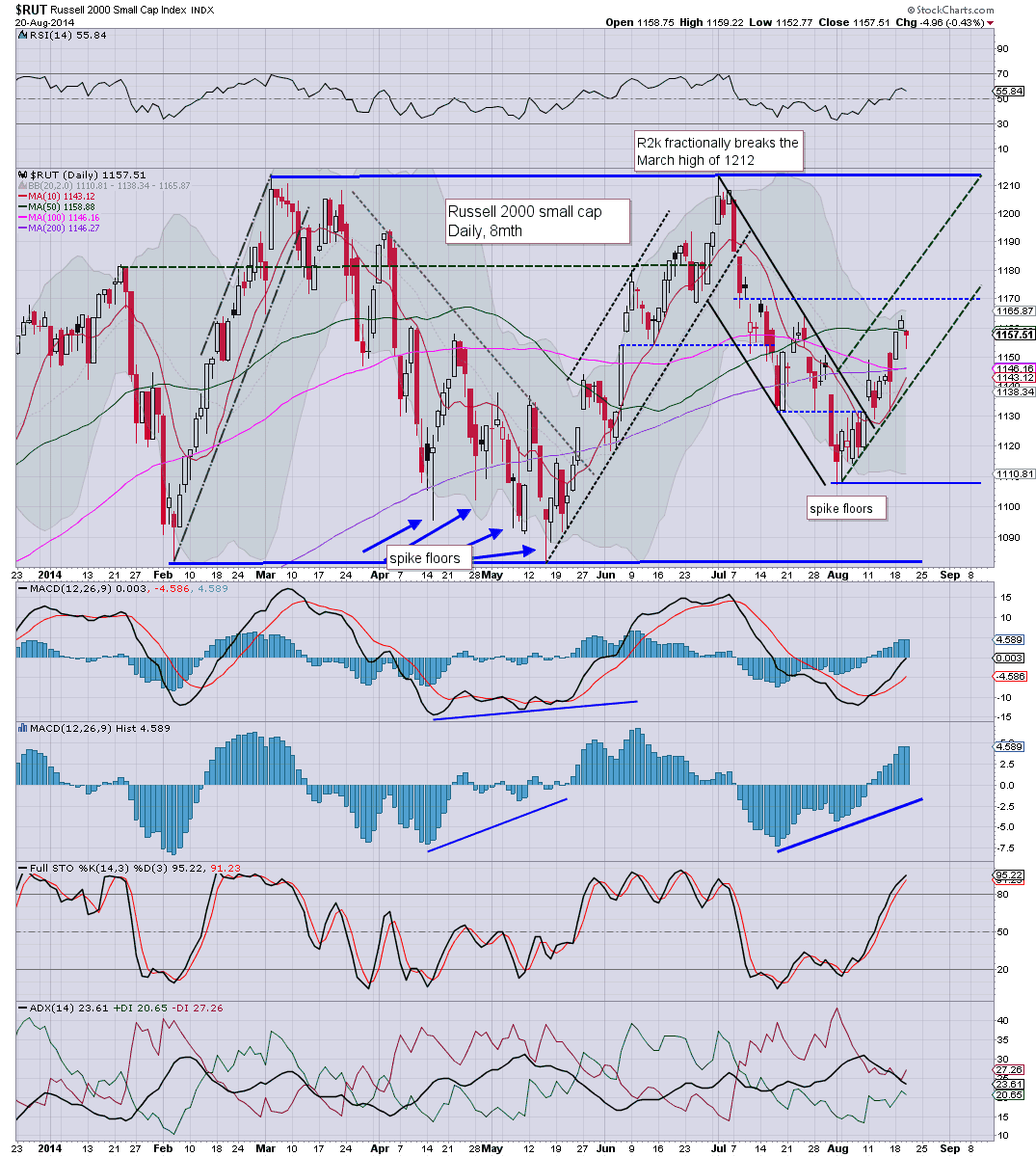 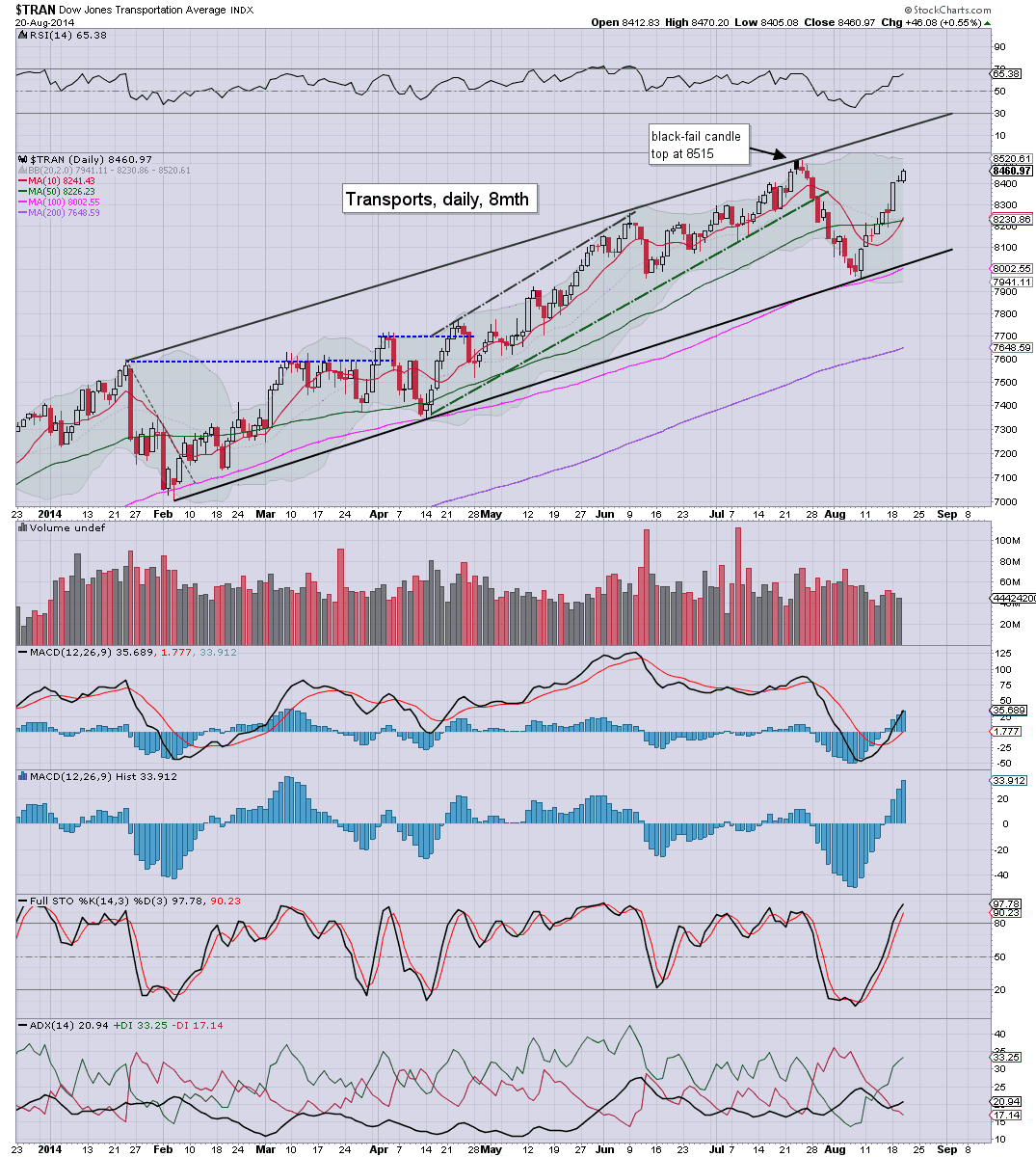 It was merely just another day for Mr Market, some minor chop, but with the usual underlying upward pressure.

Trans, Dow, SP' all look set to break new historic highs within the near term.
--