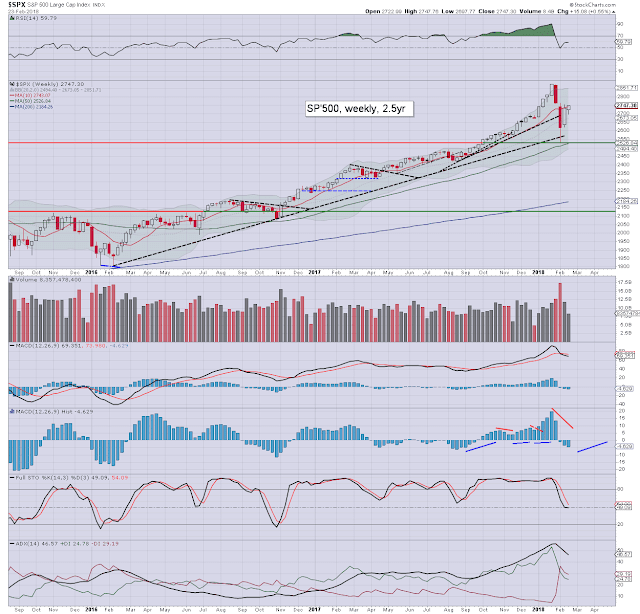 A second consecutive net weekly gain, settling +15pts (0.5%) at 2747, as the bears could only manage a minor retrace from 2754 to 2697. With s/t price structure of a bull flag provisionally confirmed, a return to the 2800s in March looks on the menu.

Best guess: climbing to the 2800s in March, with the 2950/3047 zone by mid year. The latter zone has multiple aspects of key resistance, which should see the market get seriously stuck. Its notable that sp'3K would make for a natural cycle peak. Considering the recent 11.8% retrace, the next down wave could be expected to be stronger, on the order of at least 15/20%. Again though, the subsequent rebound would likely be equally strong. The year end target of 3245 still appears on track. 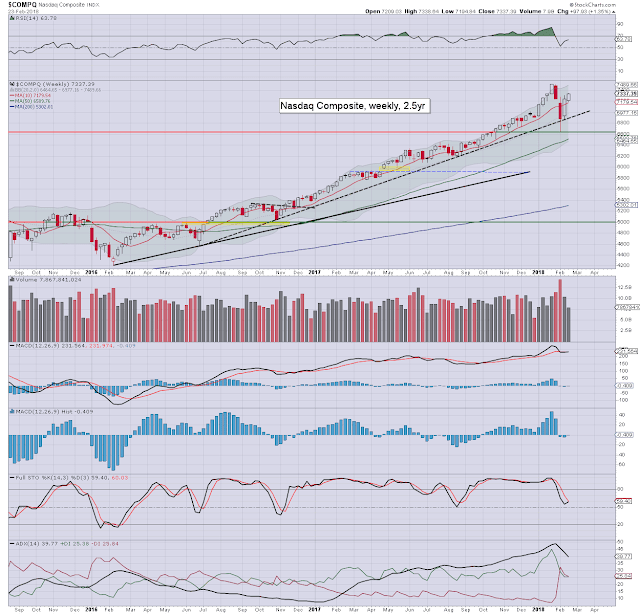 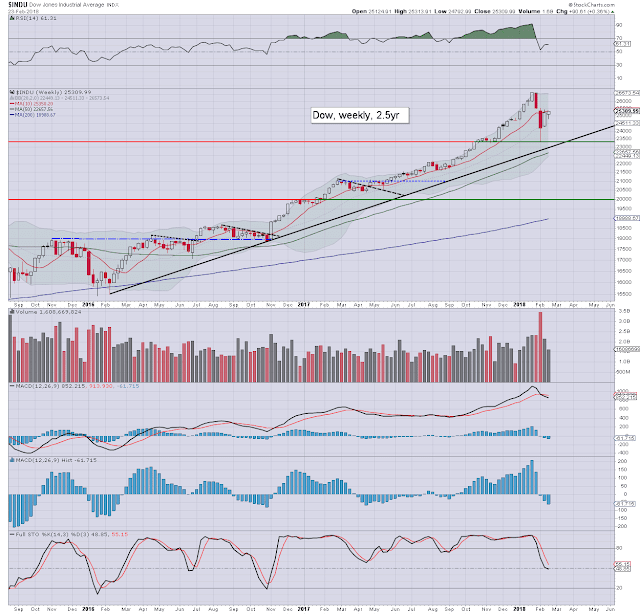 The mighty Dow gained 90pts (0.4%) to 25309. Keep in mind the recent hist' high of 26616. Further, note the 2.618x Fibonacci extrapolation of 26701. Any price action >26800s would be decisive, and eventually bode that even if there is a very severe drop this summer/autumn, the main market should still quickly recover, and make another push to sp'4-5K before the grander cycle has fully played out. Certain 'signal' stocks, such as INTC, X, and BAC are suggestive of that hyper bullish outlook. 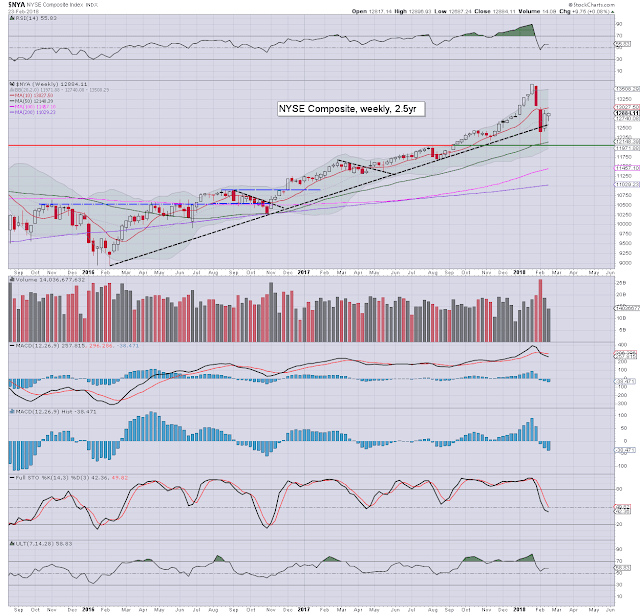 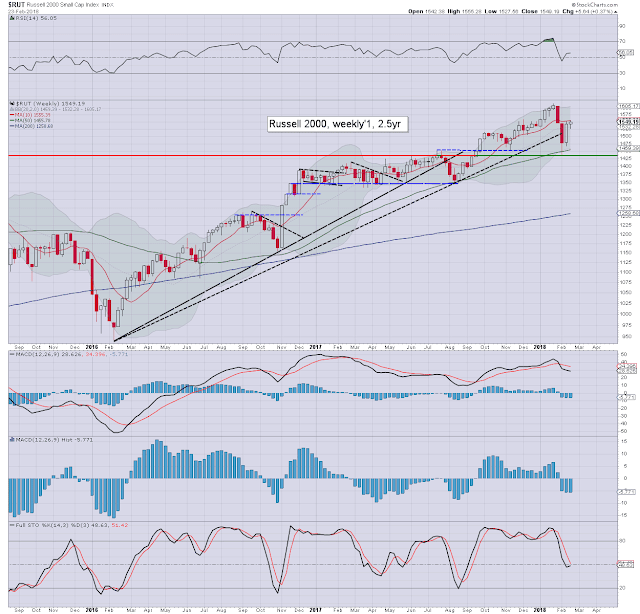 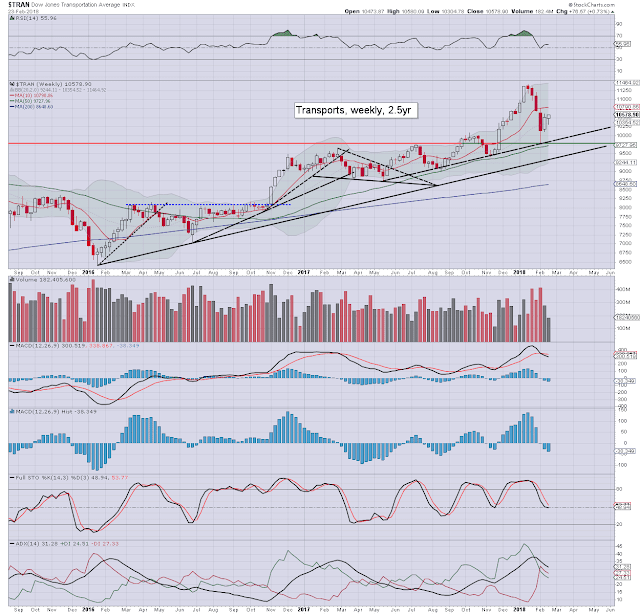 A choppy week for US equities, but all six main indexes settled net higher.

The Nasdaq is leading the recovery, with the NYSE comp' trailing.

The key low from Feb'9th looks secure into/across the spring.

Considering the power of the recent correction, a stronger wave - from around sp'3K, could be expected this summer/early autumn, on the order of 15/20%.
-- 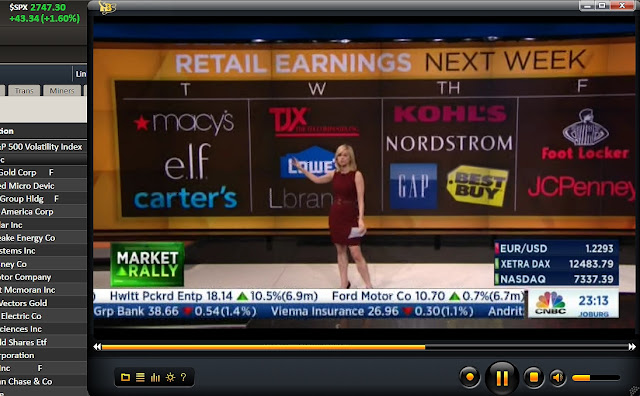 Fed Chair Powell will appear 10am, before the US House. That will garner blanket coverage on the financial networks, and Mr Market will be hanging on every single word.

*In addition to Powell on Tuesday, Bullard will appear early Monday, and Dudley on Thurs'

**As Wednesday is month end, expect more dynamic price action and higher volume. For the chartists out there, the monthly settlements will be massively important.
--