With the indexes failing to be inspired by the FOMC, the VIX held moderate gains into the close, +7.2% @ 14.49. The VIX daily chart is suggesting a new up cycle is now underway, first soft target is VIX 16/17, but more importantly, the VIX 20 threshold is the real bear prize. 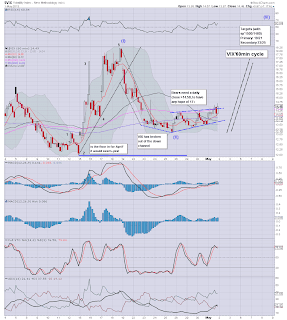 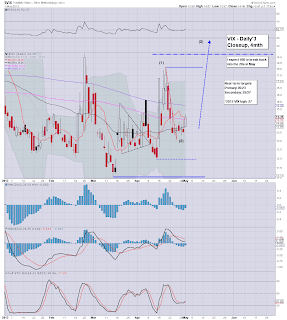 So, we just about hit my VIX closing target of 14.50. This should open the door to hitting 16/17s by the Friday close. However, VIX could - in theory at least, go a lot higher than that.

As we saw just a few weeks ago, the VIX can surge into the high teens in just a few hours. As many bears have been wondering for some months, when will the VIX break back into the 20s? It could come a lot sooner than many are considering.

However, if market gets rattled and upset by further lousy jobs data on Friday, I think there is a 'small' chance of sp'1540s, which would potentially offer VIX 19/21.

The main indexes all closed lower, lead by the Transports and Rus'2000, which both fell by around 2.3%. The sp' decline of 0.9% was 'interesting', but bears clearly to push a bit lower before there can be any confidence. VIX spiked a little into the close, into the 14.50s 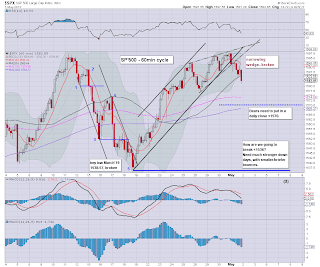 With the FOMC out of the way, things just got a lot simpler for those in bear land.

Posted by Trading Sunset at 21:04:00
Email ThisBlogThis!Share to TwitterShare to FacebookShare to Pinterest

With the FOMC press release out of the way, things are a little easier for the bears. The daily index charts are rolling over, lead by the Trans & R2K. There is serious weakness in the metals/oil market, and if the VIX can get a close >14.50...it bodes well for Thur/Friday. 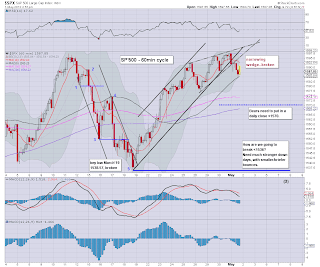 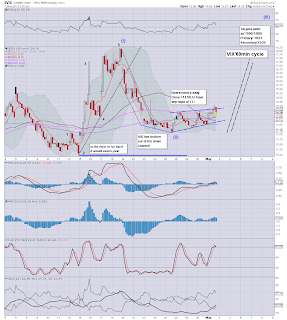 Last Fridays low of sp'1577 is now the next soft target, with the 1560s making it rather decisive.

I realise, many out there think we'll merely see another bounce from the 1570s.

Lets see how we close!

FB is weak...earnings at the close (I think)

..rats starting to jump....VIX making a play at a new high
-

3.39pm looks okay for the bears into the close..and across into Friday.
Posted by Trading Sunset at 19:53:00
Email ThisBlogThis!Share to TwitterShare to FacebookShare to Pinterest

Here we go again, its time for another FOMC press release. Things might get a little wild in the remaining two hours. Daily index charts are rolling lower, with the VIX daily pushing back upward. How we close today....will be critical. Metals and Oil remain under severe pressure. 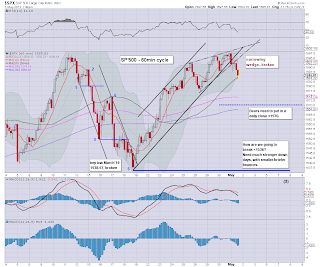 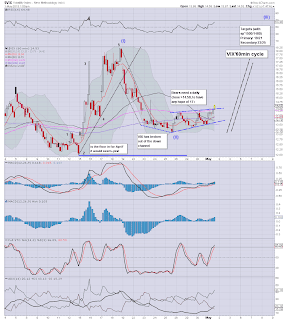 Suffice to say...lets just see how this turns out.
-

Those bull maniacs seeking higher monthly purchases going to have to wait until at least June'19.

Market trying to battle back into those 1590s..hmm.

2.30pm..despite the little post FOMC bounce...Trans/R2K are significantly lower, along with metals and Oil.

I have to think the main indexes will follow, and if the Fridays jobs data is lousy...a weekly close under the key 1570s..is viable.

VIX is struggling to hold 14s...but..still 90mins left of the day.
Posted by Trading Sunset at 18:51:00
Email ThisBlogThis!Share to TwitterShare to FacebookShare to Pinterest

Whilst the headline indexes are only moderately lower, the two leading indexes - Transports and the Rus'2000 are significantly lower. They lead the way up...and they are probably leading the way down. VIX is holding the low 14s, but bears need 15s to start to get a touch pleased. 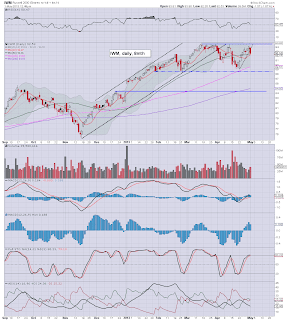 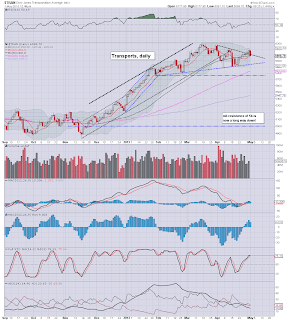 Those are pretty decisive turns on the Trans/R2K, and if we close at just current levels, it'll make for a good confirming daily turn in the cycle.

Considering the rather severe weakness in the metals (inc. copper), and Oil, I think bears have a chance.

someone got a leak of the FOMC press release ?
Posted by Trading Sunset at 17:52:00
Email ThisBlogThis!Share to TwitterShare to FacebookShare to Pinterest

12pm update - if the Fed fails to inspire

Whilst equities are still holding up, there are some pretty strong little tremors out there. The precious metals, Oil, and many food commodities are getting smashed lower by 3-5%. If the Fed fails to inspire the market with the 2pm press release, equities look set to follow. 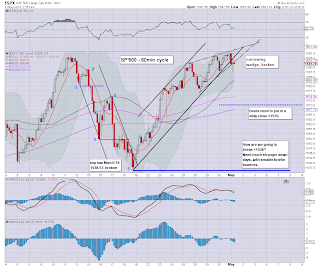 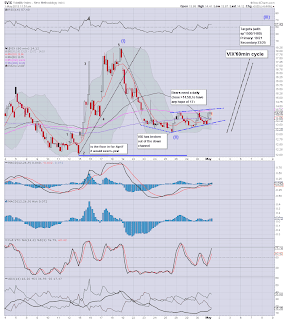 The main equity market is still only a touch lower, and even though the VIX is higher, its still in the 14s, which is frankly just crazy low.

I'm sticking with the 'broken wedge' theory. Obviously, the short-stop for new positions remains 1597. If the market snaps into the low 1600s on 'further QE talk', then it' would make for a deeply disappointing day.

I can only hope the algo-bots get 'annoyed' by the Fed speak.


12.20pm... Have you noticed the Trans/R2K, both getting whacked...whilst headline indexes holding together?

Annoyingly...things still look dependent upon the Fed.
Posted by Trading Sunset at 16:53:00
Email ThisBlogThis!Share to TwitterShare to FacebookShare to Pinterest

11am update - daily charts rolling over

Its Fed day, so everything is somewhat uncertain until the close, but at the moment, the market appears to be rolling over on the daily charts. VIX daily cycle is similarly ticking back upward. Precious metals and Oil are seeing some very significant declines. 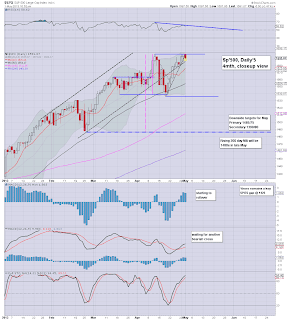 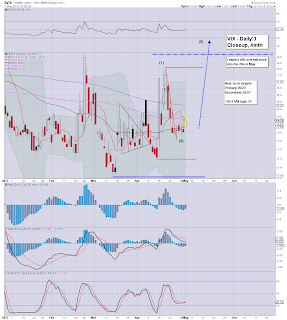 Lots to update...on what will be an especially busy afternoon. FOMC @ 2pm  - but NO Bernanke press conf. 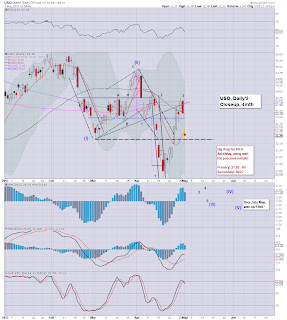 If the market does break lower across May, target is 28/27
-

Its time to see some VIX power.

*Copper... $3.07.   A break of 3...opens up a collapse to $2..which has rather exciting implications for gold/silver..and oil..and even equities.
Posted by Trading Sunset at 15:56:00
Email ThisBlogThis!Share to TwitterShare to FacebookShare to Pinterest

Welcome to May! Market is opening moderately weak. Bears need to see sp<1570s, with VIX 16/17s to know this latest up wave is complete. Precious metals and Oil are very weak, and both are possible leading warnings for the equity market. USD is still weak, -0.3% 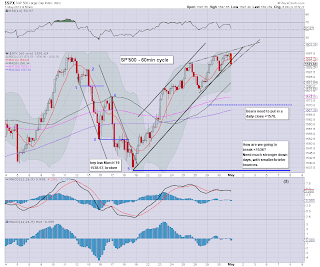 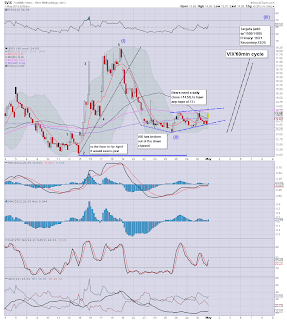 So...a little weakness to start the day, but its nothing significant yet. In fact, baring a break <1570, I won't be the least bit pleased.

Its been a rough past 7 days for the bears, and the obvious big target is the 1536 low. That is an awful long way down right now, and I find it hard to imagine the market getting spooked enough across the next few days to have any chance of hitting that.

As ever, look to the VIX. If we see some power in the VIX, 15/16s, then it would open the door to an 'interesting' Friday.

--
*I will be focusing on Oil especially this week, since I am short USO from the low 33s.

Oil is confirming a turn lower... 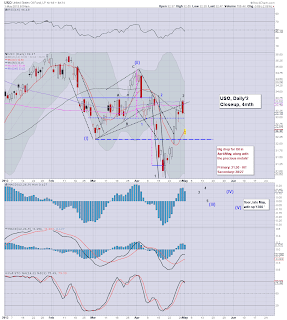 I am seeking USO in the mid 31s. If the market unravels...then 28/27 is the bigger target for a key multi-month low.


10.11am.. market looks to have broken the narrowing wedge on the index charts.

First target remains the sp'1570 threshold. Bears should be seeking a daily close under that this week. VIX in the 14s...I'd like to see 15s later in the day.
Posted by Trading Sunset at 14:52:00
Email ThisBlogThis!Share to TwitterShare to FacebookShare to Pinterest

Good morning. Futures are largely flat, sp' is set to open around 1597/98. USD is notably weaker again, although that isn't help precious metals or Oil, the latter of which is down 1.5% already. ADP data came in somewhat weaker than expected @ 119k, vs 155k exp. 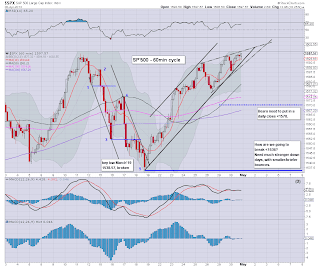 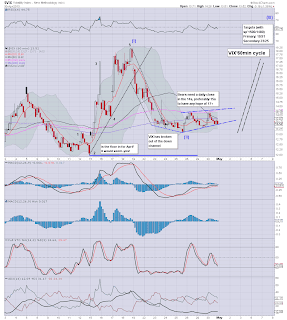 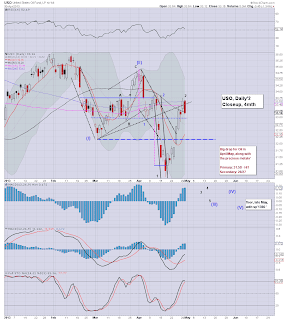 I am seeking the mid 31s by this Friday. Today will no doubt see a confirmed rollover on the MACD cycle..and there is very considerable way to fall.
-


9.22am... precious metels snap lower...Silver is in trouble of breaking the recent low.

Oil continuing to weaken ahead of the oil report.
Posted by Trading Sunset at 13:33:00
Email ThisBlogThis!Share to TwitterShare to FacebookShare to Pinterest

April saw net gains for the main headline indexes. The two market leading indexes - Trans/R2K, both saw minor declines though. Meanwhile, Copper and Oil declined in April, with the former especially suggestive of 'deflationary' issues. May will be interesting, especially if some significant volatility (VIX >20) comes back to the market. 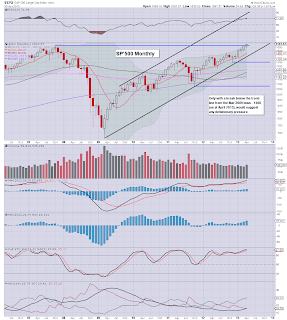 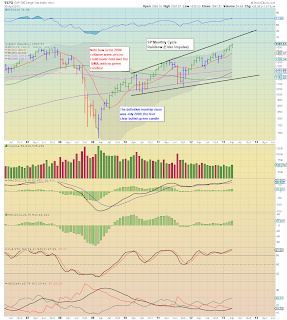 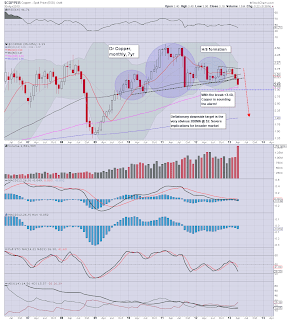 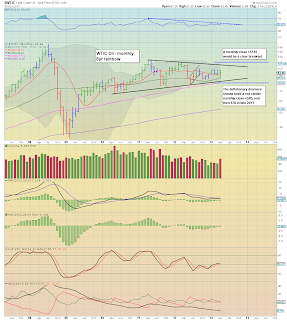 The market almost seemed to want to spite the bears into the close, with a fractional new high of sp'1597.57. That made for a monthly gain of 28pts (1.8%) which is certainly nothing to be dismissed.

Primary trend remains higher, as the rainbow chart clarifies. A simple green bullish candle, the fourth consecutive one, and its now been 20 months (Sept' 2011) since we had a red candle.

With ongoing QE-POMO, and an absence of 'black swans', why would May see any declines?

Oil and Copper declined by 3.8 and 6.4% respectively across April. Both closed the month well off their lows, so the monthly price action was actually more impressive for the bears than it might initially look.

For me, Copper is the big one to watch. The big $3 level is an absolutely critical one, and if we see sub 3s at any point in May, the bulls should be at least 'somewhat' concerned..

Similarly, a break < $80 for Oil would be a major issue, and open the door to what a fair number of analysts are saying - 'WTIC Oil in the 50s'. Right now, that is of course a very long way down, but April did see some serious downside.

Wednesday has the ADP jobs number, ISM, construction, and the weekly EIA oil report. Infinitely more important though is the FOMC. An announcement is due at 2pm, I'm unsure if the Bernanke will be doing a follow up press conference.

Unquestionably, this month has been a real disappointment for those in bear land. The April declines have been fully reversed, and we have closed the month with new highs on the SP and Nasdaq.

May can only be better...right?

The main indexes all closed moderately higher to end the month, lead by the Nasdaq which managed gains of 0.66% - greatly helped by a very strong AAPL. Near term trend is still higher, and there is still absolutely no sign of a turn/levelling phase. May will start bullish. 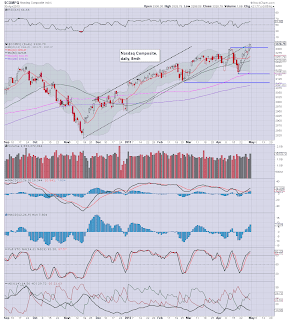 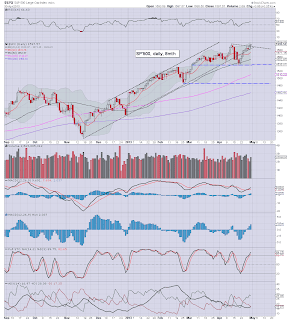 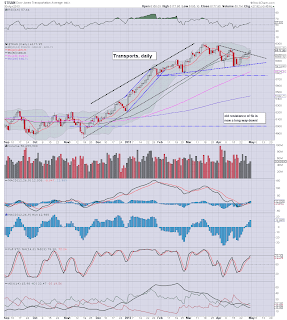 In the closing minutes of April trading, the SP' managed a fractionally new high of 1597.57. This largely confirms the recent new high seen in the Nasdaq.

Clearly, other indexes are still to confirm the new highs, but with the FOMC tomorrow, there is now the imminent threat of sp'1600s. The weekly charts are offering 1620s 'at any time'..so...bears beware.

Frankly, all the bears have left right now is the hope of a 'dire' monthly jobs data point this Friday. Yet, the recessionary Chicago PMI number today did nothing to stop the market rallying into the close.

It has to be wondered, even if the Friday number is a net loss, would it even matter? After all, QE will then be even more likely to continue, and more than anything, that seems to be all that the US equity market cares about.