VIX crushed into the weekend

With equities building very significant gains, the VIX was ground down across the day, settling -18.2% @ 14.81. Near term outlook is for the sp'2115/20 zone, which will likely equate to VIX 13/12s. The 20 threshold again looks out of range until after the next FOMC. 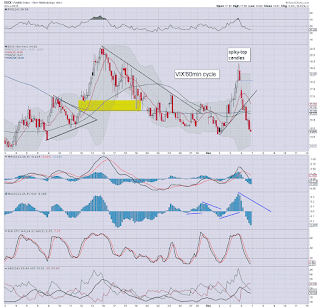 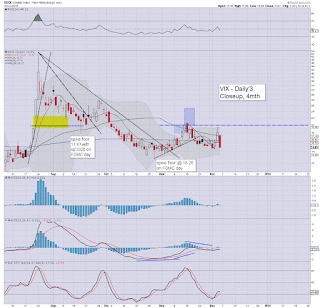 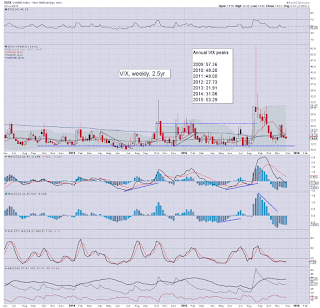 Suffice to note.. the two Thursday afternoon hourly candles were indeed a warning that equities were in a flooring phase.

VIX looks set to fall further next week, as the sp' breaks back above the 2100 threshold. 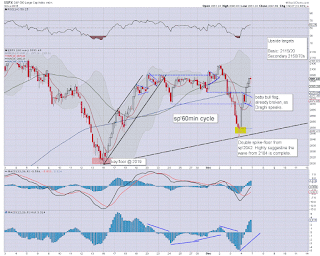 .. and another crazy week in the twisted casino comes to a close.

--
After the Thursday afternoon spike-floor candles I thought I was bold in calling for the sp'2070s today. Yet.. with Draghi talking the Euro down, things spiralled through resistance of 2080.

It was a very bizarre end to the week... but then.. the underlying upside pressure was always to the upside.

--
*thanks for the many comments this week, it is always good to hear from some of you.

--
*the usual bits and pieces across the evening to wrap up the day.
Posted by Trading Sunset at 21:01:00
Email ThisBlogThis!Share to TwitterShare to FacebookShare to Pinterest

It has been another wild week in the world's most twisted casino, with a Wed' opening high of 2104.. then a rather fierce collapse wave of 3.1% into Thursday afternoon. The sp'500 is now set for a fractional net weekly gain (>2090.11). Incredible. 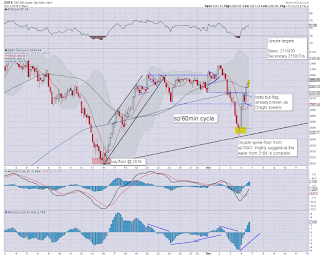 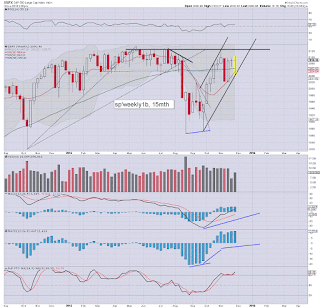 Regardless of the exact close... its been a very dynamic few days, as the market continues to try to adjust to the notion of the Fed raising rates... which is now a certainty.

No doubt today's fierce whipsaw higher has greatly annoyed some traders, but at least its not boring, right?
--

A straight run to the sp'2150s remains VERY viable into the FOMC of Dec'16th.

yours..... tired...   and I think many of you out there will be too.
Posted by Trading Sunset at 19:51:00
Email ThisBlogThis!Share to TwitterShare to FacebookShare to Pinterest

US equities have broken a new intra high of sp'2089.. which is a rather insane 47pts higher from the Thursday afternoon low. Draghi has unquestionably been a key variable across the last two days. Now its case of whether the sp' can close in the 2090s.. for a net weekly gain. Incredible. 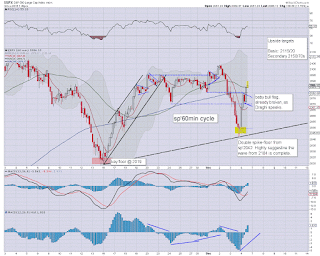 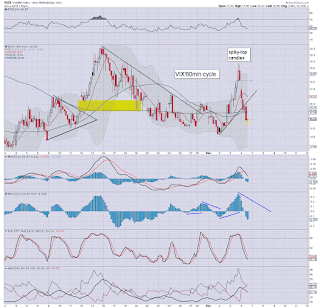 *like the sp' hourly spike-floor candles I was warning about yesterday afternoon, the VIX naturally had its own spiky-top candles.

Yes, the scale of today's rally is higher than even I expected, but the rally itself... no.. that was indeed 'probable'.
--

After extensive careful research and analysis.... it is clear that if Batman was a trader he would be bullish... and Superman would be bearish.

I'm hopeful that the moody Supes' gets his ass kicked in 2016, before the doomer tries to finish them all off.
--

yours.... Bullish Diana Prince
Posted by Trading Sunset at 18:52:00
Email ThisBlogThis!Share to TwitterShare to FacebookShare to Pinterest

US equities are building further gains as Draghi is talking again. Price structure was a baby bull flag.. already broken above, into the sp'2080s. First target remains 2115/20.. via the surprising detour of 2042. Oil remains notably weak, -2.9% around the $40 threshold. 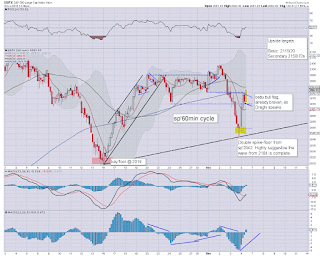 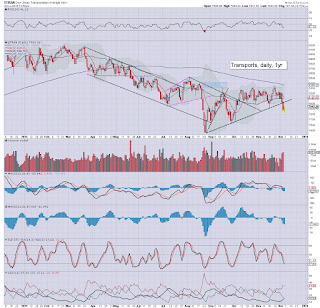 So.. Draghi is now trying to cool the Euro, and assure the market he has all the tools.

Now the unthinkable has to be asked...

CNBC live footage of an NBC reporter sifting through the apartment of the San Bernadino assailants.

Seriously... WTF ? A media hack on live TV... just going through boxes, and then presenting it to viewers.

For the conspiratorial minded out there... its one hell of an example of the link between the mainstream media and Government.

Lesson of the day, if you 'Play nice', and present the govt' view..  you too can tag along with agents of law enforcement, and rummage in other people's homes.
--

stay tuned
Posted by Trading Sunset at 17:51:00
Email ThisBlogThis!Share to TwitterShare to FacebookShare to Pinterest

US equities have seen a morning high of sp'2079. With the weekend ahead, the rest of today might merely see the market build a baby bull flag.. setting up the 2080/90s for next Monday. In any case.. all indexes are set for net weekly declines. 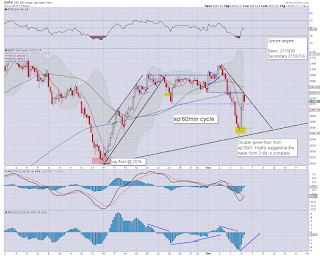 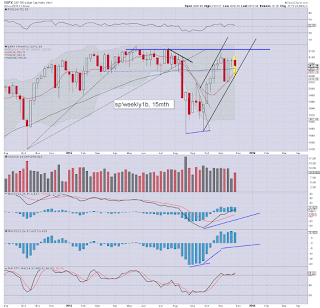 So... we're a little stuck, but any bears seeking any further moves <2042 are being overly hopeful.

As I noted yesterday, a weekly close in the 2070/75 zone... that would be something the equity bulls should be relieved to see.

--
time for lunch
Posted by Trading Sunset at 16:53:00
Email ThisBlogThis!Share to TwitterShare to FacebookShare to Pinterest

11am update - sunshine for the bull maniacs

US equities continue to build gains, with the sp' already close to the 2080s. With a bullish MACD cross due within 1-2 hours, the market should be able to broadly climb into next week. Commodites are mixed, Gold +$22, whilst Oil remains trading back and forth across the $40 threshold, currently -2.2%. 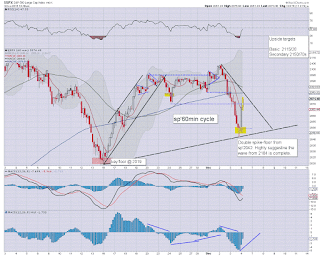 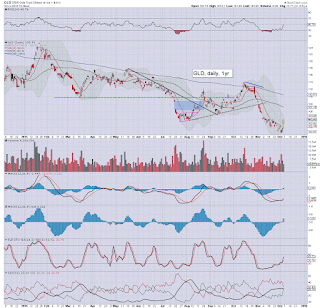 Again, the 2 spike-floor candles yesterday afternoon were a classic example... warning the bears that the market was highly vulnerable to seeing renewed upside.

Now its merely a case of whether the Wed' opening high of 2104 is broken above. I believe it will be.. and my first target remains 2115/20 zone. 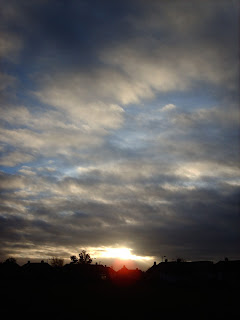 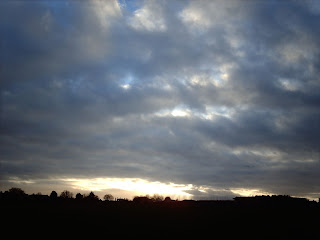 .. with just over two weeks until the winter solstice.

--
time to cook
Posted by Trading Sunset at 15:51:00
Email ThisBlogThis!Share to TwitterShare to FacebookShare to Pinterest

The Thursday 2pm and 3pm hourly candles for the sp'500 were a clear warning to the equity bears, and the market is already pushing for the 2070s. A weekly close in the 2080s is now on the menu. Meanwhile, with OPEC unable to agree on anything, Oil is -2.3%. 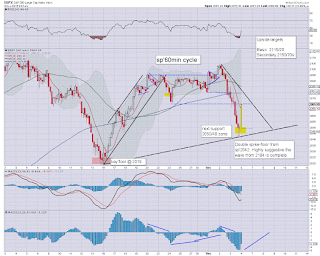 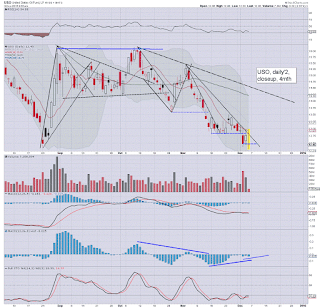 I don't highlight 'spiky candles' for no reason.. whether top spikes... or floor spikes.. they are often good warnings of a turn.

yours.. smashed in oil rigs...  , soaring in X-wings.
Posted by Trading Sunset at 14:54:00
Email ThisBlogThis!Share to TwitterShare to FacebookShare to Pinterest 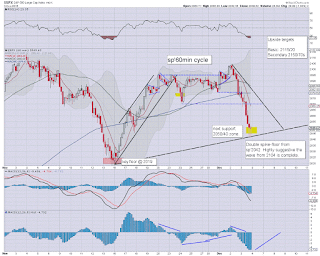 First thought... lets see how the market reacts to the jobs data.
--

Meanwhile, Oil +1.0%, as market awaits OPEC announcement. The default view is that there will be no cuts.
Posted by Trading Sunset at 13:01:00
Email ThisBlogThis!Share to TwitterShare to FacebookShare to Pinterest

Wild moves in currencies and bonds

Whilst equities saw significant declines develop across the day, the underlying cause was no doubt the carnage in currency land. Whilst the USD settled -2.2% in the DXY 97.80s, there was even more significant weakness in US bonds, with the ETF of TLT -2.7% @ $119.52. 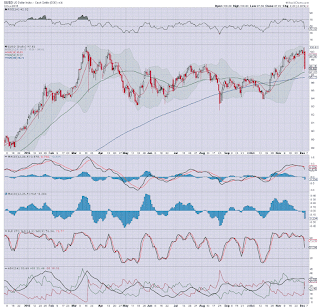 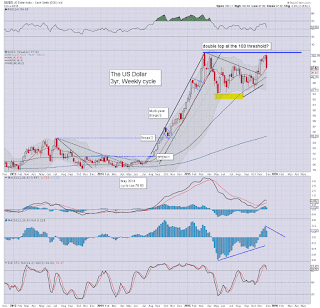 With the market deciding this was clearly 'less than expected', the Euro soared.. and this helped crush the USD.

The bigger weekly chart is pretty clear, there is a valid scenario in that we've seen a double top at the giant DXY 100 threshold.

I'm still more bullish USD than any other FIAT currency, but for now.. there is a massive reversal underway. First support is the 95/94 zone.

Any sustained action <94 would then offer further weakness to the DXY 90 threshold. Under any reasonable outlook, I don't see the USD trading under 90.

Or maybe you think the market would place more value on the depreciating Yen or the Euro?
--- 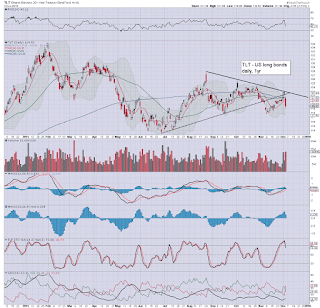 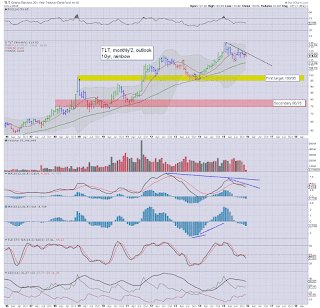 On balance, the $110s look viable in spring 2016.. not least if the Fed raise rates for a second time in March/April.

If the US bond market has peaked - as some, notably Armstrong, have suggested... then first grand target for TLT will be $100, back to levels from late 2013. Things really only get interesting if the secondary target zone of 80/75 is hit.. but that is probably not viable until late 2016 at the very earliest.

OPEC are having a bi-annual meeting in Vienna. There is high probability of a statement that will at least threaten supply cuts.

The monthly jobs data - market is expecting net gains of 190k, with a headline jobless rate of 5.0%.

*there are 3 fed officials due to speak... Bullard in the 3pm hour is especially notable.
--

US equities closed significantly lower, sp -29pts @ 2049 (intra low 2042). The two leaders - Trans/R2K, both settled lower by -1.8%. With the loss of the 200dma, near term outlook is borderline. Equity bulls need a strong counter rally on jobs Friday to at least partly negate the Wed/Thursday decline of -3.1%. 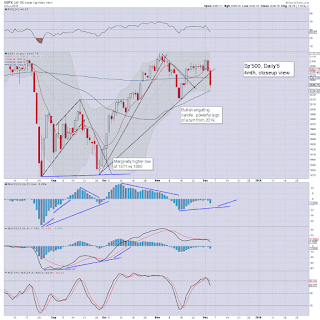 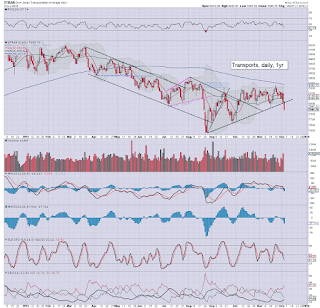 *the 'old leader' - Trans, was borderline yesterday.. .and today saw decisive break of rising support, that stretches back to the Aug' lows.

Either equity bulls can strongly rally from here.. and FAST, or the trans is a clear early warning of trouble for the rest of the market.
--