Many world equity indexes are seeing some rather significant weakness. The EU PIIGS of Greece, Spain, and Italy have been especially weak since early September. There remains notable resilience/strength in the USA and China. 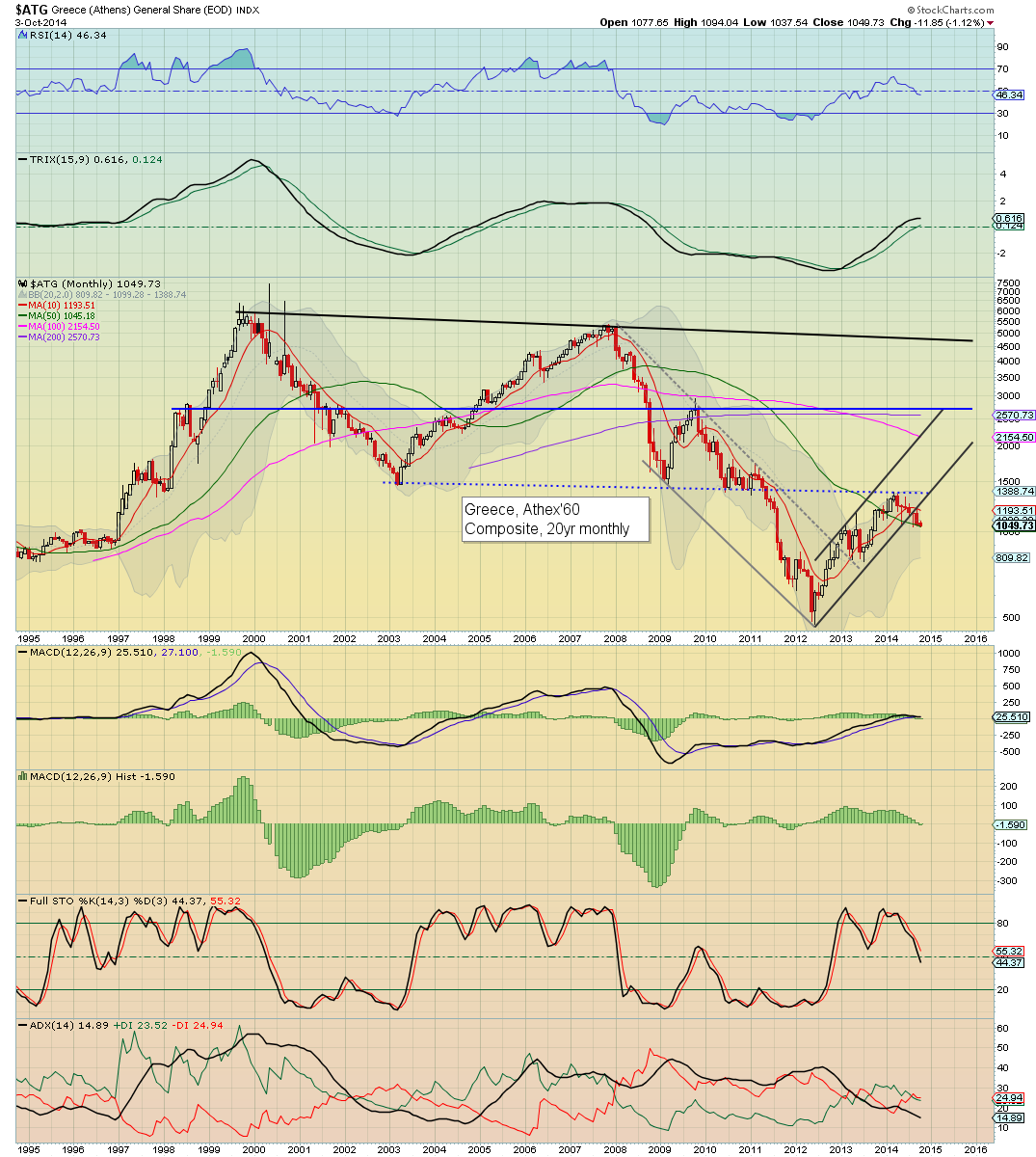 The Athex is lower for the seventh consecutive month, with the giant 1000 threshold in danger of being lost this autumn. If 1000 does fail, then next key support is around 800.. a further full 20% lower. 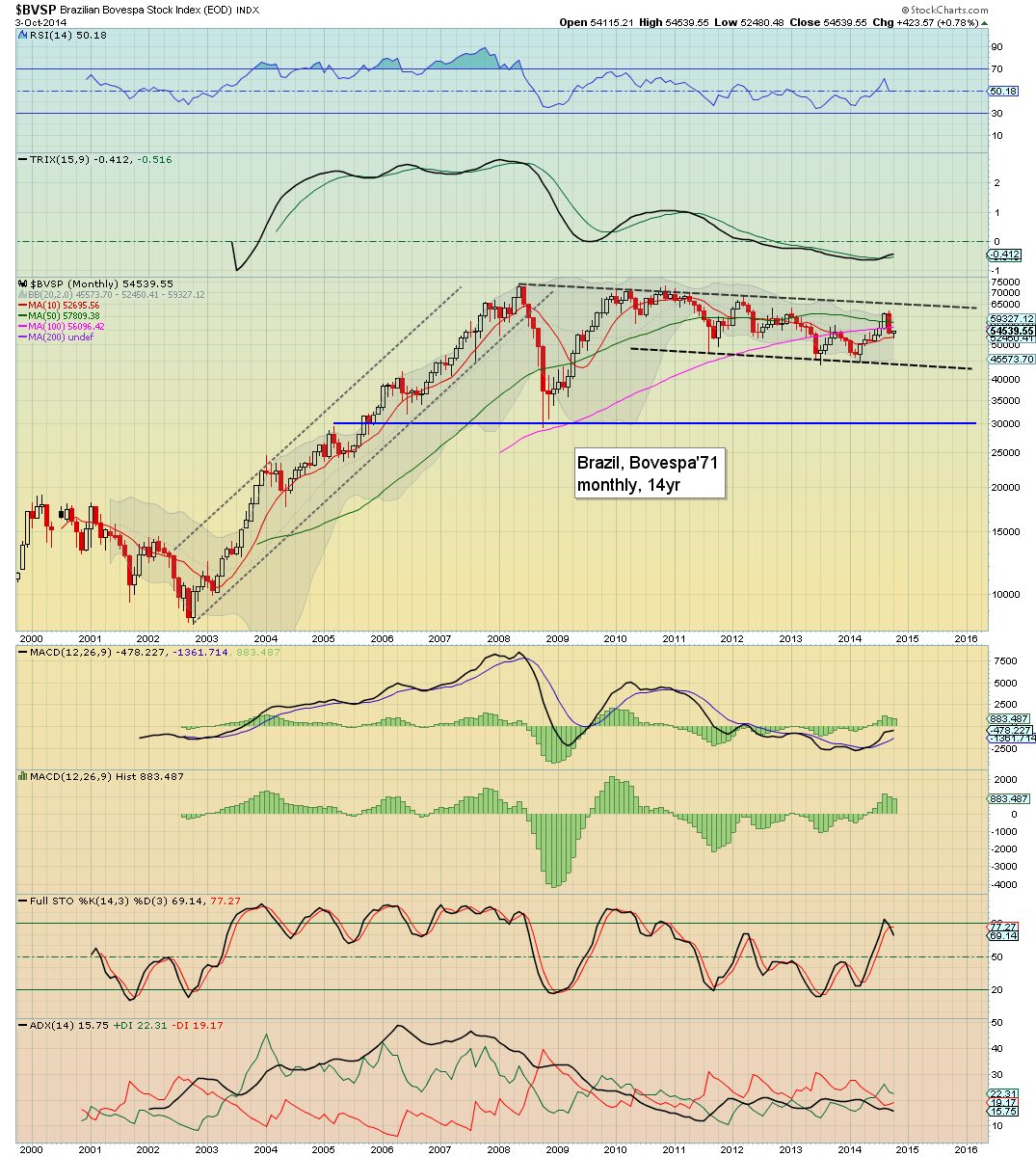 The Bovespa is seeing some very volatile price action in the past few weeks, not least due to a looming election. Regardless of how the market might initially react to further political developments this coming weekend, the September candle was of the very bearish engulfing type. Underlying MACD cycle is ticking lower for the second consecutive month. The big 50k threshold would be a rather obvious target. 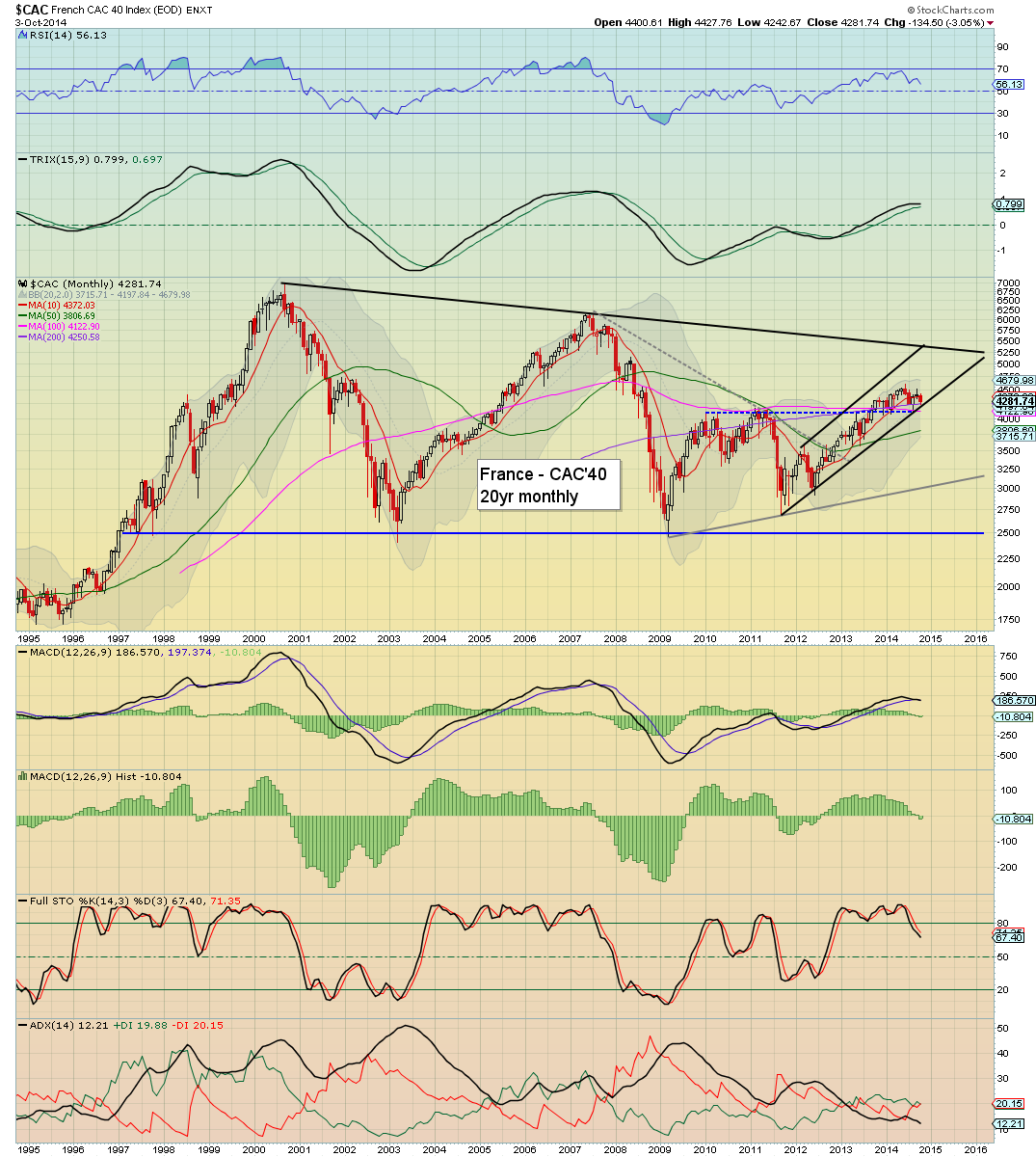 The CAC is currently lower by around -3% this month, and is in imminent danger of losing core rising support. If that fails, there is viable downside to 3800.. which is a clear 10% lower. 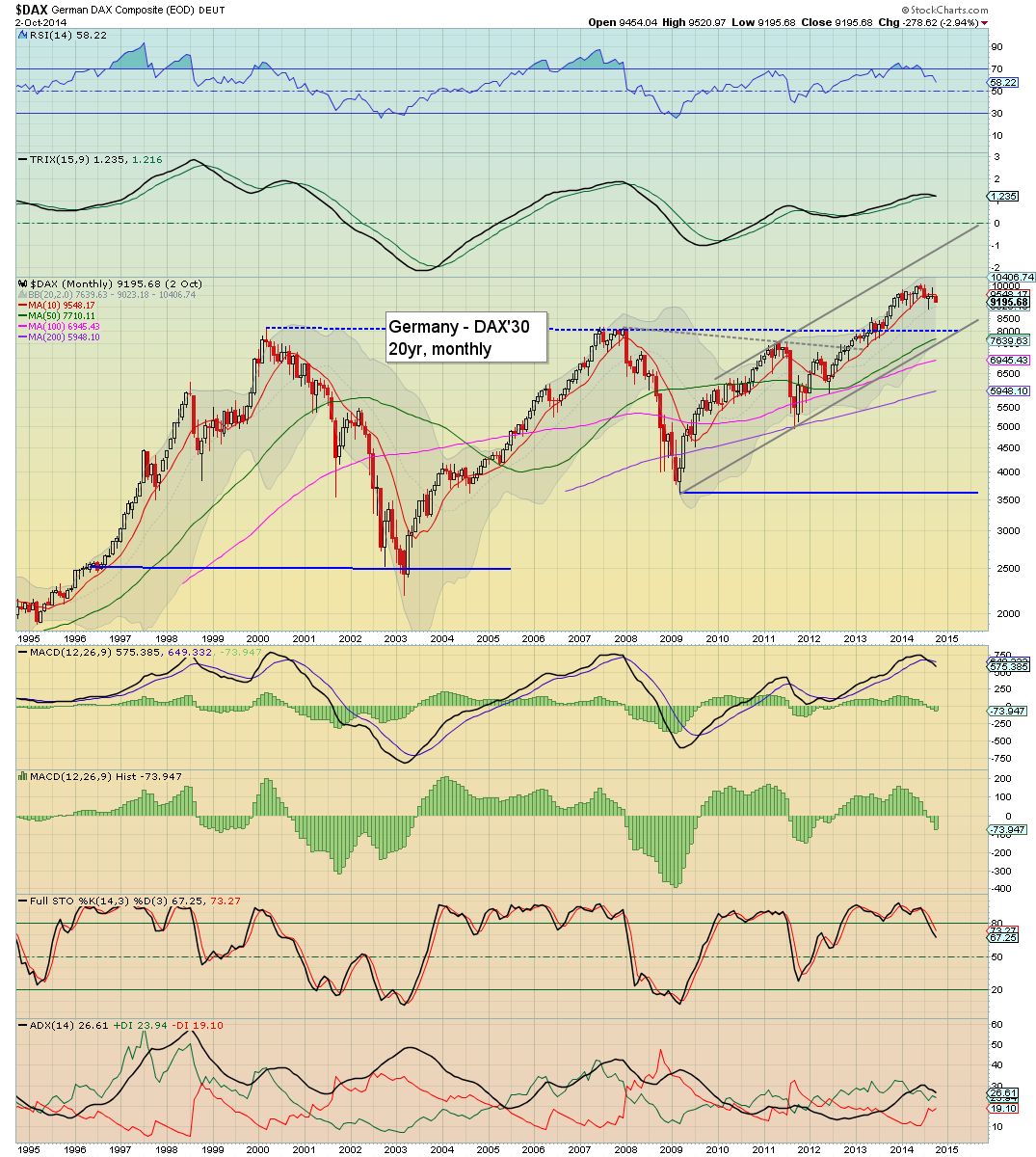 Like France, the DAX is lower by around -3% so far this month, and is looking vulnerable to slipping lower to the 8000 threshold - an effective back test of the giant double top from 2000/2007. Underlying MACD (green bar histogram) cycle is negative for the third month, and certainly favours the bears. 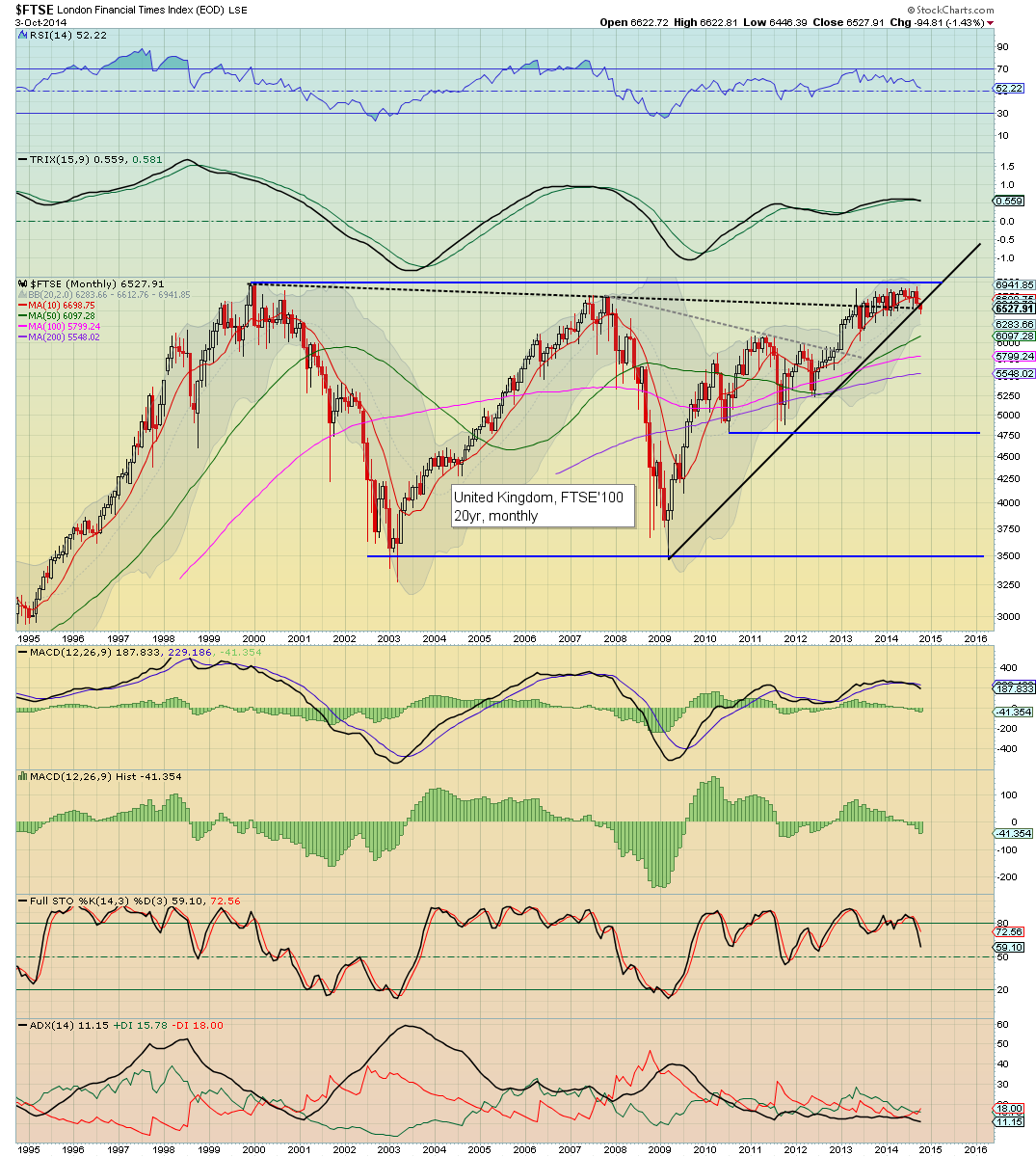 The UK market has failed for almost two full years to break the double top high from 1999/2007. The FTSE is now lower for a second consecutive month, and we have a break of the rising trend. First core support is around 6k, some 10% lower. 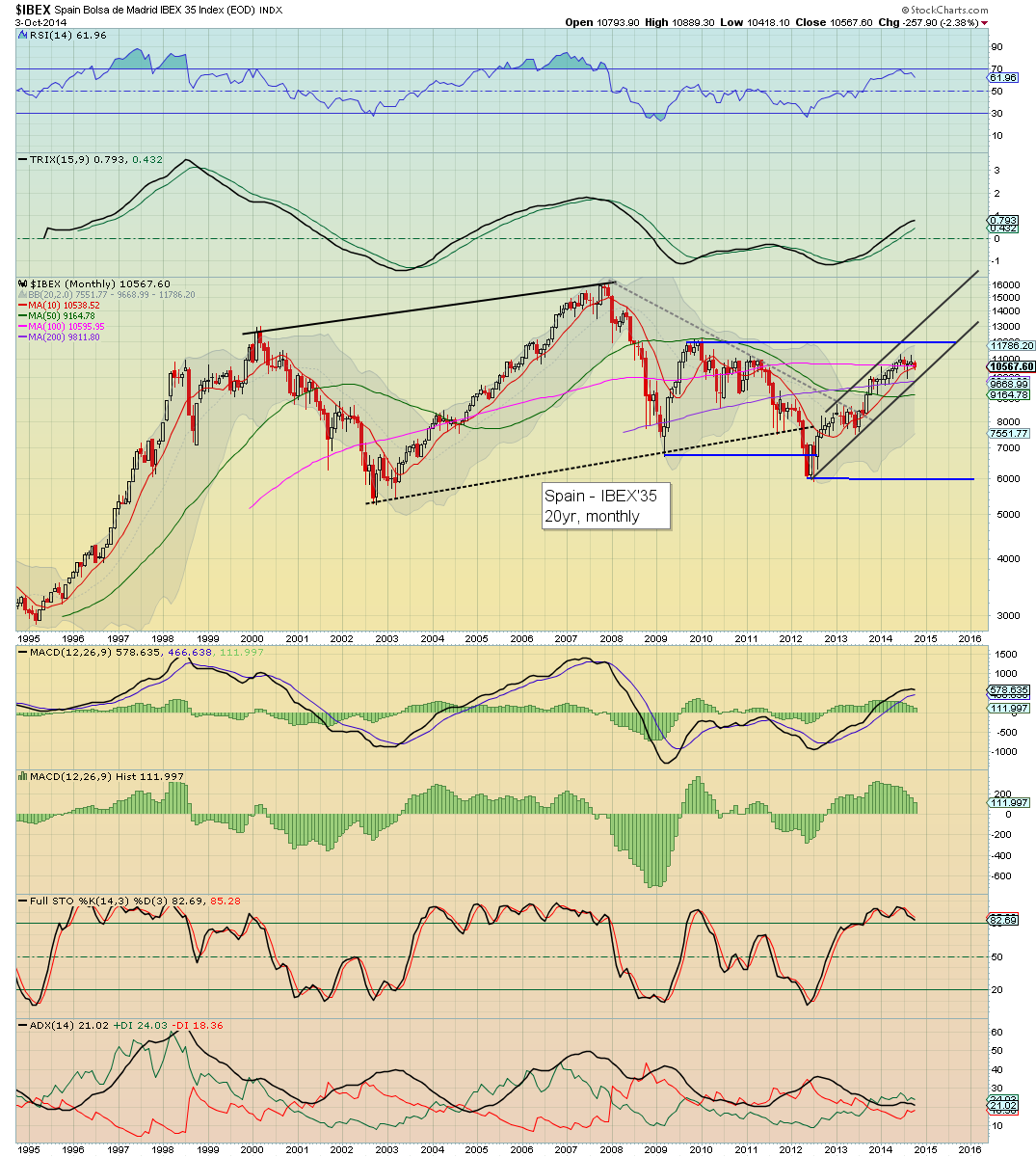 The IBEX is lower by -2.4% this month, but still, it is holding up reasonably well, and is holding within the broader up trend. First support is the giant 10k threshold.. so the equity bulls have a clear 5% of downside buffer room. However, if that fails, downside target zone would be 8000/7500, but of course, that would really make for a large intermediate wave lower. 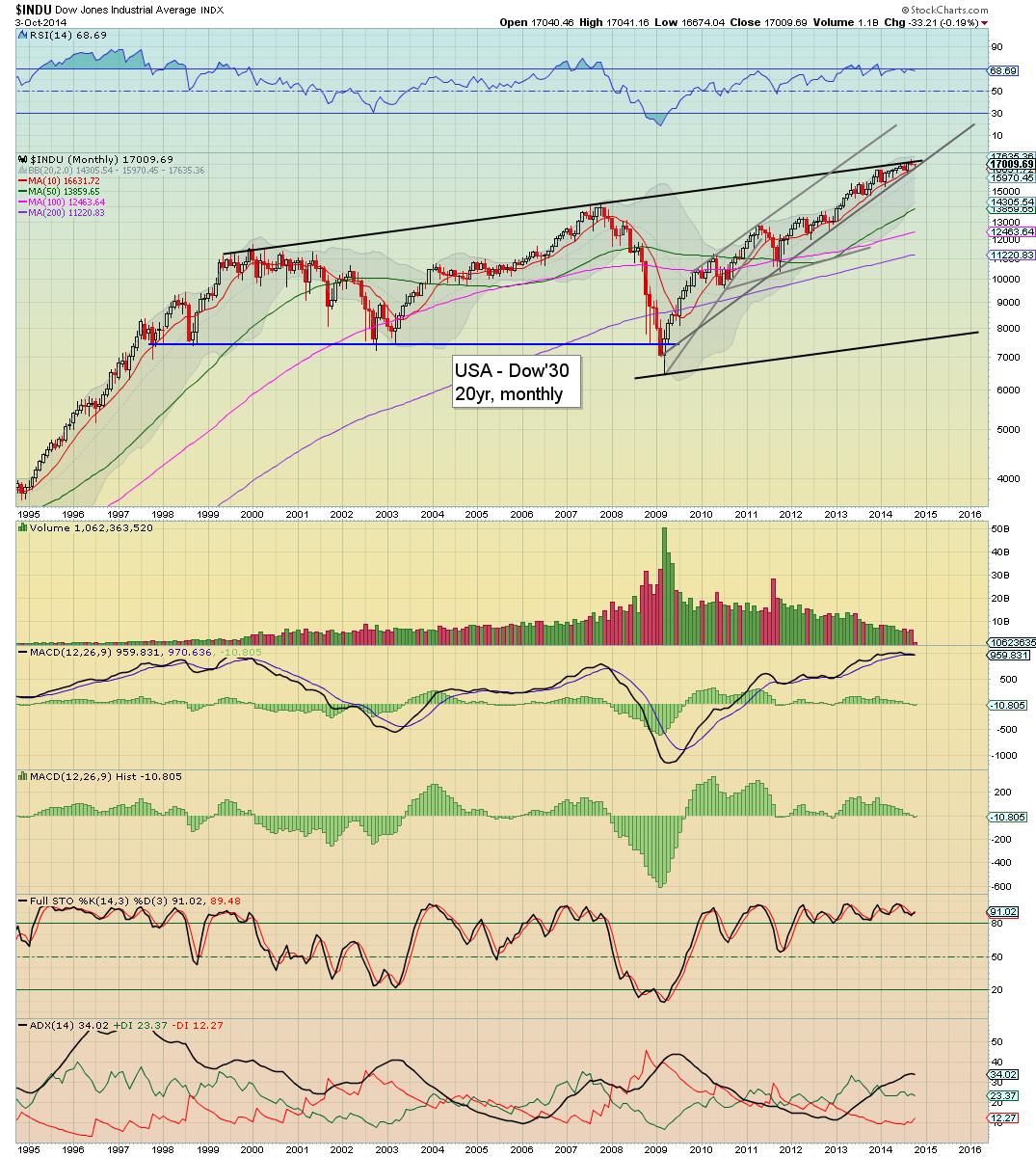 Despite the very strong rally from the Thursday morning low of the 16600s, the Dow is still a touch lower on the month so far. Underlying MACD cycle has turned negative for the first time since late 2012.

If somehow the equity bears can break lower to the August low of 16300 next week, it will cause some serious technical damage. From there, after a bounce of 3-4%, there would be viable downside to the 15000/14500 zone by end year. That of course is dependent (almost entirely) on what happens in the early part of next week. 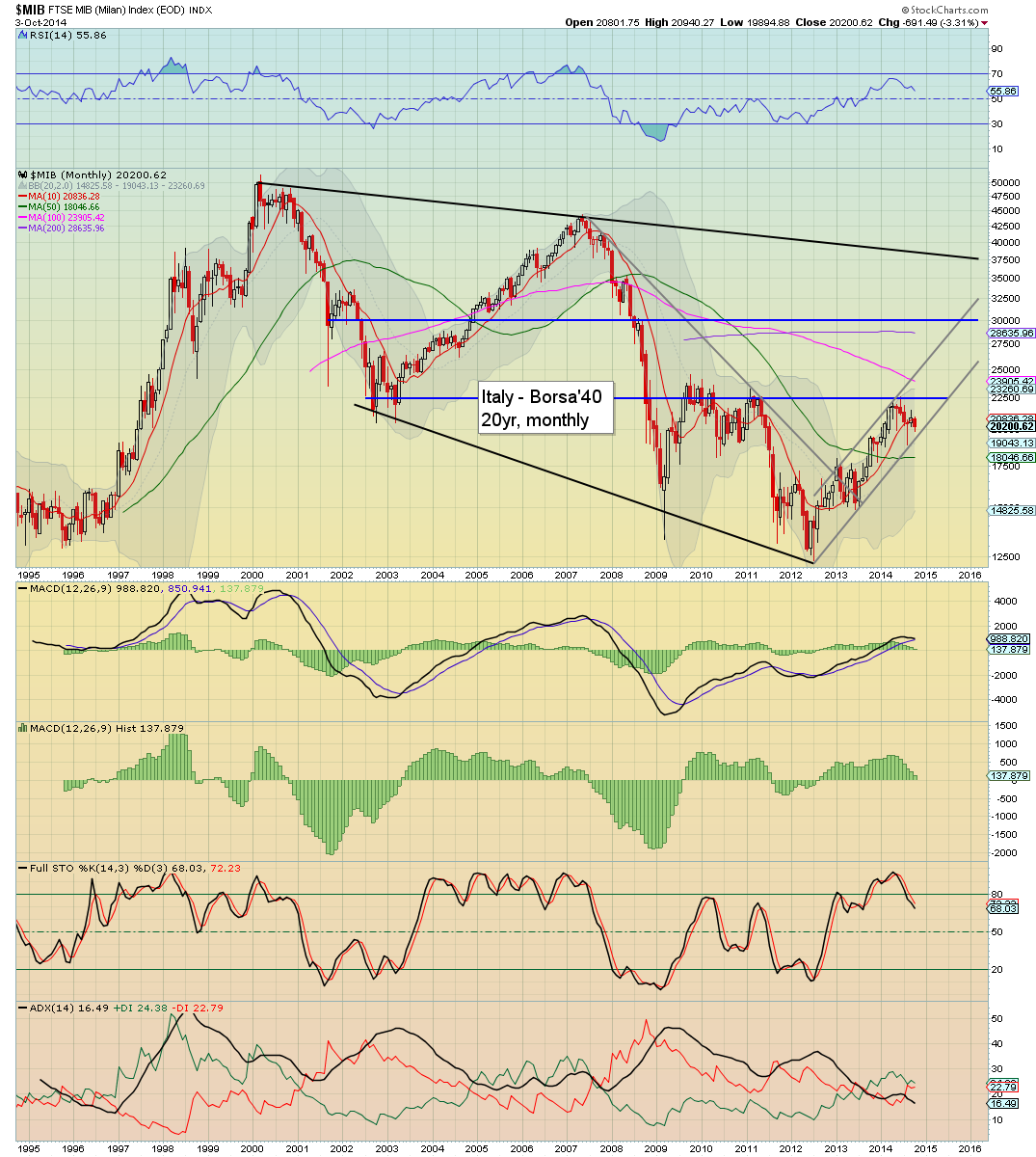 The second of the giant EU PIIGS - Italy, is lower by around -3% this month, but is still well within its broader upward trend. First support is around 19k, so the bulls have a clear 5% of downside buffer. Underlying MACD cycle is set to turn negative in November... even if prices remain relatively flat. On the upside, there is key resistance in the mid 22000s. 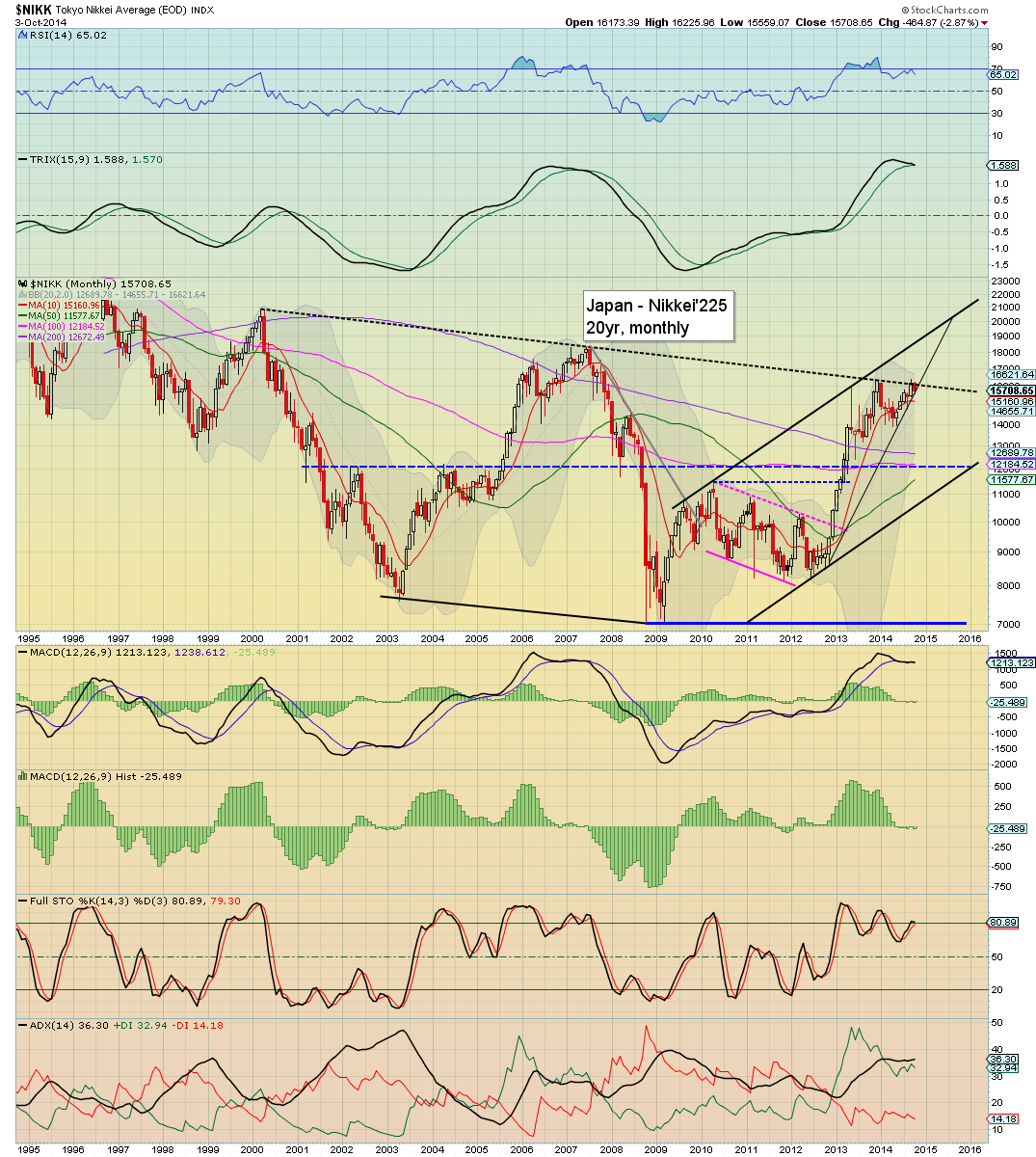 The Nikkei has managed to trade in the 16000s for the second consecutive month, but is currently -2.9% so far this month. If there is some kind of upset in the remainder of the year, then key downside support zone is 13/12k. As things are though.. having already broken above key descending resistance, the Nikkei could just as easily close October with a net gain. 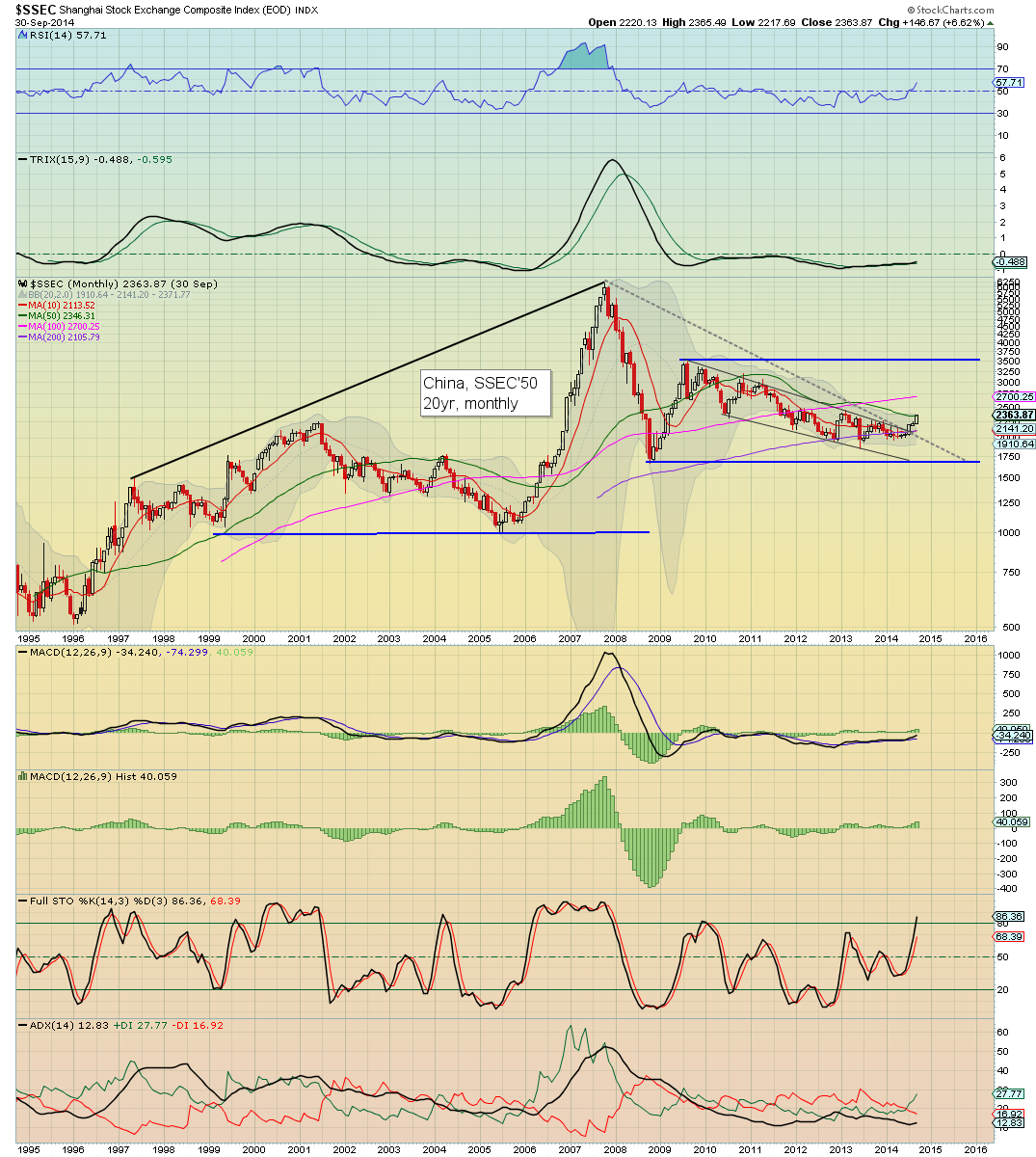 China is currently on a long 'Golden week' holiday.. and there have been no trades so far this month. September saw a very powerful net monthly gain of 6.6%.. and the Shanghai market is climbing comfortably above the core support of the giant 2000 threshold. Next upside target would be around 2500, with a grander multi-year target of 3500.

Taken as a collective, many world markets are somewhat weak. European markets are certainly having some bearish price action, as a result of underlying economic weakness. Asia is notably stronger.

The USA equity market is no doubt benefiting from huge capital inflows, and this is being reflected via a very powerful multi-month rise in the dollar.

Next week is set to be almost entirely devoid of data, and there are no Fed officials on the loose. The only notable scheduled press release is the latest FOMC minutes, due Wed' 2pm.

Five down for the R2K

Despite a ramp from a Thursday morning low of sp'1926, to a Friday close of 1967, all US indexes saw net weekly declines. The R2K fell for a fifth consecutive week, the break of the 1080 floor remains a key issue, that many seem to have already forgotten. 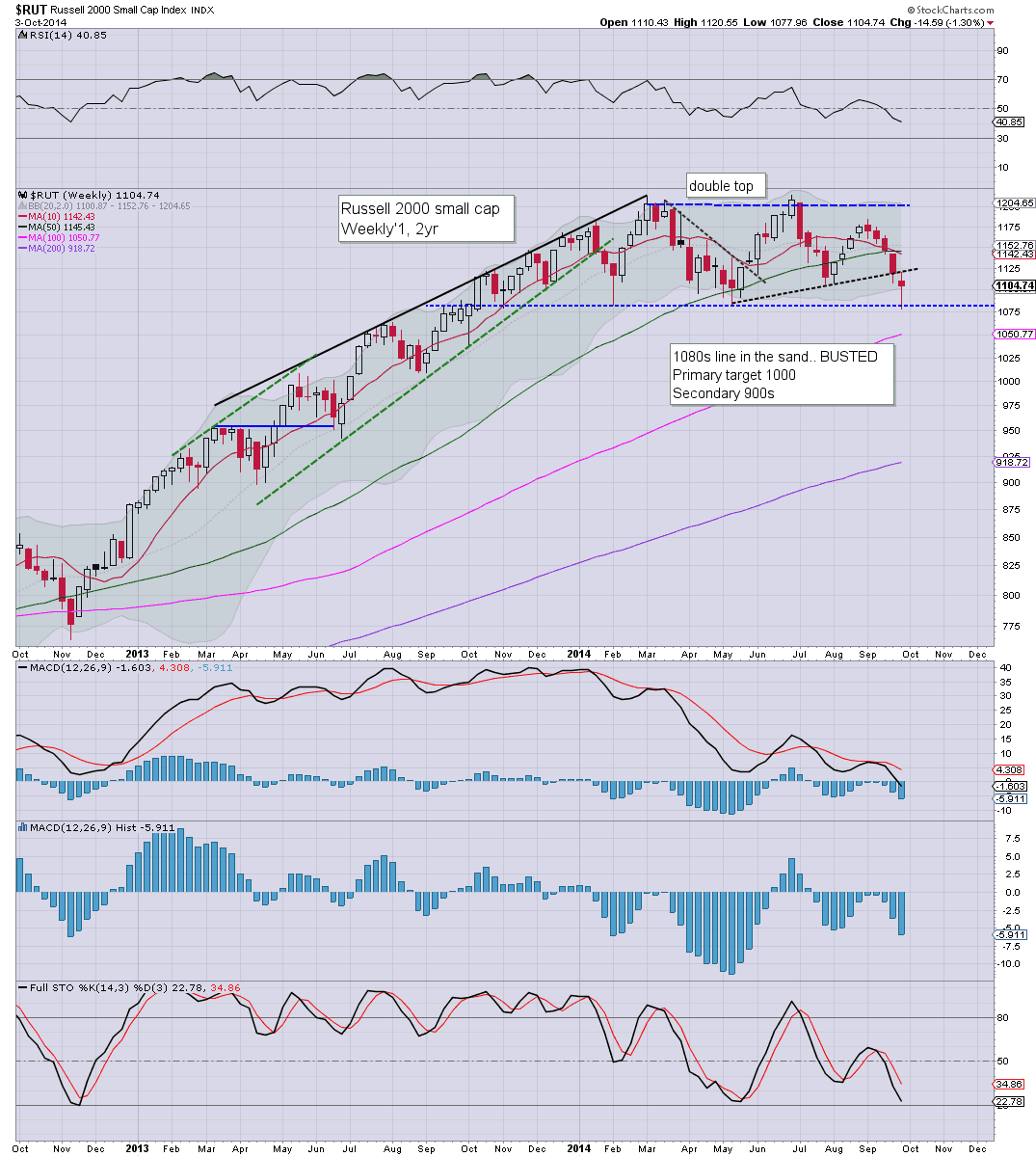 *the R2K has not seen five net weekly declines since summer 2008. Six years... I thought it merited a mention... not least with the key 1080 floor being busted (if fractionally).
--

So.. net weekly gains... and a closing red candle for the sp' weekly 'rainbow' chart. It is kinda curious how many will not be aware of such an issue, after the recent day and a half of strong gains.

Certainly, but bears can't sustain any daily closes in the sp'1970s..or higher. Similarly, the VIX will need to see a renewed surge higher.. probably a higher high in the 18/19s. Right now, those are nothing more than bold 'bearish hopes'.
--

Interesting chatter... as ever.
-

US equities climbed for a second consecutive day, sp +21pts @ 1967. The two leaders - Trans/R2K, settled higher by 2.1% and 0.8% respectively. Near term outlook is somewhat uncertain, and is dependent upon whether prices hold/break the 1970/75 zone. 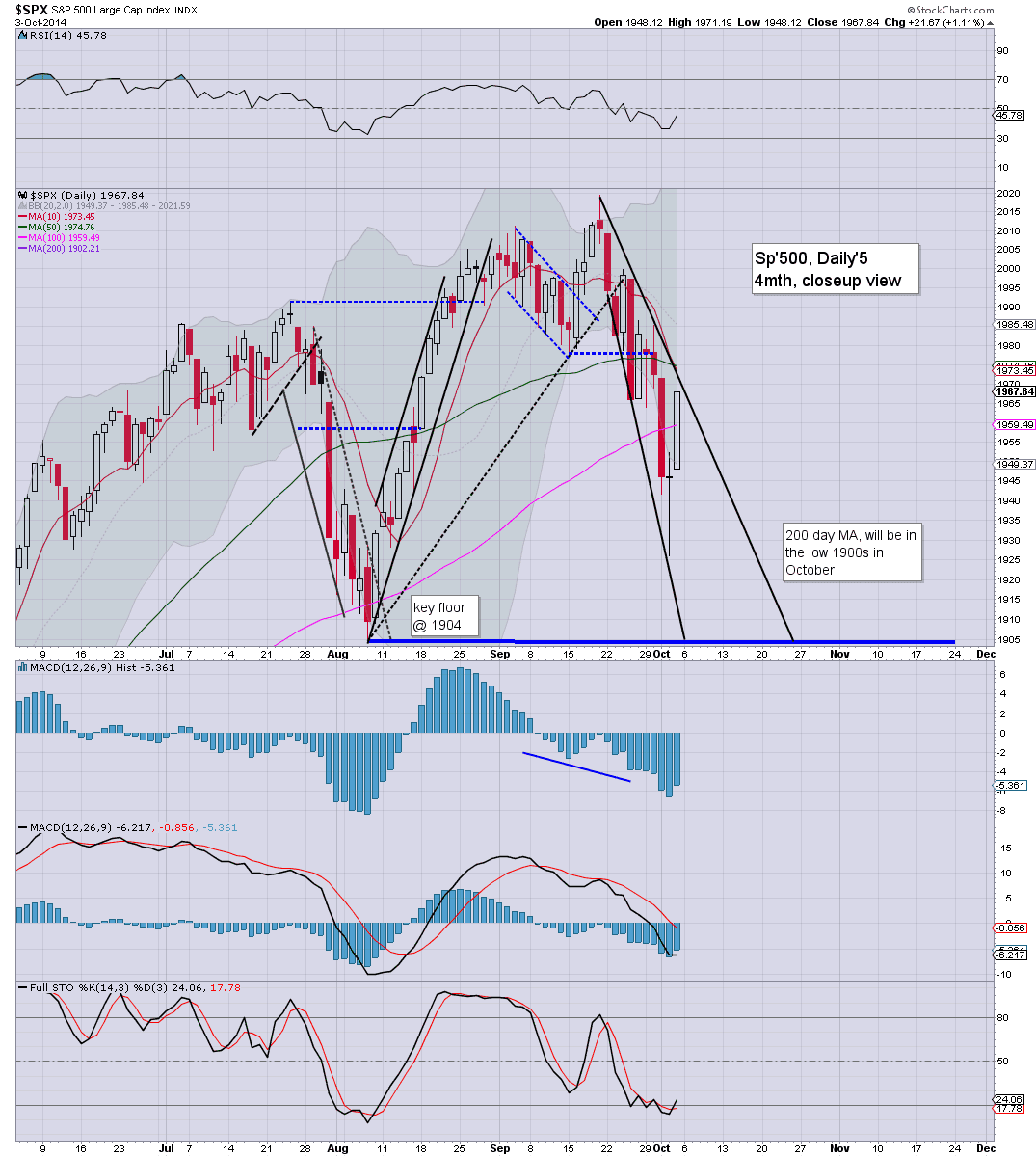 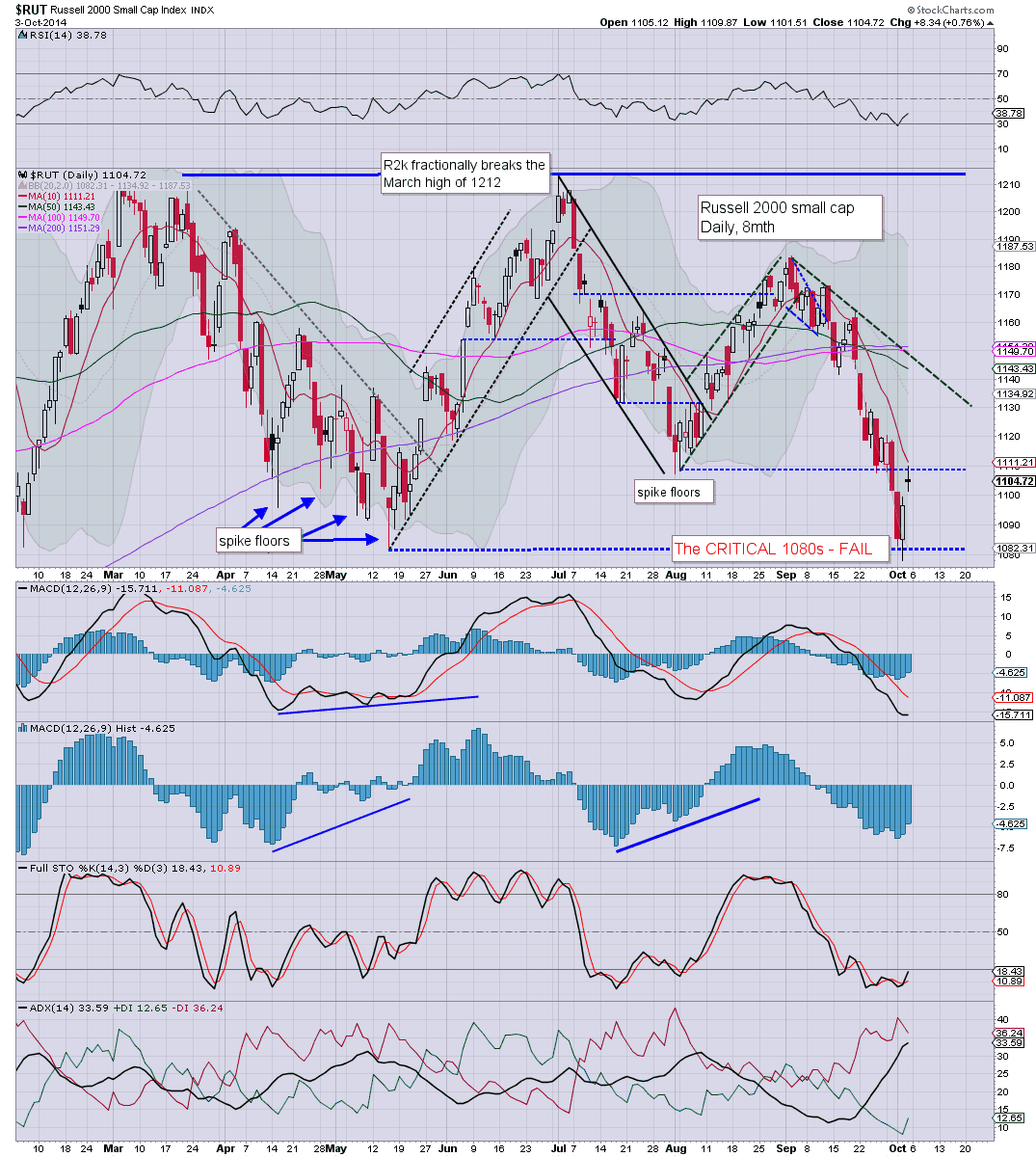 Suffice to say...a second day for the bulls, but.. with net weekly declines for all the main US indexes.
--