The US indexes have started the year with some weak price chop, but the broader upward trend remains intact. Upside targets into the late spring remain - sp'1950/2050, with Dow 17000/500. The only issue is how big a correction do we get this summer/autumn, not 'if' we get one. 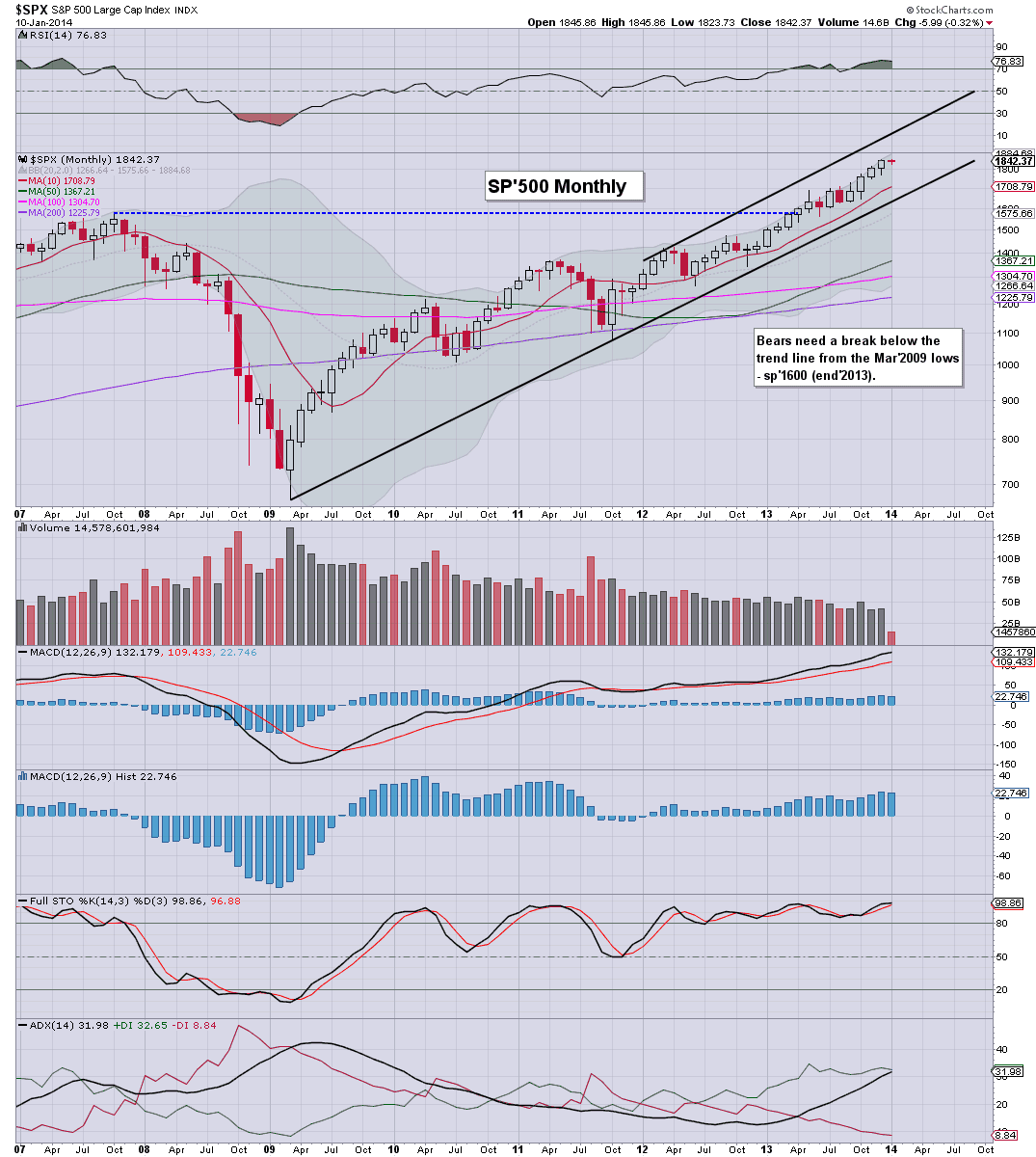 The upper bol' on the monthly chart is offering the 1880s in the immediate term, and that remains best bullish upside for this month. We're seeing the market ceiling rise by roughly 40/50pts a month. By April, the low 2000s will be a viable target. Underlying price momentum remains very strong, and there is probably another 2-4 months of upside..before this market concludes the giant ramp from Oct'2011 - when the sp' was a mere 1074. 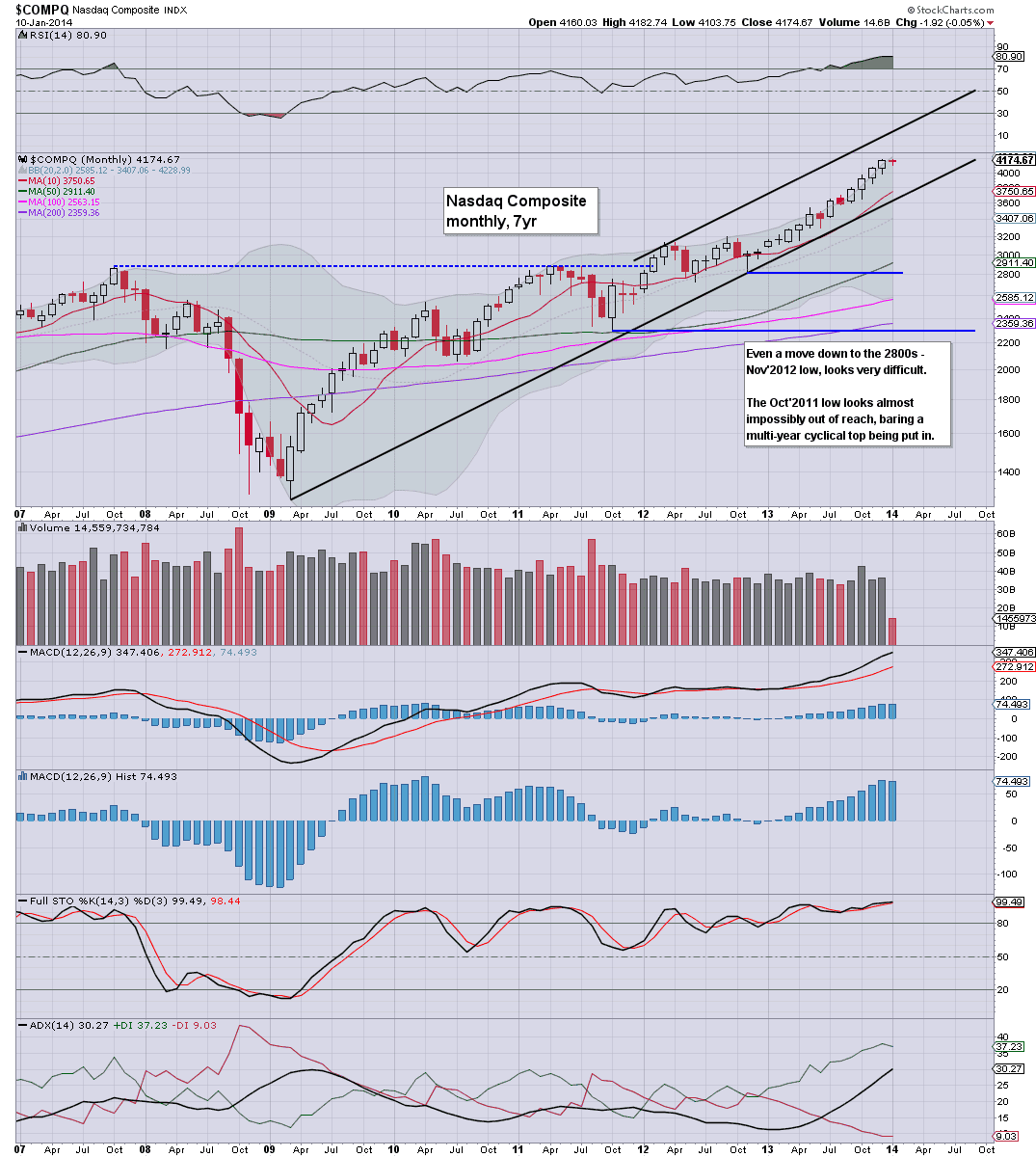 The tech' looks set for the 4200/300s in the near term, with perhaps 4500/750 by April/May. I do not expect the March 2000 high of 5132 to be tested/broken until at least early 2015. Underlying price momentum remains extremely positive, and even if prices rolled over from here, the MACD won't go negative cycle until the early autumn. 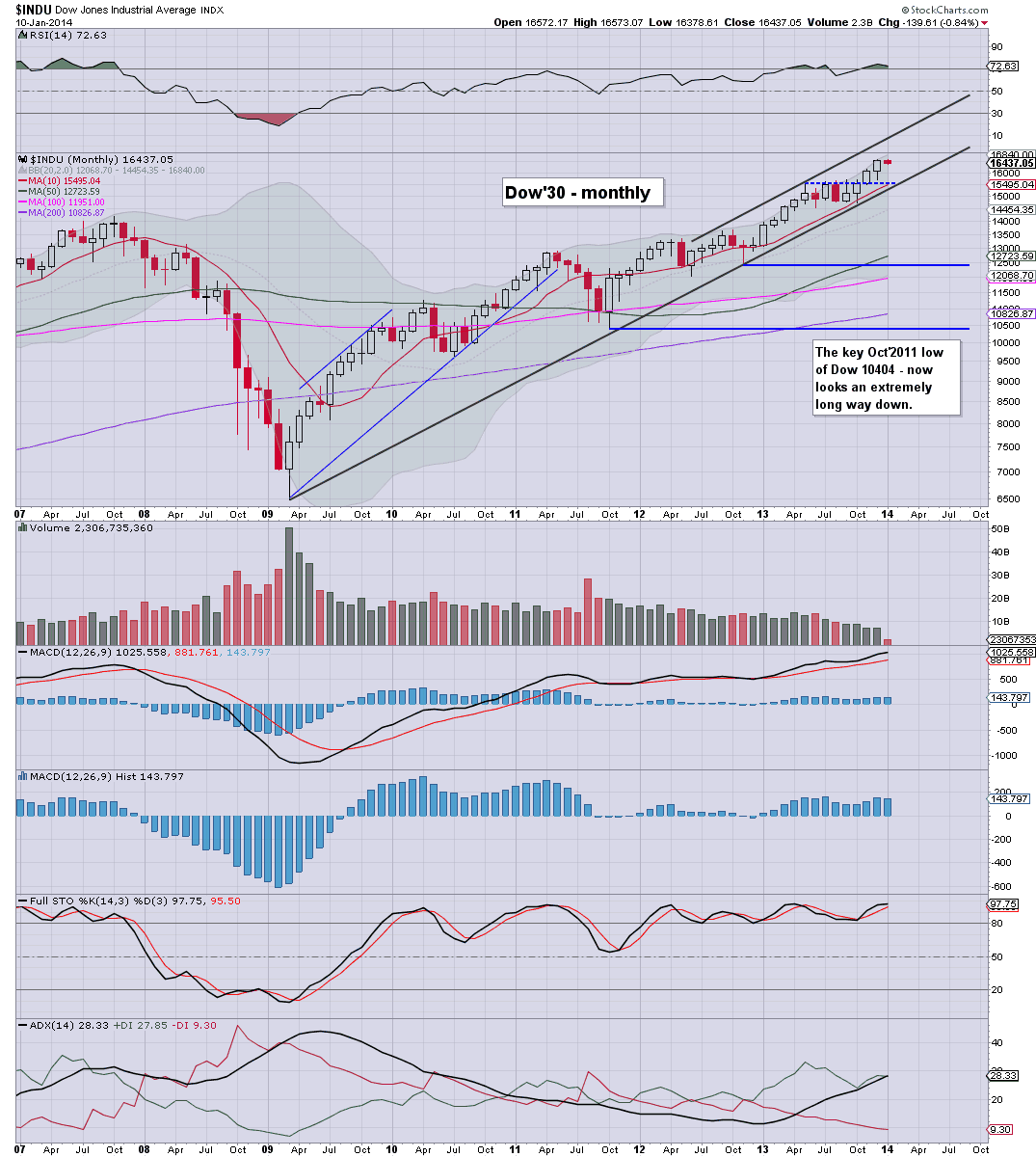 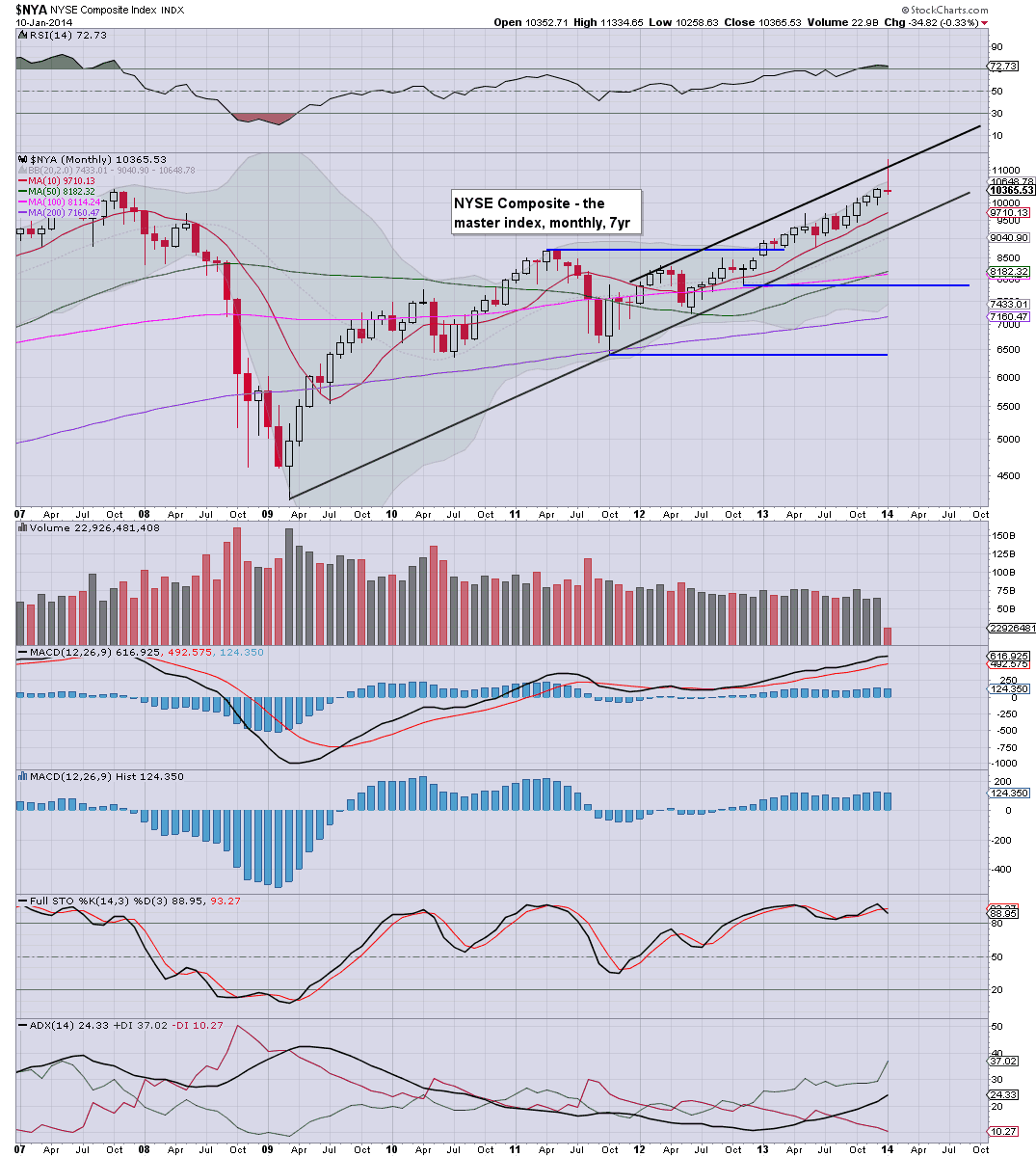 **There was a very anomalous/rogue spike this week. Dare I suggest, are the algo-bots offering a clue as to where we are headed? For the regular readers out there, you will already know, my late spring target was indeed for the low 11000s, and it is 'curious' to see the spike of 11334. 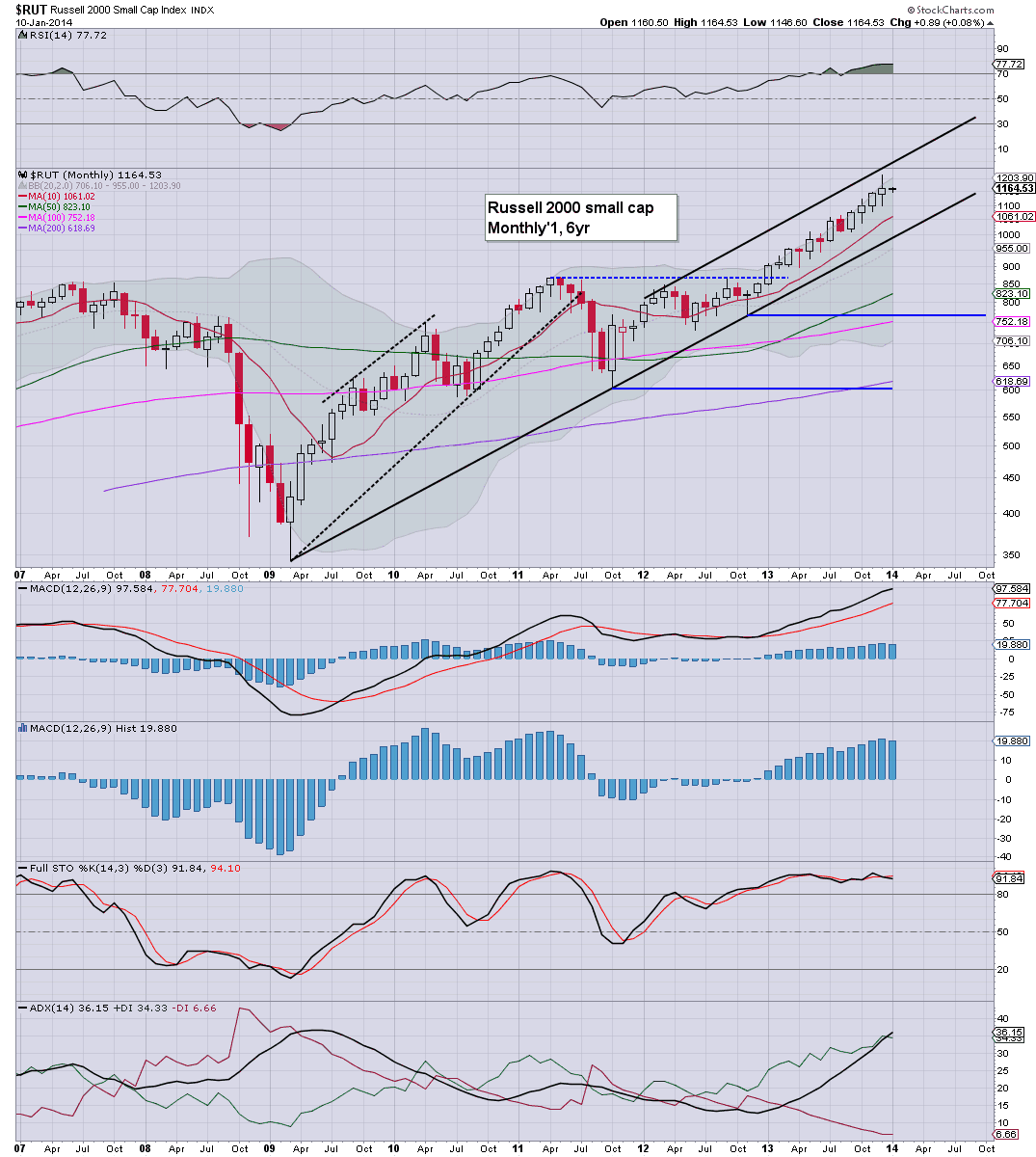 The second leading index looks set for the 1200s..if not the 1300s by late spring. From there, I will looking for a very natural retracement, all the way back down to the 1000 level by late summer/autumn. 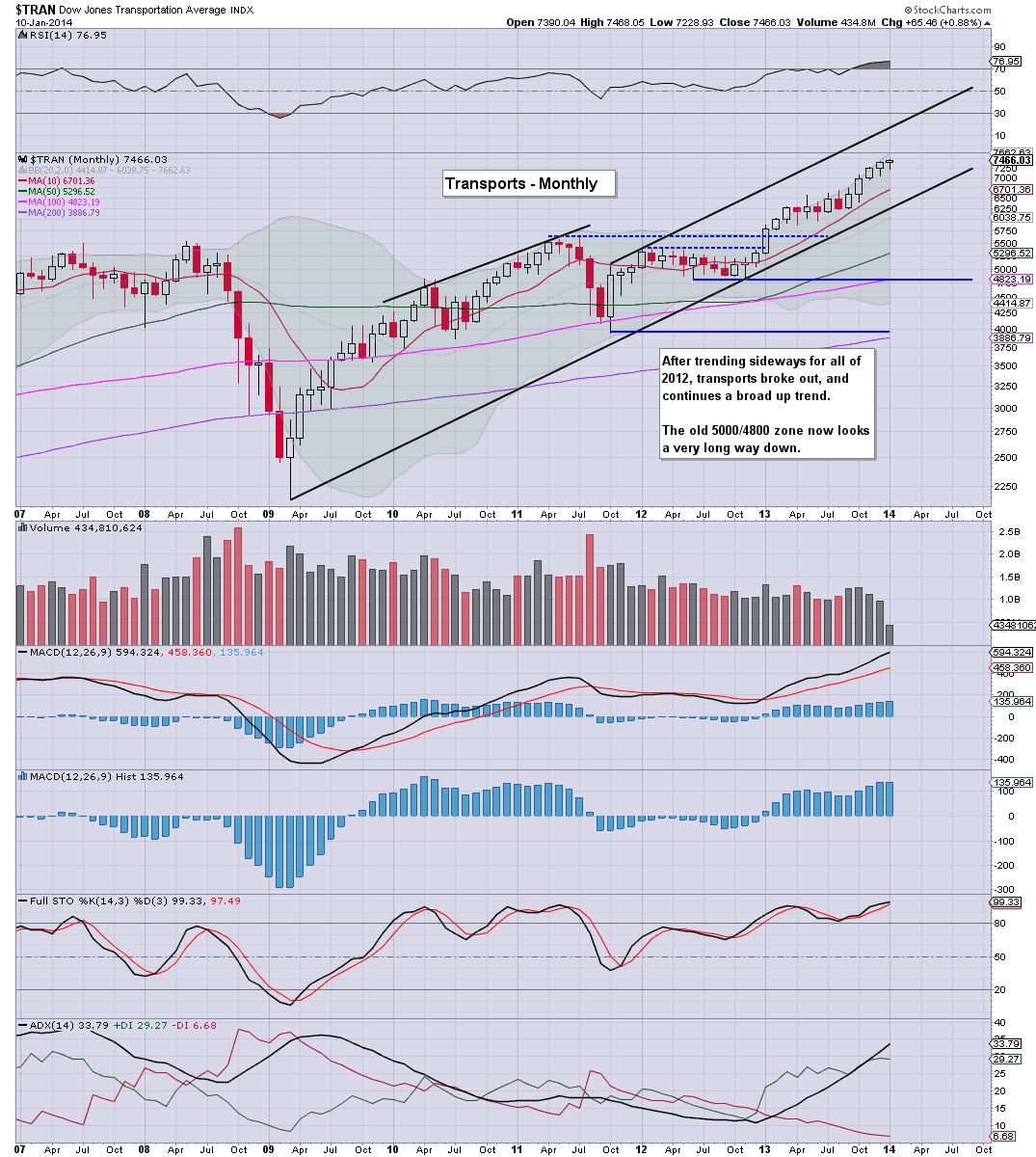 The old leader is still leading, and is already holding moderate gains of 0.9% this month. The 7600s look viable in the immediate term..before a minor drop into mid February. By late spring, the 8000s are looking just about possible. The transportation stocks are especially benefiting from the lower oil prices, and so long as Oil remains <$100, the tranny looks set to out perform most other indexes.

So..we're now 7 trading days into the year, and broadly..it has been largely minor weak chop. The one standout is the transports, which is continuing to lead, and warn of further upside for the rest of the US market.

On any basis, it looks like the original outlook is still on track. Another 2-4 months of upside..into the March/May time zone, at which point we'll probably be trading in the sp'1950/2050 zone.

Next week doesn't really have anything particularly significant. Tuesday has retail sales - which probably won't be too upbeat, yet, Mr Market sure has a way with interpreting data - as Friday showed. Wednesday has producer prices, and more importantly, the Fed beige book (2pm). Thursday has the CPI, which will probably show continued low inflation..and inspire some to believe the Fed will remain free to print at least $40/50bn a month for the rest of 2014.


Just another 2-4 months to wait

For the doomer bears - of which so few remain, there are probably no more than another few months to wait until the giant wave'3 ramp from Oct'2011 is concluded. From there, best guess is for a wave'4, similar in style to the action of 2011/1998.

If I'm right, we have a very exciting summer/autumn ahead. Keep in mind, I'm still broadly resigned to renewed upside in late 2014, with a multi-year cycle peak in late 2015/early 2016.

The main indexes settled moderately higher, with the sp +4pts @ 1842. The two leaders - Trans/R2K, closed higher by 1.2% and 0.5% respectively. Near term outlook is for the market to battle higher to the 1860/80 zone by end January, before a minor 3% drop into mid February. 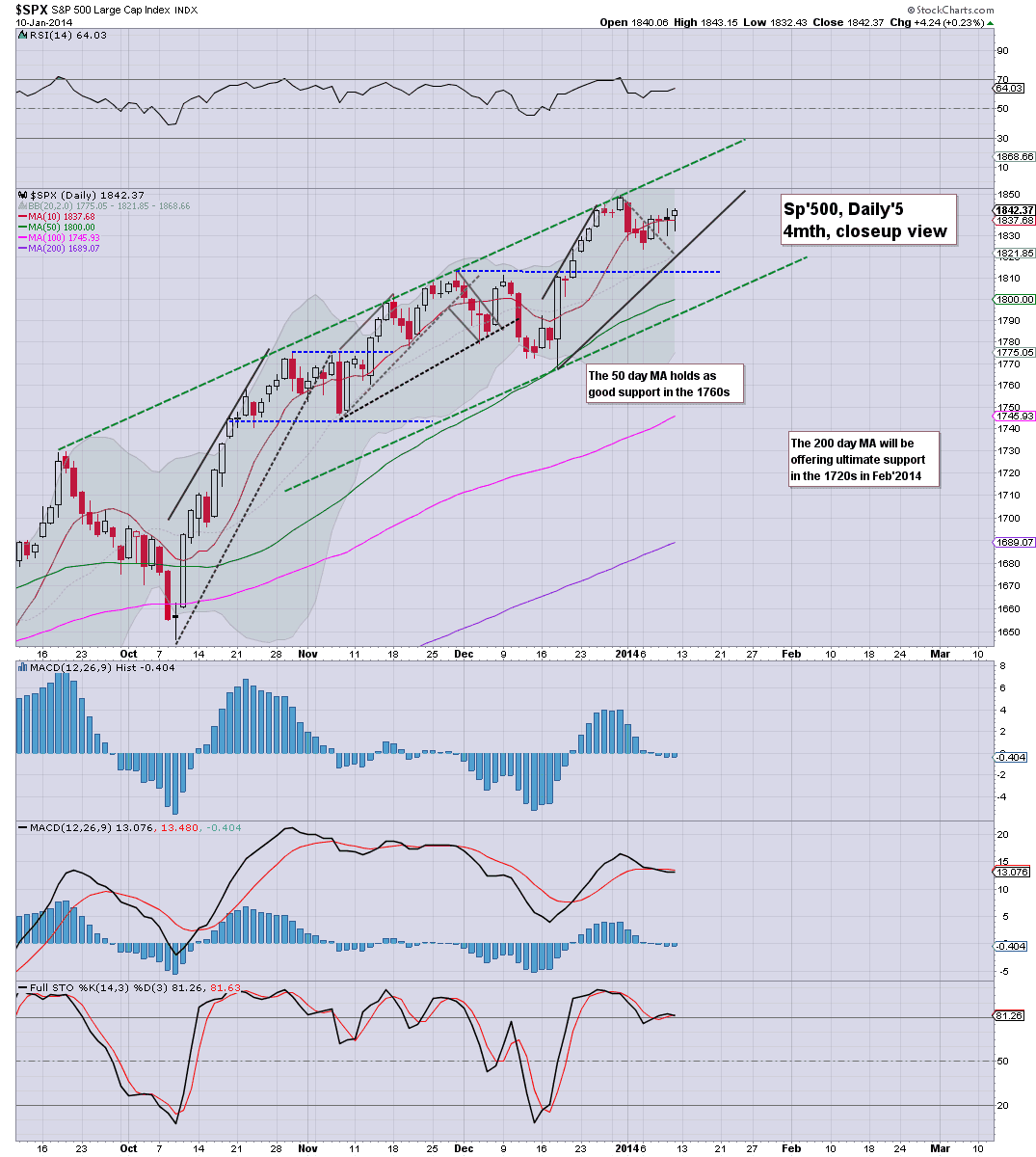 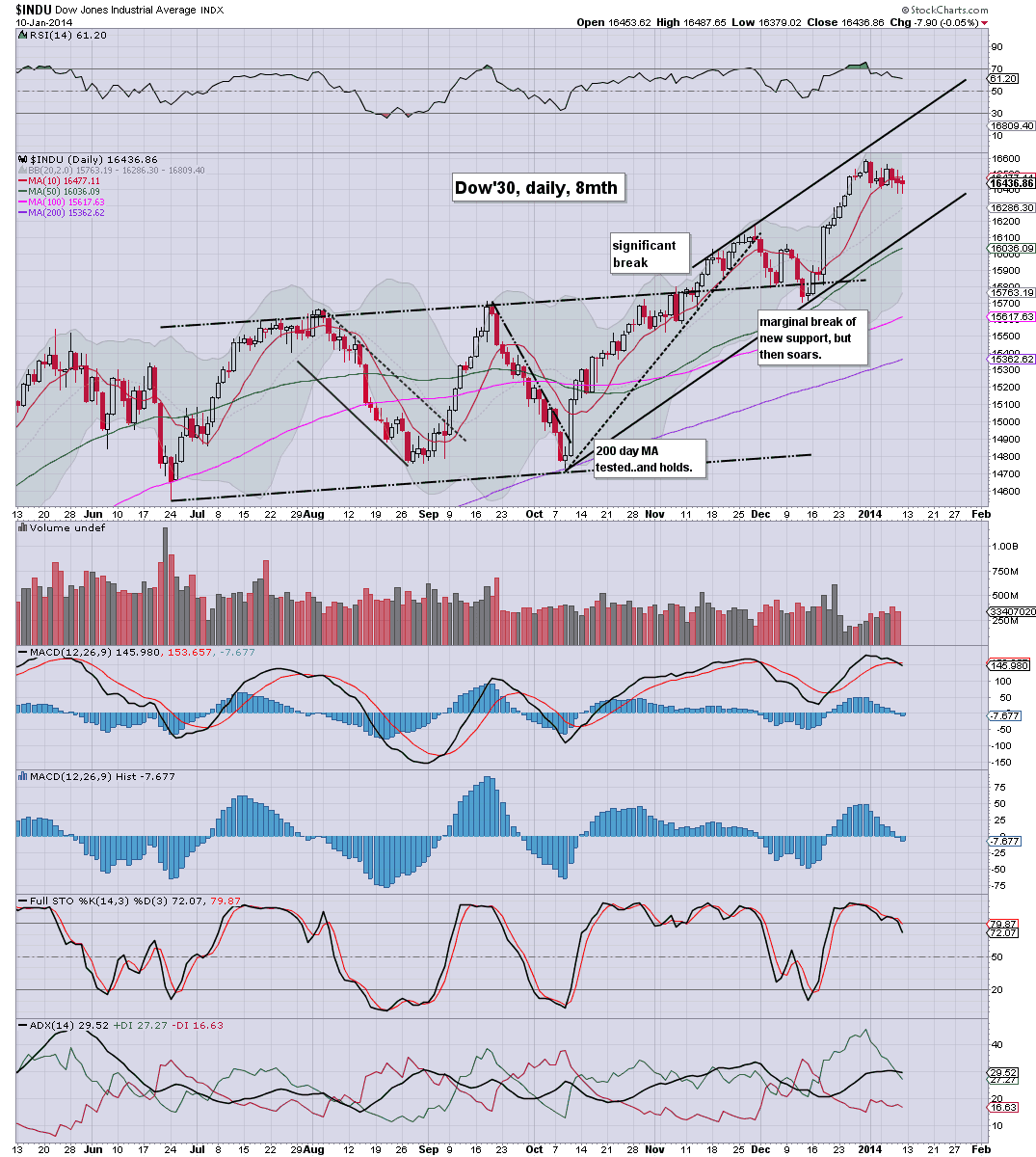 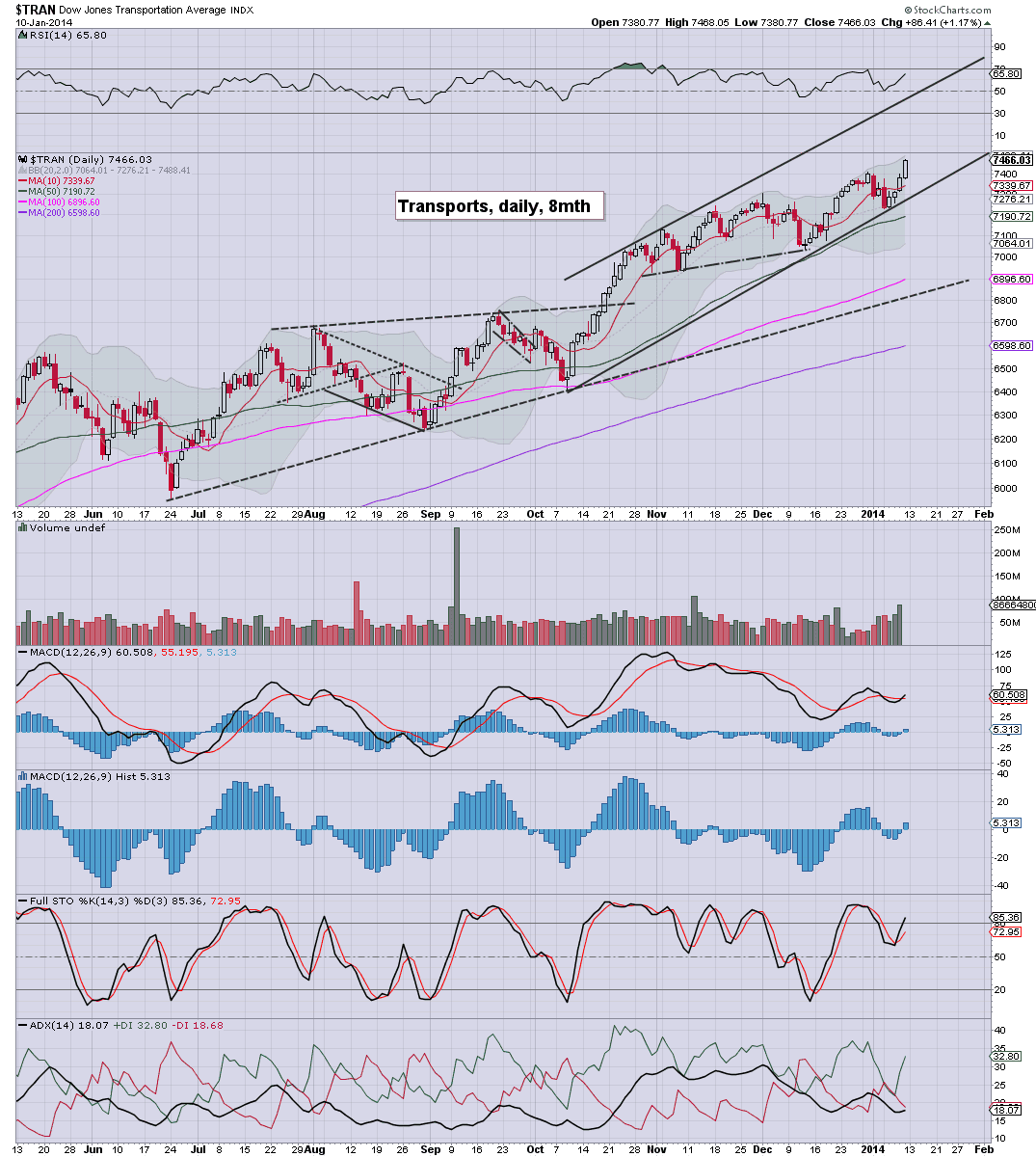 Little to add. We have clear bull flags on most of the main indexes, and market looks set for a further 2-3% into end January. As is often the case, the 'old leader' - Transports, is leading the way higher.

That's all for this week, thanks to those who commented this week, if only to say hello.

Goodnight from London
-
*the weekend post - late Saturday, will be on the US monthly indexes
-

Video from Schiff - an imaginary recovery does not create real jobs

Indeed.  I just wish Schiff would quit the 'dollar doom' nonsense talk.The USD will be one of the last to fall, there are plenty of other currencies that will first catch fire, namely the Euro and the Yen.
Posted by Trading Sunset at 01:00:00
Email ThisBlogThis!Share to TwitterShare to FacebookShare to Pinterest
Newer Posts Older Posts Home
Subscribe to: Posts (Atom)