Whilst the broader equity market saw some slight choppy weakness, the VIX slipped lower into the weekend, settling -2.7% @ 13.84  Across the shortened week, the VIX gained 11.1%. The VIX looks set to remain under the key 20 threshold until at least late January. 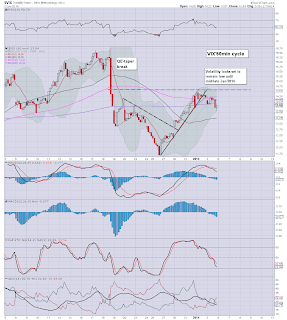 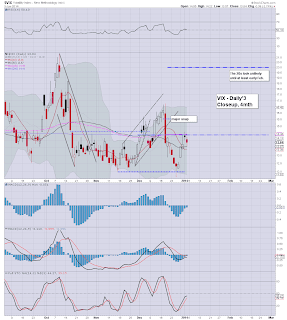 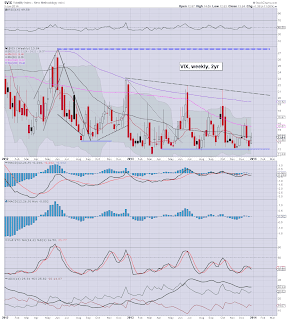 VIX looks set to remain low, and there is even the small possibility that the VIX won't break back above 20 until the late spring/early summer - which would be extremely incredible.

My primary market outlook is for an intermediate top this spring. If that is the case, I'd be looking for VIX - at least briefly, to spike into the low 30s. The only issue is whether 40s are viable if the market gets seriously spooked by something  - such as a geo-political crisis (China/Japan?).
-

The main indexes closed the week, moderately mixed, with the sp -0.7pts @ 1831. The two leaders - Trans/R2K, both settled higher by around 0.5% Regardless of any minor weakness early next week, there looks to be continued broad upside into mid/late January, to around sp'1860/80. 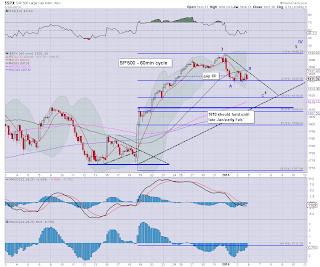 A short week...and that makes for two trading days complete of 2014!

However we open next Monday, the bigger weekly/monthly charts most certainly are still offering somewhat higher levels.

Thanks to those who commented this week, it is good to hear from some of you out there! The usual bits and pieces across the evening.

Have a good weekend everyone!
-
**The weekend post will be on the World monthly indexes.
Posted by Trading Sunset at 21:01:00
Email ThisBlogThis!Share to TwitterShare to FacebookShare to Pinterest 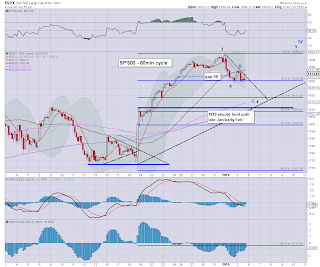 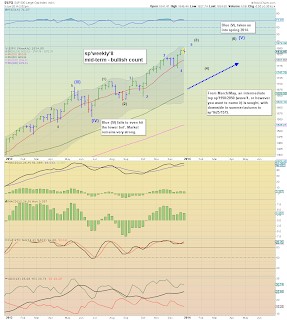 A short week, but I'm kinda tired...just one hour to go!


3.14pm  sp'1836..a close in the 1840s would be something of a surprise, but then..underlying pressure remains up...and is exactly why I won't be meddling on the short-side until the spring.


3.25pm.. VIX -4.5%...showing a fearless market..doesn't bode well for the bears holding short across the weekend.

Certainly, it looks a seriously risky situation for anyone to hold short across the weekend, with downside, at best..maybe 1812/10..if not only 1820/18.


3.56pm...chop chop..as expected........ back at the close.
Posted by Trading Sunset at 19:52:00
Email ThisBlogThis!Share to TwitterShare to FacebookShare to Pinterest

The market is seeing continued minor chop into the weekend, with the sp' in danger of losing the 1830s, not that it is a 'mission critical' level. A drop to 1815/10 early next week is viable, before a renewed strong push higher. Metals are holding gains, Gold, +$12, whilst Oil is weak, -1.7% 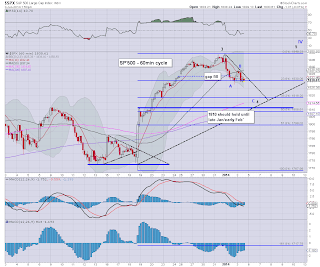 *I've added a fib retrace to the hourly.

As noted earlier, it is a bit of a mess, but overall outlook looks reasonably solid, with a move into the 1850/60s by mid month.
-- 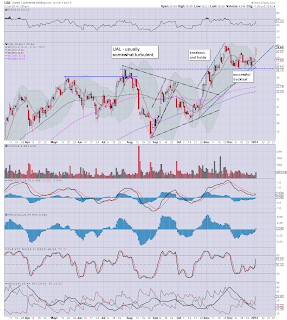 
2.04pm.. UAL about to break $40 for the first time since Feb'2008.
Posted by Trading Sunset at 18:51:00
Email ThisBlogThis!Share to TwitterShare to FacebookShare to Pinterest

It remains a bit of a muted mess to end the week, with Dow/SP a touch higher, but with a weak Nasdaq - not helped with AAPL -1.7%. Metals are holding moderate gains, Gold +$12, whilst Oil remains very weak, -1.1%. 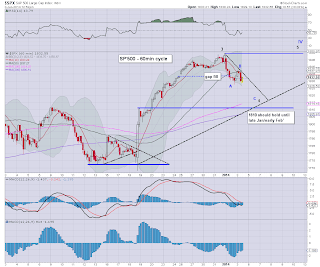 The break levels are pretty clear....

The point should be clear...risk of minor downside, but broadly..we're still headed higher.

I have to say, its arguably crazy for anyone to be attempting to trade these tiny little down moves. So damn difficult to time, and there is always the threat of low vol' algo-bot upside melt. 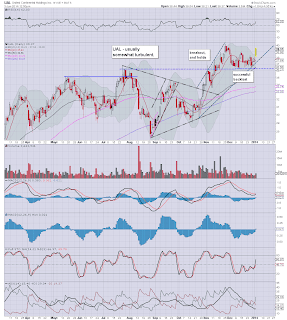 Primary upside target is $48 - the old 2007 double top.
Posted by Trading Sunset at 17:53:00
Email ThisBlogThis!Share to TwitterShare to FacebookShare to Pinterest

The market has got stuck at sp'1838, and it would seem the sub'4 will take at least another day to complete. Downside is the sp'1815/10 zone, no later than early Tuesday. Metals are holding gains, Gold +$12, whilst Oil remains especially weak, -1.1%. 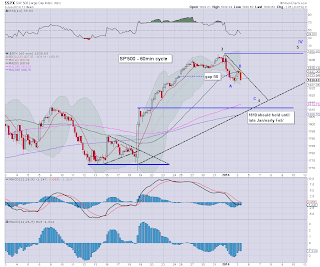 These retracement waves are often tricky..and it now looks like we'll see further moderate weakness into next Monday.
-

Most important though, higher levels still look a given by the end of next week, when everyone should have returned from their festive holidays.
- 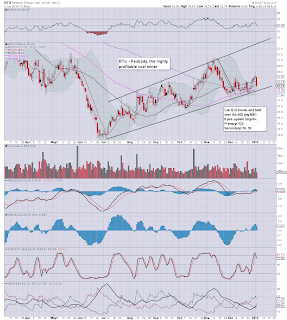 AAPL, -1.8%, in the $543s.
Posted by Trading Sunset at 16:50:00
Email ThisBlogThis!Share to TwitterShare to FacebookShare to Pinterest

11am update - market holding together

Despite the mild concern from even some bulls yesterday, at the yearly opening weakness, Mr Market looks comfortable in the sp'1830s. The only notable weakness is in Oil -1.1%, but hey, aren't lower energy prices bullish for the broader economy? Metals build gains, Gold +$12. 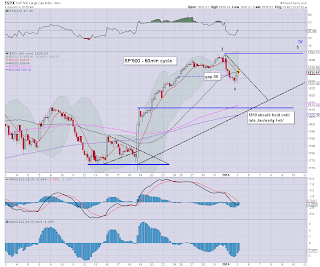 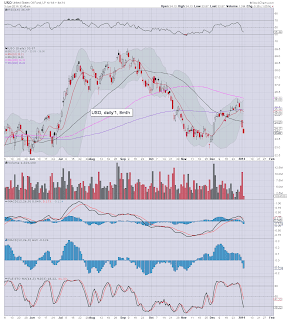 *I suppose you could count the current micro wave up as a B', of an ABC sub'4, but whatever....the broader trend looks higher for another week or two.
---

Well, at least the first two trading days of the year have not been dull. There is plenty of price movement going on for those that look around a bit.
-
*despite the market gains, Ford remains weak..as expected, and those low 14s look viable at some point in the near term.

US equities look set to end the week with some gains. Any weekly close in the sp'1830s will be enough to keep the broader up trend on track. Metals are trying to build gains, Gold +$7. Oil is weak though, -0.4%. 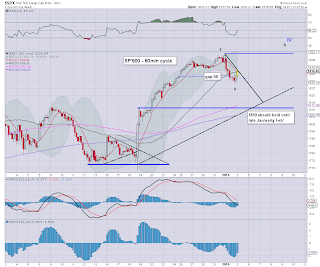 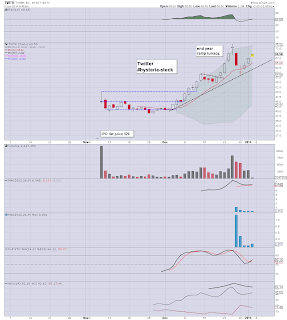 *looks like the bull maniacs are looking to close TWTR in the $70s this week.
--

So..we have a market that wants to rally into mid January...probably to the 1860/80 zone. With the QE starting again next week, bears face the usual problem.


10.03am... weakness in Ford, and the coal miners. Apart from that though, market looks reasonably strong.

*clown finance TV highlighting that the Fed officials are due to start speaking soon, no doubt..Mr Market will be looking to ramp on any comments.

Rest of the market is holding together though..kinda.
Posted by Trading Sunset at 14:52:00
Email ThisBlogThis!Share to TwitterShare to FacebookShare to Pinterest

Good morning. Futures are moderately higher, sp +4pts, we're set to open at 1835. Precious metals continue to climb (but still below broken support), Gold +$6, Silver +0.6%. Hourly index cycles offer upside into the Friday close, if not all of next week. 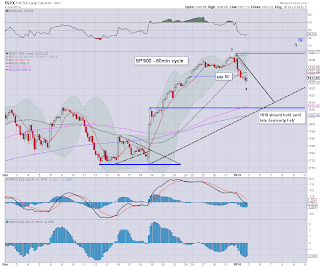 *as I type, the big city is almost night at 1pm, we have floods, and lightning bolts are raining down, a crazy winters day!
--

So..we're set to open a little higher. Frankly, the bull maniacs should be content with any weekly close above 1835.

As it is anyway, I've little doubt we'll see the 1850/60s within the next week or two. For me, the only issue is whether we see 1870/80s, before things really do get overbought by mid/late January.
--

*be mindful of the Fed officials speaking today, comments could easily be used as an excuse to ramp on the recognition that QE is not going to fully end for some considerable time.

9.33am.. and we're off and running!  Would get interesting if we can break back into the 1840s by the early afternoon. Certainly, the underlying pressure will be up into next week.

DRYS +2%,,  VIX -1%..set for a weekly close in the 13s.
Posted by Trading Sunset at 13:15:00
Email ThisBlogThis!Share to TwitterShare to FacebookShare to Pinterest

A dynamic market year ahead

US equities should see some pretty dynamic price action this year. Rather than the broad straight up ramp of 2013, the market has a very high probability of seeing a 2-4 month down wave. First of all though, there is probably another 2-4 months of upside to go. 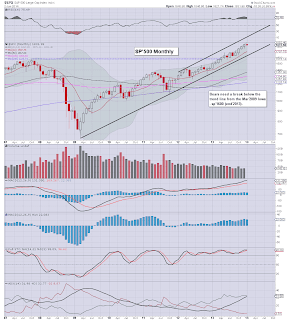 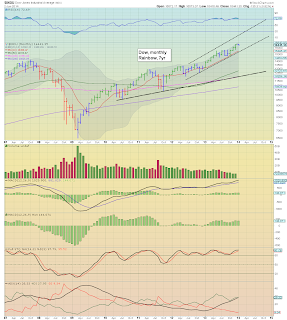 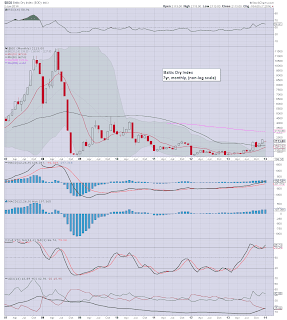 A 7% drop in the BDI to start the year, but there seems high likelihood that the BDI will battle into the 3000/3500 zone this spring, perhaps even the 4000s, before collapsing in half by late summer. This chart, as I will keep highlighting, has huge implications for the shipping stocks, most notably, DRYS.

*a poster was asking about my outlook on the DAX.....and yes, I do take requests! I will also be covering the usual ten world indexes this weekend.
-- 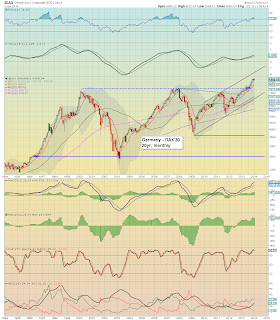 Germany remains the powerhouse of the EU, and without question, its fiscal position is better than the USA. The only problem is that unlike the US - which has the Fed to print endless money to fund any deficits, Germany is unable to directly finance itself via the print key, since it is part of the Euro currency.

Despite starting the year with a somewhat significant fall of -1.6%, the monthly charts are very much offering the big 10k level by the late spring, before an anticipated 10/20% fall this coming summer/autumn.

There isn't much due tomorrow. Just vehicle sales, and the Oil and Gas reports. However, there are no less than four Fed officials speaking, including the Bernanke. Don't be surprised if a few comments are used as an excuse by the algo-bots to kick the market around a bit.


A long..and tough year ahead

Tomorrow will again likely be somewhat muted, as many traders are still on holiday. Things really won't get going until next Wednesday when we have the FOMC minutes, and followed by the monthly jobs data on Friday.

The year ahead though is surely going to be another difficult one (when isn't it?). My best guess is that the market is desperate for a major shakeout move, and that we'll see a major wave lower once we are past the spring. I'm still resigned that the next major equity collapse wave of 40-60%, is still a good 2-3 years away. I realise many sure won't like hearing that, but that is how I currently see things. 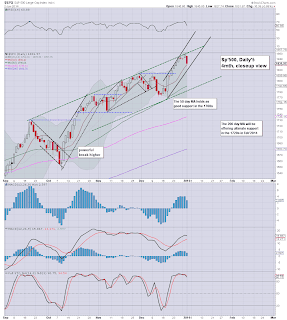 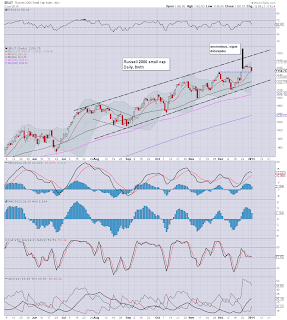 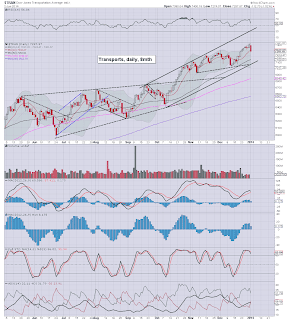 A new year begins, and the markets open a little lower. Certainly, it is nothing for the bears to get overly excited about.

Arguably, for those who are still aching to short the indexes, the only reasonable entry level will be somewhere >1860..if not 1880. Even then, downside might only be 60-80pts - as was seen in the September down wave.
--