Whilst the many doomers continue to talk about everything from the next 'imminent' flash crash to WW3 in March, the main market had a broadly up day. Again, every minor down cycle is being bought up.

Notably. again though, both IWM and the Transports are failing to share in this 'to da moon' adventure. 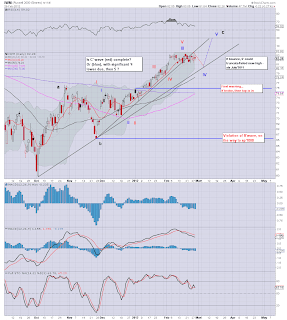 Mr VIX is still primed for some kind of very short term mini-surge. It would be a classic cruel tease to the bears to see VIX hit the 23/25 range...-with sp'1320/00, only to then max out, and decline all the way into late April, maybe even setting a new low of 14/13. 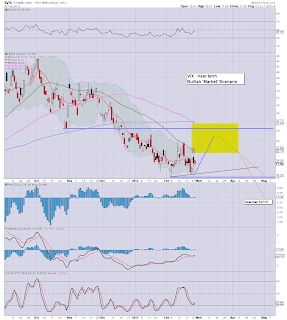 Silver had a very strong day. It is clearly having a strong upcycle on both the daily and weekly cycle. From the biggest perspective, the 20 year chart shows that Silver is either in a mid-term decline to 20, or is already in a bull flag, and is about to break into the 40s. Regardless of which, the long term trend is..past the moon and into the next Galaxy. Silver remains the ultimate trade of the century.

Arguably, if we see Silver over 43/45...its going to make a third attempt to break the big $50 level, and I'd guess it'll manage it. In which case, all sorts of things might start to happen as the metal-bears cause a very severe stop-cascade upward into the 60s, even 70s by late May. 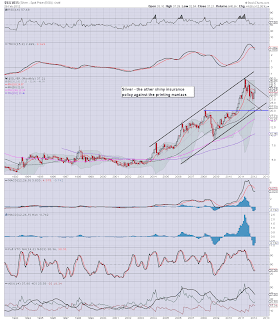 We have more econ-data - the GDP (probably revised a touch lower), and Benny will be addressing the house financial services committee - which will get near blanket coverage on the clown channels.

*news today that the board will sit this Thursday, and decide if the CDS can trigger. Will they consider a near 80% cut in the bond value as a default, or will they pretend (at the behest of the ECB) that its all still fine and dandy in EU bond market land?

good wishes
Posted by Trading Sunset at 22:37:00
Email ThisBlogThis!Share to TwitterShare to FacebookShare to Pinterest

Being a Permabear has never been easy. Its not something I wished to be (does anyone really like to be pessimistic about things?), the fundamentals are clear for the western economies, they are frakked. We are traders though, even in this walking-dead market, there will be up-cycles.

I've read around so much recently, and a scenario which I myself also had, currently seems to be right back on target...

First..lets look at the weekly... 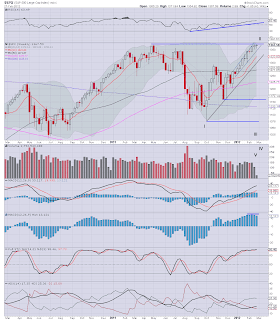 We have a channel floor/bounce target of 1320/25. The 10MA is currently 1323, and certainly offers a natural level to be drawn to. 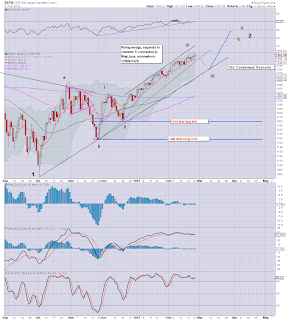 The transports - although just a 20 stock index, remains something to note, and the 'old leader'..has indeed probably been leading again - those Oil prices sure aren't helping. The Tran' has already broken way below the October low channel. 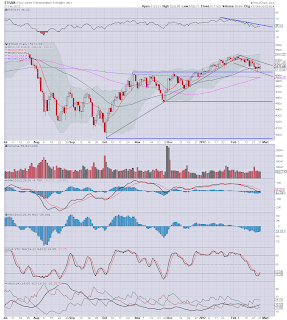 I suppose its easily possible the final wave'5 could truncate, take just a week or two to conclude, and might not even put in a higher high (ala late July 2011). That would sure make for a great short opportunity though, especially on a 3-6 month basis into year end. Jan 2013 SPY Puts anyone?

Mr Market still seems not to care. Maybe it'll care about $150 a barrel WTIC? Lets be clear though, no bear..not even the most ardent permabear can afford to attempt to ride out a move from a wave 4 retrace of sp'1300 to wave'5 completion around 1400. The doomers (myself included) - despite the endless doom-chatter, need to be even more mindful this coming March. Big down moves are coming, but from a wave count perspective, the bears may need to wait a few more months for any significant action.
Posted by Trading Sunset at 10:51:00
Email ThisBlogThis!Share to TwitterShare to FacebookShare to Pinterest
Newer Posts Older Posts Home
Subscribe to: Posts (Atom)