With equities breaking new historic highs (on some, not all) indexes, the VIX slipped to an intraday low of 13.49. However, with some Ukrainian concerns, the VIX spiked to a brief high of 14.79. Across the month, VIX saw very broad declines, falling a very severe -24%. 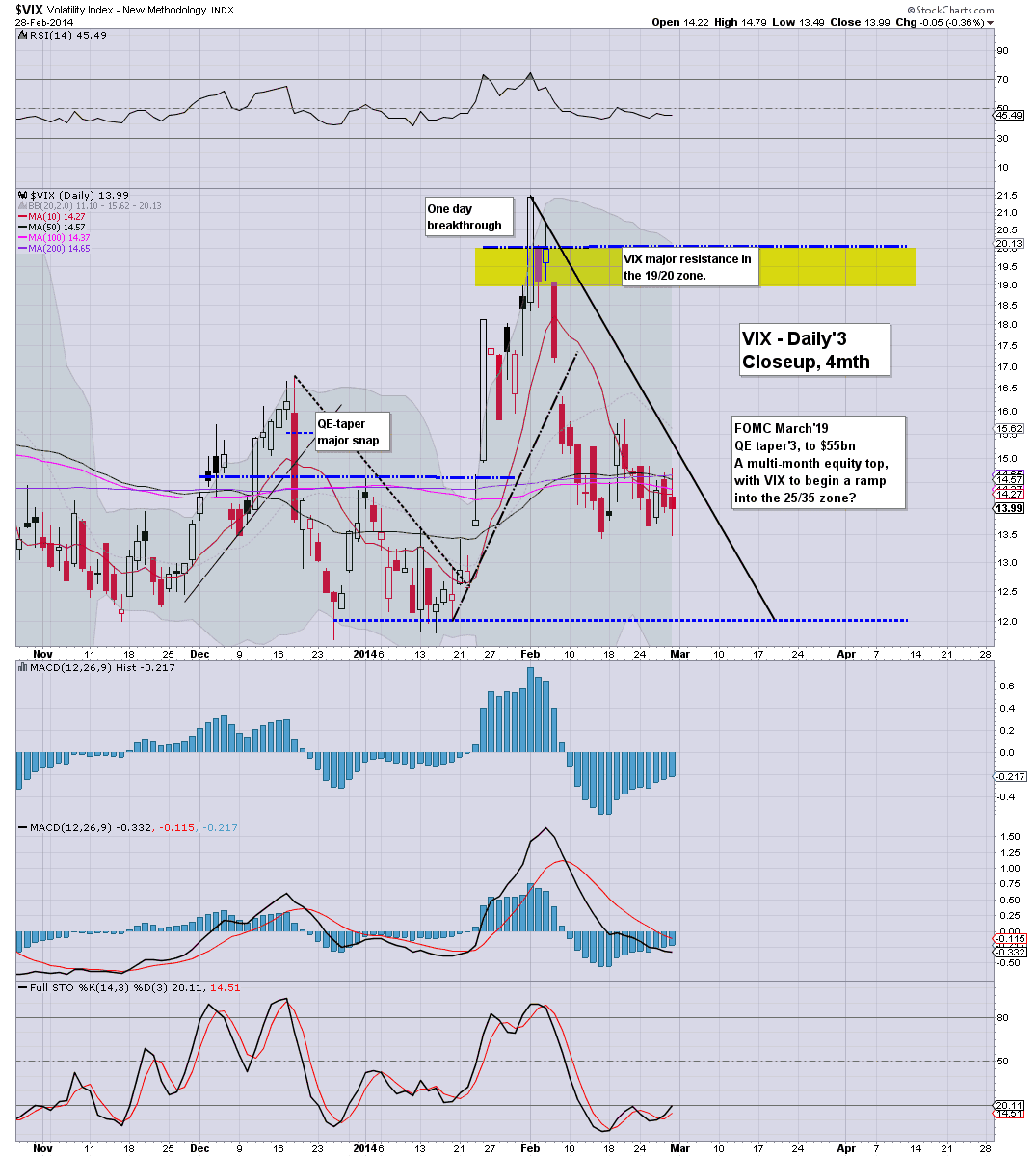 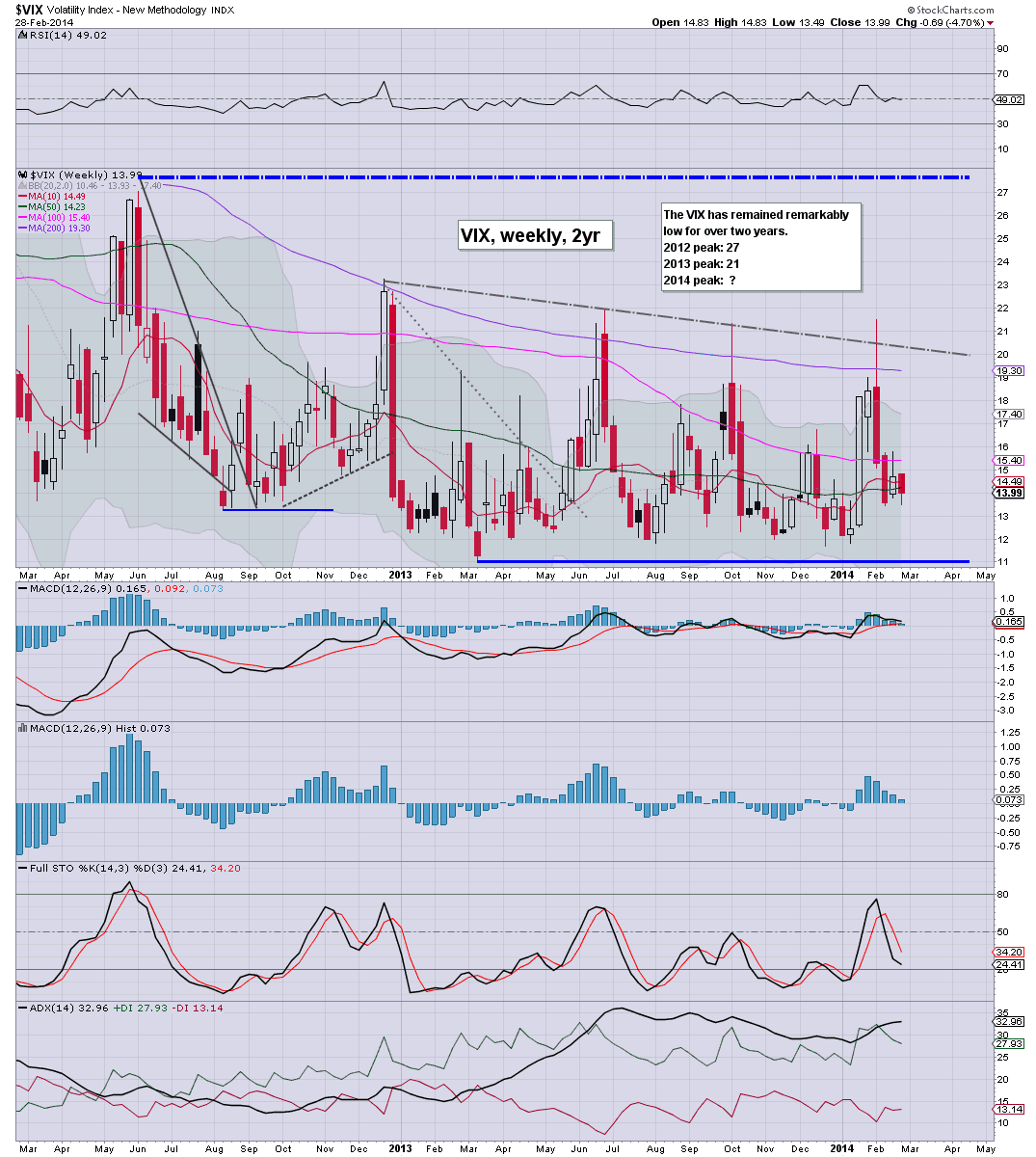 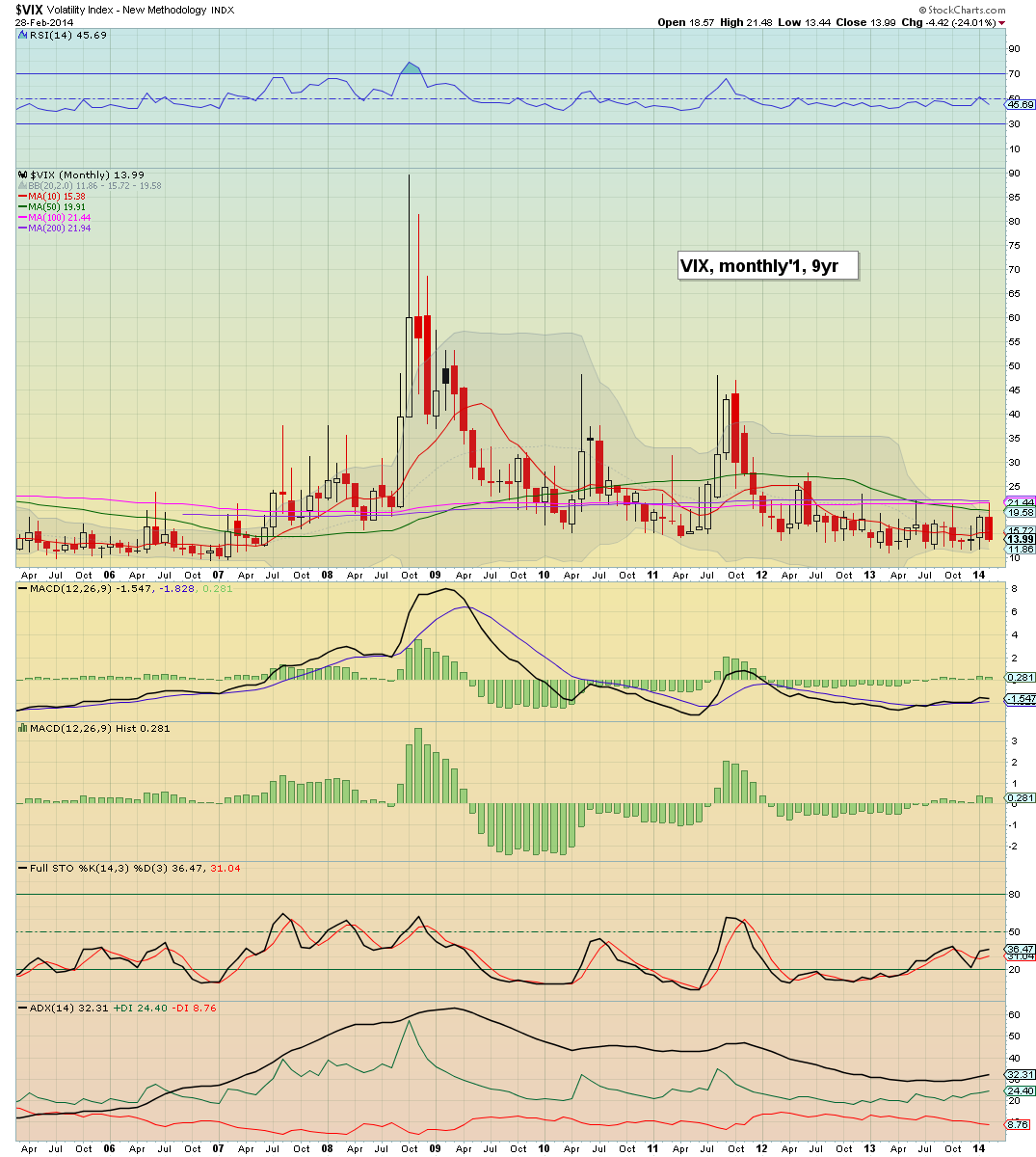 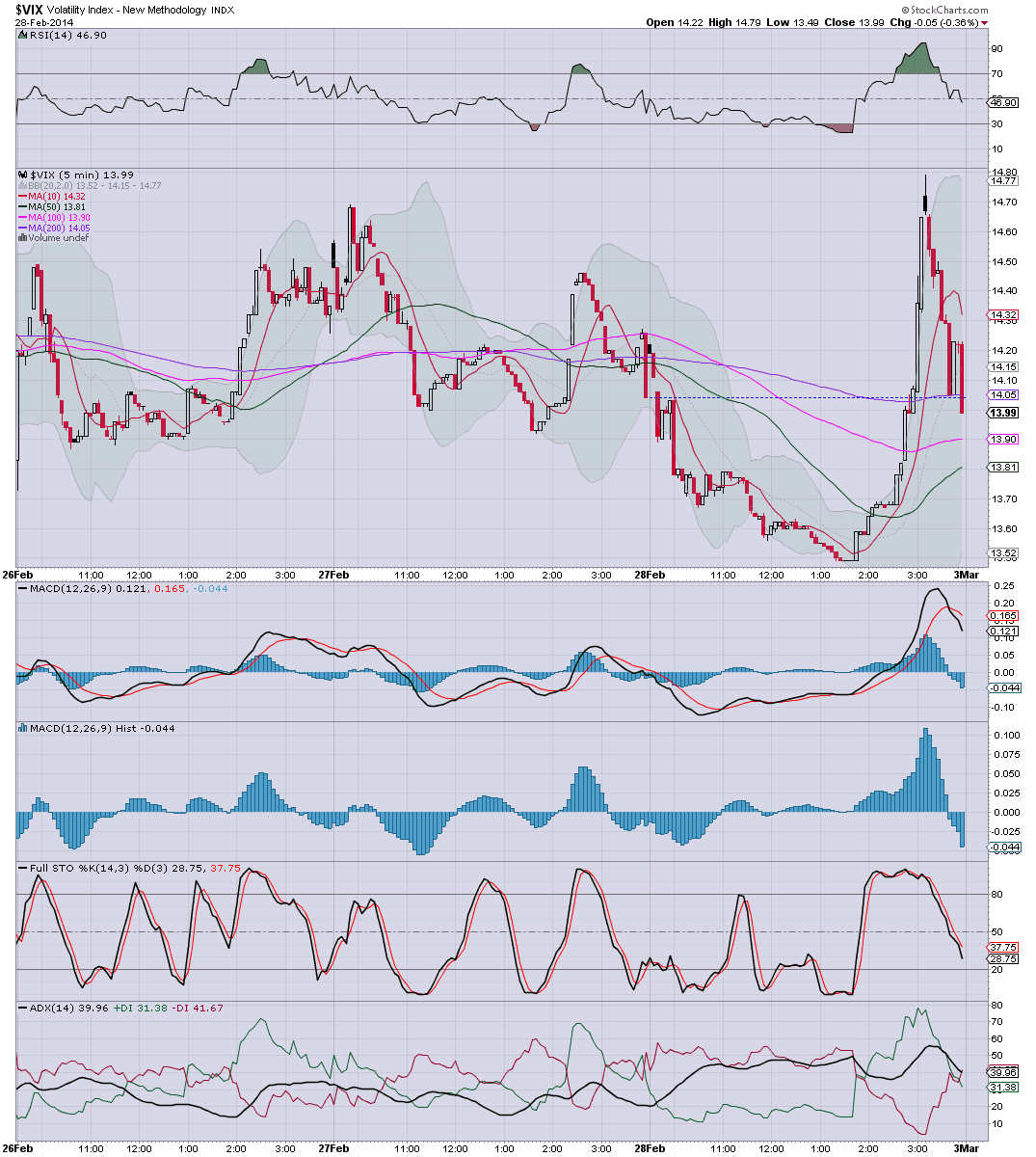 I'd not normally highlight such a small cycle, but it does illustrate the useful warning that a black candle can provide. With a spiky black candle at 3.10pm, we saw a clear peak in the VIX, and a corresponding floor in the sp' of 1847.

The fact that the VIX closed fractionally red, is not a surprise.

Overall, we've already seen the bulk of the decline on a multi-week down cycle. We'll probably slip into the 12/11s by mid/late March..before the next up wave begins.

I expect VIX >21 in the next wave - breaking the 2013 high, probably by late April.
-
more later..on the indexes
Posted by Trading Sunset at 23:00:00
Email ThisBlogThis!Share to TwitterShare to FacebookShare to Pinterest 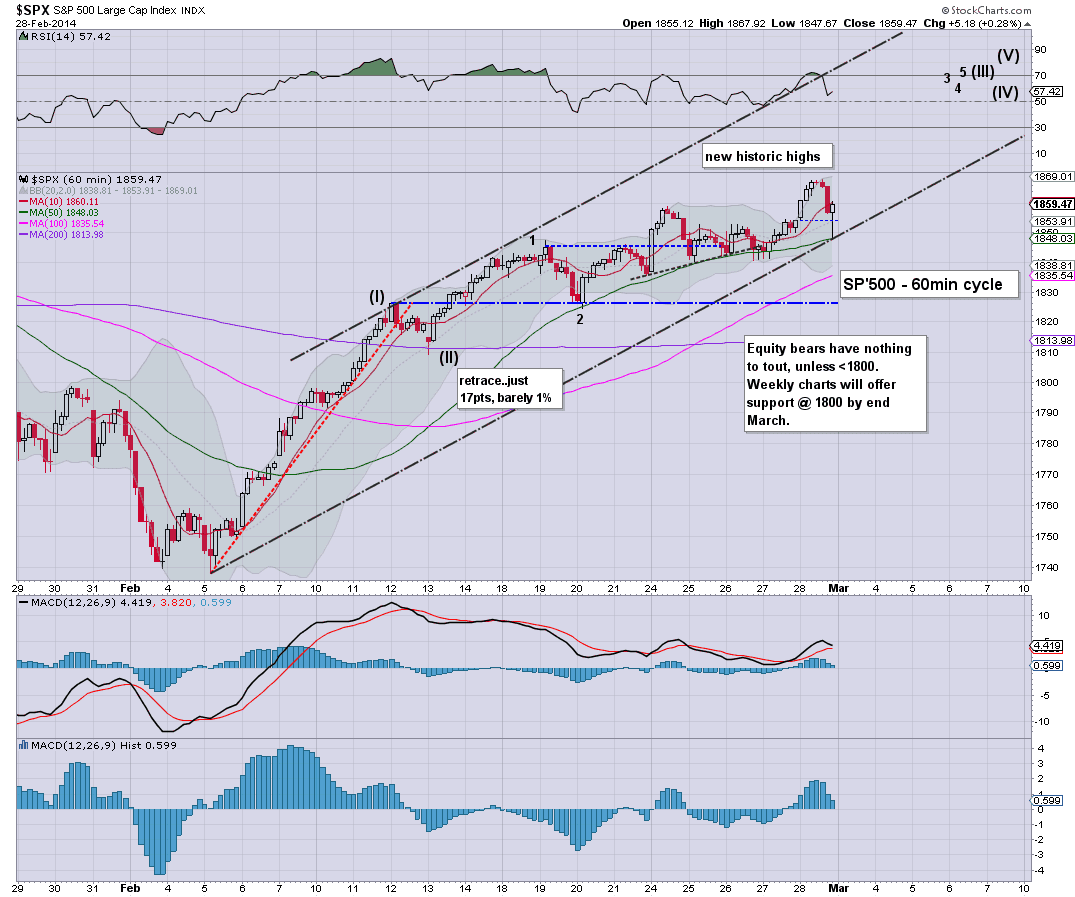 So..........that was one hell of a way to end the week. It sure has been a fair few months since we closed a Friday with that kind of intra-hour price swing.

Overall though, what matters is the bigger picture..and this is STILL looking bullish into mid/late March.
-

*As I have been noting for months..I expect the next multi-month down wave to be due to geo-political issues, NOT recessionary concerns.

I hold to the original weekly'8 outlook..and am really looking forward to seeing if the price action is primed for a key turn around the next FOMC of March'19.

Have a good weekend everyone!

--
the usual bits and pieces to wrap up the week..and the month, across the evening.

*the weekend post will probably be on the world monthly indexes

A minor down cycle this afternoon, but as has been the case for the last 17 trading days, the bears lack any real downside power. Equities look set to close with minor gains, having decisively broken new historic highs in three of the main indexes. Metals are weak, Gold -$6. VIX is back to flat. 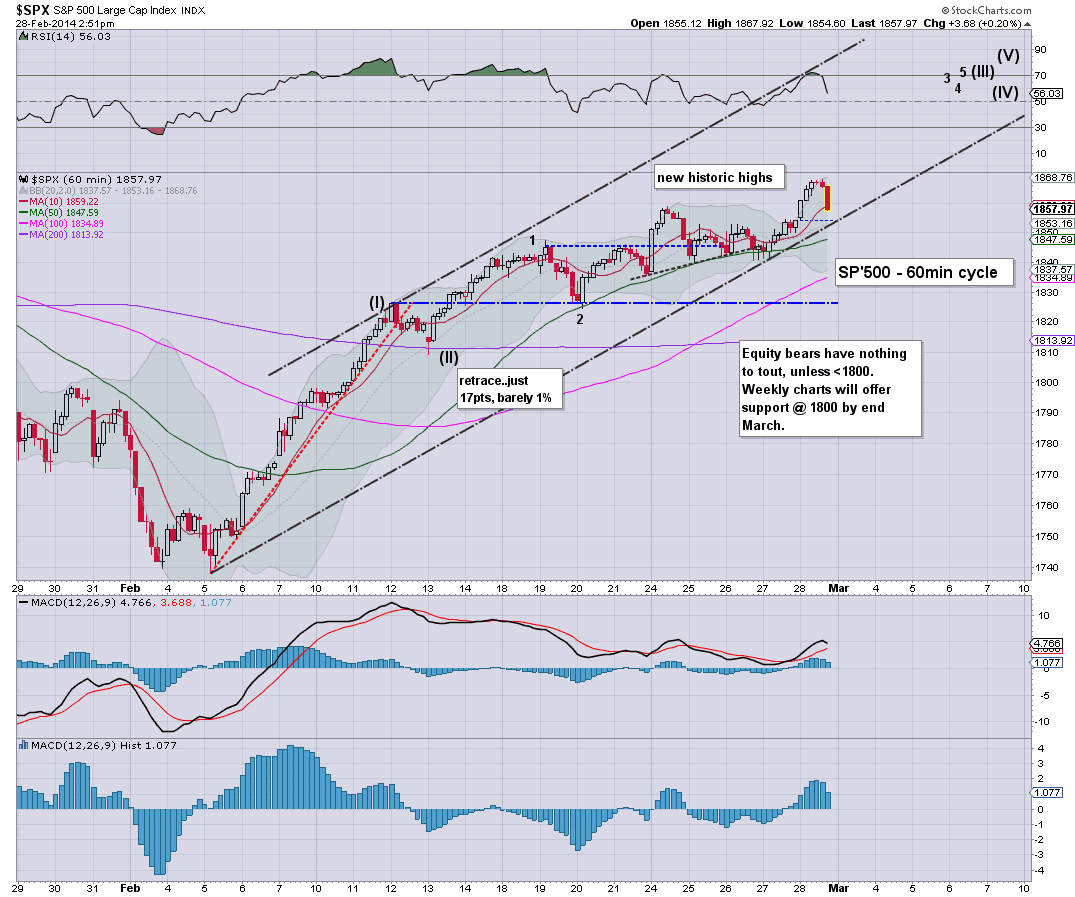 *minor down cycle, should conclude shortly. A red daily close would seem..unlikely.
--

Regardless of the close, it has been a strong month for the equity bull maniacs, with most indexes seeing net monthly gains of 4-5%.
-

updates into the close..if I am still awake.

I suppose a few will be getting overly excited about it, but hey..I can only suggest they go look at a monthly chart for a few minutes.

It remains bizarre how many are still trying to trade these tiny retraces...day after day...after day.


3.04pm.. amusing to watch the maniacs on clown finance TV.

They are swinging from hyper-bullish mode to 'omg, what about the Ukraine' in a matter of a few hours.

Clearly, a few of the weaker bulls are bailing ahead of the weekend, but really, this is just the same nonsense we've seen across February.

No doubt though, a lot will be top calling this weekend...but then, they been doing that all month.
--

3.21pm..market is starting to whipsaw and annoy all of the day traders...

Now the micro 5min cycle is offering strong upside into the close, although the 1860s look kinda hard to get..considering the last hour.

*meanwhile..on clown TV, some guest is claiming there is NO evidence Fraking causes enviro' problems.

Is it a full moon yet, or is Jupiter opposite Neptune or something?   Things just feel a little twitchy today. 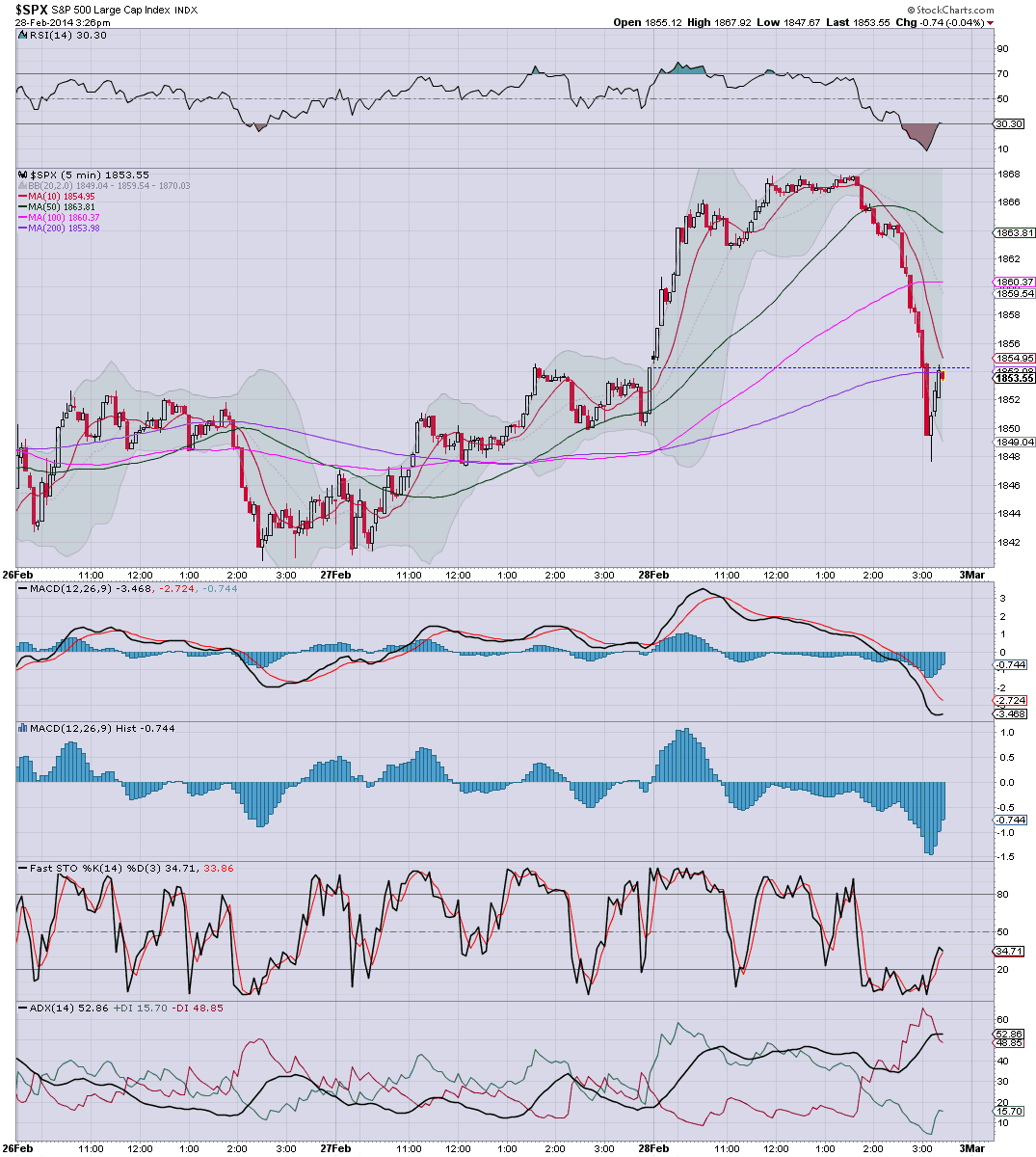 That is a pretty interesting afternoon drop...but still, part of it is probably end month closing trades.
-

*amusing to see half of the financial web light up like a Christmas tree on fire, with an hourly swing of just over 1%...ooer..the drama!


3.32pm...hyper micro ramp....the bear chasers on the downside..getting nuked now! What an end to the month!


3.40pm... VIX is telling the story..with a black-fail candle on the micro 5min cycle 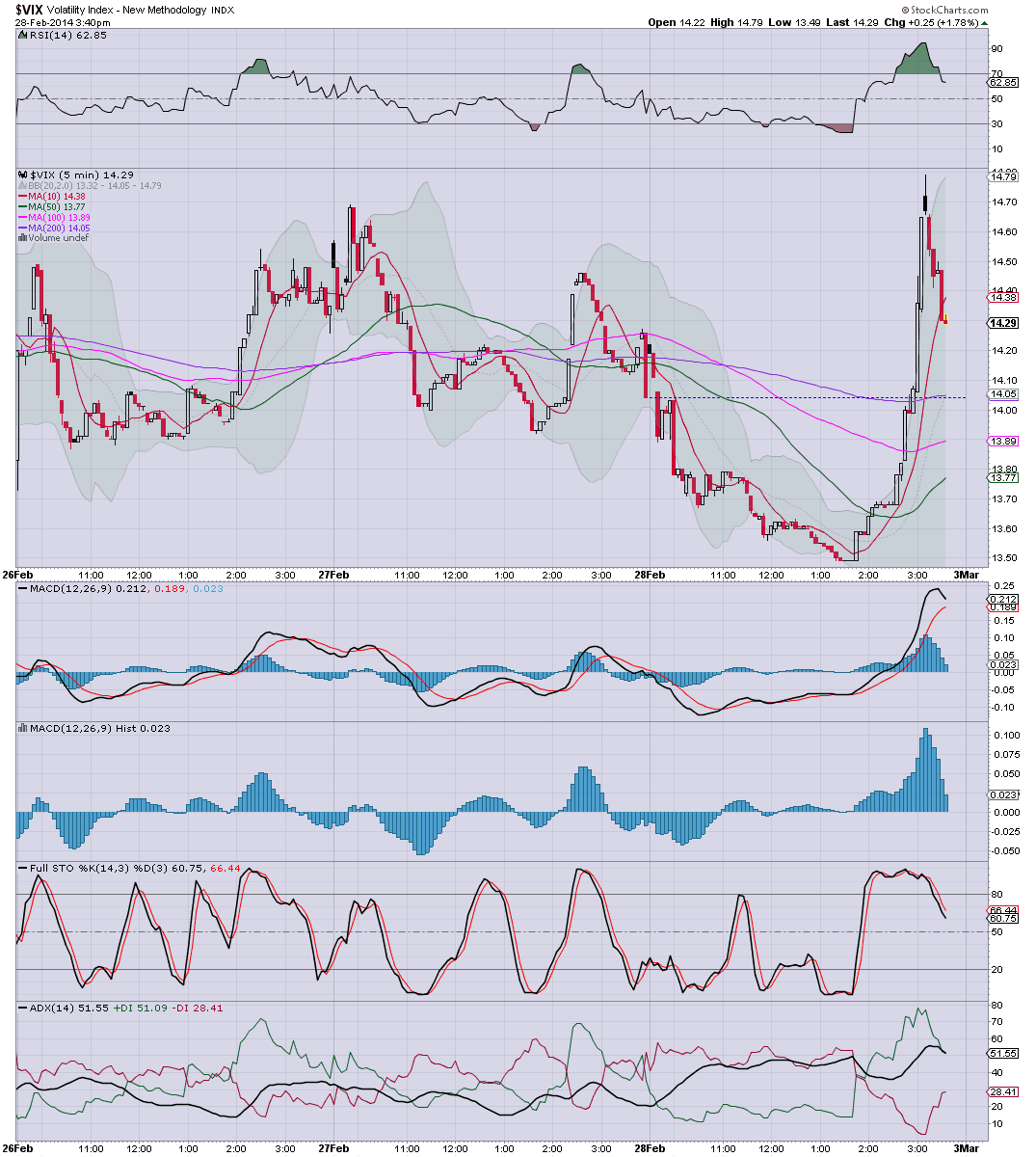 
3.43pm...clown TV noting 'bad weather for New York' next Monday, and it could be an issue for the market.

Regardless...looks like the bull maniacs recovered the day, with one of the most powerful closing hour recoveries we've seen in a fair few months (at least that I can remember).

Considering we were 1847 just earlier..that's a pretty strong swing of 0.7%

What a closing hour to end the month!     even TSLA went red...ohh the humanity!

*VIX will probably turn red in AH... will know by 4.15pm..when the final print appears.


3.56pm.. bulls still fighting for the 1860s.....amazing.   BACK at the close !
Posted by Trading Sunset at 19:52:00
Email ThisBlogThis!Share to TwitterShare to FacebookShare to Pinterest

After the minor scare in late Jan/early Feb, the US capital markets are back to full complacency mode. There is simply nothing on the mind of Mr Market that concerns it. Most notable, VIX is set for a major decline of 26% or so this month. 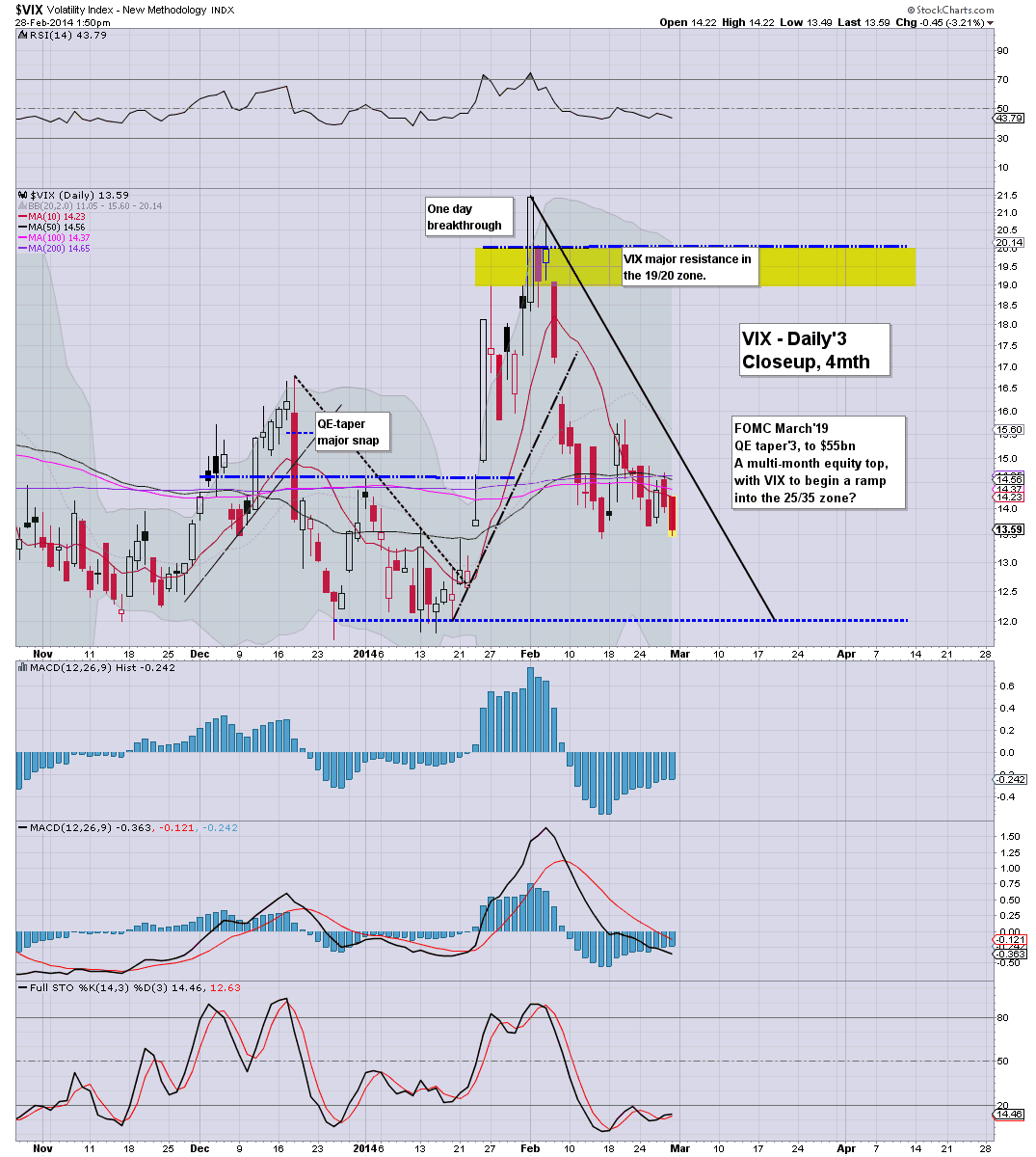 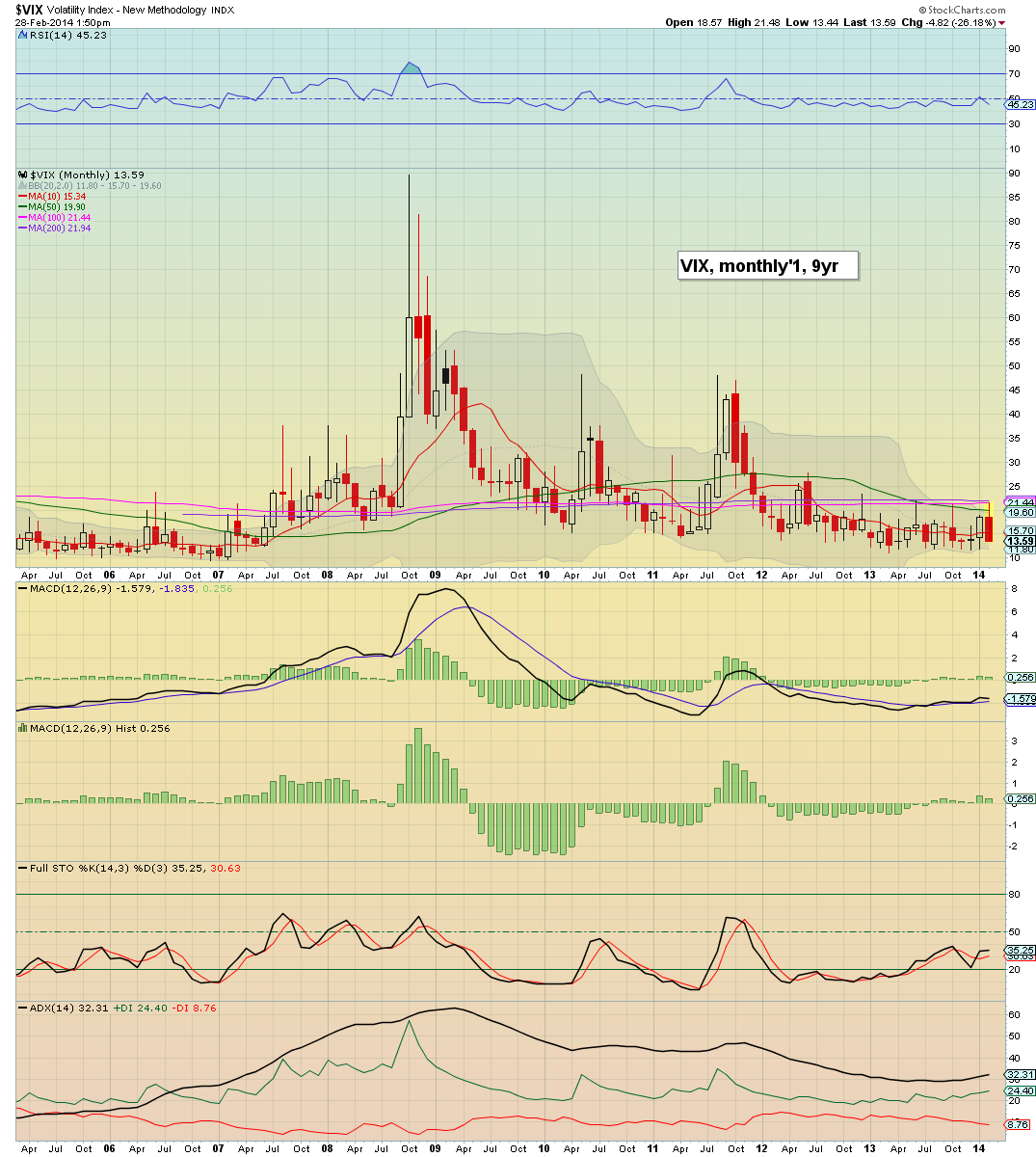 *I rarely post a VIX monthly chart (who does?), suffice to say..look at how tight the bol' bands are..and how we are still getting stuck around all those clustered MAs.
--

However, on no basis will I be meddling long VIX in the next cycle. I'd consider the subsequent wave..if price action looks swings back to the bears.
-

2.15pm.. minor down cycle. First support is 1860/58....and I'd guess we do manage to get a monthly close around 1860.
Posted by Trading Sunset at 18:58:00
Email ThisBlogThis!Share to TwitterShare to FacebookShare to Pinterest

US indexes continue to hold moderate gains, with the sp +0.6% in the 1860s. The early February low of 1737 now looks a very long way down. Even breaking <1800 in the next multi-week down cycle will be difficult. Metals are slipping, Gold -$7 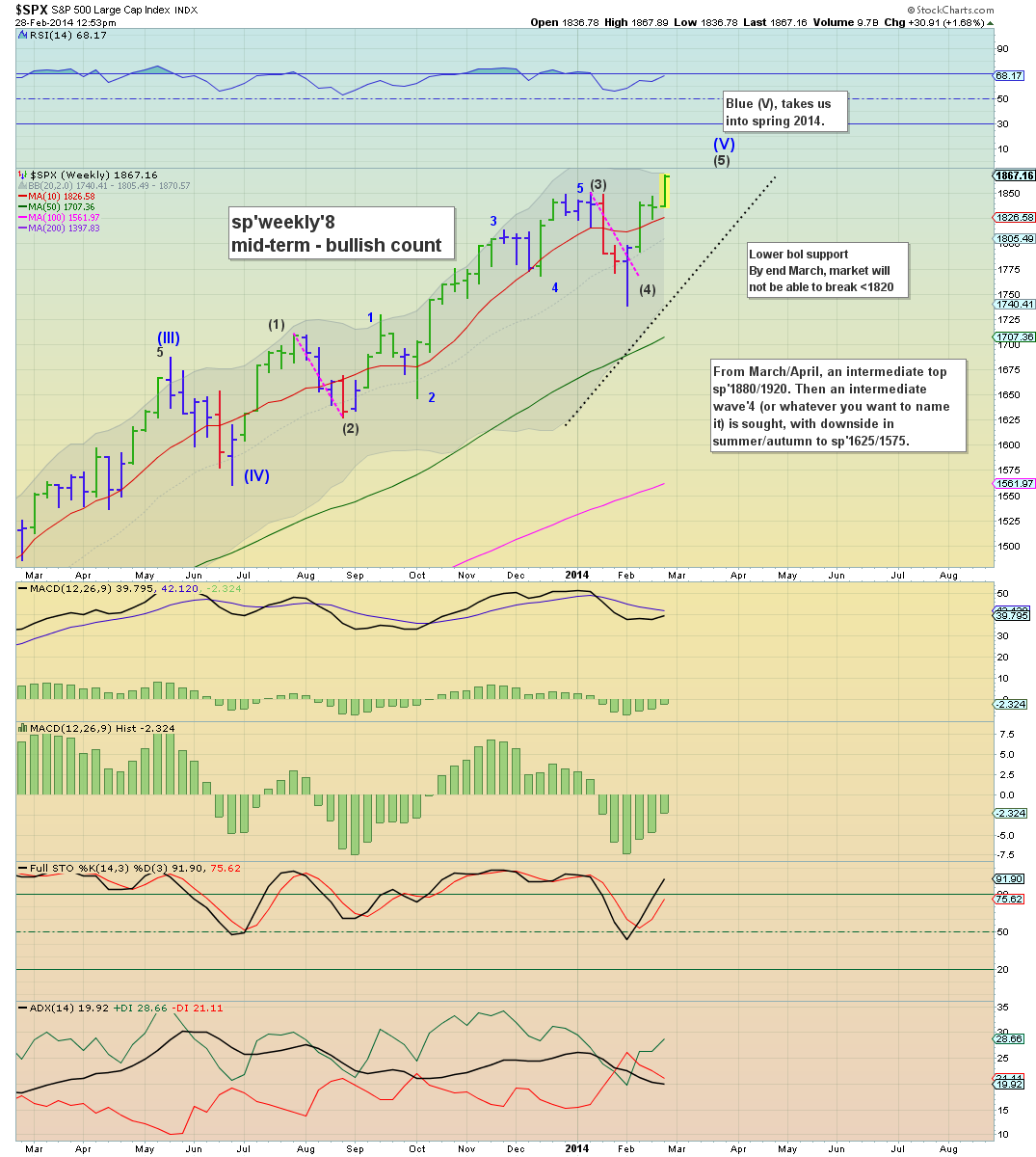 The above outlook remains my best guess...

I am literally counting the days until the next FOMC of March'19.

stay tuned!
Posted by Trading Sunset at 17:55:00
Email ThisBlogThis!Share to TwitterShare to FacebookShare to Pinterest

US indexes are holding moderate gains, with the sp'500, NYSE Comp, and R2K at historic highs. Metals are a touch weak, with Gold -$5. VIX is merely melting lower into the weekend, -2% or so, in the upper 13s. 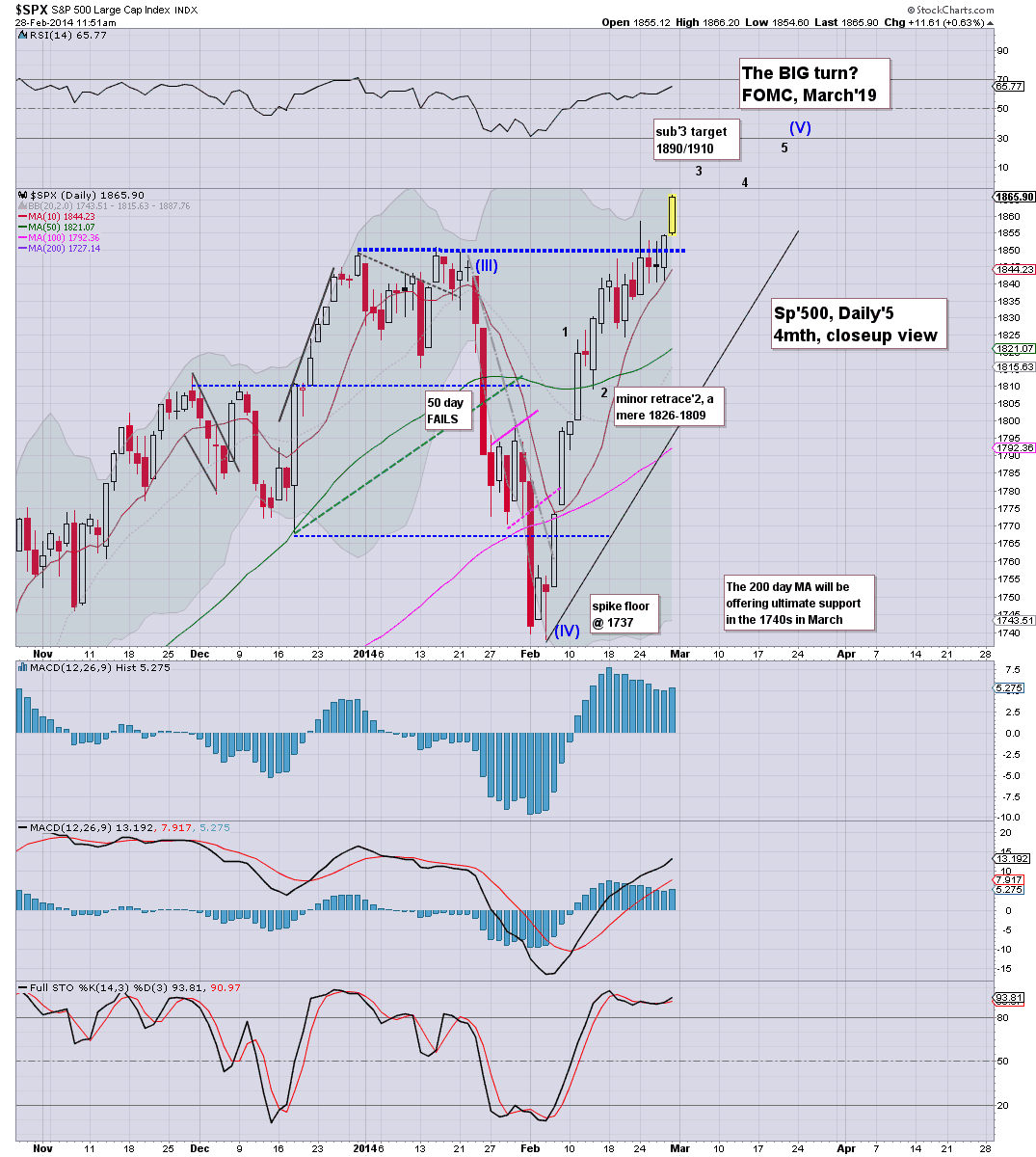 There is little to add, on what is just another day for the bull maniacs.

Simply put..bears have ZERO downside power, whilst there remains a pretty strong underlying bid. It'd look like the current wave (sub' 3, or whatever you want to call it), will last for much of next week.

For the moment, everyone is now bullish for March.  Where we close March though..that is another matter entirely.
-

--
time for tea.
Posted by Trading Sunset at 16:52:00
Email ThisBlogThis!Share to TwitterShare to FacebookShare to Pinterest

11am update - how much upside for March?

US indexes are wrapping up the month with breaks to new historic highs in the sp'500, R2K, and the NYSE Comp' - other indexes look set to follow. The primary issue now is how high might the follow through be next month? Best case for the bull maniacs looks to be the low 1900s...before a reversal. 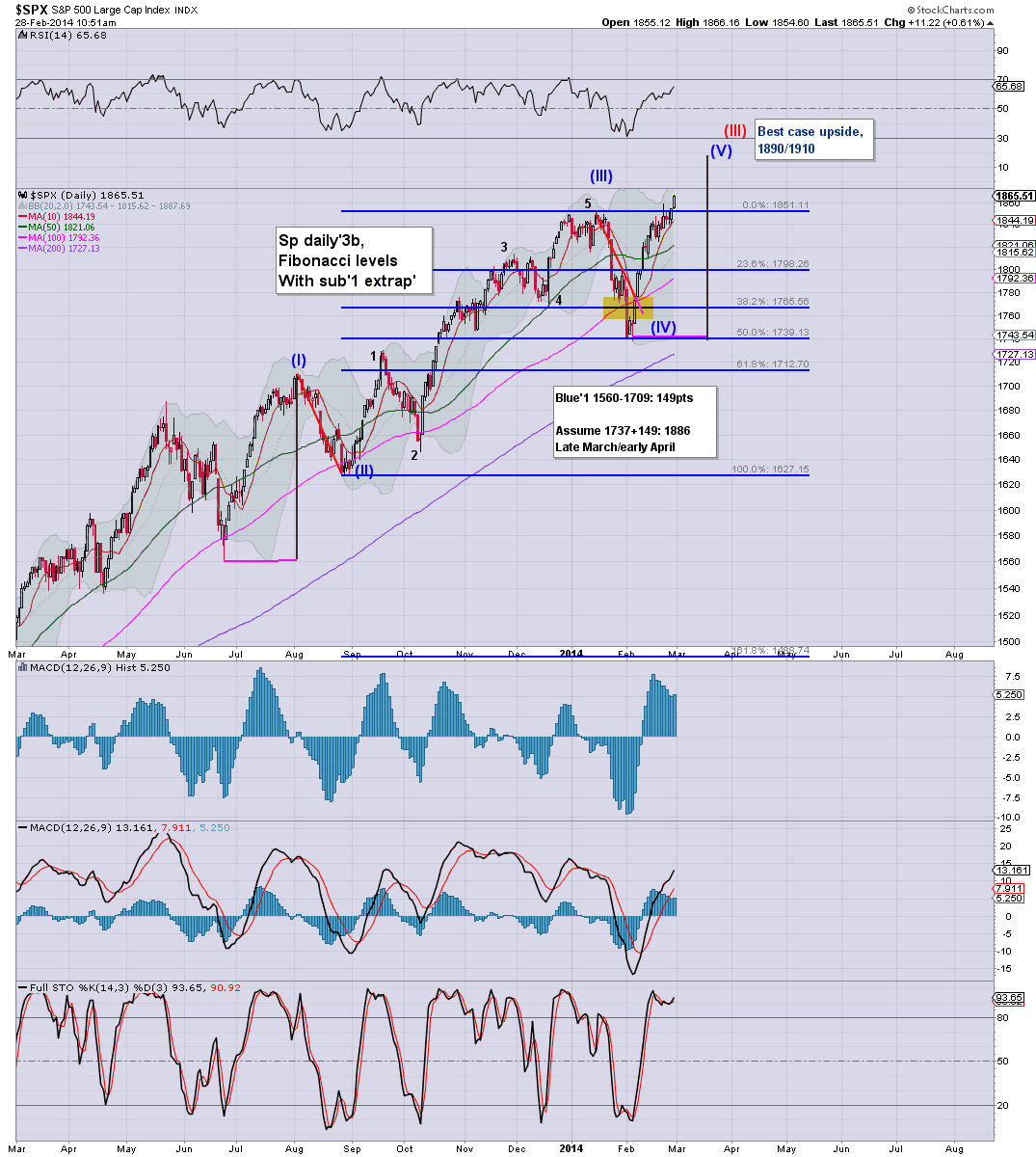 *yes yes, I realise a fair few would disagree with what I've done on the above chart. However crude it might be...it at least offers a clue as to where we might get stuck next month.
-

*I have found it rather bizarre in the past few days, seeing a fair amount of 'doom' talk. With people trying to capture minor retracements on the short-side, I mean...why bother? Overly risky.
-

Nat gas rising...with UGAZ +8.5%.. but still a major net weekly drop of -23%
Posted by Trading Sunset at 15:54:00
Email ThisBlogThis!Share to TwitterShare to FacebookShare to Pinterest

US equities open largely flat, but with equity bears still powerless, the underlying upside pressure might be enough to get a monthly close in the sp'1860s. That will bring within range the lower end of the 1880/1920 target zone by mid March. VIX looks set to melt lower into the weekend. 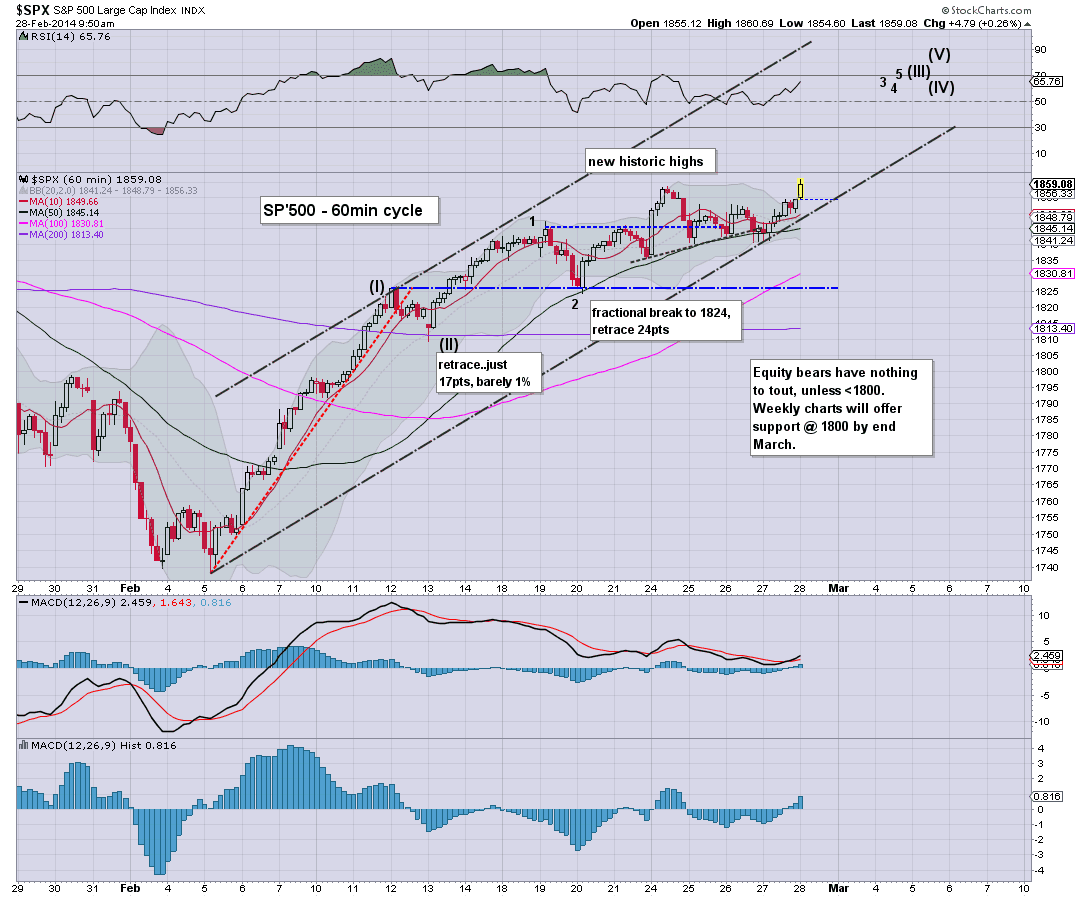 So..we've already broken into the 1860s...and with the daily cycle now offering 1885 in the immediate term...equity bears look utterly broken.

Regardless of any chop today...bulls are closing the month with very powerful gains.
- 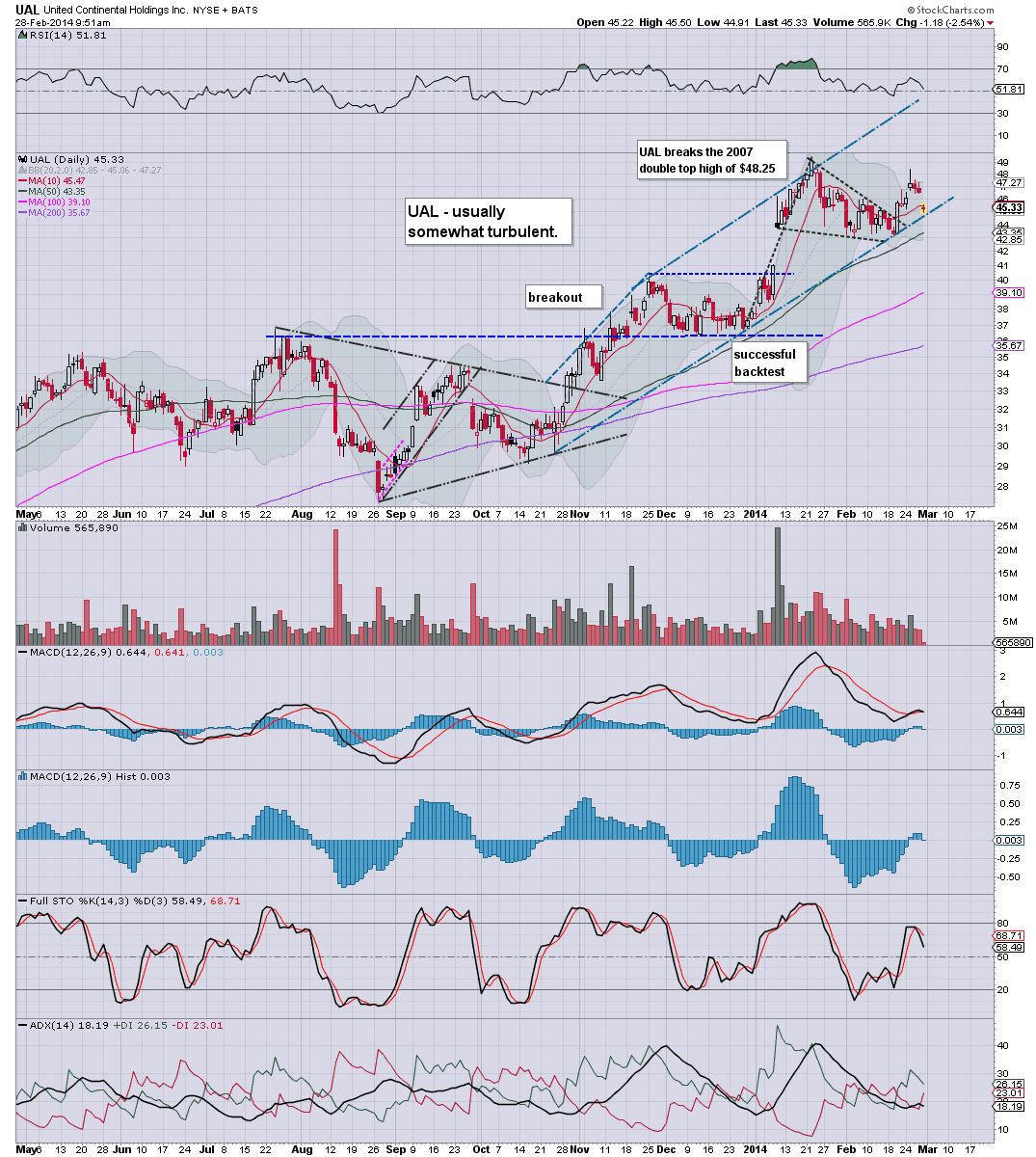 Will it hold the trend, before a lurch into the low $50s?   Regardless, that is one hell of a ramp since last summer.
- 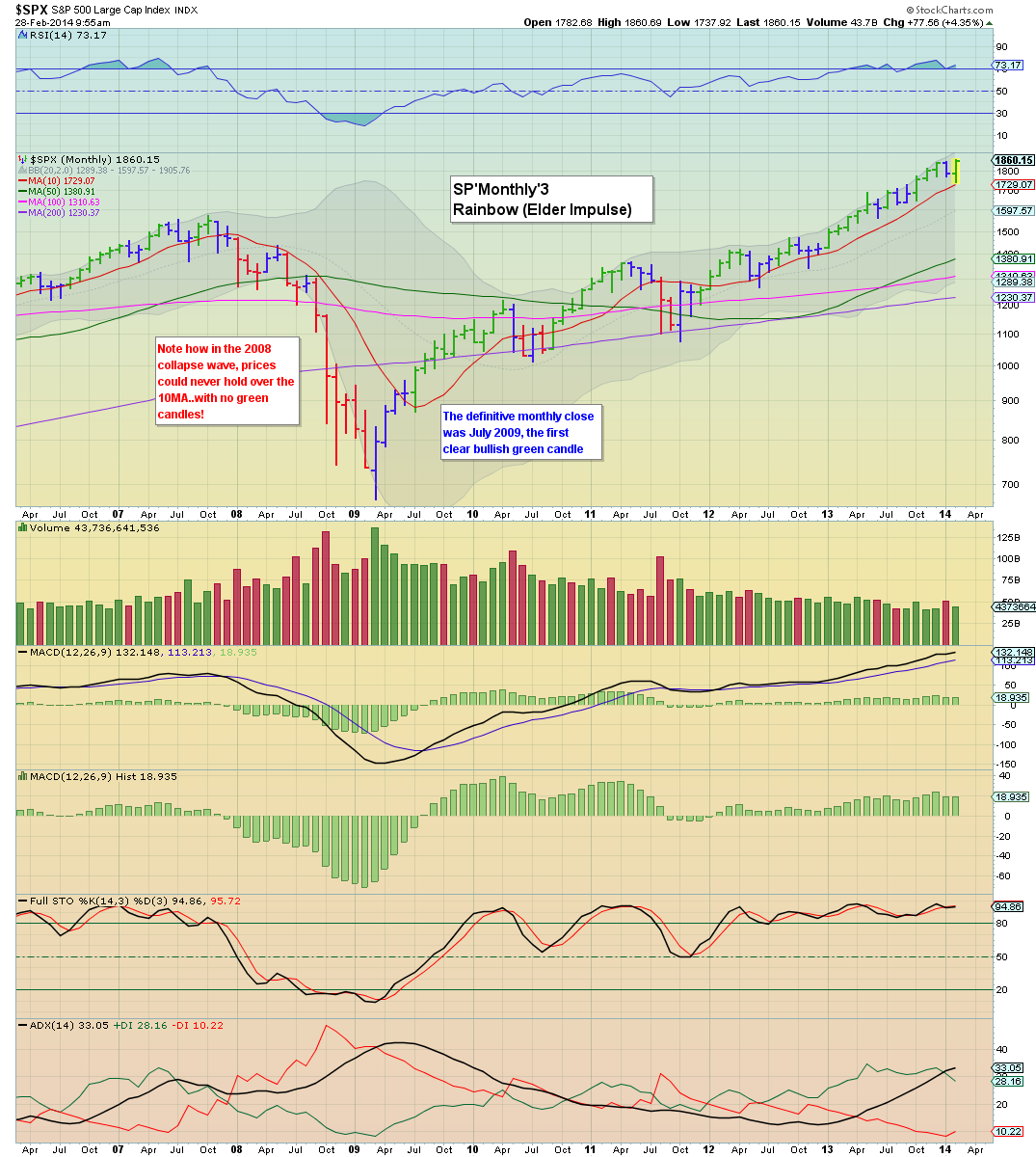 Monthly candle finally turns back to green @ sp'1860....we're back to outright bullish on the giant cycle.

Notable gainer UGAZ +7%, but still -20/25% on the week
Posted by Trading Sunset at 14:51:00
Email ThisBlogThis!Share to TwitterShare to FacebookShare to Pinterest

Good morning. Futures are a touch lower, sp -2pts, we're set to open around 1852. Metals and Oil are broadly flat. Equity bulls should be content with any weekly/monthly close in the 1850s, with a fearless VIX in the 14/13s. 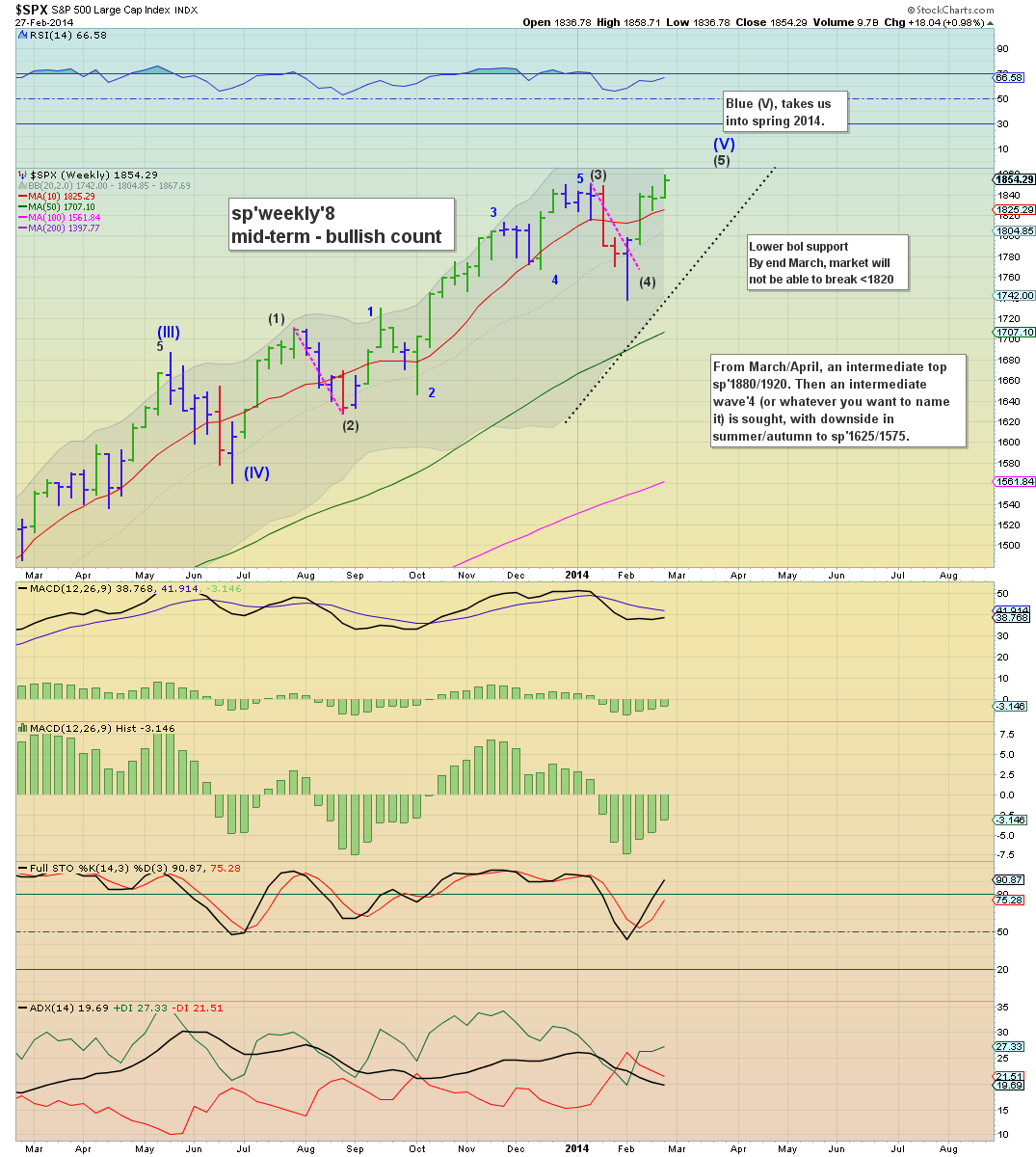 Well..its the end of the month, and unquestionably..it was a month for the equity bulls. With new historic highs on the sp'500, Nasdaq, and R2K, the bulls are in full control.
--

re: weekly'8. I am holding to this outlook. Seeking a key top around the time of the next FOMC. (March'19), somewhere in the sp'1880/1920 zone. As ever though, price action is everything. If I have to wait another month..until late April/early May to launch an initial big short...so be it.
-

8.30am  Indexes are mostly flat...after a marginal miss on GDP.

Certainly, many will now wonder about a final Q4 GDP sub 2.0%..due late March. Considering the Fed were throwing $250bn at the US capital markets in Q4 - equv' to 2% of GDP....you could justifiably argue the US was flat lining in Q4.

Whether we can close in the 1860s...is not important. The monthly gains are already very clear.

Notable weakness: UAL, -2.8%
Posted by Trading Sunset at 13:00:00
Email ThisBlogThis!Share to TwitterShare to FacebookShare to Pinterest

Another month to wrap up

February has been a lousy month for the equity doomer bears. Not only did the bulls manage to halt the decline before hitting the lower weekly bollinger, but the bulls pushed back higher..and just kept going. Most indexes look set to close February with net gains of 4-5%...incredible! 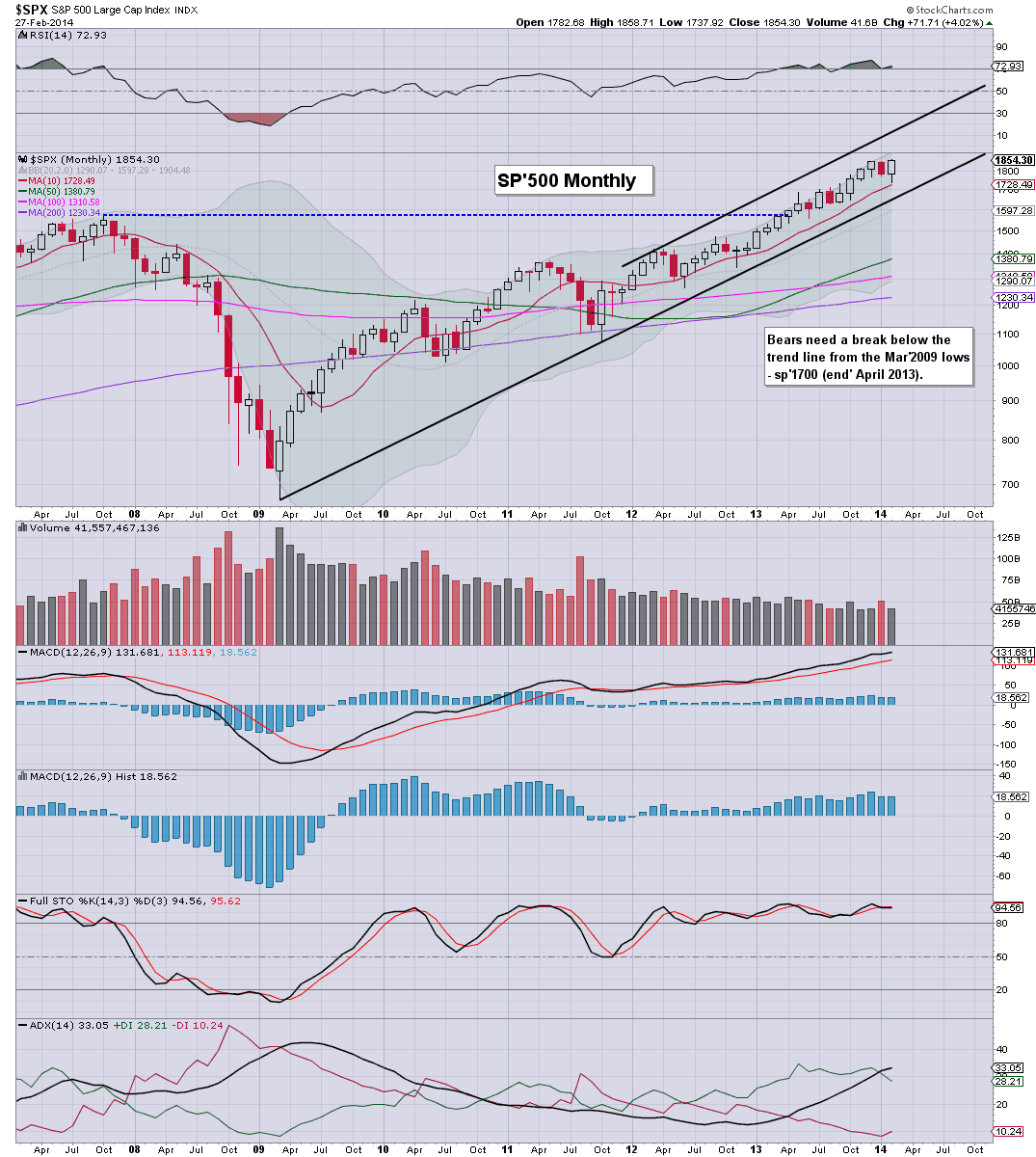 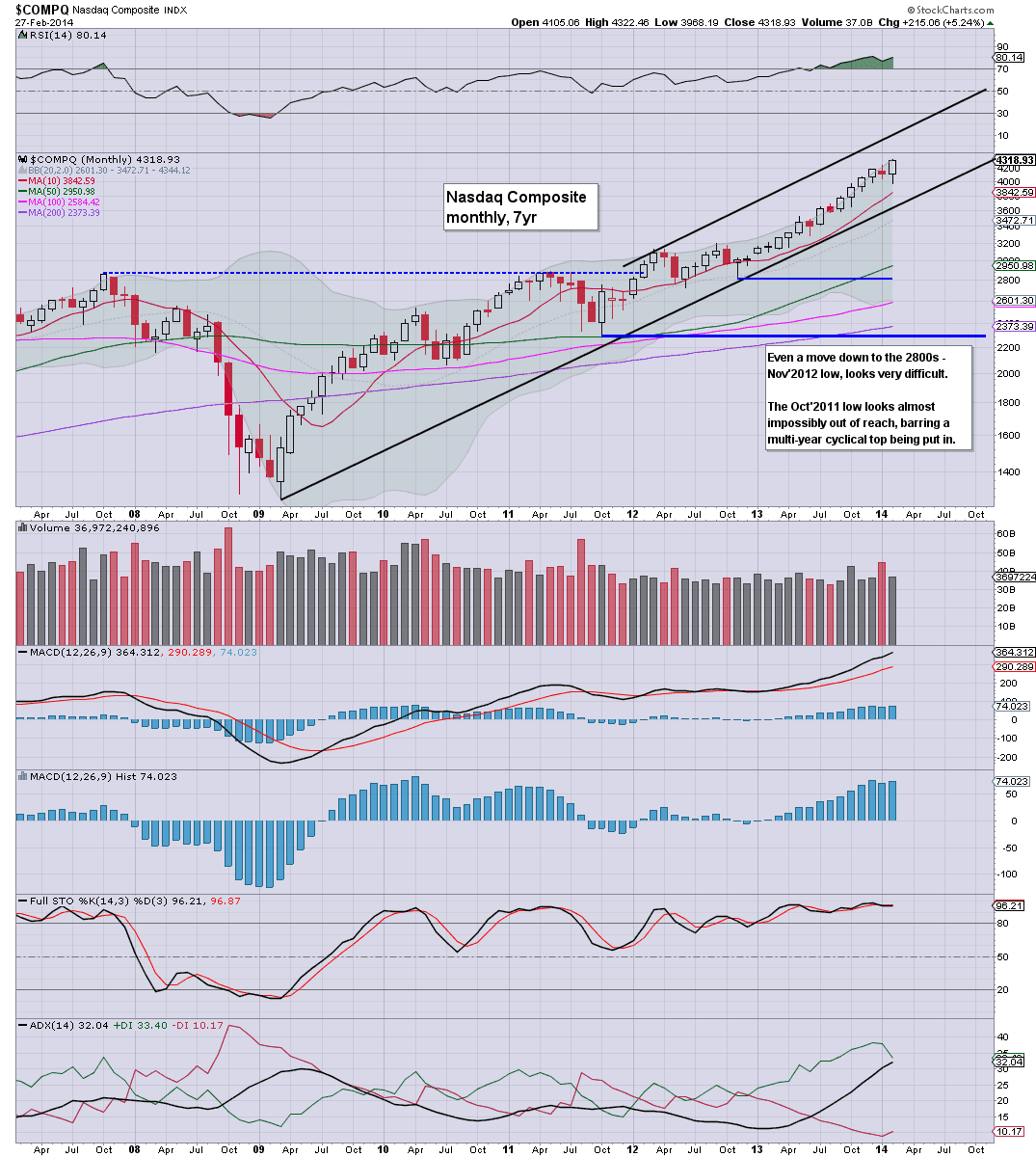 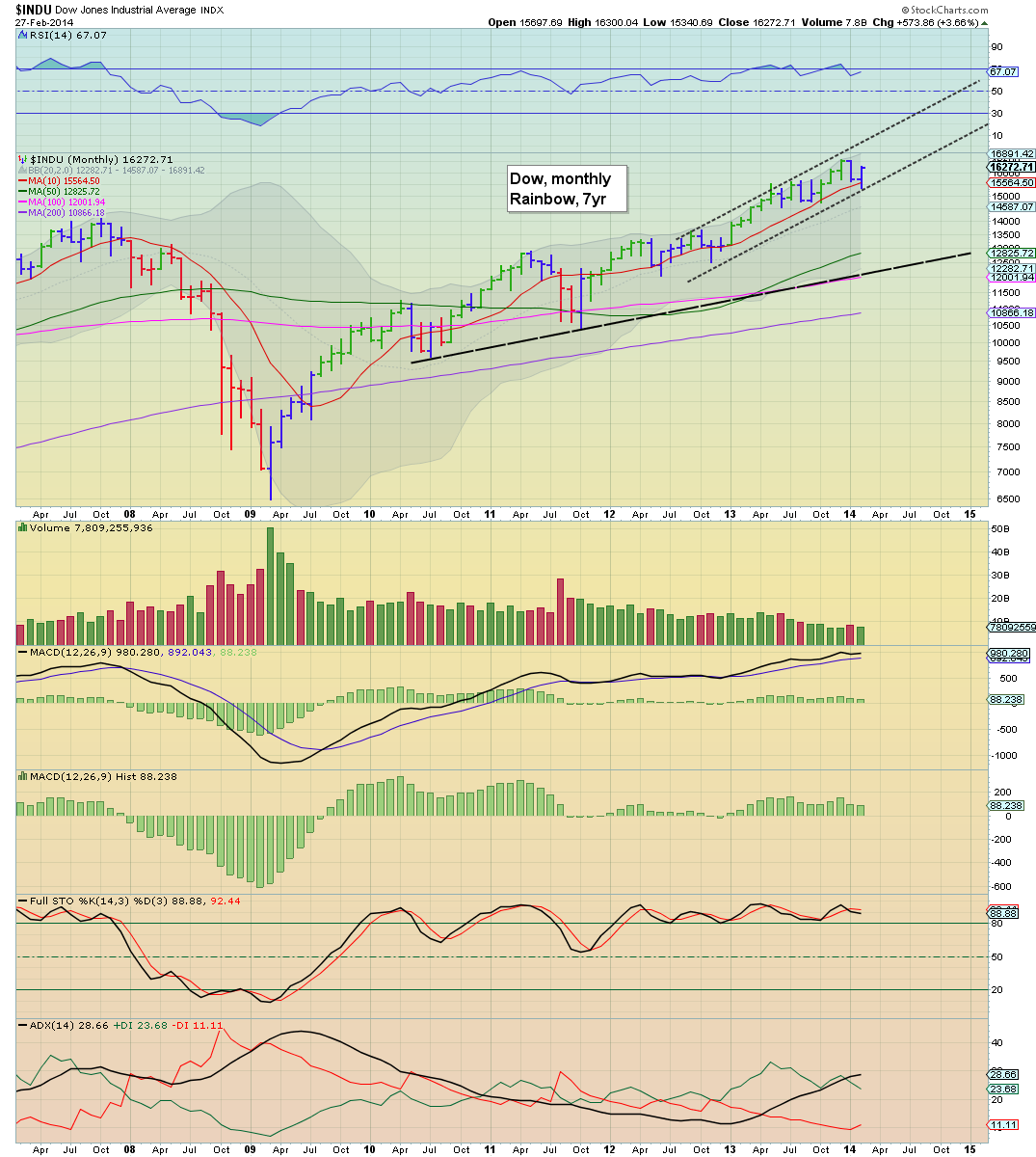 Even the Dow, which continues to lag the general market, looks set to close the month with gains of over 500pts. How could anyone dare be bearish about that?
-

The week concludes with an array of econ-data. We have GDP (second reading), market is looking for a reduced estimate of 2.5% vs 3.2%. There is also PMI, consumer sent', and homes data.

That will be plenty enough to give the market an excuse to rally on 'better than expected' data.

*next sig' QE-pomo is not until next week (the March schedule is released at 3pm, Friday)
--

The US equity market saw moderate gains, sp +9pts @ 1854. The two leaders - Trans/R2K, settled higher by 0.6% and 0.5% respectively. Market looks set to continue broadly higher into the weekend..and probably also much of March. 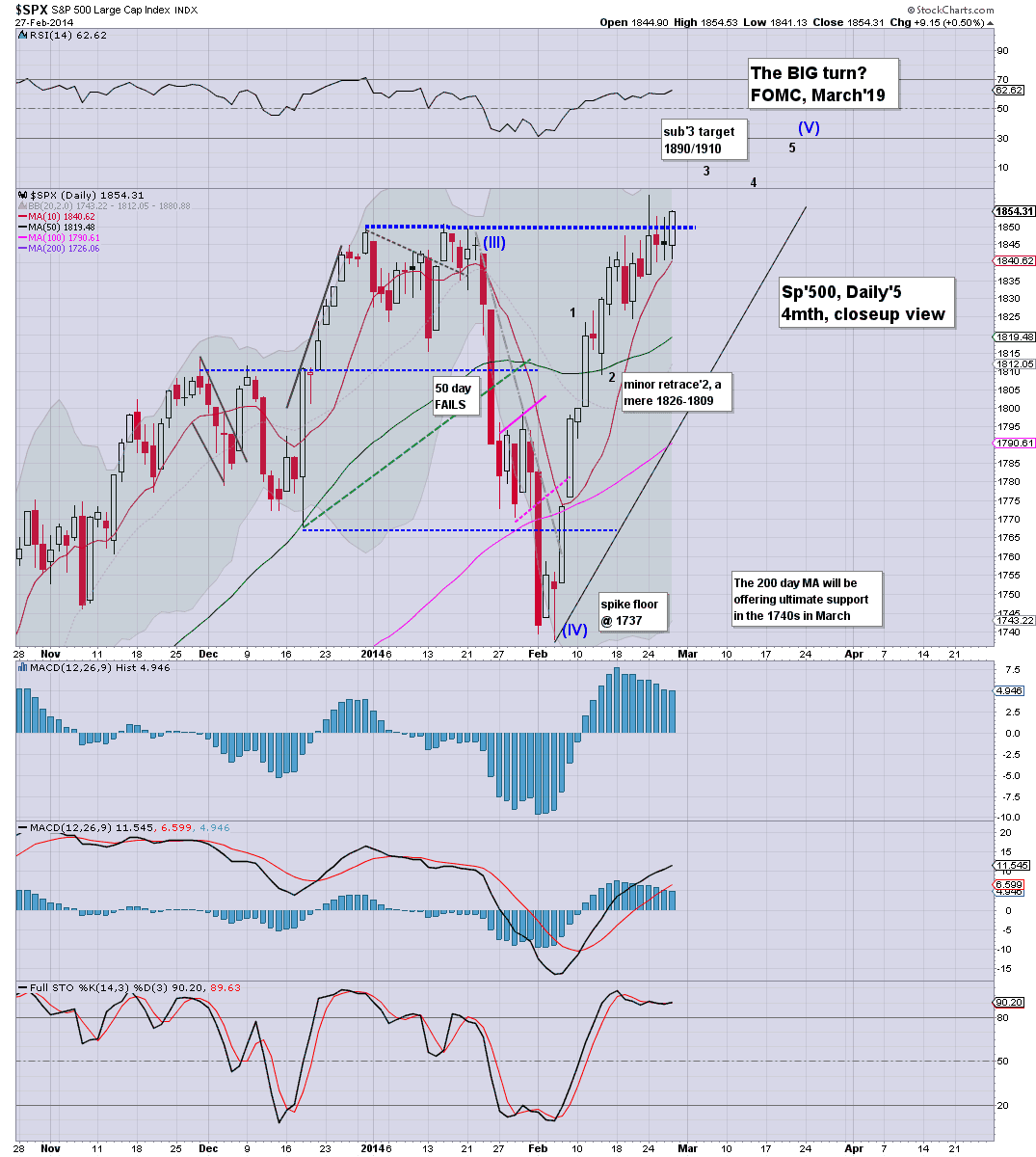 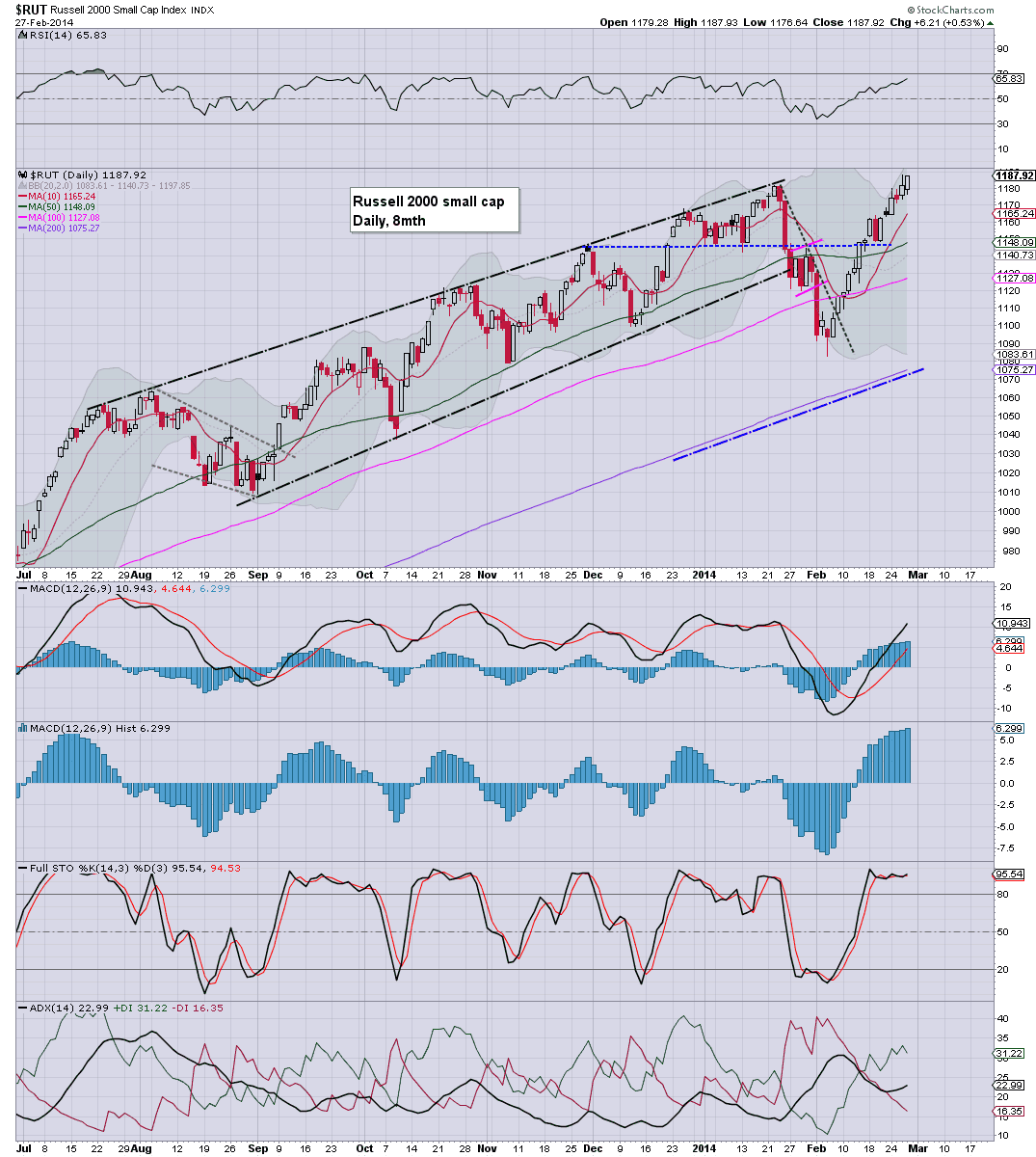 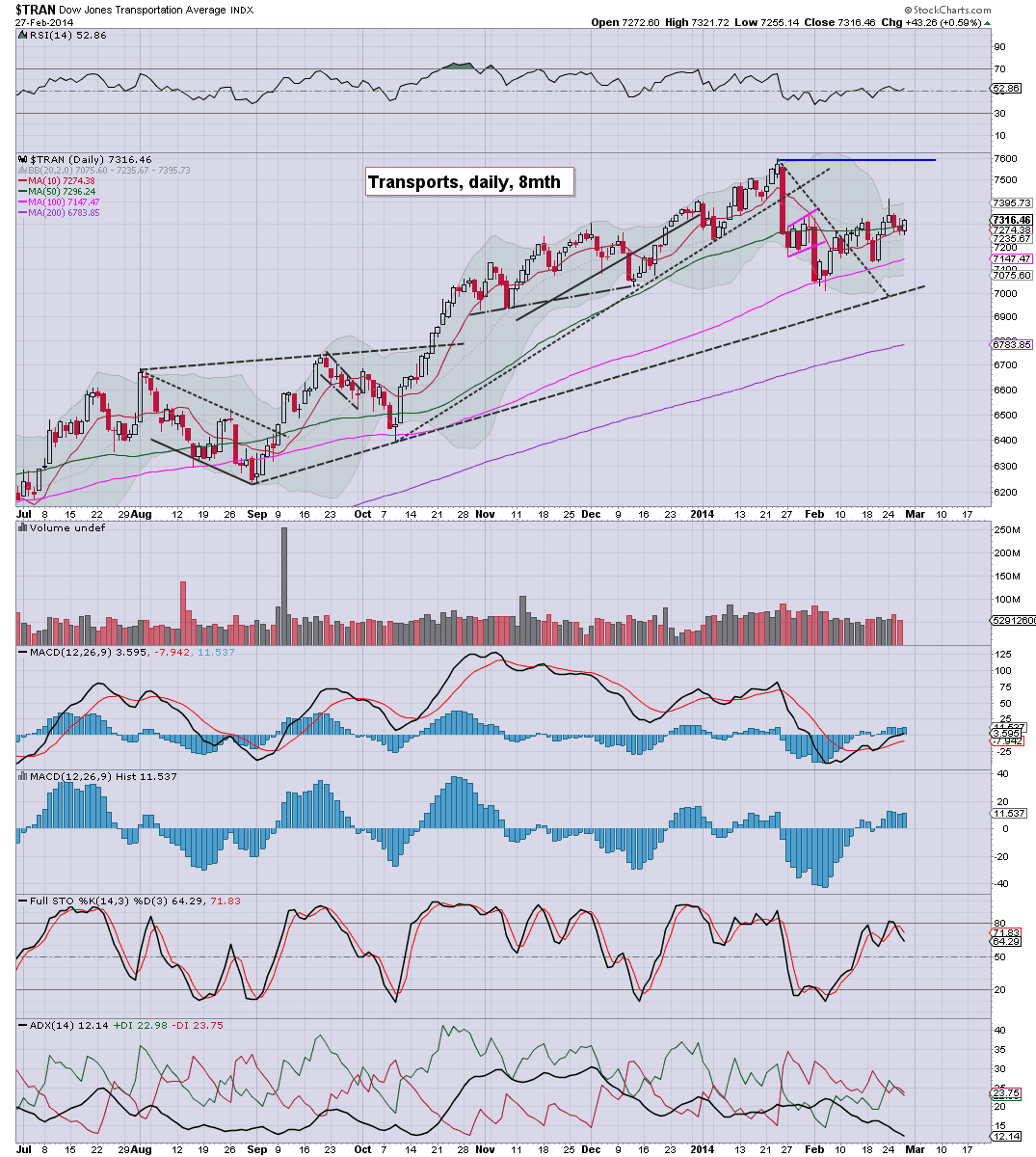 There is little to add. Most notable aspect, the upper bollinger on the sp'500 daily cycle is now offering the 1880s in the immediate term, and that certainly appears viable as early as the latter part of next week.
-