Volatility down on the week

With the main indexes closing higher on the week, volatility slipped lower by almost 9%, with the VIX closing in the low 14s. 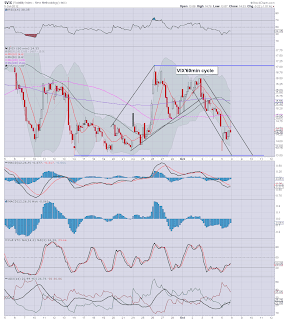 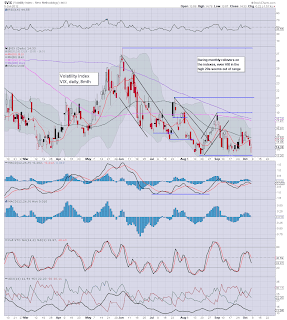 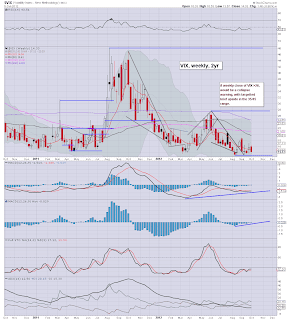 So, yet another week where the bears had hopes...only to be dashed. Even the closing hour of today was another micro-failure for the bears.

The underlying, and hugely important weekly VIX cycle remains essentially floored. The only issue is when it will explode higher, not 'if'. Of course, the leveraged VIX instruments like TVIX/UVXY suffer from terrible decay, and do the standard VIX calls.

For the moment, I hold to a simple red flag warning outlook, where we should look for a weekly VIX closing >20. Until we see that level of weekly close, the more conservative bear traders should arguably just wait.

A little more later.
Posted by Permabear Doomster at 23:00:00
Email ThisBlogThis!Share to TwitterShare to FacebookShare to Pinterest

A pretty weak 2-3pm hour, but the closing  hour was yet another bear fail. We did see a clear breakout this morning, the Dow broke above the QE spike high, and the SP' broke above what remained of the bear flag.

With today's price action, I am now a little more curious about how we'll open Monday. 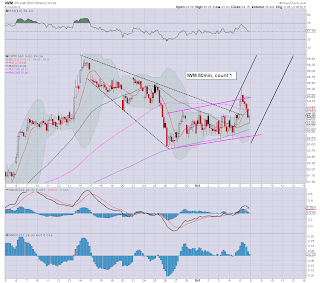 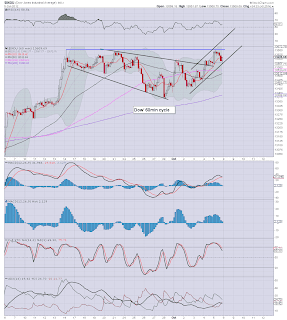 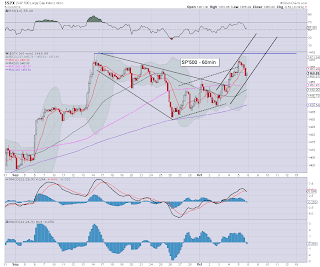 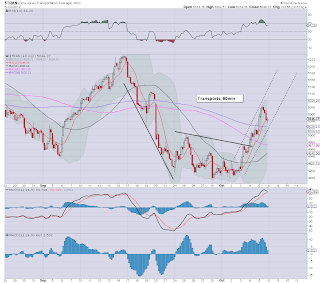 We are still in near term up trends, and the closing hour action was again supportive of underlying strength. The bears just can't get a decent sustained down cycle.

Until we see the recent key low of sp'1397 taken out, its just a case of higher highs..and higher lows.

More later, and across the weekend.
Posted by Permabear Doomster at 21:05:00
Email ThisBlogThis!Share to TwitterShare to FacebookShare to Pinterest

A bit of a messy Friday. We're seeing weak commodities, especially Oil and the Metals. 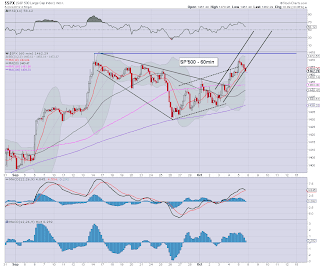 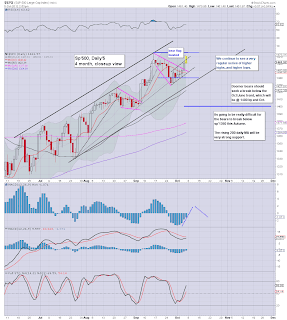 I'm certainly not going to get excited if we close red, but it would take the edge off what has been another deeply frustrating week.

If Oil can close <90, that would meet my second red flag requirements.
--

*AAPL is weak, a close under the 50day would be a little bearish warning for next week, but really, its arguably the last stock in the world to short.
-

back after the close
Posted by Permabear Doomster at 19:55:00
Email ThisBlogThis!Share to TwitterShare to FacebookShare to Pinterest

Whilst the underlying momentum is about to go positive cycle within the next 5-10 trading hours, bulls are set for a few more days of upside. 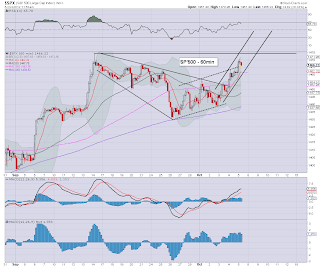 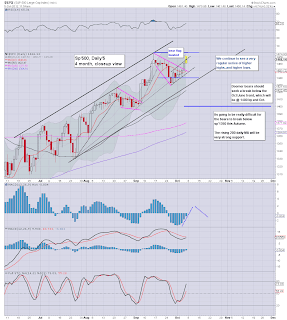 We may or may not close >1474, not that it matters. Underlying cycle is still upward.

Once again, we put in a higher low...and now we're set for another higher high. Until that pattern stops, bears are fighting a freight train, driven by the Ben Bernank.
--

Time for lunch, back at 3pm
Posted by Permabear Doomster at 16:56:00
Email ThisBlogThis!Share to TwitterShare to FacebookShare to Pinterest

10am update - green shoots..all over again

With the headline unemployment rate falling to 7.8%, its good to know everyone has a job now. Clearly, everything is on track, and we're now all set for SP'5000 in a year or two, yes? 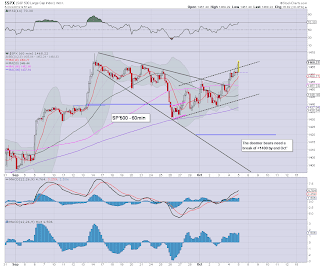 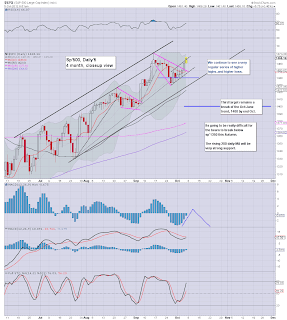 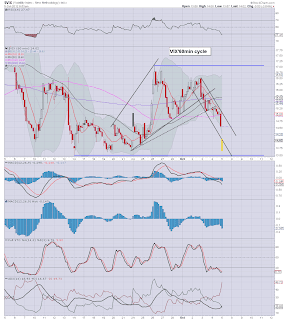 Both the Dow and SP' are within 0.5% of breaking new index highs, which seem very viable today.

The transports and Rus'2000 are still badly lagging, and would take some weeks to break new highs, even if the current rate of trend continues.

VIX whacked lower, to be expected. Its showing a reversal candle this opening 30minutes, but thats not to be trusted.

The daily index cycles are due to go positive cycle late today or Monday, further upside is likely.

back at 12pm
Posted by Permabear Doomster at 14:55:00
Email ThisBlogThis!Share to TwitterShare to FacebookShare to Pinterest 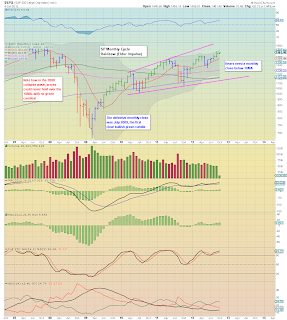 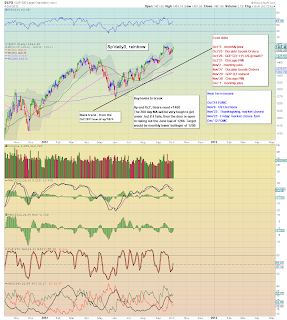 The market is looking for monthly job gains - to be issued Friday 8.30am EST, of 113,000. I'd guess so long as the number is not below 75k, the market will consider it 'acceptable'. After all, things like 'employment as % of population' doesn't seem to matter anymore. So long as the headline number continues its slow descent, the media will tout it as evidence that the Fed's actions are working.

October is of course notorious for sharp downside moves, but considering the style of movement in the VIX lately, it sure doesn't look like the market is even capable of more than 3% downside in an entire cycle.With the daily index cycles now battling higher, the bulls are back in control.

All those touting for year end sp' targets in the 1500s, could see them met as early as next week.

For those currently short, this is indeed as bizarre, as it is sickening.

Another painful day for the bears, with the SP' closing clearly over the trend resistance of 1455. Bulls are back in control. So long as the jobs data is considered 'acceptable' by Mr Market tomorrow, the market looks set to break new index highs in the coming days. Incredible. 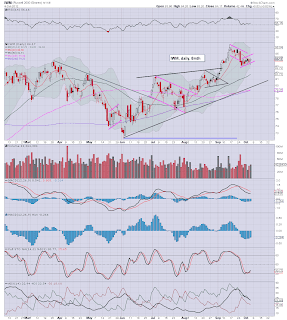 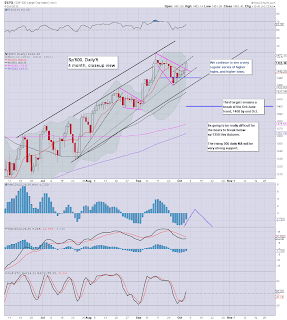 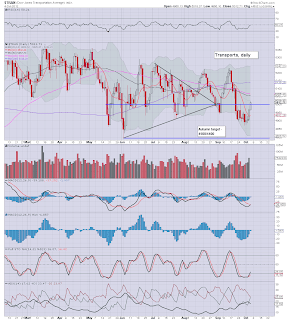 So..what now? The Sp' daily chart could still be said to have a bear flag - now six days old, but considering everything else, I'd guess its a replay of late August. The bear flag will of course be completely invalid if we break above the spike high of 1474.

The underlying MACD (blue bar histogram) is indeed cycling back higher, and we're set to go +cycle on the main indexes in the next 1 or 2 days. Certainly, the bulls are back in control.

As ever, its all about perception, and if Market likes the jobs number tomorrow, even if its sub 100k, then we'll just keep going higher. Its a nasty market, one built largely on delusion, inspired by the media, and propped up by the Fed, and gods know who else.