Most world equity markets continue their broader upward trend, with March net gains ranging from +13.2% (China), +2.0% (USA - Dow), to -11.9% (Greece). Regardless of any weakness across the summer, it would still appear highly probable that the current global equity bull market has another two years to go. 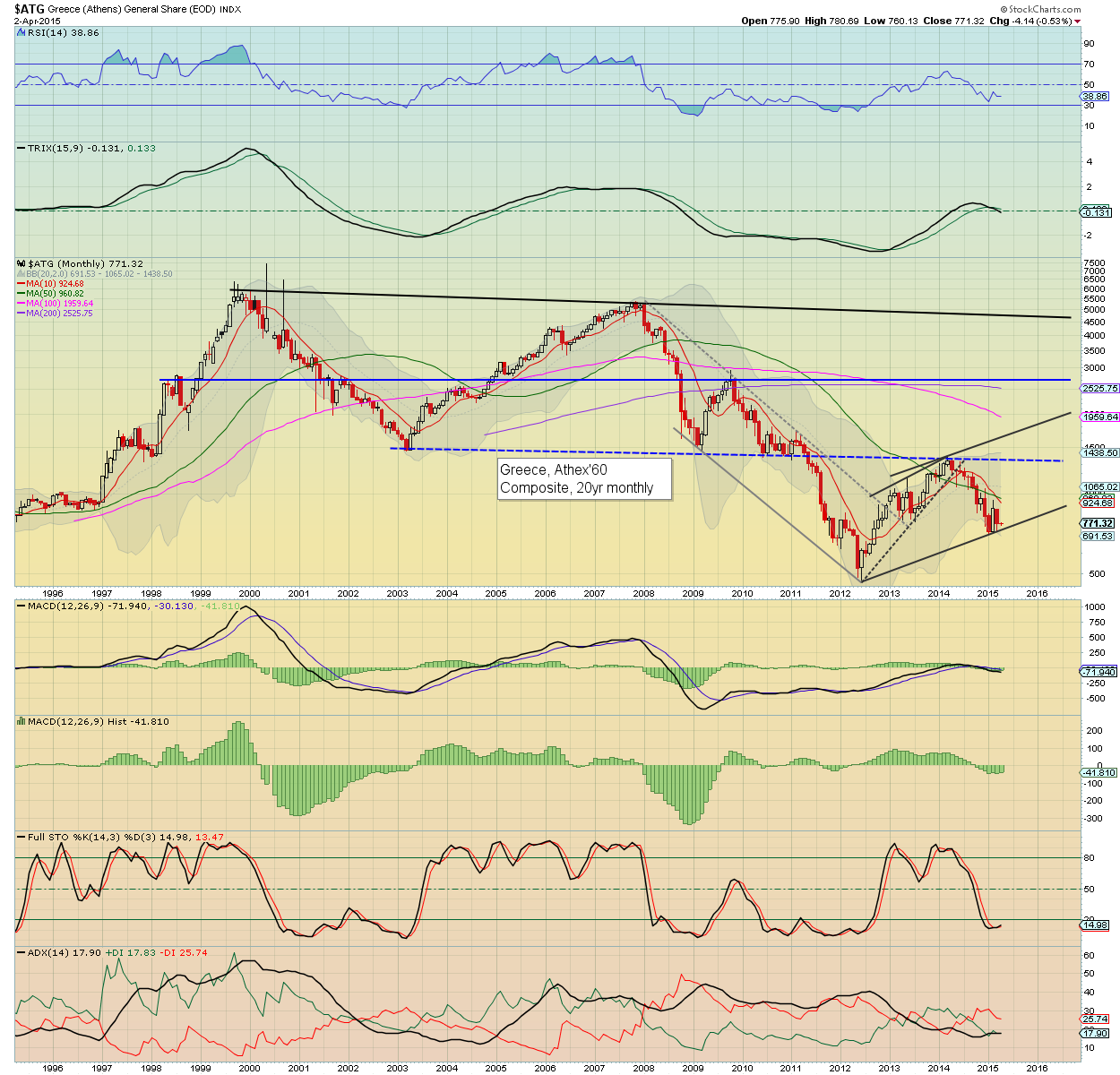 The Greek market reversed and lost most of the February gains, with a net monthly decline of -11.9%. Naturally, many remain concerned of a GREXIT, along with an associated debt default of some degree. Key support is around 700.. below that is nothing until the summer 2012 low of 471. Outlook remains broadly 'dire', not least since the Greek people continue to refuse to live within their means.

It remains pitiful how 'austerity' is still seen by many as something to only temporarily do... if not entirely be avoided. Well... the Greek people have got what they deserve.. a collapsed economy.. with no realistic hope of improvement for years to come. As many recognise, the conditions are primed for Greek society to increasingly support groups such as Golden Dawn. 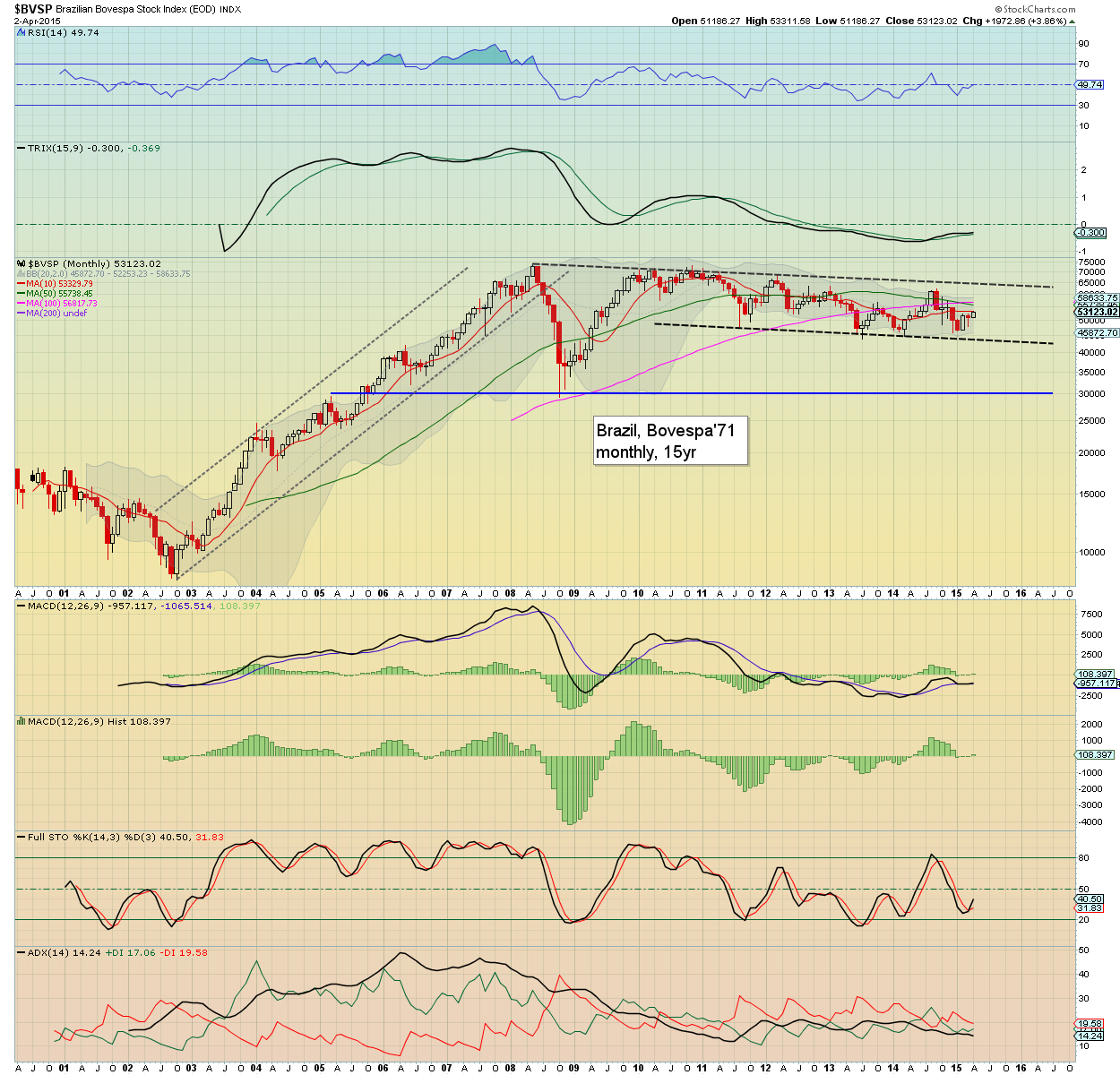 The Bovespa saw a fractional drop of -0.9%, but is already higher by 3.9% this April. A minor rally in some commodities - along with a weaker USD, is certainly helping. What is clear though, the Brazilian market has been stuck in a relatively tight range for a full five years. The break levels are 65k and 40k. 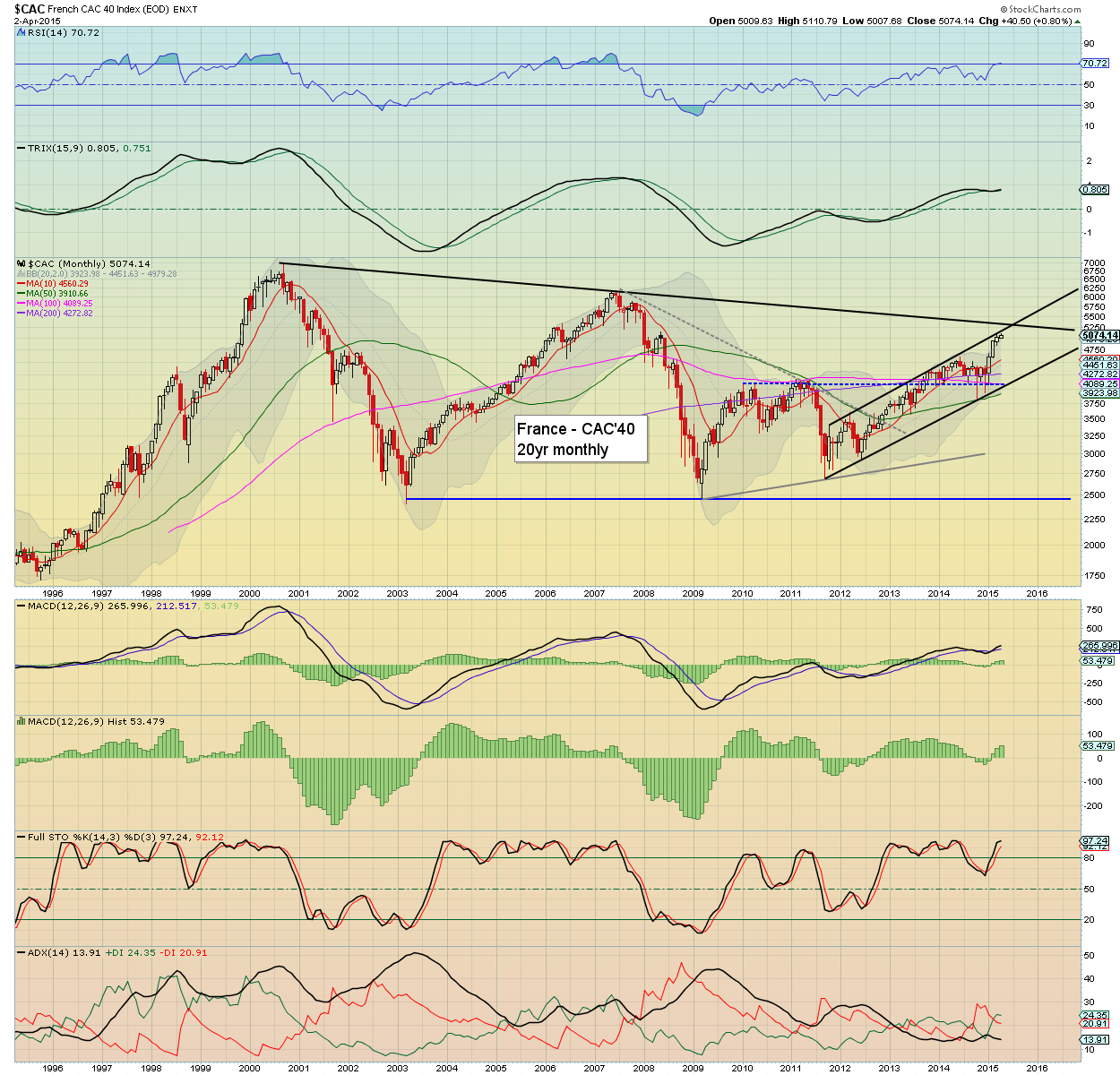 The CAC gained 1.7% in March, with a notable break above the giant 5K threshold. It is probably important to recognise declining resistance.. which this summer will be around 5300/200s.  If the US/world markets get somewhat upset... the CAC could be expected to fall back to 4K, which is a clear 20% lower. 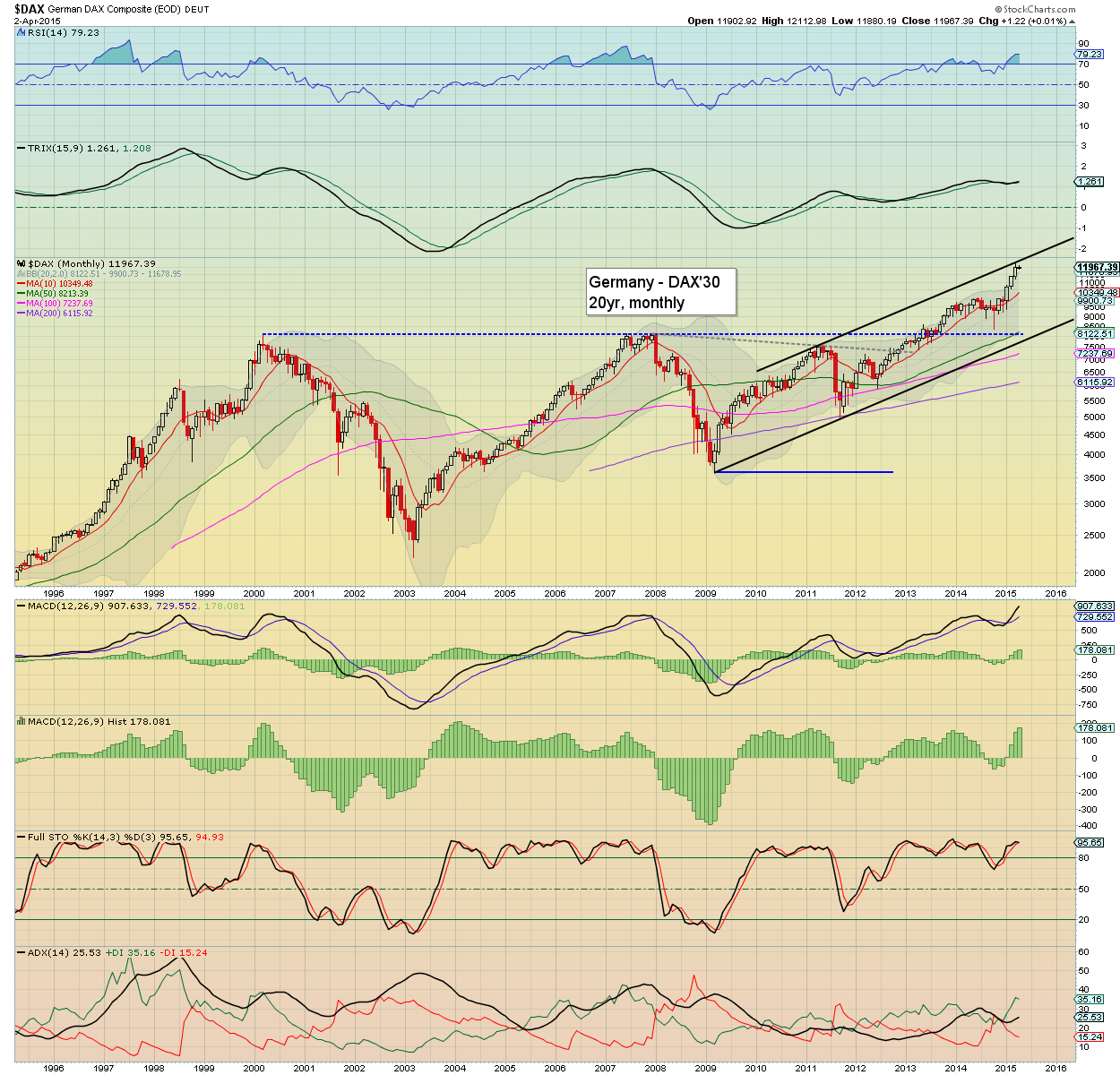 The economic powerhouse of the EU - Germany, saw a third monthly gain to the upside, +4.9%,  breaking into the 12000s. The DAX is now brushing against rising trend/resistance. It will be difficult to climb much further.. and certainly, the rate of increase will very likely decline.

In terms of downside.... even if the EU markets get moody this summer, there is huge price-cluster support in the 10-9k zone. Under no outlook does it look viable for the DAX to break <8K this year. Indeed, a very reasonable upside target - for 2017, would be at least 15/16K.

Something to consider across the next year or so, a pre-emptive 'shock' German exit from the Euro would be hugely beneficial to Germany. Support for such a move will no doubt increase across the next few years. At some point, the German people are going to lose their tolerance with demands from the Greek people... amongst others. 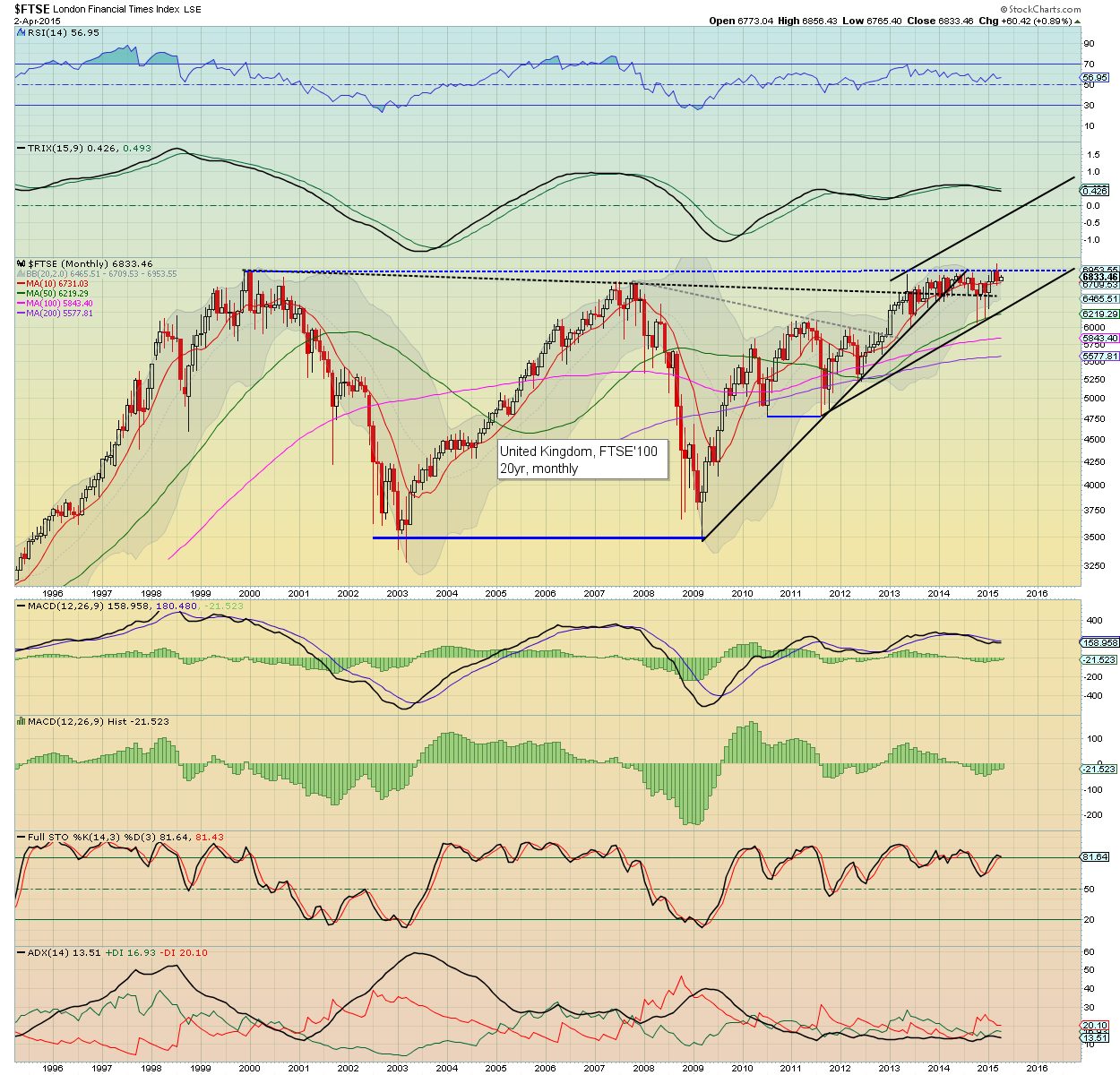 The FTSE broke the giant 7k threshold in March, although was unable to hold it, with a net monthly decline of -2.5%. Still... the Dec'1999 high was importantly exceeded, and after Germany, the UK is best positioned to withstand any EU turmoil in the coming years.

In terms of price, there is huge support from the spike low of last Oct' in the low 6000s. It is extremely difficult to envision the FTSE <6K this summer. 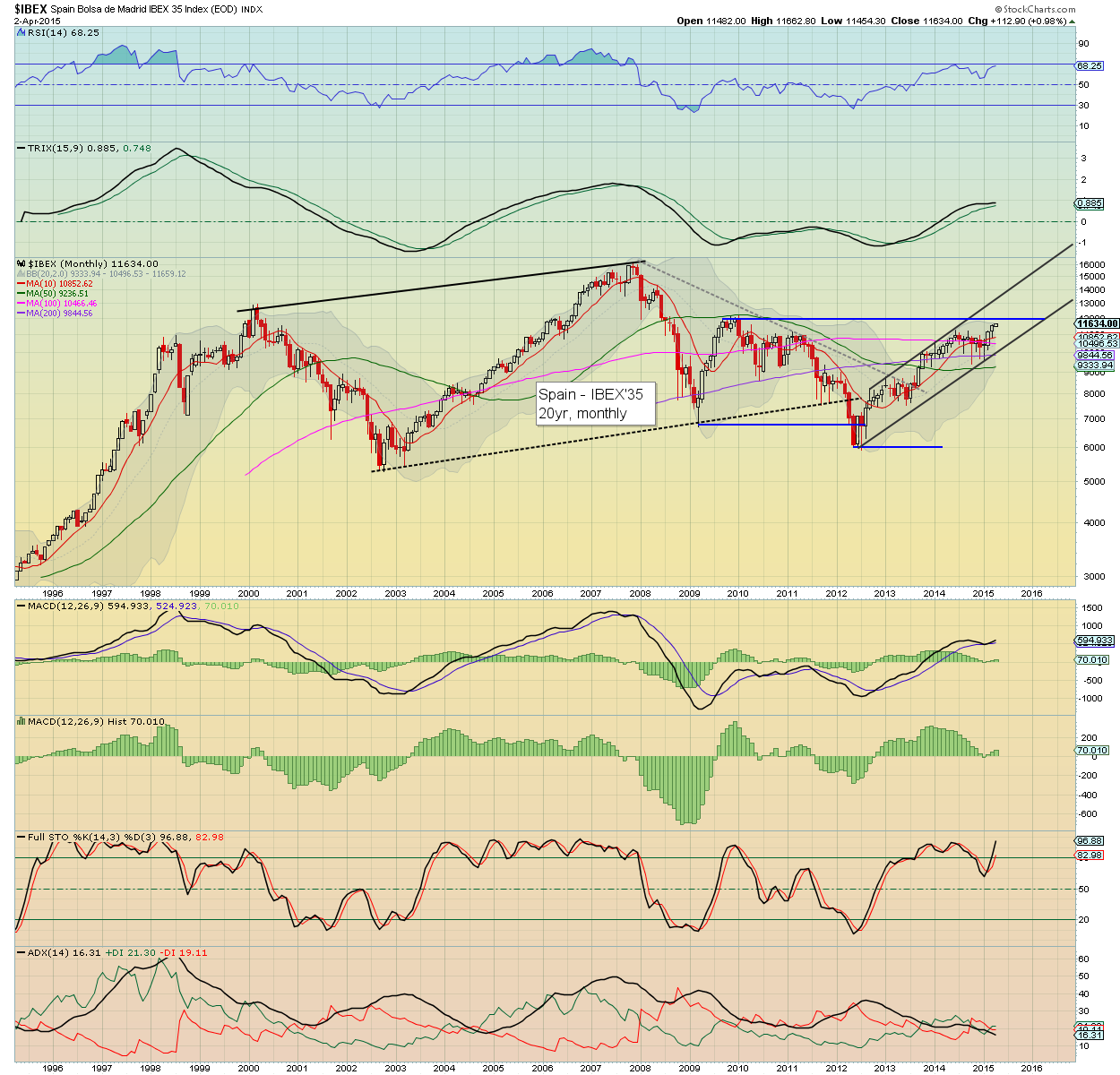 Without question, Spain is only marginally stronger than Greece in economic terms. When Greece does eventually leave the Euro, mainstream attention will immediately turn to Spain (and its neighbour... Portugal). Once the Spanish people see the Greeks trading with Drachma..... they'll be screaming for the return of the Peseta. 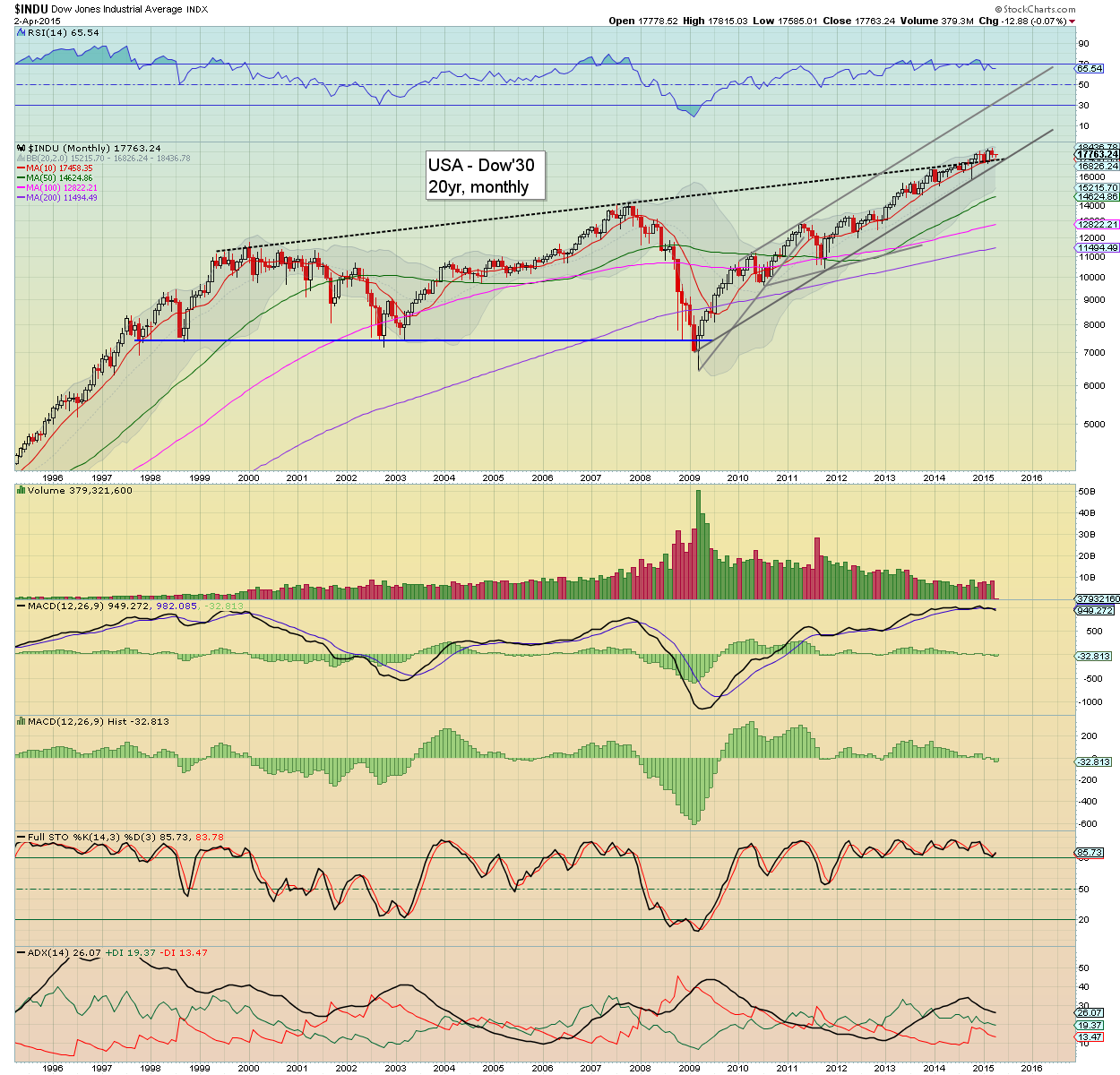 The mighty Dow climbed another 2% in March, with a new historic high of 18288. The broader climb from Oct'2011 continues, with the Dow having risen around 70% across 3.5 years.

Best 'doomer bear' downside scenario is the 15800/200 zone by late summer. Under no outlook does it look viable for the Dow to be trading <15k this year. Indeed, if the US (along with Germany and the UK) see continued inward capital flows for another two years, it is feasible to see the Dow doubling from current levels.

After all, consider this... would you prefer to put your money into a US 10yr bond... or just buy more AAPL, INTC... or even the TWTR?

Eventually, the QE/paper bubble will horrifically implode, but I don't believe a grand top will be seen this year.... and probably nor in 2016. 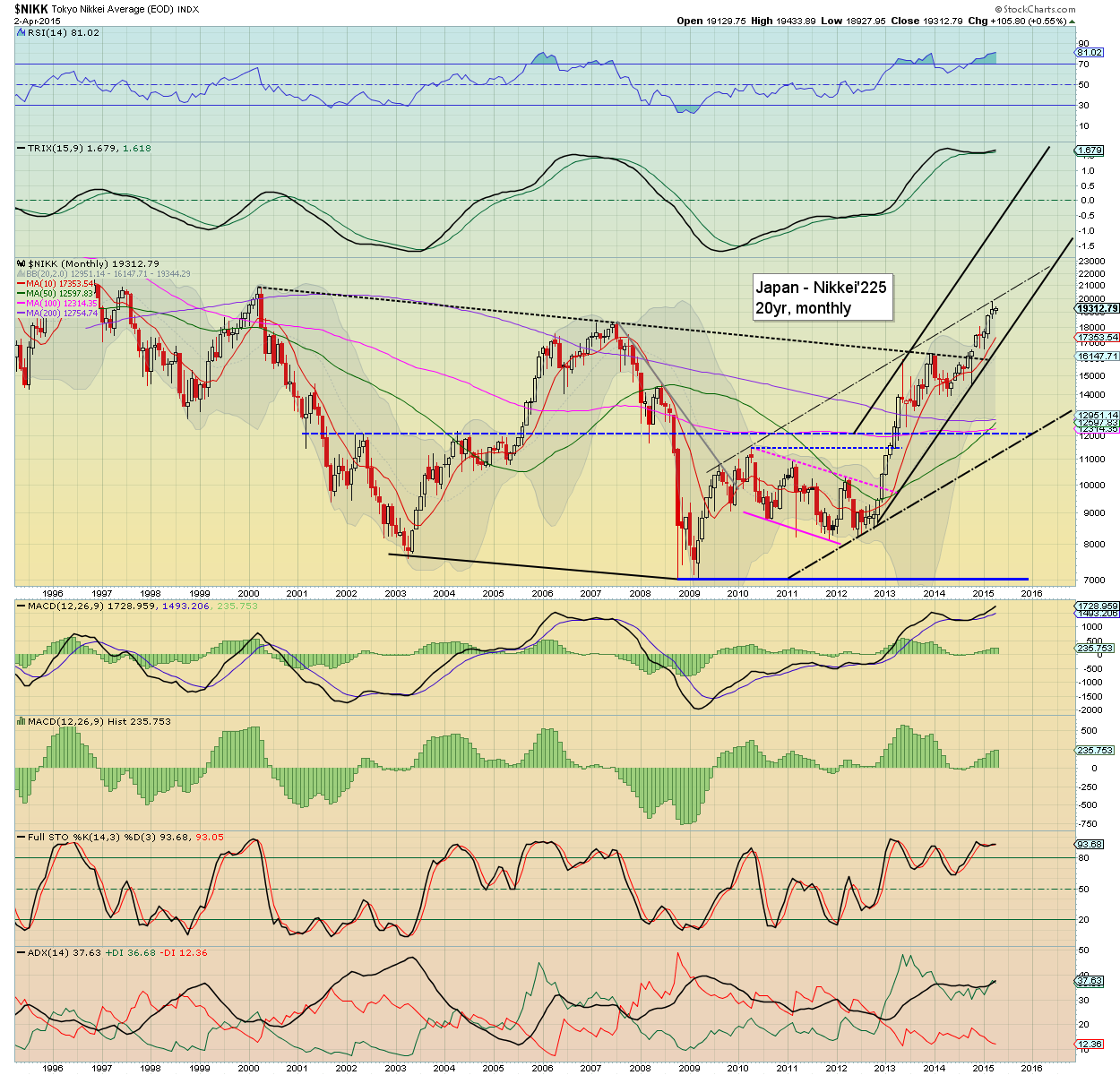 The BoJ fuelled Nikkei continues to climb, +2.2% in March, headed for the giant 20k threshold. It remains somewhat amusing to see how long it will take for the mainstream to start talking about when new historic highs (>38957, Dec' 1989) in the Nikkei will be hit. 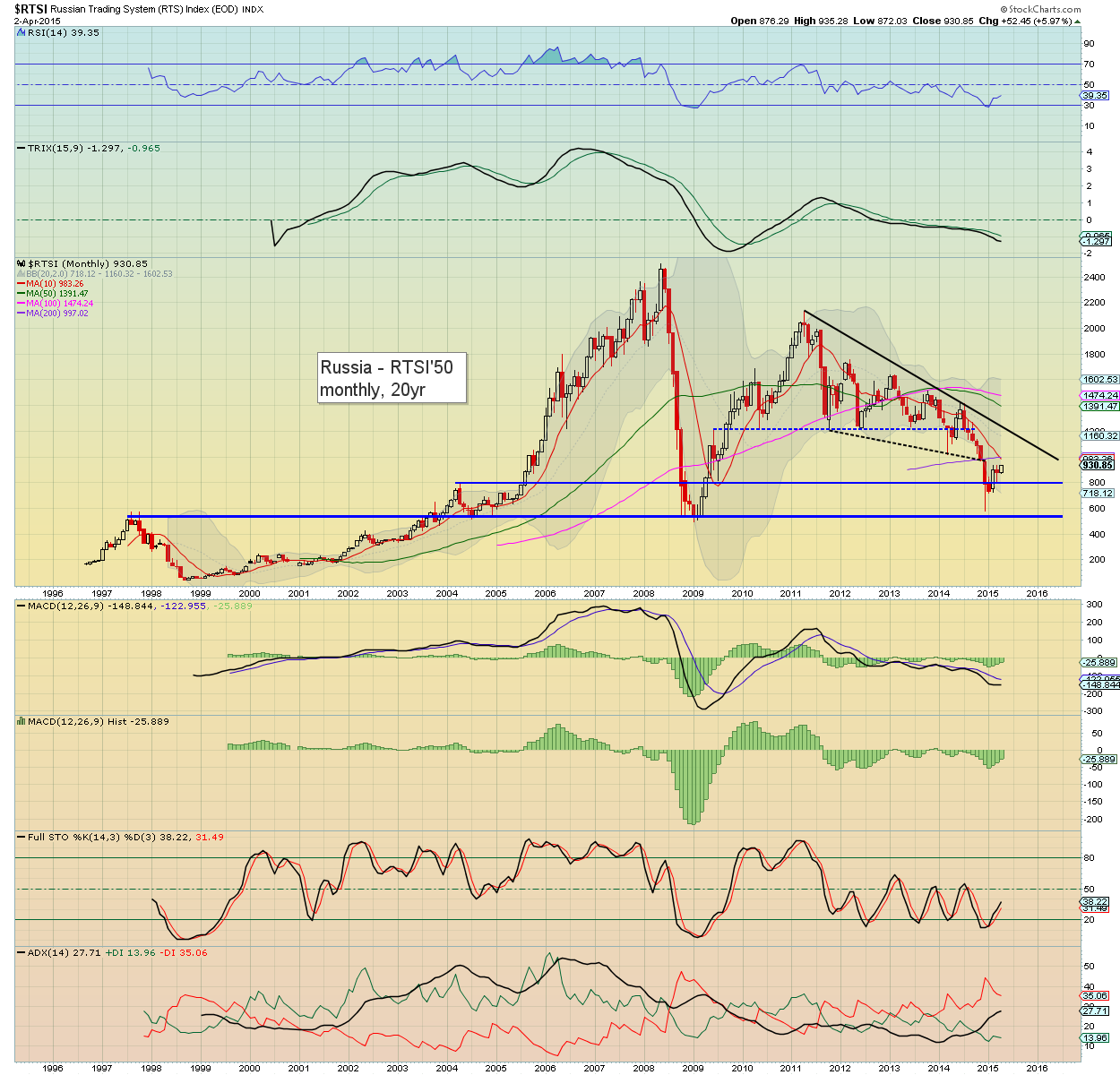 With energy prices remaining broadly weak, the Russian market is still struggling, with a March fall of -2.4%. If Oil does eventually slip to the 35/30$ zone - as I suspect this summer, then the RTSI will very likely re-test the 500s. 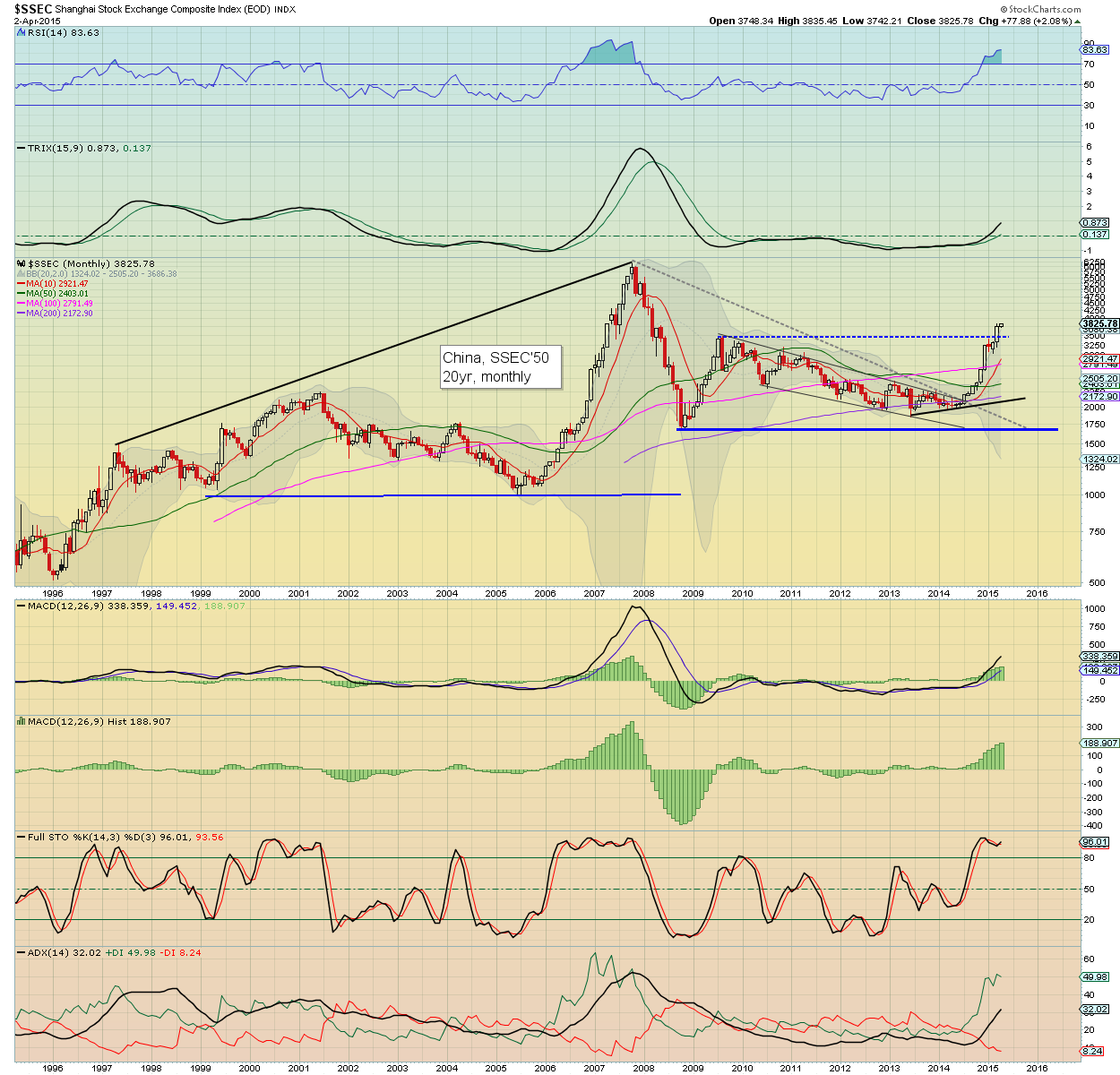 The Shanghai comp' saw a hugely decisive monthly close in the 3700s, with a huge net monthly gain of 13.2%. The door is now wide open to the giant 5k threshold by end year. Given another two years or so... 10K looks a valid target before the current QE/paper bubble implodes across the world.

Of the ten indexes I regularly highlight, we saw four net monthly declines, but with six rather significant gains.

The French CAC and the German DAX are the most curious indexes right now. Both have seen very powerful gains since last October, but are now brushing against the rising trend.. that stretches back to late 2011. Even with the ongoing (if partly failing) ECB QE-pomo program, it will be difficult for these two markets to climb at the current rate.

Some degree of intermediate pull back this summer seems probable for the US and other markets, but with bonds so unattractive, any drops will likely be relatively moderate... and especially... brief.

There are a few bits and pieces scheduled across the coming week. Arguably, the market will have a particular interest in the latest Fed minutes.

With the US jobs data being seen (at least in brief Friday futures trading)... 'bad news as bad news' equity bears can hold to some minor hope for this spring... and into the summer. Most world markets - not least the US, are due an intermediate correction... something on the order of 15/20% or so.

One really problematic scenario would be that the current equity rally will broadly continue across the summer (assuming no fed rate rise until Sept')... only to see a brief mini crash. Such an event would be extremely difficult to anticipate and trade.

At some point the global equity markets are going to break (if briefly)... I shall hold a small hope that we don't have much longer to wait.

Back on Monday :)
Posted by Trading Sunset at 21:00:00
Email ThisBlogThis!Share to TwitterShare to FacebookShare to Pinterest

Whilst the US market will remain firmly shut until Monday, the latest US monthly jobs data were a major miss. Net monthly gains totalled just 126k, with a static headline jobless rate of 5.5%. Equity futures reacted with initial moderate declines. 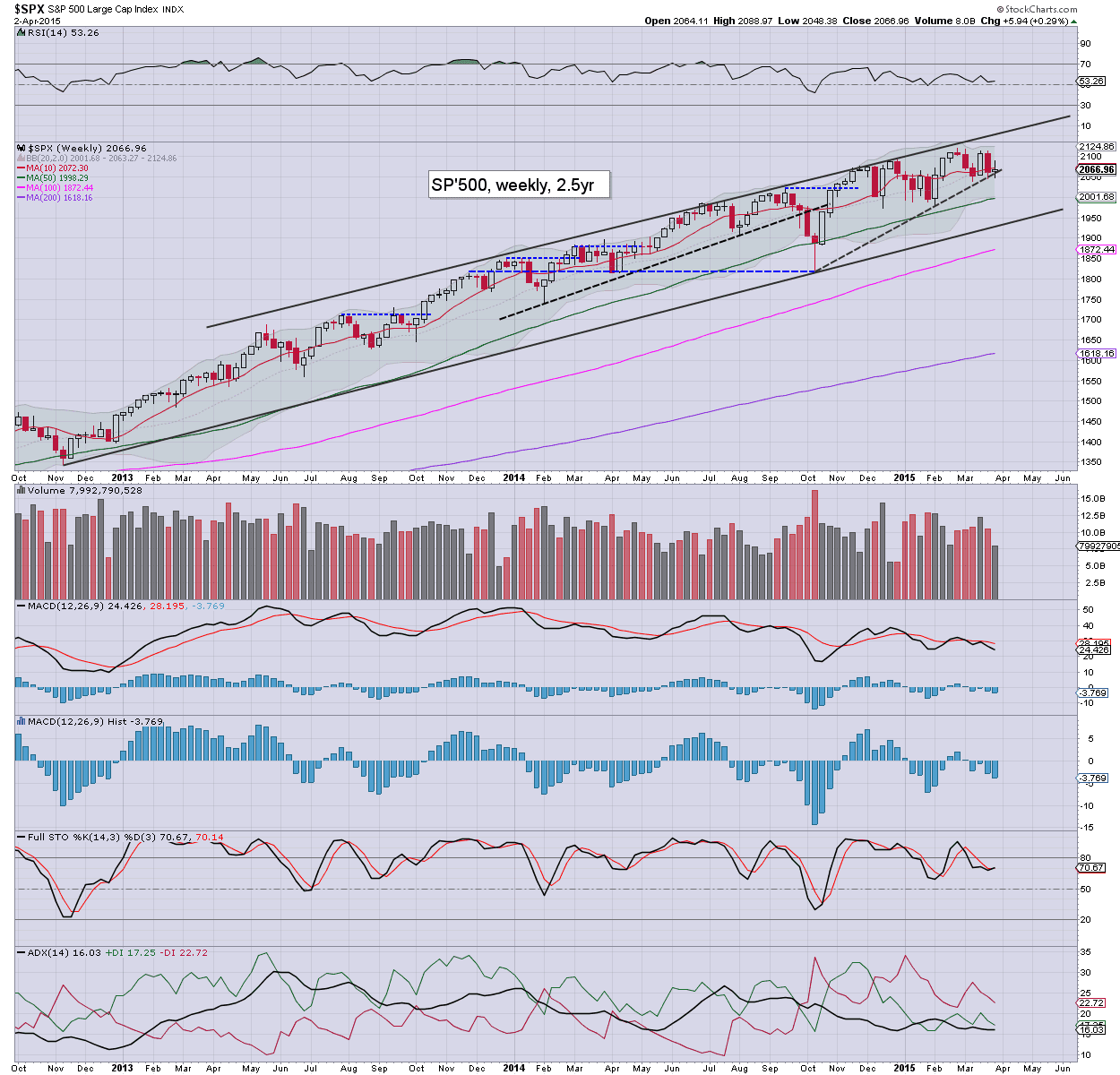 Clearly, a significant miss - market had been seeking 247k...  as Q1 across the last five years continues to.... suck.

*Also notable that revisions for Jan/Feb, totalled around -60k.
-

Equity futures were a touch higher ahead of the data, sp +1pt, offering 2068

Initial reaction was sp -7pts... offering 2060.  It would seem that at least to begin with, market is seeing bad news as bad news. Ohh the humanity!

Keep in mind, a very natural retracement of the giant ramp from summer 2014 would be back to the breakout zone of 90/87. That is clearly going to take at least a few months to play out.

From there though, upside target will be the DXY 120s... along with Euro/Dollar 0.80s... that would have some very strong negative implications for US exporters. On the flip side though, US imports will be much cheaper, making the US the place to be... at least in terms of being a consumer,


--
*the weekend post - on the world monthly indexes, will be published later today.
Posted by Trading Sunset at 13:37:00
Email ThisBlogThis!Share to TwitterShare to FacebookShare to Pinterest

Even though the US markets are closed for Good Friday, there will still be a monthly jobs report (8.30am EST). As ever, the issue is not so much what the actual number will be, but whether the market is in the mood to deem it 'good news as bad news'.. or perhaps 'bad news as good news'. 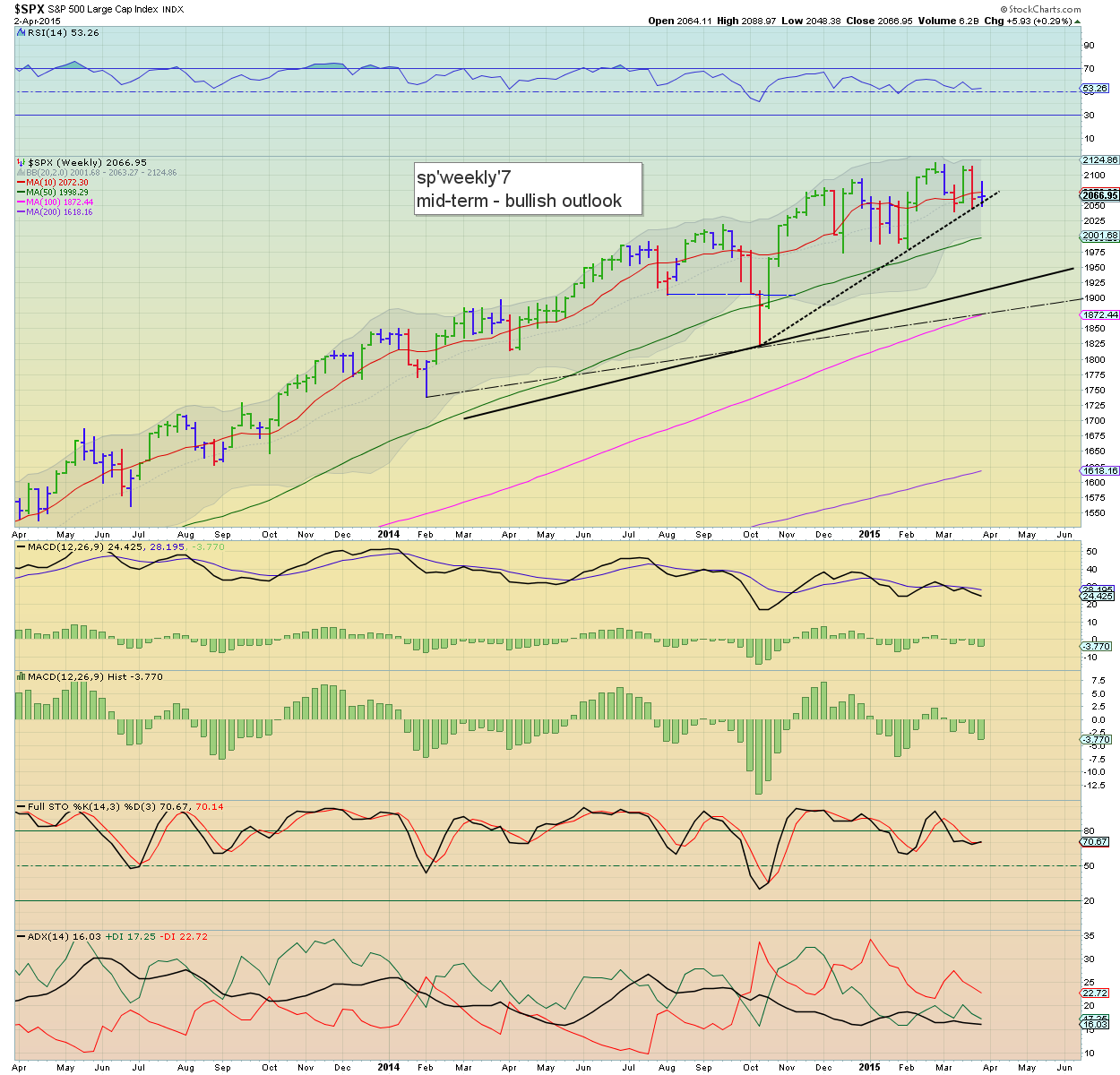 *it is notable that despite the huge Monday gains, the weekly 'rainbow' candle - which was green at the Monday close, still settled blue (threshold for red was close.. @ sp'2065).
--

Market is expecting net job gains of 247k, with a static headline jobless rate of 5.5%. Despite the recently weak econ' data, I'd not be surprised at a number above expectations.

Of course, any number much above 250k will concern the mainstream that rates will be raised at the June FOMC. That would likely see futures take a dive lower, but even then, it is a long time for the bears to wait until the Monday open.
-

A tiresome day... I'll leave it at that.

-
*there will be a post early Friday, with an update on the futures market reaction to the latest jobs data.
Posted by Trading Sunset at 04:00:00
Email ThisBlogThis!Share to TwitterShare to FacebookShare to Pinterest 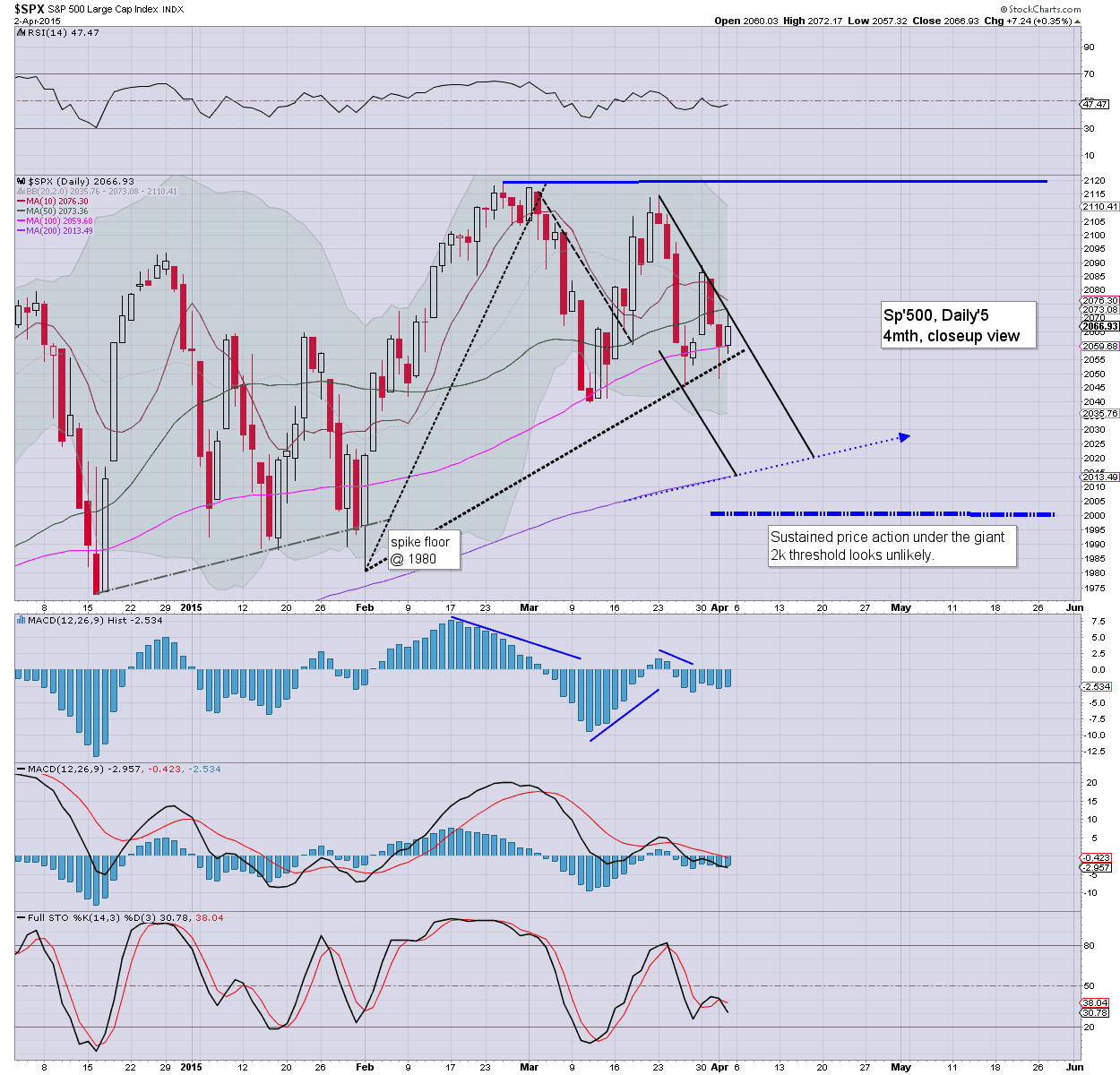 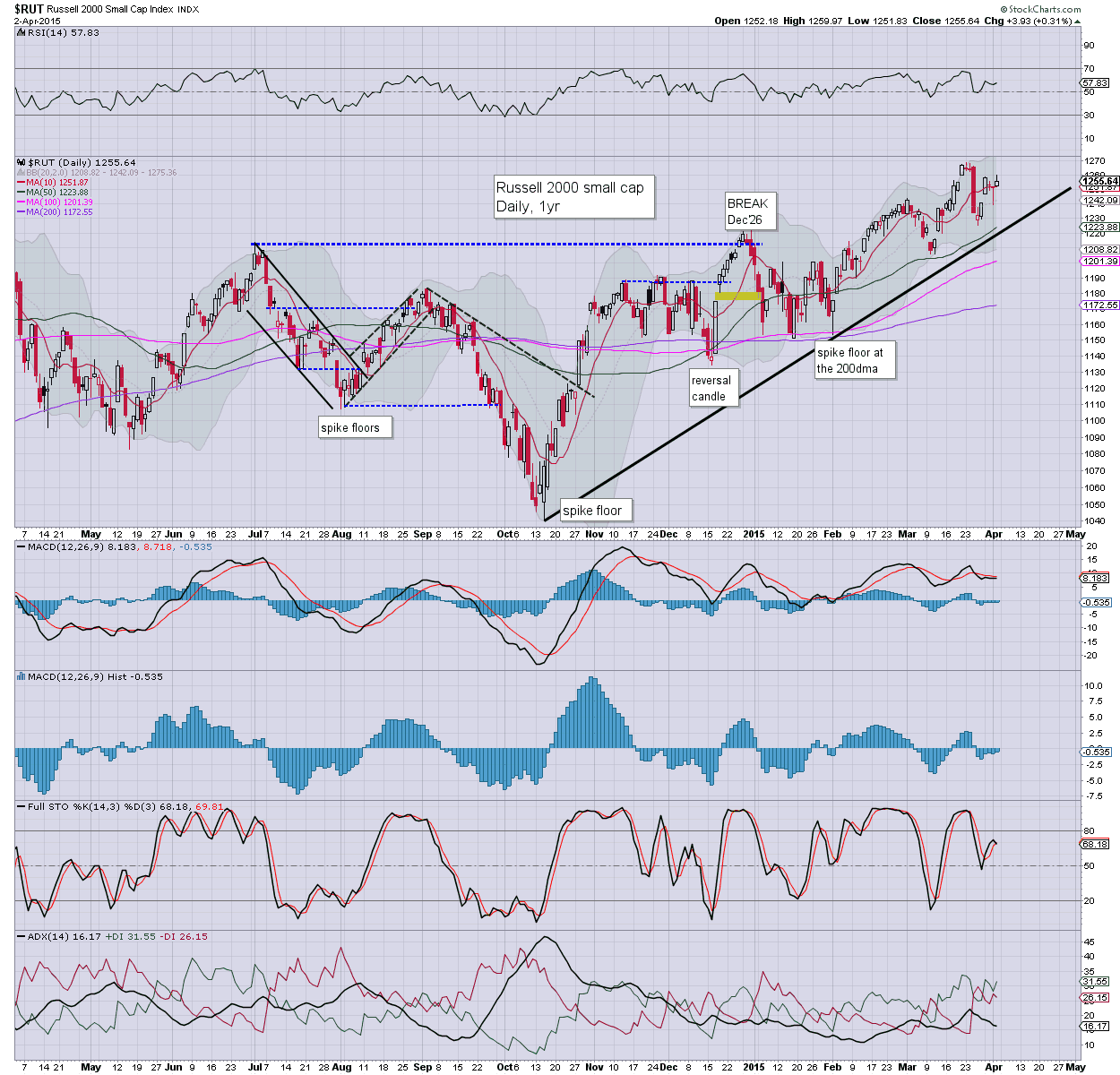 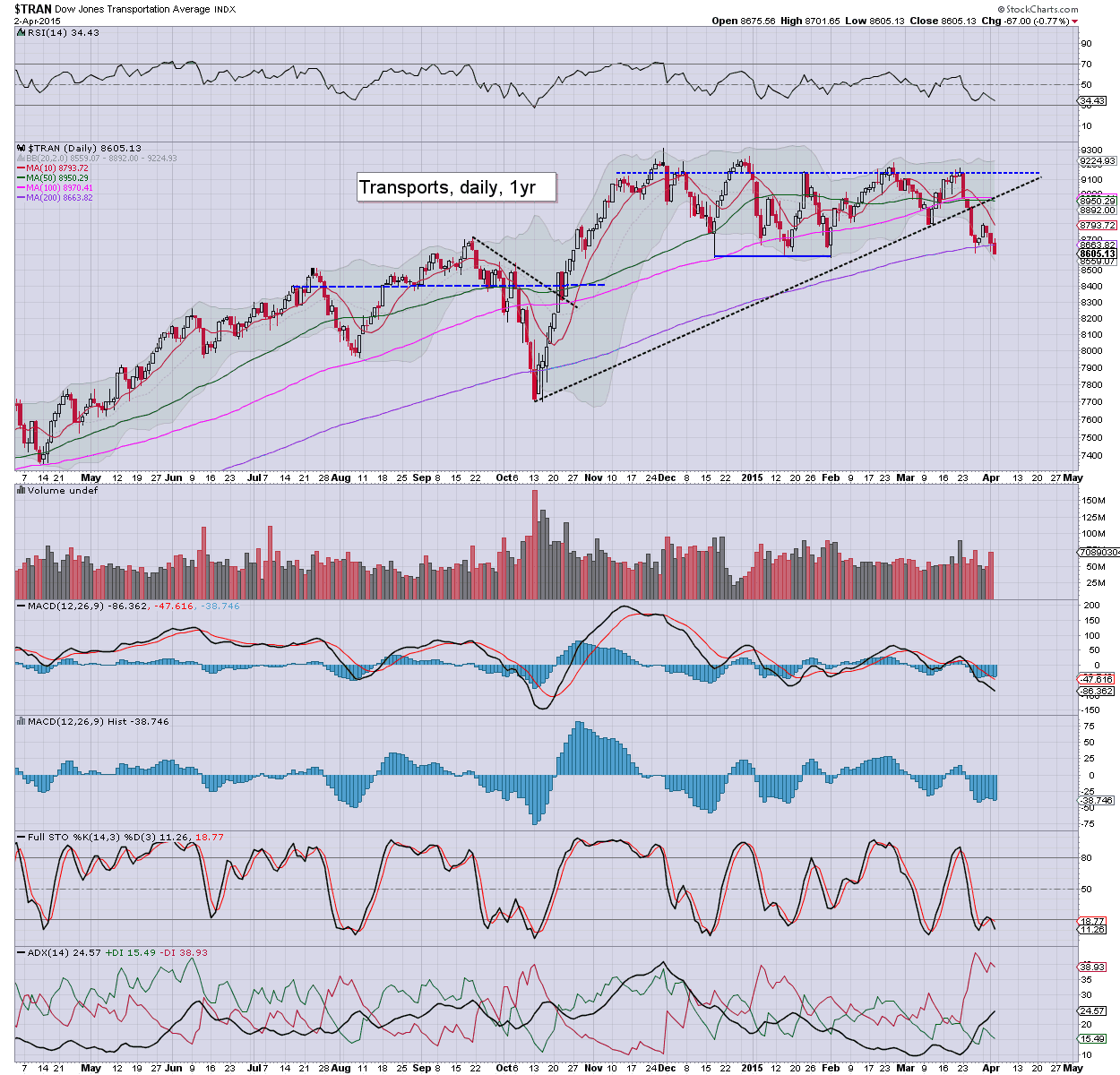 *notable weakness in the Transports.. with a daily/weekly close under the 200dma.. it bodes in favour of the bears next week, and is suggestive of a break <sp'2039.
--

There is little to add...

Best guess remains.. the sp'2039 low will be taken out.. but it will be very difficult to break the 200dma on the sp'500. Seasonally, equity bears can't have much hope of any significant/sustained weakness until late April/early May.