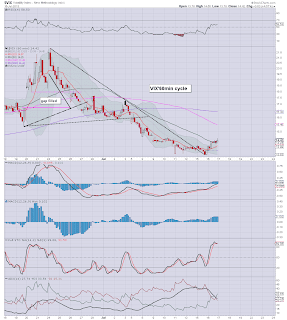 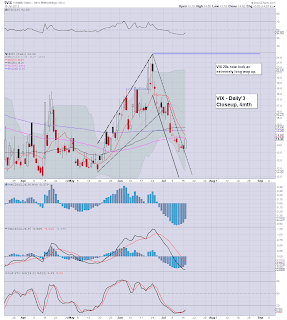 The main indexes closed moderately lower, the first negative daily close in 9 days. With the Bernanke due Wed/Thursday, and opex on Friday, we could just churn sideways for the rest of the week. Underlying pressure remains to the upside...bears remain exceptionally weak. 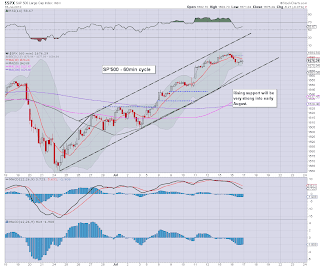 I can understand if some will call today the start of a new down wave, but really...weekly charts are still powerfully bullish, with broad upside likely into early August.
--

*I remain content to sit on the sidelines, not least with the printing maniac due for his little 'chat' with the US Govt. tomorrow.
Posted by Trading Sunset at 21:01:00
Email ThisBlogThis!Share to TwitterShare to FacebookShare to Pinterest

3pm update - ramp into the close

The main indexes have seen a rather clear 5 waves lower..and now we're in sub'3 of 'something' on the upside. Bears getting overly excited about the earlier drop to 1671, should be frankly... terrified..of a very viable sp'1700 by late tomorrow. 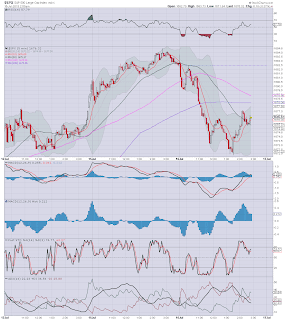 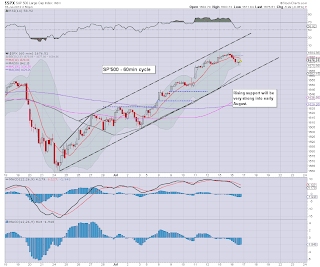 The micro-cycles are 'behaving' rather well today.
-

Upside into the close..supported on ALL cycles.
--

3.06pm..ironic how a 3pt drop in 5mins..and the bears will be getting overly excited again.

3.23pm..despite the mild bearish hysteria out there, the 5min micro-cycle is floored, and the earlier low of 1671 ..holds.

Lets see what the bulls can managed in 37mins !
Posted by Trading Sunset at 19:52:00
Email ThisBlogThis!Share to TwitterShare to FacebookShare to Pinterest

It would appear the little 5 wave down cycle is complete, with the bears managing an sp -10pt decline to 1671 - which is interestingly where the hourly charts offer first support at the lower bollinger. Moderate upside into the close seems very likely 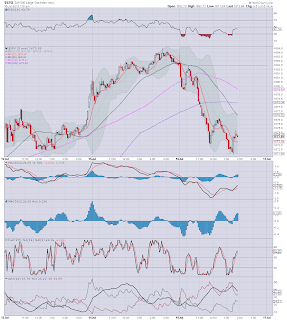 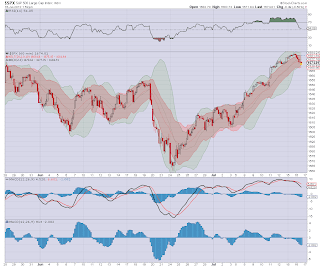 *Despite anticipating a floor, which I think will hold..I'm just not in the mood for getting involved.

Am tired of this nonsense.
--

With Bernanke speaking tomorrow, I should probably have sedatives on standby.
Posted by Trading Sunset at 18:53:00
Email ThisBlogThis!Share to TwitterShare to FacebookShare to Pinterest

The micro 5min cycle chart is offering an interesting 5 wave cycle..with the fifth wave to complete imminently. VIX is struggling with gains of just 3-4%. A close <1670 looks very unlikely, will the Bernanke inspire the market to 1700s across Wed/Thursday 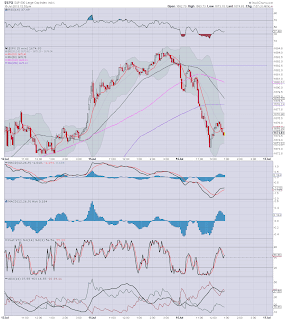 Kinda bizarre to keep in mind how a 7/8pt decline on the SP' looks like a mini-crash.

It really has come to the point where declines of 0.5% look dramatic.

--
*did you notice the new bloomberg lunch time show?  I sure miss Tom Keane....pure econ/market-chat.. now that was a lunch time show worth watching. 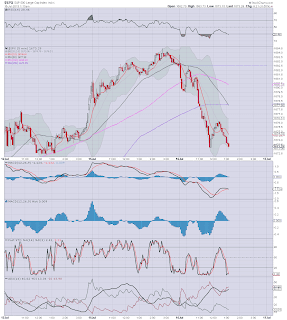 Market should comfortably hold the 1670 level, which is what the hourly index charts are saying is a floor anyway. 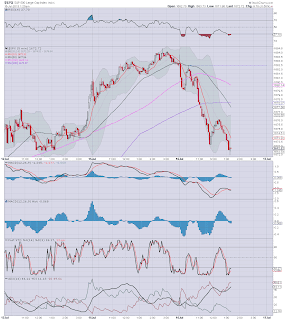 Bears look...done.
Posted by Trading Sunset at 17:55:00
Email ThisBlogThis!Share to TwitterShare to FacebookShare to Pinterest

The main indexes are collapsing..'relative' to the past three weeks of nonsense. Hourly charts are offering 1670 within an hour or two. A daily close <1670 would be somewhat 'interesting' for tomorrow. Regardless though, primary pressure/trend still remains to the upside. 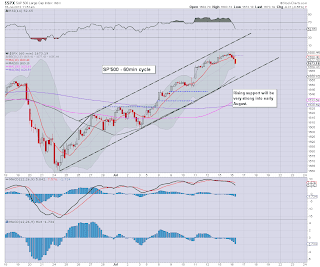 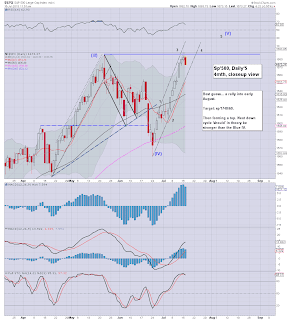 Certainly, with the Bernanke tomorrow and Thursday..and opex on Friday...this is prime opportunity for some small scale pull back...if only 1-2%


On any outlook though, we still look due for another few weeks of upside into early August.

I sure ain't in any hurry to be shorting the indexes.
-

July opex for VIX at the Wed' open...so look for August buyers across tomorrow!
Posted by Trading Sunset at 16:53:00
Email ThisBlogThis!Share to TwitterShare to FacebookShare to Pinterest

11am update - its all noise

The main indexes are all fractionally lower, but really, this appears to be the best the bears can do on a down cycle. The only moderately bearish aspect so far today is Oil, which has swung from +0.6% to -0.4%. Gold is holding gains of $7, no doubt helped by a lower USD. 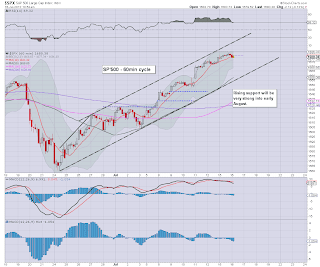 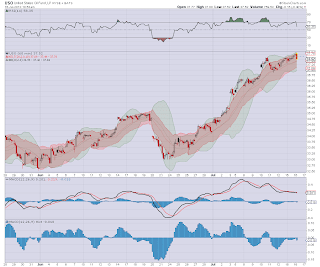 
11.10am..ohh the humanity..sp' -5pts....the drama!
Posted by Trading Sunset at 15:55:00
Email ThisBlogThis!Share to TwitterShare to FacebookShare to Pinterest

How many bears are getting overly excited by sp'500 declines of 2-3pts ? With low volume, the algo-bots have prime conditions to melt everything higher into the afternoon. Precious metals and Oil are holding moderate gains, with the USD -0.3% 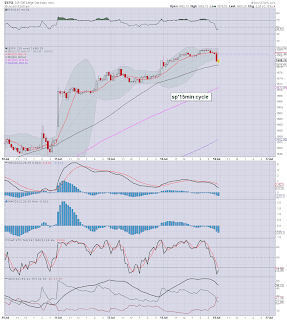 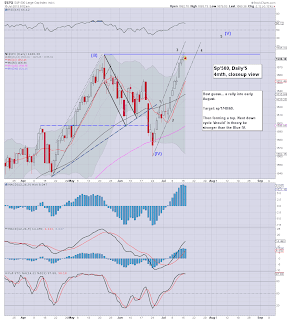 It is indeed laughable that a micro decline of 0.1%, and there will be bears who are now looking for major downside.

Yes, the daily SP' chart is looking like a viable double top, but the R2K, Nasdaq, are already above the 1687 equivalent levels.

Nothing has changed.... I'm holding to original outlook.


10.35am..Oil is interesting, now moderately red, after earlier gains of 0.5%
Posted by Trading Sunset at 14:54:00
Email ThisBlogThis!Share to TwitterShare to FacebookShare to Pinterest

Good morning. Futures are a touch lower, sp -2pts, we're set to open at 1680. Primary trend remains strongly to the upside, and there is no reason why the market won't break into the 1690s later in the day. Precious metals and Oil are both moderately higher. 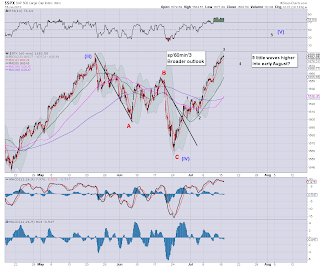 So, a few points lower at the open, but why would it increase? Exactly

Volume remains exceptionally low, and that is prime conditions for the algo-bots.
--

*I remain content on the sidelines, and I don't intend to get involved today, not least since trading ahead of the Bernanke (Wed/Thursday) is pretty risky..for both sides.

As things are, I don't think we'll even retrace below the rapidly rising hourly 50MA..currently 1655.

Posted by Trading Sunset at 13:40:00
Email ThisBlogThis!Share to TwitterShare to FacebookShare to Pinterest 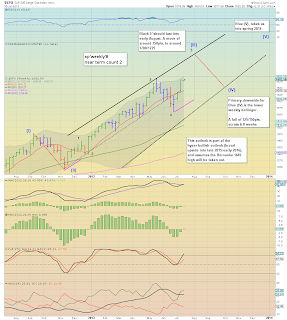 The main indexes all closed with moderate gains, on what is now day'14 of a 122pt rally in the sp'500. The May'22 high of 1687 looks set to be broken Tuesday, and if the Bernanke does not upset the market on Wed/Thursday, the 1700s look viable later this week. 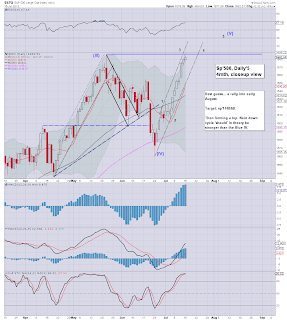 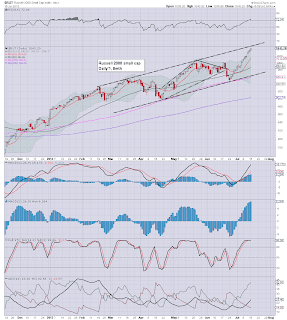 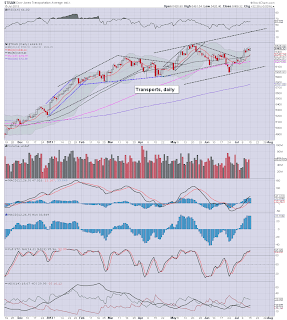 As expected, this market is no place for the bears. The underlying price momentum remains extremely strong to the upside. Even though today wasn't a major gain, it was still a worthy victory for the bulls

Upside to 1740/60 looks viable by early August, and that will make for a very toppy fifth wave.