It was the sixth consecutive weekly decline for most indexes, falling between 1.5-2.5%. Certainly, its not a 'collapse', but we sure do have the first major down wave since May-June. There are just six trading weeks left of 2012, one thing is for sure, it won't be dull!

Lets take a look at the weekly index cycles, for the six main US indexes. 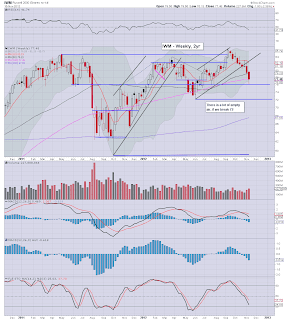 IWM hit the key 76 level, and saw a slight bounce on Friday - along with the main market. There is no sign of a turn in the general downward trend, a break into the 75s, would be highly suggestive of a swift move down to around 74-72. 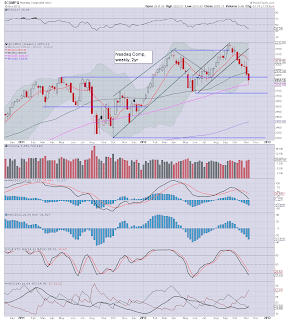 The once super strong tech' sector remains weak, and looks set to soon test the June low of 2725. If market gets upset at perceived 'unlikely resolution' of the fiscal cliff, first target is the big 200 MA @ 2450.

We are getting pretty low on the MACD (blue bar histogram) cycle though, so it would not be surprising if we see a multi-week bounce into January. 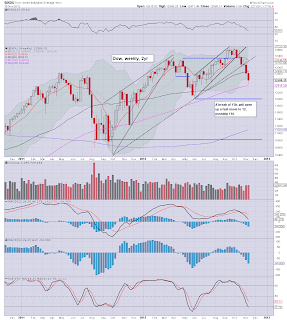 The big Dow'30 is now way below the old support of 13k. Next stop would be a challenge of the June low @12k. A failure to hold 12k would open up a swift drop to somewhere around 11250/11k - which is supported by the monthly charts. 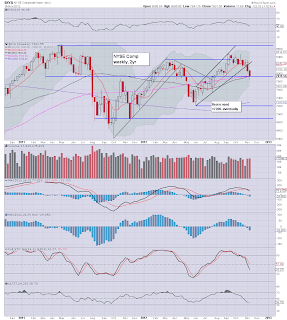 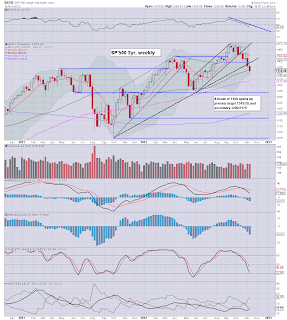 My original primary target of sp1345 was hit Friday morning, and this was indeed very pleasing to see. The next obvious target for doomer bears is an attempt to break the June 1266 low.

The monthly charts remain targeting sp'1200/1175 'sometime' within the next few months. It may indeed take until the early spring to hit those kind of levels. Yet, we do have massive market concern about the fiscal cliff, and there is also the weakening global economy.

We are kinda low on the MACD (blue bar histogram) cycle, but its possible we could drop for a few more weeks, before a multi-week bounce. 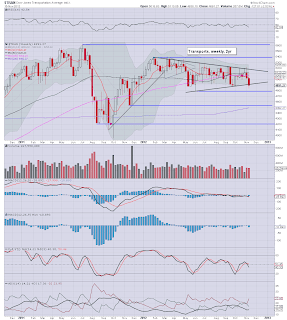 The tranny remains in an extraordinary tight trading range since the start of the year. The wedge/triangle, keeps getting redrawn by many chartists out there.

What is clear is that first downside target is a break of the 4800 level, if that occurs, there is a viable swift wash-out move lower to the 200 day MA @ 4500 - where there is also historic support from the Oct'2011 lows.

As it is, the trend remains downward, and there is plenty of downside potential on the MACD cycle.

An interesting week in market land, and one where although there remains no market panic - certainly the VIX remains bizarrely low, but where we are continuing to see relentless weakness.

The rallies are being sold into...EVERY time, which I find particularly amusing. It sure makes a change from the 'buy the QE hope' rally we saw from June>September.

QE3 was announced Thursday Sept'13, and just about every stock and index maxed out on the subsequent Friday. It would indeed be the ultimate irony if the market did indeed put in a multi-year top at sp'1474.

As many noted prior to the QE3 announcement, 'if the market is rallying on hope of QE, what happens to the market when it gets it?'. It does indeed appear that the Market got what it wanted, and is now filled with despondency, and worse, market thoughts are turning back to the fundamentals..which are looking pretty lousy into early 2013 - regardless of the looming US tax rises and spending cuts.

Of course, we can't be sure of a market top until we first take out the June 1266 low, and also put in a vital lower high on the bigger monthly charts. That process will very likely take a good 6-9 months. So, all those doomer bears looking for the 'trade of a life time', are going to probably have to wait until the latter half of 2013.

As for next week (see Friday evening posts), best guess remains moderate Monday morning gains, then a rollover into Tue/Wed, possibly flooring in the low sp'1330s. I would be looking to close all shorts at that point, not least due to the thanksgiving holiday period*

*Market is closed next Thursday, and is only open 9.30am >1pm on Friday.

I will return on Monday :)     Good wishes from London city.
Posted by Trading Sunset at 18:45:00
Email ThisBlogThis!Share to TwitterShare to FacebookShare to Pinterest

Another bearish week, more to come?

Primary target of sp'1345 was successfully hit, and now the big question is how big a bounce do we get in the days ahead. Some bull maniacs are still calling for sp'1500s by year end, whilst some of the doomers (myself included) are still open to sp'1200s by mid December. 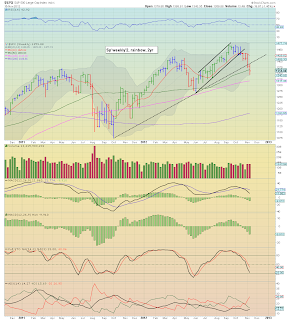 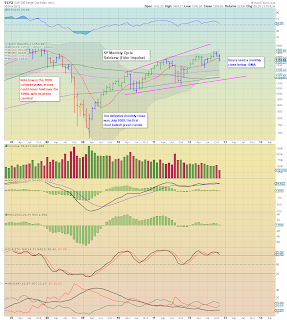 Just a short post to wrap up the week.

We have seen my primary target of sp'1345 hit, and this has been especially pleasing to see.

A bounce 'of some level' is now expected. The big question is how high will we go? The hourly charts suggest we'll max out early Monday, with a fifth wave lower prior to thanksgiving, perhaps into the sp'1330s.

We'll likely know which of the two scenarios it will be, depending on the style in which we open next Monday morning.

The best thing any of you can do, tell your other trader friends about the site. As ever, all comments are most welcome, it is always good to hear from some of you.

*there will be a weekend posting, late Saturday.

Have a good weekend..and goodnight from London
Posted by Trading Sunset at 04:00:00
Email ThisBlogThis!Share to TwitterShare to FacebookShare to Pinterest 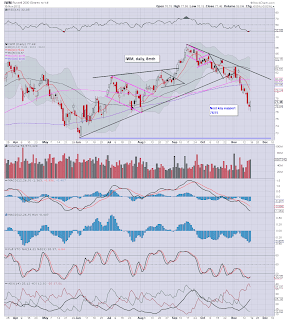 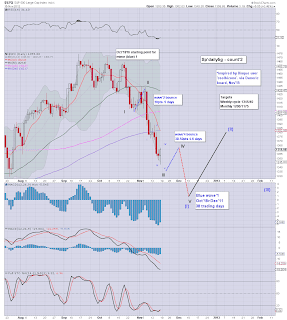 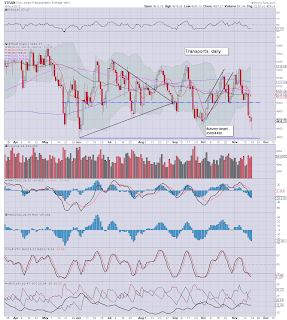 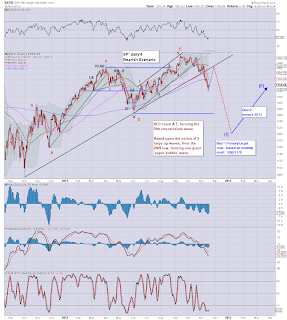