Since last August, the VIX has been in a pretty standard death spiral, all the way from 49 to 16 across 7 months.

The 4 year weekly chart gives a great view of the nonsense we've endured since 2008. The initial panic-hysteria 'OMG, its the end of the world', to the flash crash 'is it ending for real this time?'...to last summers 'surprise!, you just got downgraded' sell off. 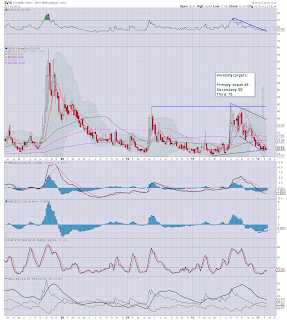 If we see the VIX break 49 at any time, the bears can start to party. A break into the 50s would likely not end there, and should offer at least a brief foray into the mid 60s. Anything above 65 is twilight zone area, and its impossible to even remotely guess if that is possible in these increasingly manipulated and HFT-induced sick markets.

So, be mindful of 49 being hit. Of course, 48/51 would make for a typical fail zone, at which point the market could floor, and then off we go again on another stupid low-vol' melt up for six lousy months. 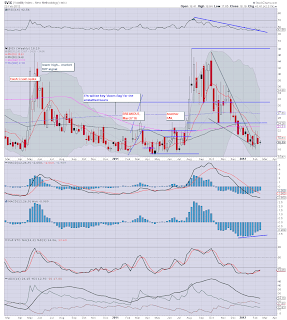 The following chart is just a rough outline of the style that many of the doomsters out there in the murky corners of the web are touting. Some have overly said it already, but many are just hinting at what they are looking for.

Lets be clear, if the wave'1 and 2 (that many chartists have touted since last summer) have been correctly identified, then 3' is obviously next. Whatever the reason for such a 'doomer 3' to occur, what matters is that a 3 would likely last 6-9 months (the 2008 wave'3 lasted 10 months), and would broadly lead to a VIX as follows... 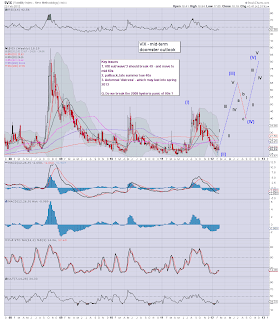 Sure, its highly improbable that the above will be even remotely the outcome for 2012, but the style would be correct, 'if' a market index '3 wave' were to occur.

I don't like VXX -its a failed ETF (or ETN?), TVIX is certainly the new traders drug of choice – volumn looks set to hit 150/200 million on the next big down day this year, whilst the VIX itself breaks back into the 30s. 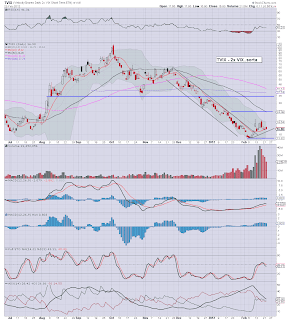 Personally, I'd be tempted for near strike April VIX calls, somewhere in the $25 strike area. For the ultra doomers, 40s would be just about acceptable (although preferably for May, or further out), but..those are crazy unstable, severely prone to decay, and will implode to zero quickly if the VIX does not break into the high 20s. 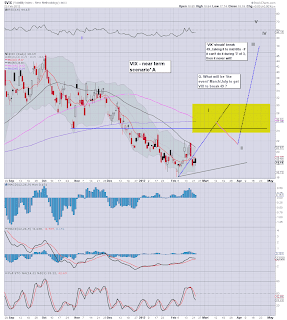 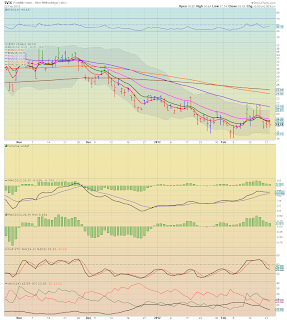 Earnings were reasonable, but it looks pretty weak as a longer term stock. The P/E is still only 6-8, that is relatively cheap/fair value. Yet where is the excitement in this company? Err, no thanks. The market does not seem to like the CEO Whitman, another year..and she probably gets the boot. 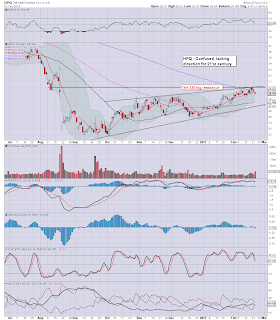 --
Well, the VIX remains something to watch in the coming weeks, the prime time for 'explosive action' would be in about 3 weeks - when the weekly cycle momentum goes positive cycle.

Good wishes!
Posted by Trading Sunset at 21:49:00
Email ThisBlogThis!Share to TwitterShare to FacebookShare to Pinterest

Two sides to every story.

So, the Irish buy up properties at insanely high prices. A significant number of them were always doomed from the start - whether by their type of job, and/or their level of income.

So...here is yet another example of normal people trying to stop the bank foreclosing. Its worth watching, a great example of people who can't pay, wanting to play the 'you can't violate my rights, even though I failed to fulfil my agreed housing contract' card.

I can't say I blame them for trying to stop the banks recovery agent. He sure dug himself a few holes, and certainly seemed muddled on a few aspects.

THEY willingly overpaid for an asset, which they probably assumed would never fall in price (after all, that's what the politicos/mainstream told them).

THEY signed a contract.

They FAILED to meet the repayments.

..and now they want to keep living there anyway...probably for free...whilst regularly shopping for more AAPL products at the local Mall.

Sure, they can whine about the bank bailouts all they like, the mortgage fraud/corruption, and their 'constitutional rights', but when it comes down to it, the average lunatic home-buyer in the 2004/07 era - who grossly overpaid for a home they could barely afford in the first place...no, they don't belong there.

I'm not saying they should get forcibly kicked out, - with the support of the local legal enforcement crew, but they sure didn't meet the terms of their contract.

Crazy mainstream populace.....and ironically...so many in society still consider a home as an 'investment'. Its NOT an investment, its a place to live. Until that attitude changes (small hope of that), we'll just get another housing bubble - even though right now, that seems so far away.

I myself didn't realise that bricks, wood, copper piping, and some roof tiles would fail to produce a net annual production of 'something'. /s

No...a  house is a drain on finances...it was certainly never a 'investment', whether via revenue generating or capital gain.

For that particular Irish home, despite the protests, there will probably be new tenants...later this summer. Maybe the new prospective buyers will decide that 10x earnings for the house is not good enough? Historically, it was always 2-3x.    ...  and will be again.


The banks must be allowed to reclaim homes

A point few have highlighted is 'what if the banks are prevented en masse from making foreclosures?

Well, then why would any EVER lend again? The only reason they lend is because they know they can make a claim on the house if the buyer fails to pay at some point.We would be looking at the collapse of the mortgage industry and the wider to-buy housing sector. Even though I sympathise with tenants such as this Irish household, they did make the choice to take out the loan. The asset is clearly not theirs, and yet they have the audacity to attempt to remain there, in some cases...permanently, without ever intending to pay anything more.

If we are ever to see any normalised housing market, the non-payers have to get the boot. Where do they go? That issue is for another time.

Posted by Trading Sunset at 14:47:00
Email ThisBlogThis!Share to TwitterShare to FacebookShare to Pinterest

Can anyone fly a plane?

I suppose at least IWM fell a bit, I want to see 80.50 by Friday – probably expecting too much.

Transport, monthly...finally showing weakness.
With 6 trading days left of February, need to see a monthly close back under the 10MA, sub'5000 level preferred. Would be a real sign for the market. 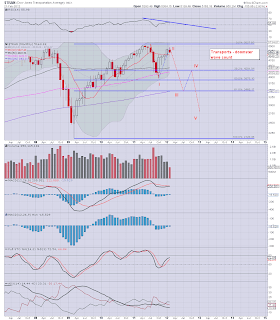 I'm really not familiar with this kinda ratio, but clearly...from a chart perspective, its a clear H/S formation.

Bears desperately need to strong momentum lower occur in March/April, and break the 2.5 level, which goes back as far as summer 2009. 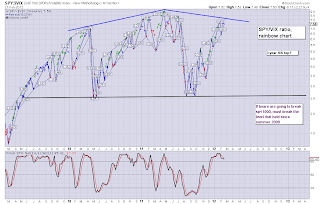 Greek news..getting tired of it.

He foresees mostly flat trading, with seemingly sector-rotation, rather than major moves.

UAL remains arguably the best one to trade, but today... LCC was the most dynamic decliner. 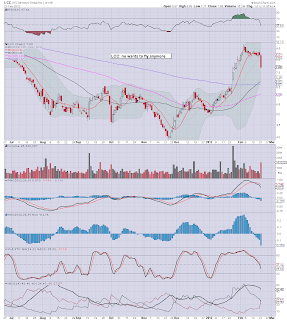 Posted by Trading Sunset at 01:48:00
Email ThisBlogThis!Share to TwitterShare to FacebookShare to Pinterest
Newer Posts Home
Subscribe to: Posts (Atom)