It was a very mixed month for world equity markets, with net monthly changes ranging from -10.1% (Brazil), +0.1% (USA - Dow), to +10.8% (Greece). Most world markets are holding within broad downward trends from spring/summer 2015, and the outlook remains bearish. 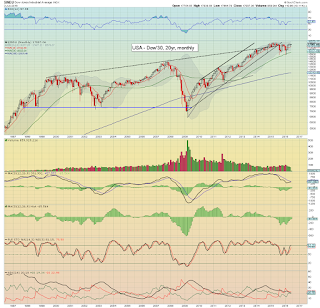 After a fair few swings across May, the mighty Dow settled with a net gain of 13pts (0.1%) at 17787. The 18K threshold remains strong resistance, with 17K as core support.

Recent econ-data remains very mixed, and is leaning towards a borderline recession. The first reading for Q2 GDP (due July 29th) will be very revealing indeed. If any print of -0.5% or worse, the alarm bells will be sounding, and the mainstream will be screaming for NIRP, along with QE4 before year end.

Best guess: increasing weakness across June, with a break <17K. A bearish June close would bode for a test (and eventual break) of the Aug'2015 low of 15370.

Considering the increasingly weak econ-data, a push to new historic highs (>18351) looks very unlikely in the near term. If the UK vote to leave the EU, and if the Fed stand down on any near term rate hike, it will dramatically lower confidence in the US market.
-- 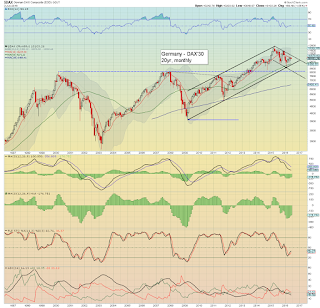 The economic powerhouse of the EU - Germany, saw a significant net monthly gain of 223pts (2.2%), settling back above the 10K threshold. Declining resistance/trend in June will be around the 10700s. If the bulls can't break above that, there remains high threat of a decline to the 8K threshold. If that fails to hold, then a more serious implosion to 7000/6500 by late autumn. 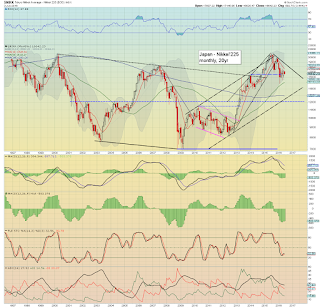 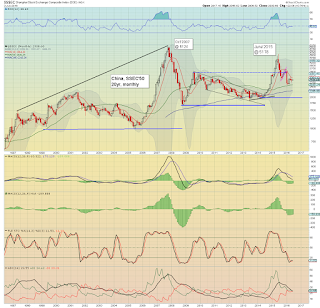 The Shanghai comp' remained weak, settling -21pts (0.7%) at 2916. Price structure is arguably a multi-month bear flag/pennant, offering the 2300/200s. Things really only get scary for the communist leadership on a break <2K, and that looks unlikely... as they would probably just make illegal all selling at that point. 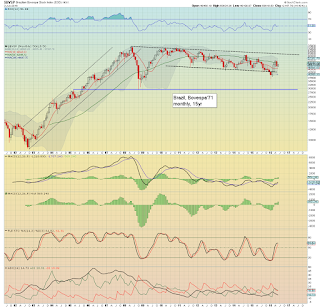 Brazil is going to become the center of world attention this summer, as the Olympics are due to be held in August. The ZIKA virus is an increasingly disturbing problem, and that sure isn't enticing some to visit the games this summer.

The ongoing political turmoil is causing a serious loss of confidence, with the Brazilian economy set to contract by 3-4% this year. If commodity prices - especially oil/gas, start to cool again, the Bovespa will be vulnerable to 30K. 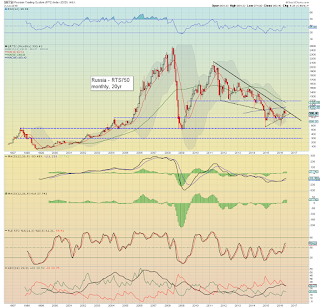 The Russian market has seen a clear failure to break core resistance of the psy' level of 1000, with a net May decline of -42pts (4.5%), settling @ 906.66. If energy prices start to cool - as seems probable, the Russian market will be especially vulnerable to re-testing the Jan'2016 low of 607. 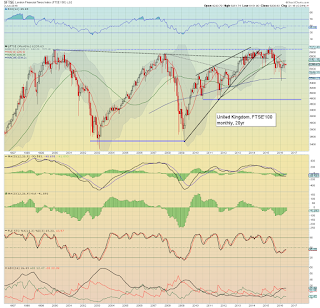 The UK market saw a minor net decline of -11pts (0.2%), settling at 6230. The 7K threshold remains a massive multi-decade resistance level. If the broader world equity market resumes lower, the FTSE should hit the 5000/4800 zone by late autumn.

Re: BREXIT. The vote is scheduled for Thursday June 23rd. The result should become clear before the US weekly close.

Right now, I'm still inclined to see the 'conservative' UK populace vote to stay. However, there is an increasing mood towards an exit. If the UK does decide to leave, it'd massively upset the UK/EU markets, and to a lesser extent.. the US.

If the UK exits, others will want to follow, not least the EU PIIGS of Portugal, Italy, Greece, and Spain. The other 'I' - Ireland, is the most friendly of nations to the EU, and would certainly stay until an eventual dissolution of the EU.
-- 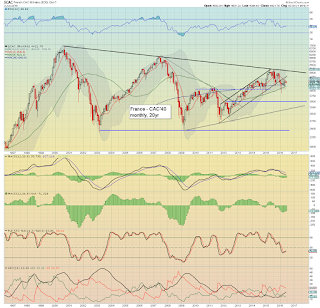 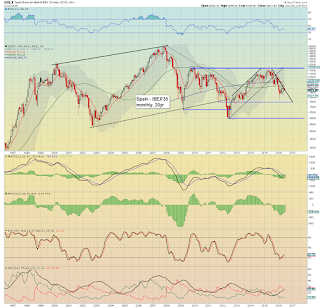 The ugliest (due to its size) of the EU PIIGS - Spain, struggled, with a fractional gain of 8pts (0.1%) at 9034. Renewed downside to 7500, and eventually 6K looks probable. It is notable that despite all the ECB QE, and various other measures, the IBEX has not been able to break above the 12K threshold, and that in itself is still a long way below the Nov'2007 high of 16040. 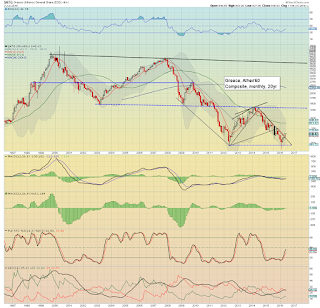 Ironically, the strongest of the world markets that I follow, Greece has broken the downward trend from spring 2014, with a net May gain of 10.8% to 646. However, the gain could merely be spurious, as the Greek economy remains a basket case... almost entirely dependent upon continued support from the Troika (European Commission, IMF, ECB).
--

A pretty mixed month for world equities, with 6 net gains against 4 declines.

All world markets remain below their 2015 highs, with most holding within broad downward trends.

Now its merely a case of whether most markets are consolidating/building a floor before a major bullish breakout... or if its just a pause (wave'2?) before some kind of collapse across the summer and into the autumn.

Best guess: renewed downside, as despite the continued actions of the central banks, the markets are unable to break new highs.

If world markets do break considerably lower, it should be clear that the mainstream will soon be screaming for interest rates to be lowered, with NIRP in the US - matching the EU/Japan. Further/increased QE seems extremely likely, with the ECB only one step away from directly buying equities.
--

I still strongly disagree with Schiff on the broader direction of the USD, as regardless of interest rates, it is unthinkable that the Euro, Yen, or British Pound, will not implode first. Always worth listening to though.
--

There isn't anything of significance scheduled this week, aside from an appearance from Yellen, speaking at the World affairs council on Monday. That will mark the last Fed official to speak (the usual blackout period) ahead of the next FOMC announcement/press conf' (June 15th).

--
If you value my work, then support me via a subscription, which will give you access to my intraday postings

--
*I will return here at 7pm EST on Monday.
Posted by Trading Sunset at 17:00:00
Email ThisBlogThis!Share to TwitterShare to FacebookShare to Pinterest 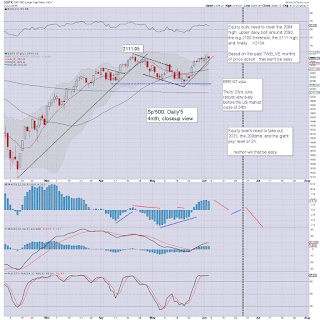 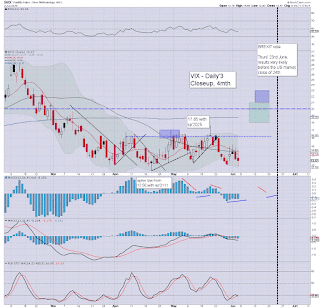 A relatively narrow trading range in this short 4 day week, from a marginal new cycle high of sp'2105 to this morning's low of 2085, and settling effectively flat (for the week) at 2099.

VIX remains remarkably low, and there was even a 'rogue print' of 12.90 in the opening half hour of trading, although few seem to have noticed.

If the short term low of 2085 can be broken, that offers at least a test of 2025 within the next week or two. Things only get interesting on a break <2025, with subsequent support at the lower weekly/monthly bollingers in the 1950/20s. 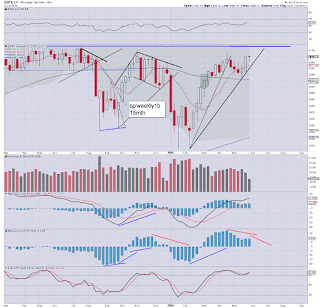 Effectively, a flat week, with a marginal new short term high of 2105. Underlying MACD (blue bar histogram) offers high threat of a divergent lower cycle high. As things are, best chance of a significant down wave looks viable in 2-3 weeks.