With the main indexes rallying back from morning lows, the VIX failed to hold moderate gains, and closed -1.6% @ 12.97. If the sp' manages to break into the 1700s within the next few days, VIX looks set to slip into the 11s, before the next multi-week VIX up cycle. 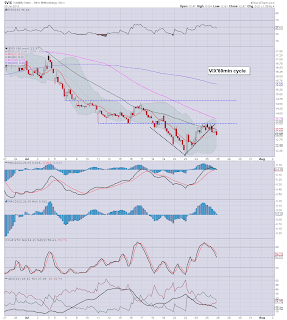 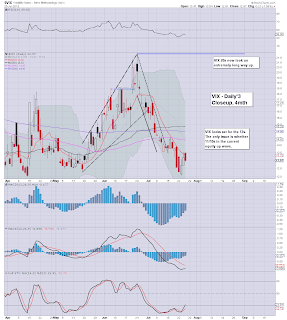 The market is still broadly rallying - despite a touch of weakness in the past few days.

The underlying MACD (blue bar histogram) cycle ticked higher for a third day, and this is indeed a good sign that the bulk of the current equity up wave is done.

The main indexes closed somewhat mixed. The R2K was pretty strong, +1%, whilst the Transports saw a rather strong turn from early lows to close flat. Near term trend remains to the upside, and the QE is no doubt helping keep this charade going. 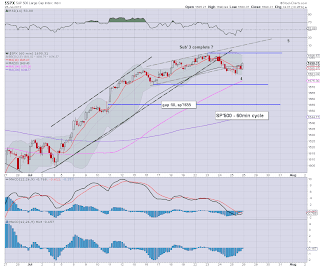 Just another day of nonsense in the worlds most rigged, twisted, and nasty casino.

It remains impossible to know whether sub'4 is done..or not, but I'm guessing it has.

--
the usual bits and pieces across the evening.
Posted by Trading Sunset at 21:01:00
Email ThisBlogThis!Share to TwitterShare to FacebookShare to Pinterest

The main indexes are holding minor declines, with the sp -4pts @ 1681. No doubt many will be calling 1698 an intermediate top, but then, every up wave have been under-estimated since 2009. There remains little reason why we won't keep rising into early August. 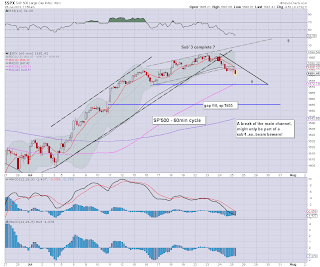 Today is largely just another complete waste of time for the bears.

Stocks like FB, BIDU..and so many others are all rising on 'better than expected' earnings. The fact that such expectations have been a massively lowered across the last few months..is entirely irrevelant.

This situation, both in terms of corporate earnings, and econ-data, doesn't look likely to change for a very long time.

For most out there, it has to be asked, why bother with this crap any more?


back later..
Posted by Trading Sunset at 16:55:00
Email ThisBlogThis!Share to TwitterShare to FacebookShare to Pinterest

11am update - underlying pressure remains up

The main indexes are mixed, sp is flat, but the Transports is -0.8%, and the R2K is now +0.2%. Considering the QE, and recent few weeks, there is no reason to not expect the market to close at least moderately higher. VIX looks similarly maxed out on the hourly cycle. 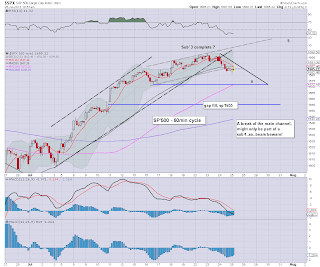 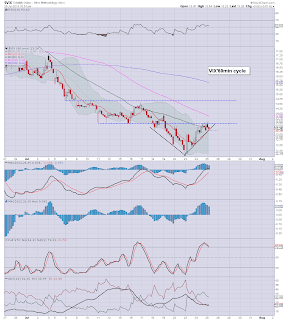 Little to add, on what is just another stupid day.
Posted by Trading Sunset at 15:53:00
Email ThisBlogThis!Share to TwitterShare to FacebookShare to Pinterest

10am update - time for some QE-pomo

The main market has opened with moderate declines, but we're already seeing a turn back upward. With a very large QE-pomo of $4bn or so, bears have a real problem today. Hourly index charts are offering potential upside all the way into the weekend. 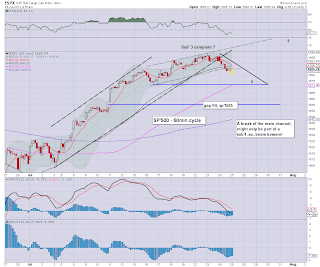 I'd refer anyone to the MACD (blue bar histogram), which is very low on the cycle, and we're most certainly due another up wave.

With the QE this morning, I have to believe the market will battle back into the sp'1690s, a close in the 1700s is even in range.

Good morning. Futures are moderately lower, sp -4pts, we're set to open at 1681. Precious metals are a touch weak, whilst Oil is -0.5%. Facebook is set to open +23% in the mid $32s. Bulls can look forward to a large QE-pomo of $4bn to help turn this market back upward. 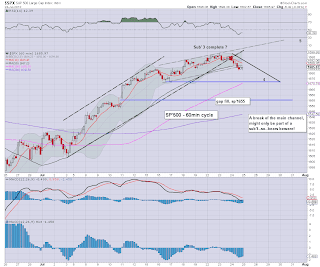 So, it looks like we'll have some slight follow through to yesterdays small decline. Is this all part of a sub'4 wave?

As ever, we'll only know for sure in retrospect, and probably not until the middle of next week.
--

Hmm.
Posted by Trading Sunset at 13:30:00
Email ThisBlogThis!Share to TwitterShare to FacebookShare to Pinterest

The main indexes closed moderately lower, and today's little decline could merely constitute a sub wave'4 of the broader powerful move from the sp'1560 low. The market looks set for at least one further wave higher, probably lasting into early next week. 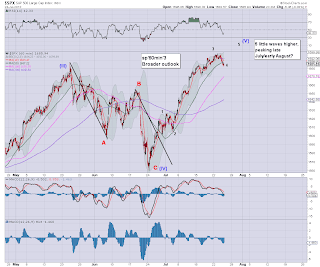 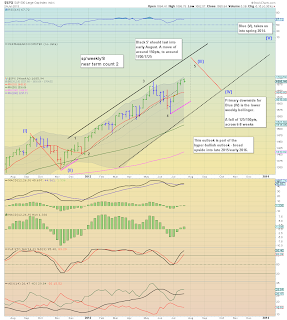 Guessing the smaller waves of this twisted and nasty market remains something of a pointless exercise. Still though, I'll keep on trying..as the above charts show!

More than anything across the last few years, as someone who has read many thousands of well thought out postings, I've come to realise one thing. The 'typical' chartist out there generally under-estimates the duration of the up waves. This is especially the case for the 'doomer bear' chartists, even those who can stomach trading the up waves.

The current surge from sp'1560 is now over 4 weeks old, and really doesn't show much sign of ending. The weekly 'rainbow' chart is showing the fourth consecutive green candle..and this market is unquestionably in an outright bullish situation.

I will be delighted if we are indeed seeing a sub'4 play out, with a sub'5 to complete before the FOMC of next Wednesday. Yet, I have to note, its merely a guess, and its possible this rally will drag out into early August - which was my original outlook.

Broadly speaking, I'm still looking for a return to the sp'1550s in late Aug/early September, before renewed ramp (baring the end of QE) into spring 2014.

There is the usual weekly jobs data, but more importantly, there are Durable Goods orders. So long as that comes in 'reasonable' the market should be able to push back into the 1690s.

*there is a very significant QE-pomo of around $4bn tomorrow, so bears beware!
--

The main indexes closed moderately lower, with the sp -6pts @ 1685. The two leading indexes, Trans/R2K, fell by a more significant 1.1% and 0.8% respectively. Indeed, the R2K looks particularly bearish right now, having turned/rolled over at the upper channel. 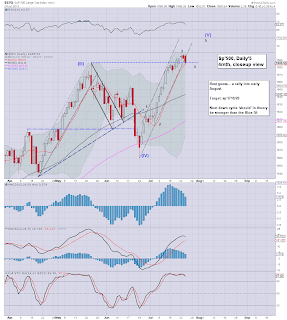 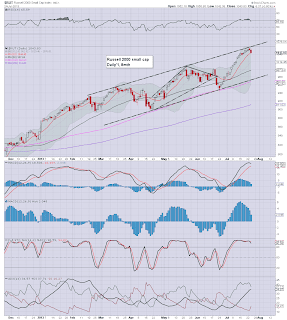 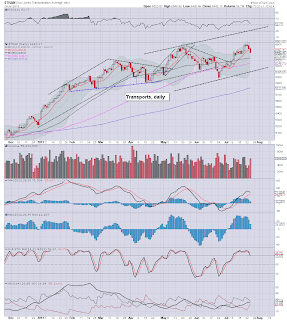 So...moderate declines for the headline indexes, but more interestingly, we have somewhat bearish turns apparent in the Transports..but especially so, in the Rus'2000.

Is this it for this up wave? Unquestionably, the Trans and R2K are the market leaders, and they are both now slipping lower.

My only concern is that this is merely a sub'4 of the wave from the sp'1560 low. If that is the case, then we are set to see one very final lurch higher...perhaps to the sp'1710/20s early next week.

*I am holding long-SLV overnight (gods help me)