With the indexes seeing a significant opening gap over the key sp'1448 high, the VIX dropped sharply at the open, and the closing hour action was equally bad. The VIX closed -18.5%, to settle @ 14.68 - which is the lowest VIX level since mid October. 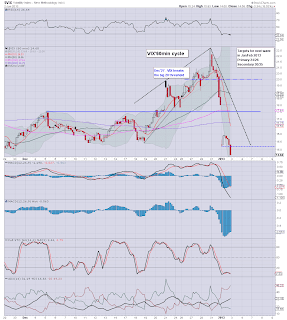 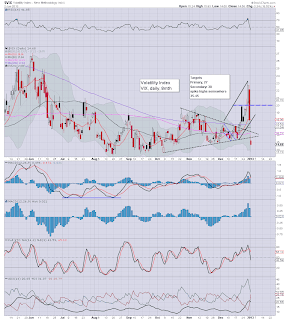 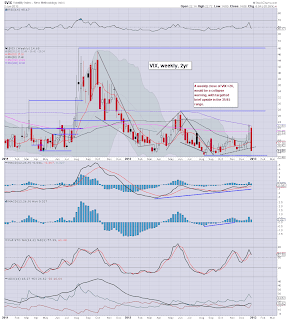 On the weekly chart, it is incredible to see a decline of 35% in just two trading sessions. It is one of the biggest declines we've seen since October'2011. With two trading days still left of this week, how low will the VIX go?

VIX in the 13s seems likely..if only briefly.

The main indexes closed in a very bullish manner, and it is impossible to project just how far this rally will go. On any outlook though, we'll probably see underlying momentum continue to strengthen for at least another 2-3 days. 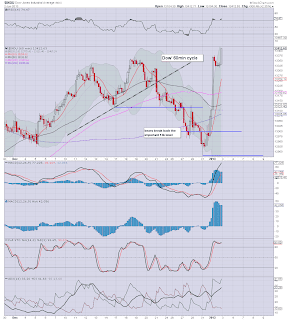 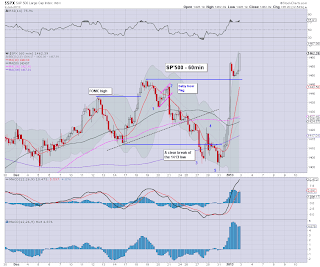 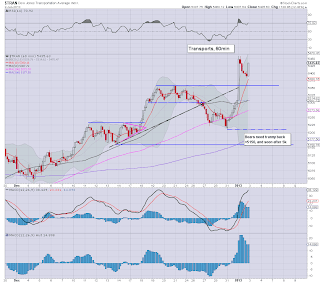 Even though I touted 1460s a mere hour ago, I am somewhat surprised to see them.
--

The Monday open of sp'1398 now looks a very long way down, and it took just 8 trading hours for what is a very significant 4.5% move

With the VIX smashed down to the 14s, the old bullish hysteria is back...but for how long?

The usual bits and pieces across the evening.
Posted by Trading Sunset at 21:03:00
Email ThisBlogThis!Share to TwitterShare to FacebookShare to Pinterest

The market is holding onto 80/85% of the gains, and there is no reason to expect any late day selling. Quite the contrary in fact, we could yet close at the highs of the day, and if the algo-bots want to really upset those bears re-shorting earlier today..they'll make a charge for sp'1460s 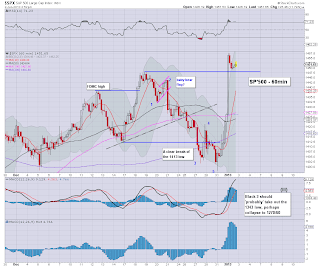 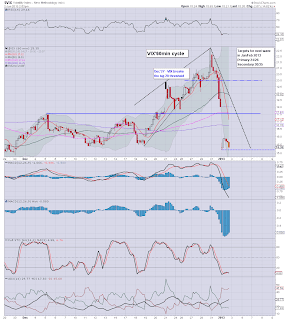 There is plenty of interesting action going on in individual stocks, not least the coal sector which remains in a bit of a mess.

On any basis, the more conservative doomer bears will leave this market alone across the weekend, and at least wait..into the middle of next week.
-- 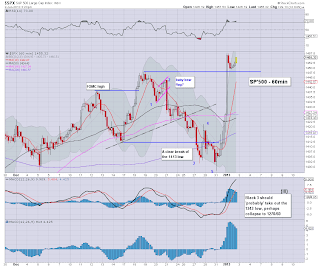 back after the close.
Posted by Trading Sunset at 19:54:00
Email ThisBlogThis!Share to TwitterShare to FacebookShare to Pinterest

We're still holding the sp'1450s, and with the VIX back in the 15s, everything is bullish..right? Congratulations America on your fiscal conservatism, and long term budgetary planning. At this rate of progress, you'll be at the standard of the EU in no time! 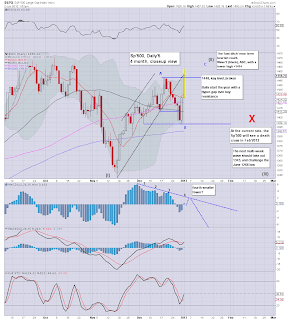 So..holding in the 1450s, and even if we break into the mid 1440s..its nothing for the bulls to get concerned about.

To my own pleasant surprise, even yours truly - perhaps one of the most impatient traders on the NYSE, is feeling no impulse to re-short.

Perhaps..Friday..but..far better...next week, and even then, that's only if things appear exhausted. 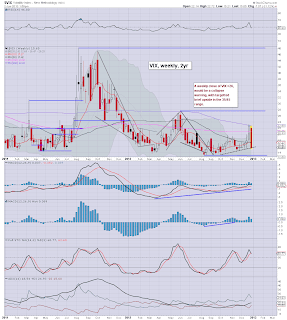 an incredible candle, and we've still two full days left of this week!
Posted by Trading Sunset at 19:00:00
Email ThisBlogThis!Share to TwitterShare to FacebookShare to Pinterest

On any near term outlook, it looks like the market will be churning around sp'1445/65 for the rest of this week. Interestingly, that would still be below the mid Sept QE highs. However, the R2K and the Transports have broken above key cycle highs. 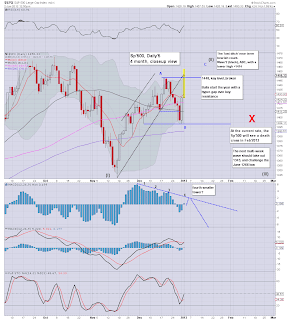 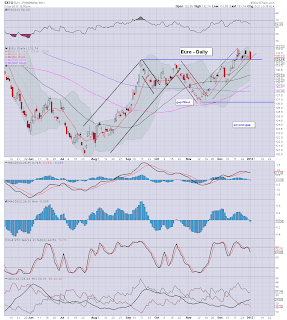 I am going to seek a fourth smaller tower on the MACD (blue bar histogram) cycle - see daily chart.

Even if market prices remain flat from current levels into the weekend, we'll see that cycle crawl higher until at least until Friday.

A clear rollover - even if we get one, won't be clear until next Tue/Wednesday at the earliest.
--

*its notable that the Euro has slumped from the earlier high, and the Dollar has similarly recovered, and is now fractionally higher.
Posted by Trading Sunset at 17:52:00
Email ThisBlogThis!Share to TwitterShare to FacebookShare to Pinterest

We've seen some major levels taken out today, and many of the weekly and monthly charts are now arguably outright bullish. The sp/dow remain lagging though, and until we see >1474 and dow 13700s, I'll be somewhat suspicious of this bullish open to the year. 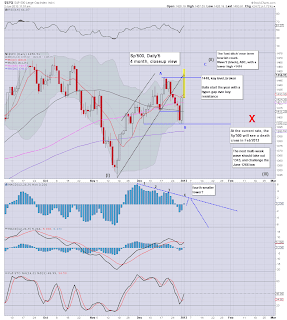 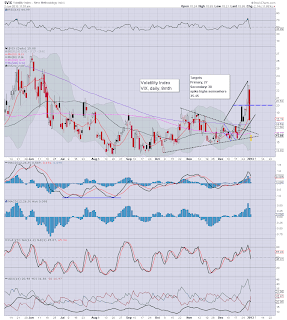 VIX is essentially destroyed, and will probably take a few days to stabilise in the 15s. I don't think we'll see anything <14.0, even if we break into the sp'1460s.
--

See the daily MACD (blue bar histogram). Its just a vague notion I am keeping mind. Although the R2K and transports would strongly argue against it.
---

Coal miners, not sure whats going on here, but there is a major reversal underway.. 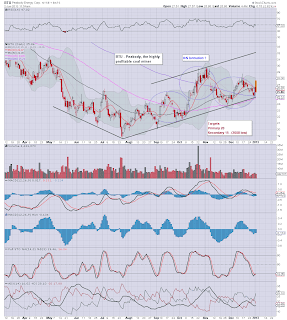 BTU and ANR looking a bit of a problem. Did the sector just get downgraded?
---

*
*Poster, fulleralpha.. I'm still getting messages from you, but they appearing in the default blogger comments system, which will NOT appear here.

You need to allow disque comments to display, change your cookie settings or something are.

Nothing else I can suggest.
--

The market is now moving into a few hours of likely minor chop, before finding another higher floor. More importantly, we're seeing some massively important breaks to the upside, lead by the Rus'2000 and the Transports. 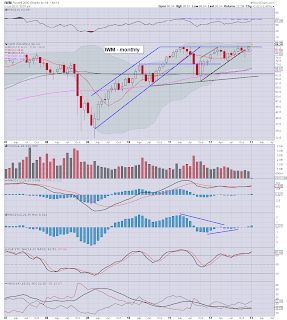 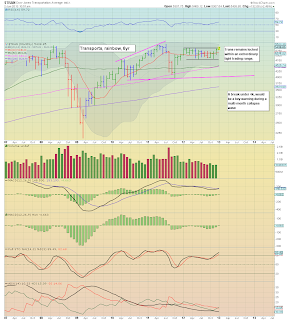 The doomer bears should take a long hard look at those two charts for an hour, and just consider that both indicate a possible market moonshot..beyond the dreams of the most delusional bull maniac.

As I said for all of the past year, the direction in which the tranny breaks..will be a key signal.

I remain on the sidelines...which frankly seems the simpler thing to do.
--

I've checked, and it seems to appear fine for me, but I'm still getting comments posted on the default blogger comments.

poster 'fulleralpha', do you have disque on block or something? Since Disque is active on these pages, anything you post on the default blogger comments will not appear.
--
Posted by Trading Sunset at 15:53:00
Email ThisBlogThis!Share to TwitterShare to FacebookShare to Pinterest

10am update - a new year, a new bear massacre

Those bears holding since the Monday open have suffered a severe 8 trading hours of nuclear carnage. We've jumped from sp'1398 to 1455..and there is NO sign of this freight train stopping. With the dollar lower, and the VIX back in the 15s...this is a disturbing way to start the year. 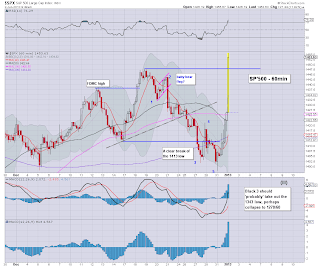 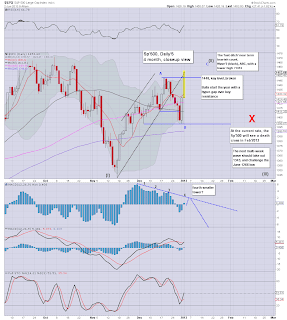 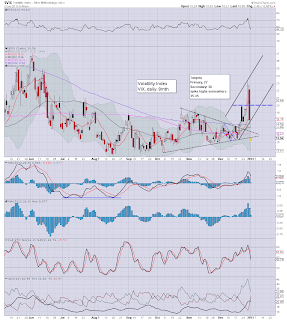 There is a LOT of action to highlight right now, but suffice to say, this is one hell of a crazy way to start a new year.

For me, worse of all, I can only imagine the horror of the TVIX/UVXY holders, they're down around 45% since the Monday open.

I remain on the sidelines...with NO intention of getting involved in this nonsense for at least a few days.
--

re: comments. I'm not sure why, but Disque is not taking comments on my page so far today... sorry for those who have posted, but not see it appear. I'm not sure what to do about it.
--
Posted by Trading Sunset at 14:52:00
Email ThisBlogThis!Share to TwitterShare to FacebookShare to Pinterest

Good morning, and welcome to the first trading day of 2013. Futures are soaring after the can got kicked yet again..if only for 2 months or so. The sp is +24pts...we're set to open around 1450, and this is indeed a clear break above the important 1448 level. 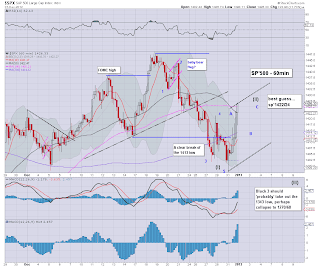 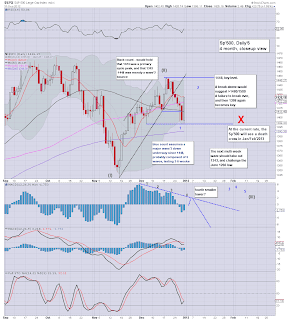 So..we're going to see a hyper-gap at the open, above the peak of the previous up wave.

*This mornings action will mean I need to throw out the provisional count on my daily/hourly charts..I'll update those later today.
---

It is difficult to estimate where we'll close the day.

Suffice to say, I remain on the bearish sidelines, since my Monday morning exit. I am somewhat 'relieved' to have escaped this 2 day bear massacre. I do not intend to attempt a re-short this morning..or perhaps for 'some days'.

Those still leaning to the bearish side probably need to give this market a few days to exhaust itself..and then level out..wherever that might be.

Good wishes for Wednesday trading..and indeed..the whole of this year.
--

A few other points of note..
Metals and Oil both higher....although both are still way below their highs, relative to equities.

The Dollar is starting the year weak, and is not too far from the 78s. For the doomer bears, this is a real problem.

Okay..this is a major issue now...

IWM is trading >86 in pre-market..at a new ALL TIME high.

Both the Rus'2000 and the Transports remain key pointers, and if the tranny closes today >5400, then that'll be two indexes suggesting the rest of the market is similarly going to break new post-Sept' highs..aka sp>1474, dow'13600.
--

On any basis..re-shorting the open would seem a crazy move...it'd be nothing less than stepping in front of a freight train*, loaded with gold and silver bullion.

*driven by the Bernanke.
Posted by Trading Sunset at 13:29:00
Email ThisBlogThis!Share to TwitterShare to FacebookShare to Pinterest
Newer Posts Older Posts Home
Subscribe to: Posts (Atom)