Considering the equity market gains, the VIX is holding up very well. No doubt this is partly due to the looming uncertainty of the Wednesday FOMC. The VIX closed -1.1% @ 16.61  Daily VIX trend looks bearish, and a break to the 14s looks very viable by the Friday close. 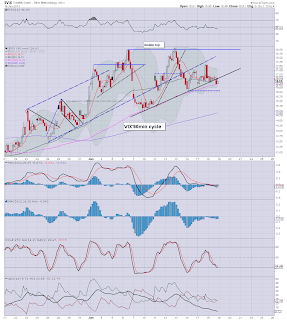 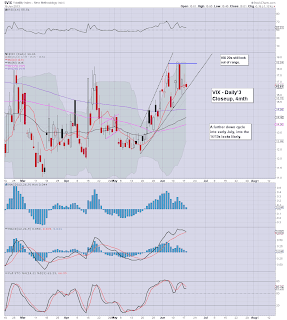 There is very little to say, other than VIX looks set for further weakness for the rest of this month, and probably the first half of July.
--

Equity bears have little to take comfort in from the VIX, aside that the VIX is still within a broadening up trend - see daily chart, although I'd guess that trend will break tomorrow.
--

more later..on those bullish indexes
Posted by Trading Sunset at 23:00:00
Email ThisBlogThis!Share to TwitterShare to FacebookShare to Pinterest

Another day for the bears to forget, with the main indexes climbing almost 1%. The two market leaders - Trans & R2K, closed strongly @ 6358 and 999 respectively. Underlying momentum continues to swing back to the bulls, sp'1670s look very likely within a day or two. 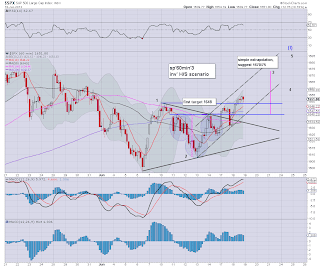 The key 'marginally higher low' of Sp'1608 is now looking a fair way down, and sure doesn't look like it'll be breached any time soon.

*I remain on the sidelines, and sitting it out until after the Fed nonsense is out of the way.
-
Posted by Trading Sunset at 21:01:00
Email ThisBlogThis!Share to TwitterShare to FacebookShare to Pinterest

3pm update - another happy day for the bulls

The market is comfortably holding within the sp'1650s, and is showing relentless increasing strength. Daily charts are warning of massive upside into the1670s by late Wednesday, and there is little reason why the sp'1700s won't be hit within the next 2-3 weeks. 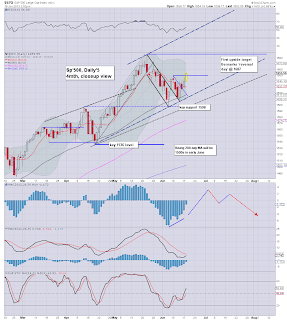 The Fed (and I can't blame them) are likely playing little mind games with the US capital markets.

---
*I remain entirely on the sidelines. Am very much tired of this nonsense, might consider an index-long on Thursday, but hey, by then, we'll be in the sp'1670s..if not higher.
Posted by Trading Sunset at 19:54:00
Email ThisBlogThis!Share to TwitterShare to FacebookShare to Pinterest

Its that time of day again. Time for another random rumour to give the market an excuse to cycle lower for an hour. Market looks vulnerable into the close, not that it will do anything to dent the massive underlying pressure to the upside. Very bullish day...in a bullish week. 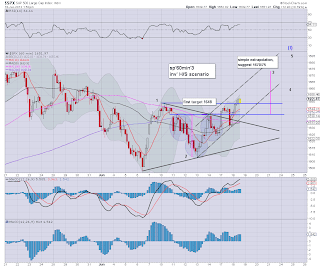 Even a decline to the low 1640s will do nothing.

...and I'm guessing the FOMC will merely give the market a great relief..and excuse to hit the 1670/75 area.

Everything is 100% bullish, and looks set to accelerate across the week. 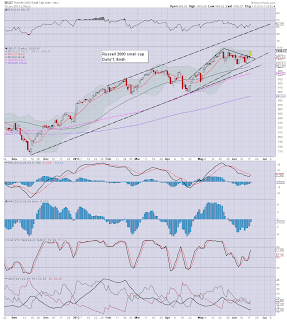 stay tuned
Posted by Trading Sunset at 18:56:00
Email ThisBlogThis!Share to TwitterShare to FacebookShare to Pinterest

Market is holding the low 1650s, not that a daily close is important. What does seem clear is that this market is going significantly higher into July. Those on the short side look as though they are facing an all out assault from the FOMC tomorrow afternoon.

Its not like the QE is going to end any time soon, right? The smaller 15/60min cycles are again looking a bit toppy.

Bulls have a good 10pt downside buffer before breaking the current hourly uptrend.
---

Metals remain weak, but the miners sharply lower, GDX -2.6% or so.
Posted by Trading Sunset at 17:54:00
Email ThisBlogThis!Share to TwitterShare to FacebookShare to Pinterest

The market has broken slightly above the sp'1648 high, and the door is now open to  the inverse H/S target of 1670/75. Metals remain weak, but off their lows. Despite the equity upside, VIX is holding up well, just -0.5% 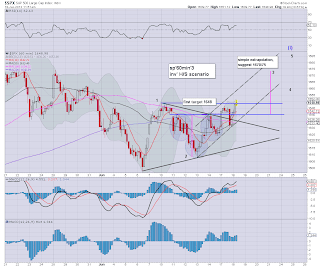 So, we're cruising slowly upward. No doubt this is annoying those who continue to keep re-shorting, despite the daily charts... 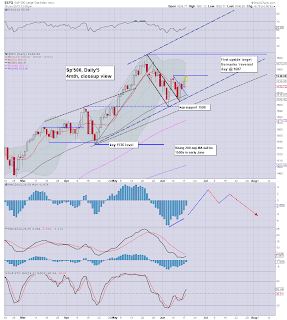 See the MACD cycle, I've added a 'vague guess' for the cycles across July.

Generally, I'll refrain from any short positions until late July, when we might be in the sp'1725/50 area.

Frankly, the daily MACD cycle should terrify the bears right now. its suggestive of huge upside for the rest of this week.

--
*I remain content to be on the sidelines..with no plan to do anything until Thursday.

As ever...bullish on equities...very bearish on the ratty bonds.
Posted by Trading Sunset at 16:58:00
Email ThisBlogThis!Share to TwitterShare to FacebookShare to Pinterest

The equity bears are facing the same nonsense they have faced for the past four years - underlying upside bias. All things being equal, this market just battles higher. A break >1648 looks likely today, and that opens up the 1670/75 inv. H/S target by end Wednesday 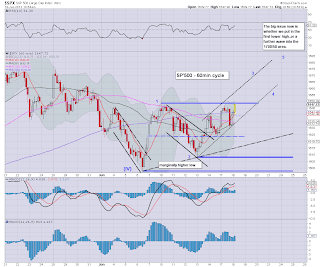 I am real tired of this, at least I'm not short right now.

Minor opening gains for the market, but it appears the bulls are going to struggle to break the key high of 1648 before tomorrows Fed announcement. Metals remain weak, with Gold -$9. Daily index charts continue to warn of significant upside into July 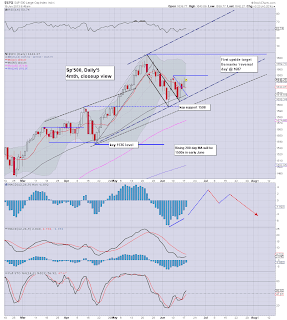 I'm tired, I don't think I'll take any new trades until Thursday. Its been a great 8 weeks since the April low, and I don't want to mess up due to the market reacting the 'wrong way' to the Fed.

Way too much risk of whipsaw tomorrow afternoon.
--

Those equity bears still seeking a break <1608.....eyes on the VIX, which remains somewhat resilient.

Bears...poweruless. Yesterday afternoons down candle looks an embaressing anomaly..
Posted by Trading Sunset at 14:50:00
Email ThisBlogThis!Share to TwitterShare to FacebookShare to Pinterest

Good morning. Futures are moderately higher, sp +4pts, we're set to open @ 1643. Metals are weak, whilst Oil is a touch higher.  The FOMC meeting begins today, and market is no doubt going to be a bit twitchy for the next few days. 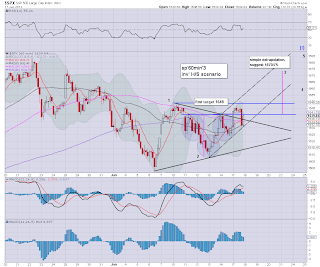 A few pieces of econ-data due..so we could still open red, but smaller cycles offering significant upside. Certainly we could break 1648 this morning, and that opens up the primary target zone of 1670/75.
-

I am on the sidelines, which seems a good place right now.
Posted by Trading Sunset at 13:30:00
Email ThisBlogThis!Share to TwitterShare to FacebookShare to Pinterest

Despite a rather sharp down move in the afternoon of 1%, the sp' closed the day comfortably higher +0.76% @ 1639. Daily and weekly charts remain pretty bullish, and a move into the sp'1700s looks on schedule by mid/late July. 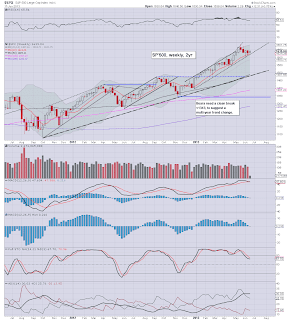 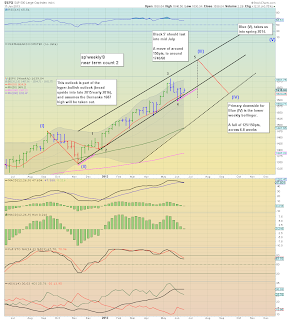 Todays' closing 30 minutes typify the market we exist in. Despite a little FT news posting that suggested the Fed might 'soon' be tapering QE, the market rallied from sp'1630 to 1639.

Weekly charts are moderately bullish, and if the count is right, then we're set to hit the 1700/50 area by late July. Ironically, my 'best bear' downside case for late Aug/early Sept' is only sp'1600 - where we were just 8 days ago!

Indeed, if QE largely continues (as I expect), then baring some major upset (EU, Merkel kicked?), the market looks set to climb into spring 2014...at which point we'll be challenging the big sp'2000 level. Yeah...2000, great huh?

There is minor housing data in the morning. Market will now no doubt be largely focused on the FOMC meeting, with the announcement due Wed' 2pm.

*I will merely look to go long the indexes (again!) early Tuesday, especially if we have a minor down cycle, although the 1620s no longer look viable - based on the closing hour price action.

The main indexes opened higher, and built gains into the early afternoon. The FT posting upset the market for 90 minutes, but the market managed a strong closing half hour. Transports was the weakest index, slipping 0.2%, and remains in the somewhat bearish 6200s. 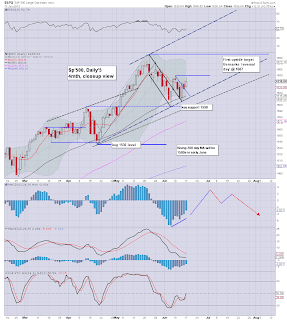 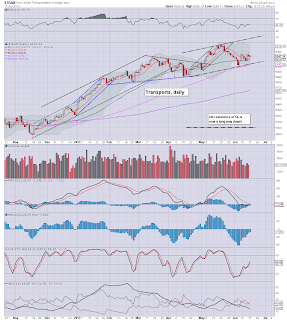 So...a day generally for the bulls, although the afternoon price action certainly wasn't so great. It was certainly a bit of a mess, but the bulls still managed to ramp from 1630 to 1639 in the closing 30 minutes, which was very impressive considering the hourly charts were rolling over.

Daily MACD (blue bar histogram) cycle ticked higher for the third day, and is set to go positive cycle in about 3 days time.

Thursday looks VERY bullish, sp' looks set to be trading in the 1670s.