Bulls fight back into the weekend

Bulls saw what they needed today. I'll keep this brief, I'm tired, and I will post indepth over the weekend. 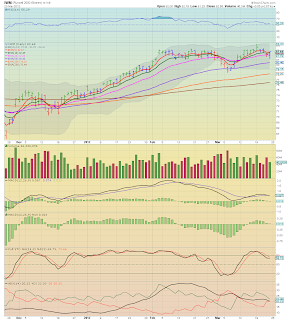 We end the week for IWM with a bullish engulfing candle. All things considered, its the best that could have been hoped for. Other indexes are not as bullish, but I'll cover that over the weekend.

In the meantime, welcome to the weekend!
Posted by Trading Sunset at 20:53:00
Email ThisBlogThis!Share to TwitterShare to FacebookShare to Pinterest

Friday crawling back up 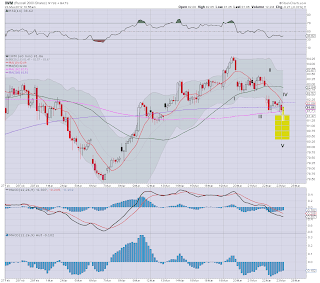 Not expecting any major upside today. In fact we could trundle around for as much as a week, but so long as IWM holds over 80 -at ALL times, I'm confident that sp'1440 will yet be hit.

More later.
Posted by Trading Sunset at 15:00:00
Email ThisBlogThis!Share to TwitterShare to FacebookShare to Pinterest

The Euro is looking like its ready to break lower. 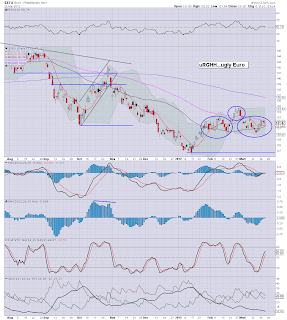 Momentum indicators are still pointing upward, but we do arguably have a pretty clear H/S formation. A move above 1.34 would likely mean we continue upward. We'll know soon enough. 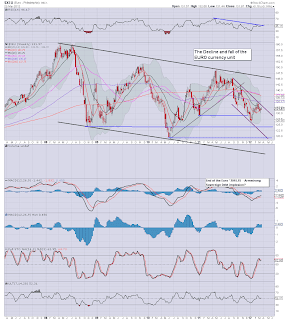 A move to test/break 1.20 looks very possible later this summer. Of course, that would mean the $ is up, which would mean downward pressure on equities (and especially the metals!). Hmmm.

Conversely, a move above the bigger channel line of 1.35 would suggest a real chance - no matter how insane it seems, to around 1.40/1.45 later in the summer. That would support the notion of Sp'1550 - as many have been touting lately.

So, keep an eye on the Euro in the coming days, it could offer a real clue as to where this crazy market is headed.
Posted by Trading Sunset at 13:00:00
Email ThisBlogThis!Share to TwitterShare to FacebookShare to Pinterest

A brief look at two of the main weekly charts I closely follow....

IWM weekly - near the edge 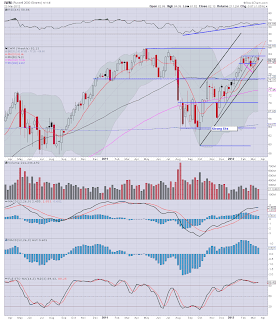 IWM's bull flag/pennant is in real danger. A weekly close under 80 would arguably cancel out the flag, and suggest a mid-term top is in. So, the doomer bears need to look for 79s..or lower this Friday/early next week.

Again, its interesting to note that the Rus'2000 small cap never did break the May 2011 high, and thus the 'October-March wave was a 2' theory is still intact for this index...just. Although I'd argue the fact that the nasdaq, dow, and SP' - (all posting new highs) over-ride this lagging R2K index. 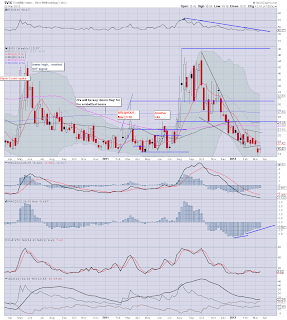 Last weeks fall which broke a 6 week flooring pattern is still causing a problem for the VIX. However, the underlying momentum is still recovering, and is set to go positive cycle in about 3-5 weeks - which will be near the end of April. Another case of 'sell in May. and go away'?

We're at an important time. The ramp since the October low - in both US and world indexes, has been pretty extreme. We've seen the vix decline from 49 to briefly hit 13s. Of course the VIX can remain floored and trundle around in a narrow 3-5pt range for many months - as previous cycles often display.

For the moment at least, we have no real sell signals in the indexes, but we sure aren't looking as secure as we were just a few days ago. I'm still guessing (and trading it that way) we make a further move up into next week, and early April, with targets of IWM 86/87 and SP'1440.