All the main US equity indexes are holding within their grand up trends from the spring 2009 low, yet there is distinct weakness in the R2K/Nasdaq. A major multi-month decline remains very viable this summer, with a natural back test of the 2000/2007 top in the sp'1625/1575 zone. 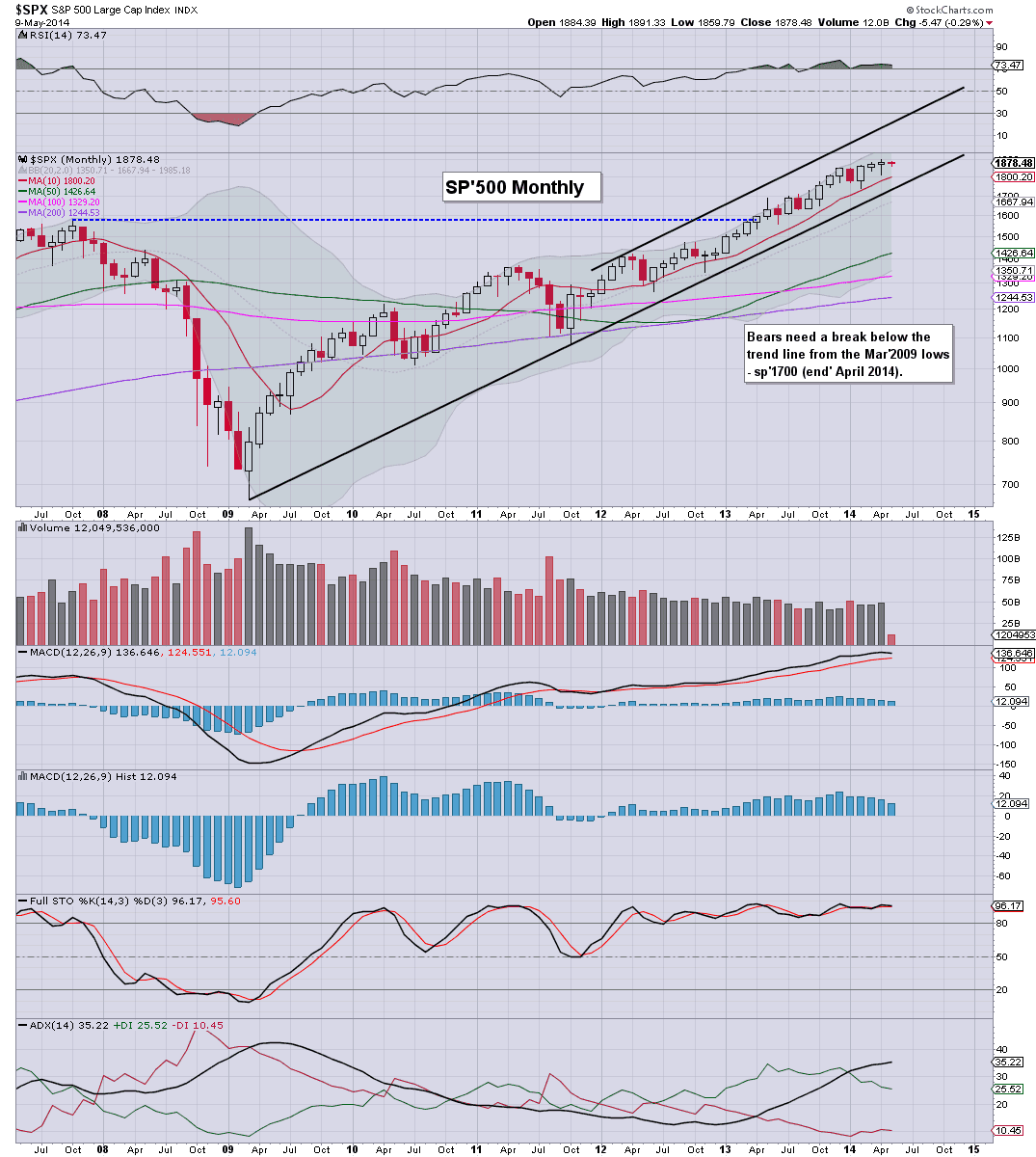 The sp' is a touch lower so far this month, but the broader up trend is unquestionably still comfortably holding. There is VERY strong support at the rising 10MA...currently at the big psy' level of 1800.

For the equity bull maniacs, the upper monthly bollinger is currently offering the 1980s, and in June, that will climb into the 2000s, although few appear to be expecting sp'2000 this side of the summer.

Underlying MACD (blue bar histogram) is ticking lower for the fifth month, and at the current rate, will turn negative cycle in June or July. Certainly, for those with sights on a big multi-month down wave, the early signs ARE there. 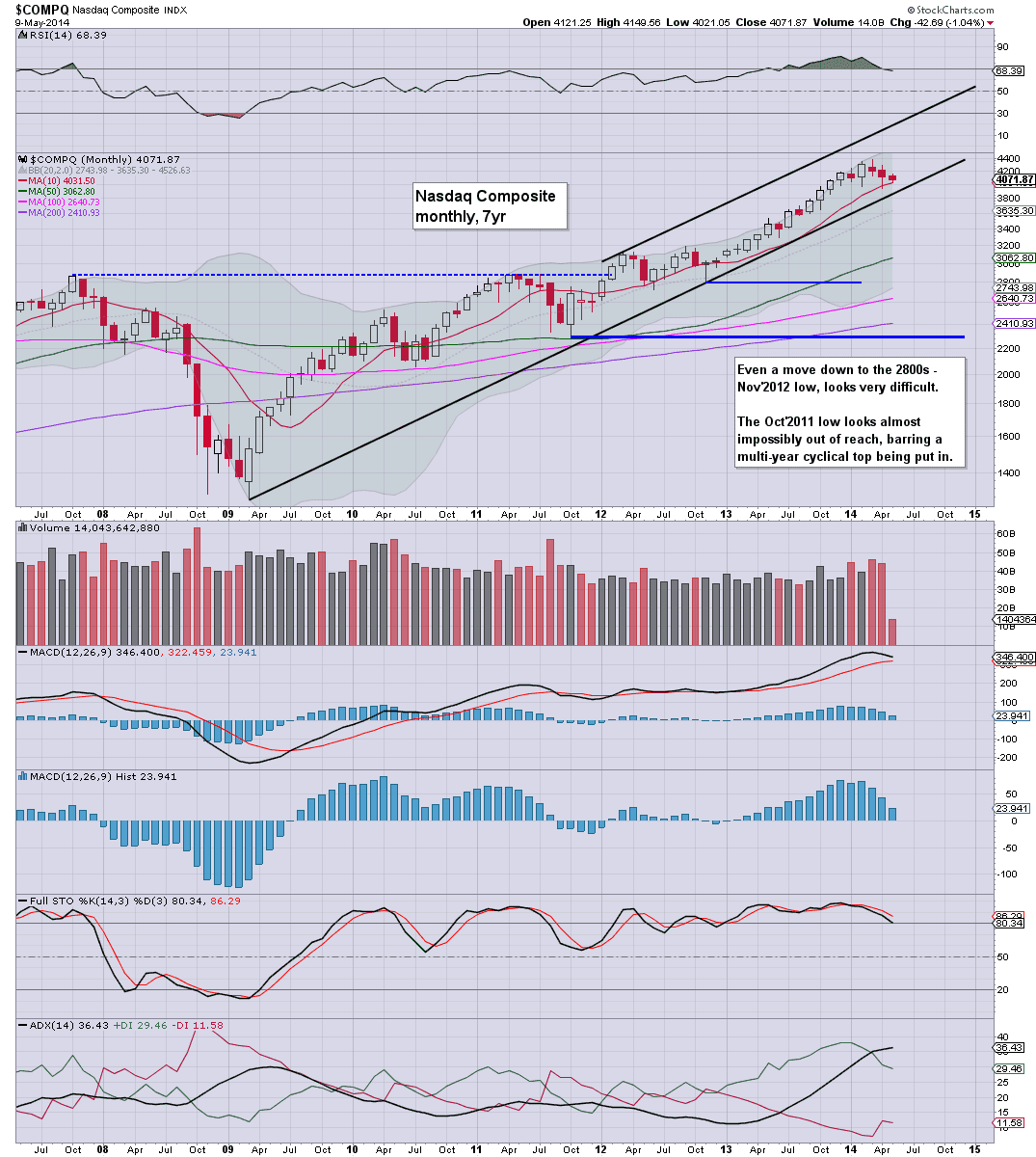 The Nasdaq is currently showing the third consecutive monthly decline, something we've not seen since Sept'2011. Of course, we could still close net higher this month, and indeed, that is currently my near term outlook. 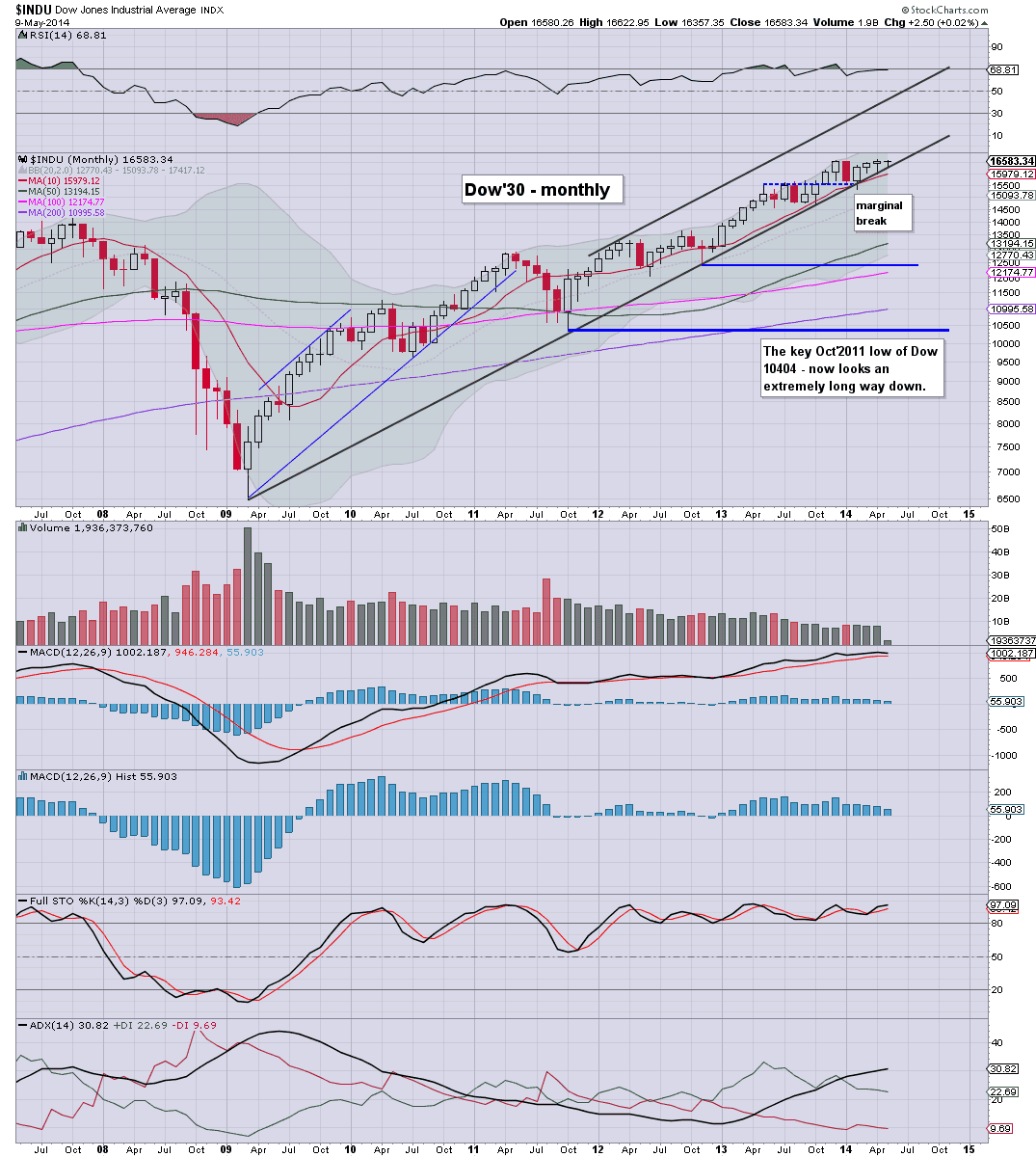 The mighty Dow is a clear 1000pts above what used to be stiff resistance in the 15500s. The weekly cycle is offering the 16700/800s by late May. Yet the monthly is offering the 17300/500 zone in June. I suppose the latter is viable..before this market does finally implode.

Underlying MACD cycle for the Dow is the weakest of the main indexes, and is set to go negative cycle in June or early July. Primary downside target for the summer is 14000/13500. I do not expect to see the 12000s under any scenario. 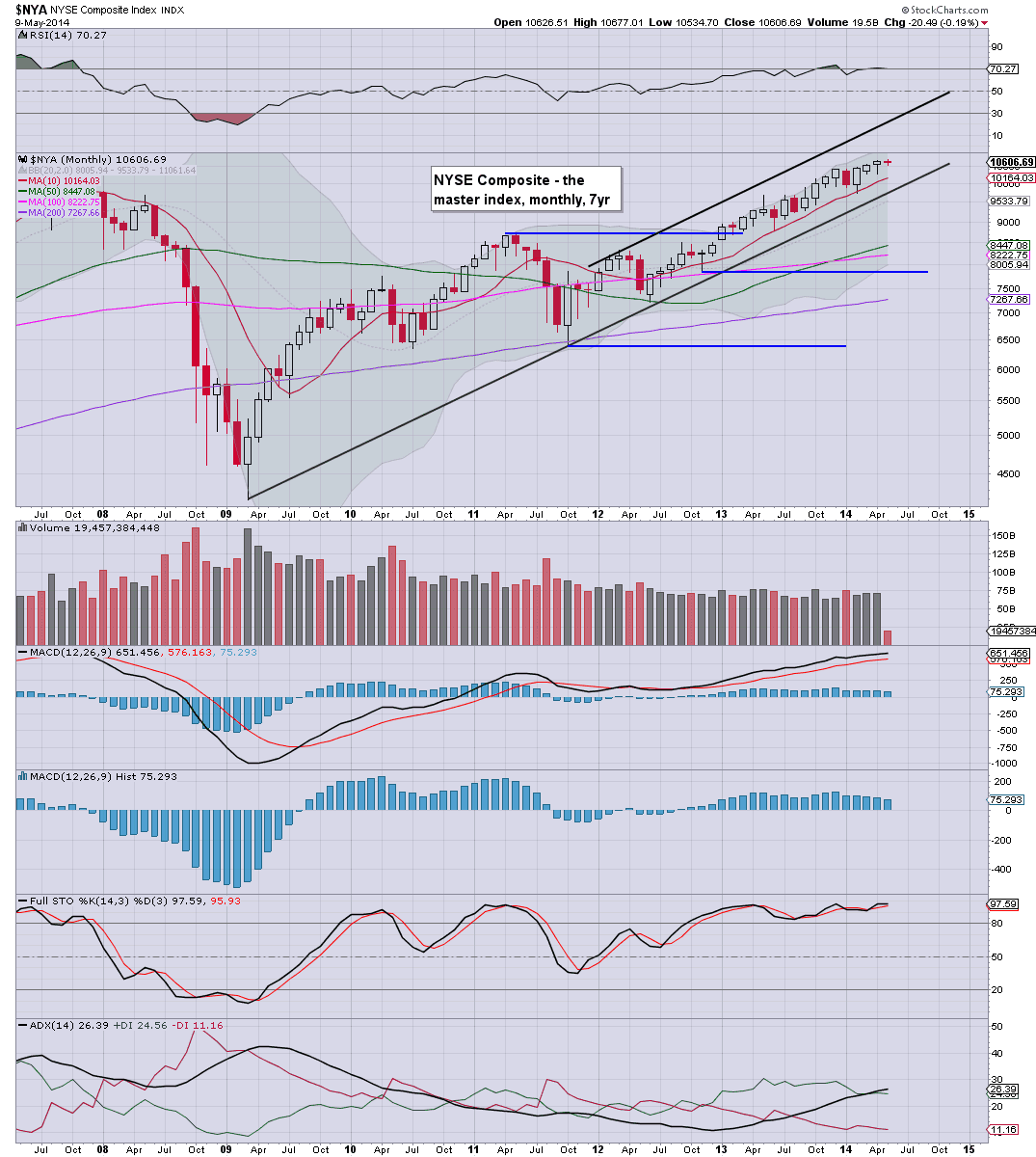 The master index remains broadly bullish, with near term viable upside to the 10750/11000 zone. However, - like the Dow, underlying MACD cycle is ticking lower, and is set to turn negative this summer. Best case downside looks to be around 8500 by late summer/early Autumn, before the next grand wave higher into late 2015/early 2016. 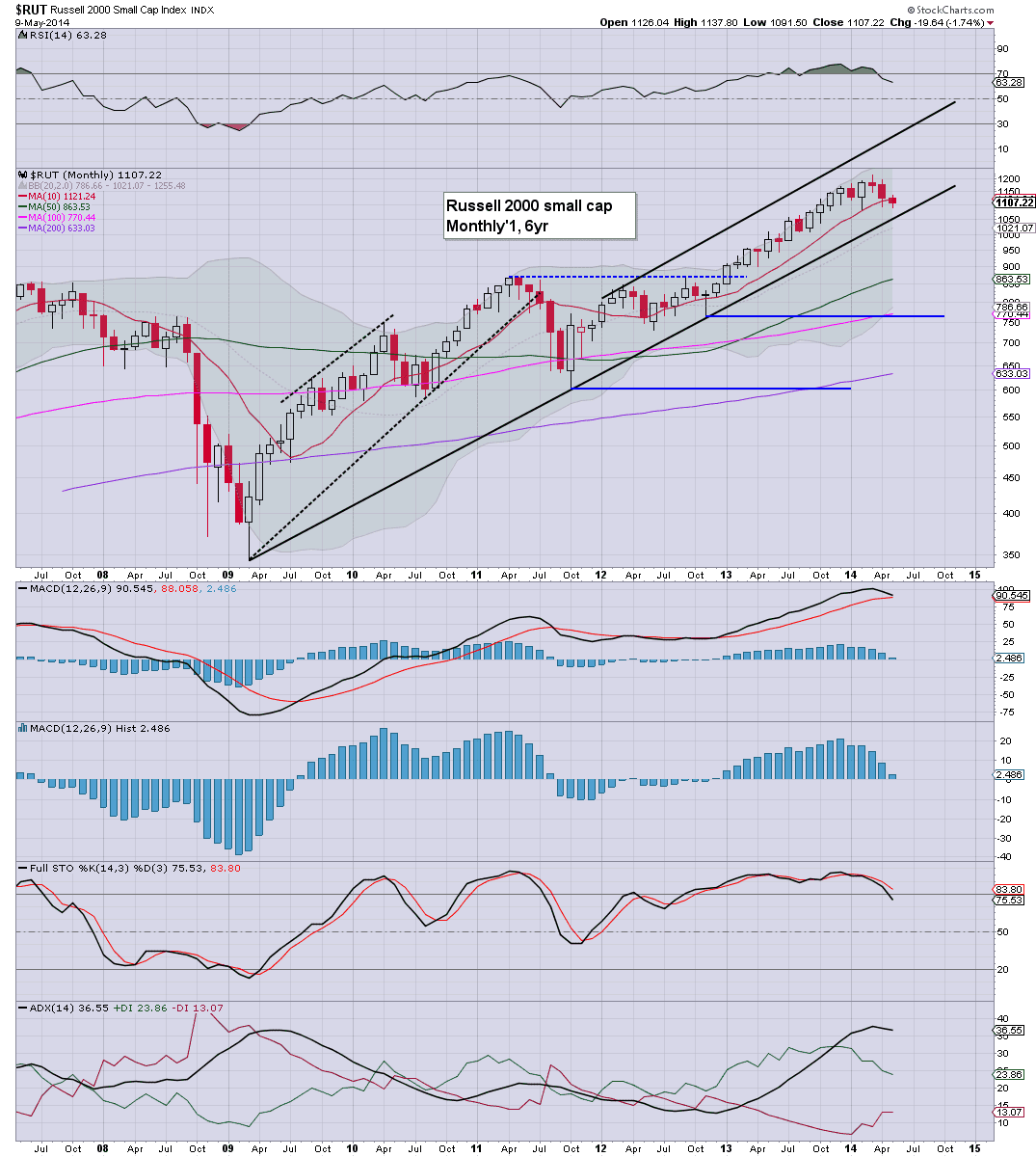 Like the Nasdaq, the R2K is lower for the third consecutive month, and is currently trading under the important 10MA. However, a near term 'moderate' bounce is expected, back to the 1160/80 zone, before renewed..and far more powerful downside this summer. Best case for the equity bears looks to be the 950/900 zone, but that will be tough to achieve. 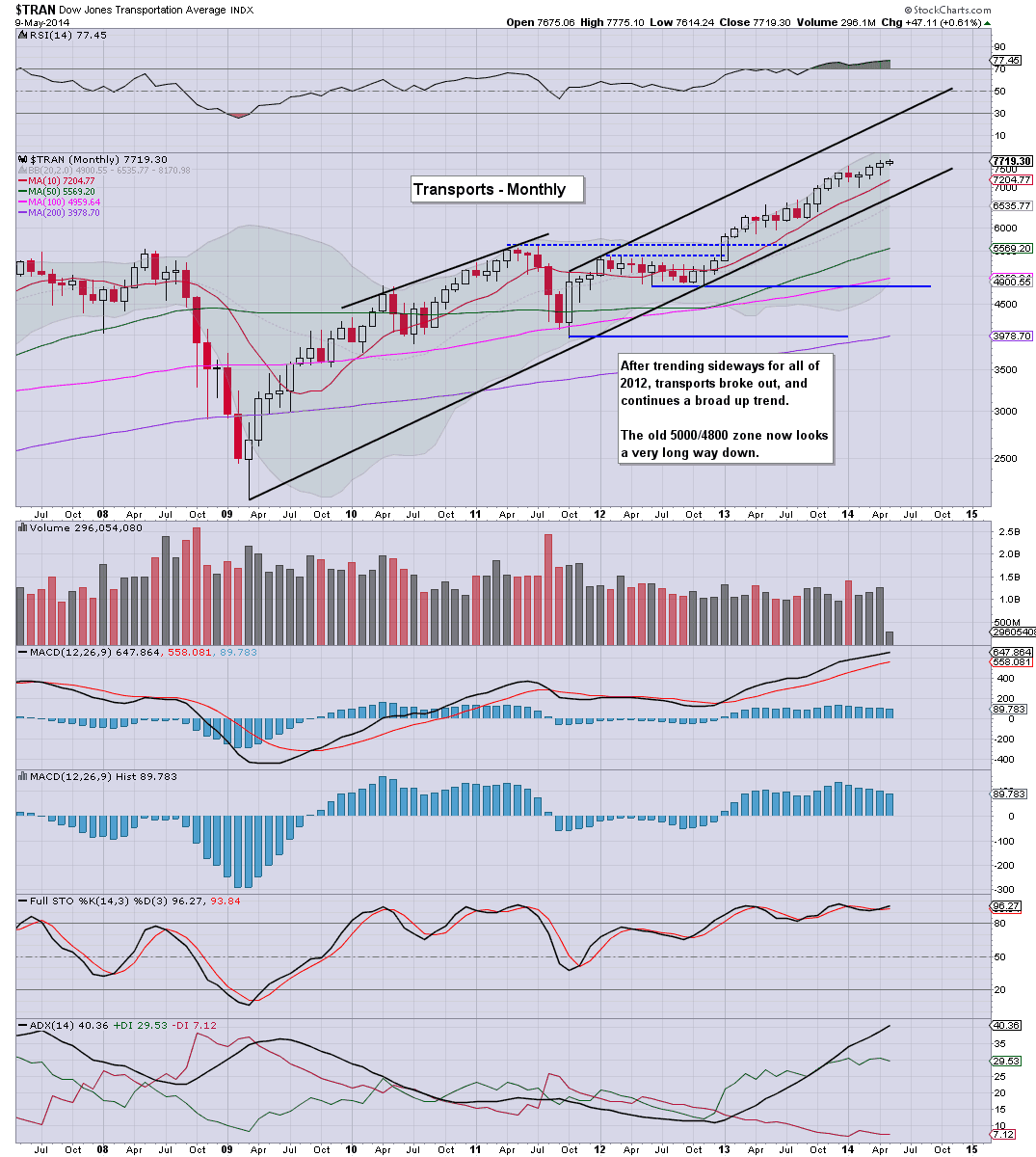 The 'old leader' is looking as strong as ever, with a new historic high of 7775 achieved this past week. There looks to be near term upside to the 7800/8000 zone, before even the market leader finally breaks lower. Underlying MACD cycle will take a good 2-3 months to turn negative cycle, once a peak in prices occurs.

As most now recognise, we have a split market. The Dow/SP/Trans/NYSE Comp', are all continuing to push higher, whilst the R2K/Nasdaq Comp' are continuing to slip lower. Certainly, I would call this weakness in the R2K/Nasdaq, an early warning of trouble for the broader market this summer.

There is a possibility, although I'd put it at <10%, that this will drag out until the early Autumn. Considering the R2K/Nasdaq, I'd guess the rest of the market will follow, given another month or two.

The first aspect of note next week is Retail sales, on Tuesday.

Thursday has an array of data, CPI, jobless claims, empire state, indust' prod, phil' fed. Yellen is also due to speak early in the morning, but it is difficult to say if the media will pay it any attention. The week concludes with housing starts and consumer sentiment.

My best guess is that the market will break into the sp'1900s this month, and probably get stuck around 1920 by late May/early June. The 1940/60 zone - an area where a fair few chartists are seeking, would be best bullish case, but I find it difficult to envision..unless you believe the R2K/Nasdaq are going to break new highs.

I am holding long across the weekend, via CHK, DO, SDRL, and STX, I will be looking to remain broadly long for another few weeks, but the higher we go...I will lighten up on positions/size. By late May/early June, I will be seeking to go heavy short the indexes, and long VIX.

Another wave higher.. still looks due 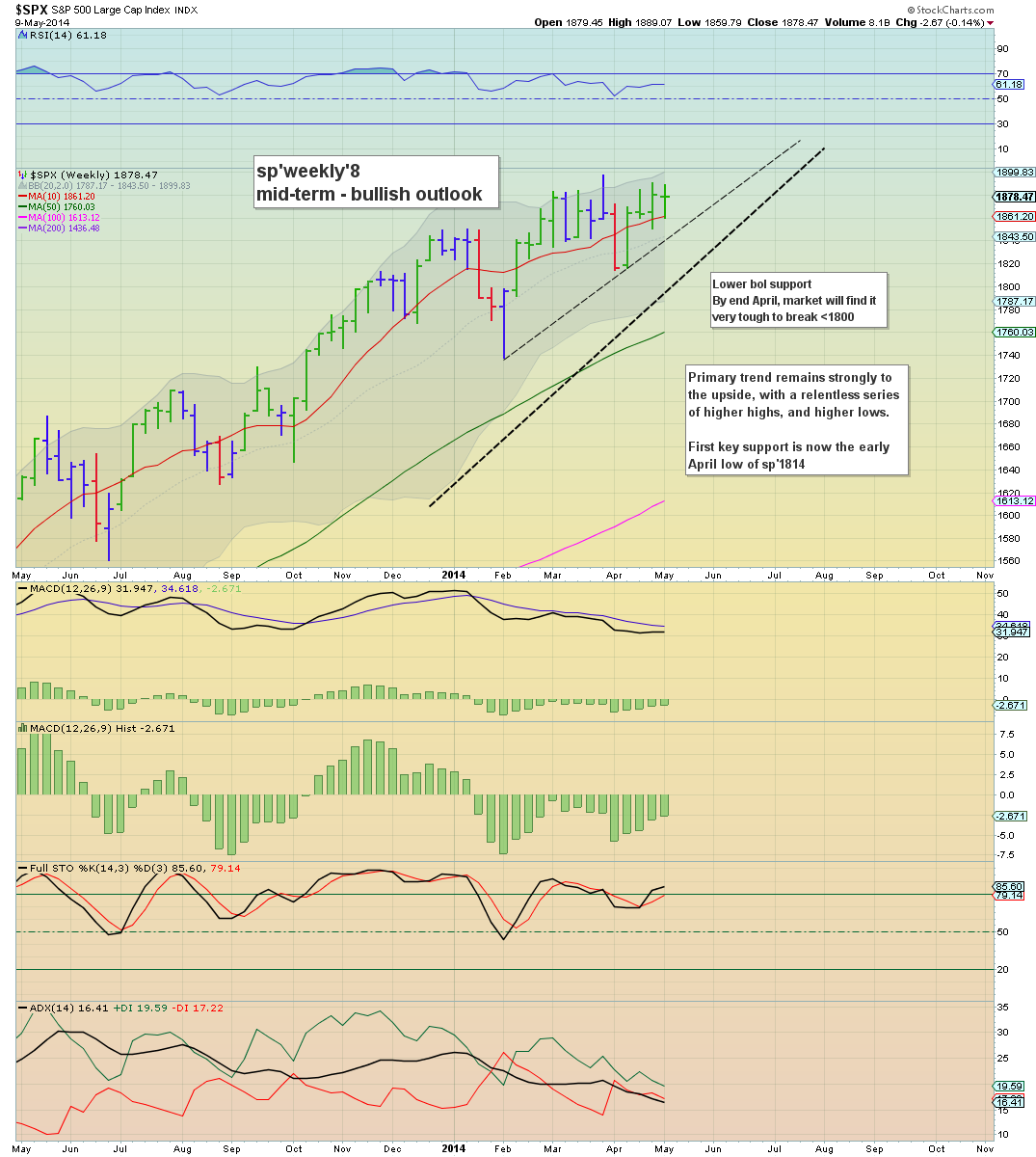 Well, another week comes to a close, and the US markets are indeed still broadly climbing.

Yes, the R2K/Nasdaq remain weak, but taken as a whole, the equity bears simply can't get overly confident yet of the much touted (not least by yours truly)...'significant multi-month inter'4 wave lower'.

US equities ended the week with moderate gains, sp +2pts @ 1878. The two leaders - Trans/R2K, settled higher by 0.2% and 0.9% respectively. Near term outlook remains moderately bullish, into the low sp'1900s within the next week or two. 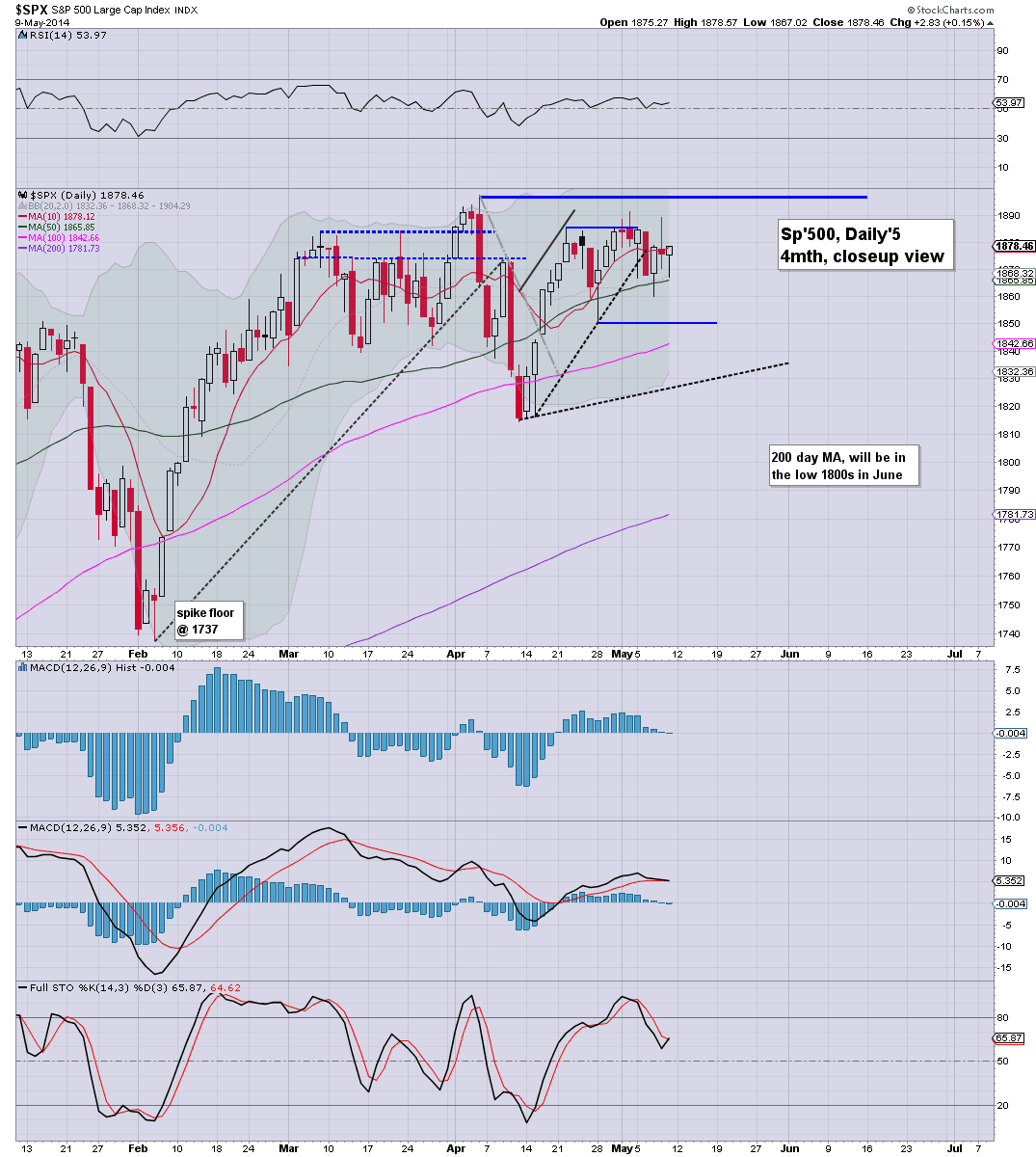 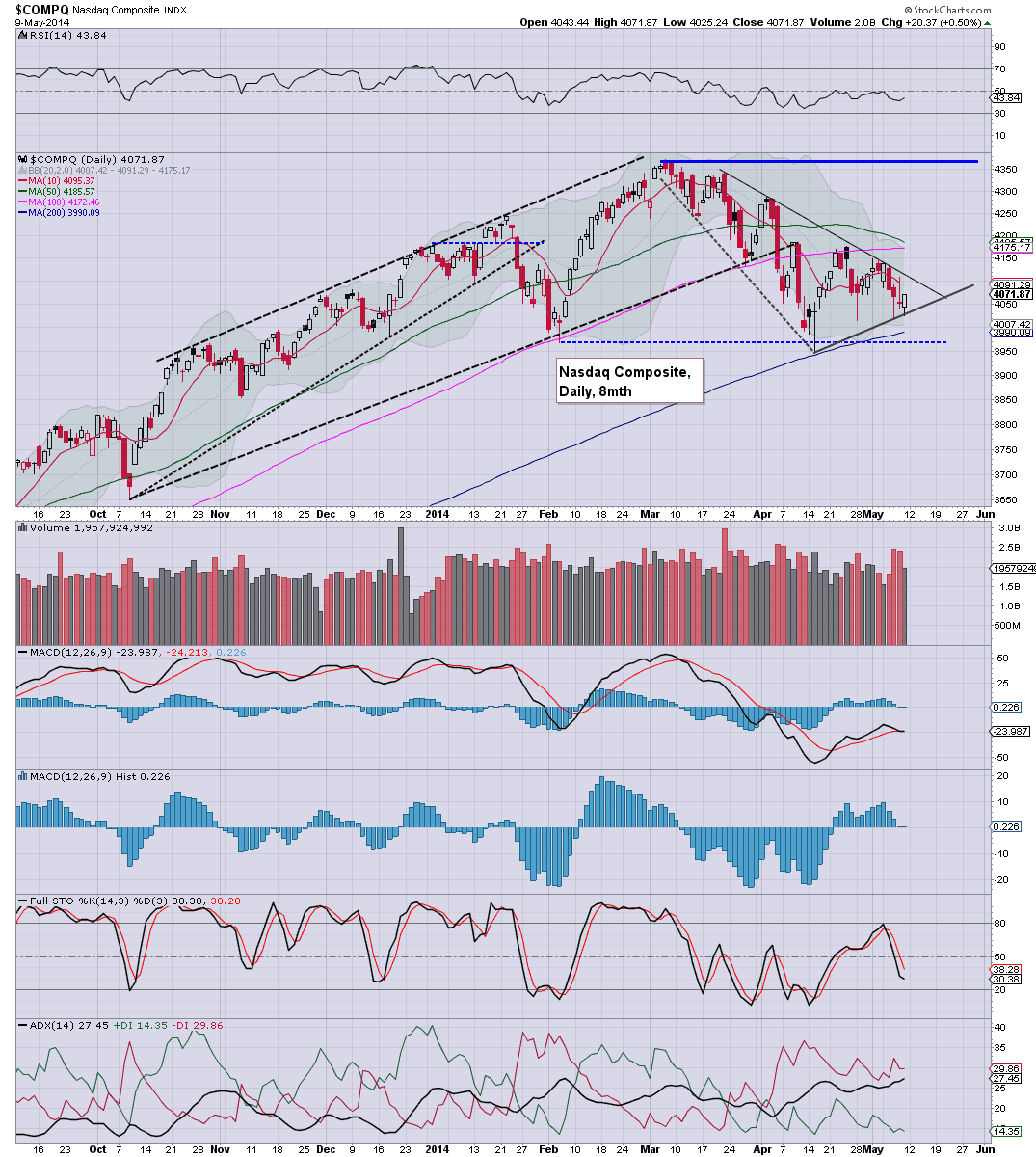 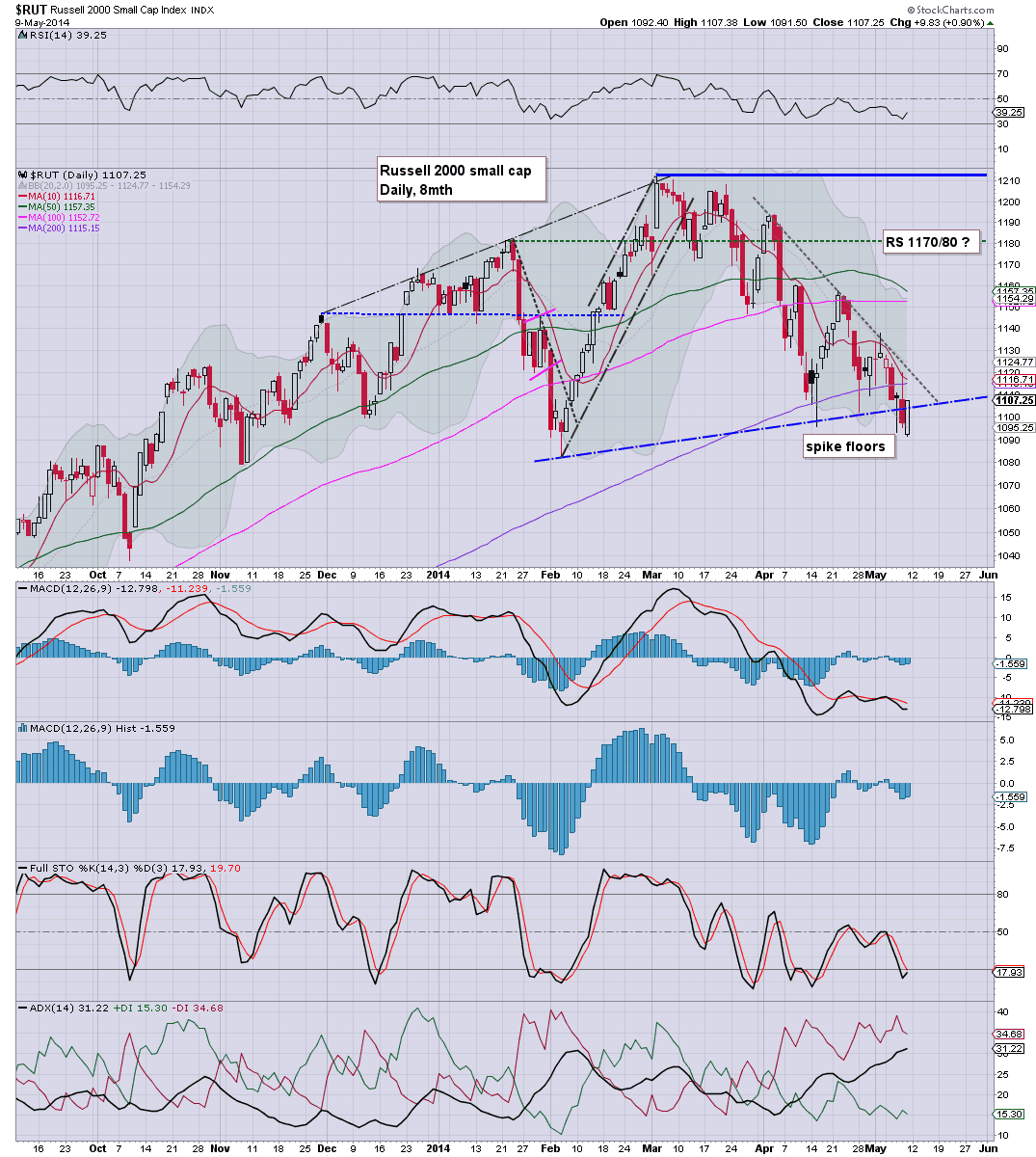 The two battered indexes - Nasdaq/R2K, have battled hard to put in key cyclical floors. A bounce of at least 3-4%..maybe 5-6%, seems viable across the next few weeks.

The broader Dow/SP/Trans look set to break new historic highs next week, and again, I'll note, the Trans did break a new high this week, and that certainly is something for the equity bears to seriously ponder over.
-