VIX soars into the weekend 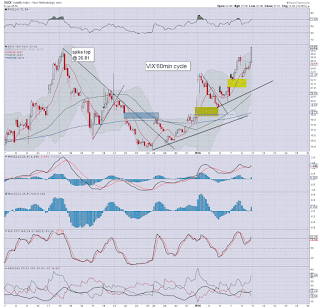 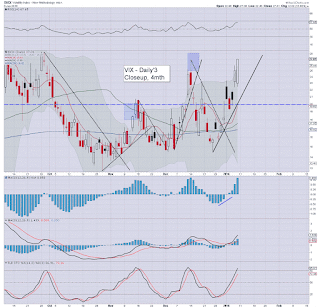 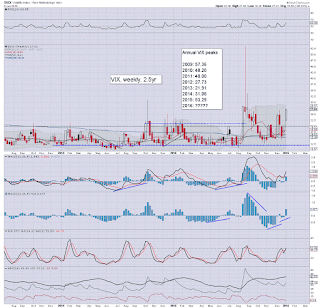 Suffice to add... the second consecutive net weekly gain for the VIX, with the highest close since late September.

VIX 40/50s are unlikely in the current down wave, but they do look due in the months ahead, as the sp' looks headed for the 1600s. 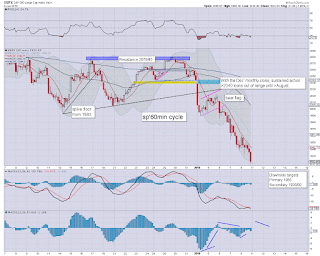 *closing hour action: TRAINWRECK, an absolute classic instance of the 'rats selling into the weekend'.
--

One hell of a week... confirming what we saw for the December/yearly close.

The market is headed broadly lower in the weeks and months ahead.. probably to the sp'1600s or so.

Have a good weekend everyone
==

**I hold short, via TVIX-long, across the weekend
--

*the usual bits and pieces across the evening to wrap up the week
Posted by Trading Sunset at 21:01:00
Email ThisBlogThis!Share to TwitterShare to FacebookShare to Pinterest

US equities are seeing renewed weakness, and we're likely to see a classic instance of 'rats selling into the weekend', as there is high threat of a significant gap lower next Monday. Regardless of the exact close, it has been a powerful week for the equity bears, with a net weekly decline of around -5.0%. 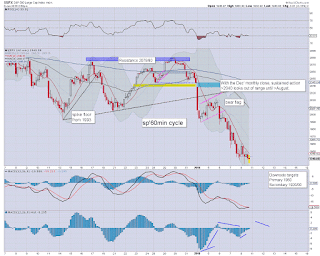 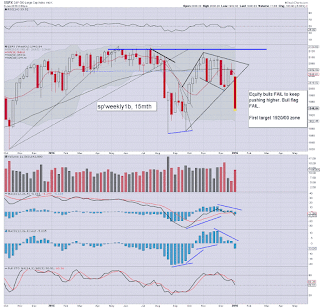 Suffice to say... its been one hell of a busy week.

The last two days of December were rather definitive - as I noted last weekend.

We've now seen FULL clarification of where we're headed in the weeks.. and months ahead.

The default trade is clearly to the short side. I realise some will try to trade the rallies, but to me, that seems overly risky and frankly... difficult.
--

updates into the close... if price action gets interesting...

So.. err.. where is Gartman on a Friday afternoon?

What a great end to the week

This is exactly the style of price action that is necessary for a chance at a giant Monday gap down.

We should know around 3.55pm.. if there is a realistic chance.

The window IS open.

US equities remain in minor chop mode, with the sp' trading around 1940, along with VIX 24/23s. Considering the failure of the pre-market gains, and the declines this week, renewed weakness into the close looks probable. Metals are broadly weak, Gold -$10, with Silver -2.5%. Oil is -0.7% in the $33s. 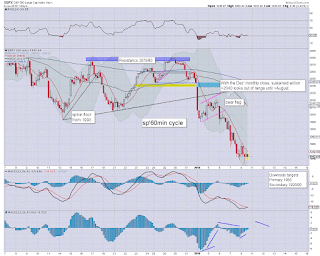 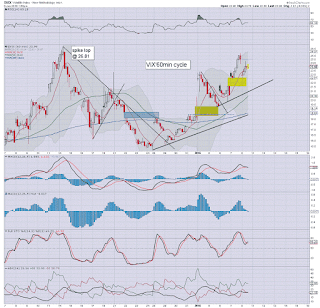 A lot of chop, and considering the good jobs data, the market is simply unable to muster any sustained buying at these levels.

We're still on track for the 1920/00 zone, but that clearly looks out of range until next Monday.

Indeed, consensus is for a turn early next week.. with first chance of sustained upside.
--


2.28pm.. the market is seeing renewed weakness again. A break <1930 looks very viable... and that'll give a fair few of the cheerleaders on mainstream TV a good scare.

After all, the jobs data was okay.. how could the market be falling still ?

A case of 'rats selling into the weekend' looks underway.
Posted by Trading Sunset at 18:51:00
Email ThisBlogThis!Share to TwitterShare to FacebookShare to Pinterest 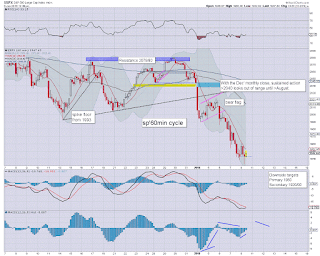 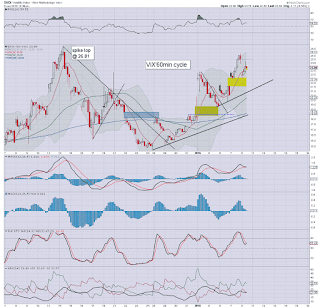 As things are, a break <1900 looks increasingly out of range in the current cycle.

Sustained action >2000 looks unlikely. On no realistic scenario does a break back above 2040 look possible until the late summer.

*yes, I'm still long TVIX, will hold across weekend, and look to drop next Mon/Tuesday, preferably with VIX 28/30.

--
back at 2pm
Posted by Trading Sunset at 17:51:00
Email ThisBlogThis!Share to TwitterShare to FacebookShare to Pinterest

The equity gains were clearly shaky from the open, and we have already seen indexes turn negative, with a new cycle low of sp'1932. VIX is battling to turn positive, currently in the low 24s. Metals are weak, Gold -$5. Oil is struggling, -0.9% around the $33.00 threshold. 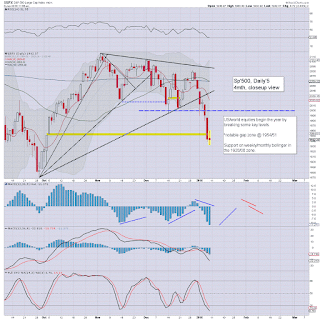 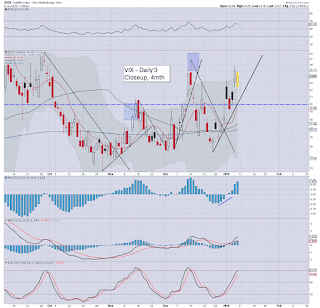 *I'm trying not to get lost in the minor noise, as the bigger daily, weekly, and monthly cycles are absolutely clear of where we are headed into the spring/early summer.

Price action is similarly clear... rallies ARE being sold into.
-

Not much else to add. The closing hour will be rather important... and regardless of the exact close, we're still set for net weekly declines of around -5%.. which is a massive achievement for the equity bears to begin the year.

--
time for lunch :)
Posted by Trading Sunset at 16:57:00
Email ThisBlogThis!Share to TwitterShare to FacebookShare to Pinterest

11am update - bearish sunshine to end the week

US equities are clearly struggling, as the underlying weakness - that began from Tue' Dec'29th (sp'2081) remains. The bigger weekly/monthly cycles are quite clear, we're headed broadly lower. VIX is battling upward from an opening low of 22.48. Oil is back on the slide, -0.6% in the low $33s. 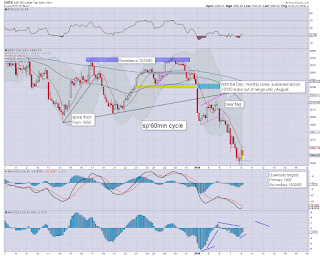 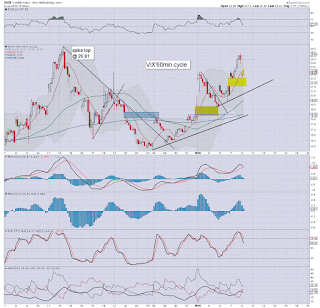 *note the opening VIX candle.. of the red reversal doji type, at the top of yesterdays price gap.

So.. we were higher by almost 30pts in pre-market to around 1975... but we're now almost flat... and the threat of renewed weakness into the weekend is very high.

It should be clear, rallies ARE being sold into.

A weekly close <1920 would make things real interesting.
Posted by Trading Sunset at 15:51:00
Email ThisBlogThis!Share to TwitterShare to FacebookShare to Pinterest

US equities open higher, but any sustained action >sp'1975 looks overly difficult. The Thurs' low of 1938 makes little sense as a key low, renewed weakness to the 1920/00 zone still looks probable. What really matters (for the Monday open) is the style of price action in the closing hour. 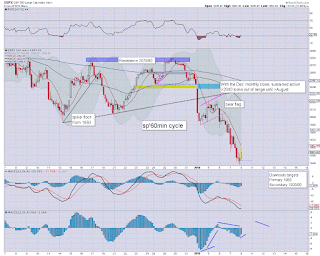 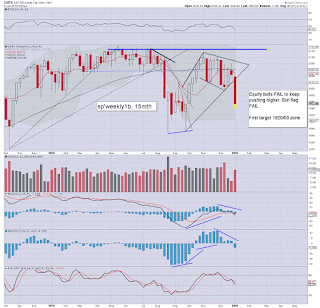 *anyone getting overly bullish needs to go stare at the weekly/monthly charts for a good few hours.

There is nothing to be bullish about.. with the bulls having failed to break a new high, having seen a complete fail of what was a bull flag.
-

So... we're higher, but the gains sure look shaky, and highly vulnerable into the weekly close. Long day ahead.... and most should recognise this is one of many rallies that merit shorting.
-

time for some sun... back at 11am.
Posted by Trading Sunset at 14:50:00
Email ThisBlogThis!Share to TwitterShare to FacebookShare to Pinterest 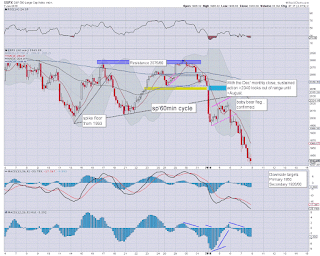 So... overnight gains, and no doubt some equity bears are a little spooked. Broadly though, we're set for severe net weekly declines.

I hold to the issue in that the style in which we close today should give clarity on whether Monday is down big.

By 3.55pm we should know if the Monday open will be a bearish one.

The issue remains... in what manner do we close... for the setup on Monday.
Posted by Trading Sunset at 12:42:00
Email ThisBlogThis!Share to TwitterShare to FacebookShare to Pinterest

It was just another day for the US equity market, with the third big daily decline of four days. The sp'1920/00 zone looks a rather easy target. However, the 1700s are a viable target for next Monday, if the Friday close is at/near the low of the day. 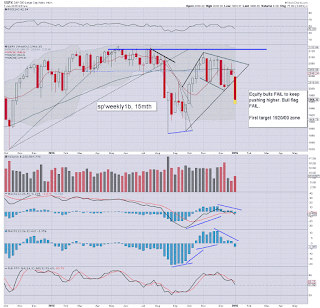 So, we're net lower on the week/year by a full 100pts (4.9%).. and there is currently ZERO sign of a floor. Indeed, from a weekly cycle perspective, a hit of the lower bollinger - currently @ 1903, would be a valid target for Friday/Monday.

Any Friday close near the lower bol' will open the door to a fierce capitulation next Monday.
--

*There are a fair few fib' retraces/extrapolations on the following chart. I suggest you save it, and then view for better clarity. 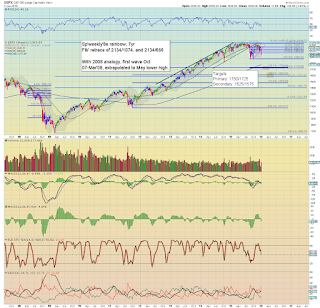 If you accept the bear flag from Aug-Dec'... then a 1.6x fib' extrapolation offers the low 1700s as a basic target.

Whether the US/world markets are in the early phase of a 2008/09 collapse wave... impossible to say. I'd need to see a monthly close <1500 to have any serious consideration of that.

Friday will see the monthly jobs data. Market is expecting 200k net gains, with a static jobless rate of 5.0%. Frankly, relative to the recent ADP jobs number, 200k should be exceeded. The issue is whether the market will see it as good news... or will dismiss it, in face of other  concerns.

*fed officials Williams and Lacker will be speaking
--

Regardless of the exact Friday close, it has been a wild week. The mainstream has already become a little twitchy, with talk of no more rate hikes, and even some murmuring of QE4.

What should be clear now... there can be high confidence in a mid term top, with much lower levels due in the days, weeks, and months ahead.

As I noted at the weekend, the default trade is now to the short side... and other than a monthly close back above the monthly 10MA (currently, sp'2040s).. nothing will have me change that view.

US equities closed significantly lower for the third trading day of four this year, sp -47pts @ 1943. The two leaders - Trans/R2K, settled -3.1% and -2.7% respectively. Near term outlook is for continued weakness to the sp'1920/00 zone. If the Friday close is at/near the lows.. Monday will likely see a mini-crash capitulation in the 1700s. 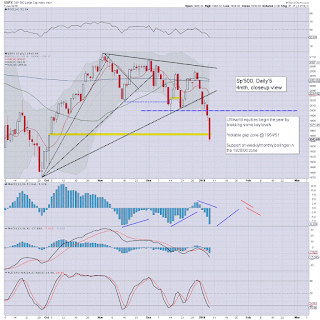 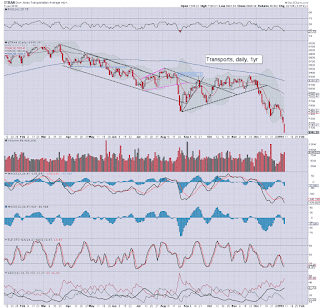 Any price action <1900 would be extremely suggestive of a brief mini-crash move to the mid 1700s.