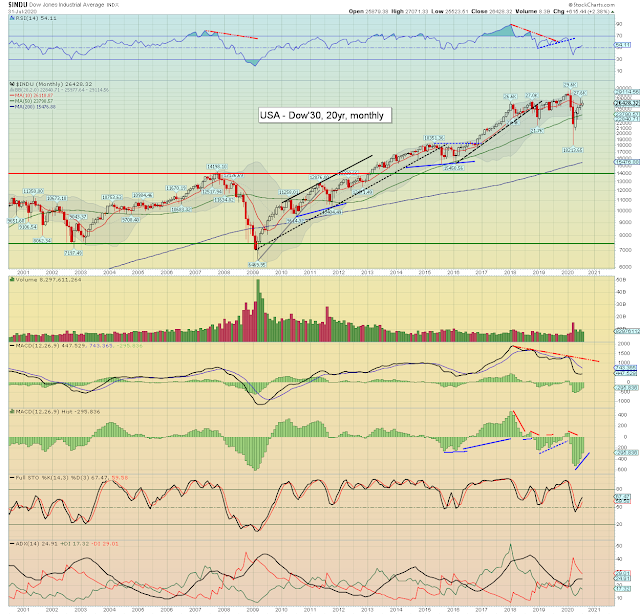 The mighty Dow climbed for a fourth consecutive month, settling +615pts (2.4%) to 26428. The July high of 27071 was notably below the June intra high. The July settlement was above the 10MA, bringing the m/t trend back to outright bullish. Momentum ticked upward, but remains negative, and at the current rate, will turn positive just before year end. Next resistance is the Feb'2020 historic high of 29568, but that looks out of range, before a multi-week cooling wave. 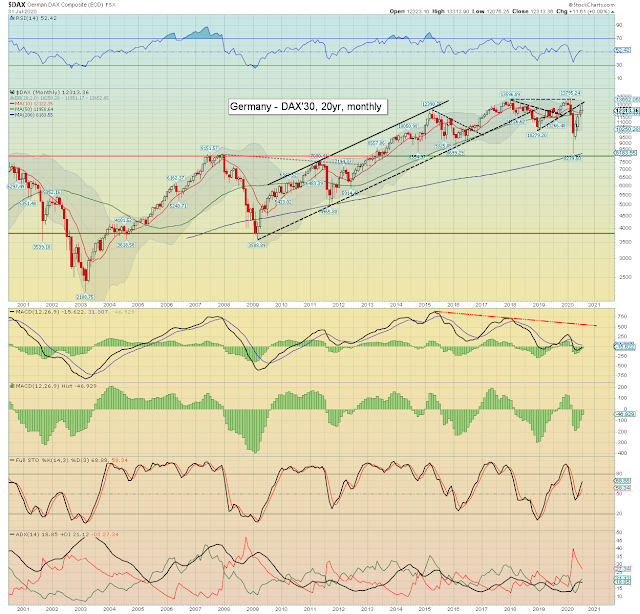 German equities struggled, the DAX settling +11pts (0.1%) to 12313, although that did make for a second monthly settlement above the 10MA. The June and July candles are rather spiky on the upper side, and indicative of s/t bullish exhaustion. Momentum will be prone to turning positive in August. 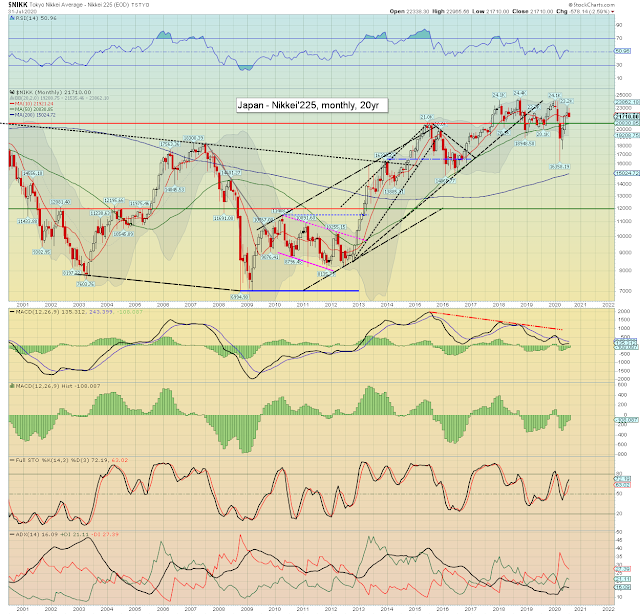 Japan was the laggard this month, settling -578pts (2.6%) to 21710, notably back under the 10MA. The June and July candles were both spiky on the upper side, indicative of s/t bullish exhaustion. The s/t outlook is bearish, with first support at key price threshold of the 21000s. 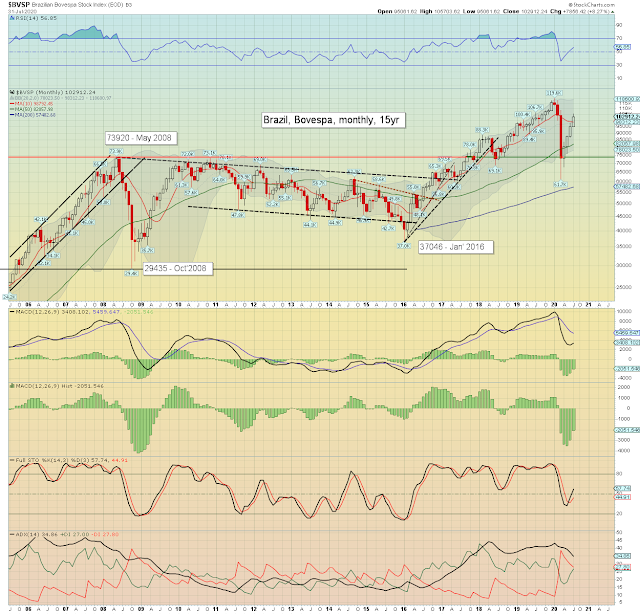 Brazilian equities climbed for a fourth consecutive month, the Bovespa settling +7856pts (8.3%) to 102912, notably back above the 10MA. There is no real resistance until the January historic high of 119k. 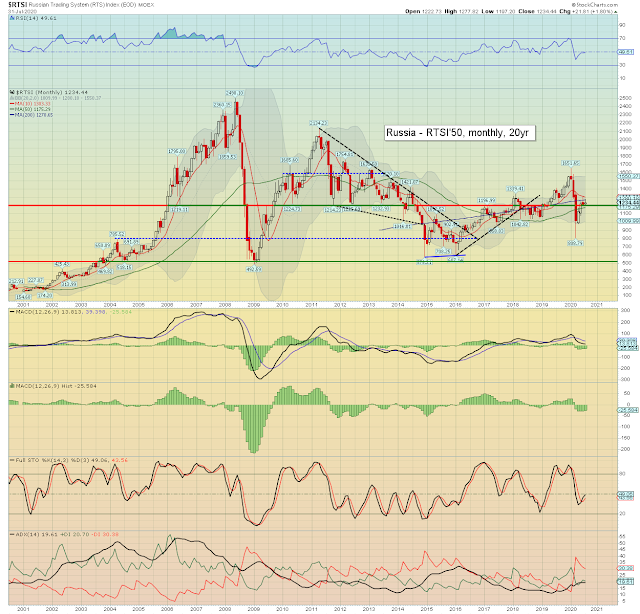 Russian equities battled upward, settling +21pts (1.8%) to 1234. Whilst this was a third monthly settlement above key price threshold of the 1200s, it was still under the 10MA. 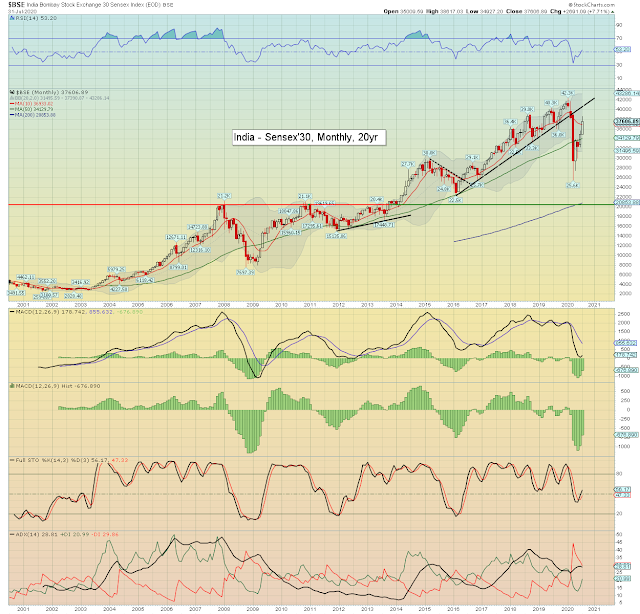 Indian equities climbed for the third month of four, the Sensex settling +2691pts (7.7%) to 37606, the first settlement above the 10MA since January. The July candle is a little spiky, as the market is due a multi-week cooling wave. 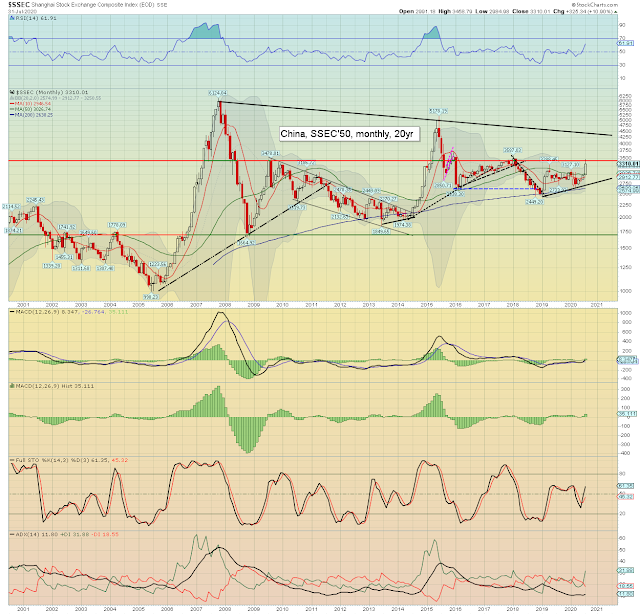 The Chinese market lead the way higher in July, settling +325pts (10.9%) to 3310. The July candle is notably spiky from around key price threshold of the 3400s, with an intra high of 3458. China bulls need a decisive break >3500 to have confidence of broader upside into year end, whilst bears need to break below the March low of 2646. 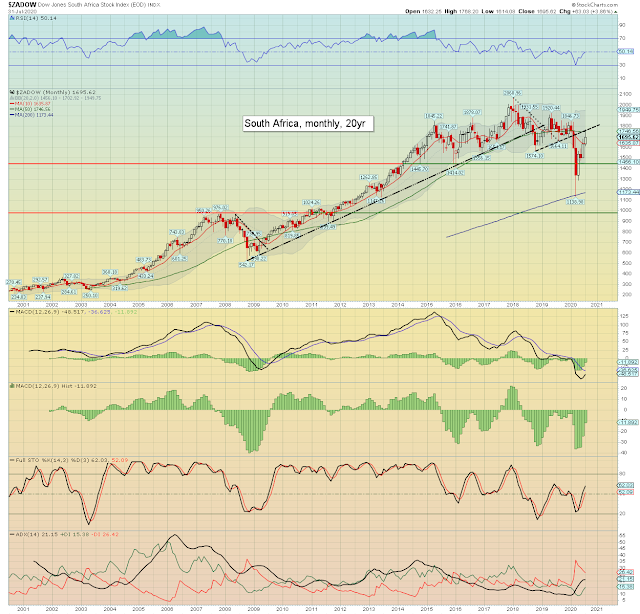 The South African market climbed for the third month of four, settling +63pts (3.9%) to 1695, which was the first settlement above the 10MA since Dec'2019. Higher gold prices are certainly helping, for what is one of the top ten producer countries. 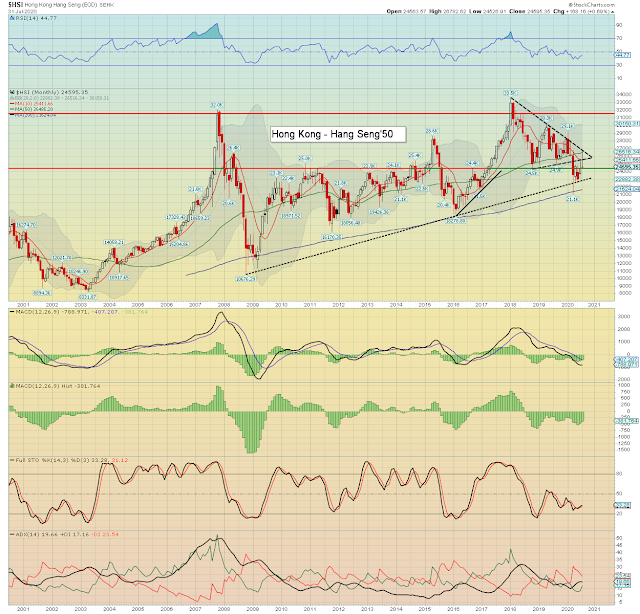 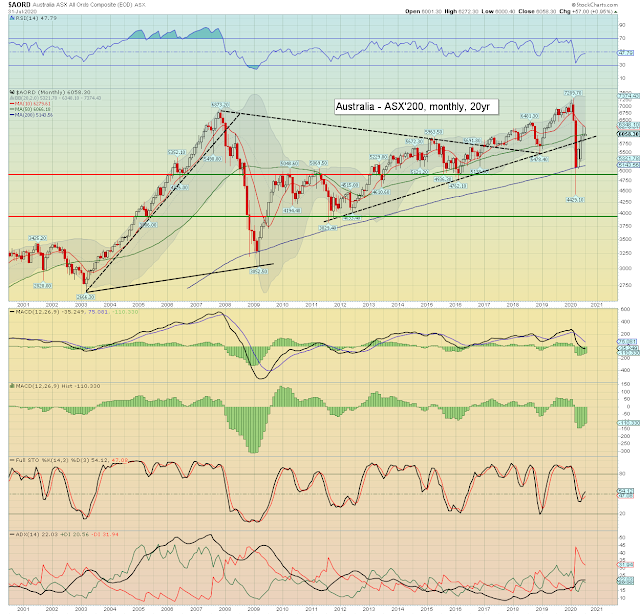 Australian equities climbed for a fourth consecutive month, settling +57pts (0.9%) to 6058, but still below the 10MA. The June and July candles are both spiky on the upper side, and indicative of s/t bullish exhaustion.
–

China and Brazil lead the way higher, with Germany and Japan lagging.

Of the ten world markets, the USA, Germany, Brazil, India, China, and South Africa, settled above their respective monthly 10MA, whilst Japan, Russia, Hong Kong, and Australia, settled below.
-

Another busy week is ahead, with a mid size truckload of earnings, and econ-data, some of which will be reflective of a stalled reopening.

July was broadly bullish for world equity markets, not least for the US, which saw the Nasdaq break a new historic high. For now, there is near zero sign of a short/mid term ceiling/turn.

Despite the attempt to reopen, there remain monstrous economic problems, as a result of the 'response' to Corona. Note the emphasis on response. It wasn't the Corona that destroyed tens of millions of businesses, it was directly due to the lockdown policy of various national governments. It is sometimes darkly amusing to see the mainstream media hacks - not least those on CNN, FOX, and CNBC, talk about how Corona destroyed the world economy, when the fact is that it was actually due to the chosen response.

Staying on the matter of Corona. Do you hear the ticking clock right now? Way back in late January - when it became clear what was coming, I mentioned there would be a 'window of opportunity', running from June to September. We're already half way through, and I will merely add that you might choose to use the time... wisely.

August itself should offer some market drama. The June/July candles for many world equity markets are indicative of s/t bullish exhaustion, as a multi-week cooling wave is overdue.

Then there is the issue of the Fed. Having already bought corp' bonds, it should be clear they will eventually resort to buying equities. I'm currently unsure as to whether they will be stupid enough to follow the dark path of the BoJ and ECB - with NIRP, but regardless... sooner or later, Print Central will be buying stocks, not just in the giant Dow components, but the mid and small caps.

If you think life in the twilight zone can't get any more insane, well, just wait until early November.

Have a good weekend
--
*the next post on this page will likely appear 5pm EDT on Monday.
Posted by Trading Sunset at 16:31:00
Email ThisBlogThis!Share to TwitterShare to FacebookShare to Pinterest
Newer Posts Older Posts Home
Subscribe to: Posts (Atom)