With the market coping with QE taper'4, the equity bears were nowhere to be seen, equities held together, and the VIX melted lower, settling -2.1% @ 13.42. Near term outlook is for the VIX to melt lower into the weekend, into the 12/11s. 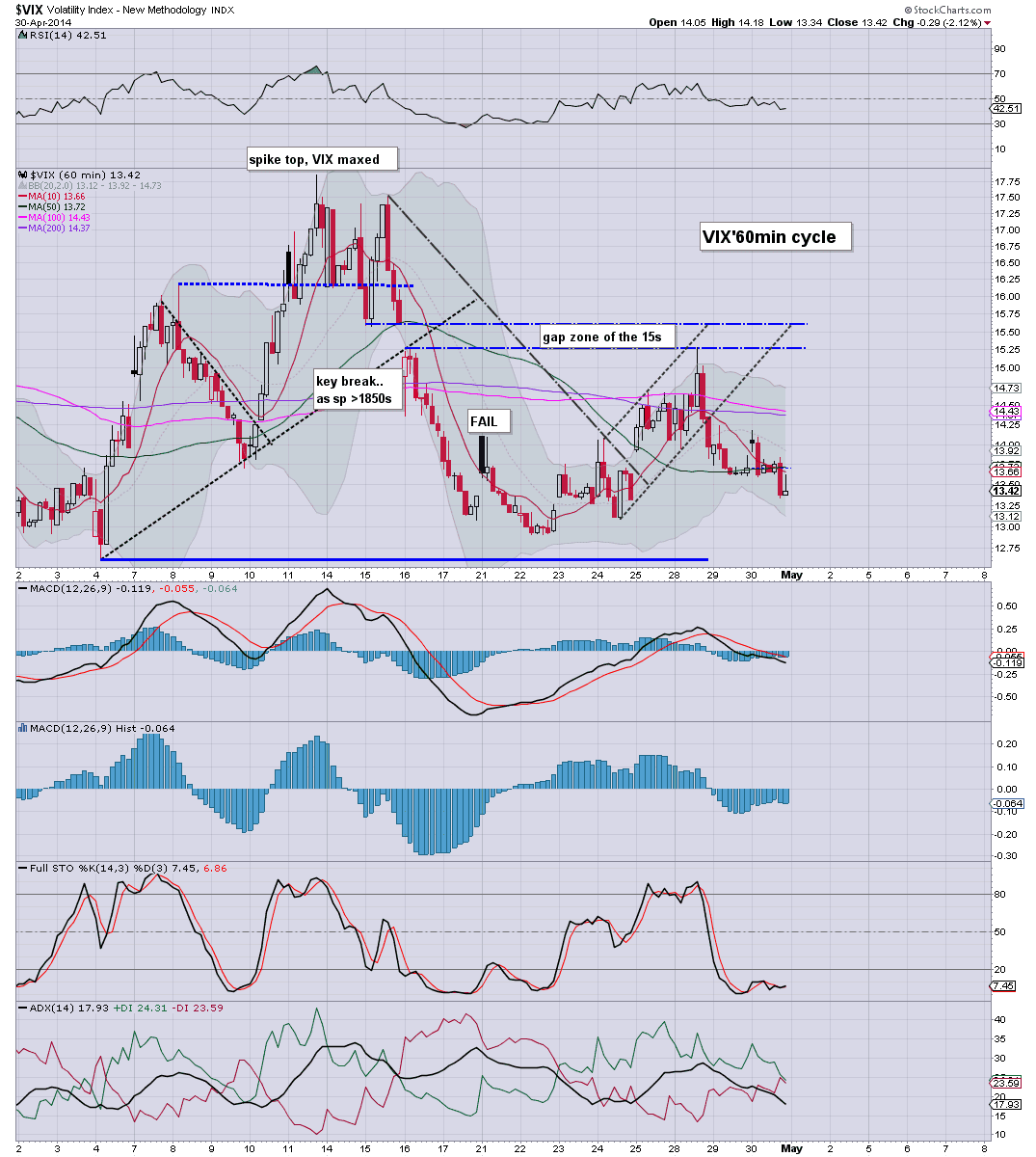 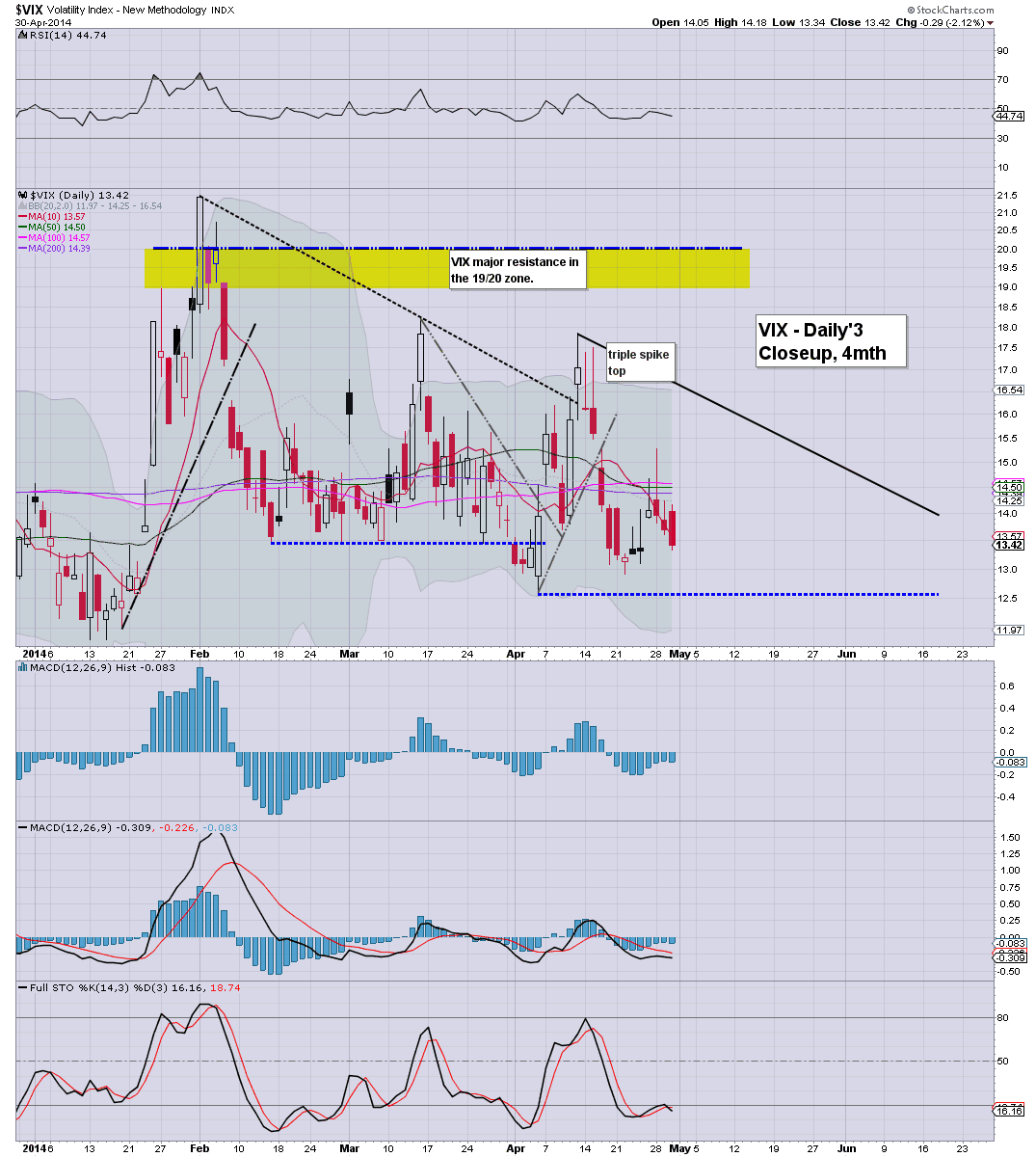 VIX is merely in 'melt lower' mode. The 20s do not look viable for some weeks, perhaps even until the latter half of June.
- 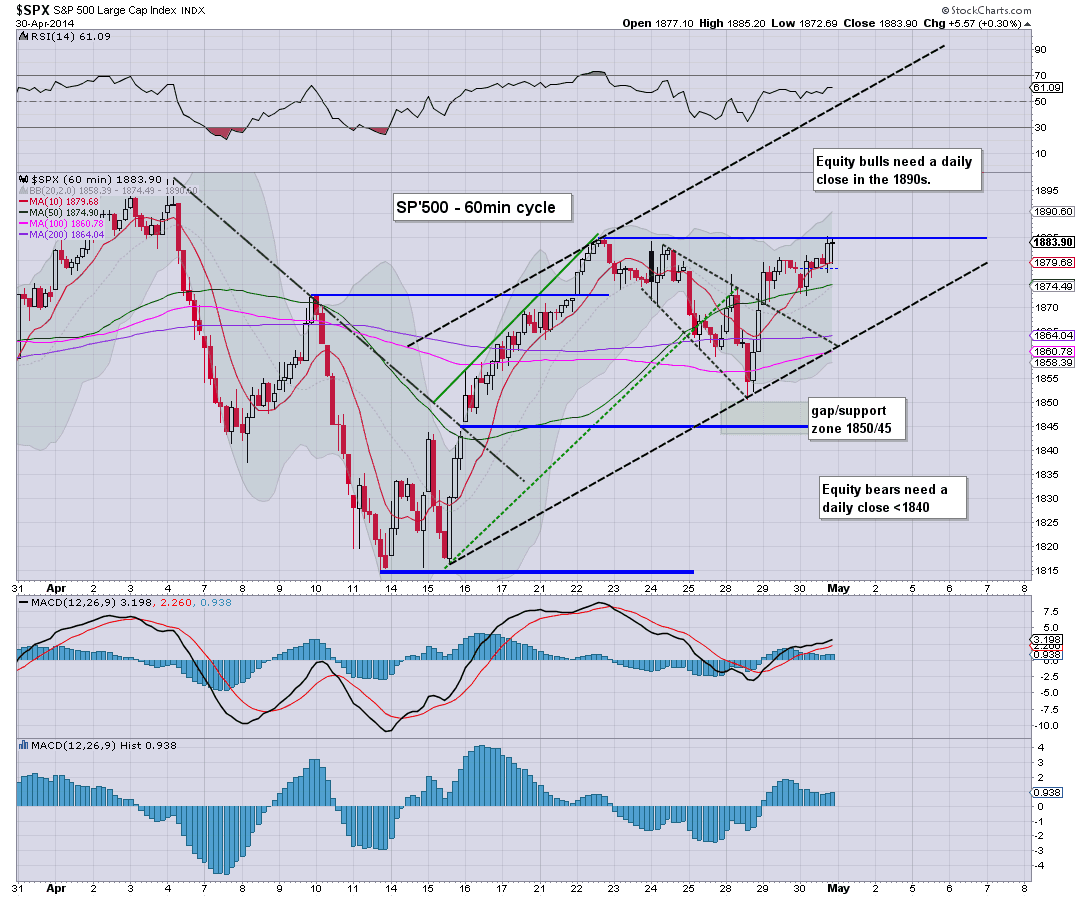 *I dropped all three of my oil/gas drilling stocks - DO, RIG, SDRL, in the late afternoon. I will look to pick at least two of them back up tomorrow, on any minor pull back.
--

So..April trading comes to a close, for the bears...it was a teasing month. Yes, there was some notable declines in the R2K/Nasdaq - and especially the momo stocks, but really, the broader market only fell a maximum of 4-5%.

The fact the sp'500 closed the month with net gains says it all.

Have a good evening
--

more later...on the VIX.
Posted by Trading Sunset at 21:02:00
Email ThisBlogThis!Share to TwitterShare to FacebookShare to Pinterest

With the FOMC (not surprisingly) announcing QE-taper'4, the market is coping very well, and looks set to make a play for the sp'1890s in the remainder of this week. Metals remain choppy, Gold -$4, with Silver -1.8%. VIX is set to melt lower into the 12s. *I just earlier dropped one of the 3 driller stocks I have - DO, (very sig' gain), will try to have the patience to hold RIG and SDRL into Friday afternoon.
--

Well, it has been a cruel tease of a month for the equity bears, I'm still hopeful we'll see that down wave this summer.

Market looks set to close the month with moderate gains for the sp'500.
-

Regardless of the exact close, it has been a day for the equity bulls. Is it pretty noticeable that the equity bears just simply failed to show up today.

I'm getting a little twitchy..seeking to drop a second driller.. SDRL....

Market seeing minor chop...a touch of weakness seems likely, but certainly, net monthly gains..overall for the sp'500.
Posted by Trading Sunset at 19:51:00
Email ThisBlogThis!Share to TwitterShare to FacebookShare to Pinterest

The Fed is set to announce QE taper'4, taking the QE fuel down by a further $10bn to $45bn a month. Any talk of 'extended period of low interest rates' would likely be used by Mr Market as an excuse to rally into the daily..and monthly close. 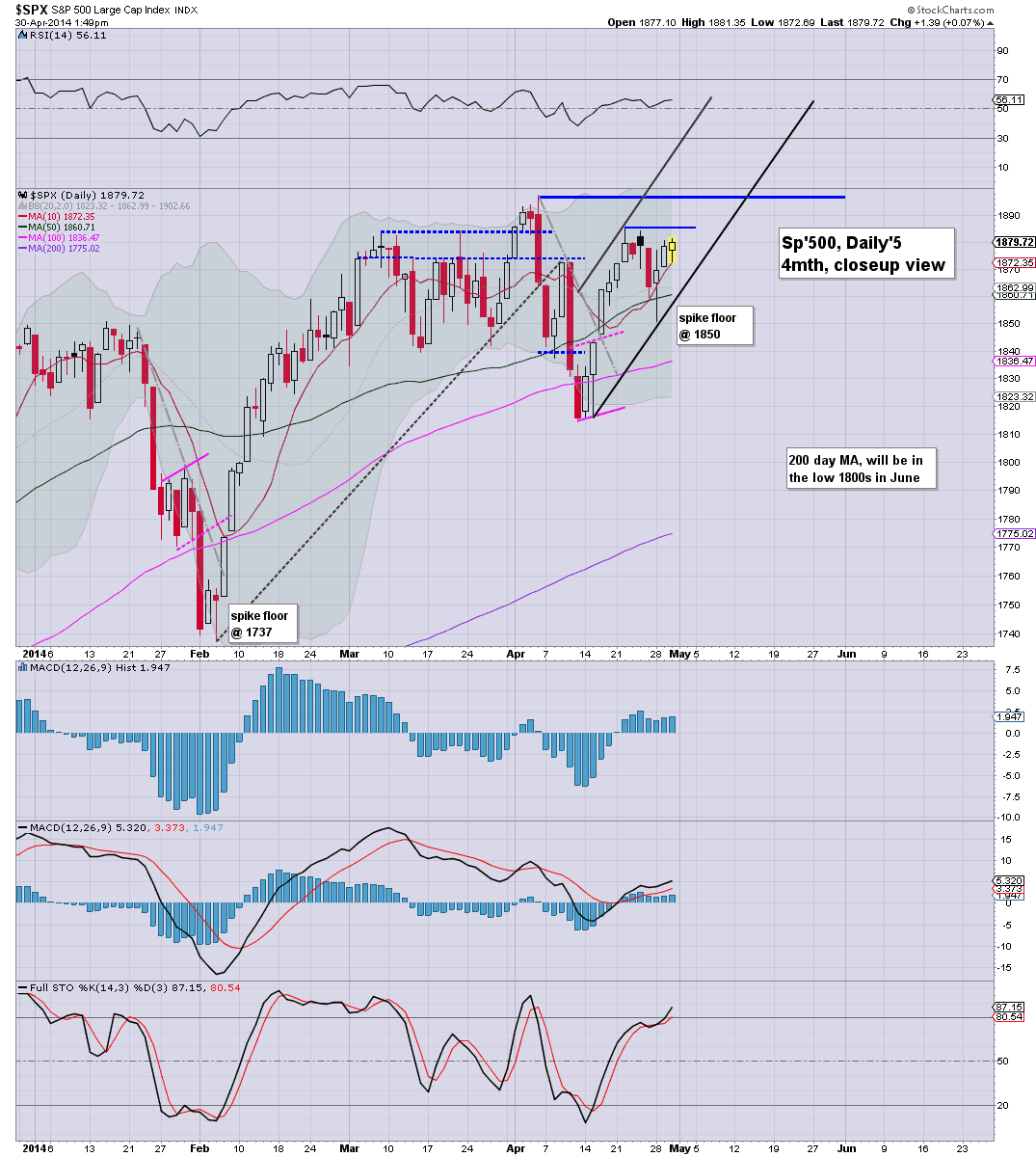 What is impressive - for the equity bull side, is seeing how well the market is coping with QE being reduced.

*QE schedule for May issued at 3pm. I'm curious as to if any QE-pomo Thur/Friday.

The only concern for the bulls is the Friday monthly jobs data. If that comes in >175k, then market should close the week in the 1890/1900 zone.

It would seem just a matter of time before we break 1884, which will trigger a fair few short-stops.

Anyone on the short side is in high danger of being nailed into the close.. sp'1890s are well within range.

2.41pm.. still stuck under the 1884 threshold...oh well, if not today, then tomorrow or Friday. Makes little difference.

STX, what is up with that today? Getting the smack down, despite reasonable numbers.

US markets (and yours truly) are patiently awaiting the latest FOMC announcement. The Fed is set to reduce the monthly QE fuel by a further $10bn, to $45bn, starting tomorrow (a new QE schedule is due at 3pm today). Metals are weak, but offering a reversal. 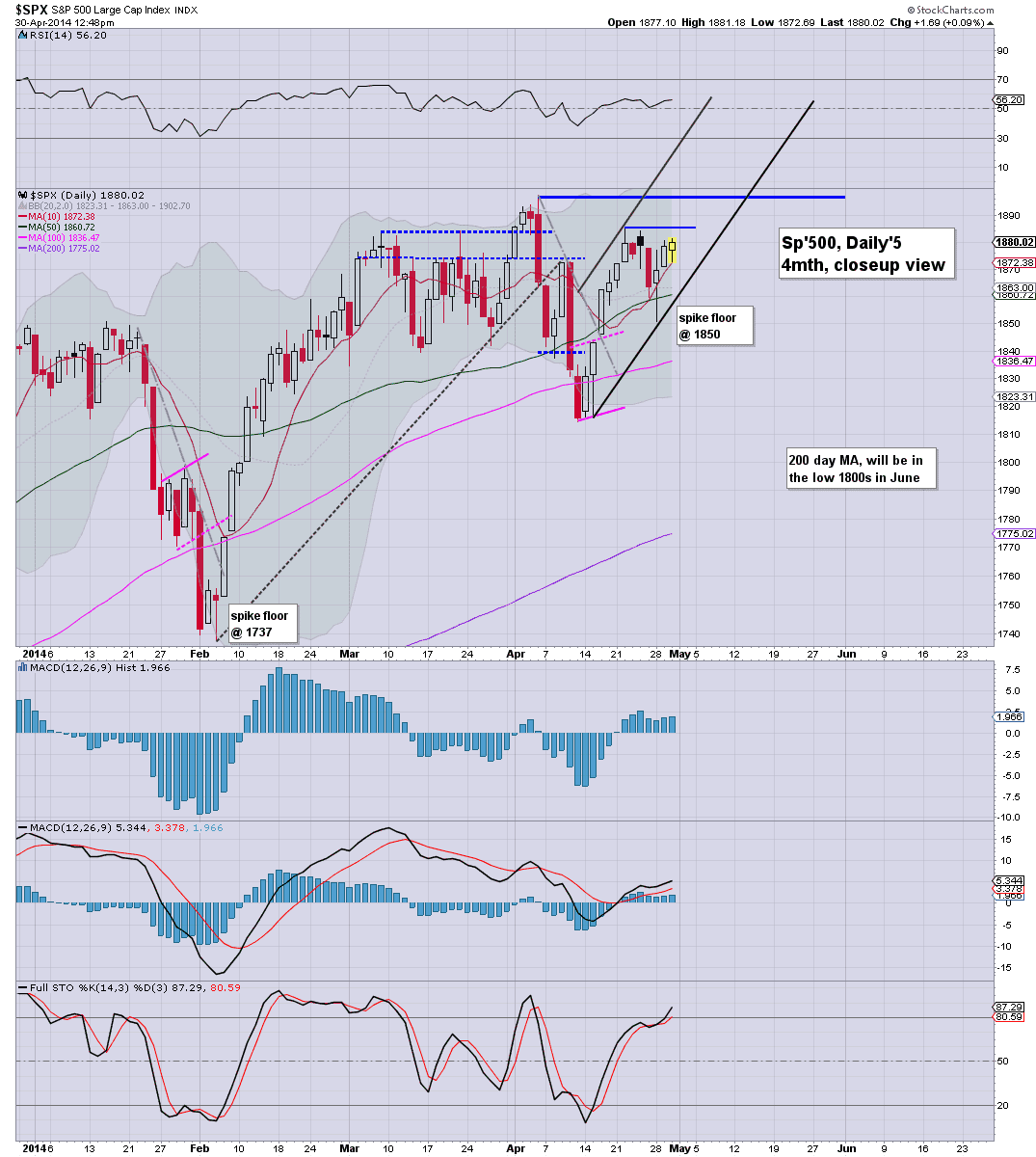 *notable reversal in a fair few stocks this morning, not least my own three drillers of DO, RIG, and SDRL. I am curious to see how they close today. 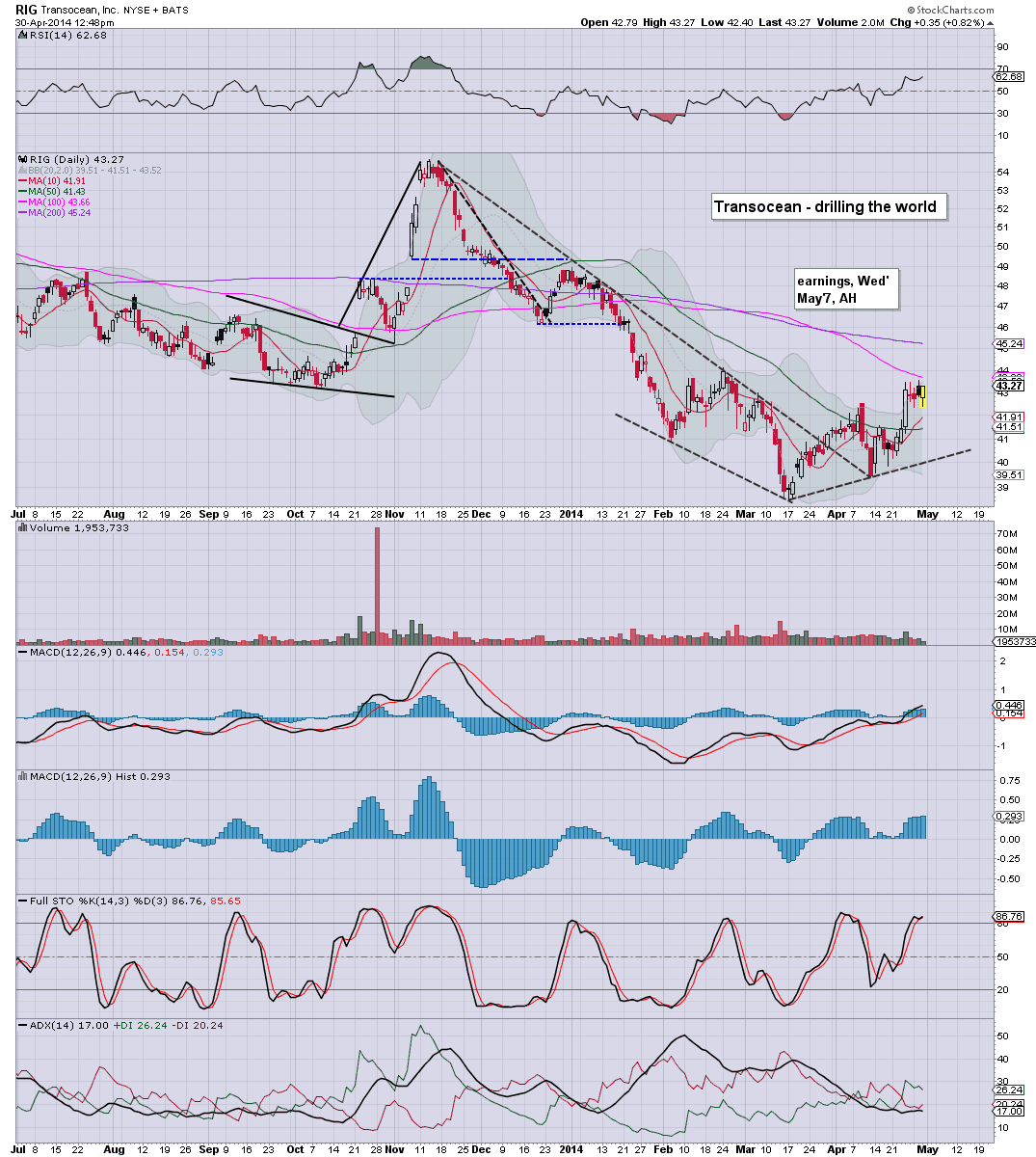 --
back..just before 2pm !
Posted by Trading Sunset at 17:49:00
Email ThisBlogThis!Share to TwitterShare to FacebookShare to Pinterest

Equities look set to remain in a holding pattern ahead of the FOMC announcement at 2pm. From there, the big unknown is how will the market cope? Unlike last time though, there is no post Yellen press conf'. Metals have recovered slightly from earlier lows, Gold -$3 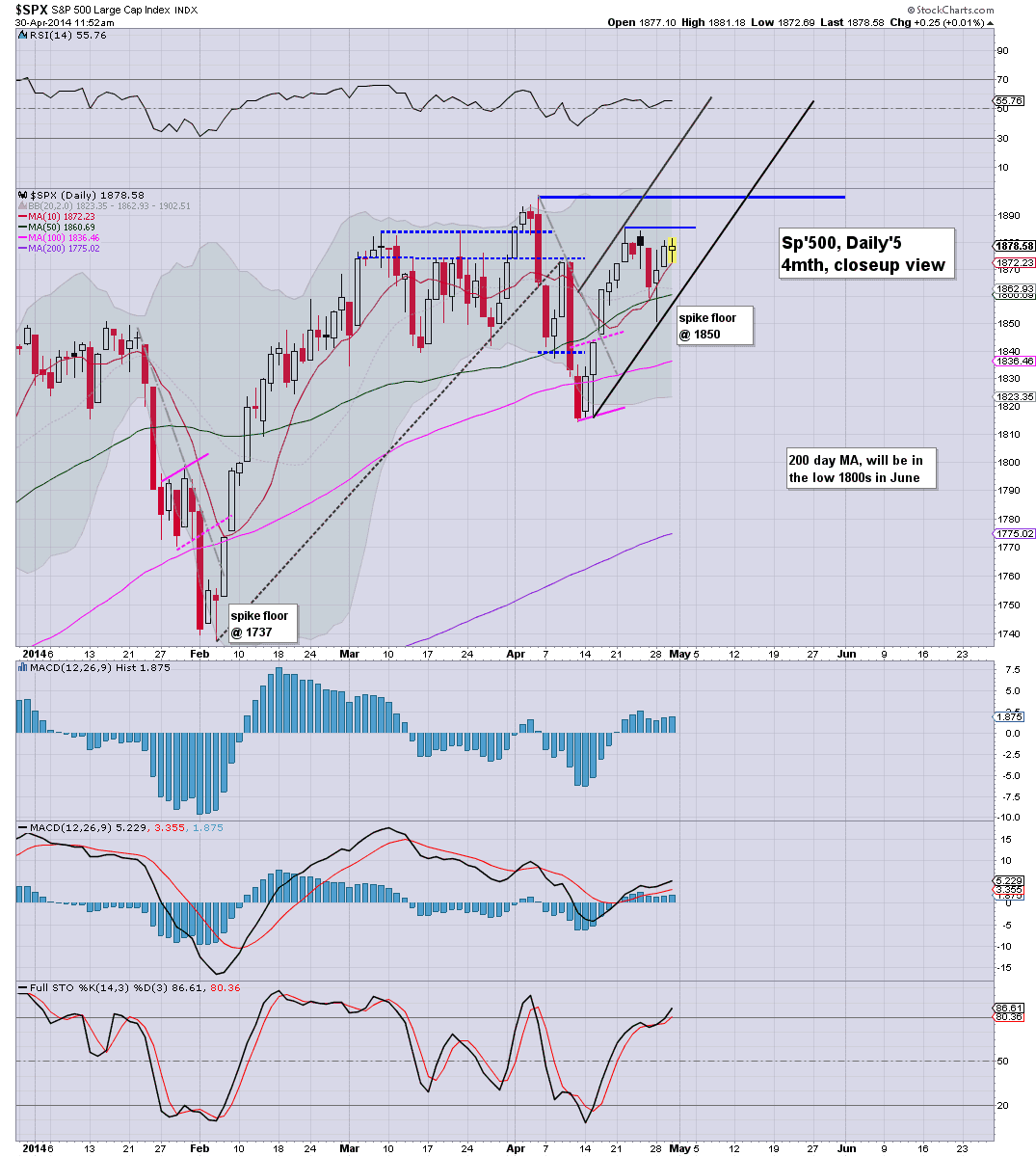 So..probably two hours of very minor price chop. No doubt we'll likely get a few swings around 2pm..but how will we close the day...and month?

This mornings open was again indicative that the equity bears lack any real downside power, and I would not be surprised if talk of 'extended low interest rates' in the Fed press release will be enough to break >1884...with a daily close in the 1890s.

It remains a nasty market...

As it is, I remain heavy long, and so far today...it has been difficult. Even STX reversed to the downside...urghh.

I should note, from 2pm onward, I'll be posting frequent intra-hour updates...on what is typical the busiest trading hour of any given month.

time for tea
Posted by Trading Sunset at 16:58:00
Email ThisBlogThis!Share to TwitterShare to FacebookShare to Pinterest 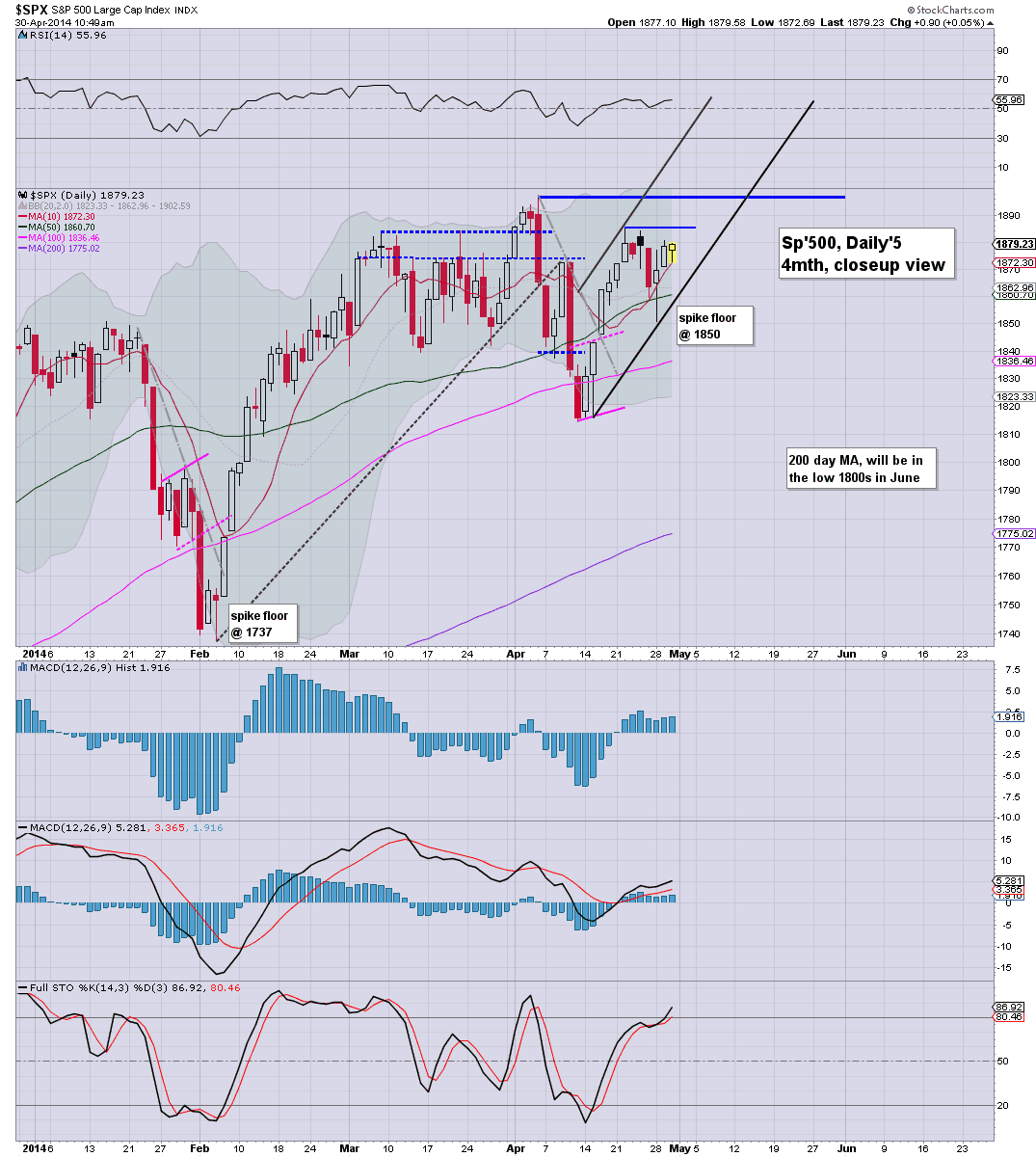 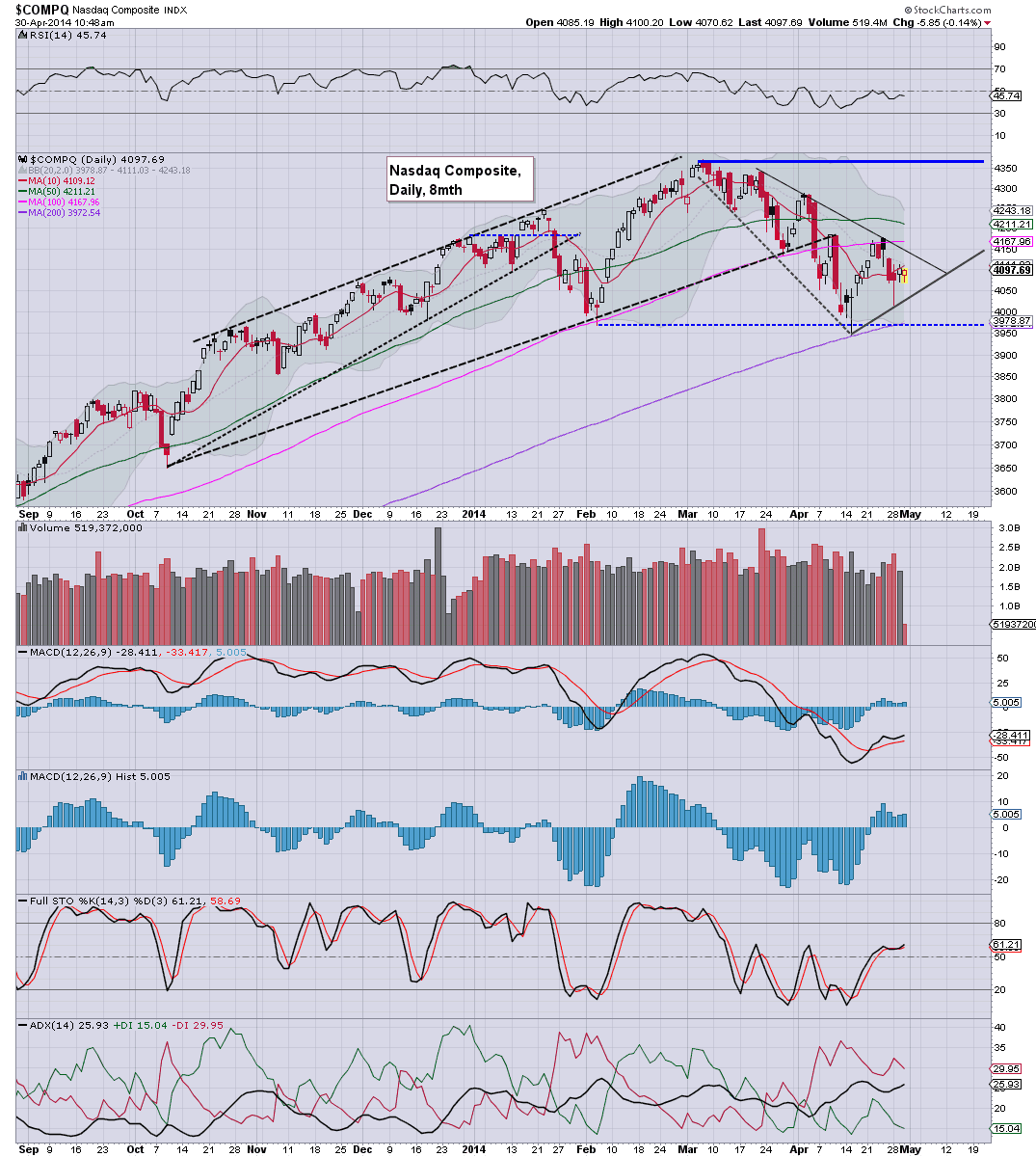 *I'm more inclined to watch the Nasdaq, as a clearer sign that Monday was a key floor
--

Suffice to say, equity bears should be somewhat dismayed at the markets response to what was a relatively dire GDP number.

Yet, ADP jobs and the Chicago PMI came in okay, so..there was that.

Anyway...the FOMC announcement..2pm...but then..we know what is coming, the unknown is how will the market trade into the daily/monthly close.

--
Time for an early lunch
Posted by Trading Sunset at 15:50:00
Email ThisBlogThis!Share to TwitterShare to FacebookShare to Pinterest

10am update - holding together relatively well

Considering what was a borderline recessionary GDP print, the US markets are holding together relatively well. How we close today..and the month is currently very difficult to call, not least with the FOMC announcement. We know that QE taper'4 is likely, but how will the market interpret it? 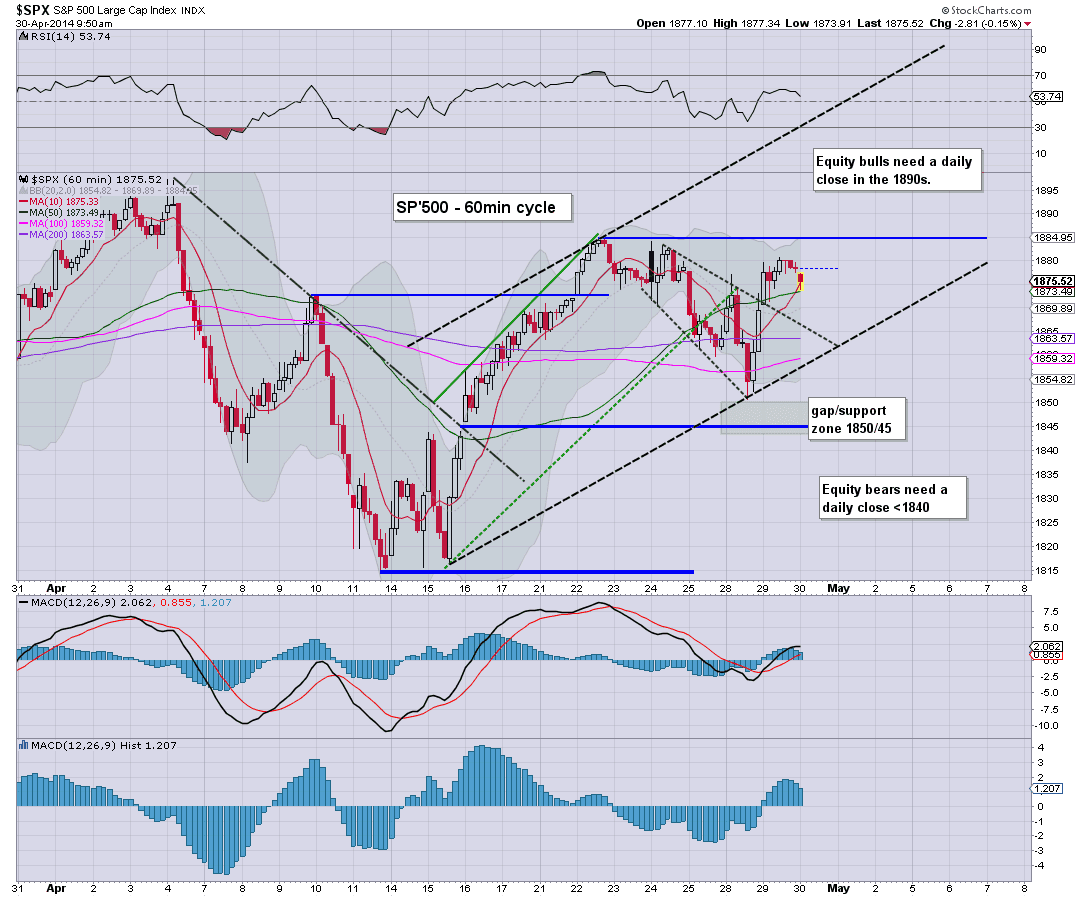 Suffice to say, it is going to take some time for many to fully digest this mornings GDP data.
- 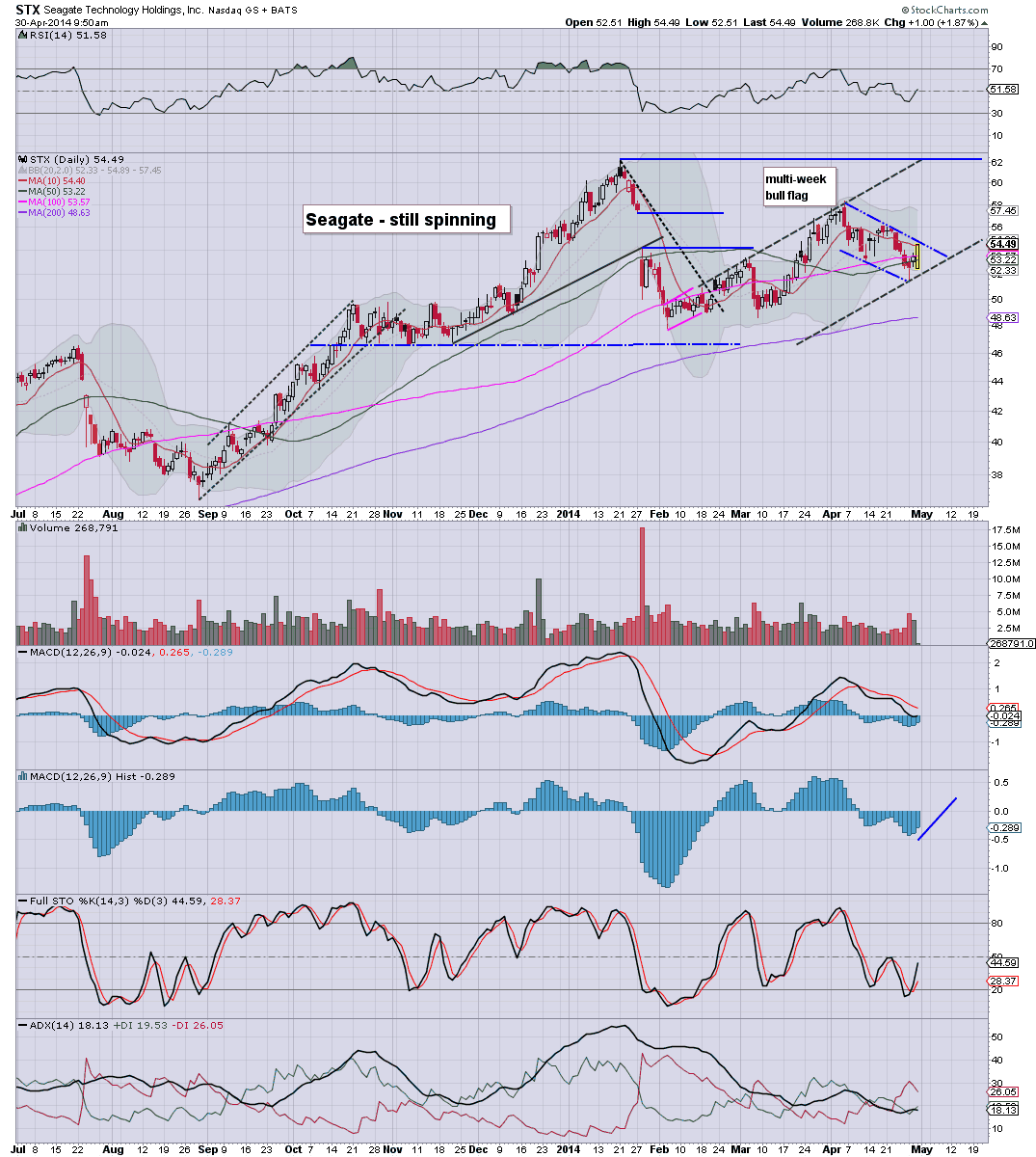 I am seeking a break above what I believe is a bull flag, first target upside is 56/57..which is possible by the Friday close.
--

Sure is choppy, should quiet down into the early afternoon, ahead of the Fed.

First upside target for the bulls remains a break of the recent 1884 high. If broken, then 1895/1900 by late today.
Posted by Trading Sunset at 14:50:00
Email ThisBlogThis!Share to TwitterShare to FacebookShare to Pinterest

Good morning. Futures are a touch lower - ahead of key econ-data, sp -1pt, we're set to open at 1877. Metals are weak, Gold -$6, with Silver -1.1%. Equity bulls just need to clear >1884, whilst bears should be at the prayer stage by now. April is set to close with minor net monthly equity gains. 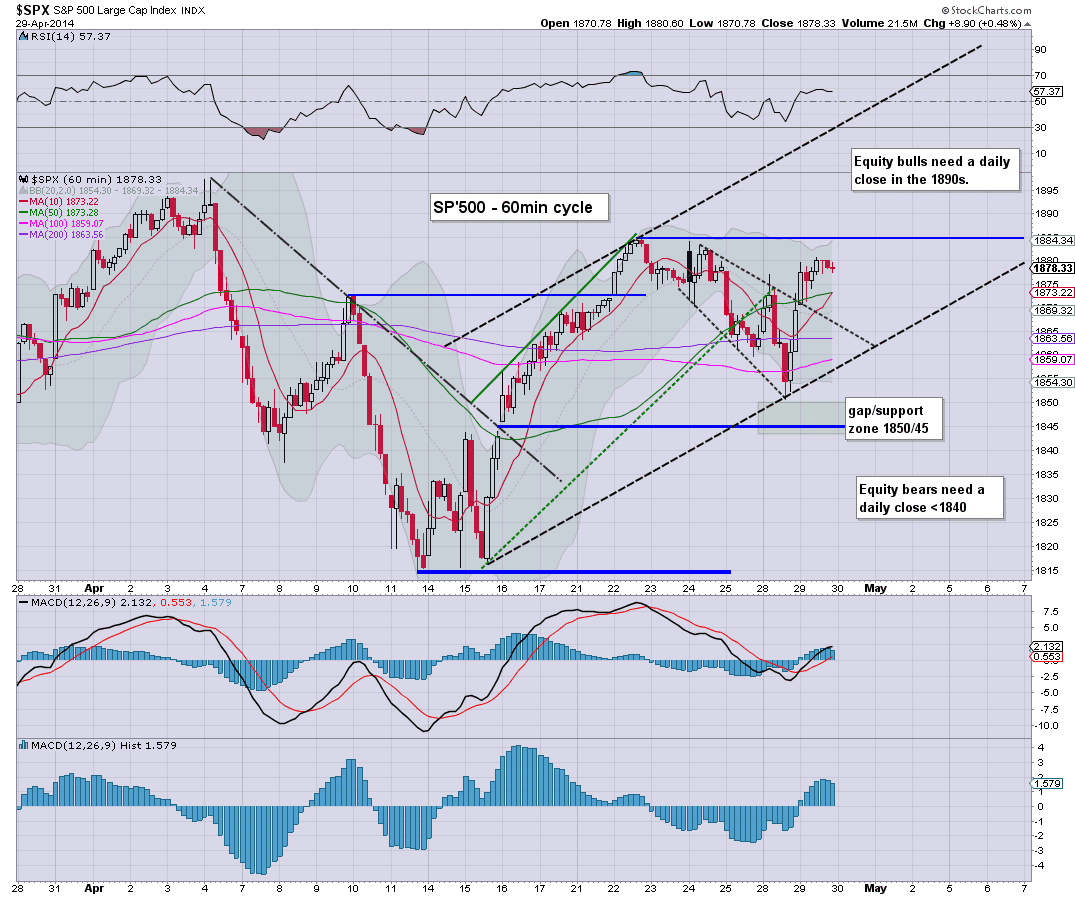 The levels are pretty clear.

Oscar didn't say it in words, but it looks like he is seeking the recent low of sp'1814 to be taken out in a down wave starting this afternoon. Although he did note, if we instead break higher, they will be major buyers from Thursday onward.
-


8.15am.. ADP jobs, 220k private sector net gains for April... a very reasonable number, but as ever, the more important one will be the BLS monthly on Friday.

Indexes are not snapping particularly lower though.  sp -3pts..so far.


9.37am  I see a market where a fair few things are already starting to turn green.

VIX battling to hold minor gains of just 2%, which should be a concern for the equity bears.

To the surprise of many (not least myself) the US Federal Reserve, lead by the Bernanke, did start to taper QE last December. The fact they have continued is even more surprising. Wednesday looks set for taper'4, taking the monthly QE fuel down to a 'mere' $45bn, an annualised rate of $540bn. 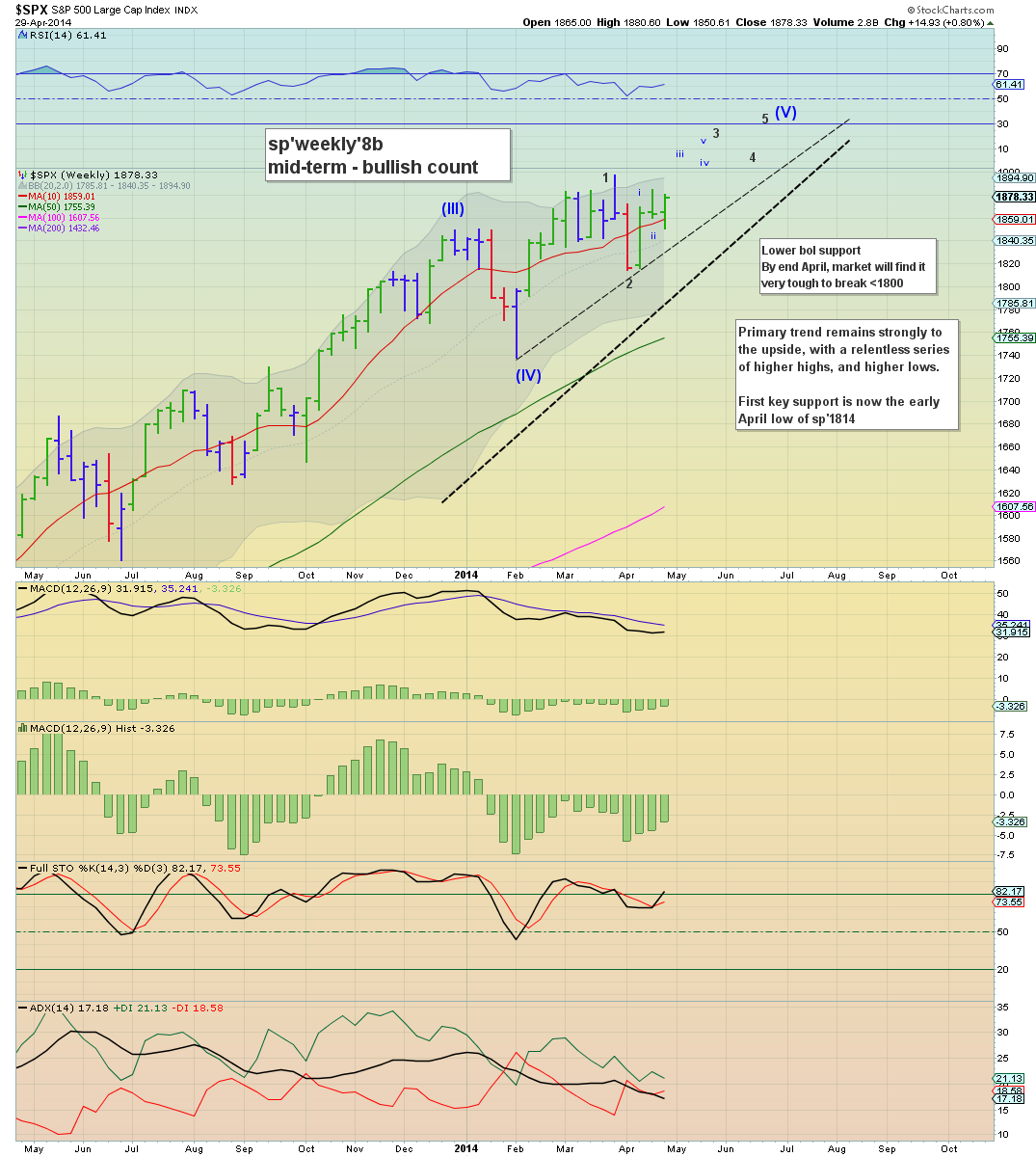 So, today was more of a bullish day, price action showed no sign of the equity bears. If Mr Market can cope with the next QE taper, and a few pieces of econ-data, we look set to begin May very close to the next psy' level of sp'1900.

Best guess is that we do battle higher into the 1925/50 zone this May, and then get stuck - although we might see a fair few weeks of chop into early June, before the next multi-week down cycle.

To be clear, I am STILL seeking a very significant multi-month down wave this year, with a primary target zone of sp'1625/1575.

Wednesday is arguably the most important day of this week, there is a lot for the market to digest.

First, we have the ADP jobs, but far more important...

Q1 GDP, market consensus is only seeking 1.1% growth, which frankly I expect to be comfortably met. Indeed, if we see >1.5%, I'd expect the market to be particularly pleased, and use it as an excuse to break back into the 1890s - ahead of the FOMC announcement.

There is also the Chicago PMI at 9.45am.

Indeed, the FOMC are set to announce QE-taper'4 at 2pm. There will not be a post Yellen press conf', which the bulls should be somewhat relieved about.
-

Yours truly is holding five positions, all on the long side. As ever, I will seek to drop them all by the Friday close, not least since I prefer to have no positions across the weekend.

Regardless of how tomorrow goes, there is still the big monthly jobs data on Friday. That will be another possible excuse for the market to break into new historic territory - to be lead by the Dow/SP.

For those on the short side, especially those holding from over two weeks ago, this is indeed a difficult time. A break <1840 (weekly support) looks very unlikely, never mind the key low of 1814. 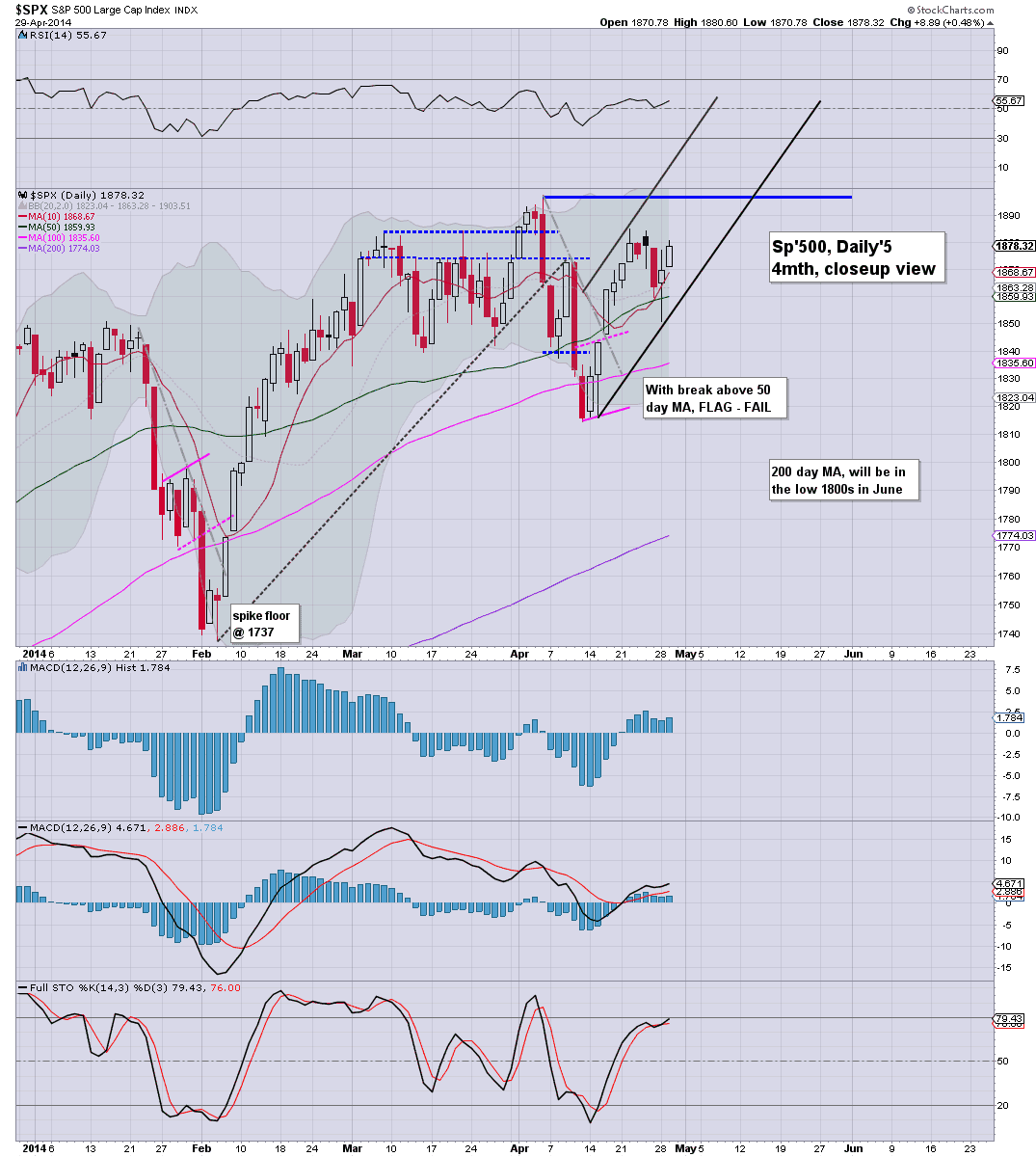 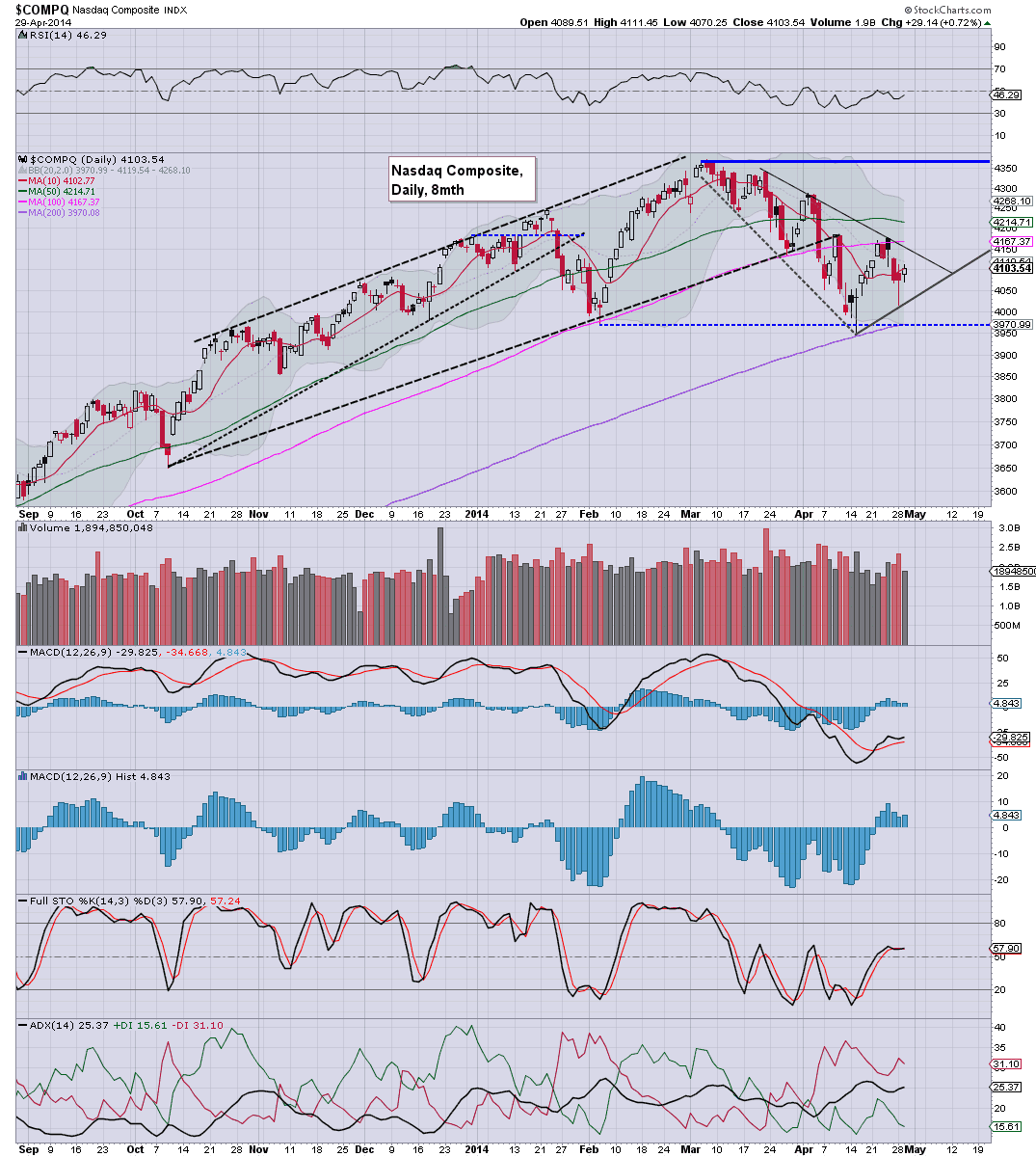 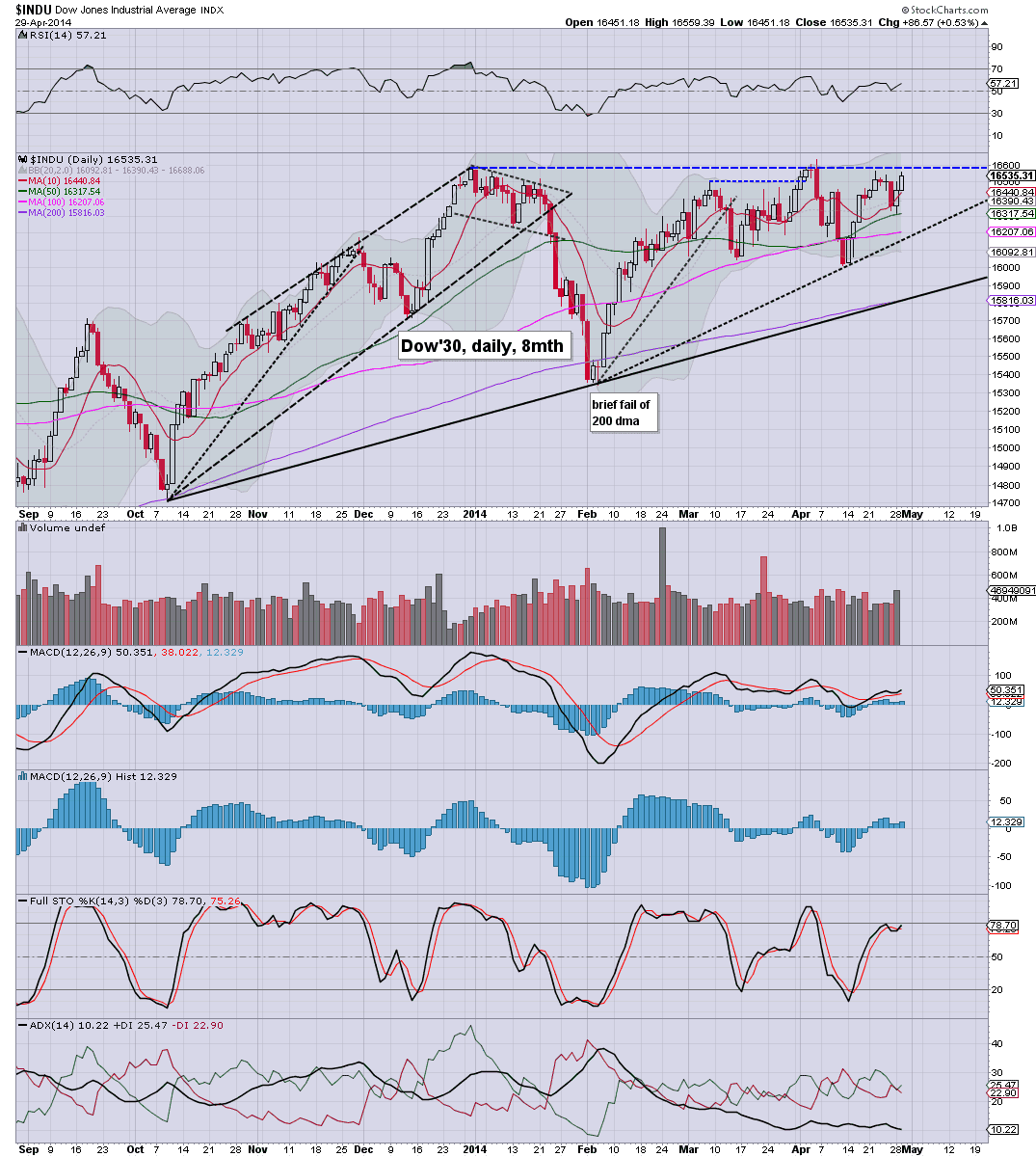 All things considered, the daily charts - esp' the Dow and SP'500, bode for much higher levels in May. Even the Nasdaq which saw a much deeper retrace, looks set to break upward before the weekend.