Despite the main indexes battling another 1% higher, the VIX was in positive territory for the entire day. There were early morning VIX gains of 5%, but as is usually the case, the VIX cooled into the close, resting +1.75% @ 12.77. 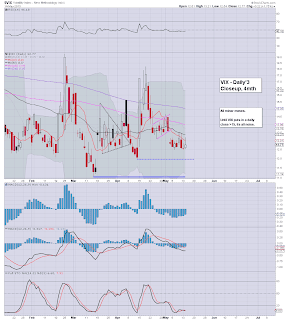 Whilst the VIX remains at such low levels, all moves are to generally be dismissed as 'mere noise'. Today was no exception.

Baring a break into the 15s, VIX is to be largely ignored.

It remains a wonder if we'll even see VIX in the 20s at all this year.
--
Posted by Trading Sunset at 23:00:00
Email ThisBlogThis!Share to TwitterShare to FacebookShare to Pinterest

Most of the indexes closed with gains of around 1%. Transports was again leading the way, with gains of 1.9%, in the upper 6400s. The close in the sp'1650s was yet another level that should rattle all those bears currently seeking a near term major down cycle. 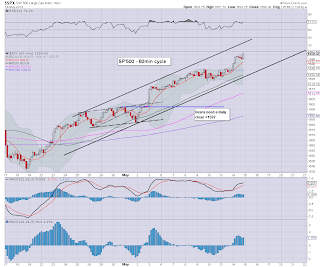 So..another Tuesday, fuelled by QE-POMO, aided by the HFT algo-bots, and cheered on by the maniacs on clown finance TV.

The only issue is whether its more 'months' or 'years' of this nonsense. I'm really starting to resign myself to the latter.
--
Posted by Trading Sunset at 21:00:00
Email ThisBlogThis!Share to TwitterShare to FacebookShare to Pinterest

Whilst the main indexes look set to close another pomo-Tuesday with moderate gains, Oil remains especially weak, with USO currently -0.9% @ 33.55. Anything <33.40 would pose a problem, effectively breaking the trend that has endured since mid April. 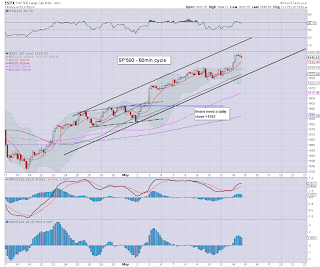 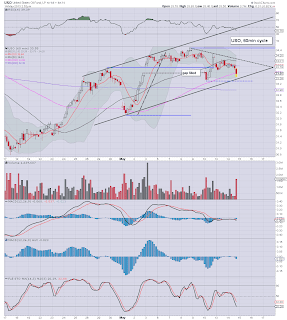 It looks like we're just forming a baby bull flag on the hourly index charts.

There is no reason why we won't be higher by the Friday close, somewhere in the 1650s.
---

*with the EIA oil report due tomorrow @ 10.30am, I am very wary of taking on a long position.

So, I shall wait, and see if we get a brief drop tomorrow, before the next cycle higher.

The main indexes are still holding gains of around 1%. Precious metals and Oil remain the two weak spots, but even those declines are only minor. Near term trend looks relentless. Algo-bots have potential for melt into the close, with sp'1650s. 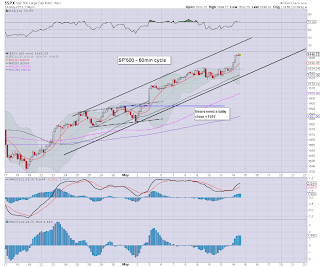 Little to add, aside that with no sellers, its unlikely we'll see any weakness into the close, quite the contrary in fact.
--

*The Oil report is tomorrow morning. I think there is still potential for a 1% drop, before much higher levels into the Friday close. 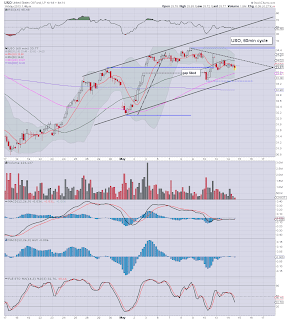 I will most certainly seek to go long Oil (via USO) after the EIA report tomorrow, a good time seems around 10.45/11am.

Posted by Trading Sunset at 18:51:00
Email ThisBlogThis!Share to TwitterShare to FacebookShare to Pinterest

The main indexes are holding reasonable gains of around 1%. The metals and Oil remain a touch weak, with VIX +2%. USD is moderately higher. Near term trend looks relentless for equities, and I'd have to guess commodities will eventually play catchup. 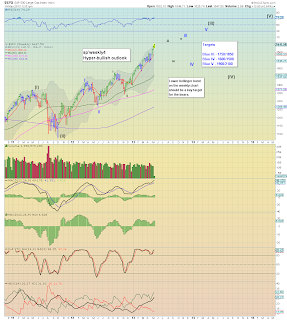 I have posted this a few times lately. I've changed it a little, but I am increasingly liking the count as I have it.

Not exactly the most bearish of charts is it?
--

If the above chart is broadly right, we'll see two very minor pull backs this year, but smaller in size than the ones of 2012.

Right now, it looks like no major down wave until late spring 2014. 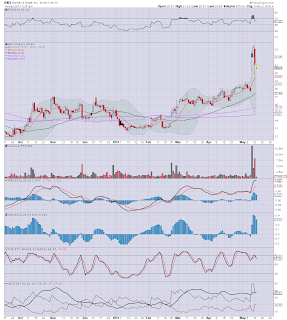 More downside looks likely, even with the main market rising.
Posted by Trading Sunset at 17:55:00
Email ThisBlogThis!Share to TwitterShare to FacebookShare to Pinterest

Another Tuesday, fuelled by pomo, with no sellers, 'some' buyers, and the HFT algo-bots helping to melt everything that little extra bit higher. A close in the sp'1650s now looks viable, and that will no doubt rattle those bears currently short. 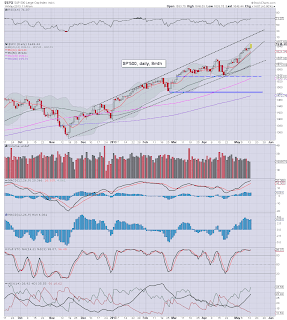 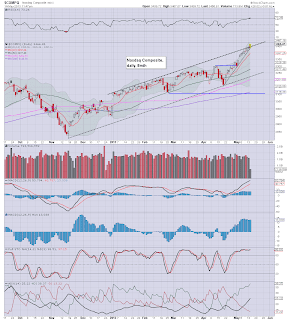 A simple view of the Nasdaq shows it now above the daily upper channel, and indeed, the current trend is an accelerated one.

Higher and higher...faster and faster.
--

How can anyone think of shorting that?
--

Oil is a touch higher, and I won't be chasing it here.

back at 1pm
Posted by Trading Sunset at 16:51:00
Email ThisBlogThis!Share to TwitterShare to FacebookShare to Pinterest

Whilst the market just keeps climbing - on a pomo-Tuesday no less, I have to note how important trading account preservation remains in the months and years ahead. There will come a time when we get a major down cycle...but it sure don't look likely any time soon. 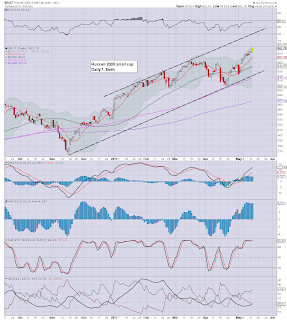 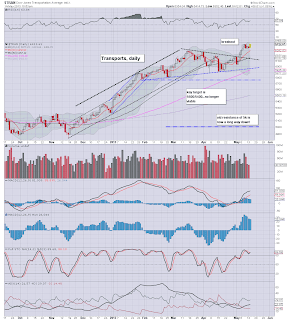 Regardless, this is NOT the time to be meddling on the short side.

Gods help those bears who are short, and not using trading stops in the months ahead, whilst this QE nonsense continues.
--

RE: VIX, Yes, its up almost 5% now, I don't know. Maybe someone is buying huge blocks of calls, I'll take a look in a bit.

VIX opex is next Wednesday, so I'm not sure whats up with todays VIX gain.
Posted by Trading Sunset at 15:57:00
Email ThisBlogThis!Share to TwitterShare to FacebookShare to Pinterest

We're off and running...to new highs. With very few sellers, the algo-bots look set to take control of today, a $3bn pomo day no less. Precious metals and oil remain a touch weak, but it really isn't anything significant, and the near term trend for both looks upward. 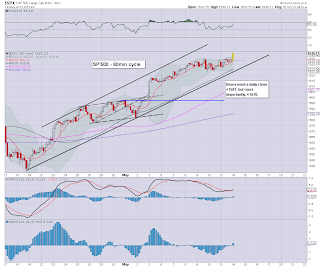 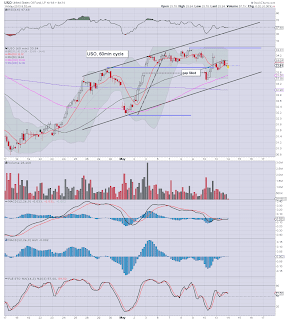 There is no reason to expect this nonsense will end any time soon.
--

another seemingly ugly Tuesday for those in bear land.
--

10.24am. Yes, I've noticed the VIX +3%, whilst sp+9pts..but I think the VIX is to be dismissed as mere noise.
Posted by Trading Sunset at 14:54:00
Email ThisBlogThis!Share to TwitterShare to FacebookShare to Pinterest

Good morning. Futures are a touch higher, sp +1pt, we're set to open around 1634. Precious metals and Oil are both moderately weak, -0.5%. Today is a 3bn QE-pomo day, and there is little reason why we won't be closing in the 1640s. 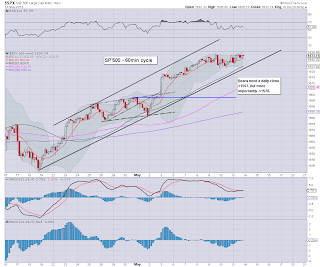 Certainly, we're seeing a little weakness in a few things out there, but once again ,its nothing significant. 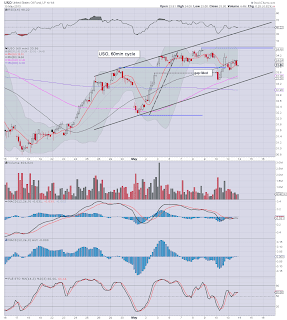 It would seem very unlikely USO going under 33.20. Perhaps 33.50/40s this morning, but higher into the afternoon?

no doubt, some bears getting the boot here.

Oil is lower, but it sure ain't interesting to me at that price.
Posted by Trading Sunset at 14:00:00
Email ThisBlogThis!Share to TwitterShare to FacebookShare to Pinterest

Nightmare for the doomer bears

The primary trend has been up for over four years now, and there remains absolutely no sign of it ending. With the Fed still doing $85bn of QE a month - along with other central banks, the bears face months, perhaps a few more years of waiting for a significant wave lower. 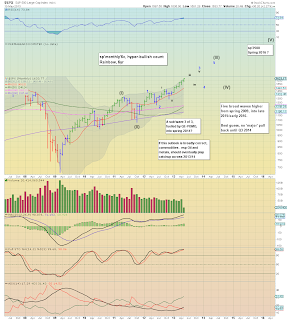 Indeed, the scary outlook for the bears is that this QE-fuelled rally continues for another 2-3 years. When the next major down cycle of 12-24 months does occur, we might be starting from levels that are double from where we currently are.

The above chart is just one of many outlooks I am keeping in mind. After all, if the bears - even yours truly, have learnt anything from the last few years, its to keep more than one scenario in mind, especially when that single outlook is a bearish one.

*Regarding the above chart, its an outlook that is greatly shaped by the ECM cycle (Armstrong, M.).

However you might like to count the last few years, the current trend remains unquestionably upward.  What is especially interesting in the past seven months is the near relentless melt higher. I've little doubt this is due to the new QE-pomo program, - and aided by the default 'melt higher' of the HFT algo-bots.

Baring an end to QE-pomo, this market is going to keep on rising for months...if not the next few years.


A few other scenarios 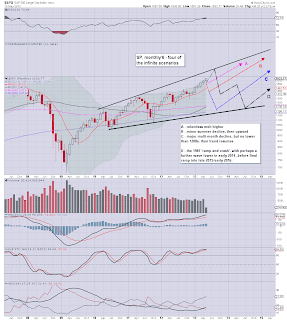 Scenario D is an especially attractive one. Its been twenty months since the last significant fall, so we're more than due a major retracement of 15/20%. Yet, I have to conclude and note that unless the Fed end QE, any hope of a significant wave lower should be put on hold. 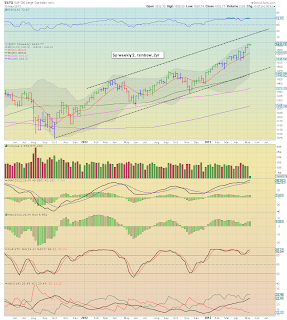 Based on all recent down cycles, that is the 'best case' for the bears, which frankly is an utterly depressing outlook for this summer/autumn.

There isn't much data tomorrow. Best guess, we open a little lower, but battle back  higher across the day. Tuesday is a 3bn POMO day, so the fuel will be there for those algo-bots to melt it higher, so long as there is no significant selling volume.

*One last thing, I realise such bullish charts will annoy many out there, but thats just how I see the market right now. I won't shy away from posting such heresy. If it takes another 2-3 yrs for this nonsense to break....so be it. I will be here. In the meantime, what is imperitive, is to survive further months (even a few years) of bullish hysteria and mainstream delusion.

Those bears that are still around when the next big down cycle comes, it will be beyond the dreams of Avarice.

A very quiet Monday in market land, with the main indexes closing mixed. Weakest was the Transports, but on a daily chart, it looks like a rather clear baby bull flag, highly suggestive of  further upside later this week. Baring a break <sp'1600, mid-term trend looks very strong. 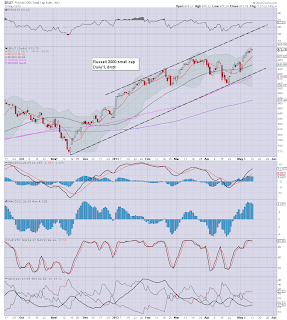 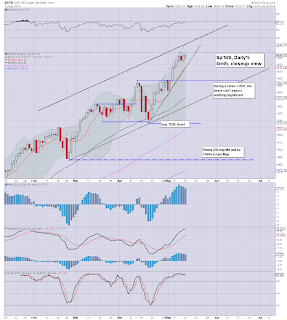 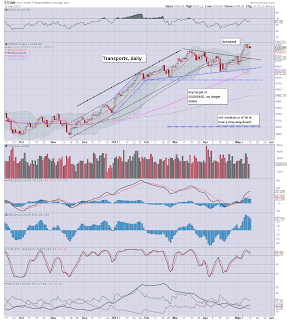 Transports indeed has the most bullish price formation now, with that tiny little bull flag. Considering that QE is still ongoing, there is no reason why this market won't keep battling higher.

For those seeking a major equity wave lower...it looks like its still some months away.