Even though the market got a little rattled after the FOMC minutes were released, the VIX still closed red. We can be clear about one thing right now...this market is still fearless.

Only with a move over VIX'20, can the bears start to look for significantly more 'interesting' things. 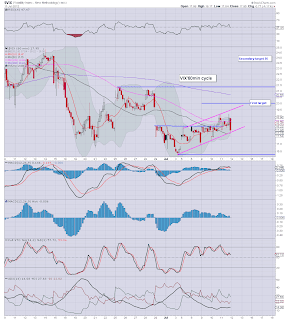 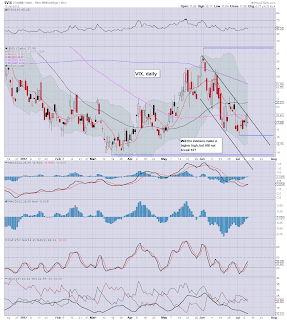 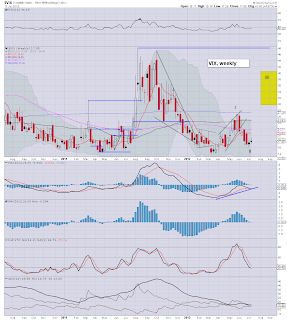 Many will be somewhat bemused at the VIX closing red, even though the indexes were pretty weak today. I'm not surprised though, there is still a bizarre lack of fear in this market, and I'm not entirely sure what might be necessary to get the VIX back into the 30s/40s - as I still expect.

As based from the weekly chart, I continue to look for a VIX explosion into the mid 30s within the next 3-5 weeks.

However, in teh immediate 3-5 day term, VIX could easily slip back into the 16s, not least if the indexes claw their way to around sp'1375/90.
Posted by Trading Sunset at 22:30:00
Email ThisBlogThis!Share to TwitterShare to FacebookShare to Pinterest

It appears that the floor was sp'1333.25, at least until tomorrow! Its a level that a fair few out there were noting in recent days, and its certainly at the key target zone I was looking for.

Bears failed to break and close decisively under 1330. That is not to say we can't just gap lower tomorrow morning, but...bears best chance was today..and they did not do it. 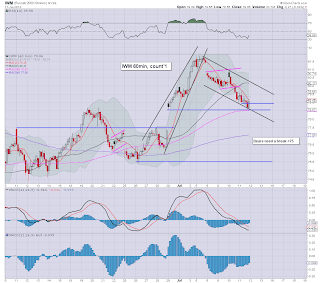 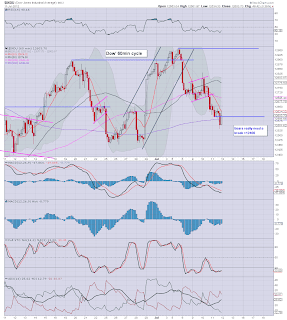 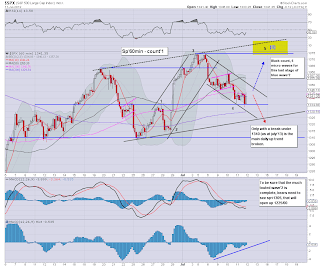 The closing hour micro-ramp was indeed something I had feared - even though we did see an initial sell off after the FOMC minutes. VIX confirmed the market recovery.

*as things currently stand, so long as we don't break 1330, I'm inclined to believe we see a multi-day bounce/final minor wave, up to 1375/90. I suppose that could take us into the middle of next week.

More across the evening
Posted by Trading Sunset at 21:02:00
Email ThisBlogThis!Share to TwitterShare to FacebookShare to Pinterest

3pm update - glad to be a spectator

As a permabear, I'm naturally inclined to be in a permanent state of 'shortness', but no..not today. Its actually quite nice to be watching this nonsense, with no real concern for which way Mr Market finally decides to take.

The initial fall looks significant to some...but not to me. Both micro 15/60 micro-cycles are looking low, this is not a good level to be short. 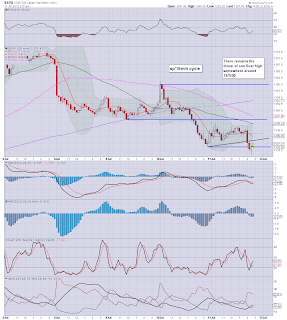 Looks like a floor to me on the cycle. 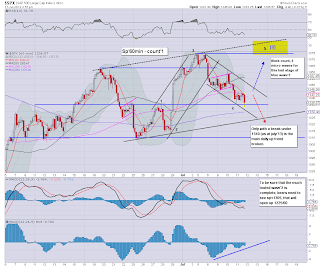 A fair few out there are getting mildly hysterical at the index declines since the Fed press release, the VIX remains barely green though. That is a pretty lousy reaction, and still warns of a fearless market.

As noted, I'm sitting this out until tomorrow. There is no hurry right now to get back on the short-train.

More after the close.
Posted by Trading Sunset at 19:52:00
Email ThisBlogThis!Share to TwitterShare to FacebookShare to Pinterest

Fed press release due at 2pm...could be a very choppy hour ahead, with the closing hour being important for both sides.

If those nasty HFT algo-bots can start some sort of short-stop reverse cascade UP, then...we may indeed get one final up move to around 1375/90

Regardless of any minor move higher in the next few days, it doesn't change the bigger picture outlook. 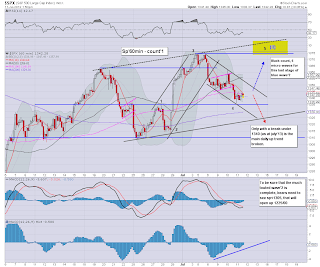 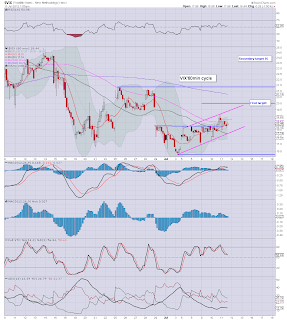 The underlying MACD cycle on the hourly charts is very likely floored. I suppose we could get one further down wave, but it'd be real surprising considering the fear-less mood out there today.

VIX is moderately red, sure it could close green, but I'm guessing..no.
--

I'm sitting this out until at least tomorrow.
Posted by Trading Sunset at 18:51:00
Email ThisBlogThis!Share to TwitterShare to FacebookShare to Pinterest

1pm update - waiting for the Fed

The Fed issue their press release at 2pm. Its merely a statement of the recent chatter they had. Doubtless, they'll be so pleased about their extension of op-twist, and will state they will do all necessary to ensure their mandates are fulfilled.

A market ramp to sp'1350s by the close? It would not surprise me, but then, neither would a break under 1330. On balance, I am glad to be merely a spectator this afternoon. 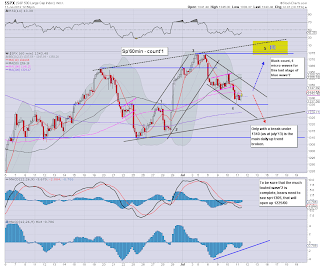 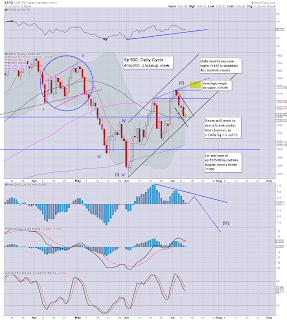 Hourly MACD cycle is looking floored, and it won't take much to get a bullish cross, and then 1350s are very viable within a few trading hours. That would open up sp'1375/90 within a few days.

Stay tuned.
Posted by Trading Sunset at 17:59:00
Email ThisBlogThis!Share to TwitterShare to FacebookShare to Pinterest

The big question remains..one more little up wave coming, or do we just break 1330..and keep on going? I sure don't know, no one does.

What I do know is that we do NOT yet have any decisive breaks through any of the key levels, including the VIX which is again red.

There remains a VERY real threat that Mr Market will ramp post-FOMC press release this afternoon. I sure won't be holding short ahead of that. 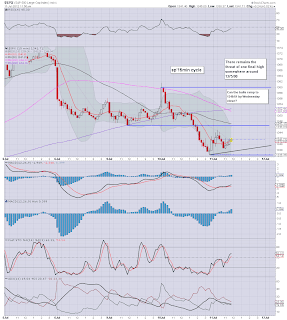 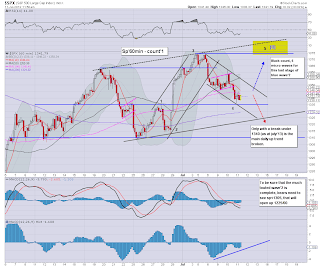 The hourly index cycles could just be another baby bear flag..or they could be suggestive of a floor. This is too hard to call, and plenty of others out there are touting 'one final high to come'. I'm inclined to go with that.

If we do get a ramp, bulls should seek a closing VIX -5% or so, and Sp'1349/51, something like that. Maybe we're looking at a peak on Friday, which could be 1380. That seems a fair way up from current levels, but..we've all seen this nonsense ramp up on the lamest of reasons.

Time for lunch.
--
Posted by Trading Sunset at 16:52:00
Email ThisBlogThis!Share to TwitterShare to FacebookShare to Pinterest

The smaller cycles continue to look a problem to the bears, and right now, I sense no fear in this market. All thats missing is for the algo-bots to launch a major bear stop sweep. 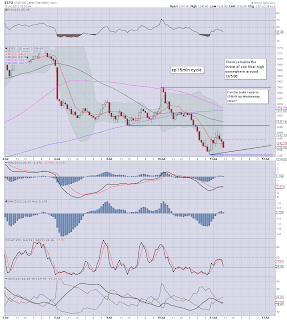 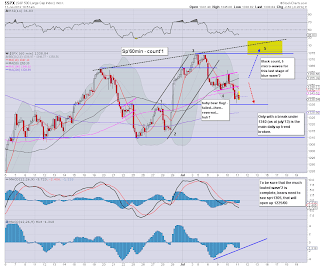 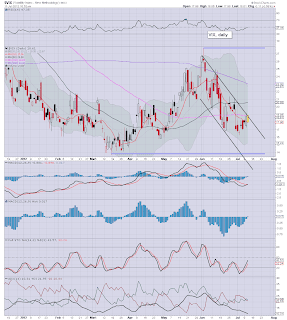 VIX remains in a clear downtrend, only a break above 19.50/20.00 would be a confident break higher.

There appears to be somewhat more of a threat of upside than downside right now. Call it a hunch -or 'vague guess', but I'd rather miss out on 10/15pts downside, than get whacked with a 35/45pts up move.
Posted by Trading Sunset at 15:54:00
Email ThisBlogThis!Share to TwitterShare to FacebookShare to Pinterest

With no significant gap lower this morning, I'm an edgy permabear. We are pretty low on all the micro-cycles, so..I'm out. 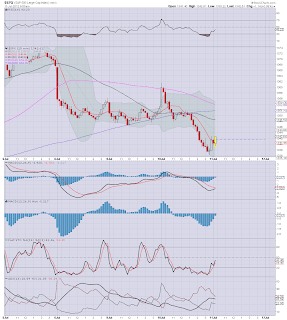 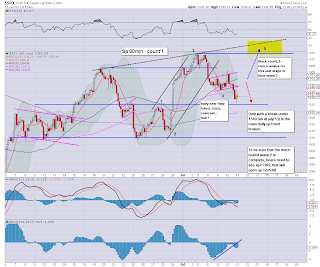 I've bailed on all my short positions at the open, I think its time to sit back for a few hours, and see how things go. I'm still bearish about the FOMC minutes to be released later, but still, as I type, I'm seeing the indexes show a minorsnap higher.

To be clear, I'm fine with the bigger picture, I just fear one final ramp higher, that might even put in a higher high of 1375/90.

more later....
Posted by Trading Sunset at 14:52:00
Email ThisBlogThis!Share to TwitterShare to FacebookShare to Pinterest

Good morning. Well, here we go again, futures flipped again from moderate overnight losses to moderate gains. Its pretty similar to yesterday so far. Right now the sp is set to open +2/3pts to around 1344.

Sp'1330 remains the key level to look for, to confirm a break of the bear flag/wave'2 that we are currently in. It is still entirely possible we'll bounce quite strongly off the 1330/35 level. 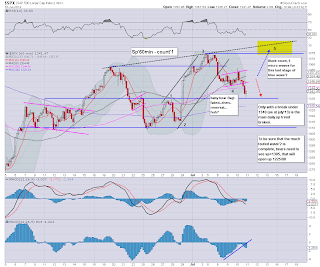 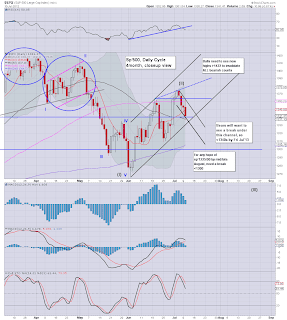 The daily MACD cycle is due to go negative late today or early tomorrow. So if the bulls are going to stall a decline to sp'1300 - by Friday, they'll need to ramp this market back upward from today. Even then, upside target would be no more than 1375/90 range.

The only main news today will be the release of FOMC minutes (2pm). I think that will likely annoy the QE-needy Mr Market. All we'll hear is 'we done QE, we'll remain open to further easing if necessary'. Market needs QE3 NOW, not next month, or next quarter.

I'm very inclined to believe there is a fair chance of a significant snap lower late this afternoon.

More across the day.
Posted by Trading Sunset at 13:29:00
Email ThisBlogThis!Share to TwitterShare to FacebookShare to Pinterest

B for Bernanke - holding to original outlook

When we finally rolled over in the US indexes in April, I was looking for a very simple, but straightforward target to be hit - the lower channel/wedge line, as seen on the monthly index charts. 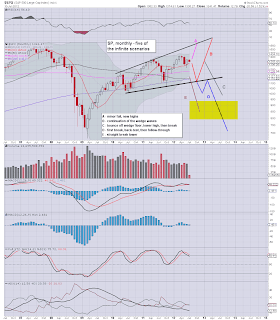 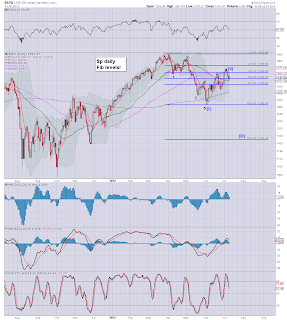 The above Fib' chart was inspired by Daneric  The basic premise remains that we are in a large bear flag ( a wave'2), and that when it does break - the current key level is 1330 (but rising each day), the downside target is significantly lower.

I hold to my original best guess of scenario 'B', as in Bernanke. However, there is a VERY dangerous issue - from the bearish outlook, in that we may floor around sp'1200. There is rising trend support from the 2009 low, all the way up to 1200 in the coming months.

The 'doomer bears', those looking for sp<1000 this autumn, will arguably need to see sp'1125/00 this August, just to have even a tiny hope of much deeper collapse levels in Oct/November. Anyway, first we need to decisively break the bear flag, and go sub'1300 again.

Today was a real trial to be part of, hopefully Wednesday will be somewhat less demanding.

After the opening moderate gap higher (above the bear flag on the hourly charts no less!), the market saw a swift reversal, and some reasonable declines to end the day.

Certainly, today was NOT a massive victory for the bears, but it was again some progress towards breaking what are giant bear flags on all the major indexes. 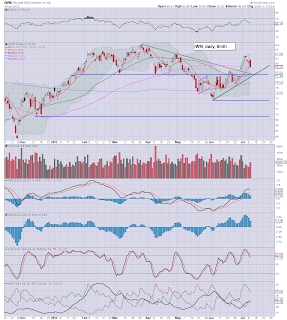 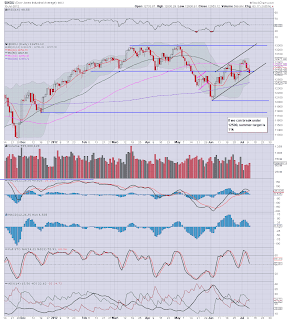 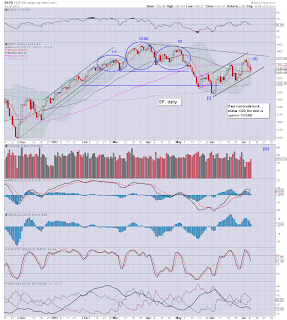 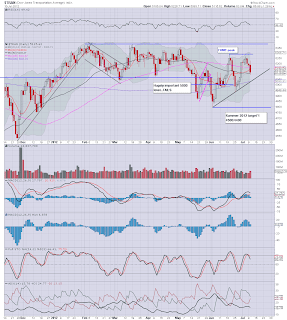 A pretty impressive bearish formation is clearly visible on all the daily index charts. We have a giant bear flag - the wave'2, and its just a matter of time before it breaks, and that will open the door to much lower levels.

However, there is still the small (and very annoying) possibility, that we will bounce off the lower channel line for one final minor wave up - which may or may not put in a slightly higher high >1374 - somewhere in the 1375/90 range. I really don't know, no one does of course.

What IS clear, a close below 1330 tomorrow, or any day after, will be VERY bearish, and will probably remove the threat of such a final minor wave higher.

The good bears need to be careful tomorrow morning if we gap lower to around 1330..and then reverse..hard.

The big 5k level looks set to be broken either tomorrow or Thursday. The channel floor is around 5025..so if we see <5000, then the tranny is warning that 'its over bulls, at least for a few weeks'.

Reading around, and talking with other traders today, it looks like many are agreed Sp'1225/00 seems a fairly reasonable target within the next 2-3 weeks. The next FOMC (urghh, yeah, that again) is August'1st, so if we're around 1200 at the end of July, I'll likely sit in cash until we see what the Bernanke has to say.