With the market reopened, it was a pretty muted day, despite somewhat reasonable trading volume, the VIX closed 4.4% higher, to close @ 18.60. The VIX is trying to confirm what appears to be a bull flag on the daily chart. First upside target would be 20/21. 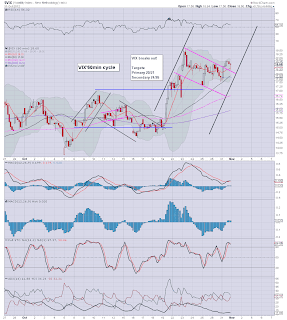 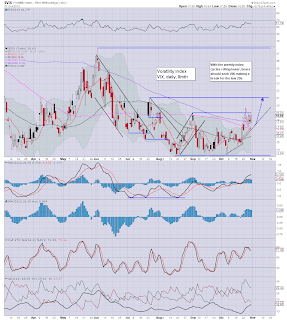 A relatively quiet day in market land, somewhat interesting that the VIX managed to at least close a little higher, but it was a small gain, and we're still not even above 20.

It would be VERY useful if we can close the week with VIX >20. That remains my third red flag.
-

More later.
Posted by Trading Sunset at 22:00:00
Email ThisBlogThis!Share to TwitterShare to FacebookShare to Pinterest

October comes to a somewhat muted end, we've been stuck in a very narrow trading range for almost five full trading days. The VIX closed 2/4% higher, but that move is inconclusive. 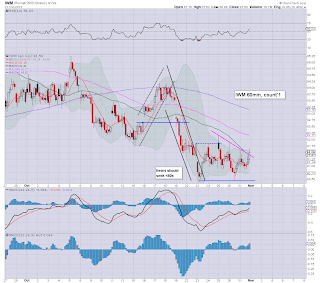 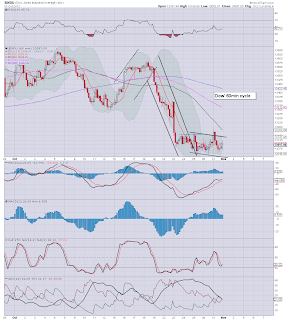 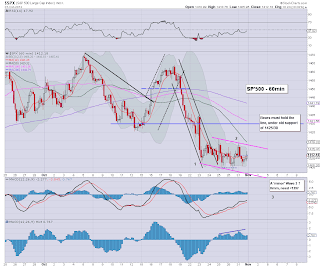 It is good that the market is back up and running, today was certainly another mixed mess, and Mr Market is still looking to pick its next direction.

What is clear - as I'll highlight later, the daily index charts have bear flags.

More later.
Posted by Trading Sunset at 20:02:00
Email ThisBlogThis!Share to TwitterShare to FacebookShare to Pinterest

Just one hour left of the trading day..and month. There will probably be a little more dynamic action this hour. The bears would do well to see a close at the low of the day, with VIX 19s. That seems a little on the doomy side though, I will admit. 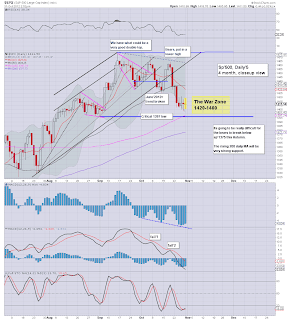 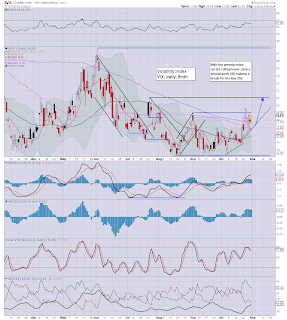 So, lets see if we see a little sell side volume in this closing hour. There is plenty of econ-data tomorrow, and with the ADP jobs (September numbers) being revised 50% lower, its not exactly the recovery that even the moderate bulls were hoping for.
--

*Later this evening, I will cover about how we closed the month.

More after the close.
Posted by Trading Sunset at 18:54:00
Email ThisBlogThis!Share to TwitterShare to FacebookShare to Pinterest

2pm update - this market is WEAK

The fourth day in a row where the market opens higher..only to again slip back into the red. Of course today is a real mixture of things, not least, since it is the end of the month. The VIX is continuing to show upside, a close in the 19s would be super bearish for the Thursday open. 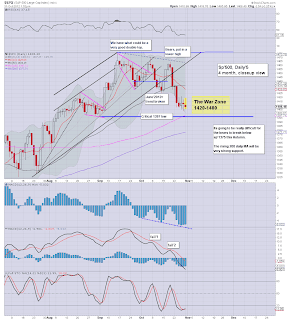 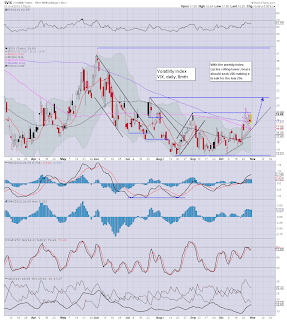 The bull flag on the VIX that I highlighted last week looks as though it is being provisionally confirmed. Only with a daily close >20/21 though, would I really be clear that the formation was correct.

The indexes look as though they will all close at least slightly red. With two hours to go of the trading day...and indeed month..lets see if some of the rats want to sell before its too late.

back at 3pm.
Posted by Trading Sunset at 17:53:00
Email ThisBlogThis!Share to TwitterShare to FacebookShare to Pinterest

For the fourth day in a row, the opening moderate gains have failed to hold, and the indexes have all switched to moderately lower. The tech' is weakest, not least due to AAPL which earlier briefly hit the 200 day MA @ 587. VIX is starting to show its underlying strength again. 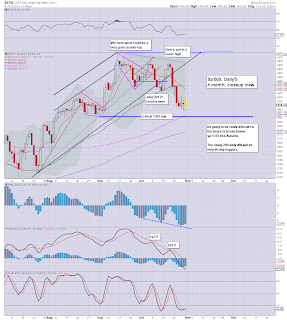 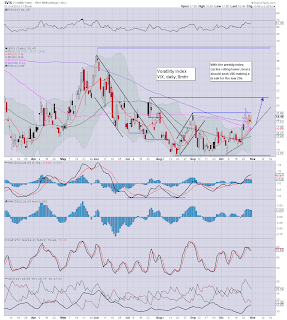 The market is looking weak. The daily chart is now sporting a pretty clear bear flag, and if we get a daily close <1397 tomorrow - or Friday, I will be targeting a fast move to the low 1300s early next week.

The VIX is starting to confirm the bull flag I was suggesting, first target remains 20/21 - which could be hit as early as tomorrow, and certainly by Friday.

Bears should seek at least a marginally lower index close, with VIX at least in the low 18s.

back at 2pm
Posted by Trading Sunset at 15:51:00
Email ThisBlogThis!Share to TwitterShare to FacebookShare to Pinterest

10am update - up and running

Good morning! The market is finally running again, and as I thought yesterday, it will likely be a very choppy and confusing day. A definitive trend won't likely be clear until tomorrow at least. 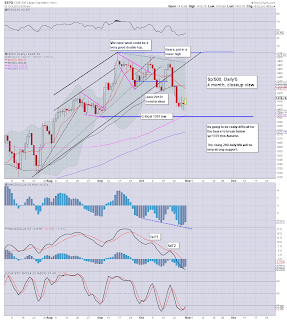 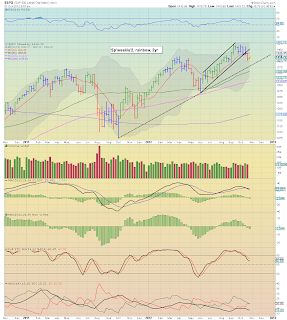 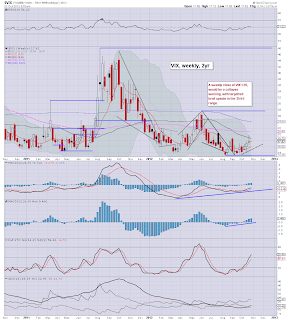 So...we're opening higher (especially on the transports) but its very likely to remain choppy.today.

There will be a lot of end-month book squaring to do, despite the open, its still very viable we can close red.

The VIX is just a touch lower, and certainly does not confirm/support the current index gains of 0.5%
-
It is somewhat disturbing to realise that tomorrow it will be November, and 2013 really won't be too far away!

back at 12pm
Posted by Trading Sunset at 13:55:00
Email ThisBlogThis!Share to TwitterShare to FacebookShare to Pinterest

Turn the machines back on!

With Sandy now fading away, its time to fire up the machines again, with the US markets all set to open this Wednesday morning. It is very likely to be a very mixed and confusing day, we probably won't have a clear direction of where we are broadly headed until late Thursday. 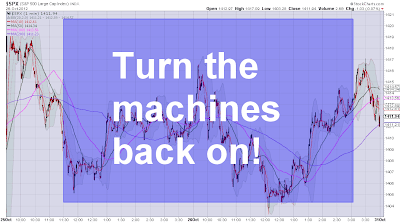 Lets take a quick overview of where we are... 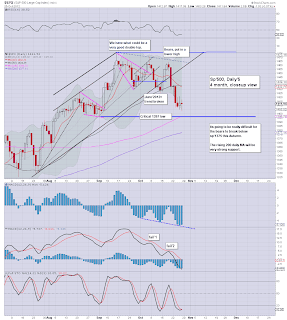 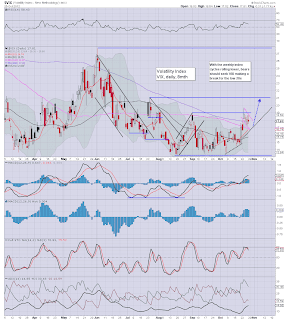 The smaller 15/60min' cycles on all the indexes are fully reset, and are arguably exhausted on the bullish side. The previous FOUR trading days saw many attempts by the bulls to rally, but all such moves have failed to hold.

The daily cycle is absolutely clear, the bears need a break under the Sept'3rd low of 1397.Bulls need a close in the mid 1430s, which would open a challenge of the QE3 spike high of 1474.

The VIX daily sure looks like a bull flag, with a very natural target of 20/21. Only if the indexes break secondary rising support @ 1375, can I see any hope of the more exciting secondary target zone of VIX 24/26.


Turn the machines back on!

It will be good to have everything up and running tomorrow, but for those bears looking for a significant red close, it will probably be a disappointing day.

We are due econ-data in the morning - Chicago PMI. Market is expecting 51.0 against a previous 49.7. So, anything still sub'50 would count as a real disappointment. All those who believe the US will slip into recession in either Q4, or early 2013 are going to need to see a PMI <50.

A few other issues to consider.

Yes, volume will be lighter in some respects due to some institutions being offline still, but it is the end of the month, and so there will surely be some counter aspect to seeing at least some trading activity as some square off their trading books.

Doubtless the cheer leading maniacs on the clown networks of CNBC and Bloomberg will be jumping up and down with their pom poms at 9.30am. On this occasion, I think I will almost be able to tolerate their exuberance.

Lets turn those machines back on!