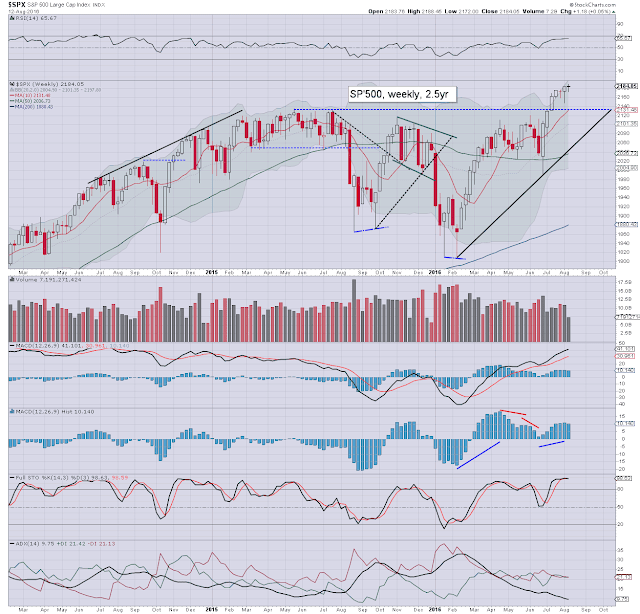 Best guess: a fair amount of summer chop, with upside to the 2225/50 zone by mid/late September. A pull back of around 4-5% then looks viable, but holding above the breakout level of 2134. A year end close in the 2300s is within range, especially if financials can rally ahead of a probable rate hike at the Dec' FOMC.

Equity bears have no realistic hope of significant/sustained downside in the near term.... barring a sporadic 'spooky news' event. Considering last August saw a major (if brief) upset, a repeat of that is highly unlikely. 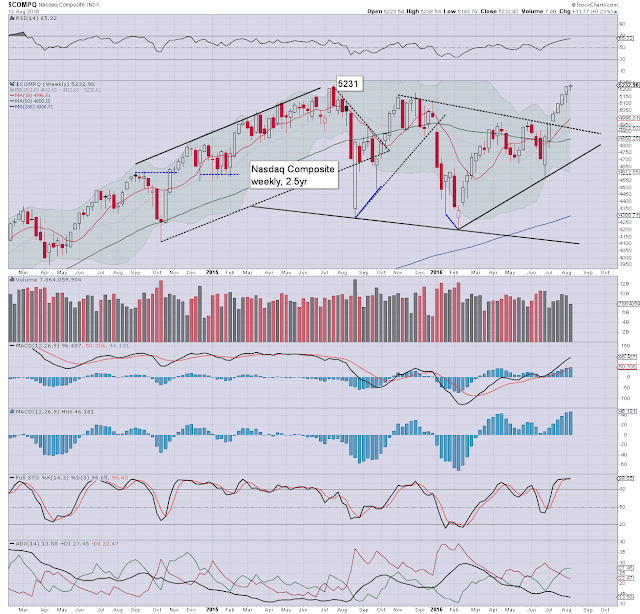 The Nasdaq climbed for a very impressive seventh consecutive week, settling +0.2% at 5232. With a new historic high of 5238, the Nasdaq has followed the SP & Dow. A monthly close in the 5300s looks due in Aug' or September. That should start to awaken mainstream chatter of an eventual push to the 6000s by late spring 2017. Core support is the giant psy' level of 5K. 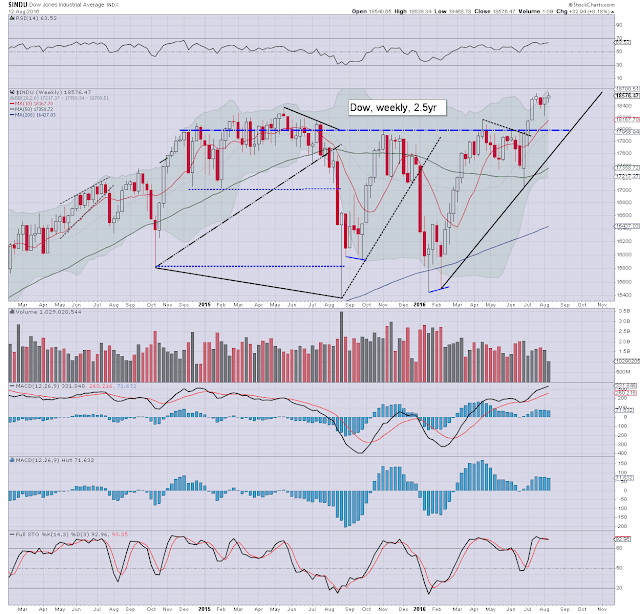 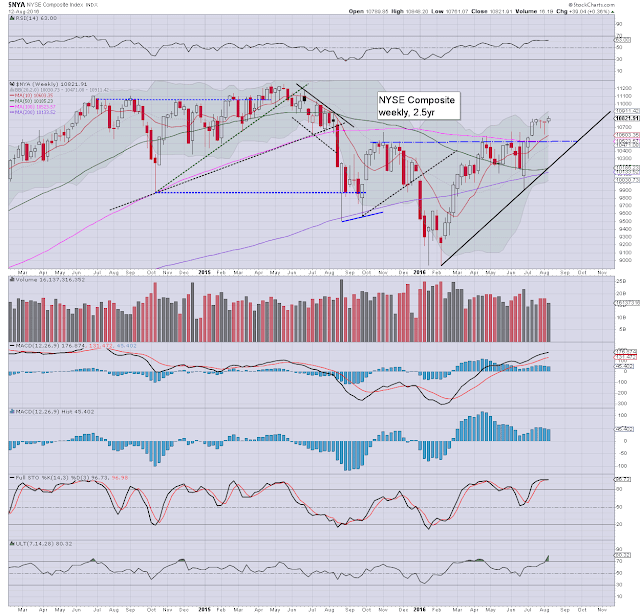 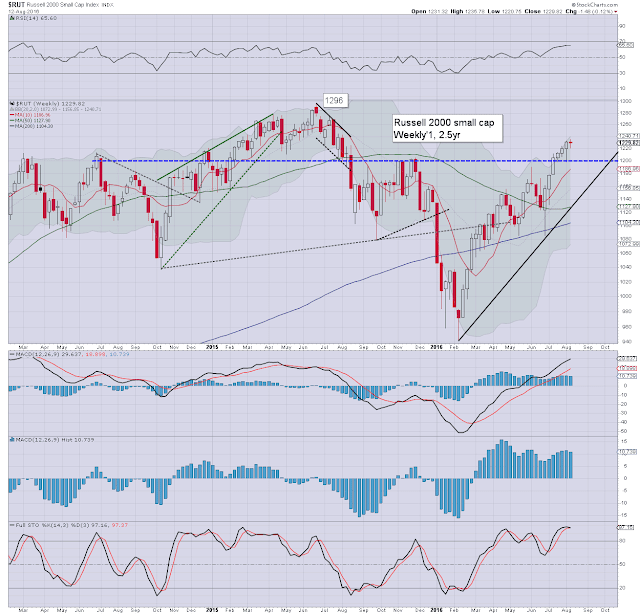 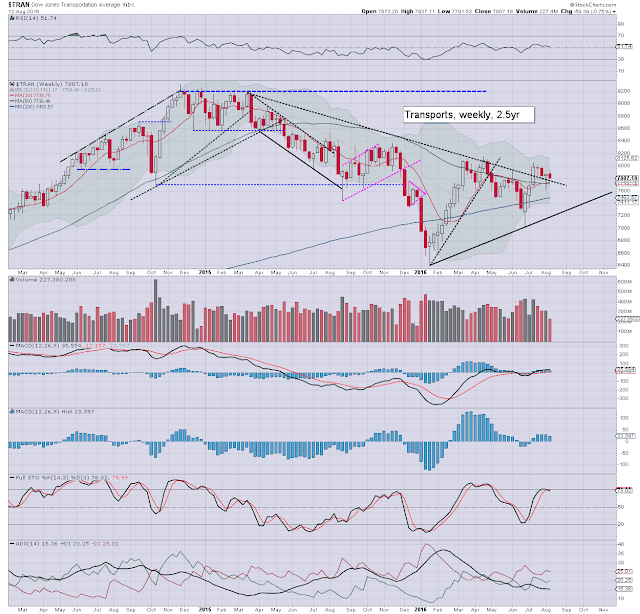 The R2K and NYSE comp' look set to follow, with new highs within 1-3 months. The Transports will likely take another 5-7 months to break a new historic high.

Equity bulls currently have 4-6% of downside buffer, before rising trend/support is broken.

A relatively quiet week is due. Other than CPI, the latest Fed minutes, and a few sporadic retail earnings, there really isn't much of significance.

*Fed officials Lockhart, Bullard, and Williams will be on the loose, and Mr Market will be listening for any talk about a possible rate hike in September.. or far more likely... December.
--


If you have valued my posts since 2012, you can support me via a subscription, which will give you access to my continuing intraday posts.

--
*the next post on this page will be Monday at 7pm EST
Posted by Trading Sunset at 17:00:00
Email ThisBlogThis!Share to TwitterShare to FacebookShare to Pinterest 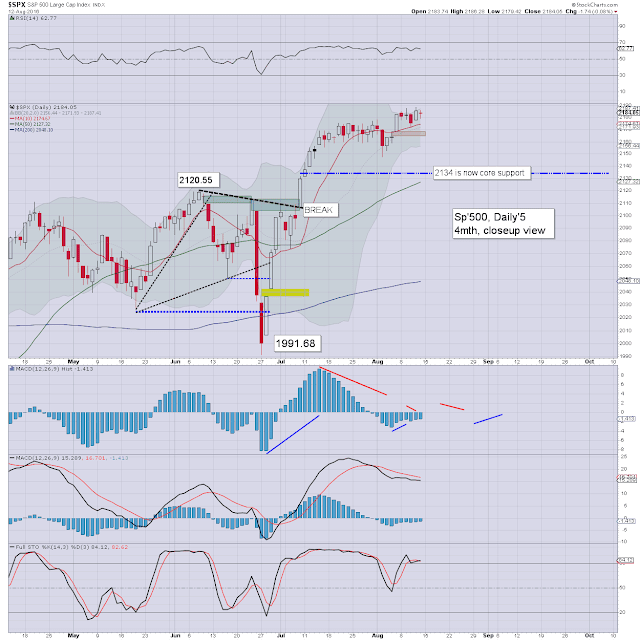 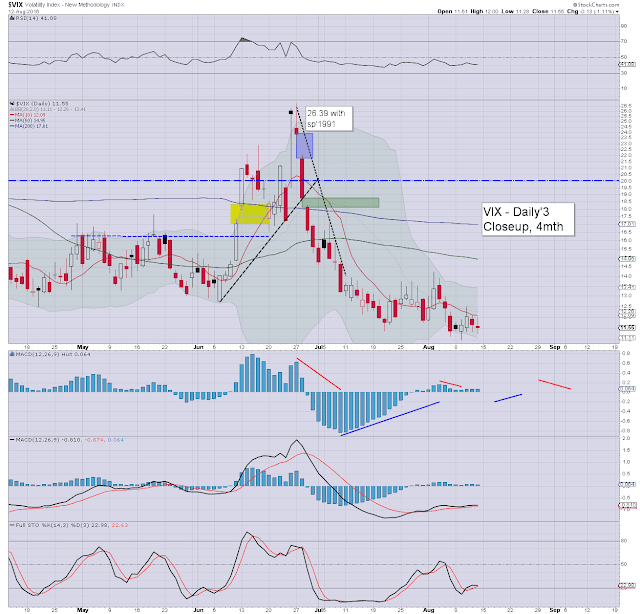 VIX was naturally cooling into the weekend

Broadly, having broken new historic highs for the sp'500, dow, and the Nasdaq comp', it was still another week for the equity bulls.

--
*the next post will be Sat' 12pm, and will detail the US weekly indexes
Posted by Trading Sunset at 00:00:00
Email ThisBlogThis!Share to TwitterShare to FacebookShare to Pinterest
Newer Posts Older Posts Home
Subscribe to: Posts (Atom)