Volatility higher on the week

The indexes closed largely flat this Friday. The VIX closed a touch lower, but across the week, the VIX did make net gains of just over 4%, to close @ 17.81. This remains a bizarrely low VIX, and a mini-surge into the low 20s seems very viable next week. 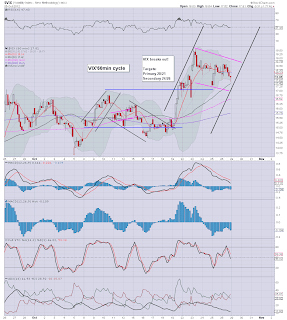 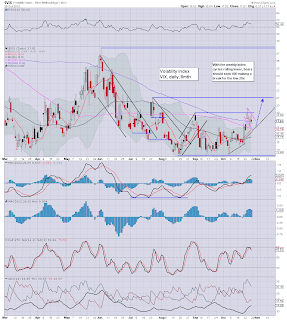 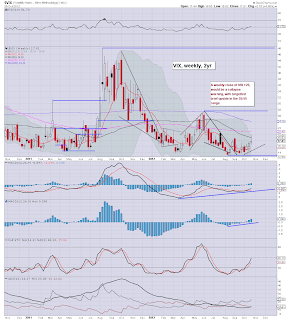 A somewhat muted end to the week for both the indexes and in terms of volatility itself.

The hourly cycle is fully reset, and we could easily open much higher on Monday - although that was also true for today.

The daily cycle is I believe a very important chart, and I think we have a very clear bullish flag, with a likely target of 20/21 early next week.

The bigger weekly cycle continues to battle higher, but so far, we're still not even over 20, which considering 'everything out there', is remarkably low.


More later.
Posted by Trading Sunset at 23:00:00
Email ThisBlogThis!Share to TwitterShare to FacebookShare to Pinterest

A choppy end to the week, with the main indexes closing largely flat, although the Rus'2000 was marginally red, with the transports moderately higher. 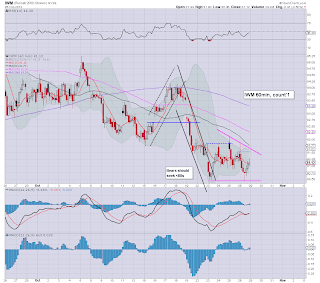 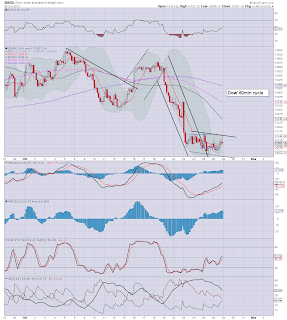 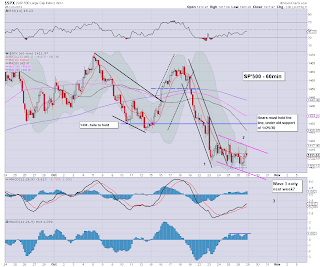 It was a long day..and a long week for many traders. The bulls ARE losing their grip, as best seen on the bigger weekly/monthly charts. The VIX remains very low, and I'm still waiting for a break above the big 20 level.

-
I am holding short across this weekend in late October. I remain trying to focus on the bigger picture, with those weekly cycles targeting sp'1325/00 within the near term. The VIX - especially on the hourly and weekly cycle charts is primed for a major leap upward, into the 24/26 area.
-

Have a good weekend
Posted by Trading Sunset at 21:01:00
Email ThisBlogThis!Share to TwitterShare to FacebookShare to Pinterest

3pm update - closing into the weekend

The week has been one where the bears have fought hard to hold onto their moderate declines. It would appear the bulls are losing their grip, as especially seen on the bigger weekly index cycles. 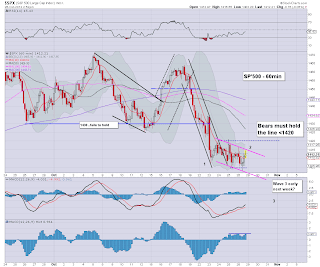 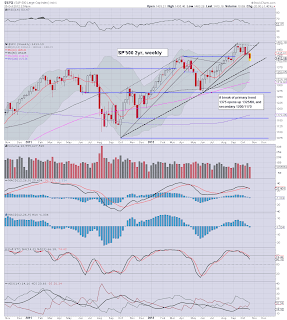 I've added a vague guess at what might be a valid count. Is this a particularly weak wave'2 /bear flag, that is so weak, its still trending lower?

I don't expect much this closing hour, least of all for the bulls who have spent the past 4 trading sessions (since the big gap lower on Tuesday) trying to rally back..failing EVERY time.

back after the close
Posted by Trading Sunset at 19:55:00
Email ThisBlogThis!Share to TwitterShare to FacebookShare to Pinterest

Mr Market is still lost, trying to find an excuse to ramp hard...but it can't find it, at least not yet. The VIX is flat, and with two hours to go, its difficult to see anything other than a lacklustre close. 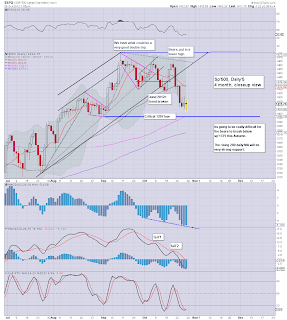 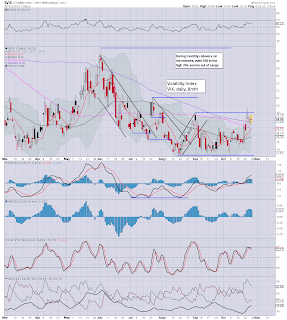 So again the question is 'who wants to go long into a late October weekend?'
--

I remain short, and will hold across the weekend. The weekly charts suggest must lower levels in this current cycle.

back at 3pm
Posted by Trading Sunset at 18:58:00
Email ThisBlogThis!Share to TwitterShare to FacebookShare to Pinterest

What to say? Hmm, its a mess, market still trying to find direction. VIX is largely flat, indexes are a touch lower. 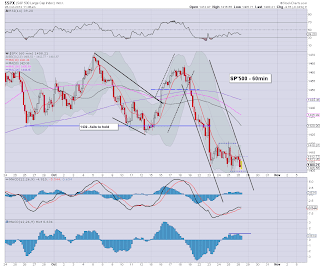 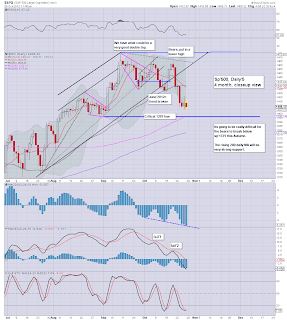 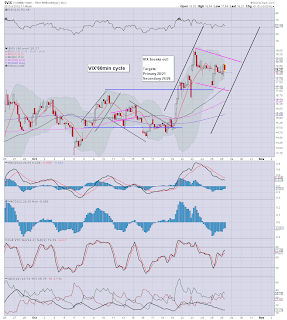 I am trying.vainly to ignore the intra-day noise, and focus on the bigger weekly cycle charts that still suggest 1325/00 within the near term.
--

How we close today will be critical, but then...isn't that always the case?

back at 2pm
Posted by Trading Sunset at 16:47:00
Email ThisBlogThis!Share to TwitterShare to FacebookShare to Pinterest

Overnight futures were somewhat weak, earlier lows were sp-13pts, which just about would open us at the big 1400 level.

Q3 GDP: 2.0%, which seems bizarrely high. I can only guess it'll be later revised 'significantly' lower. As they say..'lies, damned lies..and statistics.' 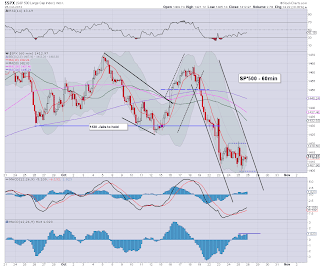 So, GDP is a touch better than expected. I'm surprised at the 2.0%, doesn't make much sense considering the other data-points which are worse now than late Spring.

Indexes are now all back to flat. So much for the overnight futures.

Once again, it was all a complete waste of time.
Posted by Trading Sunset at 13:35:00
Email ThisBlogThis!Share to TwitterShare to FacebookShare to Pinterest

Red into the weekend?

Today saw the bulls begin another early morning lurch higher, but it failed. It is this second failure in a row that I find particularly bearish. With the VIX hourly chart offering big upside this Friday, and into next week, things could be about to get real exciting. 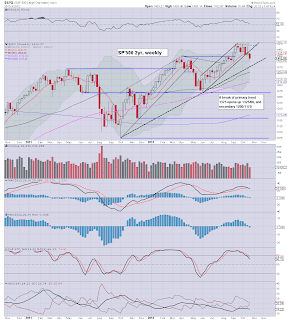 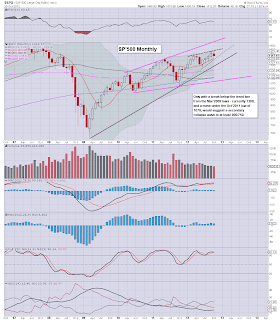 First, a brief note on AAPL/AMZN.

AAPL is still immensely profitable, but clearly its a little concerned about early 2013. In AH trading, it broke the monthly 10MA, hitting 585 - suggesting a move to $500 in the next month or two.

So far the decline from 1474 to 1412 is still a tiny move of barely 4%. All those bull maniacs calling this decline 'significant'..have clearly lost any sense of perspective.

Certainly, the low 1200s would make for a very tasty 'dip buying' level, even for those permabears out there, including yours truly! Right now, even a move to the low 1300s would seem out of range to most traders, but hey...we've seen a few 'surprise' major declines over the last few years. We're due another one.

As for Friday, we have Q3 GDP data before the open, a number <1.5% should be enough to cause at least some market concern. The consensus estimate is for 1.9%, which seems bizarre, especially when you consider the earnings reports in recent days.

It will also be interesting to see how AAPL and AMZN trade across Friday. Considering their respective results - and AH price action, I'd look for them both to at least close moderately lower.

The main indexes closed slightly higher, but it remains important to note that the early morning rally entirely failed to hold, with the market even going briefly negative. Despite the closing hour mini-rally, the daily near term trend remains downward. 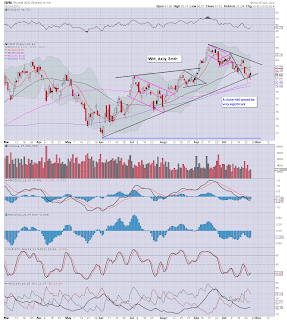 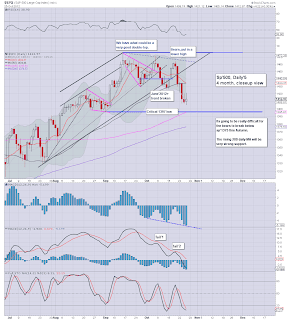 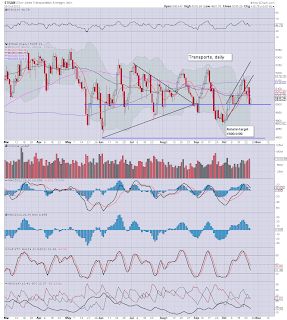 I suppose some bears can feel a little disappointed with the closing levels. After the early morning rally failed, and with the market red, the door was open to breaking much lower...but no. The bears did not have the energy to break lower today. Perhaps tomorrow.

The underlying daily MACD (blue bar histogram) cycles are very low, and there is now the persistent threat of a major jump to the upside on any 'excuse'. At the moment, considering the VIX is still not even 20, I'm not too concerned though.

Transports remains trading in its own little world. I'd certainly like to see it close the month <5000, to maintain a generally bearish trend on the monthly charts.
-

I remain short, seeking an exit on a major down day, preferably somewhere around sp'1375, with VIX 20/21. With the weekly charts suggesting a target of 1325/00 as viable within the next week or so, I am reasonably confident of an exciting end to October.