US equity indexes saw a week of rather dynamic swings. Net weekly gains ranged from 0.8% (Trans), 0.5% (R2K), to 0.1% (Nasdaq comp'). Near term outlook offers threat of some moderate gains/chop into Aug' opex, but then very sig' downside into Sept'. 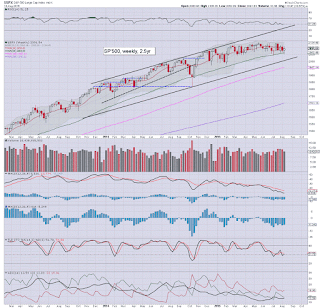 First key support is the giant 2000 threshold. In terms of upside, there are multiple aspects of resistance in the 2130s. Best case for the bulls appears to be a brief break to 2110/20s... new historic highs look out of range.

Best guess... renewed downside to the sp'2040s in the near term... a moderate bounce, and then the 2000 threshold being broken in late Aug/early Sept'. 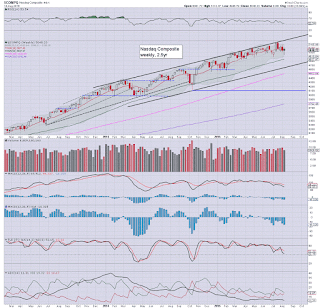 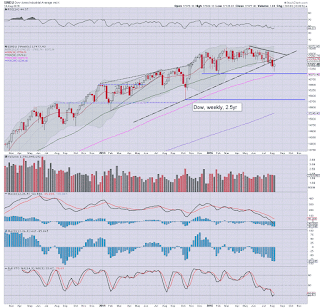 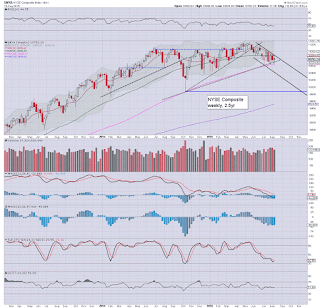 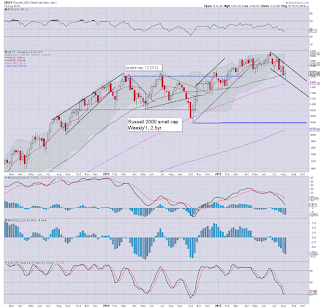 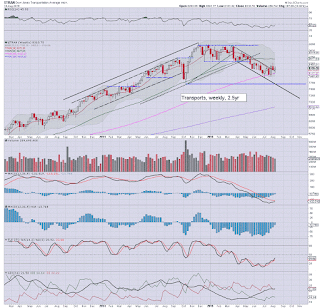 The 'old leader' saw the strongest bounce this week, settling +0.8% @ 8318. With the recent downtrend broken above, there is threat of another week or two higher. Regardless, the Oct' low of 7700 looks a very reasonable target by mid Sept'. The bigger monthly cycle is offering the 7200/7000 zone by early Oct'

So.. net weekly gains for all the indexes, having battled higher from the Wednesday morning low. Yet, the closing weekly candles aren't particularly bullish. Indeed, most indexes merely saw yet another lower high and lower low.

Regardless of any moderate upside into the coming OPEX, it seems highly unlikely any of the indexes can break new highs in the near/mid term.

Broadly, all indexes look set to fall at least 5-7% between now and late September. However, if we're in some sort of 'intermediate' correction, then we'll soon break much lower... at a rather accelerated rate.

Best case for the equity bears is a test of the Oct'2014 low in the low sp'1800s. From a time perspective, the window of opportunity will likely close in the first week of October - which tends to be a seasonal low.

Much like the past week, there really isn't much in the way of scheduled data.


Back in the trenches

Yours truly has once again been too early on a market re-short. Having bailed (perfectly, I dare say) from VIX 16.20, I'm now underwater as the VIX is back in the 12s. As things are, I can cope with holding into Aug' opex, and beyond.

From a pure technical/cyclical perspective, price momentum increasingly favours the equity bears. As we move into late August/early Sept', I would imagine we'll be seeing stronger and more sustained downside, with VIX breaking into the low 20s.

What does concern me...  those equity bears who are not mindful that once we move into Oct', the market will be highly prone to a very strong up wave.. one which could last a full two years. I try never to 'suggest' anything here... but on this occasion I will conclude with this... 'for gods sake use trading stops... and don't speculate on margin!'

Whilst equities saw a moderate net weekly gain of 14pts (0.7%) at sp'2091, on the bigger scale, we have a rather clear rounded top.. having peaked at sp'2134 in May. A break under the key psychological threshold of sp'2000 looks due, from there.... things should get real interesting. 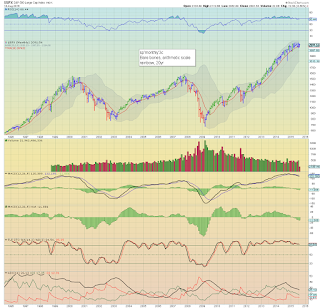 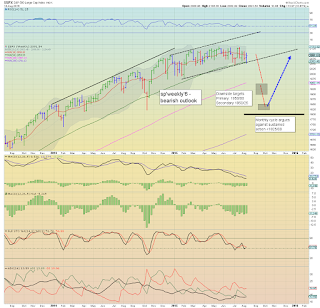 *a blue candle on the 'rainbow' weekly cycle. It is notable that on Monday it was green... but flipped to red Tue/Wed.
--

I remain looking for some significant weakness into September... and perhaps some of October, but broadly.. I am seeking renewed upside into next year. 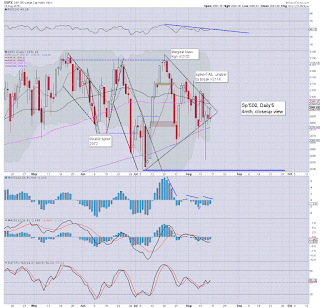 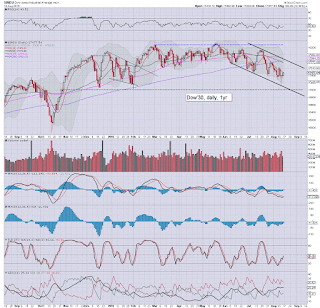 Despite a net daily gain to end the week, it remains a series of lower highs and lower lows since most indexes peaked in mid May.

Renewed downside looks due next week.
--