The morning reversal seen in the equity market was eventually reflected in a VIX around 7% higher. However, with a little bounce into the close, and HPQ earnings AH, the VIX lost half the gains, settling +3.4% @ 13.82. Near term trend is offering another few days higher, 15/16s. 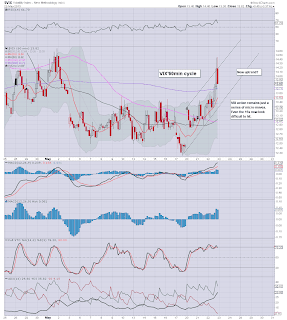 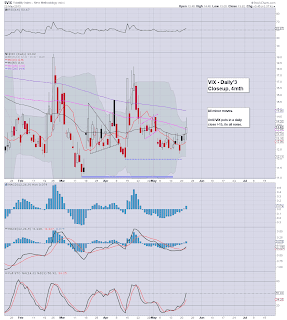 It does look like we are in a new up trend on the VIX, but with QE continuing, the eventual spike high won't like be much above 15/16.

On no reasonable outlook can I see VIX in the 20s..for some months.
--


Posted by Trading Sunset at 23:00:00
Email ThisBlogThis!Share to TwitterShare to FacebookShare to Pinterest

A classic reversal day, and the first significant down day in over four weeks. Most indexes declined between 0.5-1.0%, with the Trans and R2K both falling 1.6%. Daily charts are warning of downside into the Memorial day holiday weekend. VIX confirmed today's equity reversal. 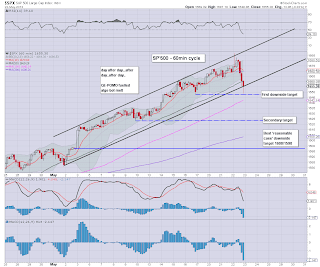 Well, finally bears have something to be pleased about, although sp'1650s are obviously nothing to get too excited about.

A reversal day is a powerful and important day to recognise. Arguably, we now have a confirmed turn day, and now the issue is how many down days will follow. I'd have to guess it will be safe for the bears until the Friday close, but next week is another matter entirely.

There is huge QE to end May, and that will very likely at least keep the market from falling under the 1600 level.
--

*I am on the sidelines overnight, but will seek an index re-short on Thursday. With QE of 3bn, there is very significant risk of an 1% morning gap/ramp, but considering today's reversal, I'd have to guess it will similarly fail.
--

the usual bits and pieces across the evening
Posted by Trading Sunset at 21:01:00
Email ThisBlogThis!Share to TwitterShare to FacebookShare to Pinterest

A rather classic reversal day, and we've even seen the market break into the sp'1650s, with VIX 14s. Precious metals are seeing rather sharp declines after earlier massive gains, Oil is similarly weak, -1.9%. 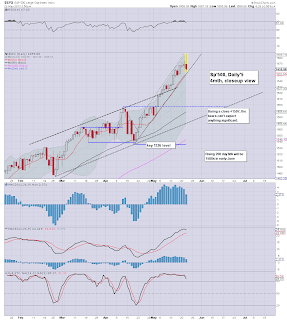 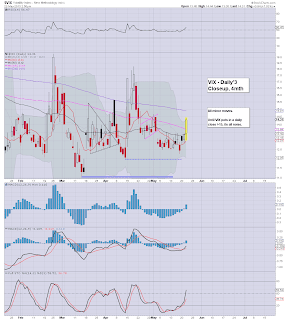 Well, for those who bravely shorted the Bernanke spike, today has turned out to be the best day since mid April. Congrats to those who did!
--

*I am back on the sidelines after exiting an IWM - short index, position.

Will see to re-short later tomorrow, AFTER the QE-pomo of 3bn has filtered through.
--


3.24pm..ohh the humanity..the clowns on finance TV are looking a little concerned. After all, gods forbid the market close down 1%.

Perhaps someone should request an emergency QE-pomo before the market closes?

It does appear we have a classic reversal day, inspired no less than the Bernanke. The main indexes are now moderately lower, lead by the Trans/R2K. VIX looks like a close in the 14s is viable, with the low sp'1660s. Anything in the 1650s would be a real bonus to those shorting today's spike high. 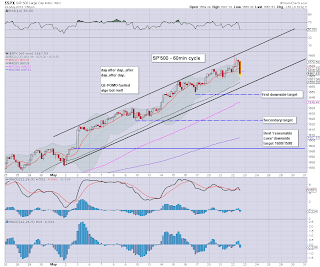 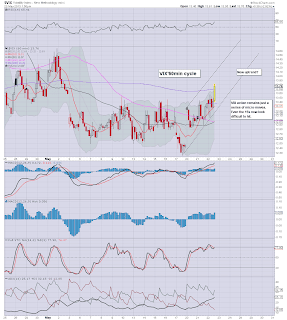 Today is playing out rather well.

*I am short IWM, and will consider an exit near the close. I remain VERY focused on the fact that QE is continuing..and there is a mid-sized POMO of 3bn tomorrow morning.
--

*I've placed a tight stop on my IWM index short position, its a huge gain, and I won't see that eroded.

Will look for an index re-short, AFTER tomorrows POMO has filtered through, probably sometime after 11am..possibly 2.30pm

2.30pm... daily charts are now looking pretty good for the bears into the Friday close.

The big issue, is just how high can the VIX spike in this retracement? 16s won't be easy.
Posted by Trading Sunset at 18:52:00
Email ThisBlogThis!Share to TwitterShare to FacebookShare to Pinterest

Whilst the main indexes are battling it out to hold moderate gains, the VIX is continuing to tick higher on the daily chart. Those bears seeking a reversal day on the indexes, should similarly be seeking a daily VIX close in the low 14s. That would open up the 15/16s by the Friday close. 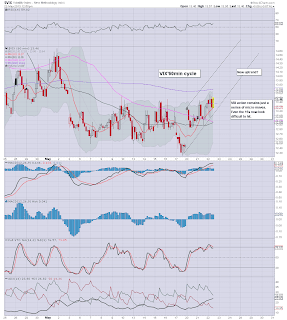 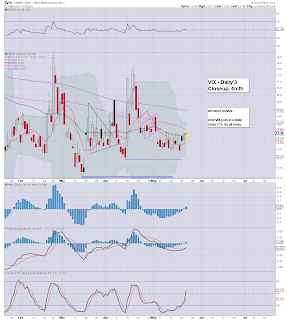 I will say, it sure won't be easy for those in bear land, but if sp' can close at least in the low 1670s, that opens up the 1660s tomorrow...with a moderate hope of lower still after the long weekend.

The turbulence in the metals..and Oil this morning are testament to a market that is getting...twitchy. We should (in theory) see the VIX start to increase.

Hourly index charts look primed for a rollover into the close. So..the setup IS there, now its just a case of whether Mr Market wants to play along.

*I remain short the indexes, via IWM.

Its starting to look reasonably good into the close. With 2.5hrs left, bears need to seize the window of opportunity, and close in the 1660s.
Posted by Trading Sunset at 17:55:00
Email ThisBlogThis!Share to TwitterShare to FacebookShare to Pinterest

The morning has seen some pretty strong swings, and with the Bernanke concluding, the market is back on another micro upswing. The obvious question is will this be a reversal day, as a fair few have been seeking? What is important..is how we close, bears need <1670. 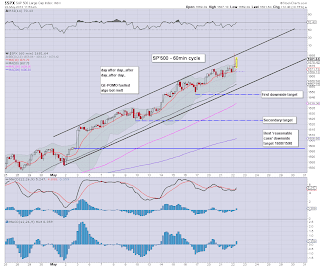 Metals remain massively below their earlier highs, and both actually went red. Despite the main indexes rallying back, Oil is still -1% 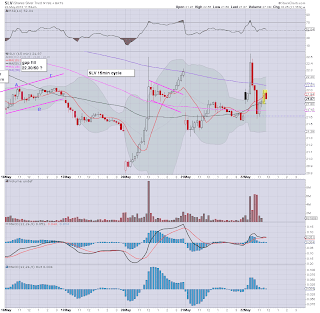 Pretty wild in the metals, even going red before 11am

--
*I am short IWM, the latest little micro-bounce..is annoying..but nothing too bad yet

Best case downside close for the bears.. sp'1665/60.   1650s look out of range today.
--
Posted by Trading Sunset at 16:56:00
Email ThisBlogThis!Share to TwitterShare to FacebookShare to Pinterest

11am update - its getting a little wild

We've seen a rather big market ramp on the latest Bernanke statement..yet..all is not very stable in market land. The metals which soared..have no dropped almost all their gains, and the indexes are looking VERY spiky on the hourly charts. 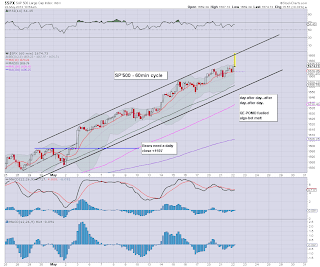 I think today is a reversal day. Opening jump higher..but then a major swing...and a red close.

Its a been a long whilst since we've seen such a day...but the signs are everywhere, including Oil..which snapped lower, bounced..but is now on the slide again.

I think we have a reasonable chance of falling into the memorial day weekend.

Bears should keep in mind there is a mid-sized pomo Thursday, so even if we close in the red today..and open down on Thursday..there is a VERY significant chance of a Thursday bounce.
- 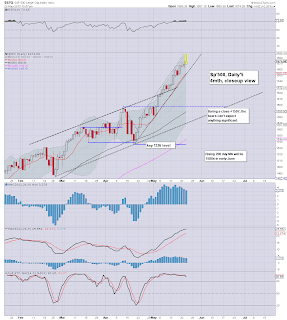 A daily close under that..will open up the much anticipated retracement..down to around 1600/1590s.


UPDATE 11.20am... a micro-bounce, but the 15/60min cycles look good for latter day downside..and the daily VIX cycle IS ticking higher.

This could be an interesting remainder of the week, but as noted...bears must beware of the Thursday mid-size POMO.
Posted by Trading Sunset at 15:56:00
Email ThisBlogThis!Share to TwitterShare to FacebookShare to Pinterest

10am update - here comes the Bernanke

The main indexes are moderately higher, and we're challenging yesterdays new high of sp'1674. Oil snapped lower as the market opened, -1.5%. Metals are holding onto their opening gains. More importantly though...the Bernanke is due to speak. 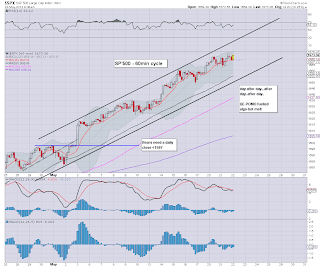 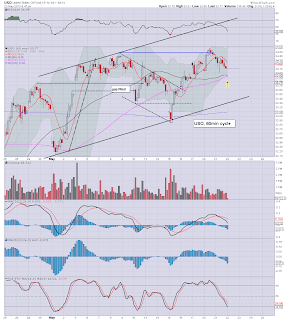 Frankly, I think this morning is a treacherous time to trade.

Metals soaring..Oil...recovering from an earlier 1.5% snap.

Its pretty wild out there!  Too wild for me, I ain't getting involved.
--
Posted by Trading Sunset at 14:50:00
Email ThisBlogThis!Share to TwitterShare to FacebookShare to Pinterest

Good morning. Futures are a touch higher, sp+3pts, we're set to open around 1672. Precious metals are showing significant gains, with Gold +$16, Silver +40 cents. Oil is fractionally lower, ahead of the EIA report. The Bernanke will be getting blanket TV coverage from 10am. 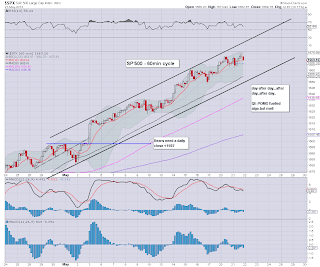 First support for the bulls is the obvious lower channel area of 1655/50. I can't see that being broken today, very unlikely.

Yet..today is Bernanke day. At 10am, the chairman talks to US congress for the morning, about the state of the US economy.

If there is one person who can get a down cycle going whilst talking to politicians, it is the Bernanke. It feels likes years since we've last seen the market unravel 1% in the space of an hour - as Benny talks, but..you never know.

The daily cycles are clearly 'tired', and the VIX daily cycle is ticking upward...so lets see how this morning goes!
--

*I am reluctant to meddle in indexes, not least on the short side. I will remain mildly interested in taking a new Oil or SLV long later today..or more likely early Thursday.
--

Video bonus from Ron Walker, thanks to poster 'callgary' for noticing!


..waiting for Benny
Posted by Trading Sunset at 13:28:00
Email ThisBlogThis!Share to TwitterShare to FacebookShare to Pinterest

The main indexes are looking tired. Certainly, they remain within accelerated up channels, and there is nothing bearish yet. Are we looking at a holiday reversal? Near term downside - based on basic Fibonacci for the current wave, would suggest no lower than 1600/1590. 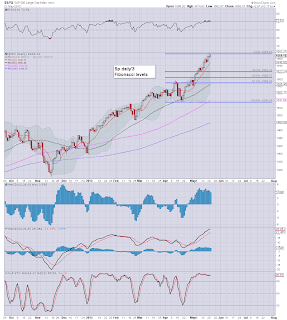 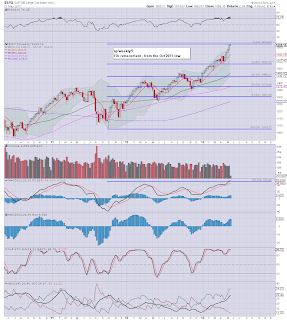 Daily fib' chart is certainly offering sp'1600/1590s, but that looks so difficult. That's around 4% lower, and even the 'big' April move was of that size.

The bigger weekly charts highlight that the lower bollinger band is now up to 1563. By the end of next week, it'll be pretty close to 1600.

There is simply very little hope of a retracement any lower than 1600, and I'd have to guess the market would just rally right back up from there anyway.

At 10am the Fed chairman is due to talk to the US congress about the US economy, its the six-monthly event I believe. No doubt, that will get blanket coverage on the clown finance TV networks all morning.

What will the market make of it? An excuse to sell into a long 3 day weekend? Perhaps, the only problem - as ever, for the bears is that Thursday is a mid-sized POMO. I realise, the selling could overcome such a QE prop', but still...it won't be easy, even to break back into the sp'1650s.

As for anything lower, that looks awfully difficult.
---

*as ever, I do appreciate the comments, and I'm trying...as best I can, to add something 'useful' to the wider chartists community.

That's all for today....goodnight from London
Posted by Trading Sunset at 04:00:00
Email ThisBlogThis!Share to TwitterShare to FacebookShare to Pinterest

The main indexes closed a little higher, but there was some distinct weakness in the closing hour. The sp'500 managed almost another 3pts higher, to settle @ 1669 - after an earlier high of 1674. Near term is still within an accelerated upward channel...but its looking tired. 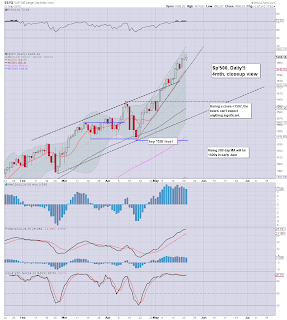 Suffice to say, things are looking 'tired' as we are approaching a 3 day (next Monday is closed for Memorial day) holiday weekend.
--

Underlying MACD (blue bar histogram) cycle actually ticked lower for a second consecutive day, although we're still very high in positive territory. Its going to take a break of the channel to have any chance of just going negative cycle.

Right now, the very best bearish case is for sp'1640/35 by the Friday close, but frankly, I find that hard to envision.

We have another mid-sized POMO on Thursday. Which direction do you think the market will be going then?
--