VIX lower for a fifth day

With equities closing higher for the fifth day of six, the VIX settled lower for the fifth consecutive day, -8.5% @ 12.11 (intra low 11.87). Near term outlook offers an equity retrace to the 2090/80 zone, which should equate to VIX briefly in the 15s, 16s look increasingly difficult. 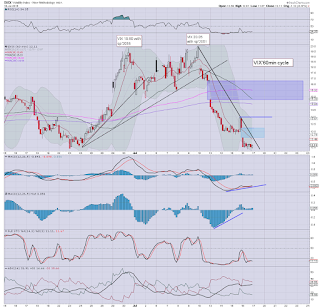 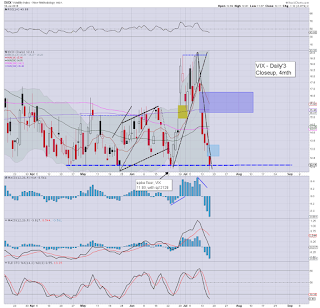 Pretty incredible to see the VIX having been crushed from a high of 20.05 last Thursday afternoon, to the 11s.

This market sure can get super complacent extremely quickly.

US equities closed broadly higher, sp +16pts @ 2124. The two leaders - Trans/R2K, settled higher by 0.2% and 0.7% respectively. Near term outlook offers a retrace to the 2095/90 zone, with the micro gap around 2080 looking somewhat difficult. Broader upside into early August remains probable. 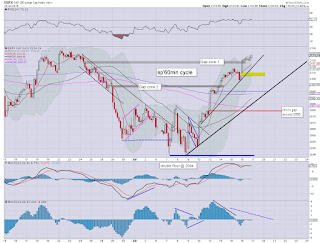 *closing hour, a lot of minor chop, but with a fractional new cycle high.
--

Well, despite the market having closed, the Yellen continues, and will probably last another hour.

Interesting to hear Yellen claim Fed policy is not beholden to the equity market, yeah.. sure.
-

Price structure is not offering the equity bears anything much for tomorrow. Market looks set to close the week above the 2100 threshold, and that bodes well for broad upside into early August.

3pm update - the closing hour, minus the Greeks 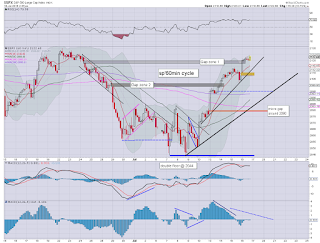 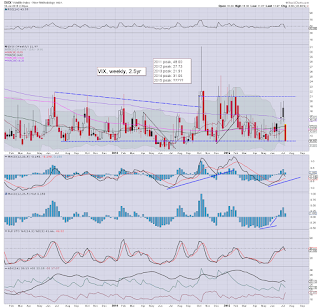 Well, unlike yesterday, there are no Greeks on the rampage, and the market looks set to comfortably close in the 2115/25 zone.

With things as they are.. its not a setup that particularly favours the bears tomorrow.

*I remain holding a small VIX-long position. I suppose things could be worse, I could have been heavy short NFLX.
-

Unless Yellen says something stupid about interest rates...  I will merely be back at the close.
Posted by Trading Sunset at 19:49:00
Email ThisBlogThis!Share to TwitterShare to FacebookShare to Pinterest

Fed Chair Yellen is set to reel off yesterday's opening remarks again, this time to the US Senate. A Q & A will follow, and will likely stretch beyond the market close. Hourly equity/VIX cycles are offering weakness into the close, but chances of more rowdy Greeks.... low. 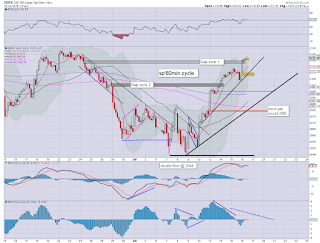 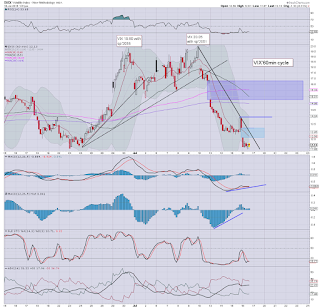 *Yellen is due at 2.30pm... I'd guess clown finance TV will cut away before the market close, but Mr Market will certainly be listening for any comments on interest rates.
--

Price structure on the equity hourly cycle is arguably a flat top, and bears need a daily close <2115 to offer any hope that the week will end on a negative note.

Maybe Yellen will say something stupid about rates and annoy the market?
-

notable weakness: coal miners, BTU -7.2%... as the sector continues to be destroyed. 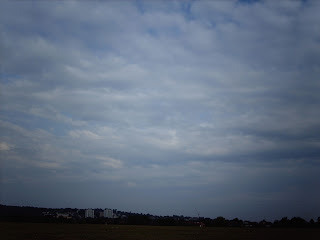 I suppose the skies are marginally more bearish than bullish.
Posted by Trading Sunset at 18:54:00
Email ThisBlogThis!Share to TwitterShare to FacebookShare to Pinterest

US equities are set for increasing minor chop, ahead of the Yellen, who is due to spout more fedspeak, this time to the US senate. Equity bears should be desperate to break back under soft rising trend - which at the close will be around sp'2114. 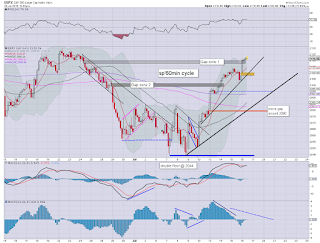 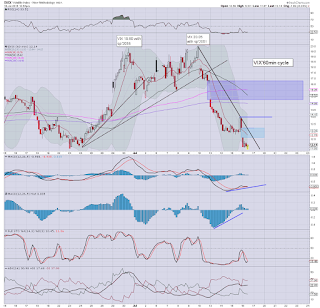 back at 2pm
Posted by Trading Sunset at 17:55:00
Email ThisBlogThis!Share to TwitterShare to FacebookShare to Pinterest 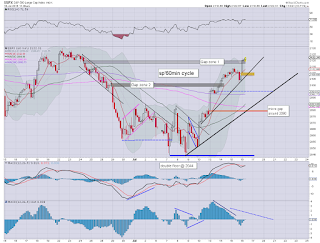 There really isn't any resistance until the historic high of 2134.. after that... monthly upper bol' 2170s.

For now.. this is getting marginally frustrating, even though the broader trend was always expected to be higher into August. 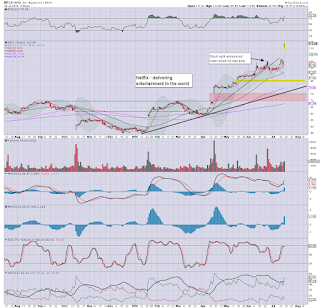 --
time for a cool drink.. or something
Posted by Trading Sunset at 16:53:00
Email ThisBlogThis!Share to TwitterShare to FacebookShare to Pinterest

US equities are holding moderate gains, having broken a new cycle high of sp'2121, a mere 13pts shy of a new historic high. VIX is attempting to floor from 11.97, a daily close in the 13.30s or higher would be some hope to the bears that the market will cool (at least somewhat) into the weekend. 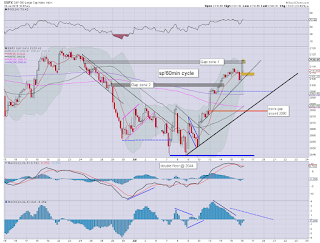 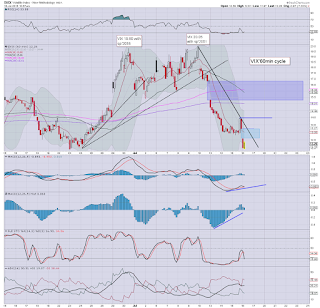 *keep in mind... Yellen is due this afternoon at 2.30pm EST, and that will likely continue after the market close.
--

Well, its the 11am hour...  its getting somewhat tiresome again, with the market higher for the 5th of 6 trading days.
-

-
time for an early lunch
- 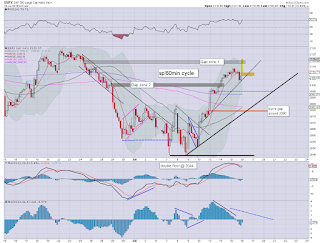 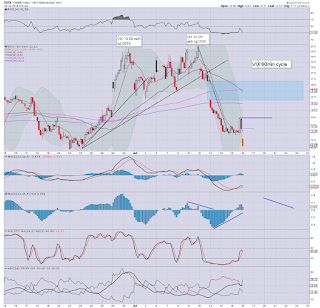 So.. we're higher.. at the upper gap zone. Above sp'2120 and there really isn't anything until the recent historic high of 2134.

Right now.. its not looking great for those seeking a retrace. 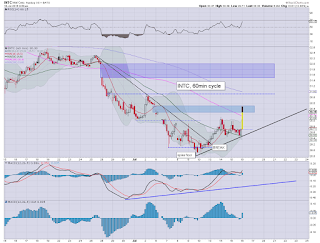 Keep in mind that INTC was trading in the low $32s in Wednesday AH action. Current price action is a major fail. with underlying earnings... lousy.
-

10.25am.. We're clearly seeing some initial resistance around the sp'2120 threshold... bears really need at least a minor net daily decline to offer some hope of 'weakness into the weekend'.

VIX early floor of 11.97.. a full 2pts below yesterday afternoons high. Urgh.
Posted by Trading Sunset at 14:52:00
Email ThisBlogThis!Share to TwitterShare to FacebookShare to Pinterest 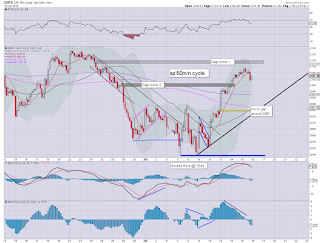 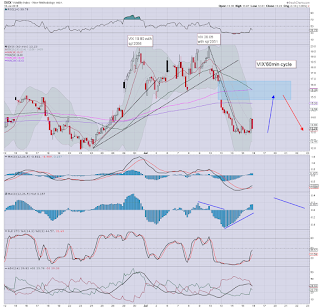 *important note. The Yellen will be talking to the US Senate today at the unusual time of 2.30pm.. rather than 10am.  I would imagine that will drag on into the market close, probably to 5pm EST.
--

So... we're set to open higher.. above yesterday's high, and now its a case of whether this market melts upward into the weekly close, or if we see a swift reversal.

I would still guess we have a high opportunity of retracing lower... at least to the 2090s... but with a rather attractive micro gap around 2080.. which in theory would equate to VIX 15/16s.
-

--
Overnight China action: Again, the volatility continues to lessen, with the China market seeing early weakness to 3688, but settling +0.5% @ 3823. Renewed weakness for a day or two seem probable, before another lunge higher back above 4K.. to the 4400s in August.

*I remain long VIX from 12.92. I'd guess we'll be trading under that this morning... but there still appears a fair chance of seeing at least the mid 14s by the Friday close. As ever, I'd prefer an exit into the weekend.

Have a good Thursday
-

9.00am.. Draghi is battling against questions from the media hacks about the Greek bailout'3.

Eyes on the prize

It was a mixed day for US equities, with a new cycle high of sp'2114, but settling -1pt @ 2107. Further weakness looks due to the 2090/80 zone - with VIX 15/16s, and then renewed upside into August. The real prize for the equity bears though is likely coming within the mid-August-early October time frame. 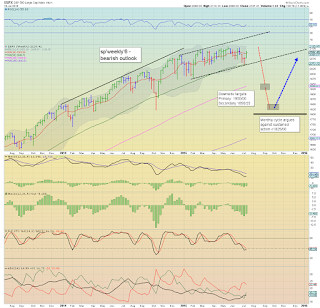 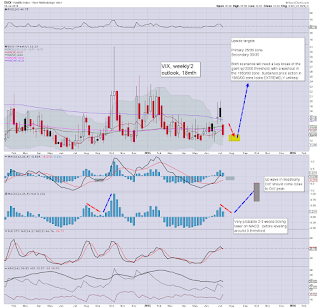 A somewhat tiresome day.. ending with yours truly seeing INTC soar on earnings..having exited (long) yesterday. I suppose it could have been worse, I could have flipped to the short side.

However, it will be day'2 of the Yellen, this time talking to the US senate. 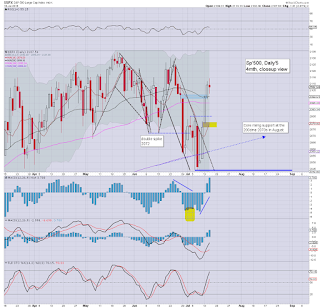 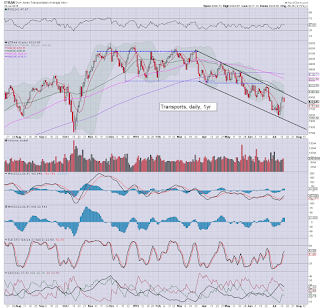 There remains high probability of the sp'2090/80 zone before the weekend... and that should equate to VIX 15/16s. From there, market should have opportunity to break new historic highs in at least some indexes.. before rolling over by mid August.