After some early weakness, most US and world equity indexes built gains across August, ranging from a very powerful 9.8% (Brazil), 3.2% (USA - Dow), to -1.3% (Japan). The outlook for September is for continued upside. 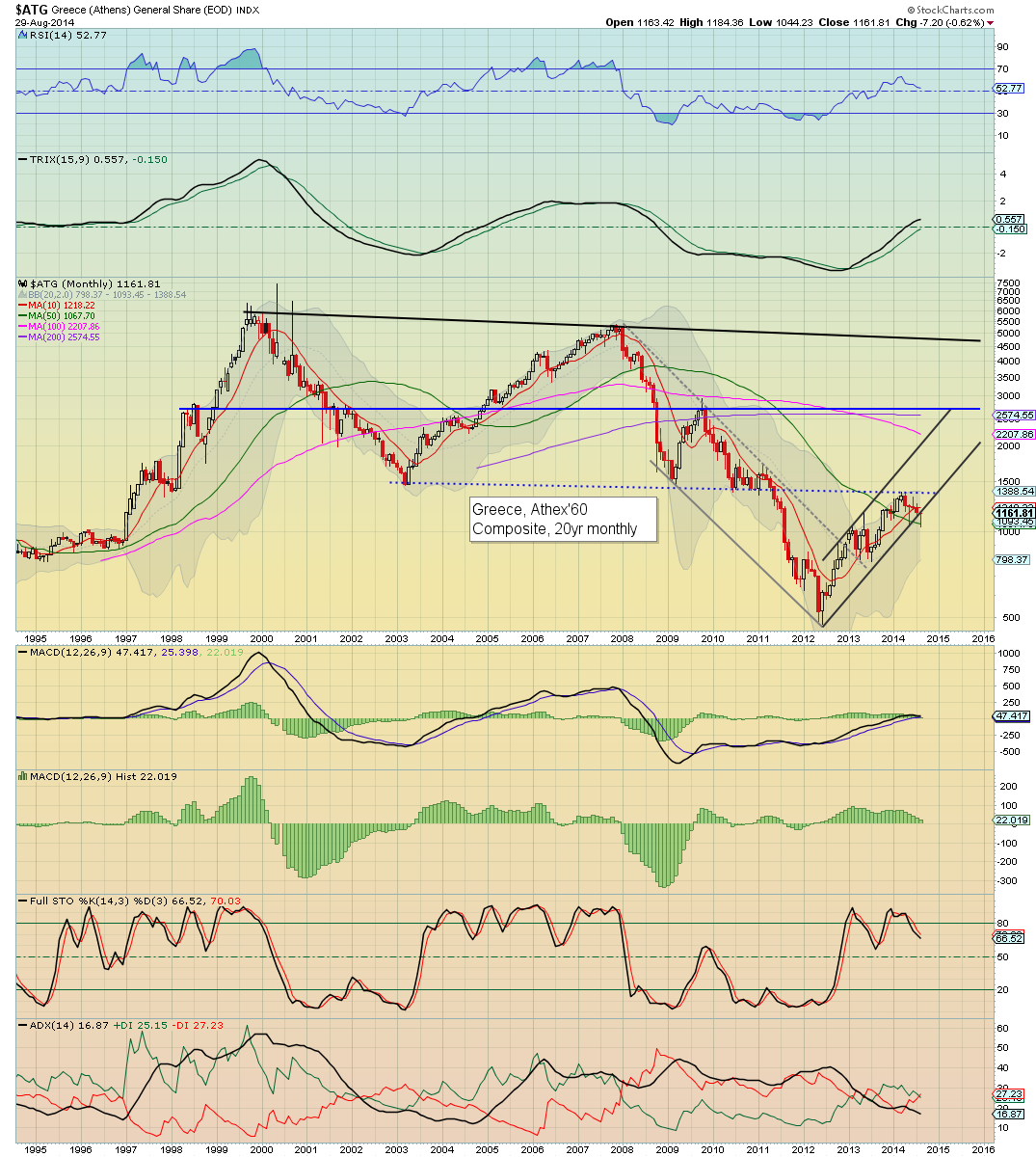 The Athex was fractionally lower for August, but notably, around 9% above the intra-month low of 1044. Price structure since the start of the year is a rather large bull flag, although there remains strong resistance in the 1300s. 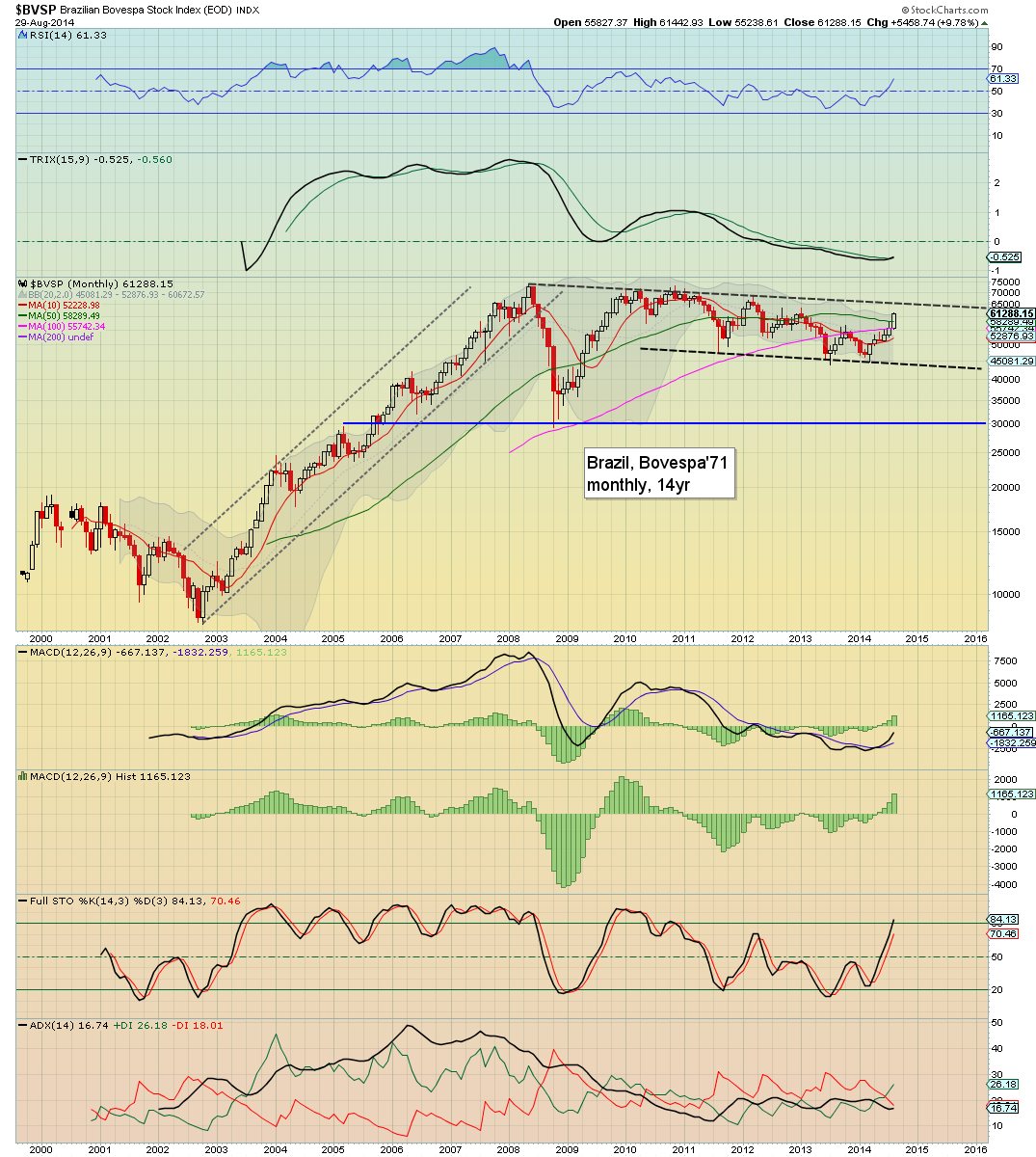 The Bovespa soared a very powerful 9.8% in August, breaking into the 60,000s. Next resistance is around 65k, which makes for a clear 5% of near term viable upside. 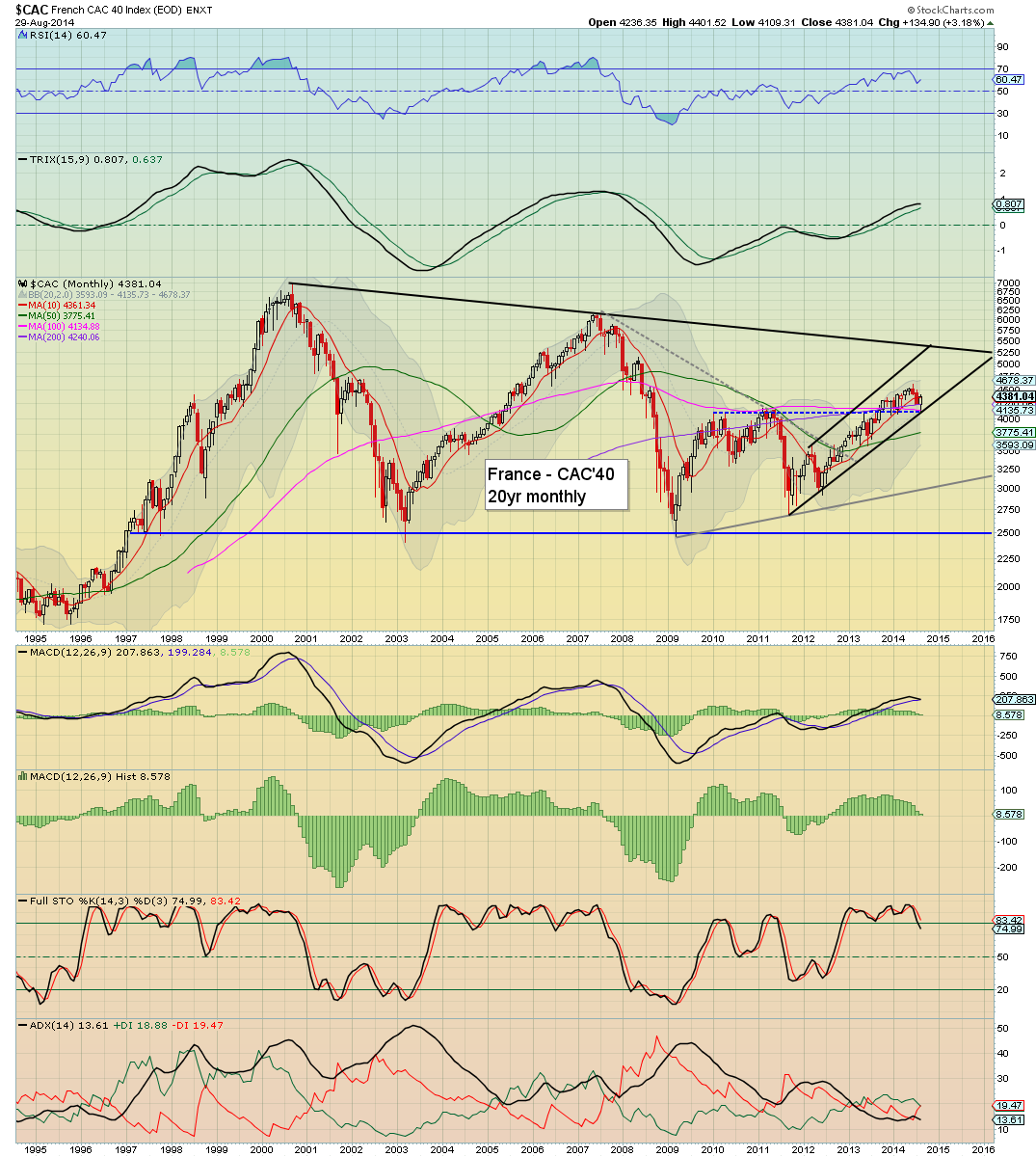 The CAC gained a somewhat impressive 3.2%, having held the somewhat important 4100s. There is viable upside to the giant 5k level within 3-5 months. Equity bears seeking a major intermediate top need a clear break <4k, but that sure doesn't look likely in the immediate term. 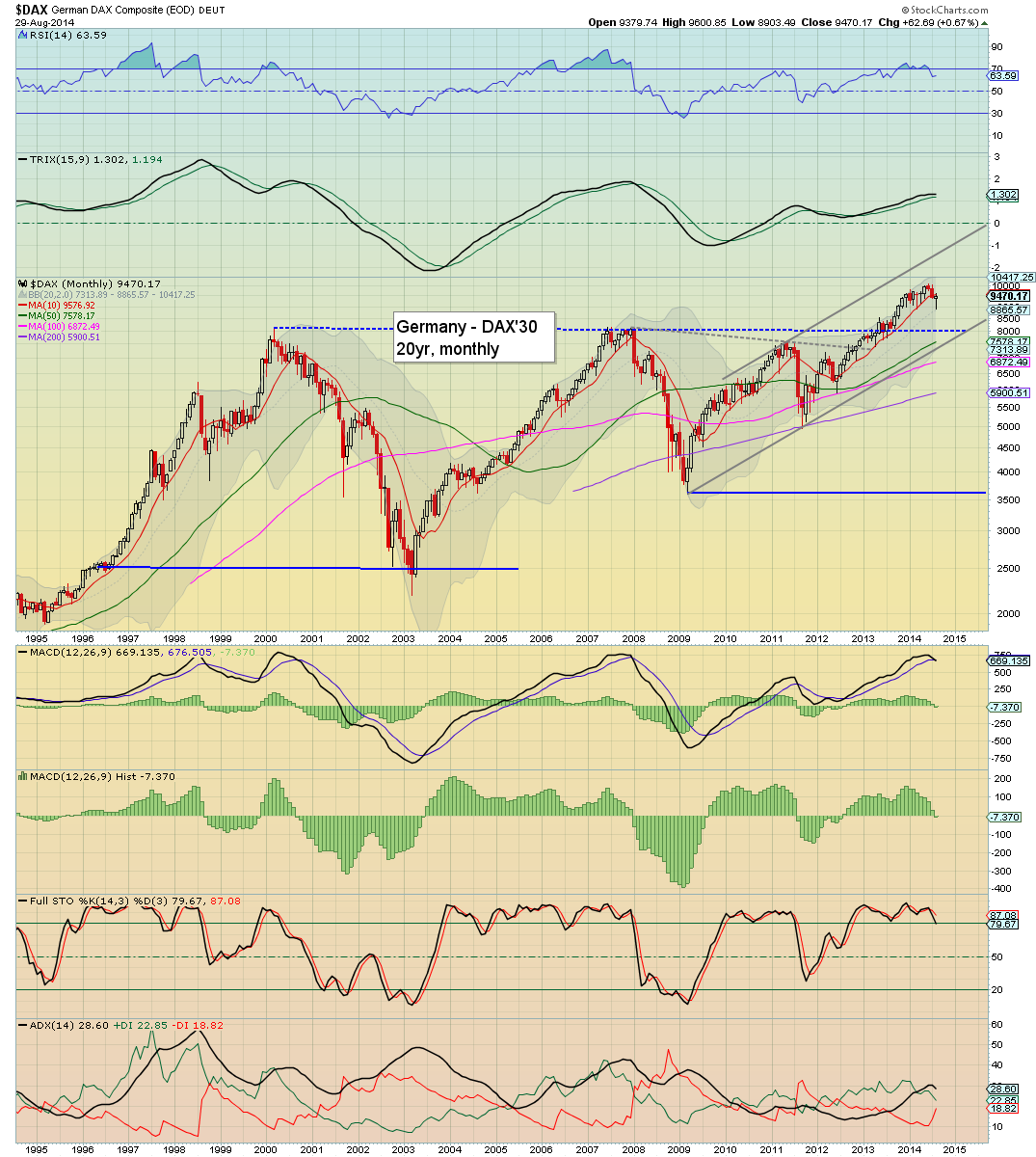 The economic powerhouse of the EU gained just 0.7%. However the monthly candle is a somewhat bullish spike-floor. The 10000s look viable in September, with 10500 by Oct/Nov. 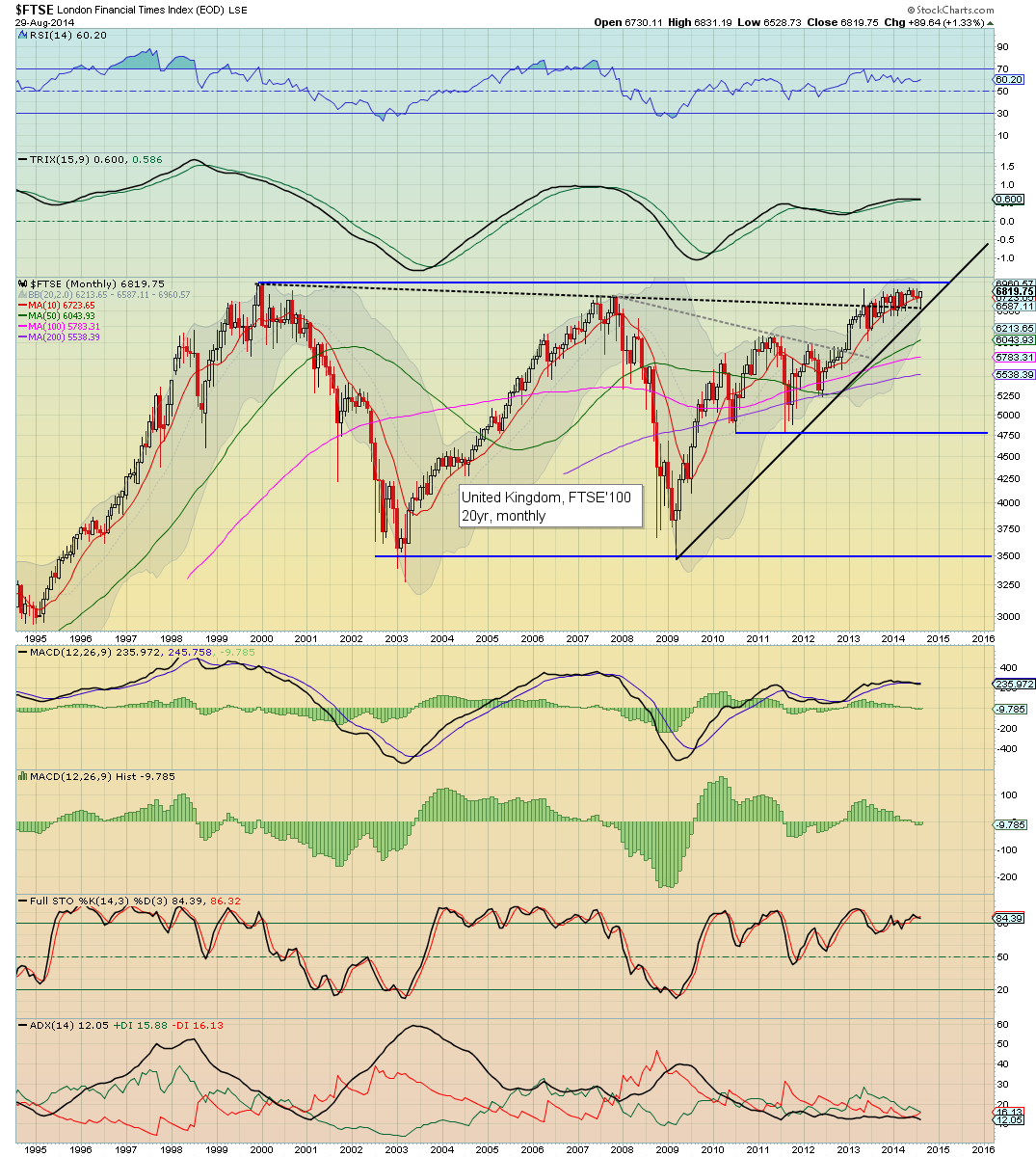 The UK market clawed 1.3% higher, and held above the old resistance/trend that stretches all the way back to late 1999. It is notable that the UK market is yet to break the historic high of 6950. A break into the 7000s would be highly suggestive of a charge to 10k by the end of the current multi-year equity cycle. 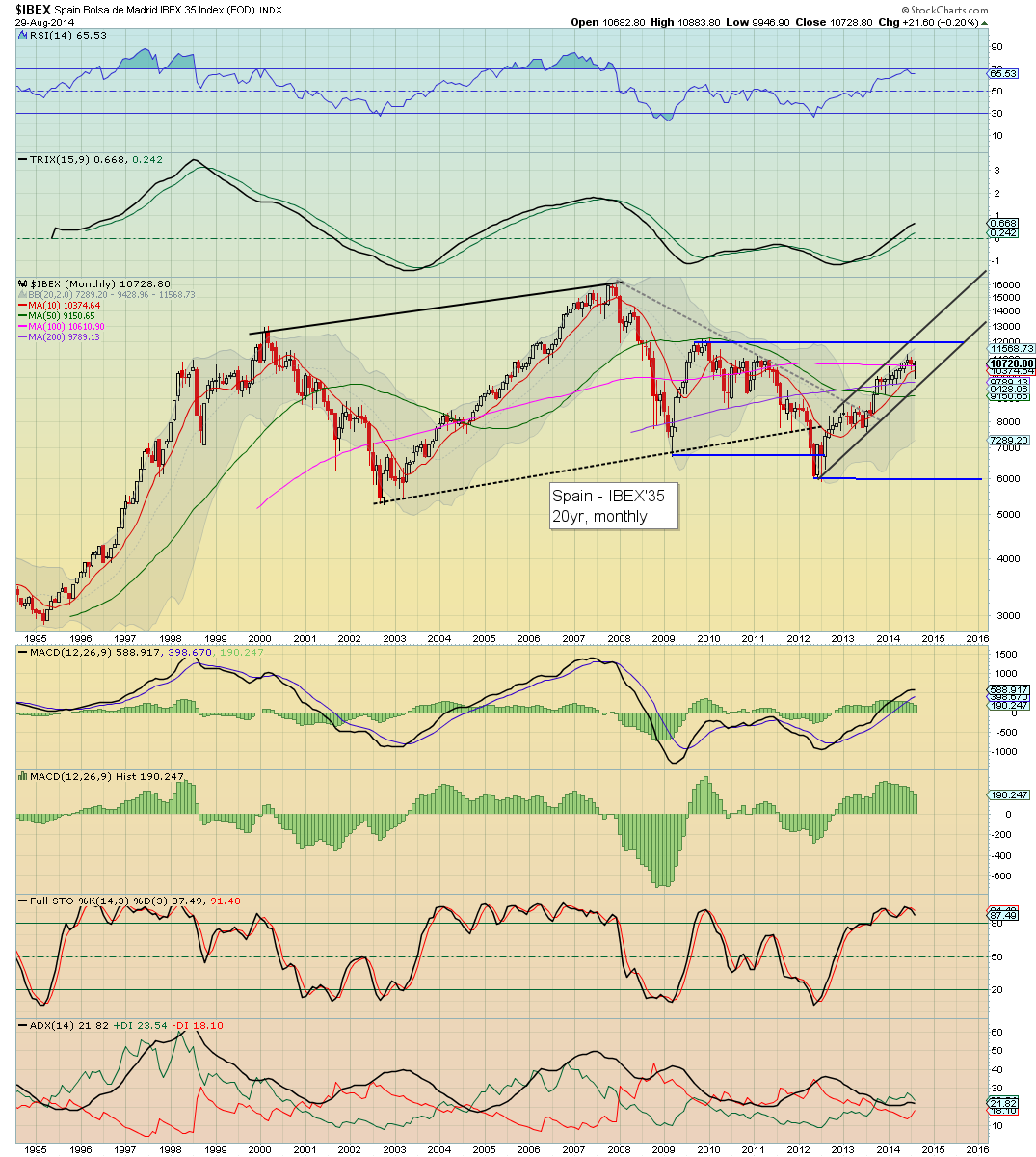 One of the major EU PIIGS, Spain struggled in August, with a fractional net gain of just 0.2%. However, like many other indexes, the monthly candle was a rather bullish spike floor, and it bodes for September upside. Next level is 12k, and that is around 13% higher. 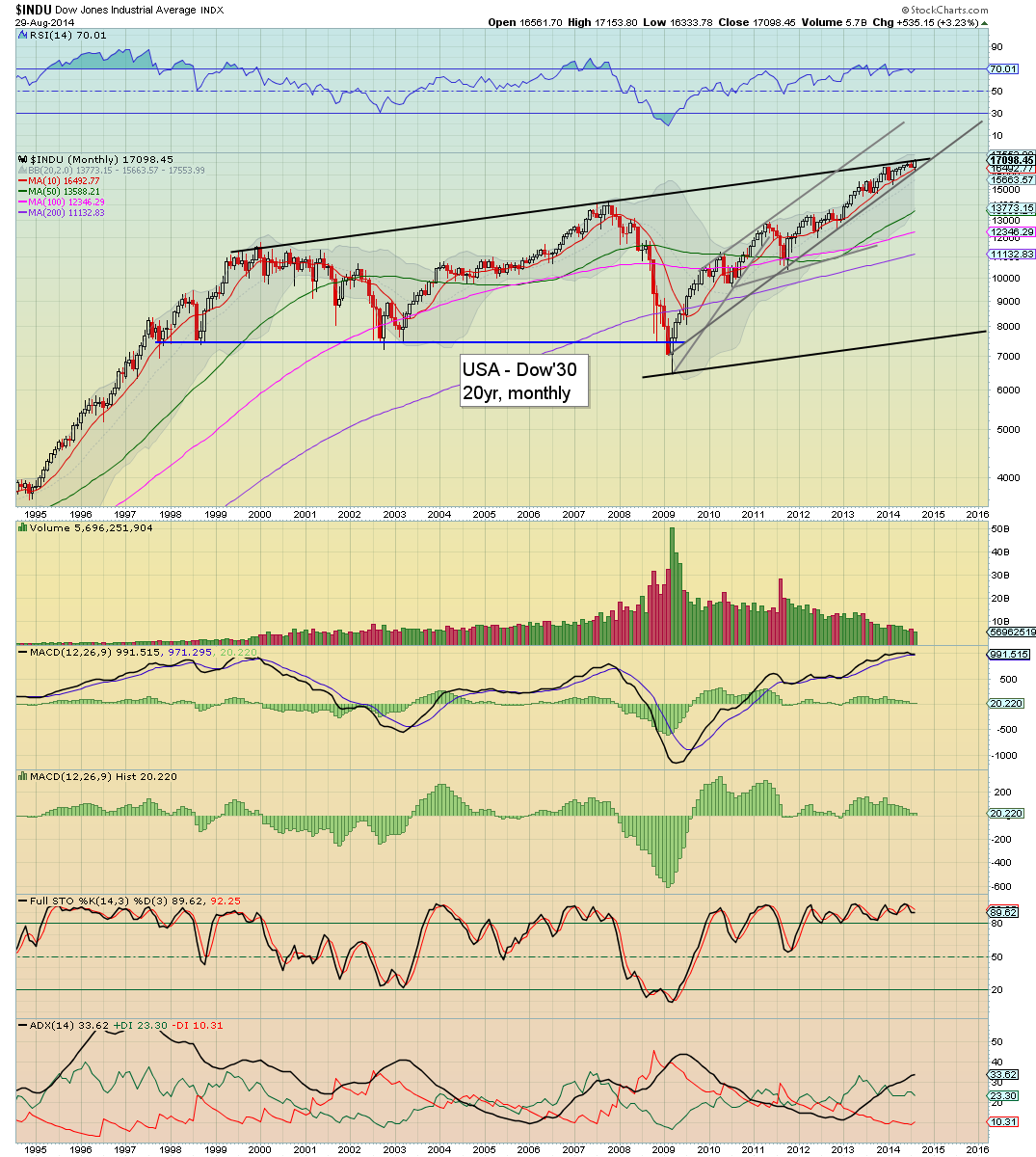 The mighty US Dow gained 535pts (3.2%) in August, having fractionally broken a new historic high of 17153. Upper bollinger is offering the 17500/600s in September. It is notable that by end year, the lower boll' will provide core support around 14k. Under no mid-term outlook is the market likely to be trading <14k 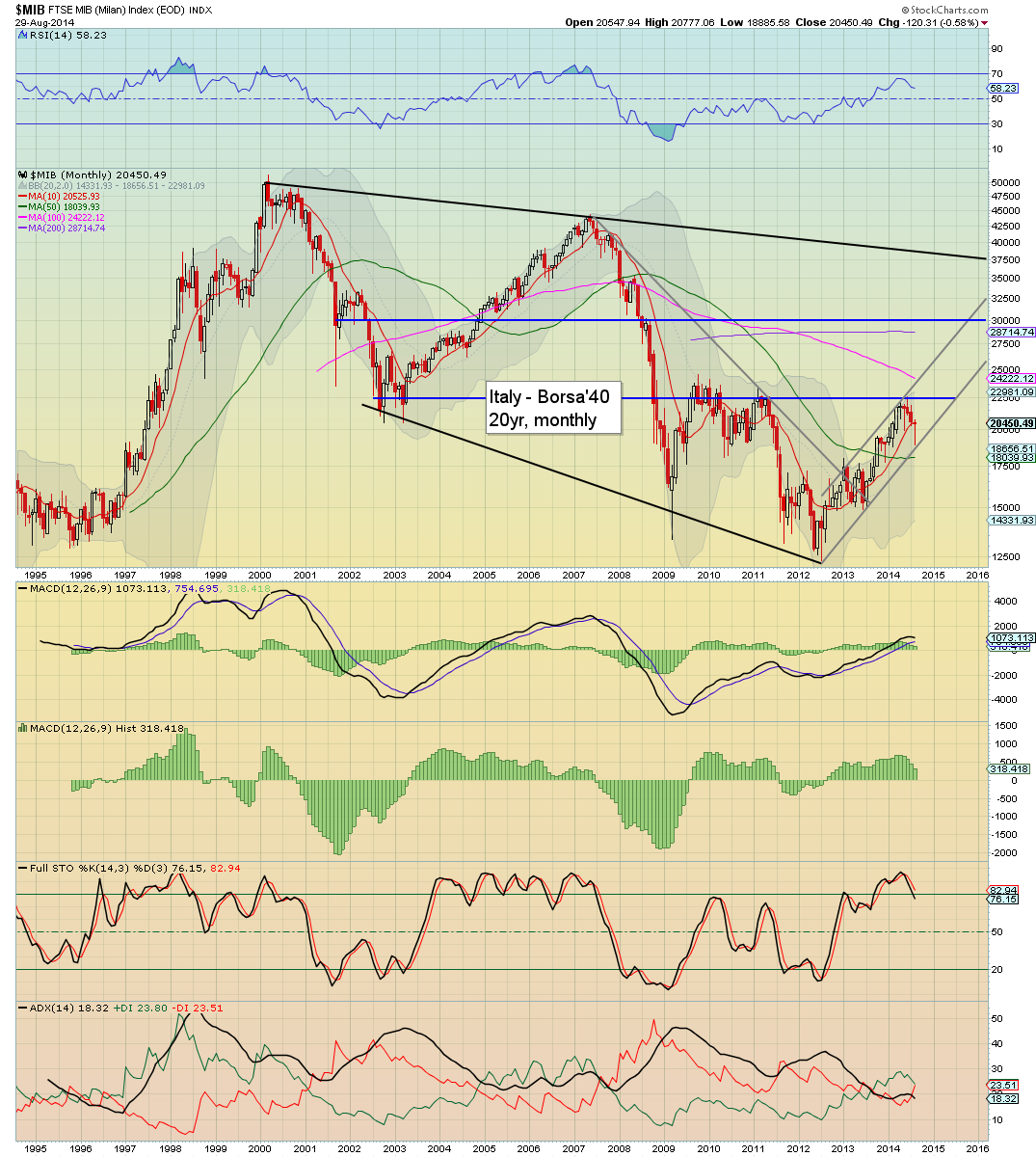 The Italian market saw a net monthly decline of -0.6%, but that was a clear 8% above the intra-month low. The monthly candle was a spike-floor, and is offering upside in September.
Best case upside looks to be around 23k, some 12% higher. 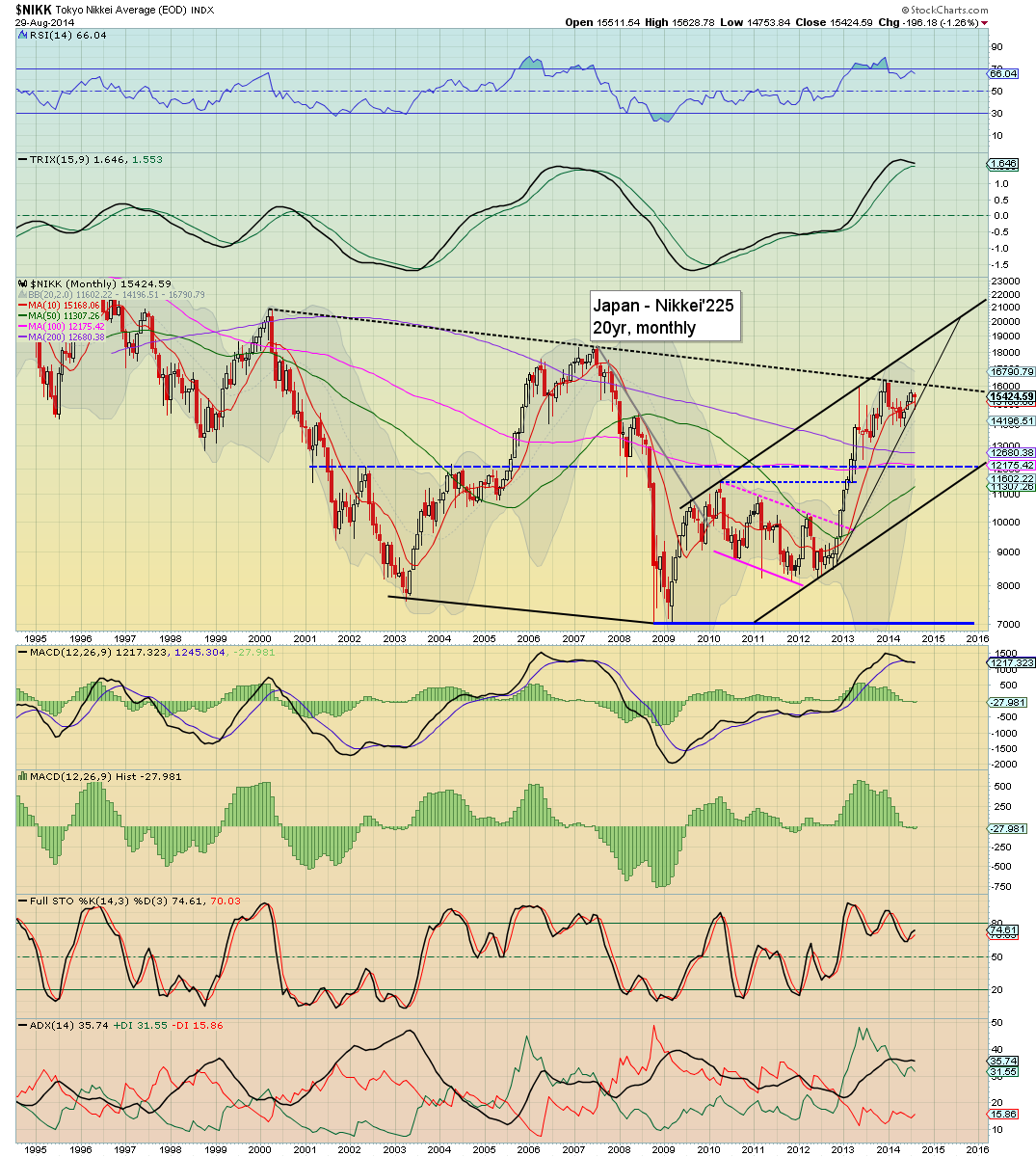 The Japanese market remains weak, slipping -1.3%, and is still stuck under the declining resistance that stretches back some two decades. Underlying MACD (green bar histogram) cycle remains negative for a second month. 16k remains a huge level for the bulls to break & hold over. 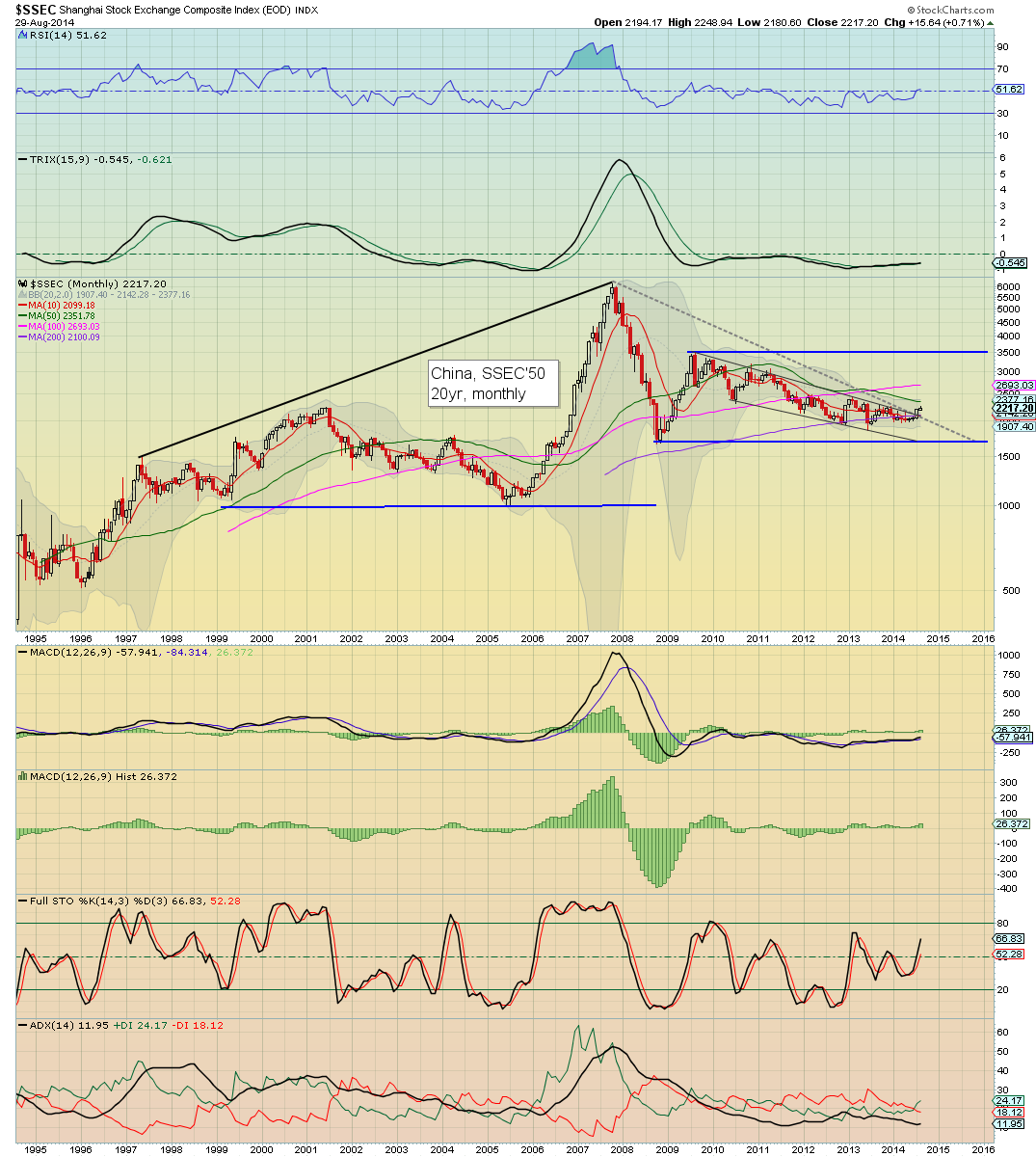 The Shanghai market only gained 0.7% in August, but it was the fourth consecutive monthly gain - the best run since late 2010. The broader downward channel has been broken, and there looks to be near term upside of a further 5% to 2375. Any monthly closes above 2500, should clarify that 3500 - back to the mid 2009 'post crash bounce', is due.

Despite some weakness in early August, all world indexes saw a very significant rebound into end month. Perhaps most notable, there were quite a few spike-floor candles, which certainly are suggestive of further upside into September.

Unless equity bears can break the early August lows, there is little reason to be particularly bearish for the remainder of the year.

It will of course be a shortened week, with the US market closed on Monday.

There are a few Fed' officials speaking across Thur/Friday, and as ever.. Mr Market will be listening, notably... Plosser (Fri' morning).

Back on Tuesday :)
Posted by Trading Sunset at 17:00:00
Email ThisBlogThis!Share to TwitterShare to FacebookShare to Pinterest 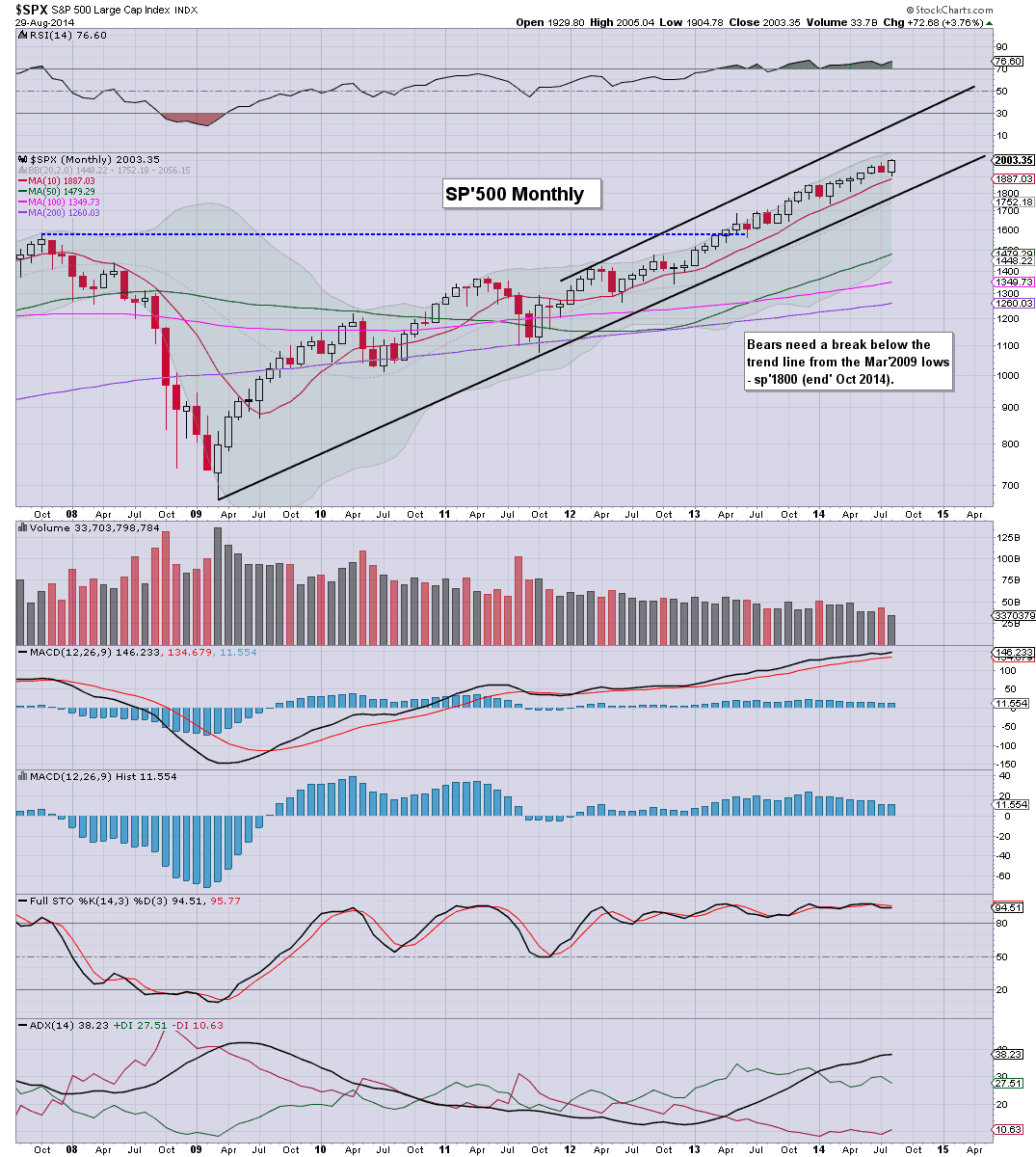 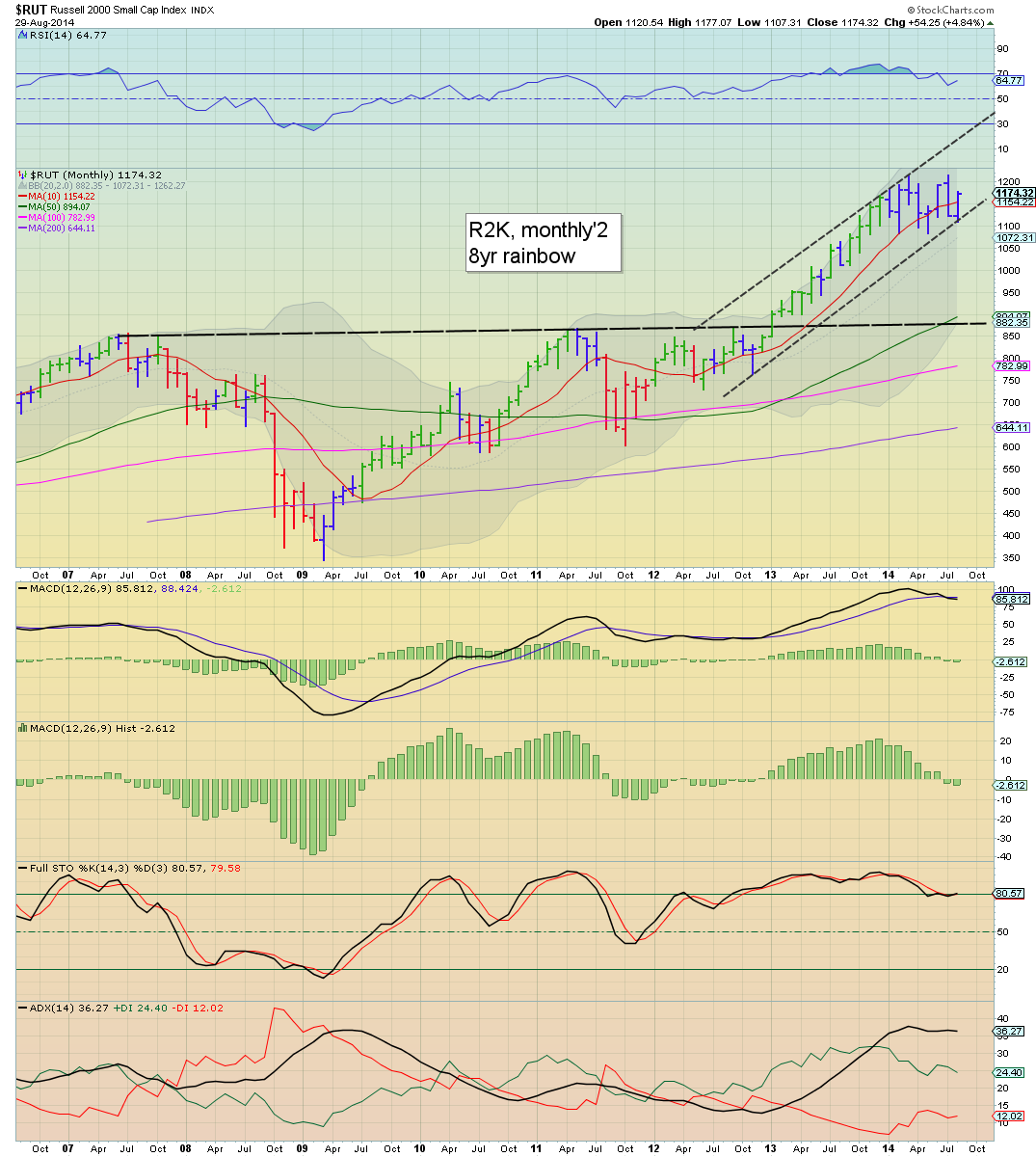 Unquestionably, it was a month for the equity bulls. Even the laggy R2K saw rather powerful gains of 4.8%.

With bullish engulfing candles on many of the monthly charts, the outlook for September is bullish.. at least to the 2020s, if not the 2030/50 zone.

For me, the only issue is whether the 2100s are coming, before some form of major intermediate correction (on the order of 15% or so). Right now, that is too hard to call, we'll have a much better idea by late September.

Goodnight from London
---
*the weekend update will be on the World monthly indexes
Posted by Trading Sunset at 04:00:00
Email ThisBlogThis!Share to TwitterShare to FacebookShare to Pinterest 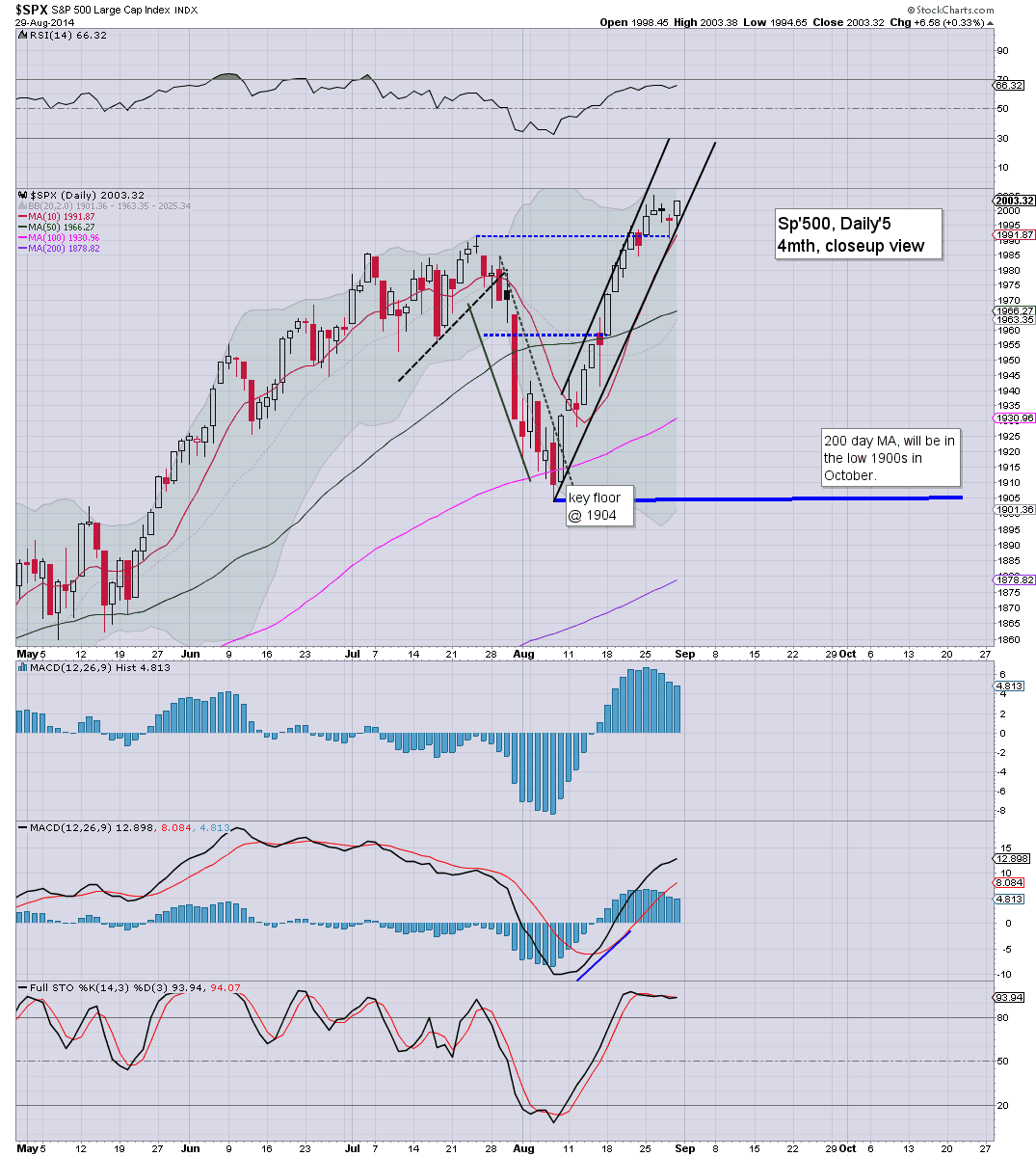 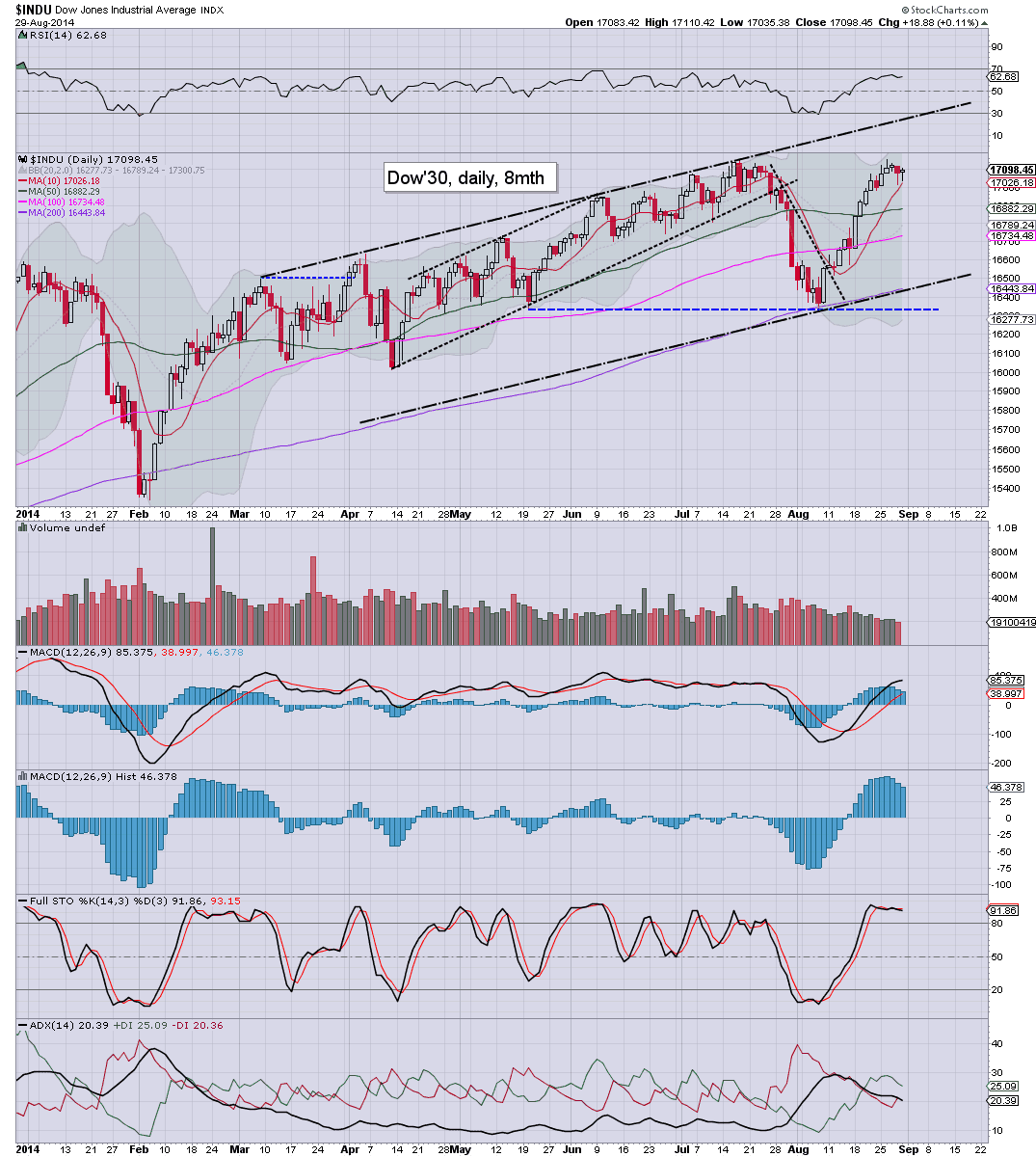 A bullish month...a bullish week...and most indexes even managed some tiny gains to end the week.

There is clearly some way to go to test the upper channel on most indexes, probably another 2-3%.
-